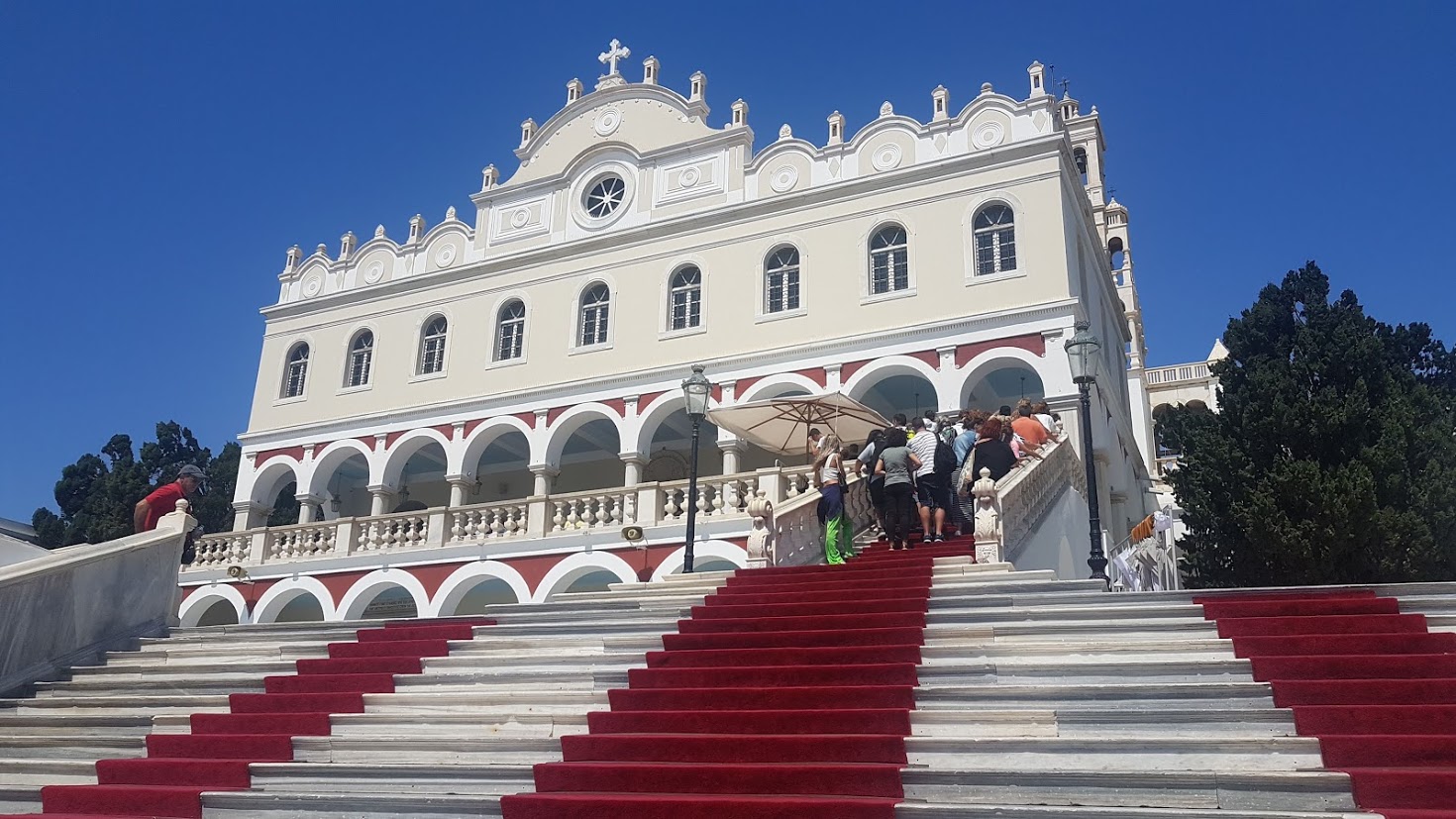 Our Lady of Tinos Church is one of the best known sites on Tinos island in Greece. Here’s a guide to the famous church of Panagia.

The island of Tinos is an up and coming destination among foreign visitors. It’s located in the Cyclades, close to the popular Greek islands of Mykonos and Santorini. 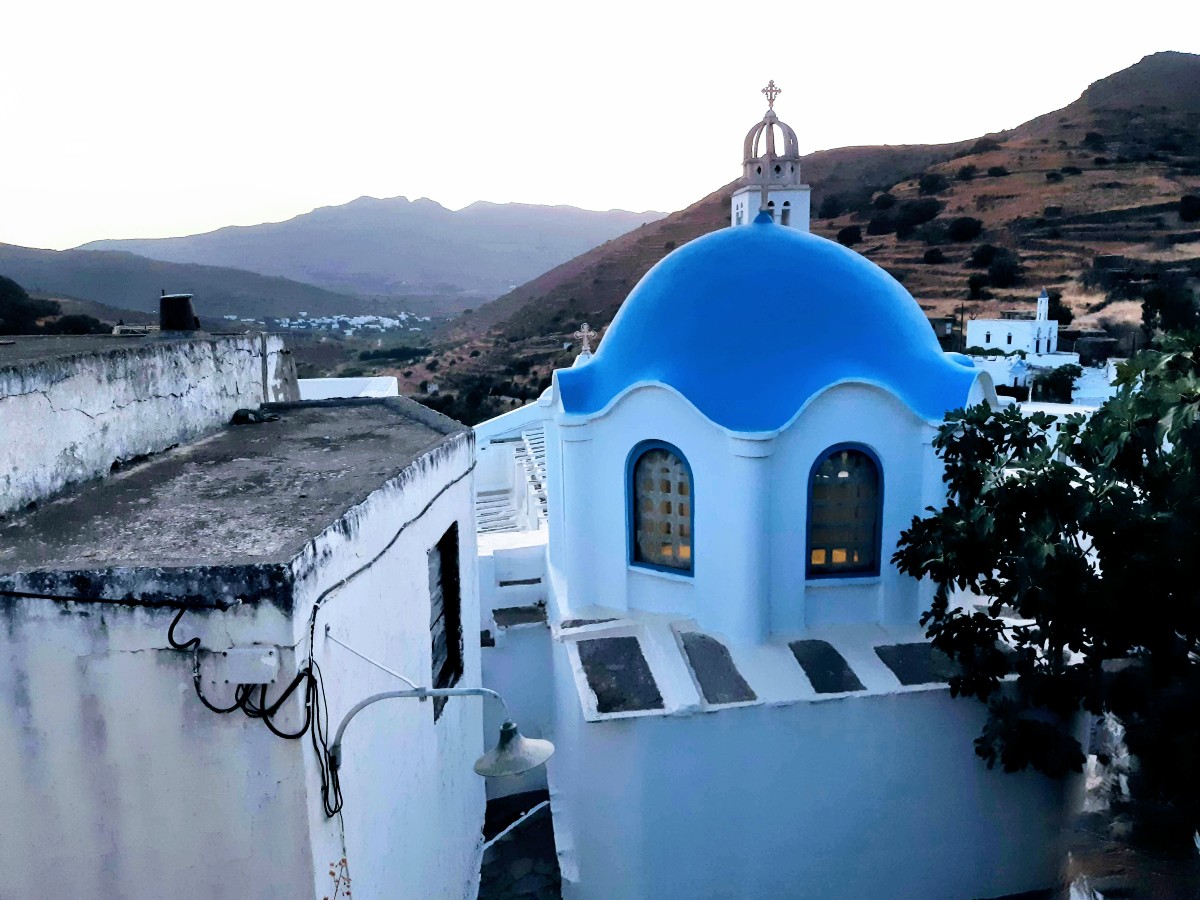 Tinos has beautiful beaches, unique landscapes and dozens of incredible, quaint villages. In addition, it is home to several hundreds of chapels, churches and monasteries. This includes the Panagia Evangelistria, one of the most iconic churches in Greece.

Among Greeks, Tinos is known as a religious island. Many Christians make a pilgrimage to the famous church of Panagia once in their lives. Here is everything you need to know about the iconic landmark.

Our Lady of Tinos Church

Our Lady of Tinos church is located in the port town, Chora. In Greek, we call it “Panagia Evangelistria”, “Megalochari” or “Panagia tis Tinou”. Panagia is the word we use for the Virgin. 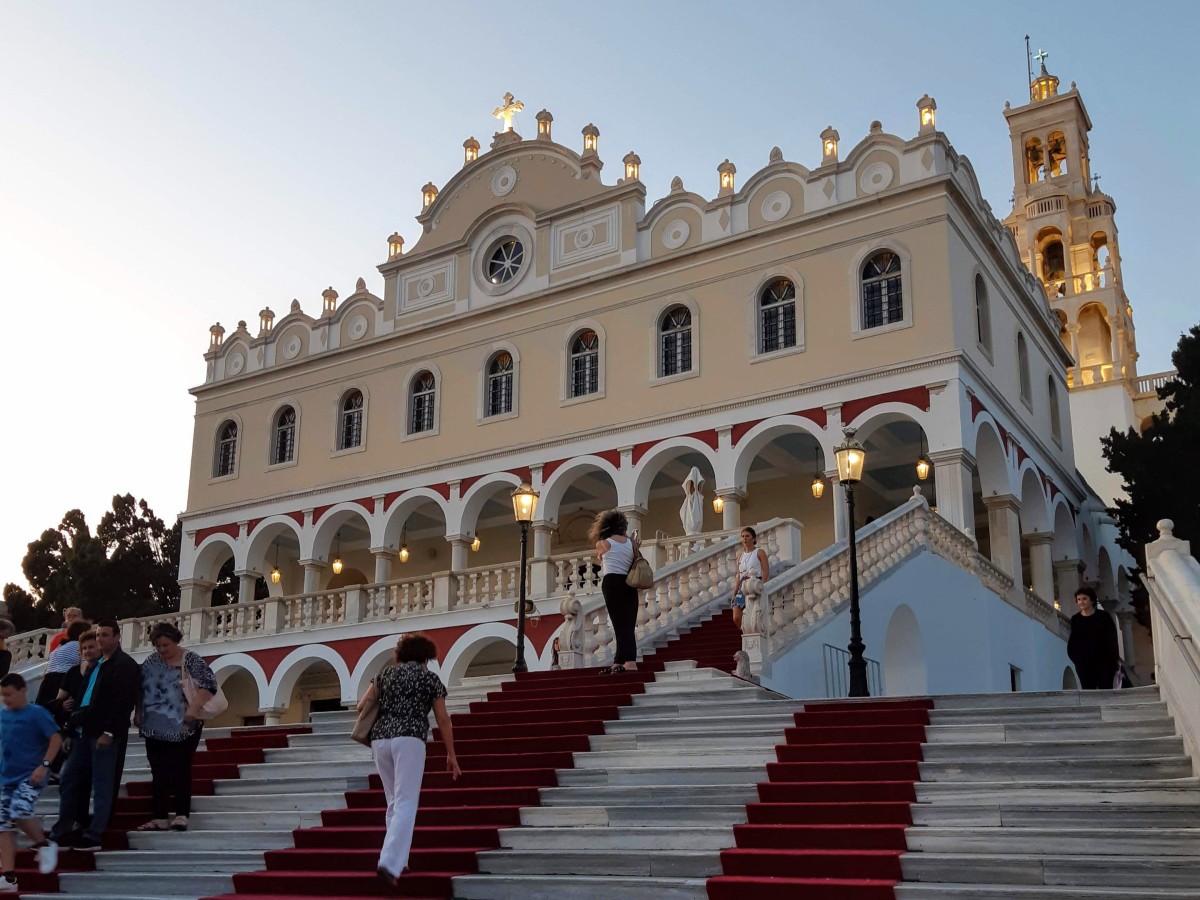 The Megalochari is a major pilgrimage center for Greek Orthodox Christians, attracting people from all over the world.

The Panagia Evangelistria celebrates a few times per year. The most important date is the Dormition of the Virgin, on the 15th of August. Thousands of people visit to pay their respects, and maybe ask for a wish to be granted.

Like many churches and monasteries in Greece, the church of Panagia has an interesting story.

In July 1822, nun Pelagia, who lived in Kechrovouni Monastery in Tinos, had three dreams of Virgin Mary. In the dreams, the Virgin explained that Her miraculous icon was buried in a field. She then asked Pelagia to organize the excavation of the holy icon and the construction of a church. 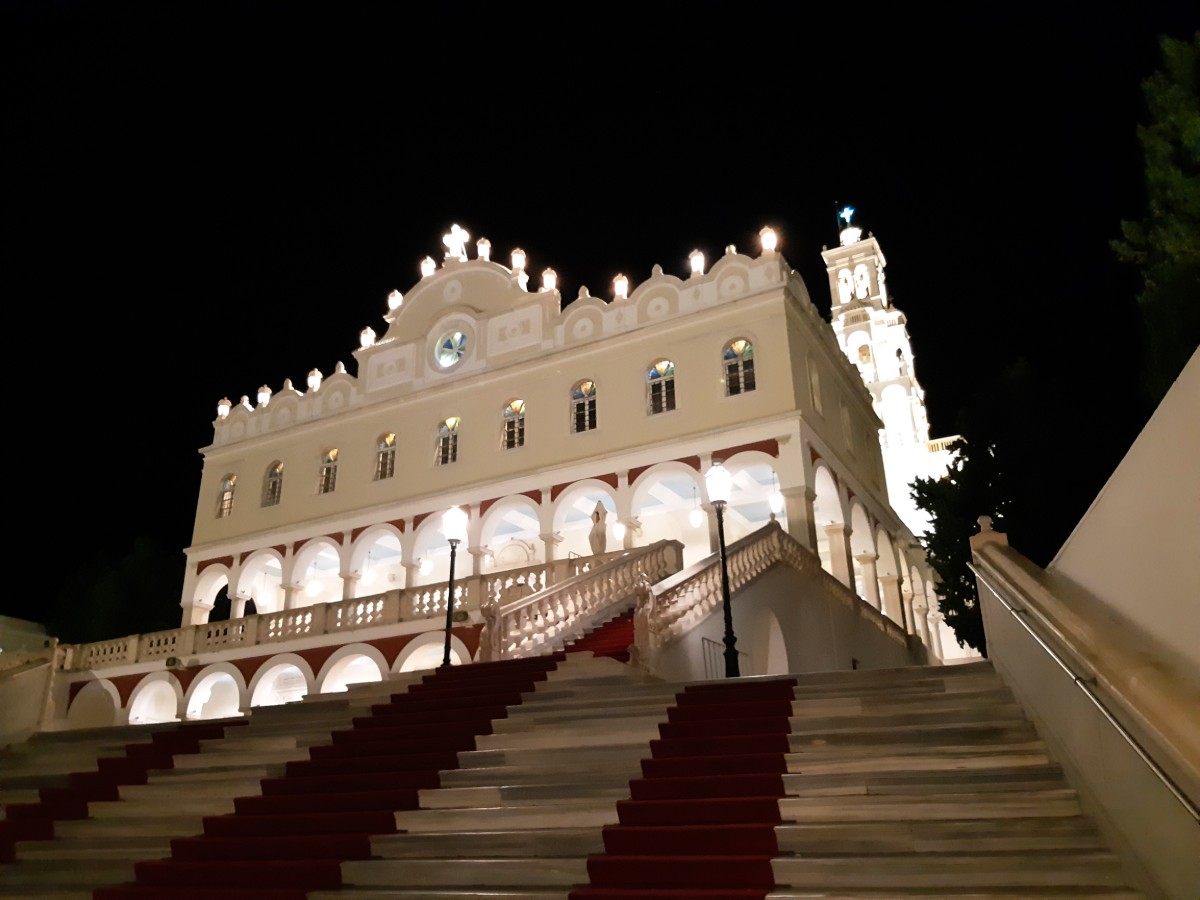 Soon afterwards, the procedures started. The Metropolitan Bishop, the local authorities and the people of Tinos were all involved in the search.

On 30 January 1823, the miraculous icon came to light. It depicted the Annunciation of the Virgin, with the Archangel Gabriel. Locals also discovered a spring of holy water on the site.

The icon was unearthed shortly after Greece’s Independence War against the Ottoman Empire. Its discovery was instantly received as a miracle, especially considering that the Cyclades hadn’t been liberated yet.

Discovering a Holy Icon was proof that the Revolution was happening for a just cause. It was also a definitive sign that the Cycladic islands were soon going to be part of Greece. 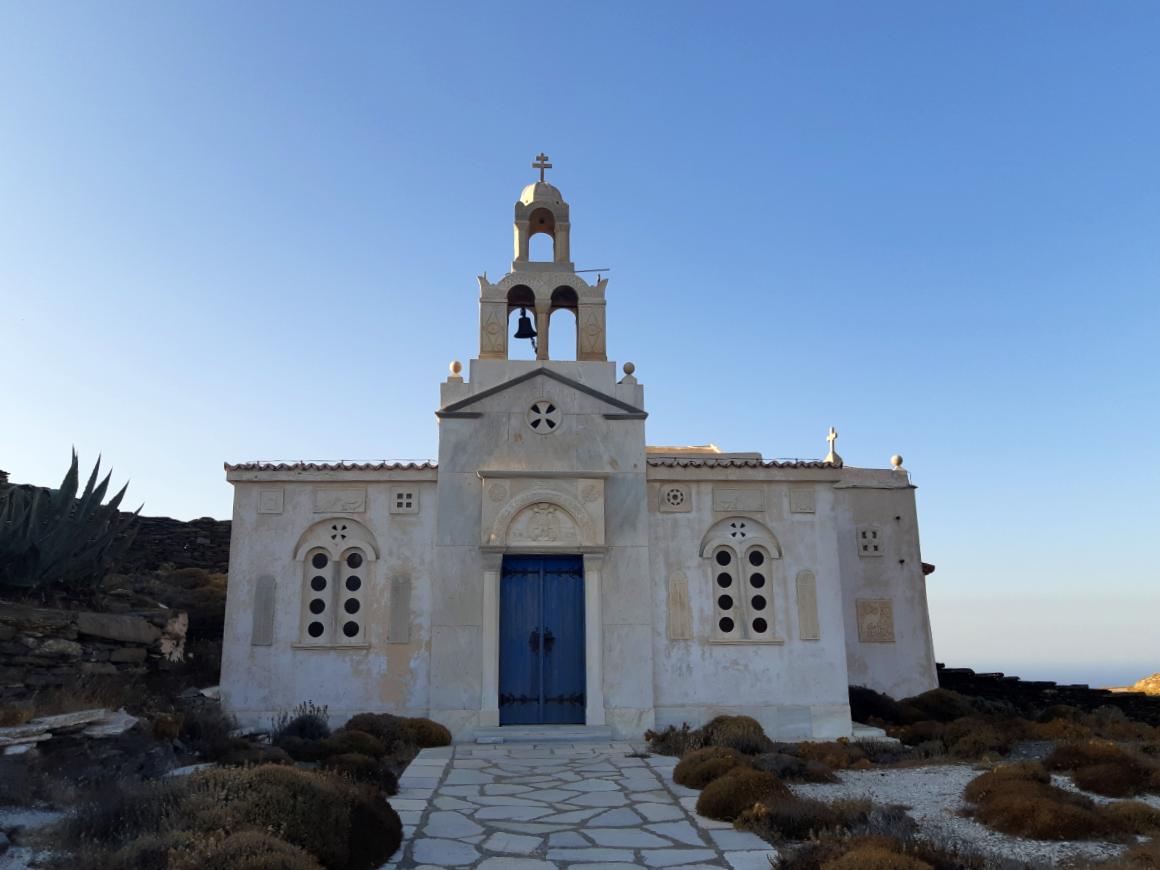 As the news broke out, people came from far and wide to worship the sacred icon. Several fighters of the Independence War also travelled to Tinos to pay their respects. These included Kolokotronis, Karaiskakis, Kanaris, Nikitaras and Miaoulis.

The Panagia Tinos church was built on the exact site where the icon was discovered. The materials used included marble from the nearby island of Delos. Tinos had many skilled marble workers, so there was no shortage of working hands.

The construction of the Panagia Tinos church was completed in 1826. The majestic courtyard was finalized several decades later, in 1880.

The Holy Icon inside our Lady of Tinos Church

Today, you will see the miraculous icon on your left-hand side upon entering the main church. You will also notice dozens of votive offerings, such as small metal plaques. 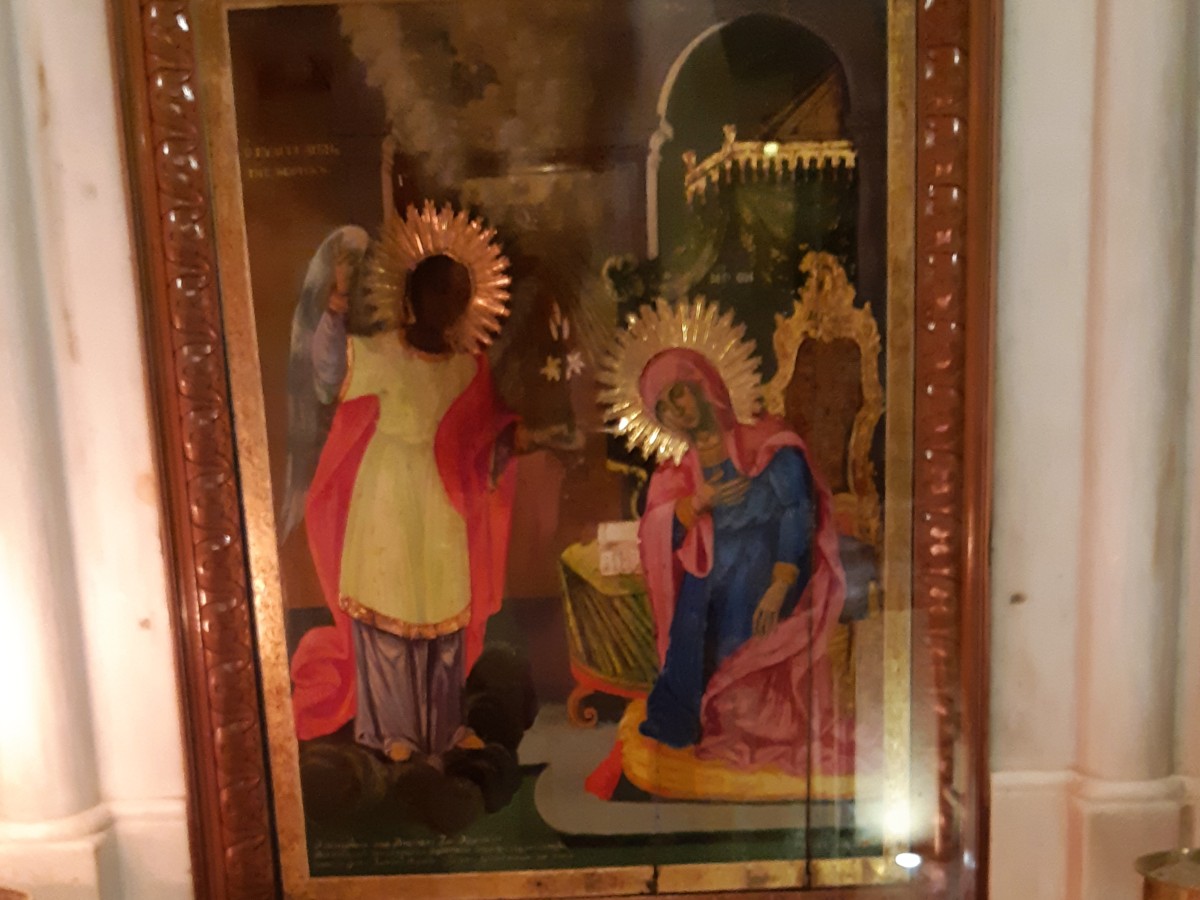 Many of these donations have been provided by people who experienced a miracle. All Independence warriors have also offered some of their personal belongings.

During the busiest times of the year, you will come across long queues of people waiting to go inside and pay their respects. The sacred water flows from a fountain inside the church, and many pilgrims bring a bottle to fill.

The Museums around Panagia Tinos Church

Inside the church complex, there are several rooms hosting important exhibitions. There are a couple of rooms on the ground level, and a few more on the fist floor. They are all free to visit, though sadly photos are not allowed.

Downstairs in the courtyard, there is a fantastic collection of Icons and Relics. This room contains several superb Byzantine icons, some of which are hundreds of years old.

On the ground level, you can also visit the Portrait Gallery, where you can see several paintings and portraits.

The rest of the exhibition rooms are upstairs. Arguably the most impressive one is the Sacristy. This room hosts an incredible array of ecclesiastical items, including silver objects and exquisite gold embroidery.

Many important Greek artists, such as Filippotis, Sohos, Lytras and Gizis, come from Tinos. The Museum of Tinian Artists contains paintings and sculptures by some of these prominent sculptors and painters. There is also a dedicated Antonis Sohos Museum, where you can see more works by the local sculptor.

The Elli Mausoleum in the Tinos Church of Miracles

Located next to the main church entrance, you will find the Elli Mausoleum. To appreciate this small monument, you would need to know the sad story behind it.

On 15 August 1940, on Dormition Day, thousands of people were in Tinos to honour the Virgin. At the time, Greece wasn’t yet involved in WWII.

Among the vessels participating in the religious celebrations was a Greek protected cruiser, named Elli. Out of the blue, an Italian submarine, Delfino, fired three torpedoes against the cruiser. One of them hit its target, resulting in 9 people being killed and 24 being wounded.

In order to avoid a conflict with Italy, the Greek government did not officially acknowledge the nationality of the submarine. Still, it was well known that it was Italian. After the war was over, Italy offered Greece a new cruiser, which was named Elli.

The small mausoleum in Panagia Tinou church was built in memory of the first victims of WWII in Greece. You can see a few objects that were on the original cruiser. 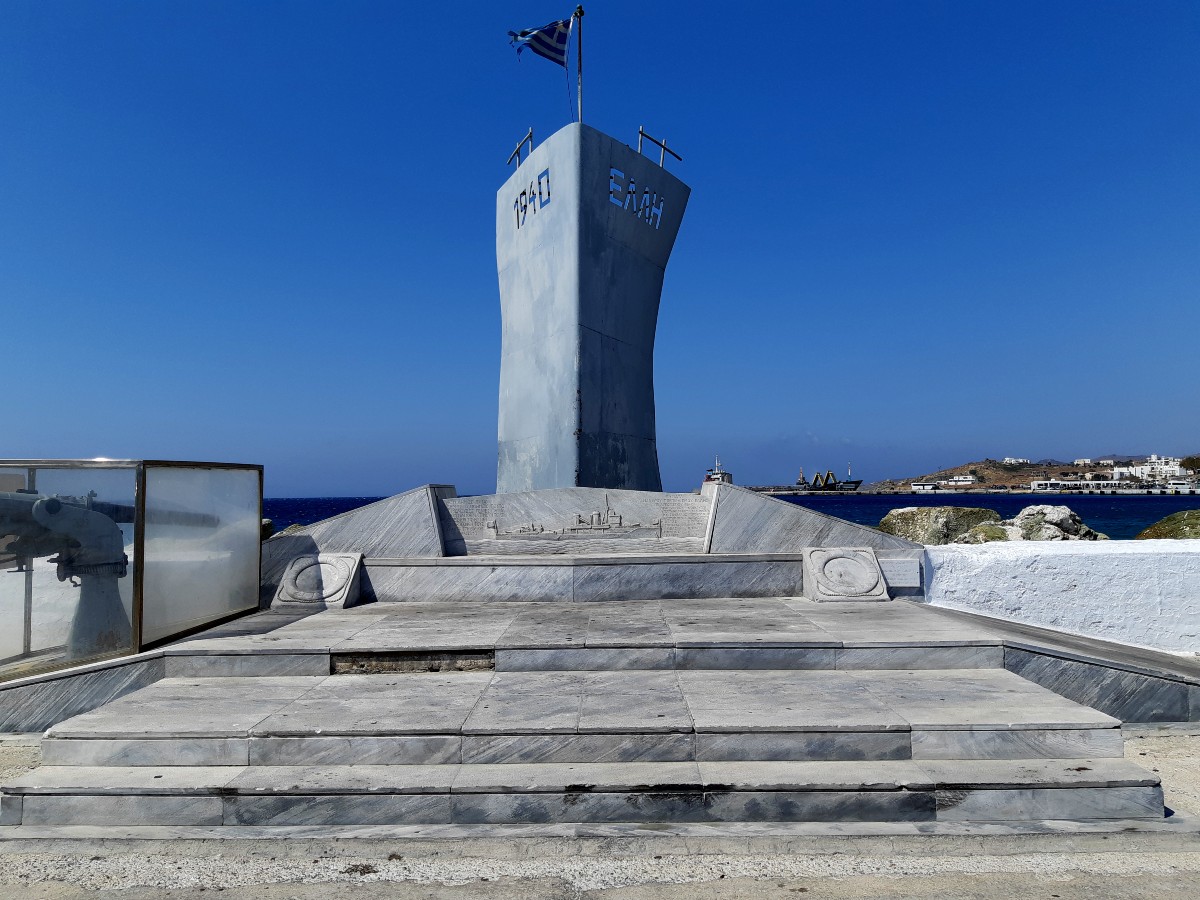 Down by the port, you can see another monument dedicated to the nine sailors who died at sea.

A Red Carpet for the Devout

The impressive church of Panagia is located up on a hill in Chora. You can’t fail to notice a long red carpet stretching across the town, all the way from the church entrance down to the port.

The carpet was installed for people visiting Tinos on a pilgrimage. After leaving the ferry, many of them head towards the church of Panagia on their hands and knees. 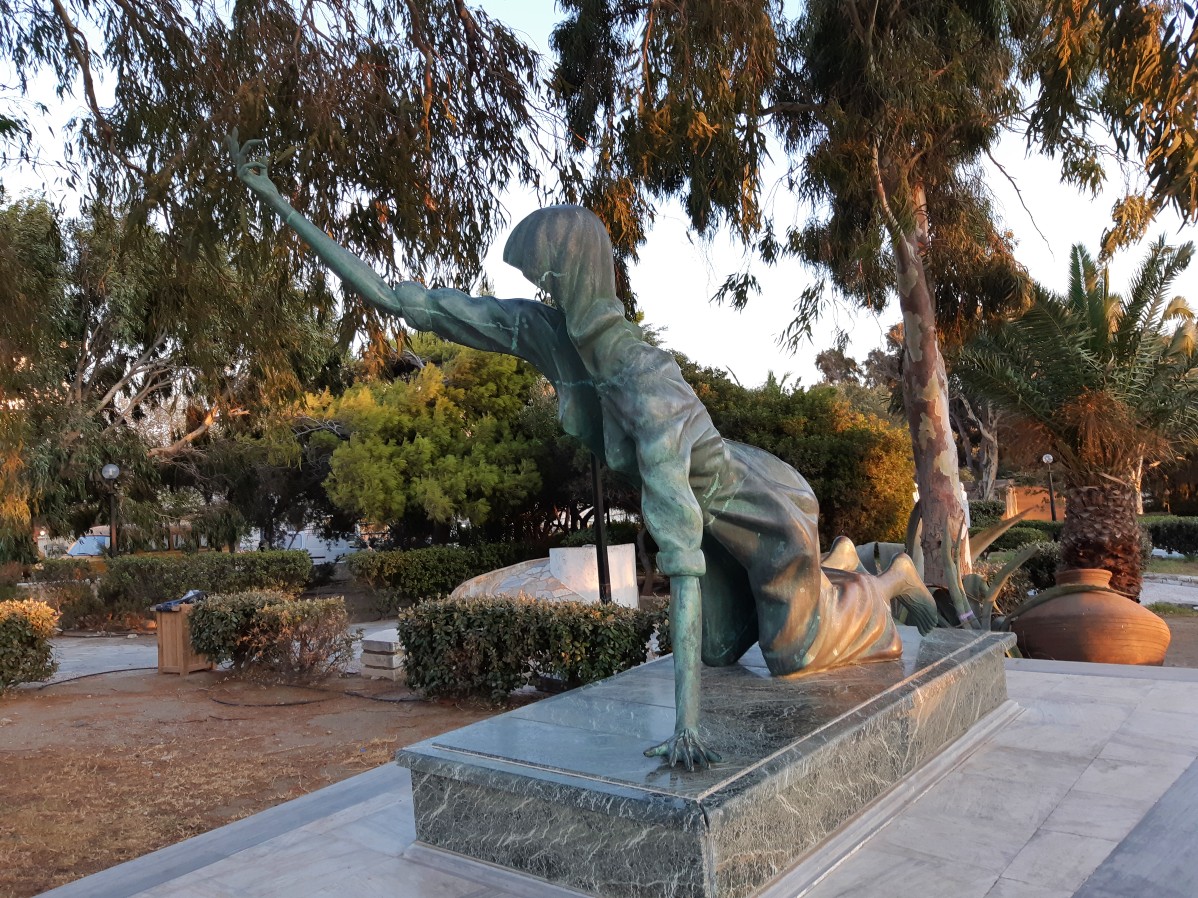 The Megalochari is open on a daily basis from early in the morning until late in the evening. It seems to be busier in the mornings, when some people visit on a day trip from Athens.

There are several souvenir shops around the church, where you can get copies of Byzantine icons. If you search around, you will find some icons of exceptional quality, decorated in gold. You can also buy small bottles, to fill with the Holy Water.

Special Celebrations at the Church of Virgin Mary

As mentioned earlier, the Megalochari celebrates a few times a year. Apart from the 15 August, other dates to remember are

On these dates, there is a mass and a ceremonial procession of the icon in Chora Tinos. On 22 July, the icon is transferred to Kechrovouni monastery, where Pelagia lived. It is kept there for 24 hours, and is then returned to Panagia Tinos.

Finally, like all churches in Greece, the Megalochari celebrates Greek Easter. There are special masses during all weeks of Lent. The most important ceremonies happen during the Holy Week.

Easter at our Lady of Tinos Church of Miracles

Greek Orthodox Easter is a unique religious and cultural event, celebrated in every single town and village in Greece. The events on some of the Greek islands, like Corfu, Chios and Tinos, are spectacular. 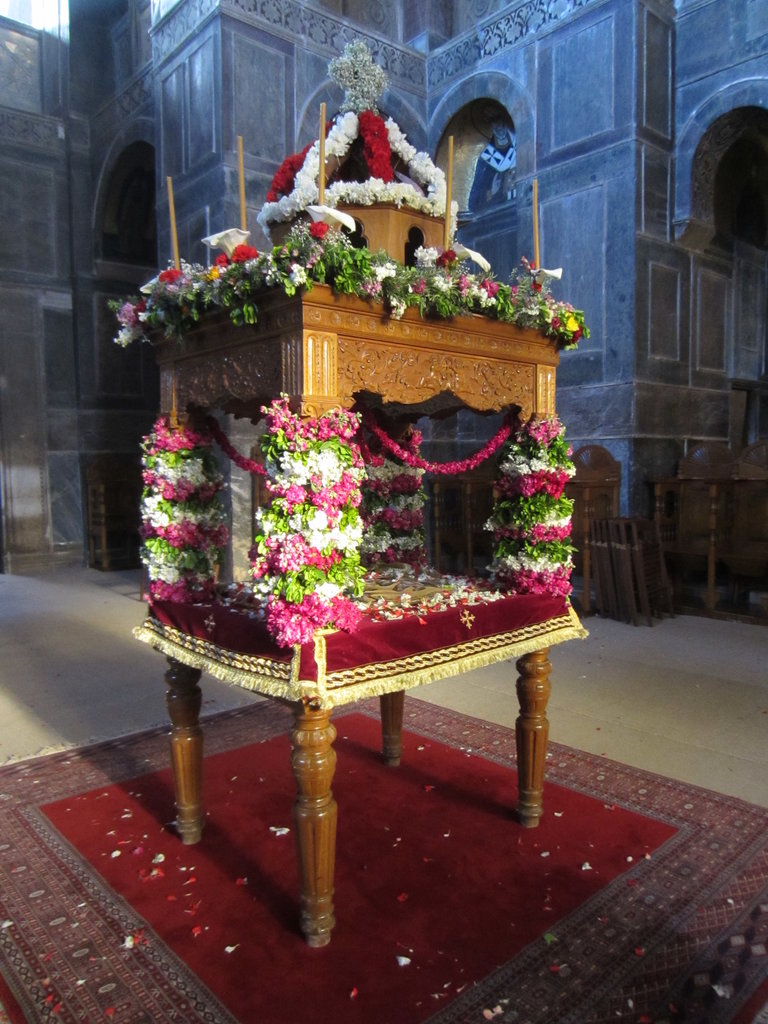 On the evening of Good Friday, people follow the Epitafios procession. It’s a solemn event, where everyone walks behind the Epitafios, a flower-clad representation of Jesus’ coffin. Like everywhere in Greece, the mass begins and ends in the church.

The midnight ceremony on Good Saturday, when the Resurrection happens, is an event of joy. Hundreds of people gather outside the church, expecting the Holy Light from Jerusalem. At midnight, the bells chime and the light spreads quickly among the congregation.

Here’s a little more about Greek Easter traditions. Includes everything you need to know about this major feast.

I hope that this article has shed some light on the Lady of Tinos church. If you have any questions, feel free to ask in the comments!

Hi! I am Vanessa from Athens, and I love helping people discover more about my country. The Cyclades are among my favourite Greek islands, and Tinos is simply amazing. You will fall in love with the villages, beaches, and all churches, monasteries and hundreds of chapels! For more information, check out our Real Greek Experiences guide book about Tinos and Andros! 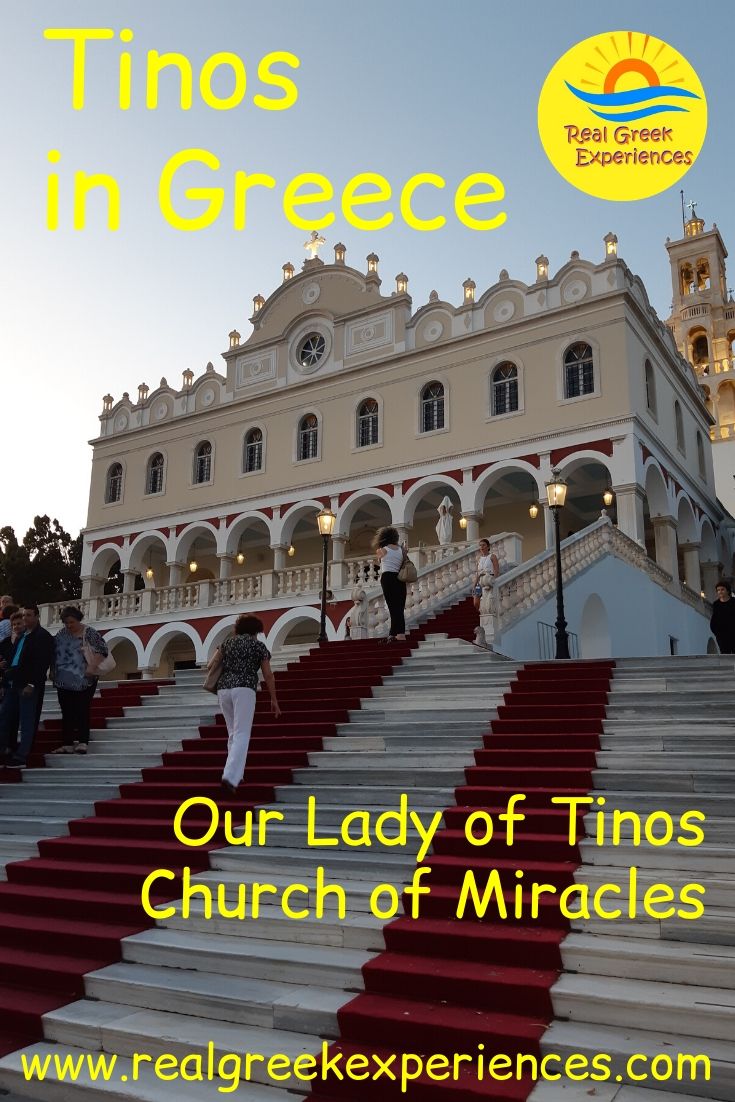