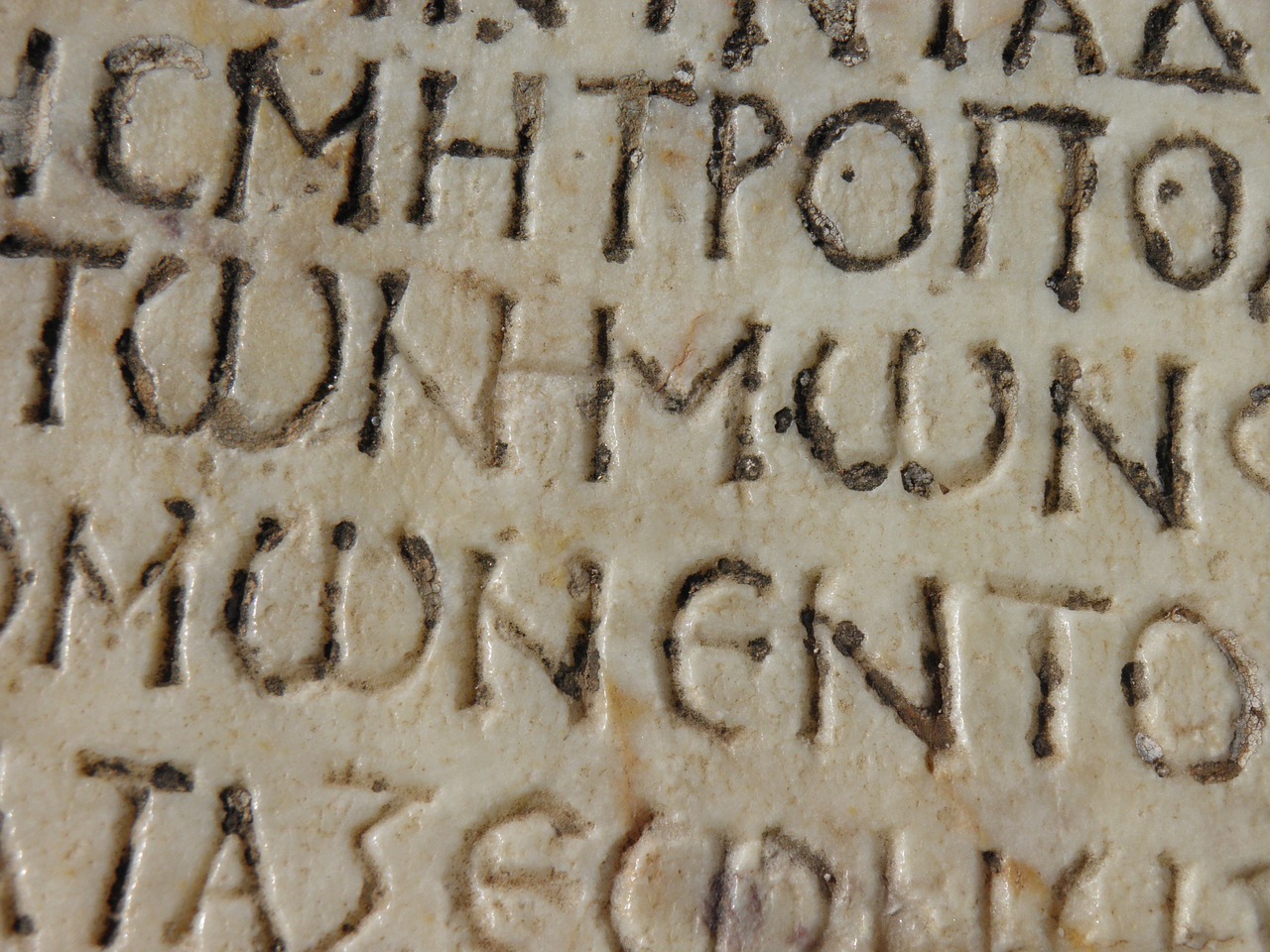 In this basic Greek for beginners article, you can find everything you need to know about the Greek alphabet. I will also show you 20 Greek words that you will find useful!

It’s all Greek to me!

This is what most people say when they try to read the Greek alphabet for the first time. But don’t panic!

Many of the letters are similar to the letters of the Latin alphabet, which you might be more familiar with. And if you remember your Mathematics and Science classes, you may recognize some other Greek symbols, like pi (π) or tau (τ).

Read on to find out more about the Greek alphabet origin, the Greek writing system, and some basic Greek phrases pronunciation!

Short history of the Greek alphabet

The Greek alphabet was originally derived at around 1,000 BC from the Phoenician alphabet, which in turn descended from the North Semitic alphabet. If you want to learn a little more about the Semitic languages, have a look here.

The alphabet that Greeks use today took its present form thousands of years ago, during the late 5th century BC, and never changed since. This means that modern-day Greeks can actually read the letters on ancient Greek inscriptions!

You might be surprised to know that all modern European alphabets are actually based on the Greek alphabet. Crazy, eh!

As for the Greek spoken language, iτ first appeared around the 14th century BCE, and it has the longest history of all Indo European languages. Ancient Greeks pronounced words very differently to modern Greeks.

The Greek alphabet has 24 letters, of which 17 are consonants and 7 are vowels (marked in red below). Here they are: 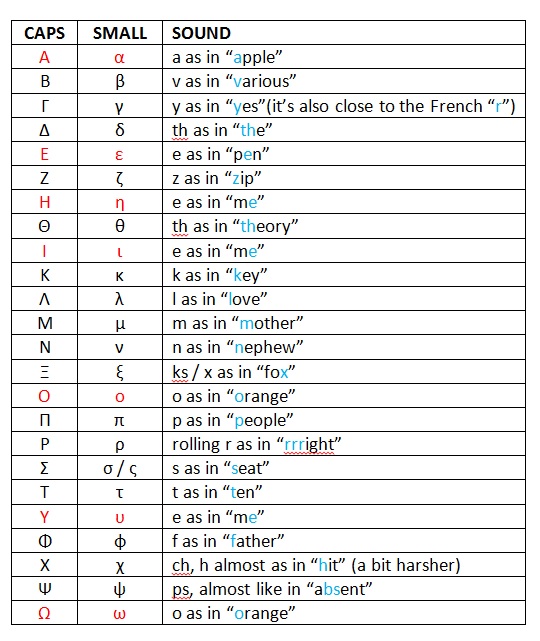 How to read Greek

Given that the Greek alphabet was an ancestor of all European alphabets, learning to read it isn’t as difficult as you might think.

As you have seen above, most of our uppercase letters also exist in the English / French alphabet. You are already familiar with the letters A, B, E, Z, H, I, K, M, N, O, P, T, Y and X.

Some Greek letters do not exist in any other language. However, you may recognize some of them from your Sciences classes. Take for example the letter sigma (Σ), pi (π), tau (τ), or delta (Δ).

This is not to say that letters that look the same in both alphabets are always pronounced the same. So, for example, the Greek character B is pronounced like the letter V in English.

This causes some confusion among visitors trying to learn a few words in modern Greek.

Memorizing the way we read out the alphabet won’t necessarily serve any purpose if all you want is to be able to read a couple of road signs when you visit. However, most people will learn parts of it sooner or later. Here it is:

Hard to read out? No worries. Here’s a short video with the Greek alphabet.

Apart from the 24 letters of the Greek alphabet, we also have a few letter combinations. 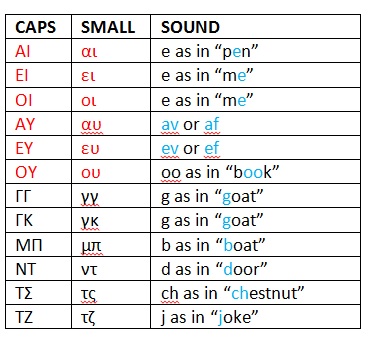 As the Greek alphabet doesn’t have letters for the sounds “b”, “d”, “g”, “j” and “ch”, we use the consonant combinations above.

This is because in terms of pronunciation, Greek is very straightforward when compared to English, French or other languages.

Here’s why: in English, the same letter can be pronounced in many different ways. Think of the letter “a” in “apple”, “ball”, “man” and “flakes” – it sounds very different!

In Greek, however Greek letters sound the same every time we read them. Exceptions are the letters Γ and Χ, and letters within a letter combination.

For example, the Greek character “α” sounds the same in all the following words – μαμά, αέρας, καλημέρα, παρακαλώ, αρχή. It always sounds like “a” in the word “apple”. Easy, eh!

While the Greek alphabet has 7 vowels, we only have five vowel sounds:

As you see, some of our vowels and vowel combinations are pronounced in exactly the same way.

If you only want to read Greek on a road sign or a taverna menu, this shouldn’t be a problem. You just need to familiarize yourself with each letter or combination, and remember its sound.

Knowing which one to use when you are writing something is another story. Many people who decide to study Greek, and even some Greeks, are often uncertain about the correct spellings of words.

Do I need to learn Greek before I visit?

Most Greeks speak at least a few words in another language. So you don’t really need to worry about learning Greek at all.

However, if you are planning a trip to Greece, why not try and learn a few Greek words before you travel. 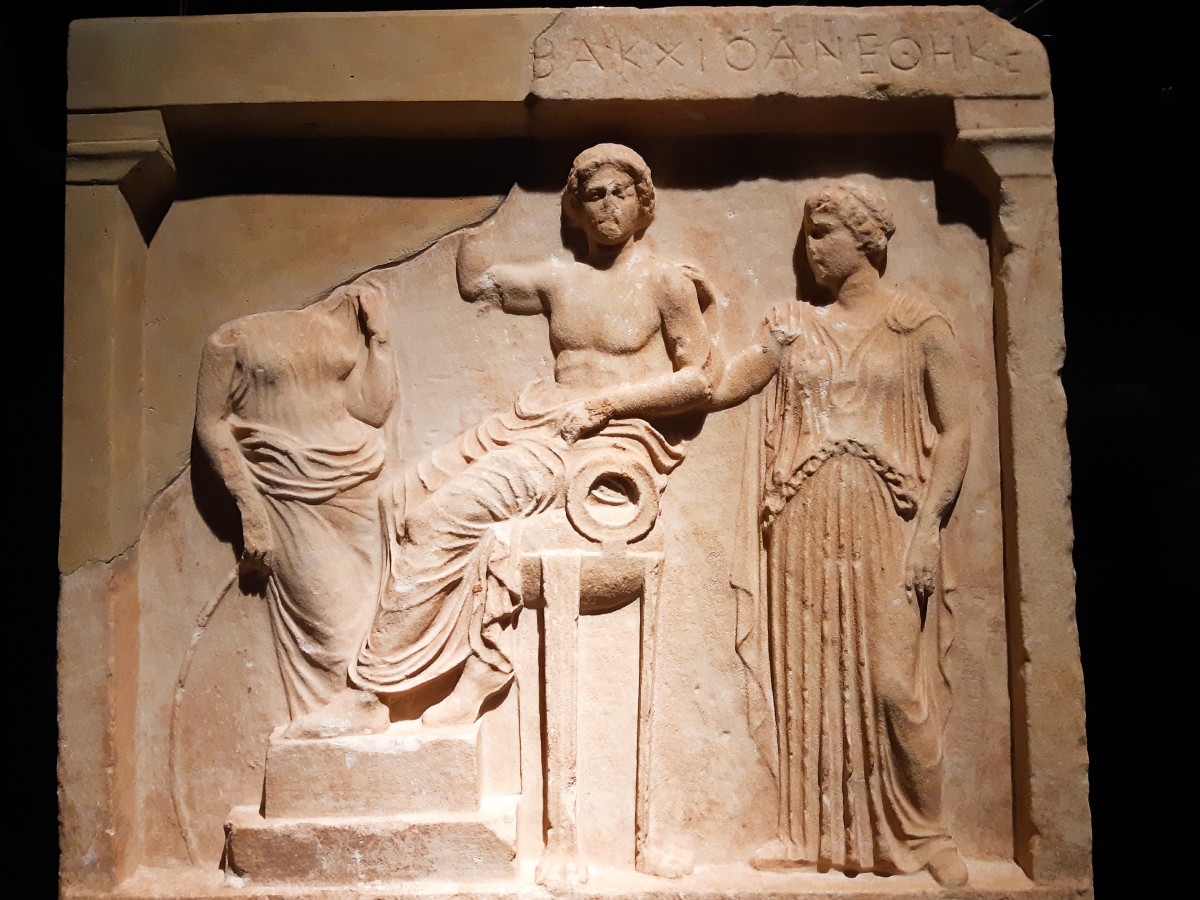 It’s always a nice gesture to try and learn a few words in the Greek language. After all, an effort to speak Greek will attract some smiles, and possibly some treats!

Here are 20 words that you are likely to find useful during your holiday in Greece.

As you can see in the second column, we use a little stress over certain vowels. This denotes the syllable that you need to stress in each word. I’ve used an underlined letter in the third column, to show where the stress goes. 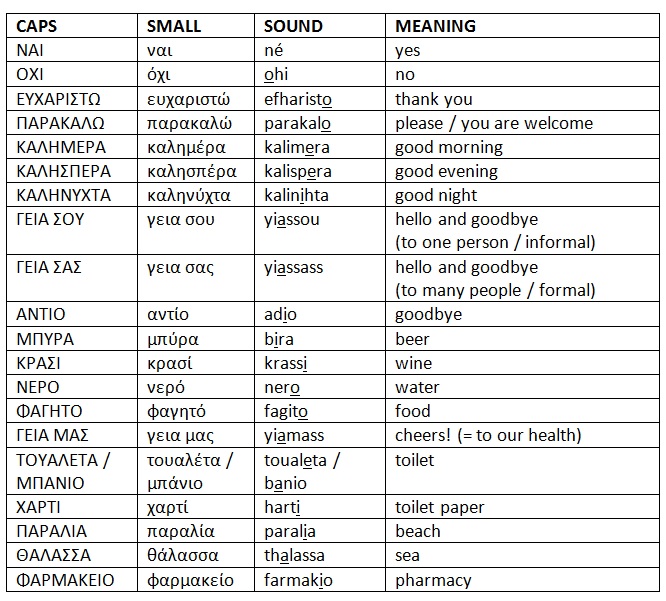 When trying to read Greek, my advice is to not worry too much about the modern Greek pronunciations. The sounds in Greek will not necessarily correspond with the sounds in your language.

Two great examples are the words OXI, meaning no, and ΕΥΧΑΡΙΣΤΩ, meaning thank you. The sound for the letter X doesn’t really exist in English – it’s something like a harsh “h”. As for the long Greek “thank you” word, it’s off-putting for most visitors!

One great little phrase to learn is yiassou / yiassass. It can mean hello, but also goodbye in Greek, so it can be very useful.

If you were disappointed not to find the word “malakas” in this table, have a look at this other article with more Greek words and useful phrases. Though I guarantee that by the end of your vacation in Greece, you will have heard it often enough to work it out 🙂 Same with “Yiamas”, which means Cheers in Greek.

And, here’s an article that a few readers asked for: Greek swear words! I took it a step further than “malaka” this time…

Is it difficult to learn to read Greek?

While learning to read Greek isn’t too hard, speaking the language properly is a whole different matter.

Here are some of the things that foreigners find difficult while learning Greek:

If your first language is French, Spanish or Italian, you will already be familiar with the concepts of gender, cases and conjugation. Native English speakers often find it hard to get their head around them, especially in the beginning.

All I can say is, don’t get discouraged – and make sure you practice and hang out with Greeks as much as possible!

Where can I learn Greek?

Getting some basic knowledge of Greek is really easy. If you have some degree of self-discipline, you can try hundreds of free YouTube videos and apps, such as Duolingo.

You will listen to real Greek pronunciation, learn how to form complete sentences, build up your vocabulary, and take simple exercises. 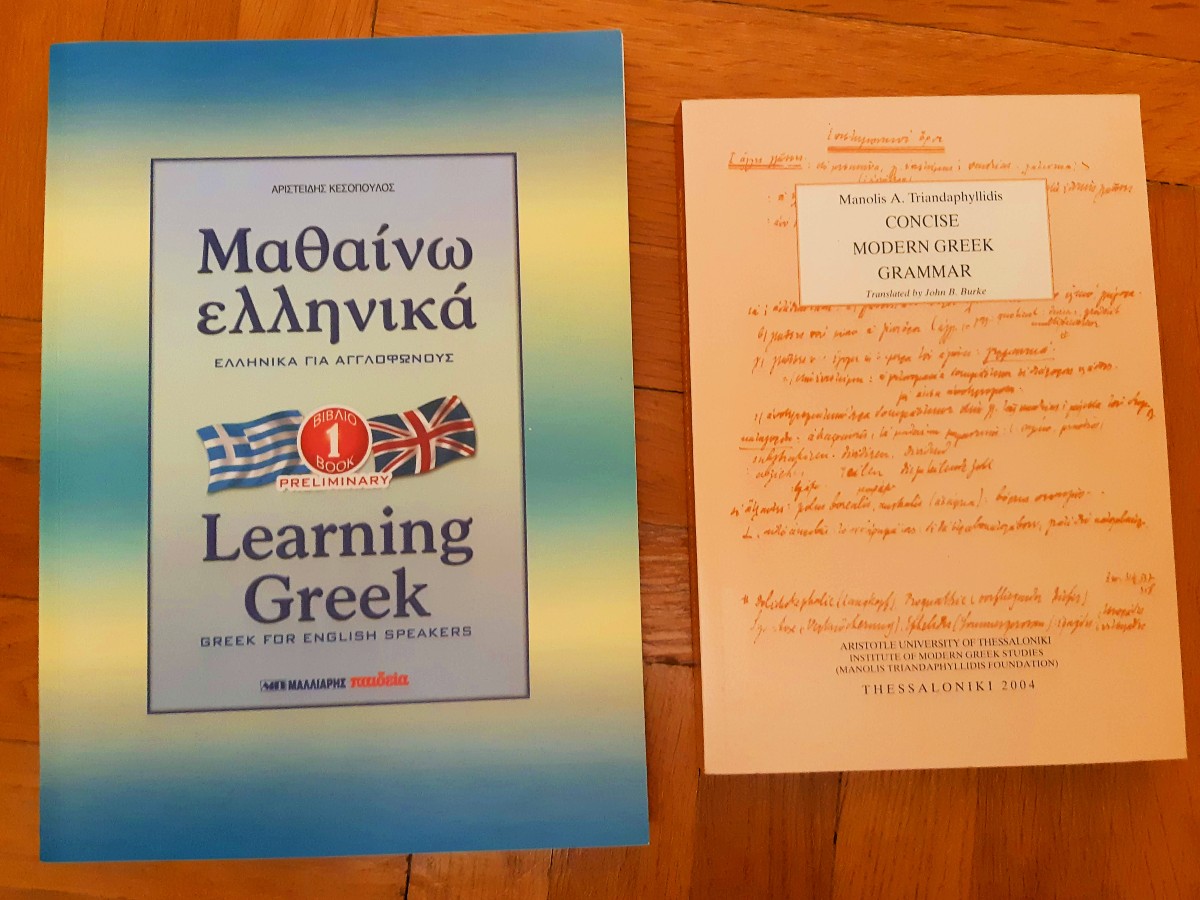 Another idea is to take live classes with an online tutor. There are dozens of platforms where you can find someone to teach you one-to-one on Skype, Zoom or a similar channel. A well-known platform is Rosetta Stone.

If you live in Greece, you can look up modern Greek courses at the University of Athens. There is also a variety of Greek classes at private institutions and with one-to-one tutors.

A fun way to learn some Greek if you are visiting for a few days, is to take a Greek cooking class. Sure, you will only learn words relevant to food… and there’s nothing wrong with that!

Whatever course you decide to take, make sure you also have access to a good grammar book, written for foreigners, and maybe a dictionary. No, Google translate isn’t perfect yet!

FAQs about the Greek alphabet:

Here are a few more answers to your questions:

What are the 24 Greek letters?

How do I write my name in Greek?

It’s all about pronunciation! Read out your name, and try to break it up in sounds. As an example, my own name, Vanessa, is written Βανέσσα in Greek – though some people will write it as Βανέσα, skipping the second sigma.

Is it easy to learn Greek?

Greek is considered a fairly difficult language to master, especially for native English speakers. The best way to learn Greek is to move to Greece and hang out with Greeks!

Is modern Greek the same with ancient Greek?

Not at all! While the alphabet is the same, the language itself is very different. However, the etymology of many modern Greek words comes from ancient Greek. Words like democracy, philosophy, theatre, have existed for thousands of years.

Do I need to learn Greek before visiting Greece?

No, you don’t. Almost everyone in Greece, especially the people working in the tourism industry, speak at least some words of English, French or another language. However, everyone will appreciate your effort to speak even a few words of Greek.

If you liked this article, you will probably enjoy these other Greece travel guides:

Hi! I am Vanessa, a blogger and travel writer from Athens in Greece. I hope you have found this introduction to Greek helpful. If there are any other Greek words you’d like to know, please leave a comment below! You can also get in touch through my Real Greek Experiences FB page and FB group. 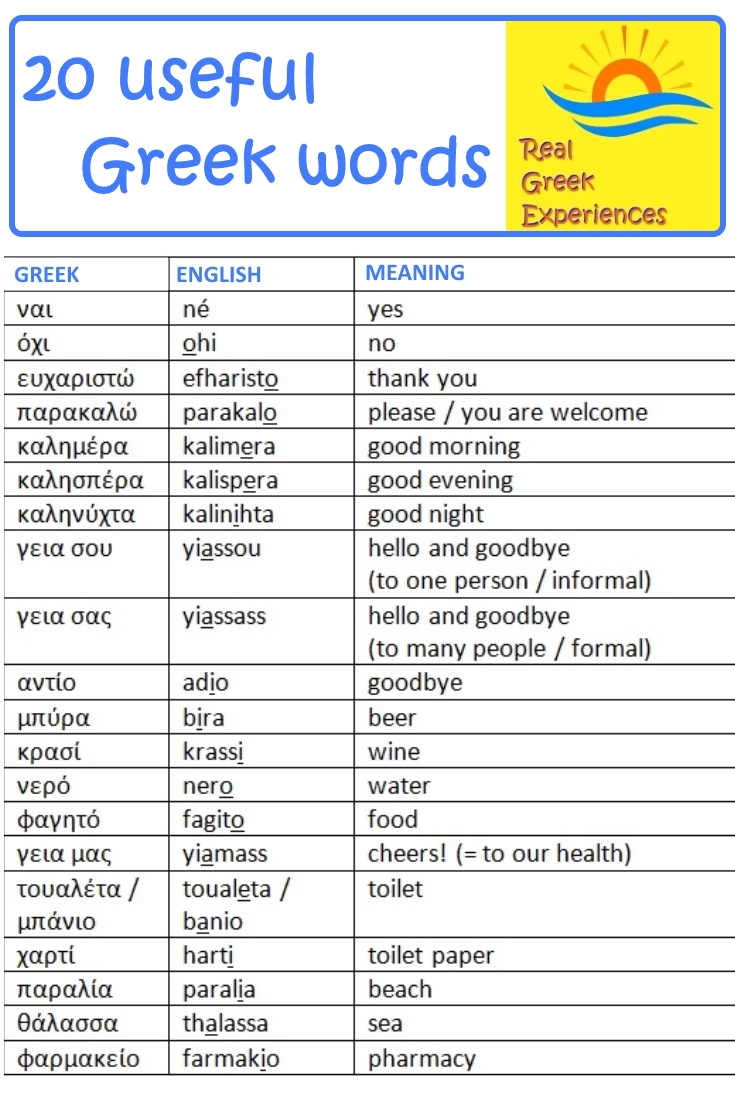