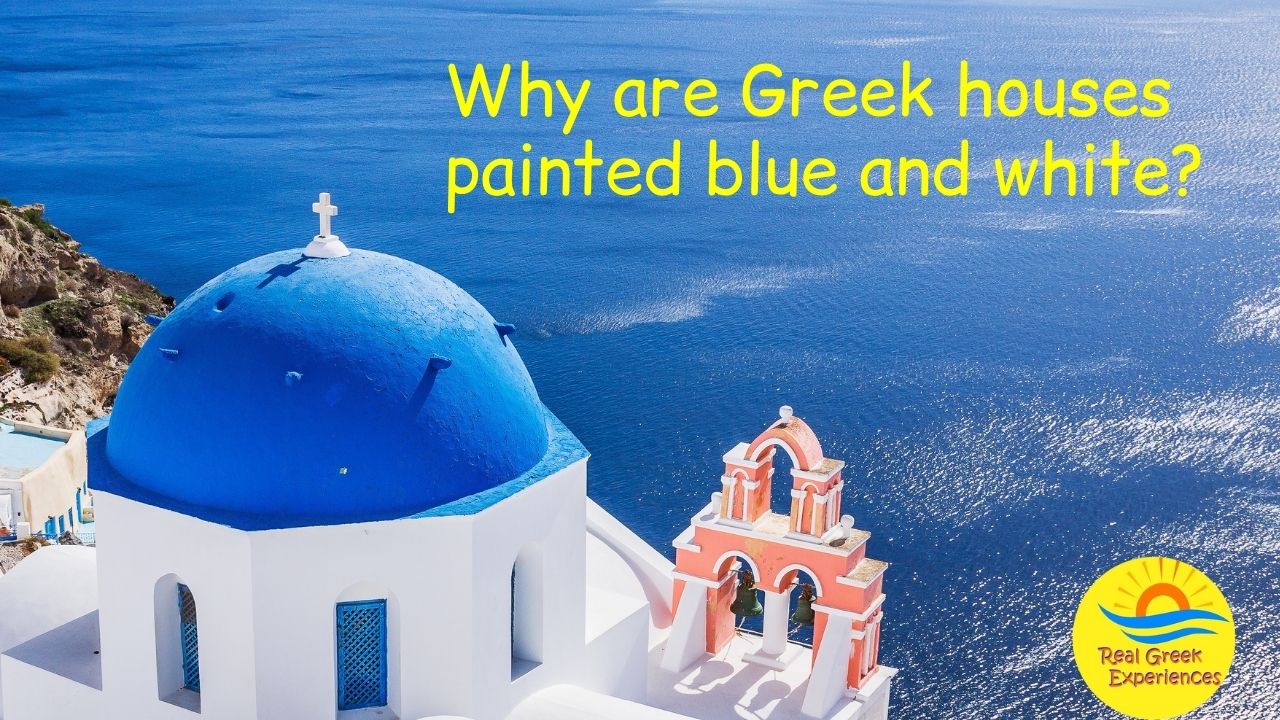 Think Greece, and pictures of whitewashed houses with blue windows will immediately come to mind. Have you ever wondered why buildings in the Cyclades are painted blue and white though? Read on to find out more!

Why are buildings in the Cyclades painted blue and white?

You might think it’s because these two colours match the Greek flag, the azure sky, the blue sea and the white waves.

However, the real reason behind Cycladic architecture color scheme wasn’t exactly a decision based on aesthetics. In fact, the reason is a lot more mundane. 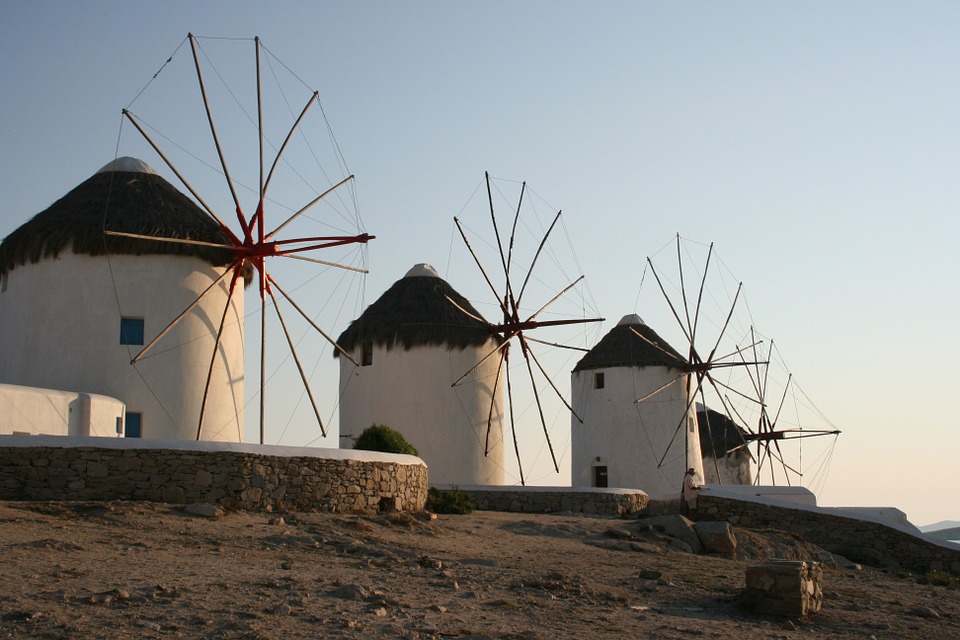 The real reason why buildings are blue and white in Greece

In 1938, there was an outbreak of cholera in Greece, including the Cycladic islands. Dictator Metaxas, the ruler of Greece at the time, passed a law for all houses in the Cyclades to be whitewashed in an effort to stop its spread.

The material used for whitewashing was limestone, which was considered a powerful disinfectant, given that the use of chlorine wasn’t common yet.

At the same time, the order to paint everything white was in accordance with the ideology of a military regime. Everything should be similar, orderly, impersonal.

This was kept for several decades, and was reinforced during the dictatorship of the late 1960s and early 1970s. 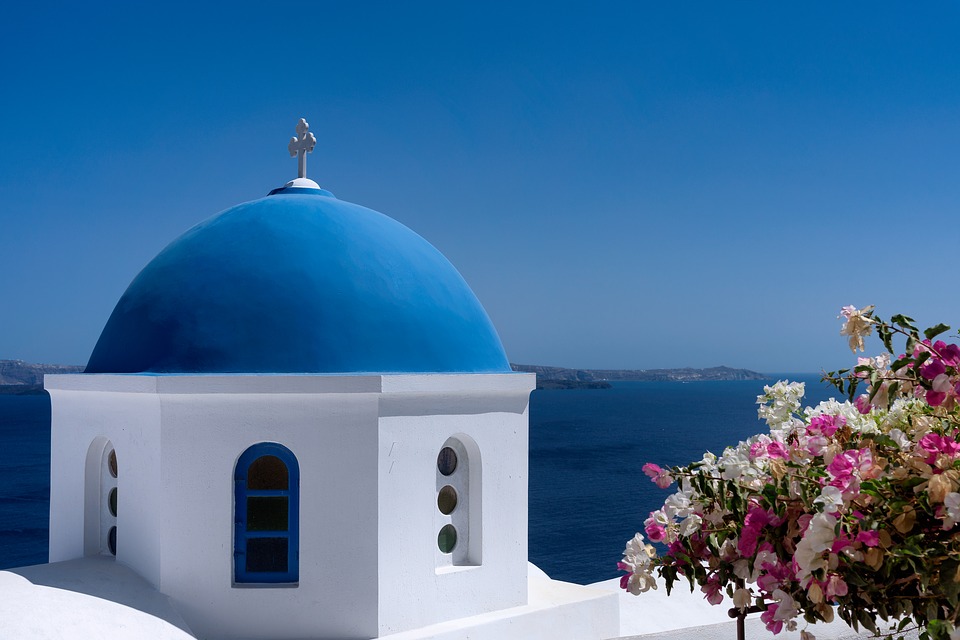 Since the white-washing was established, the islanders kept using limestone to paint their houses. The bright white colour helped reflect the sunlight and cool down the indoors temperatures.

There was also another reason though – the pure, dazzling white was an uplifting colour during the times of war and misery that Greece went through.

But where did the blue come from?

How did this blue and white become so popular?

According to a story, the blue and white became popular because of Queen Frederica of Hanover. This German Queen was the wife of King Paul the First, who ruled Greece from 1947 onwards.

She was a controversial and rather unpopular figure, who was often targeted because of her German heritage.

In 1954, Queen Frederica organized a cruise in the Aegean. The participants were members of royal families and other important people of the times, and they were awe-struck with the wild beauty of the Cycladic islands. 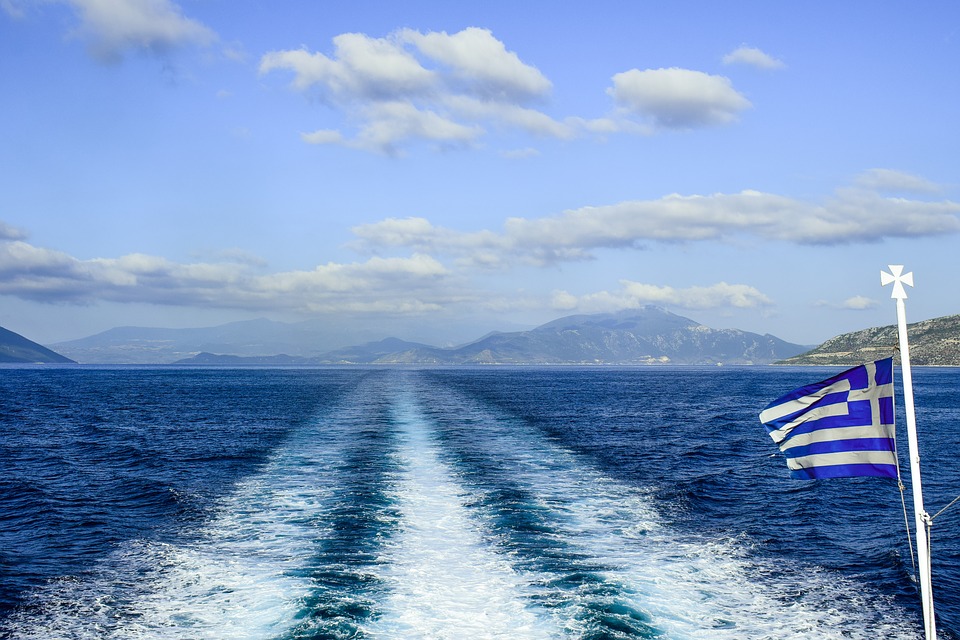 A year later, Frederica approached the newly appointed Prime Minister Konstantinos Karamanlis. She showed him photos of well-preserved, white-washed houses in Mykonos, and suggested that it would be great advertising for Greece.

She couldn’t be more right! Mykonos became one of the trendiest destinations of the 1960s and 1970s. Famous jetsetters, such as Grace Kelly and Jackie O, visited the remote island, and its popularity started soaring – and the legend lives on. 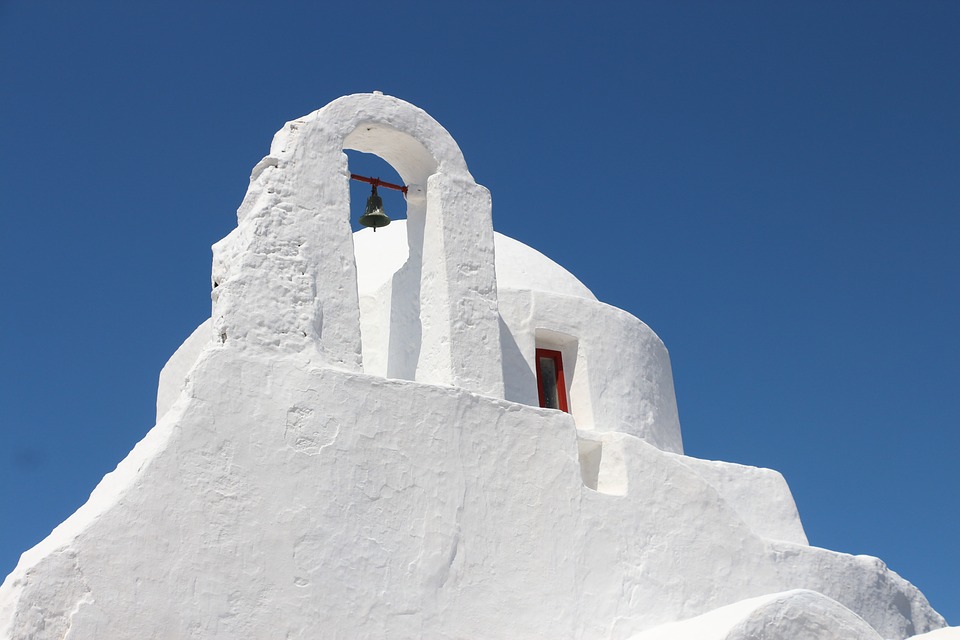 Even today, the white Cycladic houses are a trademark of Greece.

And the blue? Several accent colours are used for contrast, blue being the most common one.

And what about the windows? Why are they blue?

In fact, the Cycladic house shutters aren’t always blue, although it tends to be one of the most common colours. If you go around the Cycladic islands, you will see shutters and other wooden surfaces painted in many different colours.

Traditionally, the fishermen would paint their homes’ shutters in whatever colour was left over after they had finished repainting their boat. 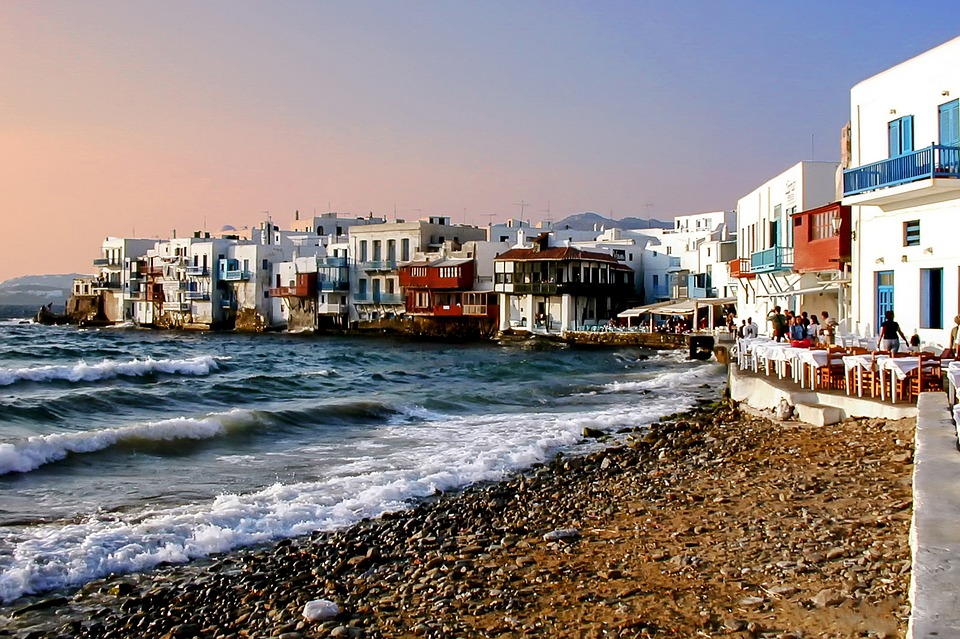 It appears that the “blue paint” idea was passed either by Metaxas in the late 1930s, or most likely by the military dictatorship of the 1960s.

The colour blue, which also appears the Greek flag, became the symbol of the nation. There were times when a radically different colour, like red, indicated a communist ideology.

Were the Cycladic houses always white?

Not at all! The Cycladic houses were traditionally made of stone, which was the material most readily available all over Greece.

During the centuries when pirates roamed the Aegean Sea, the houses were largely left unpainted, thus blending into the landscape. 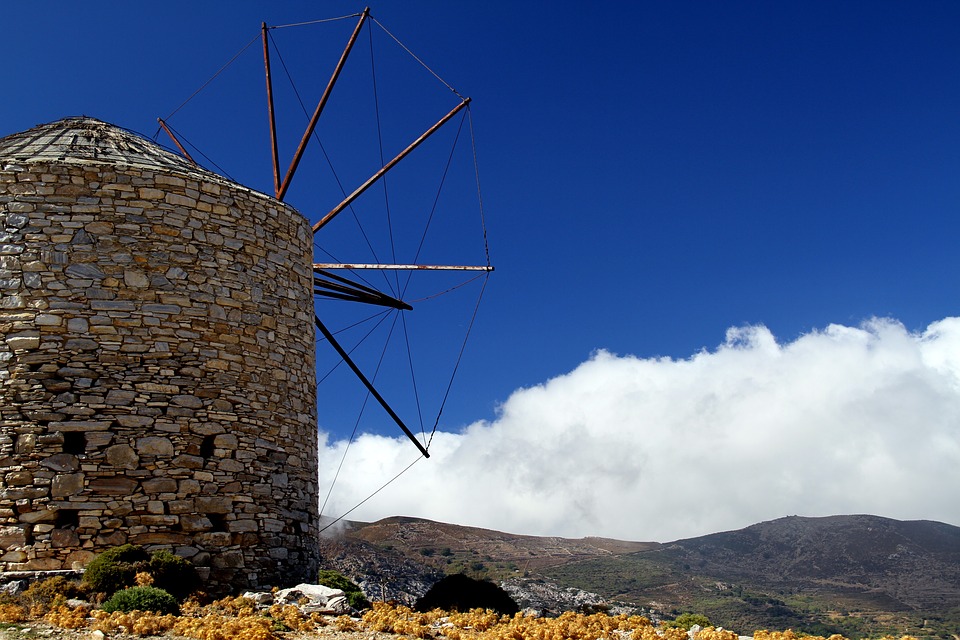 Later on, and until the late 1930s, many houses were painted in different colours. Yellow ochre, earth red, Egyptian blue and black were widely used, much like in other areas of the country.

The materials used were all made from natural sources, and the textures were very different to those of contemporary paints. A great example of the use of these colours is in the Ancient Palace of Knossos in Crete. 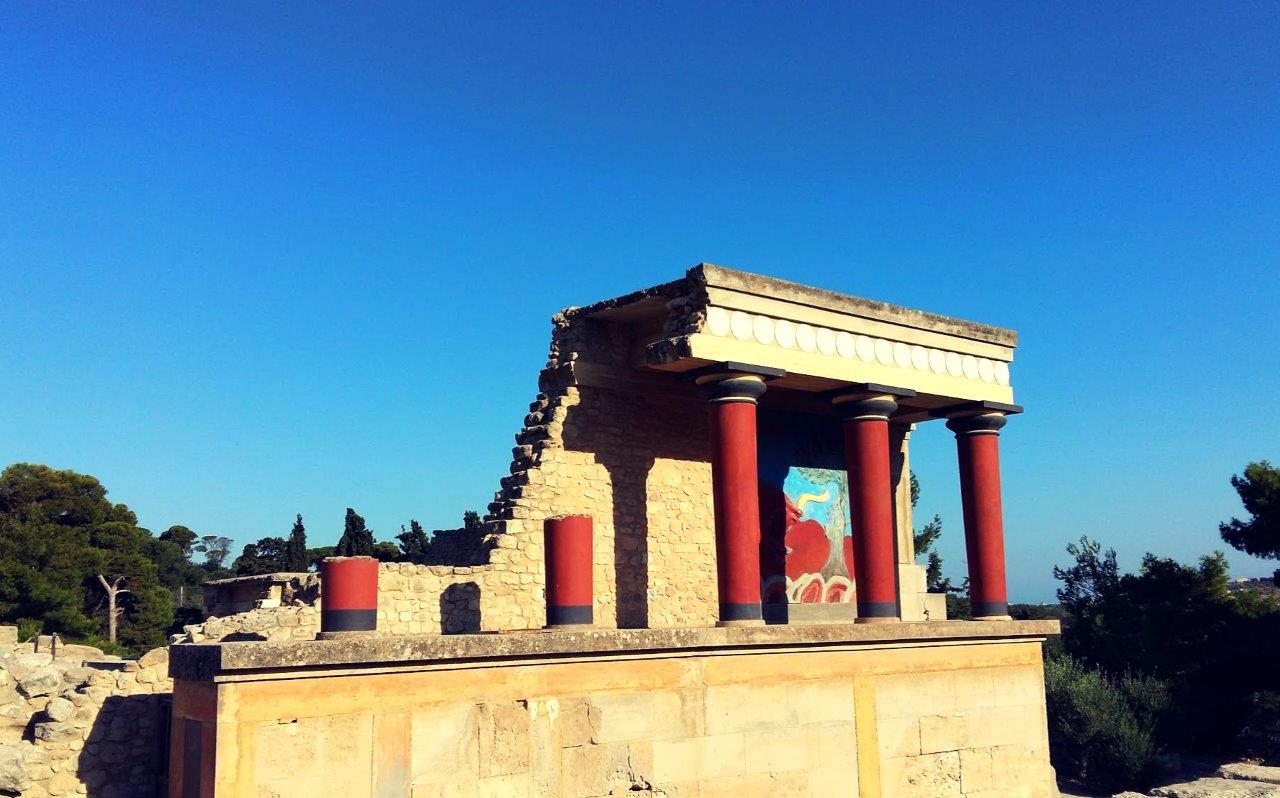 These days, the natural grey-beige colour of stone is still a very common architectural feature in several parts of Greece, especially up on the mountains. 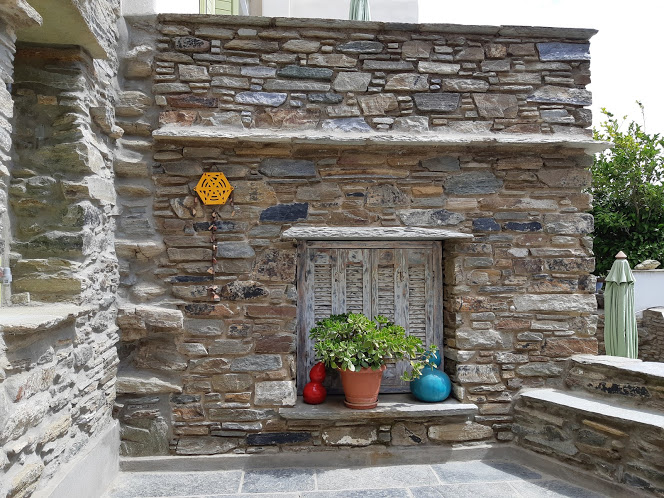 As for the Cyclades, it has actually been suggested that the blue-and-white architecture should be abandoned.

Experts in the field of architecture and heritage preservation are keen on the revival of the original multi-coloured style, or the more original natural stone colour. The white-washing is no longer being reinforced by law. 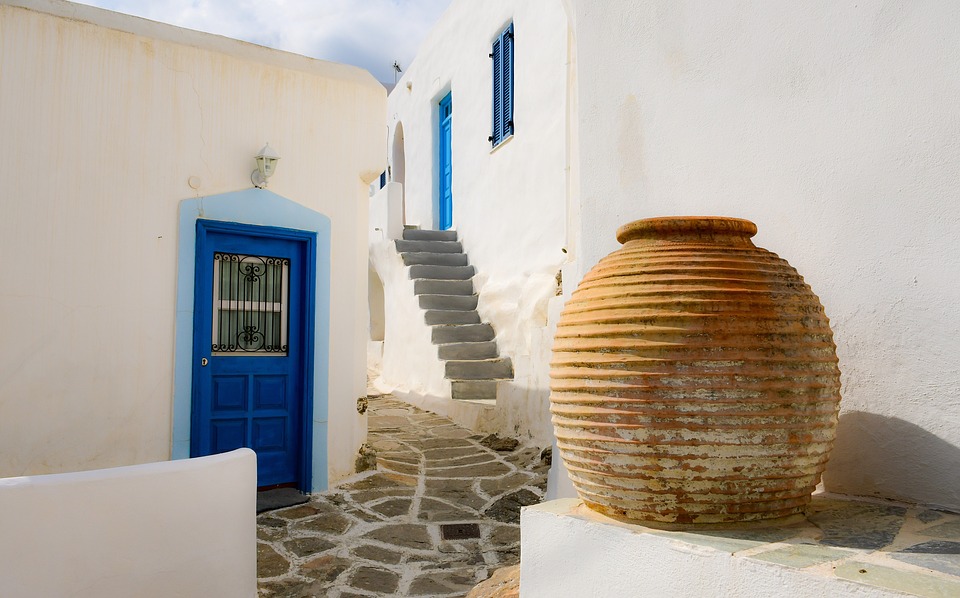 But could you imagine the famous Santorini church with the blue dome being anything apart from white and blue? I definitely can’t!

Confusingly, the Greek word for limestone is “asvestis”, that can easily be confused with the poisonous material known as asbestos.

Don’t worry though. They may sound similar, but if you hear a Greek calling the white material asbestos, you will know that they are in fact referring to limestone.

So there you have it, the reasons why white and blue buildings are common in Santorini and the Cycladic islands!

Some of the Cyclades islands, like Mykonos and Santorini, have international airports. In summer, you can fly there directly from many European airports. Other islands have domestic airports, where you can fly to from Athens.

However, most of the Cycladic islands are only accessible by ferry. Many visitors fly into Athens, and then take an onward ferry from Piraeus port, which is only a half hour out of central Athens.

You can check ferry routes to all the Greek islands and book your ferry tickets on Ferryscanner, a convenient search engine.

FAQ about the Greek island houses

Why are Greek houses painted blue and white?

The houses on some Greek islands were originally painted white with limestone. Apart from having antibacterial properties, this was the cheapest paint color available at the time! Windows and doors are painted in bright blue shades, but also other colors, for contrast.

Which Greek island has blue and white buildings?

The blue and white colors are typical of the Cyclades islands, like Santorini, Mykonos, Paros, Milos and Naxos. Almost all the buildings on these islands have white walls. Blue color is used for doors and windows, though you can often see other bright colors like red or green.

Where in Greece can I see the famous white churches with blue domes?

You will see many white churches with blue domes, as well as plenty of white houses, on most of the Cyclades islands, in the Aegean Sea. It’s not only Santorini island!

Which Greek island is the prettiest?

Every Greek island offers beautiful scenery! Santorini, Milos, Rhodes, Crete and Corfu are among the prettiest islands in Greece.

Which island in Greece has the most beautiful beaches?

Some of the Greek islands with the best beaches are Crete, Rhodes, Kos, Ios, Mykonos, Naxos, Lefkada, Kefalonia, Skiathos… and the list goes on and on!

Looking for more insightful guides to Greek culture and life? Check out these Greek blog posts:

Hi! I am Vanessa from Athens. I hope you have enjoyed this article on Cycladic architecture! Join my FB page and FB group for more tips about Greece. 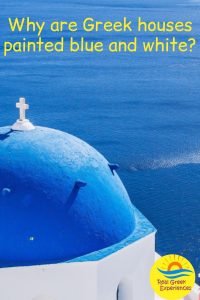 5 thoughts on “Why Are Buildings In The Cyclades Painted Blue And White?”