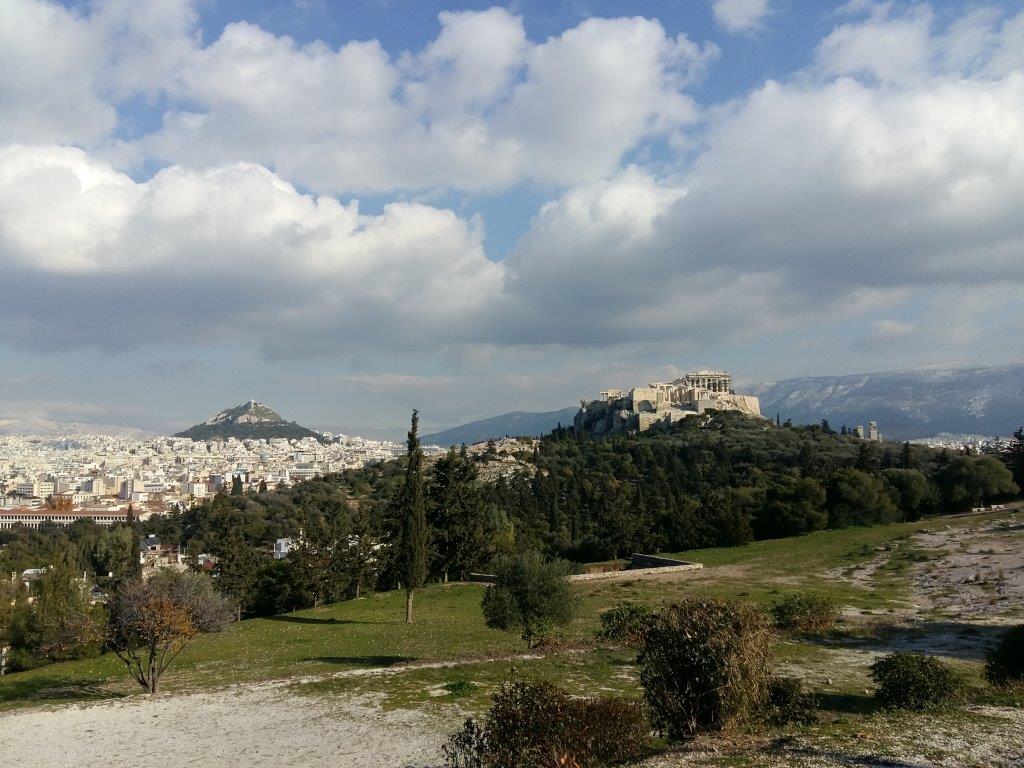 Athens doesn’t need to be expensive if you are on a budget. Here are a few tips on how to see Ancient Athens for free!

How to see Athens on a budget

Although the monuments of Ancient Athens are definitely worth the 30 euro entrance fee for the combined ticket, some people may not want to spend that money.

Fortunately, there are ways to see Ancient Athens for free. Although there is an entrance fee for many of the main attractions, the majority of landmarks such as the Acropolis or the Panathenaic Stadium can be appreciated from the outside. 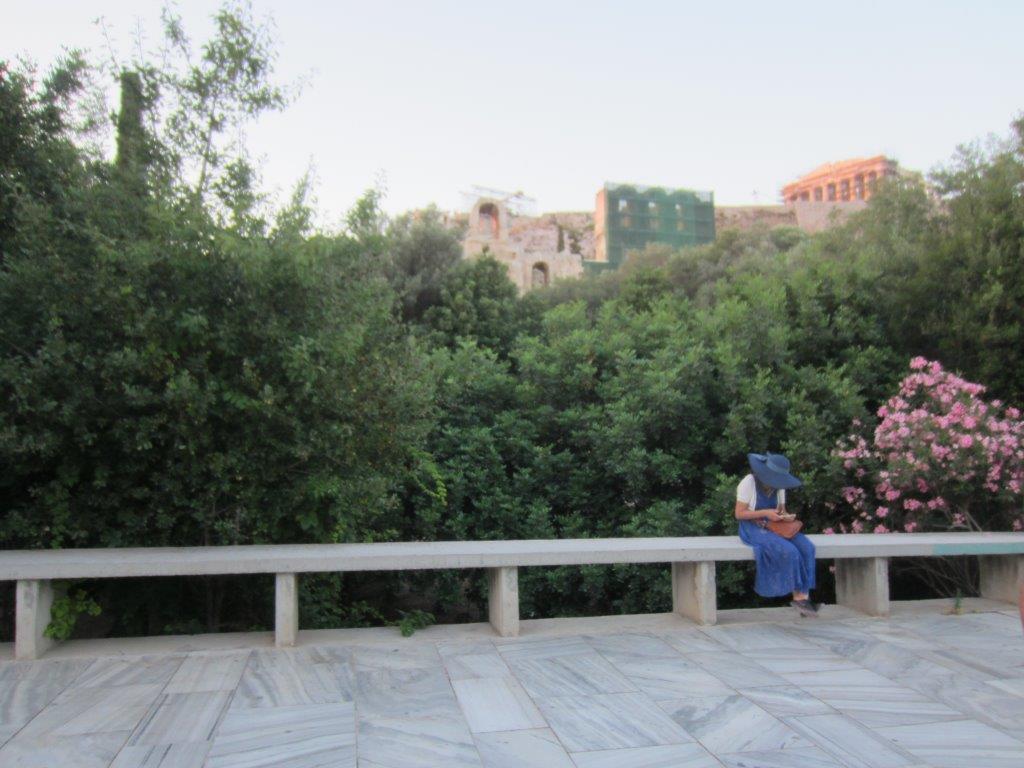 Note:  There are some free admission days each year to the monuments and museums in Athens. I have included these towards the end of the article.

So, if you are prepared to walk a lot and see things from a distance, it is possible to enjoy the ancient monuments for free. Here’s how.

A walking route to see Ancient Athens for free

In my opinion, the best way to explore a city is on foot. And there is no pedestrian street in Athens as magnificent as the street stretching between Acropolis metro and Thisseio metro.

This street was pedestrianized in 2004, a while before the Olympic Games. A welcome infrastructure development in Athens!

There are very few places in the world when you can walk in the centre of a city and be surrounded by ancient monuments, trees, locals, visitors, street artists and street vendors. 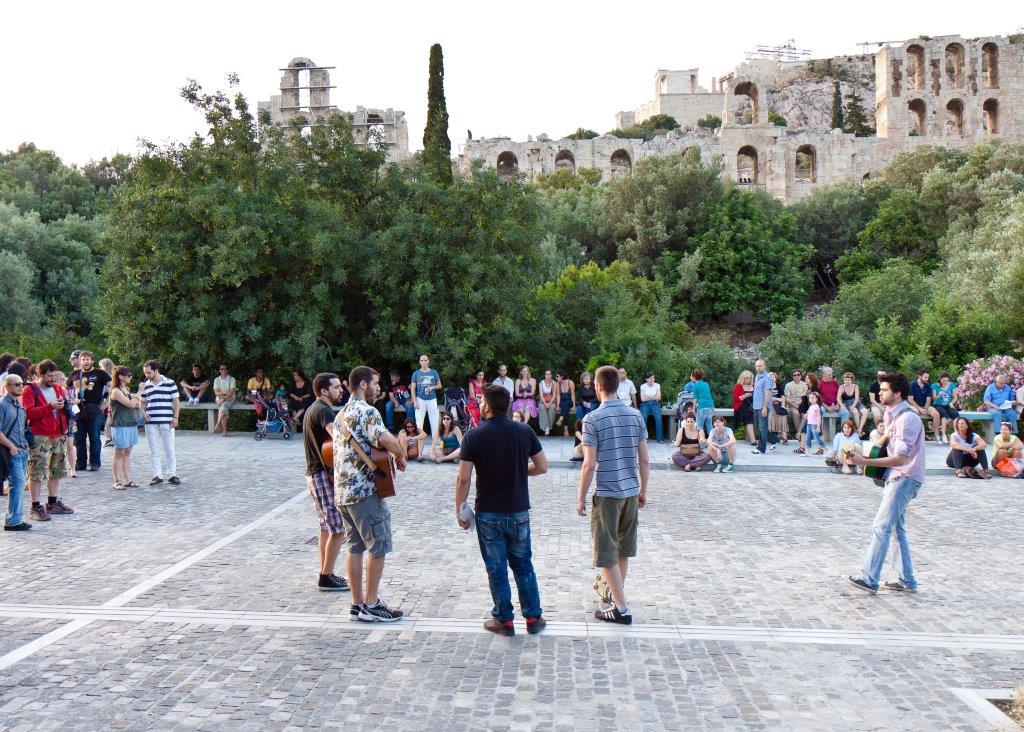 This is what you can expect to see along the way, starting from Acropolis metro station and finishing at Kerameikos metro.

Points highlighted in purple are free, and those marked in red require a ticket. I have also marked in blue other points of interest that are free of charge.

Ancient Athens for free – A walking map of Athens 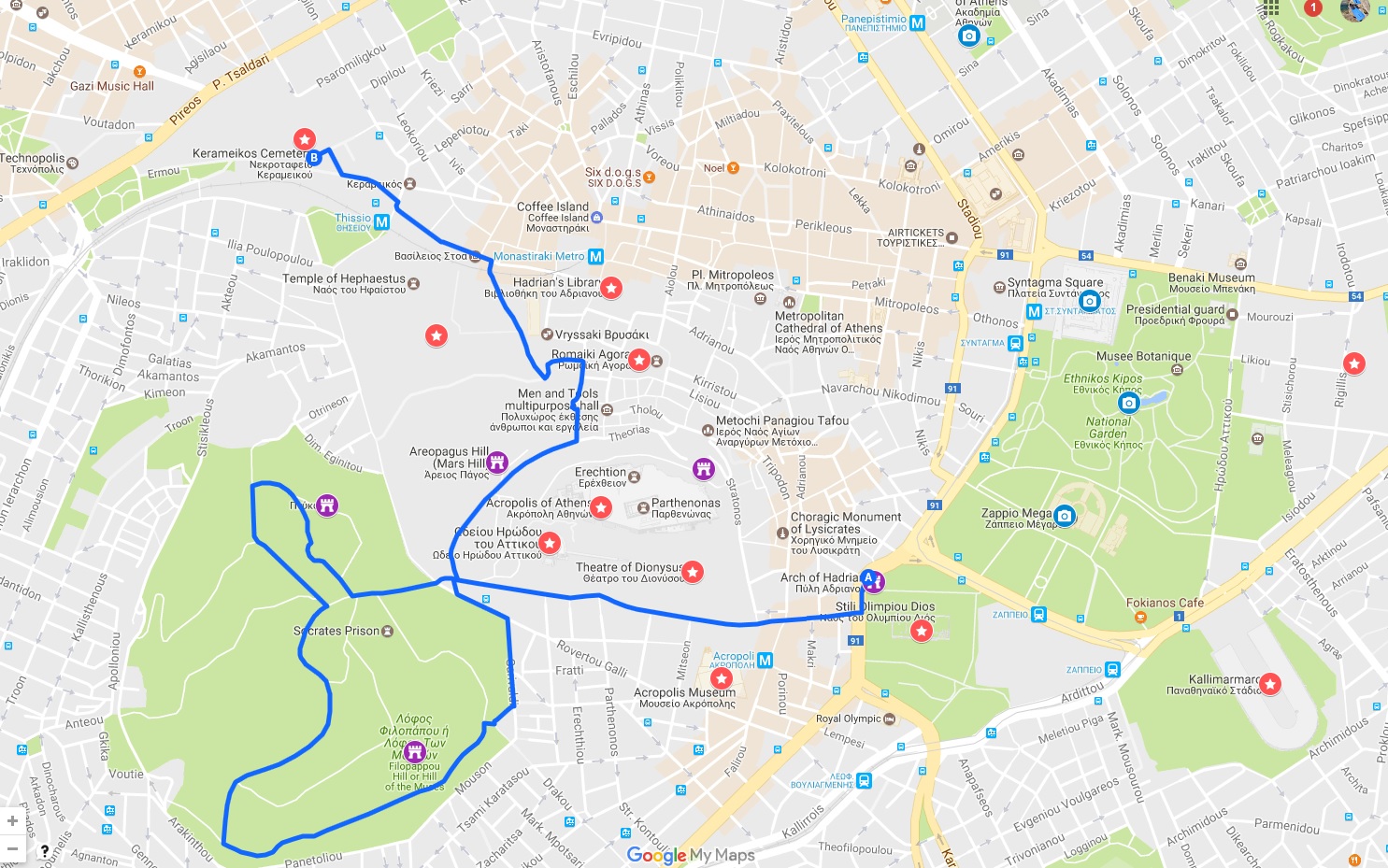 Ancient Athens – Open-air sites you can visit for free

Here’s a description of some of the sites you can visit for free when following the walking map of Athens. These sites are open 24/7 and you don’t need a ticket.

This huge gateway is located alongside a modern avenue. It was built in honour of the Roman emperor Hadrian, in 131 AD. It is entirely made of pentelic marble, and is very well preserved. 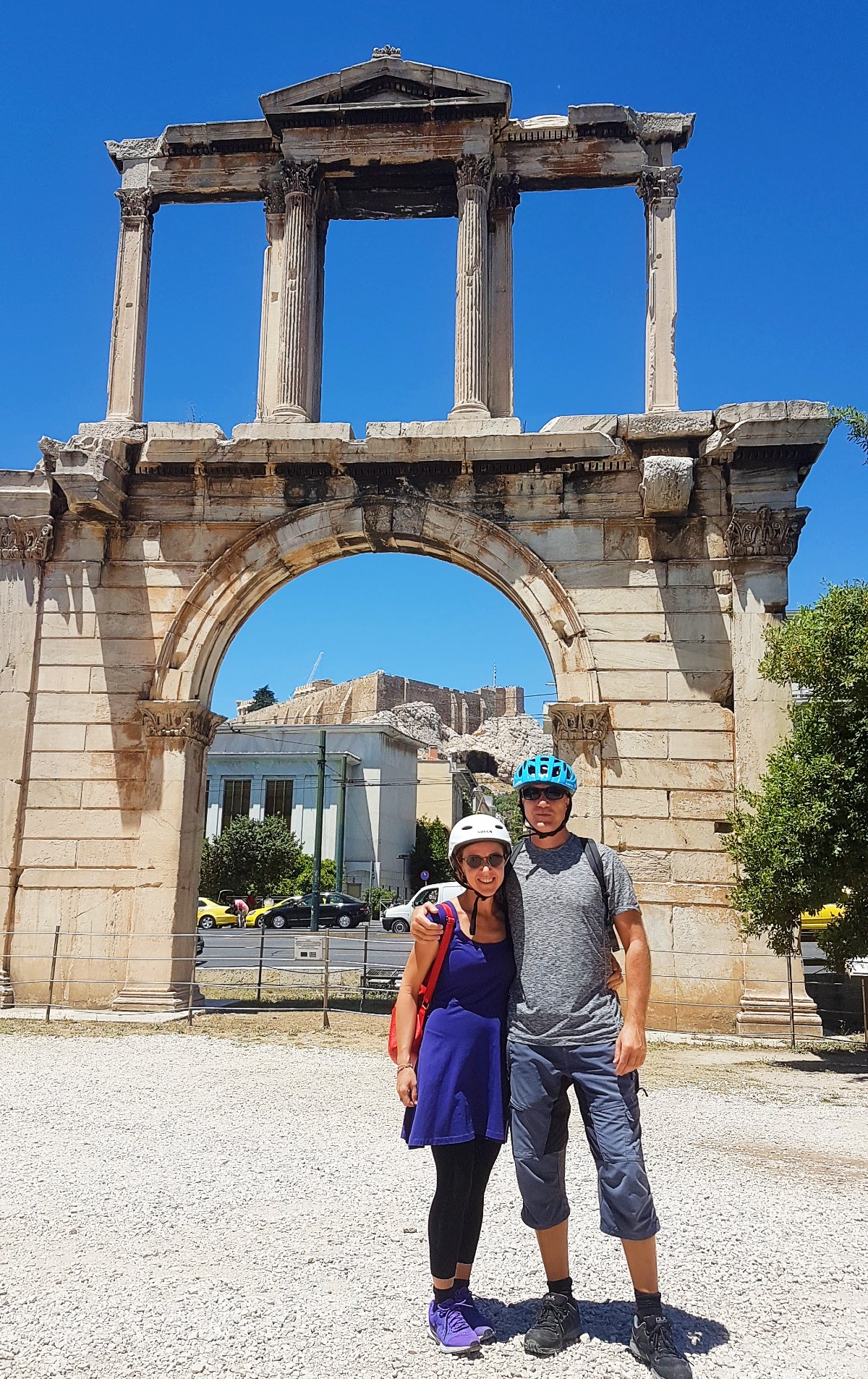 Tip: If you stand near the arch of Hadrian, you can’t miss the massive Temple of Zeus nearby.

This amazing green area right in the centre of Athens, is very popular with locals and visitors alike. You will see locals walking their dogs and strolling up to the top, and visitors taking pictures of the Acropolis.

The Hill is best known as Philopappou Hill, named after the prince Philopappos, who was of Syrian descent and died in Athens in 116 AD.

To honour his memory, the citizens of Athens built a grand marble tomb monument on the top of the Hill, which still stands in great condition.

The famous Greek philosopher Socrate’s prison is said to have been somewhere on Philopappou Hill. The exact location is probably not certain.

If you are visiting in summer, you can consider checking out a performance in Dora Stratou Theatre.

Tip: Do not forget your camera, as Philopappou Hill offers some of the best views of the Acropolis!

3. Pnyx or Hill of the Nymphs

Right next to Philopappou Hill, you can find another hill with the rather unusual name “Pnyx”. This is one of the most important places in ancient Greece. 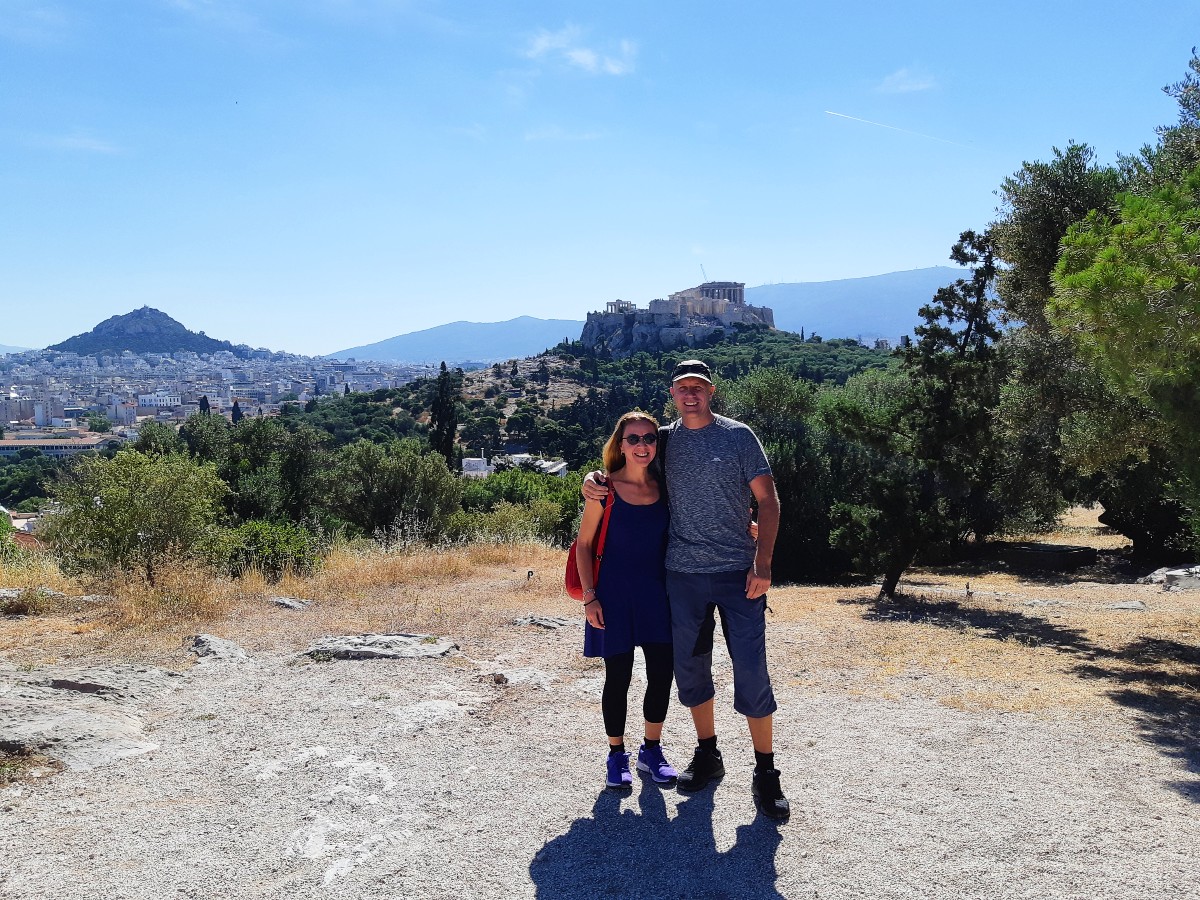 Pnyx is the place where the Athenians gathered to host their popular assemblies (ekklesia), after political power was transferred to the citizens, towards the end of the 6th century BC. At that time, the Pnyx was right outside the city borders.

All the important Greek politicians, statesmen and speakers that you may have heard of, such as Pericles, Aristides and Demosthenes, once delivered a speech on the Pnyx.

This is where all important political decisions were taken. Any Athenian citizen had the right to speak during an assembly – at least in theory. 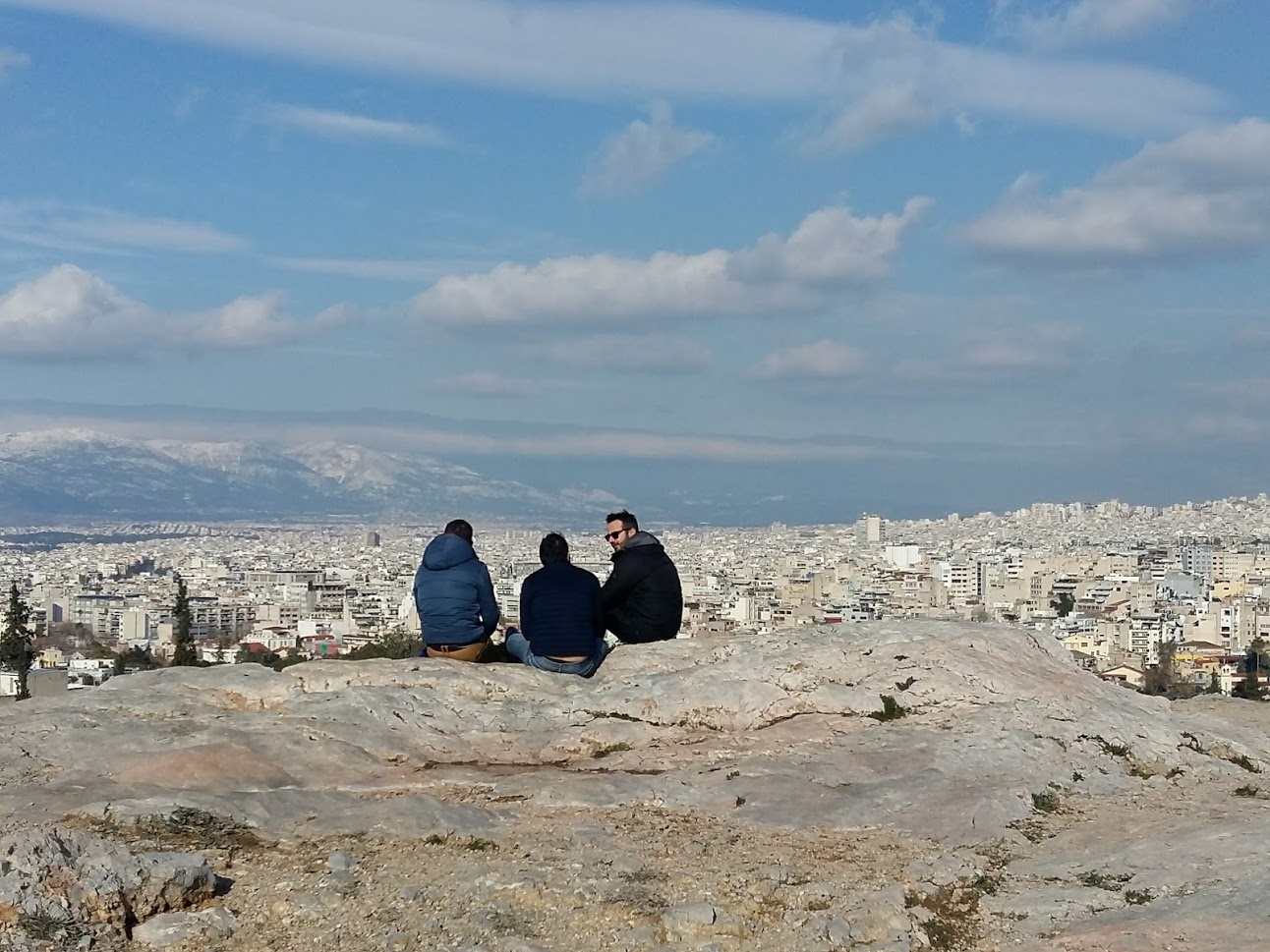 If you are visiting Pnyx Hill on your walking route to see Ancient Athens for free, you can also visit the National Observatory of Athens.

Tip: While on the Pnyx, you can pack a picnic and enjoy the amazing views!

Areopagus Hill, also known as “the Rock”, is a large rock very close to the Acropolis.

In the ancient times, it served as a court, where homicide trials took place. According to some historians, trials only took place after dark, and never on full moon nights, because murderers were considered to be unholy, and the judges and audience should not be polluted by their sight.

In 51 AD, Apostle Paul delivered his famous speech on the Areopagus.

The Rock offers an excellent view of the Acropolis and the surrounding area, and is lovely at absolutely any time of the day.

My favourite time to be there is probably around sunset, when Acropolis is being lit up, or even at night. Then again, the view is amazing first thing in the morning! 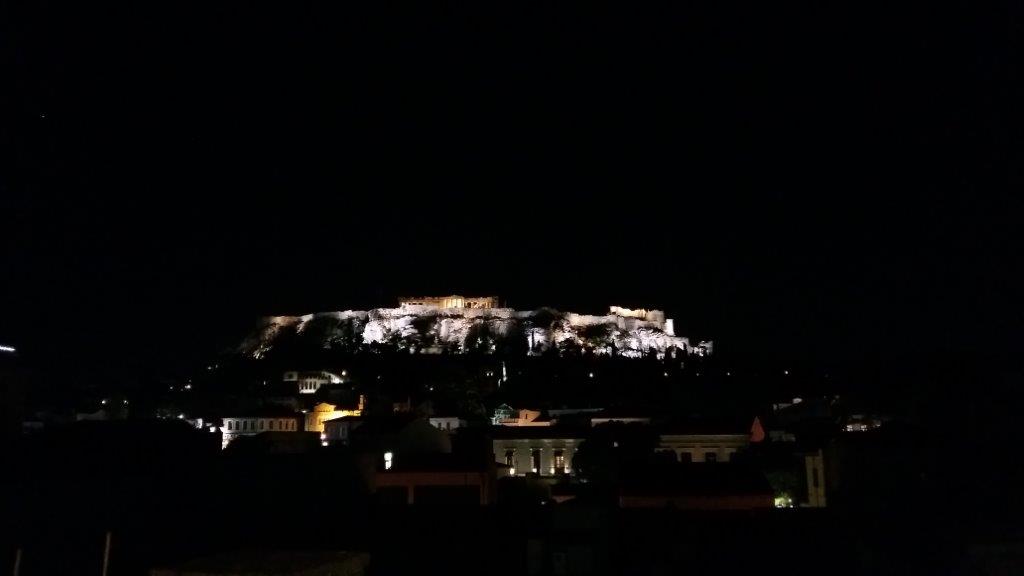 Tip: You can climb up the hill on either the ancient rocks, or the modern metal stairs. I suggest wearing comfortable shoes, as the rocks on the hill are very slippery.

Finally, if you happen to be in Greece on certain days of the year, you may visit the ancient sites in Athens for free. Be prepared, however, to meet plenty of other people who had the same idea!

You can visit the sites of Ancient Athens for free on the following dates:

In addition, entrance is free on all days for EU students, or children under 18. You will be asked for proof, so make sure you have your student ID or other ID. 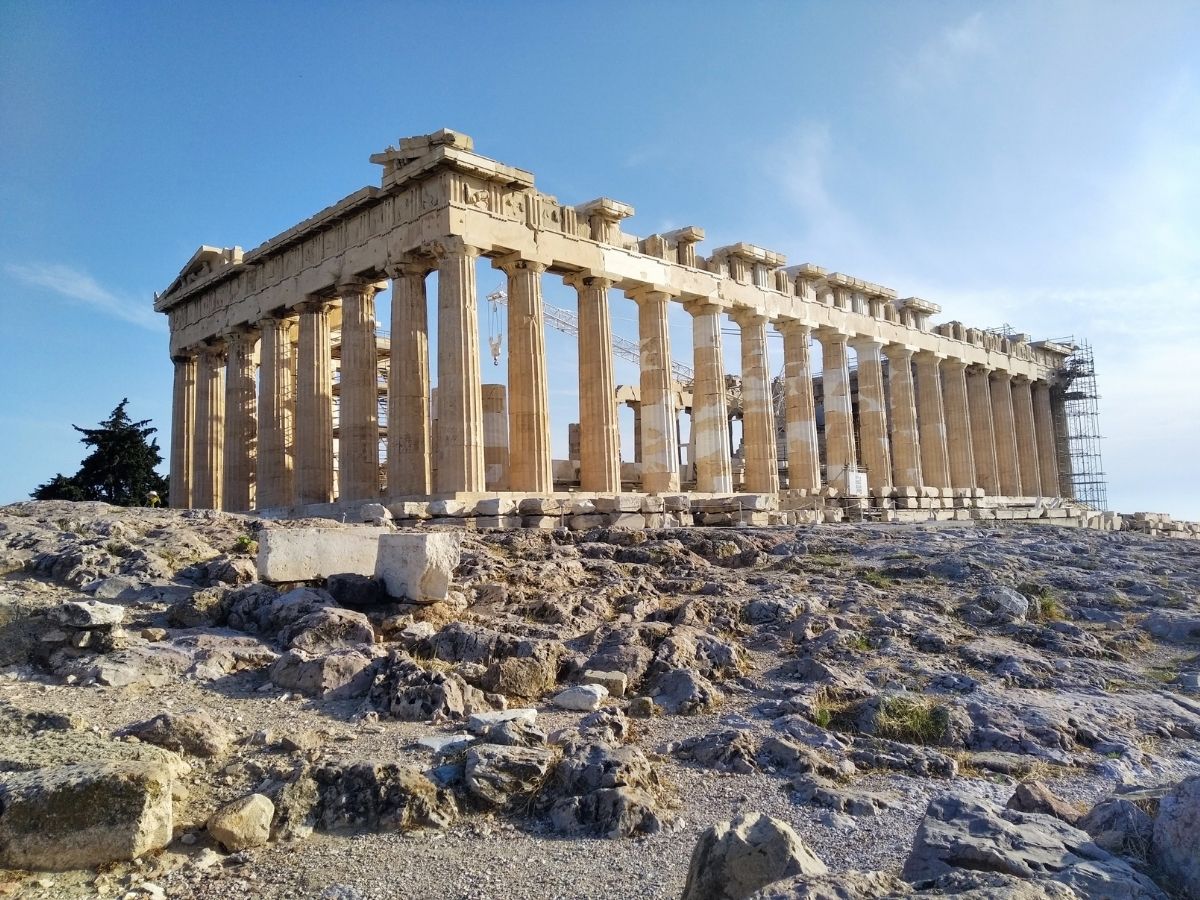 Here are some questions that people visiting Athens often ask:

Is Athens cheap or expensive?

Overall, Athens isn’t as expensive as other European capitals. As an indication, a couple can find accommodation for 40 euro per night, and have a great meal for 30-40 euro. Budget-minded travellers could easily share a meal for two with 15-20 euro.

What should I not miss in Athens?

Two of the things that you should not miss in Athens include the Acropolis and a long walk on Areopagitou street and the surroundings. I also suggest visiting the Ancient Agora, the vibrant Varvakios food market, and the cool areas of Plaka, Monastiraki and Psiri.

Is the Acropolis worth it?

Yes, the Acropolis is worth visiting once in your life. However, if you want to truly appreciate the ancient citadel, it’s best to go on a guided tour, where you will learn more about Ancient Greece. If this is out of your budget, I suggest trying to learn as much as you can before visiting.

Is Athens a dirty city?

I hate to say it, but Athens is not the cleanest city in Europe. There is also a lot of graffiti, which makes some areas look shabby. Some people would argue that it’s part of its charm!

Is Athens worth visiting?

As an Athenian, I’m biased. I think that Athens is worth visiting at least once in your life. It offers a mix of ancient sites, byzantine churches, modern buildings and vibrant markets, along with hundreds of cafes, tavernas and bars. Like every city on the planet, it’s quite unique!

And finally, check out my article on the best Greek mythology movies!

Hello! I am Vanessa, a travel writer from Athens. Travelling is my passion, and am always excited to discover the archaeological sites in Greece. I hope you found this itinerary around the ancient sites in Athens helpful! For any questions, please comment below. Or you can get in touch on the Real Greek Experiences FB page and FB group. 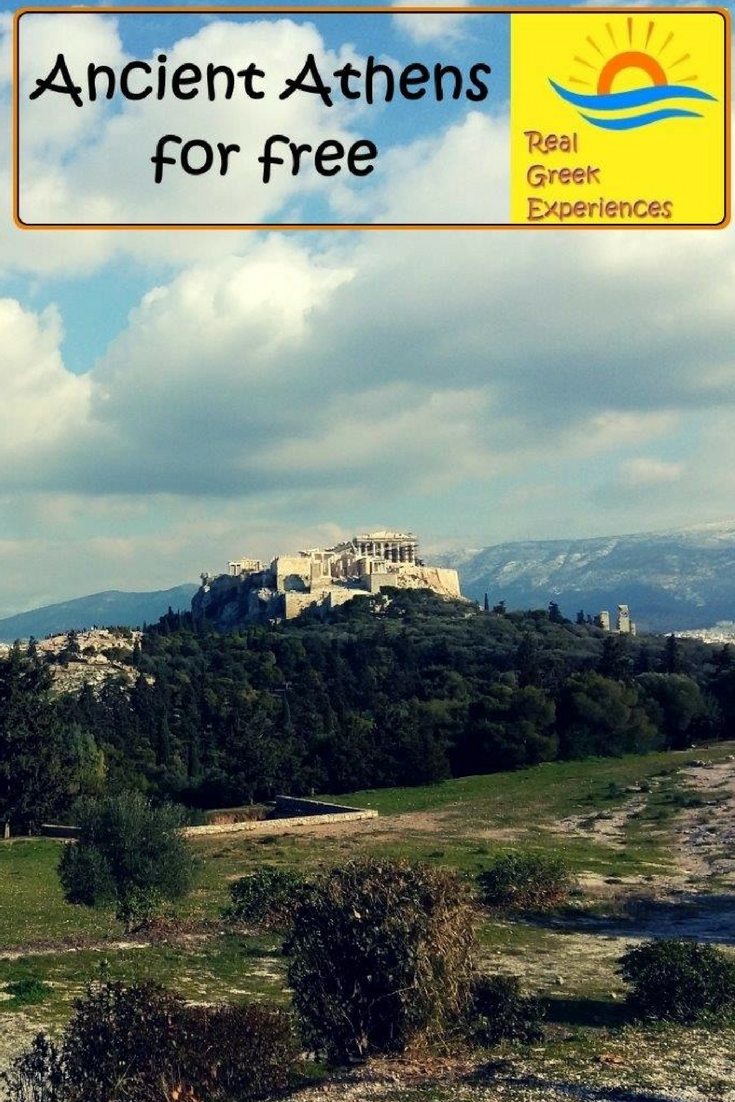