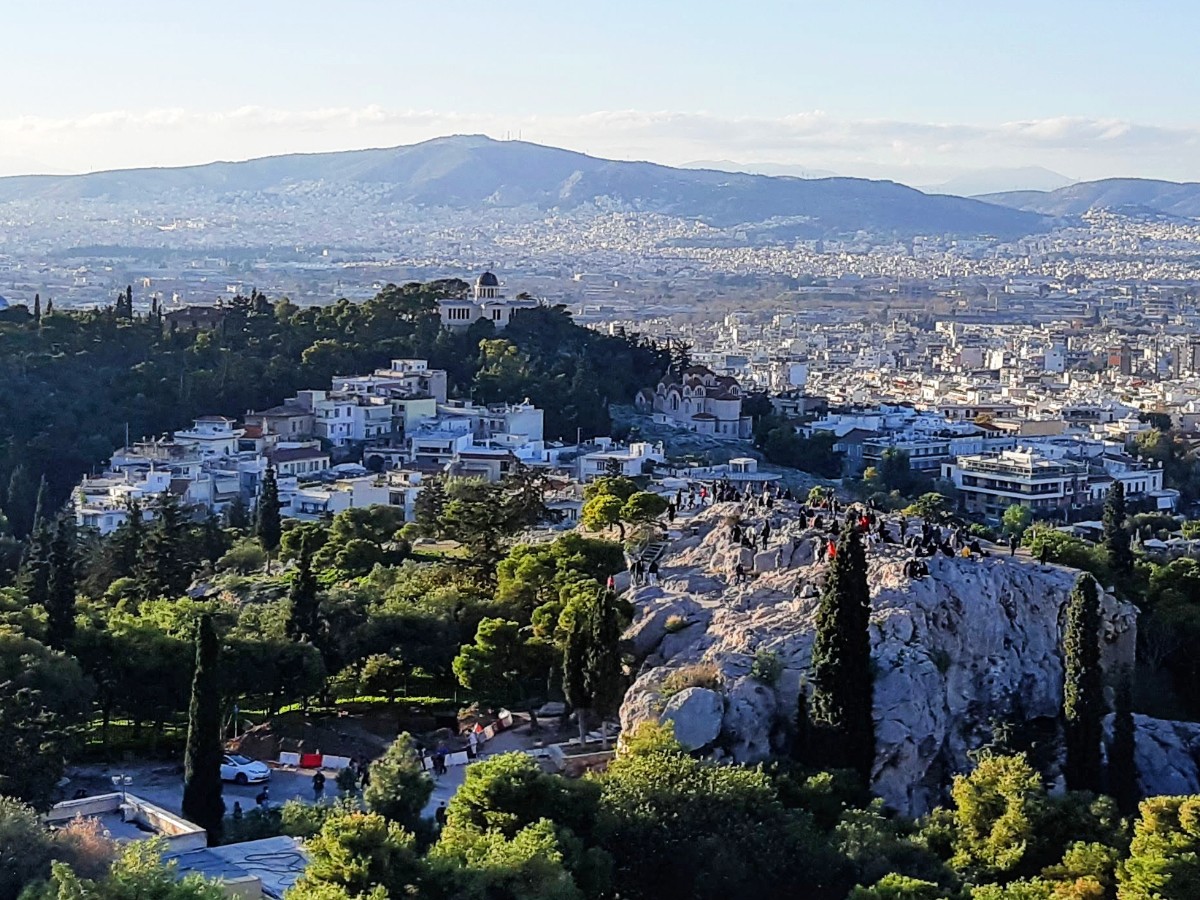 Areopagus, also known as Mars Hill, is a rocky outcrop close to the Acropolis Hill in Athens, Greece. Here is some information about this ancient landmark.

Athens in Greece is well known for its ancient history. Visitors travel from far and wide to see archaeological sites like the Acropolis and the Ancient Agora.

Apart from the ancient monuments, the historic centre of Athens is full of green areas, pedestrian streets and many hills. 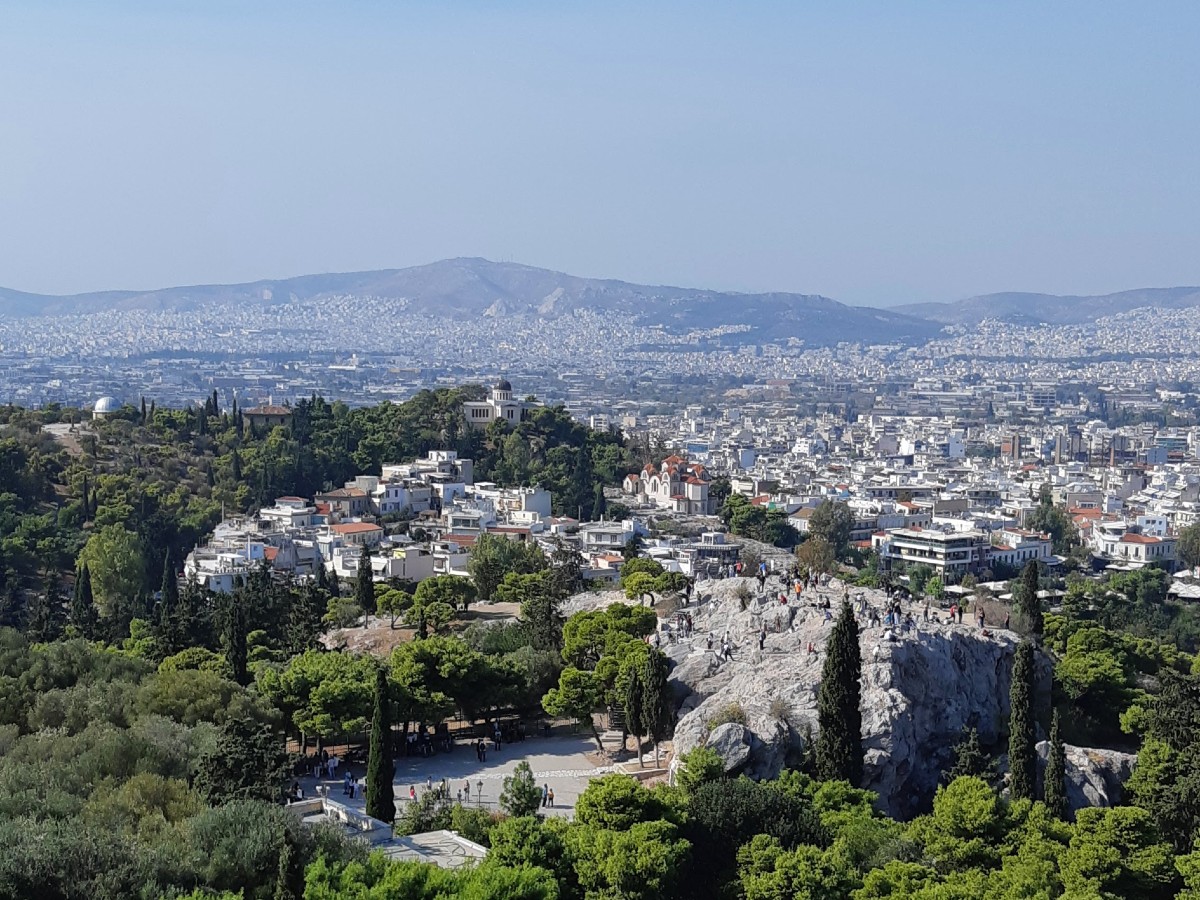 One of the most iconic hills in Athens is Areopagus, known in Greek as Areios Pagos. Offering spectacular views of the Acropolis, it’s a well-visited landmark by tourists and locals alike.

The word “Areopagus” is related to the ancient Greek God of War, known as Ares in Greek, or Mars in Latin. Let’s find out how Areopagus hill took its name!

Ancient Greeks believed in the 12 Gods of Mount Olympus. These deities, who ruled the ancient world, shared several human traits. Their king was the mighty Zeus, well-known for his infidelity towards his wife, Hera.

Many of the gods and goddesses had several children, often out of wedlock. Among others, Poseidon, the God of the Sea, had a son named Halirrhothius. Ares, who was Poseidon’s nephew, had a daughter named Alcippe.

According to legend, Halirrhothius tried to rape Alcippe. Her belligerent father imminently confronted him, and didn’t hesitate to kill him. Poseidon, sad and offended, demanded that the God of War be punished.

The first court in Ancient Athens

To bring Ares to trial, the twelve gods founded the first court in history up on a hill in Ancient Athens. This is the exact hill that we call Areopagus Hill, or Mars Hill, today. 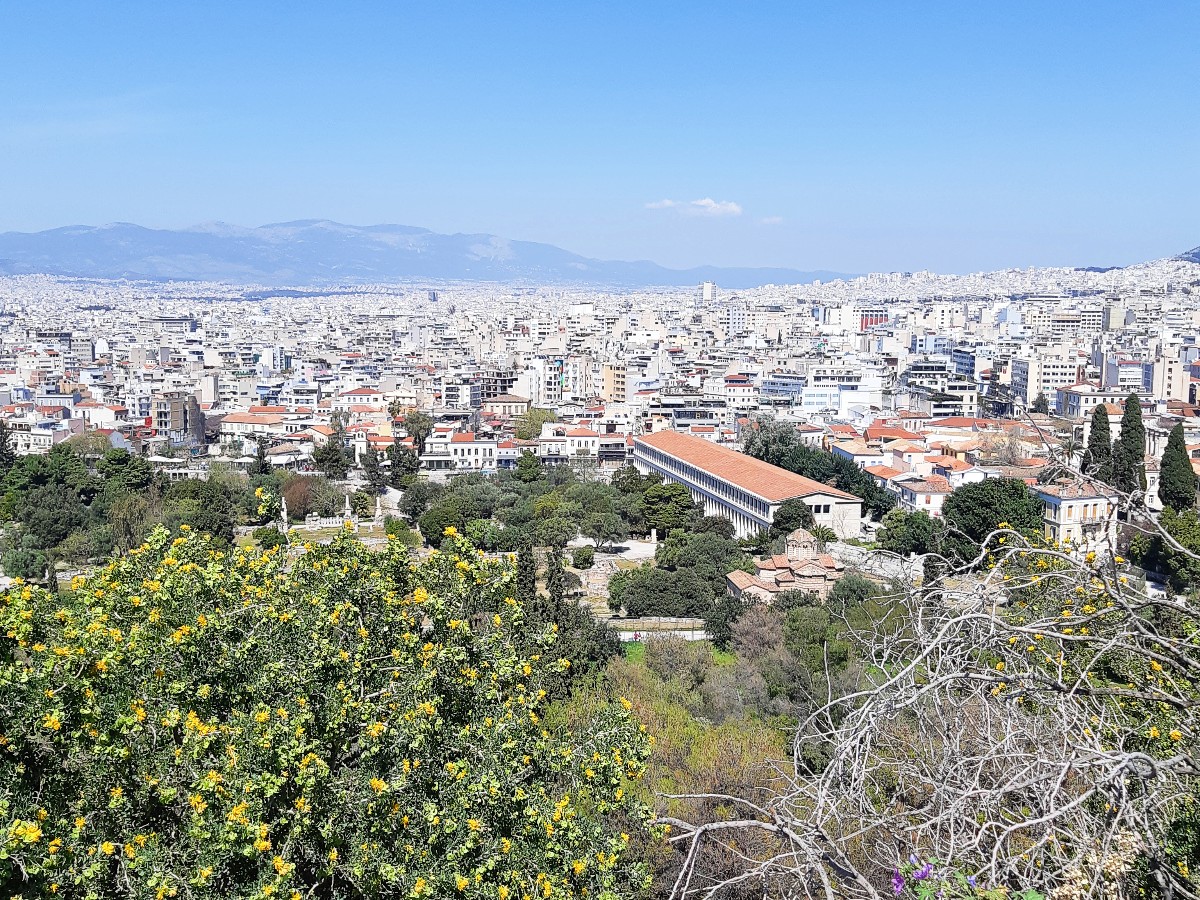 During the trial, things didn’t go as Poseidon expected. Taking into account the hideous crime that Halirrhothius had committed, all the other gods found Mars innocent.

Ares felt vindicated towards his uncle – justice had been served. According to one version of the story, he hit the rock hard with his spear, telling Poseidon that he wished he could pierce him as well. Such was his anger against his uncle.

So, when did this mythological event happen?

Alcippe, Ares’s daughter, was the grand daughter of Cecrops, the founder of the city of Athens. The mythical king, who is depicted as half-human and half-serpent, was involved in the famous dispute of Athena and Poseidon.

Hence, Areopagus first functioned as court several centuries before the Acropolis was built – maybe around 1,500 – 1,300 BC. 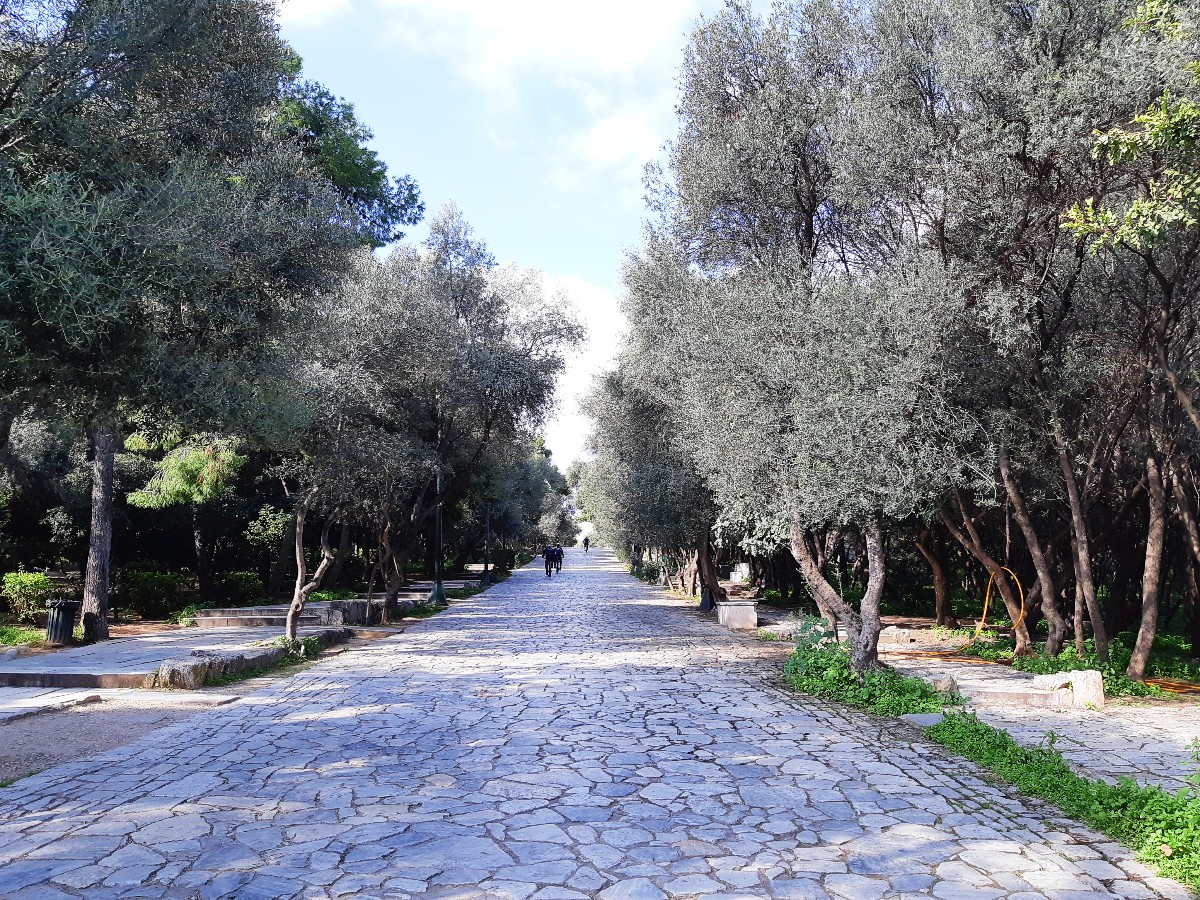 During those times, Ares Hill was also the place of worship for three female cthonic deities called Erinyes or Eumenides. They were the mythical goddesses of vengeance, and they tortured mortals who were found guilty of certain crimes.

Another famous murder trial that took place on the Rock was the trial of Orestes, who had killed his mother, Clytemnestra. The Erinyes pursued him until the trial, and this incident inspired Aeschylus to write his famous tragedy, the Eumenides.

And now that we’ve covered the mythological origins of Mars Hill, let’s check some historical facts.

The importance of Areopagus in ancient Athens

According to historical evidence, Areopagus became the supreme court of Ancient Athens for homicide trials in the 7th or 8th century BC. 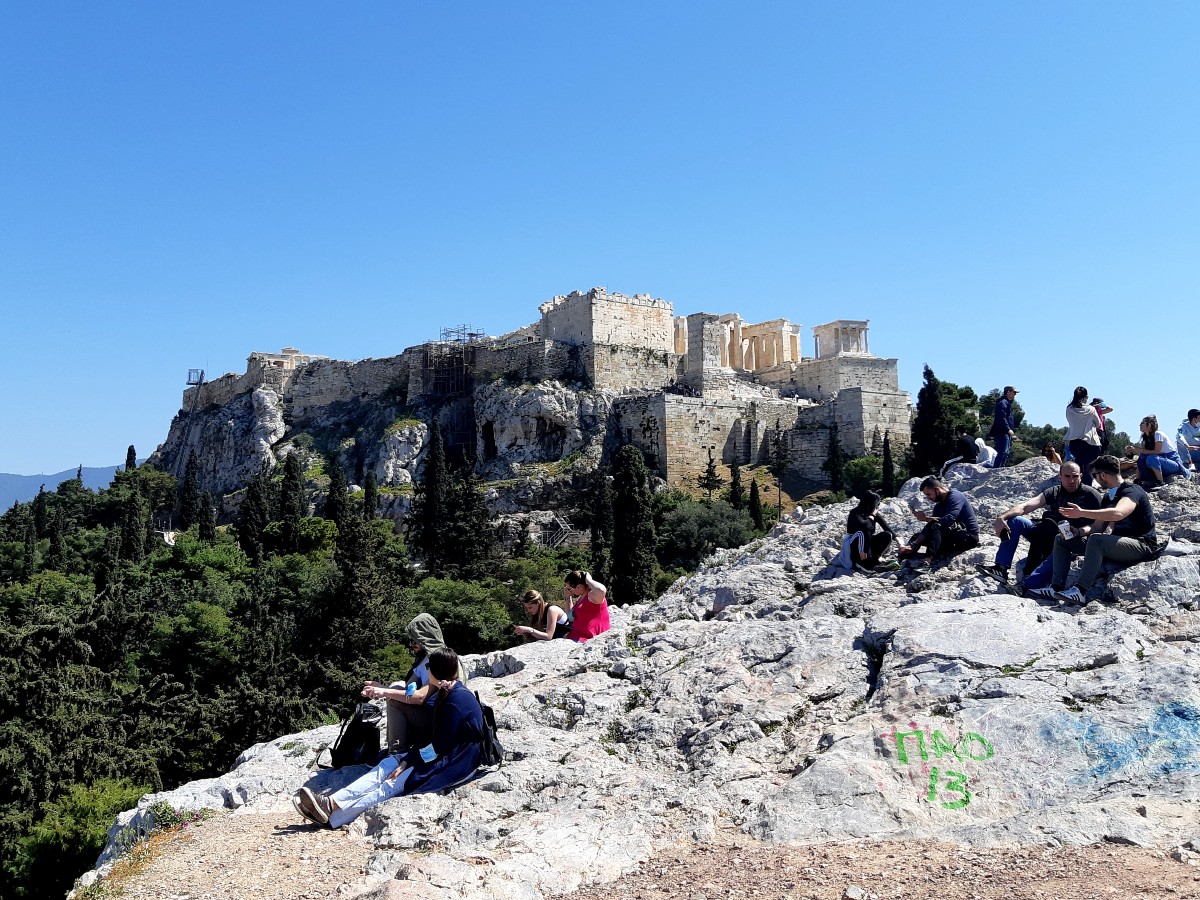 Its members, called Areopagites, had aristocratic background. They had previously served as chief magistrates (archons) in Athens, and probably had lifelong tenure.

The court was primarily reserved for trials of murder. Over the centuries, cases of treason and bribery were also taken to the council of elders on occasion.

As a side note, there were numerous other courts in Athens. The most important ones were Boule, Heliaia and the Popular Assembly / Ekklesia of Athens.

In Roman times, Areopagus remained a powerful and prestigious institution, with various religious and administrative functions.

This brings us to the early years of Christianity. Shortly after the death of Jesus Christ, the holy apostles set out on a mission to spread His word all around the world.

In 51 AD, Apostle Paul reached Athens. He had the chance to visit the Ancient Agora, the popular meeting place, and converse with the Stoic and Epicurean Greek philosophers and other Athenians. 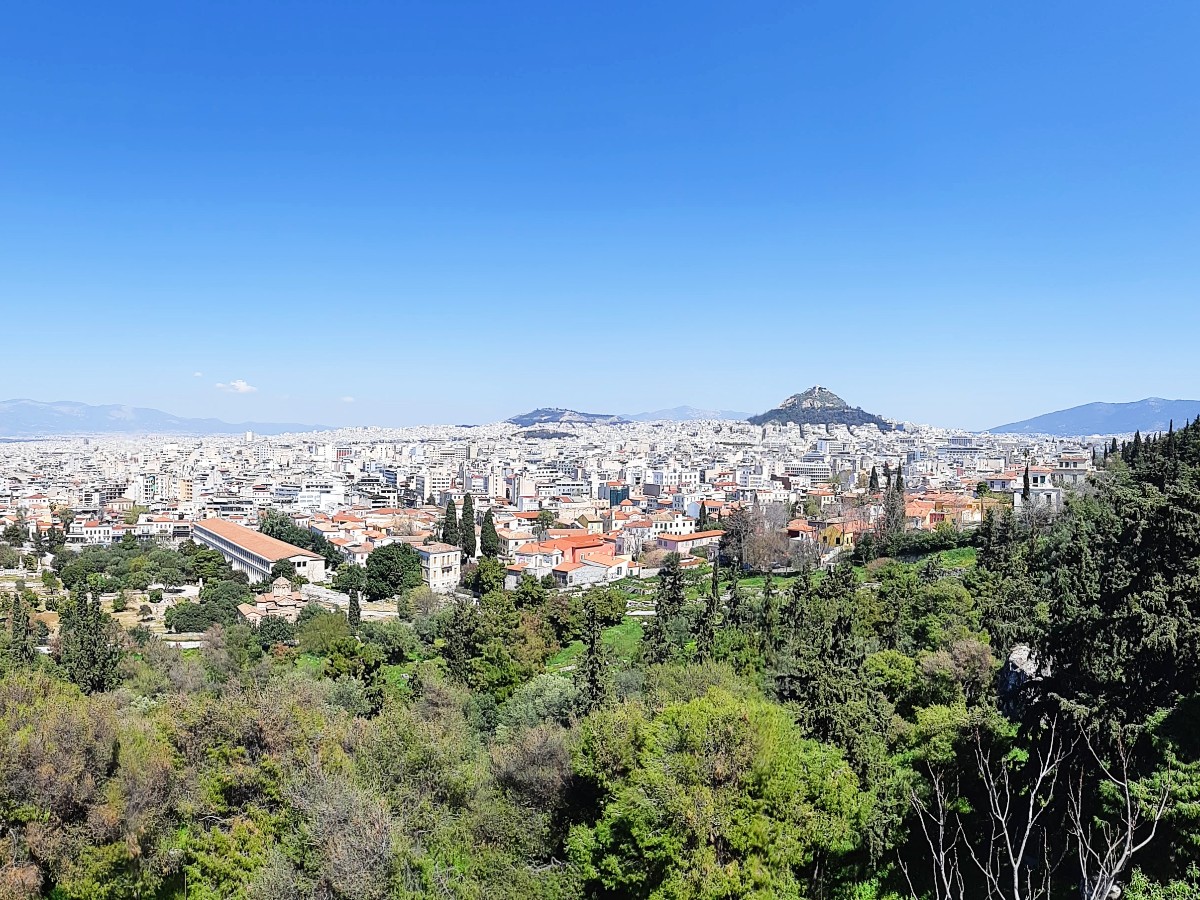 Paul was confused with the number of gods that were worshiped in the ancient city. Likewise, ancient Athenians were surprised to hear him talk about the death and resurrection of Jesus Christ.

Eventually, Paul was invited to deliver an official sermon on Mars Hill. (Note: According to some other accounts, Paul did not speak on the rock itself, but spoke before the Areopagus council, inside the Ancient Agora).

Paul delivered a speech full of arguments that were meant to diffuse the words of God and convert the citizens of Athens to Christianity.

Paul’s Sermon and the Unknown God

In his Areopagus sermon, Paul starts by acknowledging that Athenians are very religious. He then observes that, while walking around the city, he had found an altar with the inscription “to the Unknown God”.

Paul proceeds to explain that this God, whom Athenians worship in ignorance, is the Creator and Lord of the whole world, but does not dwell in temples built by hands.

The apostle announces that God calls everyone to repentance, and that there will be a judgement day. The judge will be a man whom God has appointed for this purpose and has raised from the dead – Jesus Christ.

Overall, Paul’s message was not very well received, as the Athenians did not believe in the concept of a resurrection. Only a few people converted – among them a prominent Athenian, Dionysius the Areopagite, and a woman named Damaris.

Today, you can see a bronze plaque with Paul’s words, right next to the hill. The apostle delivered his speech in Koine Greek, which was his native language. 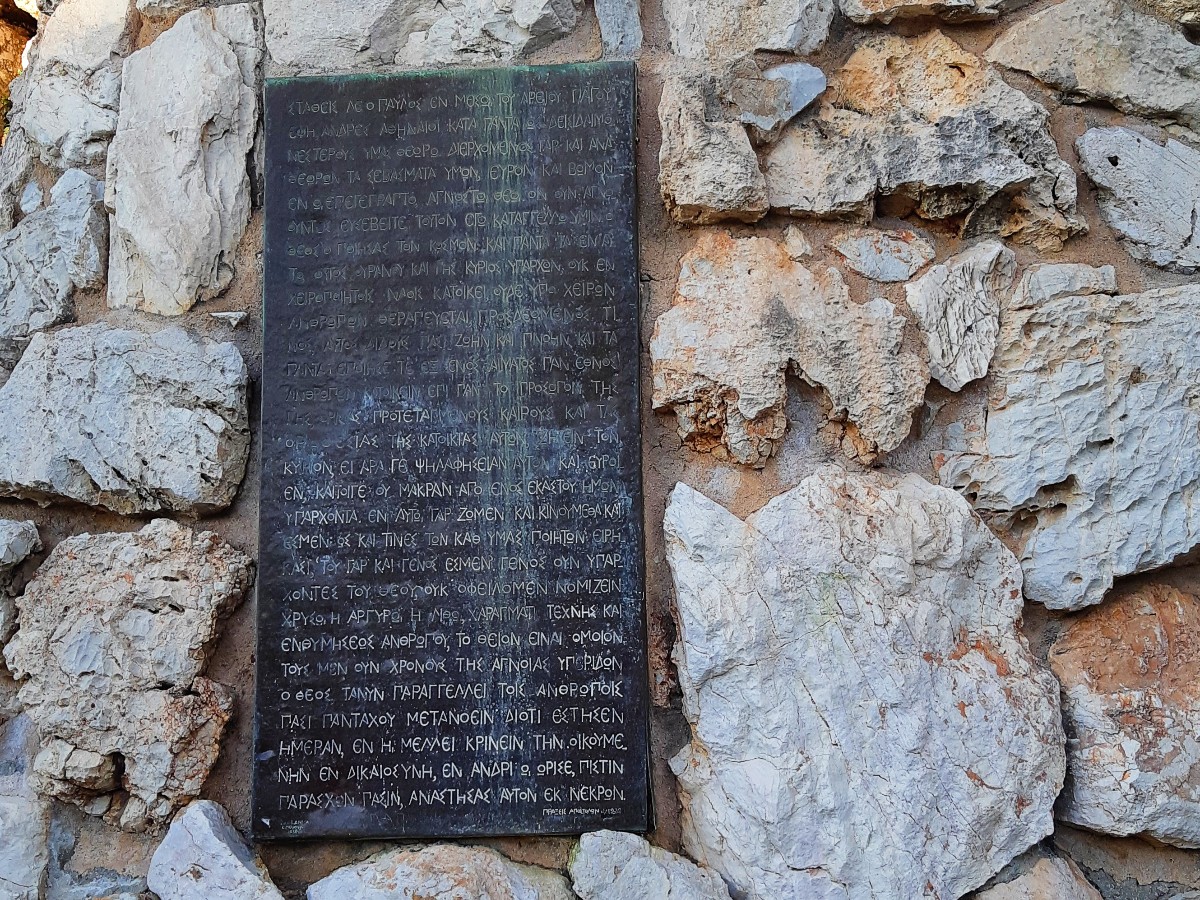 Two big cathedrals in Athens are dedicated to St Dionysius, who became the city’s patron saint. He celebrates on the 3rd of October every year, with religious ceremonies and festivities.

The Areopagus is a popular site to visit. Its location to the north west of the Acropolis hill offers great views of the ancient citadel, the Athenian Agora and the whole city. 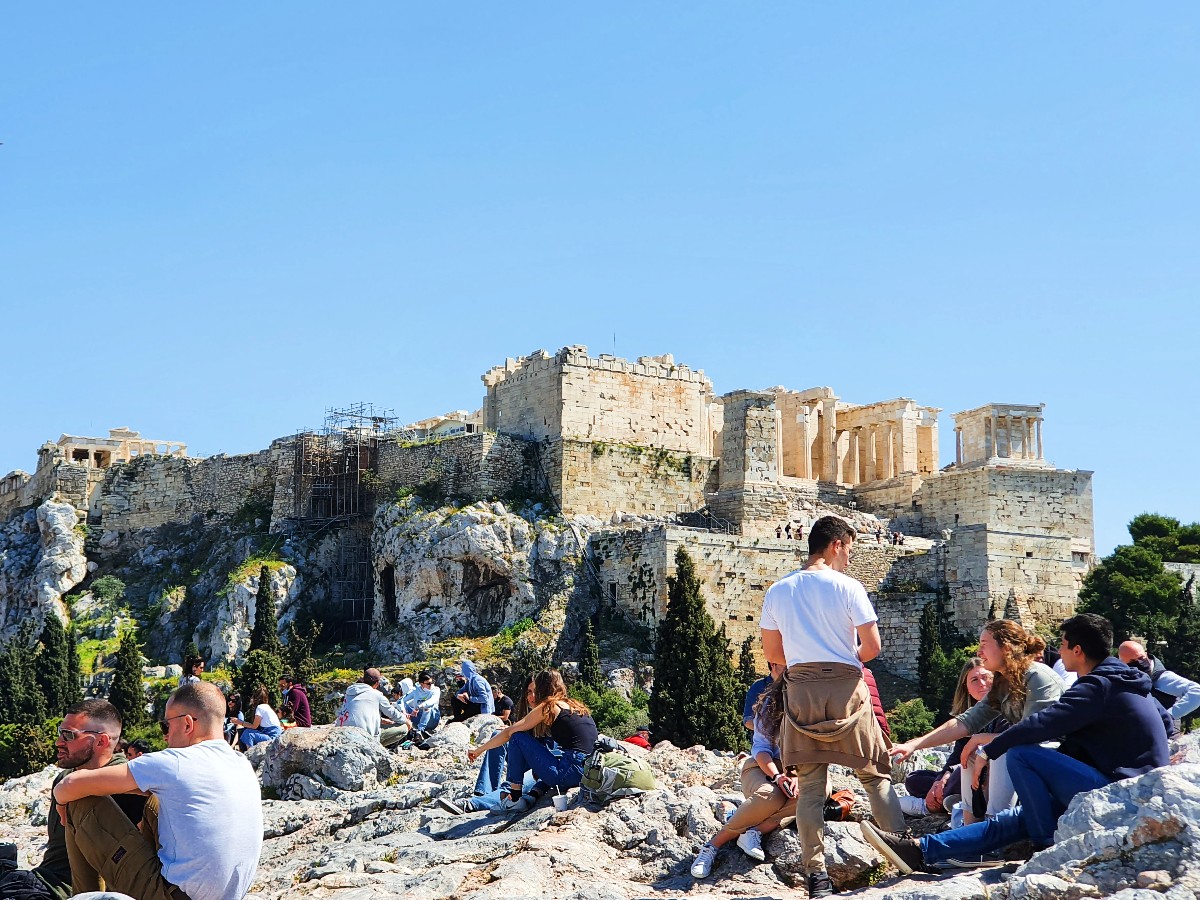 The setting is really breathtaking, making it a popular spot with people living or passing through Athens. Entrance is free, and the site is always open.

One of the best times to visit is at sunset, just before the lights at the Acropolis are turned on. Or if you are a morning person, you can visit at sunrise, and see the city under a different light.

There are two sets of staircases that you can climb to get to the hill. Use the metal one, on the left, as the stairs on the right are very slippery. It’s best to wear flat shoes as the surface on the rock is uneven.

The closest metro stations are Acropolis and Thissio, and you can easily walk on the pedestrian street, Dionysiou Areopagitou / Apostolou Pavlou, which has been named after Dionysius the Areopagite and Paul.

If you walk on this street, you can see Ancient Athens for free.

And now for some geekery… Let’s look into what the words “Areios Pagos” mean in Greek!

The word “Areios” most likely comes from the word “Ares“. It might also be related to the “Ares Erinyes“, the goddesses of vengeance.

The word “pagos” means anything firm, fastened or solid – in this case, a solid marble hill, or a rock.

Incidentally, this is where the Latin words “pactum” and “pax” come from – as well as the modern-day words “pact” and “peace”.

Who would have thought that the murder court called “Ares rock” could, effectively, be related to peace!

Here are some questions that visitors often ask:

Where is the Hill of Ares?

The hill of Ares, also known as Areopagus, Areios Pagos or Mars Hill, is in central Athens Greece, a short walk from the Acropolis.

Is the Parthenon on Areopagus?

The magnificent temple of Parthenon is up on the Acropolis complex. If you climb up Areopagus hill, you will have wonderful views of the whole Acropolis citadel, as the two sites are only a short distance away from each other.

What was the Areopagus in ancient Athens?

Areopagus was the supreme court of ancient Athens, dealing predominantly with murder crimes. Other courts included Heliaia, Boule, and the Popular Assembly / Ekklesia of Athens.

In 51 AD, apostle Paul preached on Mars Hill. His famous sermon on Christianity and religious matters is inscribed on a bronze plaque right next to the hill.

Do you need to book in advance to visit Areopagus?

Areopagus is free to visit, and is open 24/7. However, if you want to get a better idea of ancient Athens and find out some more stories, you can always book a guided tour to Ancient Athens.

Private guided tour to Acropolis and other ancient landmarks

I hope you’ve enjoyed this article! Here are a few more that you might find interesting:

Hi! I’m Vanessa from Athens, and I love exploring my city and writing about it. Mars Hill is one of my favourite spots in the city, especially during sunset. When you are in Athens, make sure you climb up to take in the fantastic views, and try to imagine how trials happened over 2,000 years ago! For more info on Athens and Greece, follow my FB page.