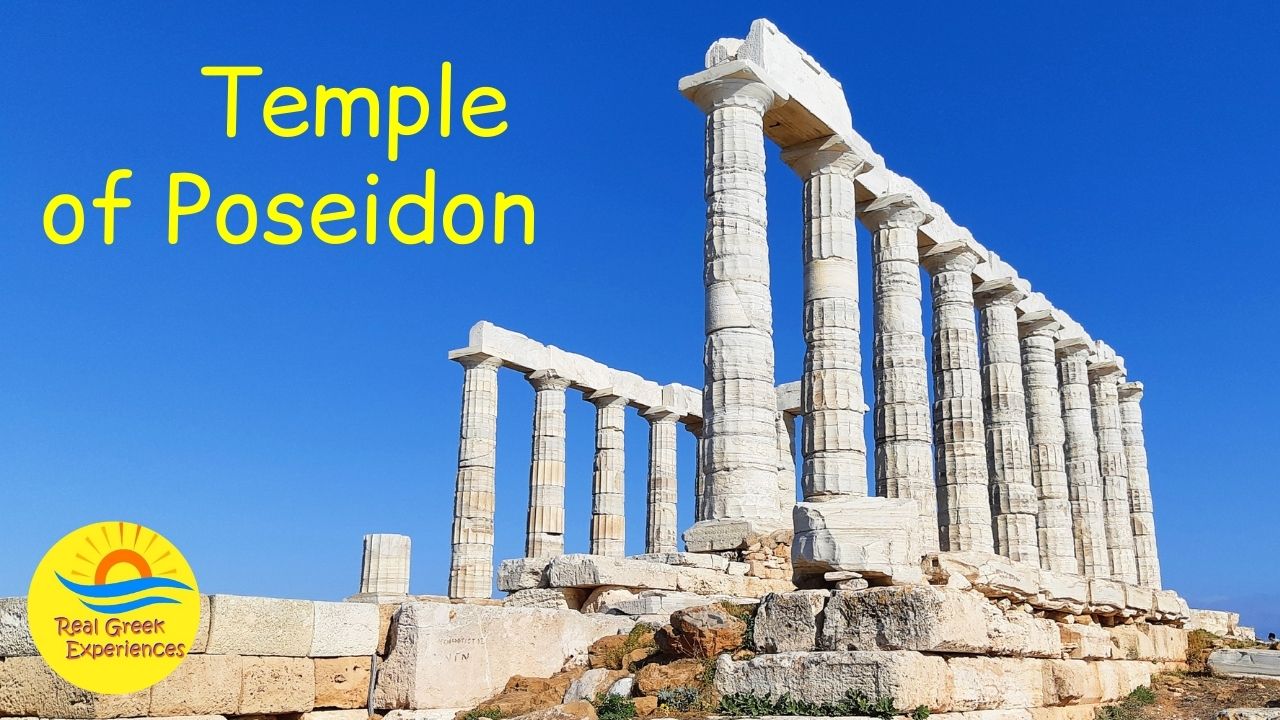 The Temple of Poseidon at Sounion is an easy half-day trip from Athens. Here’s everything you need to know about planning a Cape Sounion sunset tour in 2023.

The Temple of Poseidon at Cape Sounion

The Temple of Poseidon at Sounio is one of the most majestic temples in the whole of Greece. It is located at the southernmost tip of the Attica peninsula, about 70 kms (43.5 miles) out of central Athens.

No Greek God or Goddess could have asked for a better spot to have a temple built in their honor. Cape Sounio is surrounded by steep rocks, offering spectacular views to the Aegean Sea.

In my opinion, it’s one of the most beautiful places to visit in Greece. 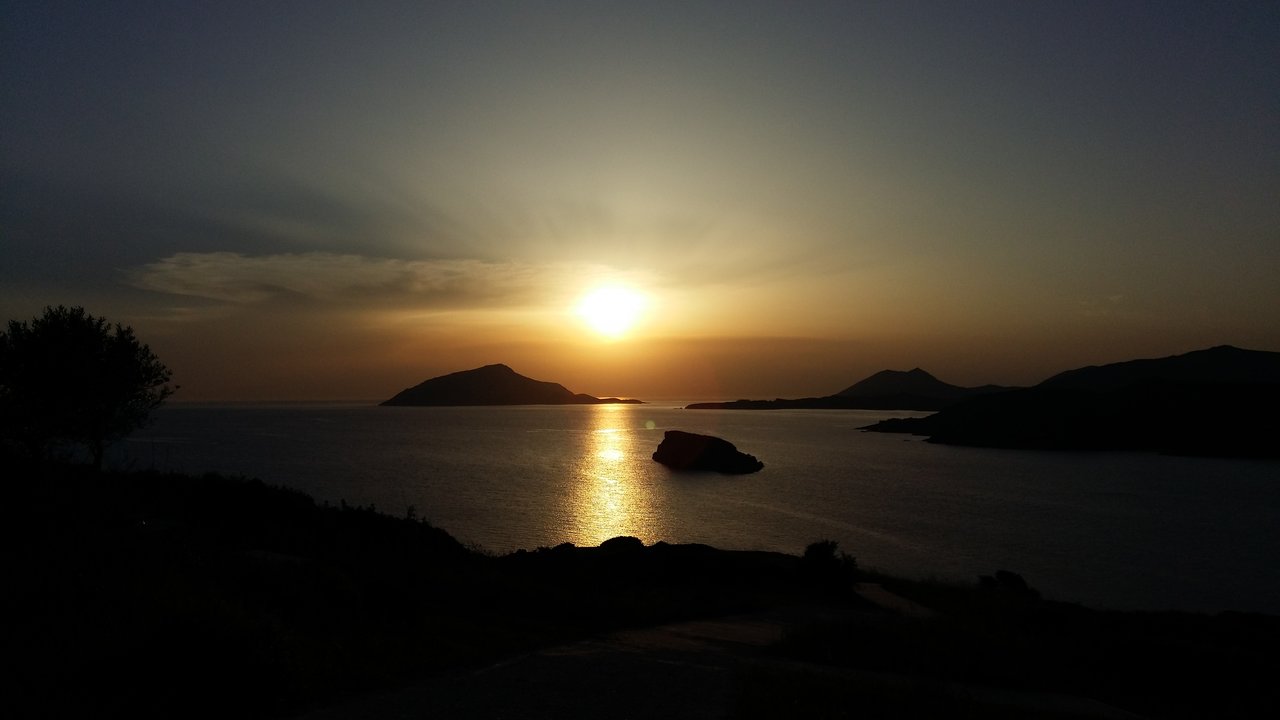 Many people prefer to visit the ancient site during the evening, when the sun sets behind the temple and illuminates it in a beautiful orange hue. Watching the sun set from the top of the cliff is an unforgettable experience.

There are three ways to visit the Poseidon temple: by public transportation, rental car, or an organized tour / taxi / private transfer.

Take the KTEL bus to the temple of Poseidon at Sounion

Public buses to Sounio depart from a bus stop opposite Pedion tou Areos, close to Victoria metro station on the green line. (A guide here on how to use the metro in Athens).

These buses are known as KTEL buses, and they take around 2 hours to get to the temple, or longer during peak hours. On summer weekends, when Athenians go out to the beach, there will generally be more traffic. A one way ticket costs about 6.5 euro. 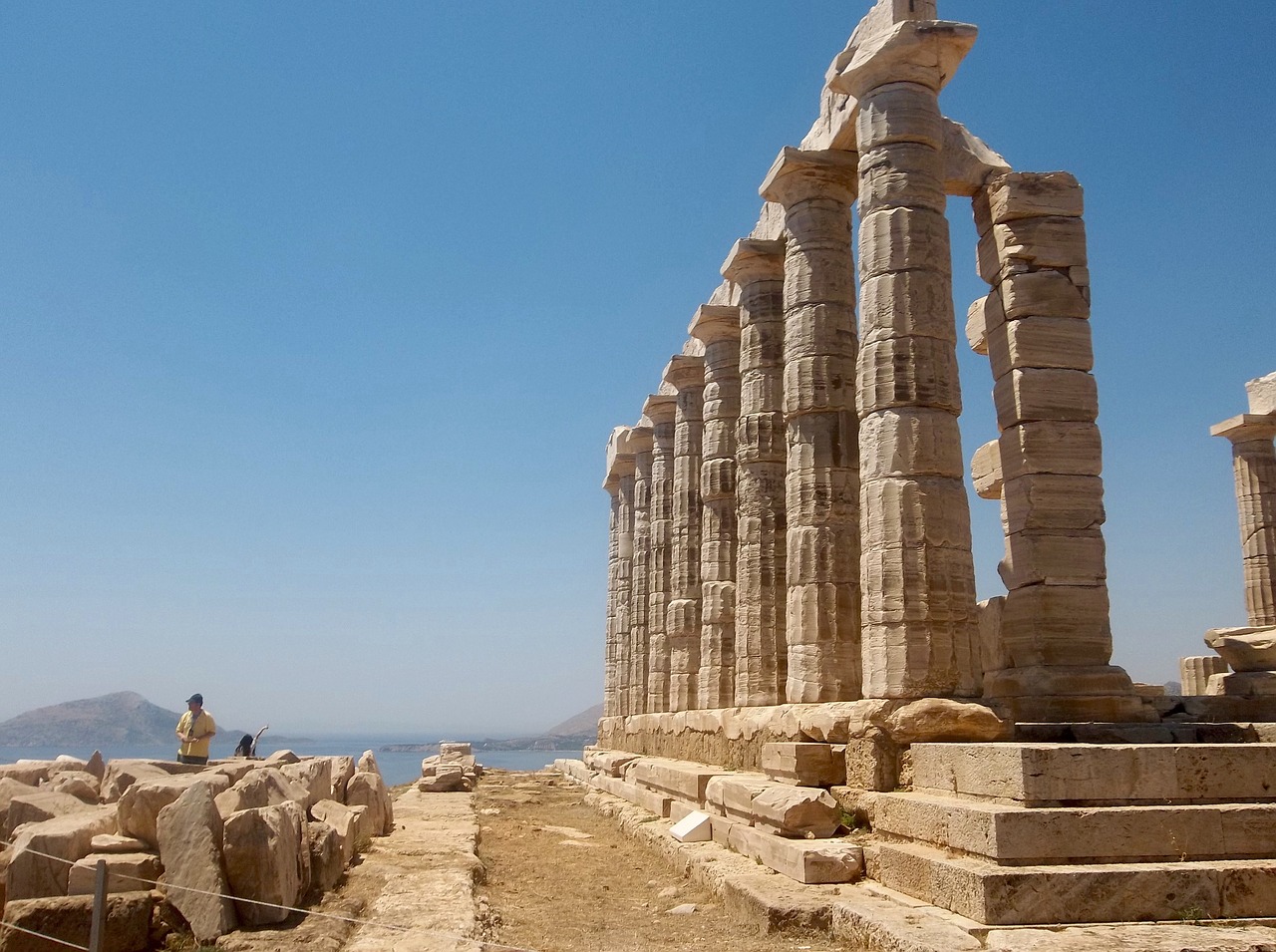 The bus timetables are seasonally adjusted, and there are fewer routes during the off-season. You can find bus timetables here, though unfortunately the website is not regularly updated. In fact, your best best would be to call and ask.

If you visit Cape Sounio by bus, you will need to make sure that you don’t miss the last bus to return to Athens, as there are very few hotels in the area.

Rent a car and drive to Cape Sounio

Another way to get to the temple of Poseidon at Sounion is to hire a car. This way, you will have more flexibility and you won’t worry about the return bus back to Athens, especially if you want to stay for sunset.

Check out DiscoverCars to compare prices and car models, and book a vehicle.

The coastal route on the way to Sounio, known as the Athens Riviera, is very scenic, and you will enjoy lovely views of the Aegean. There are many hidden coves and sandy beaches along the way, where you can stop for a swim. 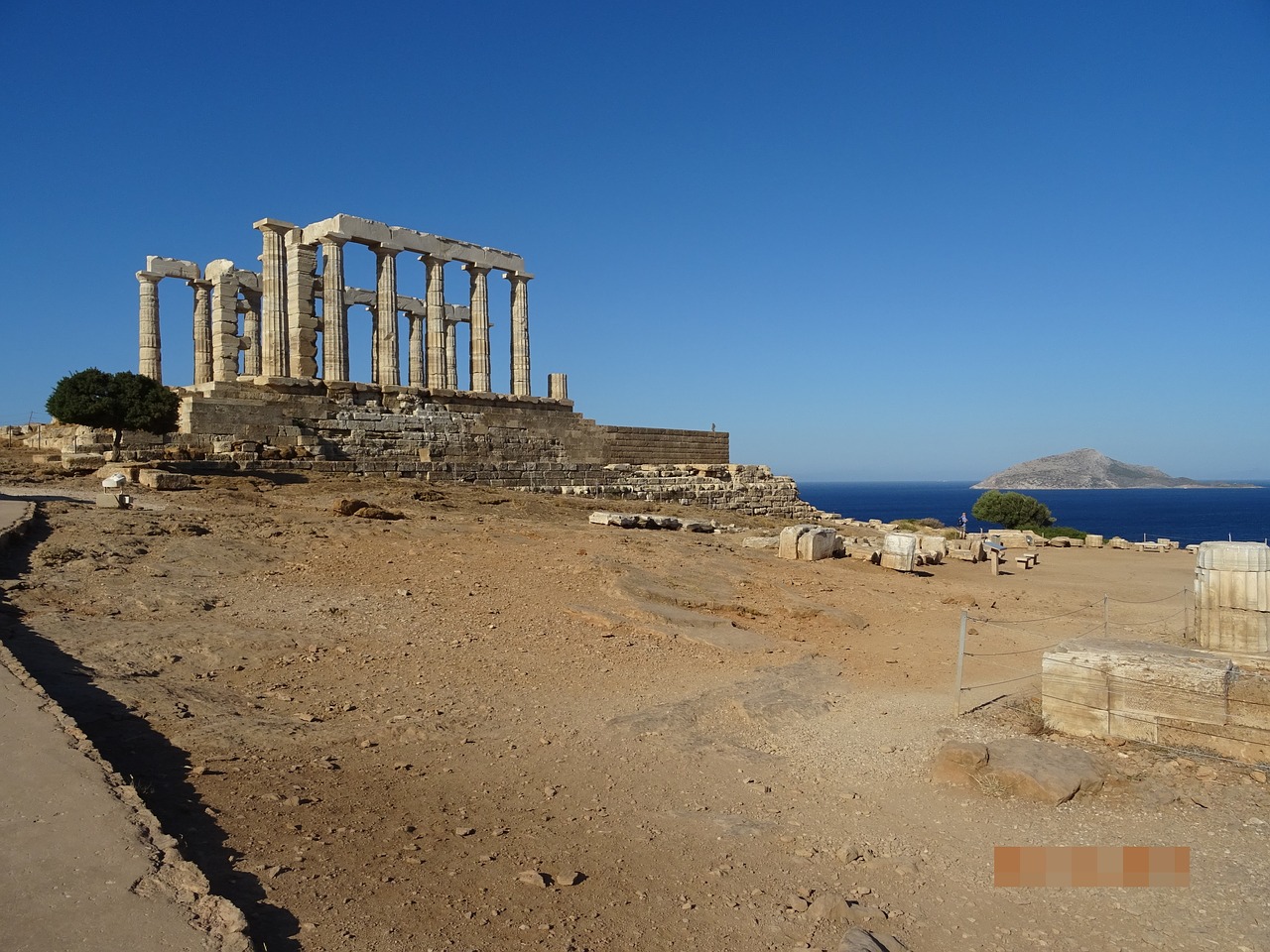 It will take you about an hour and a half to get to the temple from the Athens centre. Free parking is available outside the site.

You can then go for lunch / dinner to the nearby port town of Lavrio, known for its wonderful fish tavernas. There’s also the – rather indifferent – Akrogiali restaurant on the small beach nearby, close to hotel Aegeon Beach.

If you are thinking to drive to Sounio, you should know that the coastal road to Sounio has many twists and turns, and is narrow at times. 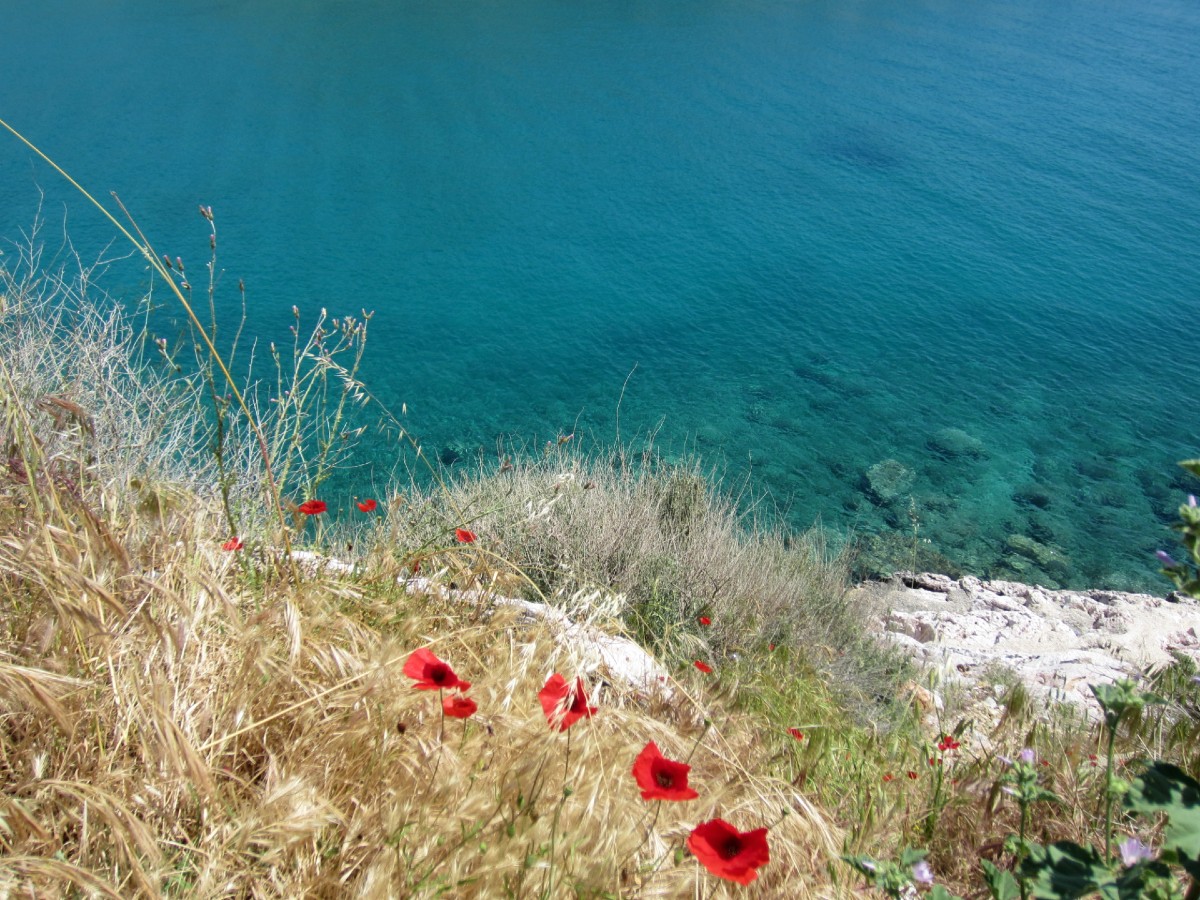 If you are coming back after dark, pay extra attention, as long parts of the road are poorly lit. Or you could take the inland route, which is not very picturesque but it’s much smoother to drive.

One more thing to consider is that Greeks are pretty fast drivers. In my experience having driven this road dozens of times, there are always people speeding or driving in the middle of the road.

This article on driving in Greece will give you an idea of what to expect.

Another option is to take a half-day tour to Sounion. There are numerous companies offering this service, as a group tour or a private tour.

Sometimes you will have a tour guide who will show you around the Poseidon temple. Other companies will leave you to explore the site at your own pace. Read the tour descriptions carefully!

If you want to catch the sunset from the temple of Poseidon, make sure you choose one of the evening tours.

Here are a few tour options:

Visiting the Temple of Poseidon, Sounion

Once you have arrived at the parking area, make sure you park the car safely. There are some toilets here if  you need them, and note that there aren’t any inside the ancient site. There’s also a cafe where you can have a coffee or drink.

You will then need to enter the site, pick up your ticket, and go up the hill to get to the imposing temple. The path is not flat, but it’s not as steep as the path leading up to the Acropolis Hill.

The temple is built on the highest point of the hill. Out of the 34 original marble columns, 15 are still standing. Some people might spot the name “Byron”, which is carved on one of the columns, a sign that Lord Byron was here. 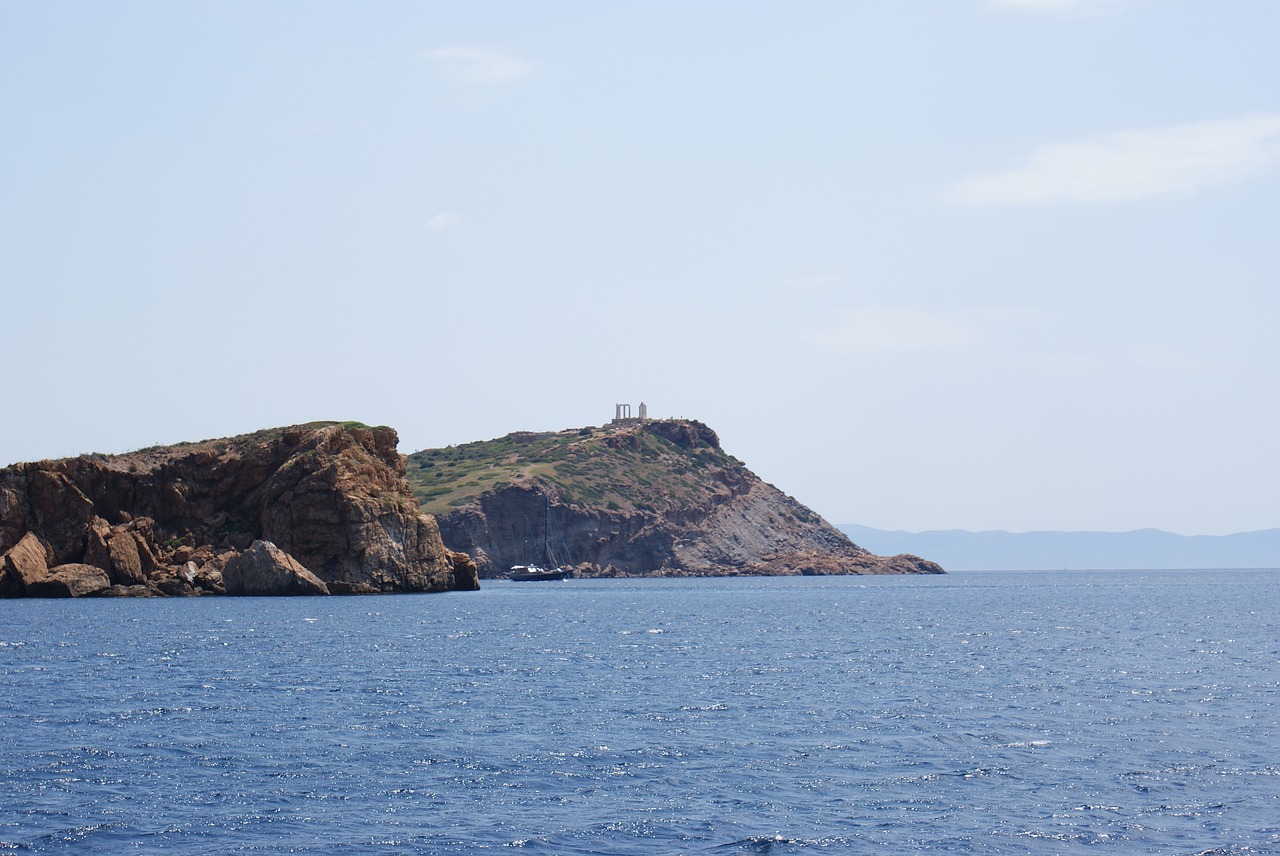 The views to the sea are really out of this world, and in my opinion this is what makes the temple of Poseidon so special. I’m sure the God of the Sea was very happy to have his temple built on this spot!

There are various trails and paths leading down to the side of the cliff. It’s worth following one or two of them and spending some time looking out to the sea, especially when it’s close to sunset.

Make sure you bring water, sunscreen, a hat, comfy shoes, and your camera!

Temple of Poseidon tickets cost 10 euro from April to October, and 5 euro from November to March. Entrance is free on certain days:

The Temple of Poseidon opening hours are from 9:30 to sunset, which is when many people try to visit.

And now that you know how to get to this wonderful temple and what to see, let’s have a look at some facts!

According to archaeological evidence, the wider area of Cape Sounion had been considered sacred since the Bronze Age.

Homer mentions Sounio in his famous poem, the Odyssey. It was one of the places where the Greek fleet stopped on their return from Troy. 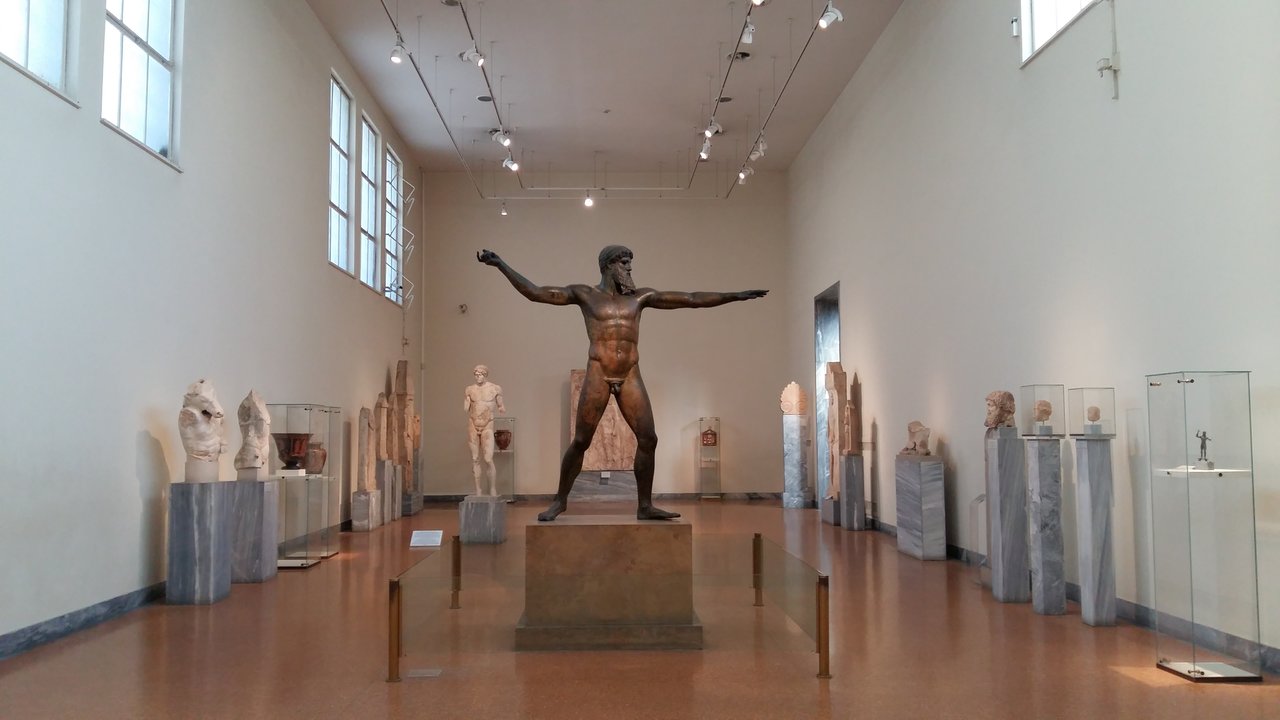 Is this the bronze statue of Zeus, or Poseidon? National Archaeological Museum in Athens

The temple of Poseidon is also the place where King Aegeus, the father of the hero Theseus, committed suicide jumping from the cliff, thinking his son had been killed by the Minotaur.

The Temple of Poseidon replaced an earlier temple

The existing Poseidon Temple was built between 444-440 BC, on top of the ruins of an Archaic temple. The white marble used for its construction came from the nearby town of Lavrion, which was best known for its rich silver mines. Remains of the older temple, dating from the archaic period, are not visible. 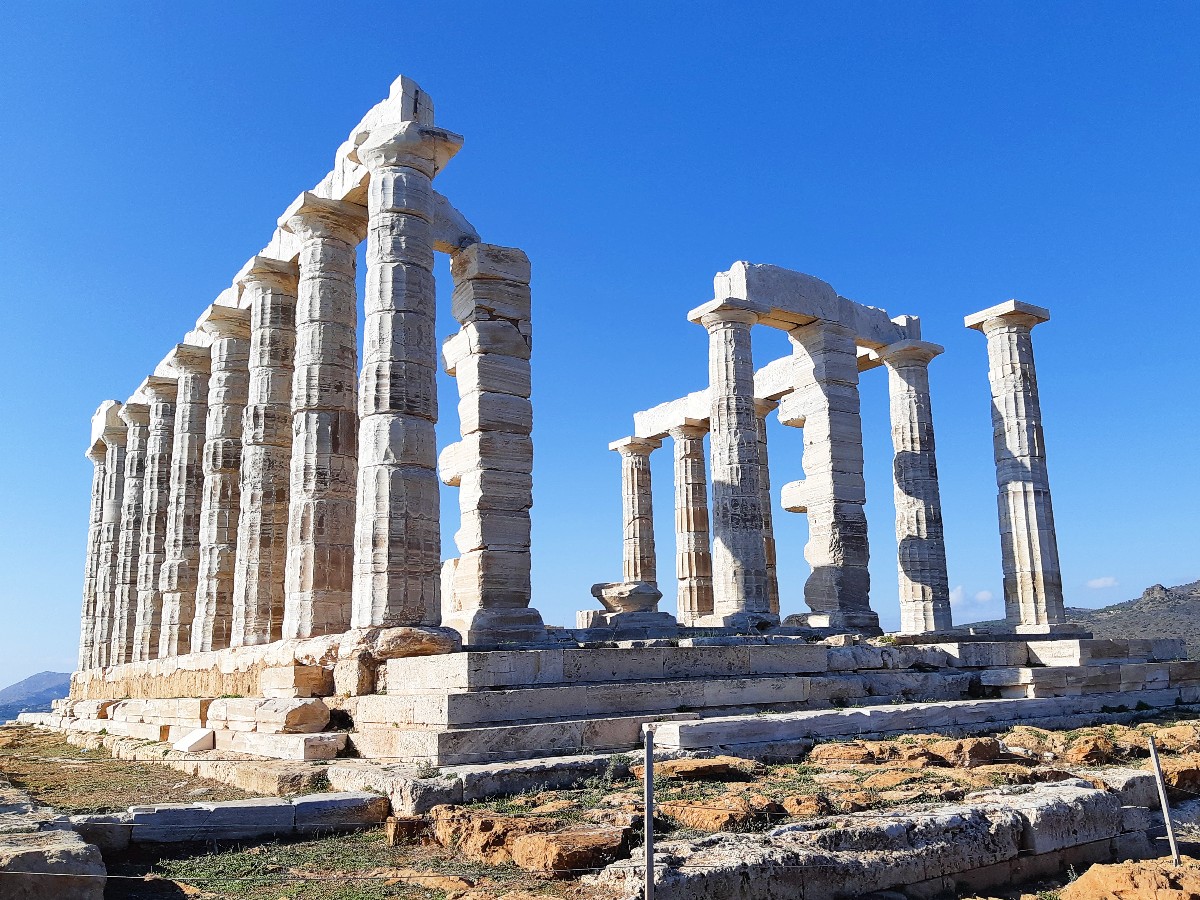 A couple of decades later, during the Peloponnesian war, the Cape was enclosed by an extensive wall, which was considered the strongest existing fortification in the proximity of Athens. Remains of these defensive walls still survive today.

Cape Sounion was a strategic spot for the city-state of ancient Athens. Any boat sailing towards Piraeus would pass by the cape. Moreover, the rich mines at Lavrion enabled Athens to achieve unprecedented wealth and power during the 5th century BC.

So who was Poseidon, and why was he so important in Ancient Greece?

Poseidon was one of the Gods of Mount Olympus, and the son of the Titans Cronus and Rhea. He is always depicted as a serious-looking, bearded man holding his powerful weapon, the trident. 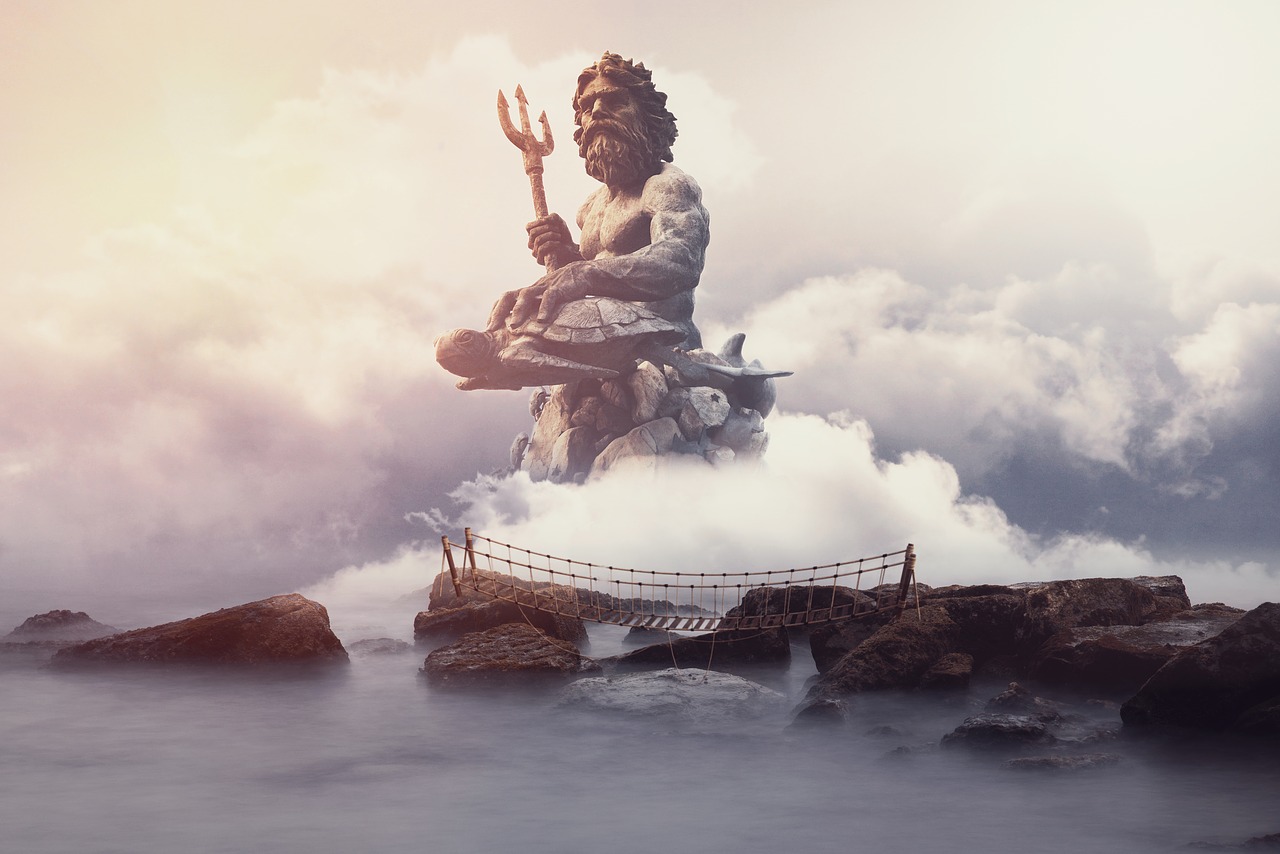 Among Greeks, Poseidon was known as the God of the Sea, and was responsible for the fates of sailors. He also controlled fresh waters, rivers, pools and lakes, and regulated earthquakes and natural disasters.

Finally, Poseidon was a fan of horses and horse races. His chariot was pulled by imaginary monstrous creatures, half-horses and half-snakes, while dolphins, fish and numerous other sea creatures followed along.

People worshiped the mighty Poseidon all around the Ancient Greek world. Many of his temples survive, not only close to the coast, but also up on the mountains, close to lakes and rivers.

A few trivia about God Poseidon

Like many other gods, Poseidon was particularly fertile. According to Greek mythology, he fathered over 100 children, with several goddesses and mortal women. At the same time, he was also attracted by men, such as Niritis and Pelopas.

Poseidon’s legitimate wife was Queen Amphitrite, with whom he had a son, Triton, and by some accounts a daughter, Benthesikyme. Pegasus, the flying horse, was the offspring of Poseidon and Medusa. 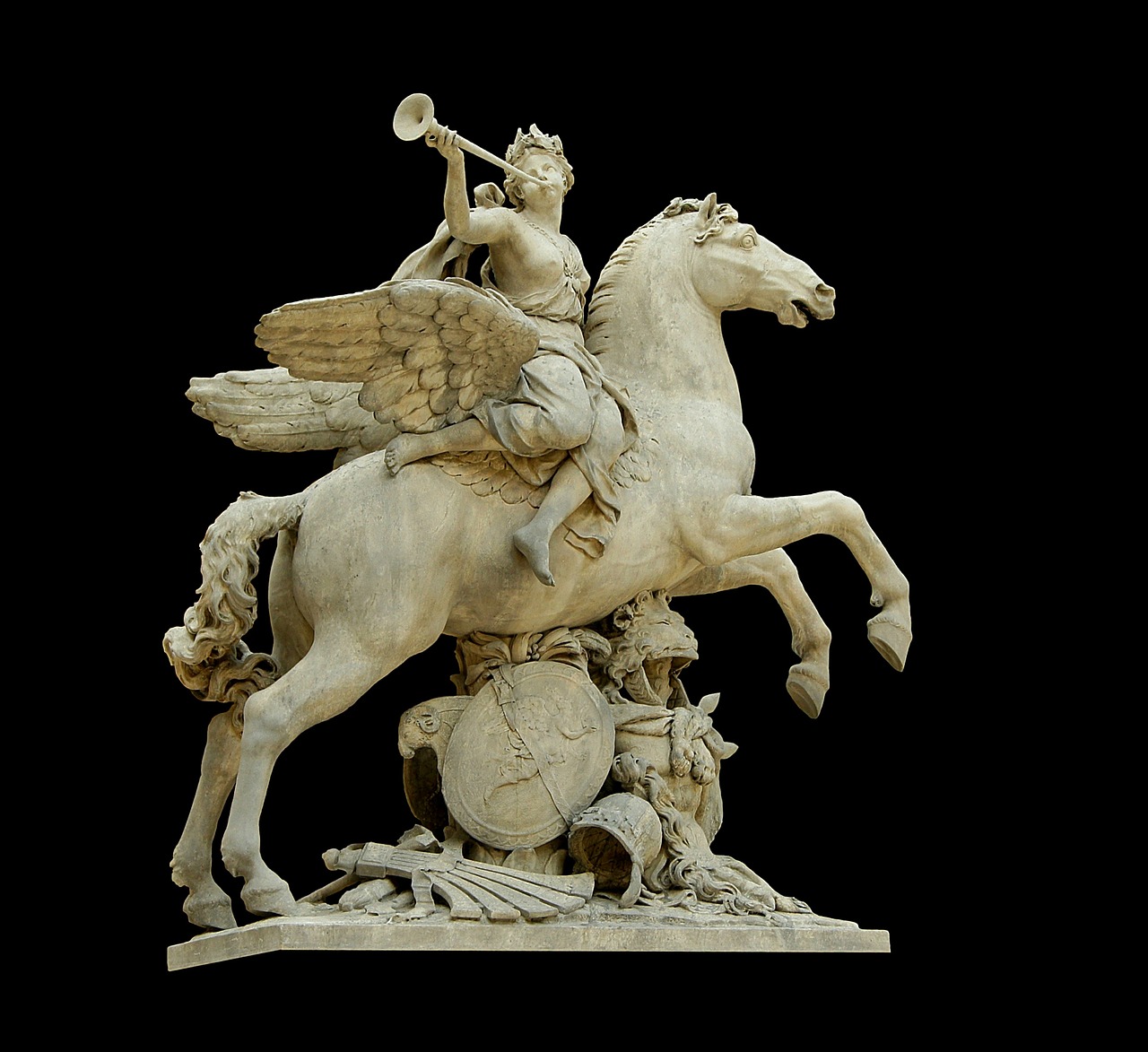 Unlike the children of Zeus, some of Poseidon’s descendants were evil and malicious. Allegedly, Poseidon himself killed some of his villainous sons, while others were eliminated by Hercules and Theseus.

There are hundreds of myths, stories and legends connected with the God of the sea.

An Athens temple for Athena and Poseidon

A famous story has to do with the myth of Athena and Poseidon, or how the city-state of Athens took its name. 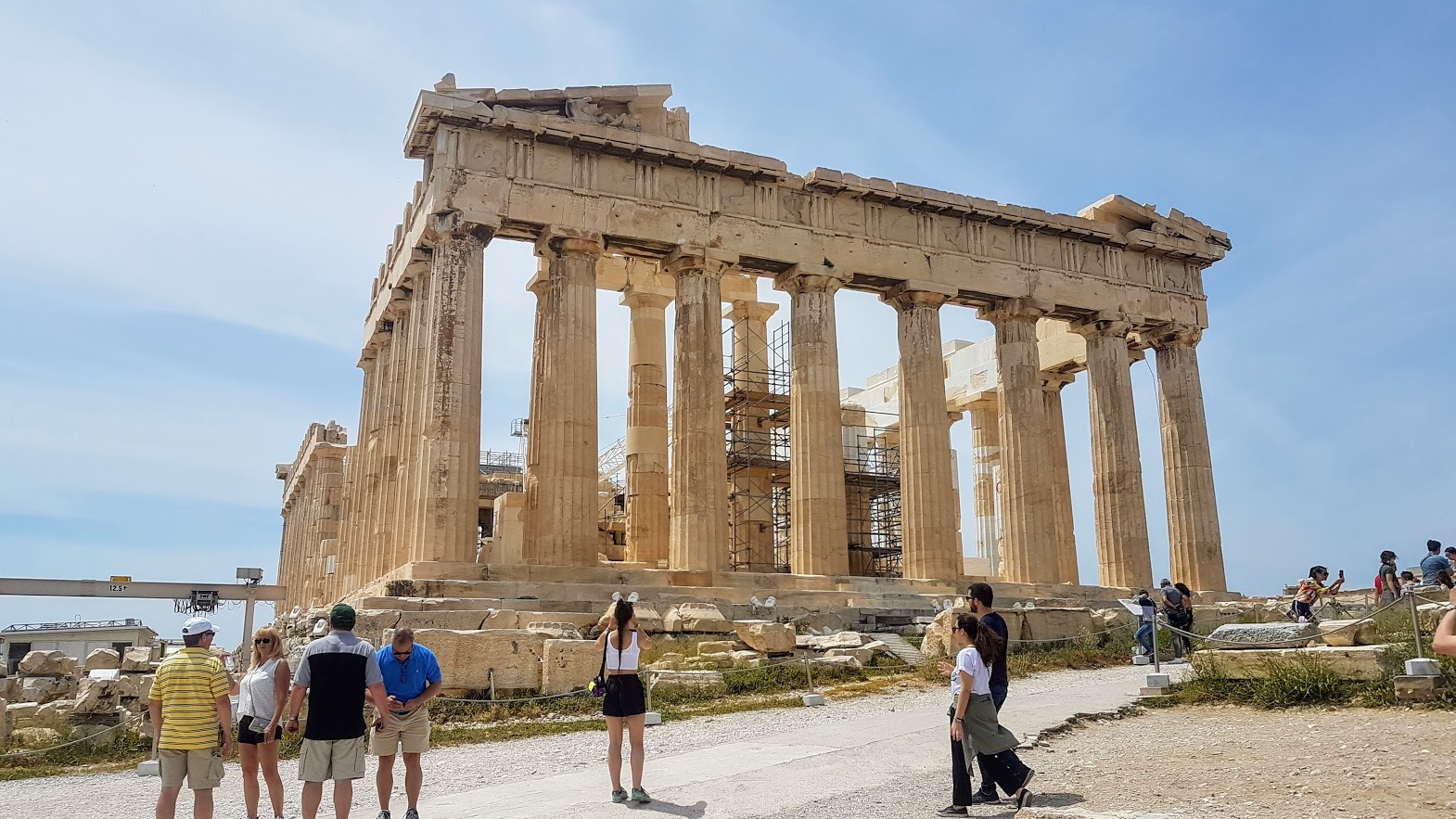 The two Gods competed over the powerful city state of Athens, and Athena won. The Athenians built the Parthenon, the most famous temple in the ancient site of the Acropolis, in her honor.

Poseidon was furious, and he used his superpowers to flood an area outside Athens, the Thriasian Plain. To calm him down, the Athenians built another temple, called Erechtheion, close to the Parthenon. This was a temple dedicated to both Athena and Poseidon.

Interestingly, no earthquakes have ever caused any damage to the Acropolis. This can be attributed to the fact that Ancient Greeks were excellent engineers. Or, maybe, the God of Earthquakes protected the ancient site, because his own temple was there. I’ll leave it to you to decide! 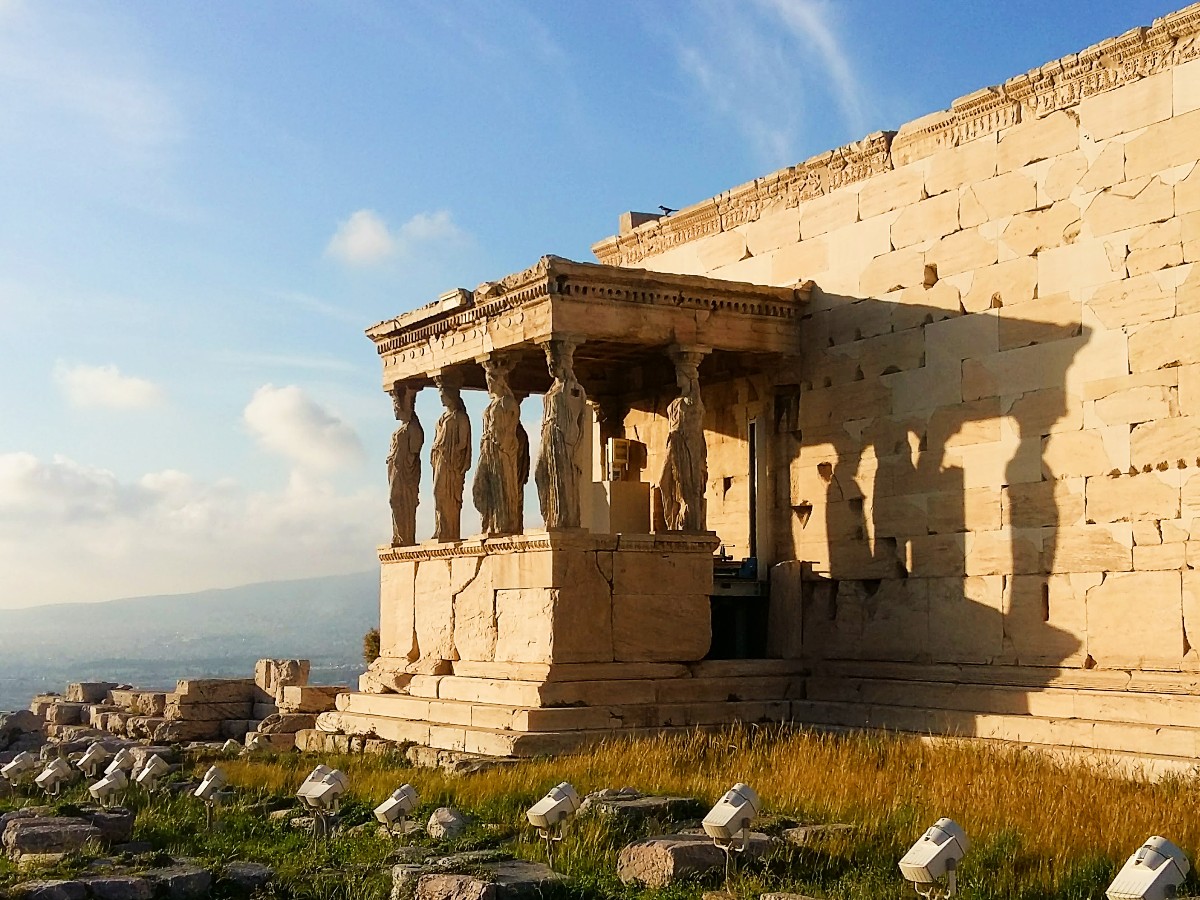 FAQ about the Temple of Poseidon at Sounio

Here are a few questions that visitors often ask:

Where is Poseidon’s temple located?

The location of Poseidon’s temple is about 70 kms (43.5 miles) south of central Athens.

How many columns did the Temple of Poseidon have?

In ancient times, the temple of Poseidon had 34 columns made out of white marble. Out of those, fifteen survive today. On one column, you can spot the name of Lord Byron, the famous English poet, who visited the ancient temple in 1810.

Is the Temple of Poseidon worth seeing?

Definitely! The Poseidon Temple is one of the most beautiful ancient sites in Greece. If you’re visiting Athens, it’s absolutely  worth making a trip down to Sounion to see the temple up close, and enjoy the fantastic sea views.

How do you get to the Temple of Poseidon?

There are three ways to get to the Temple of Poseidon in Sounion. You can take a KTEL bus, rent a car, or take a tour / private taxi.

Can you swim at the Temple of Poseidon?

The Temple of Poseidon is built up on a hill. If you have your own transportation, there are many beaches nearby where you can go for a swim. 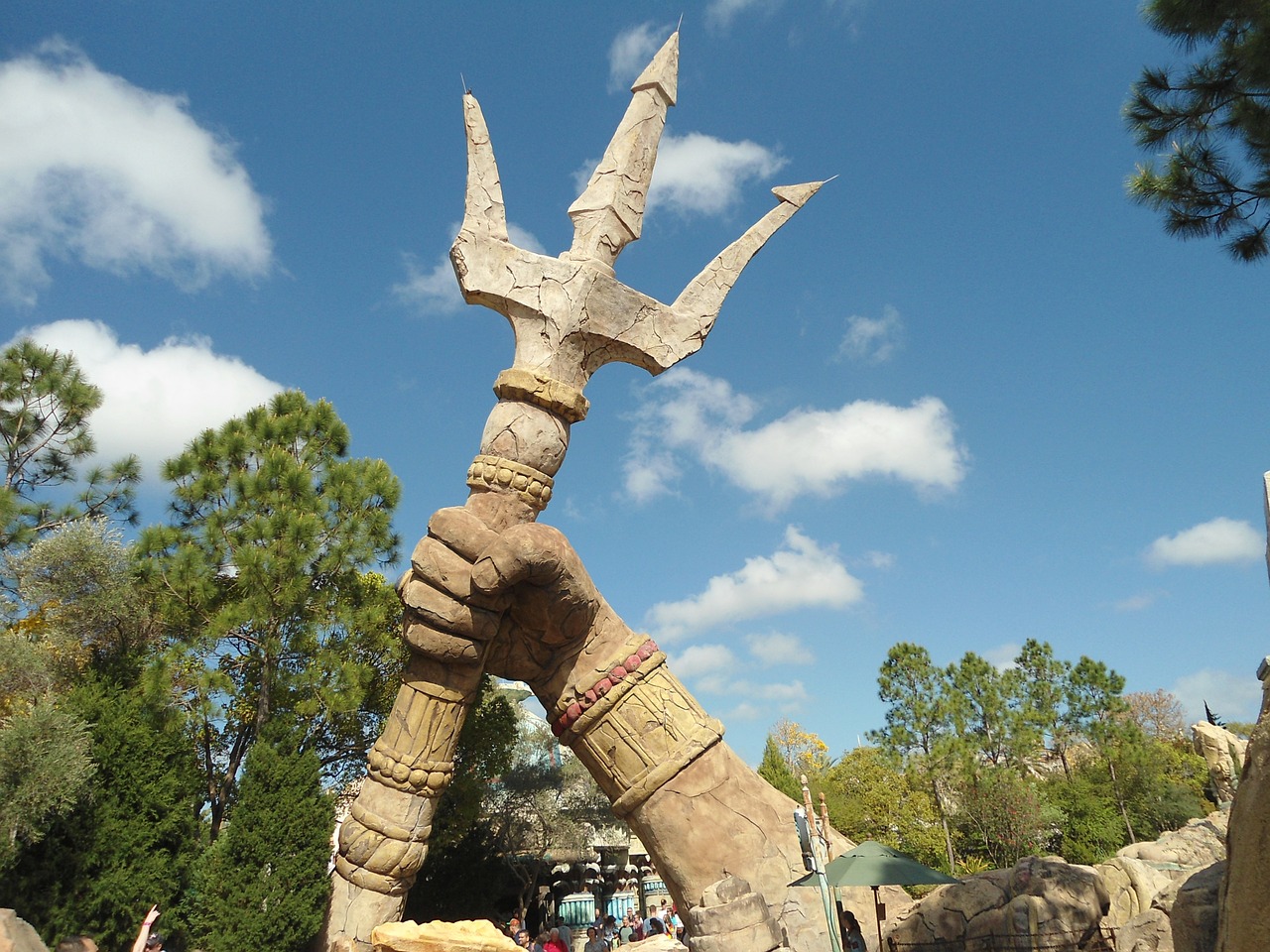 If you enjoyed this article, have a look at these other ones: 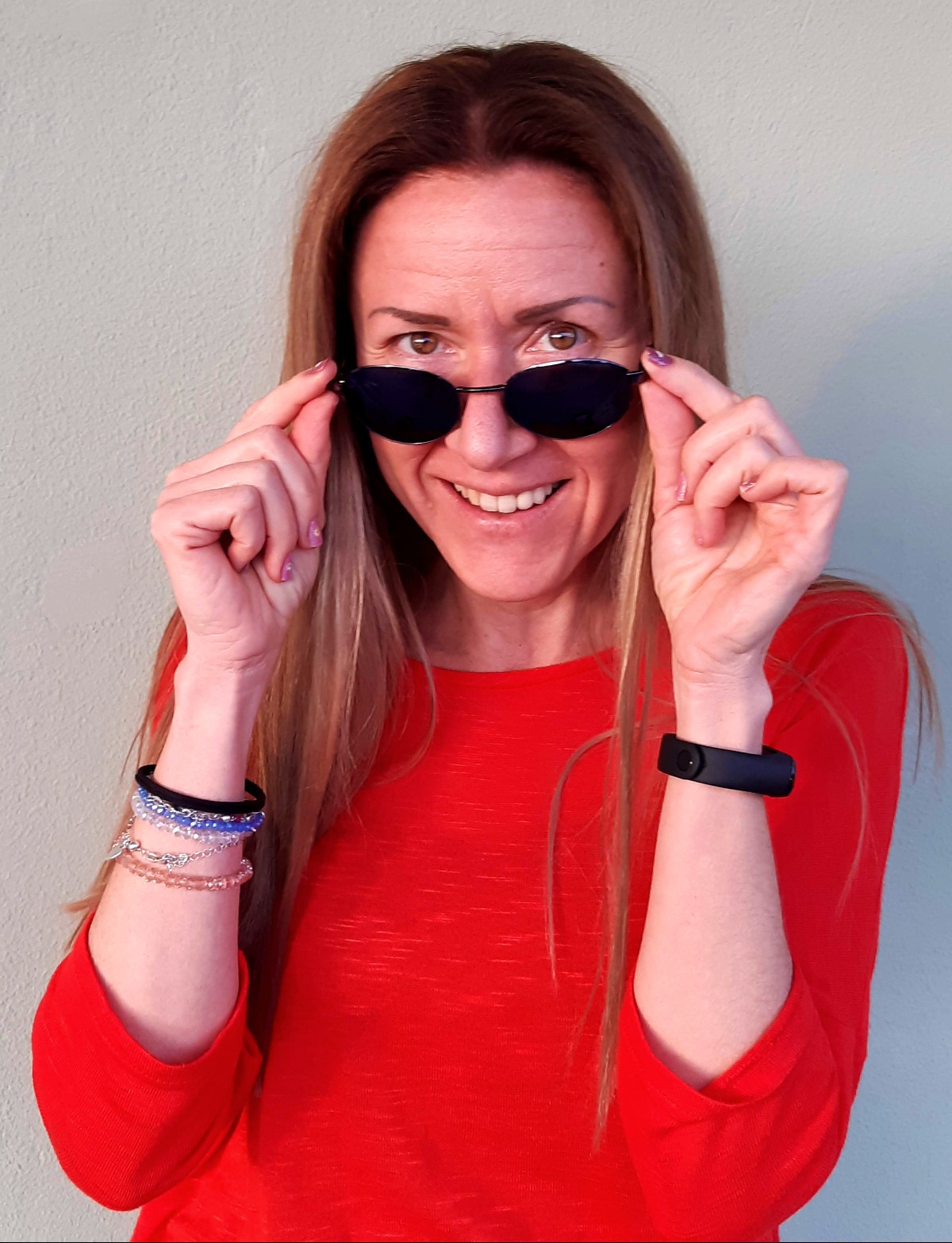 Hi! I’m Vanessa from Athens. The ancient site at Cape Sounion is one of my favourites in Greece, not just because of the temple, but also because of the incredible views. If you have a few days in Athens, make sure to visit. Follow my FB page for more Greece-related info!