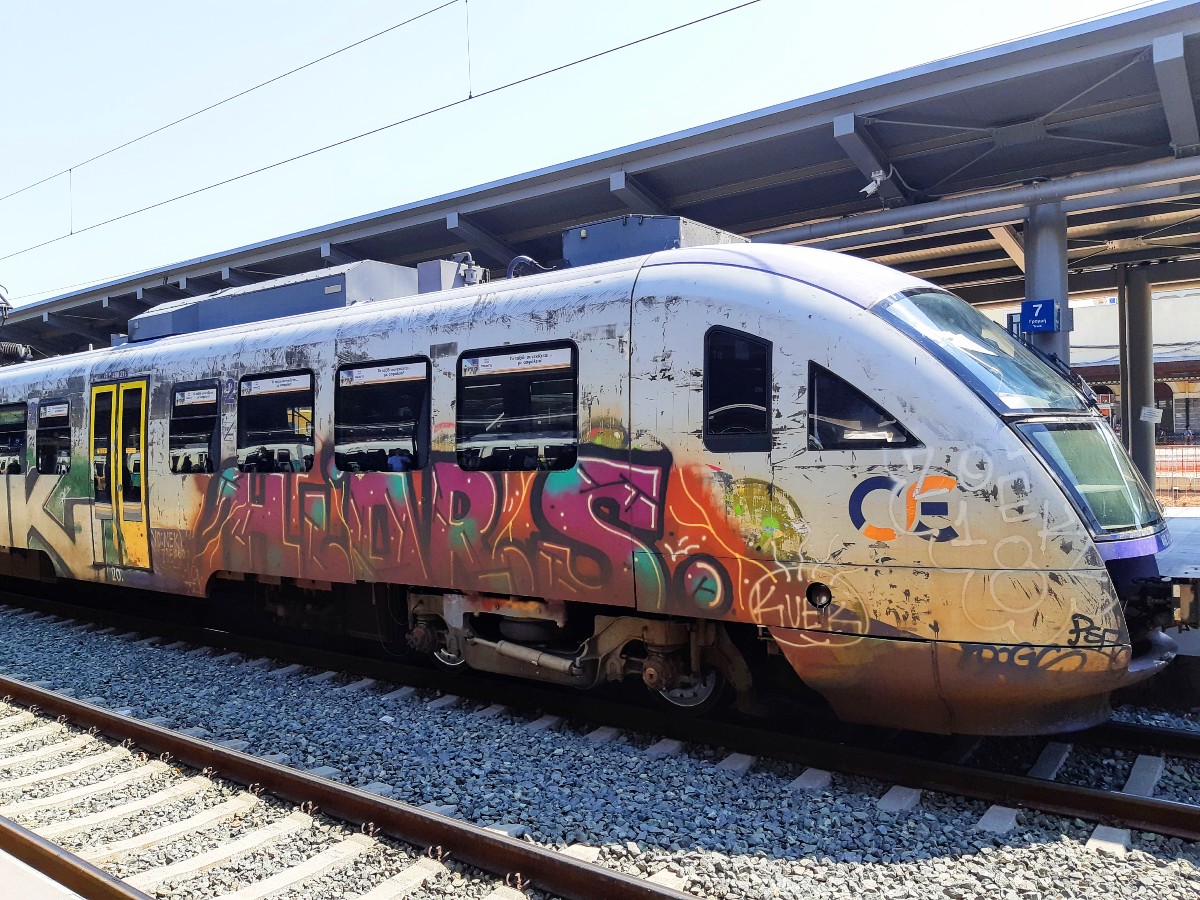 The train is one of the best ways to get from Athens to Thessaloniki. Here is all you need to know if you want to travel by train in Greece, including how to book your tickets and how to get to the train stations.

Train from Athens to Thessaloniki

The train is a pleasant, efficient and affordable way to travel around mainland Greece. It connects cities like Athens, Larisa, Thessaloniki and Kalambaka, near the famous Meteora monasteries. 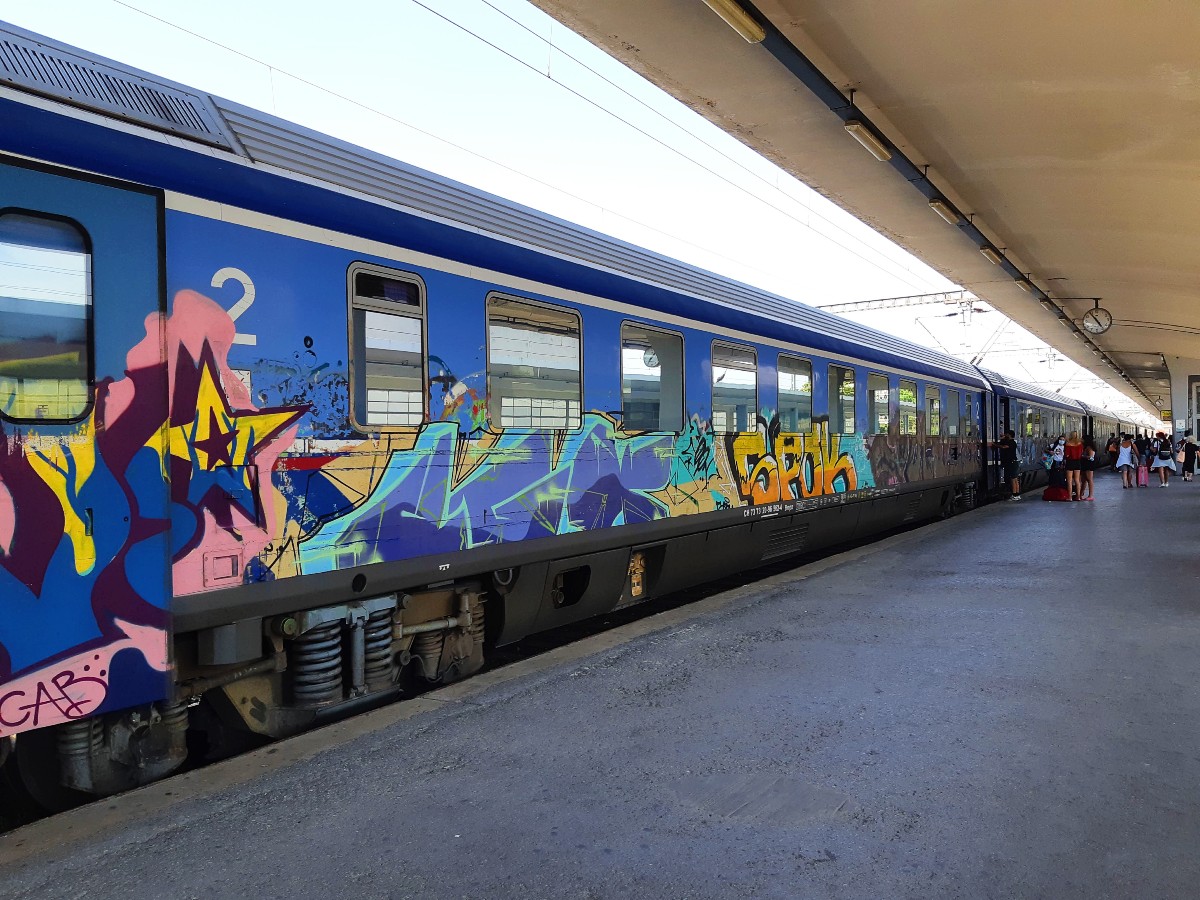 The train company, HELLENIC TRAIN (formerly known as TRAINOSE), has been around for several decades. They haven’t always had a great reputation, as the trains were often delayed. Another reason was their frequent strikes, especially in the past.

These days, things are much better. The train lines have had major refurbishments, which guarantee a smooth trip. If you last travelled in Greece by train over a decade ago, you will be impressed with the changes.

So let’s see how you can travel from Athens to Thessaloniki on the train, step by step.

How to book your train tickets online 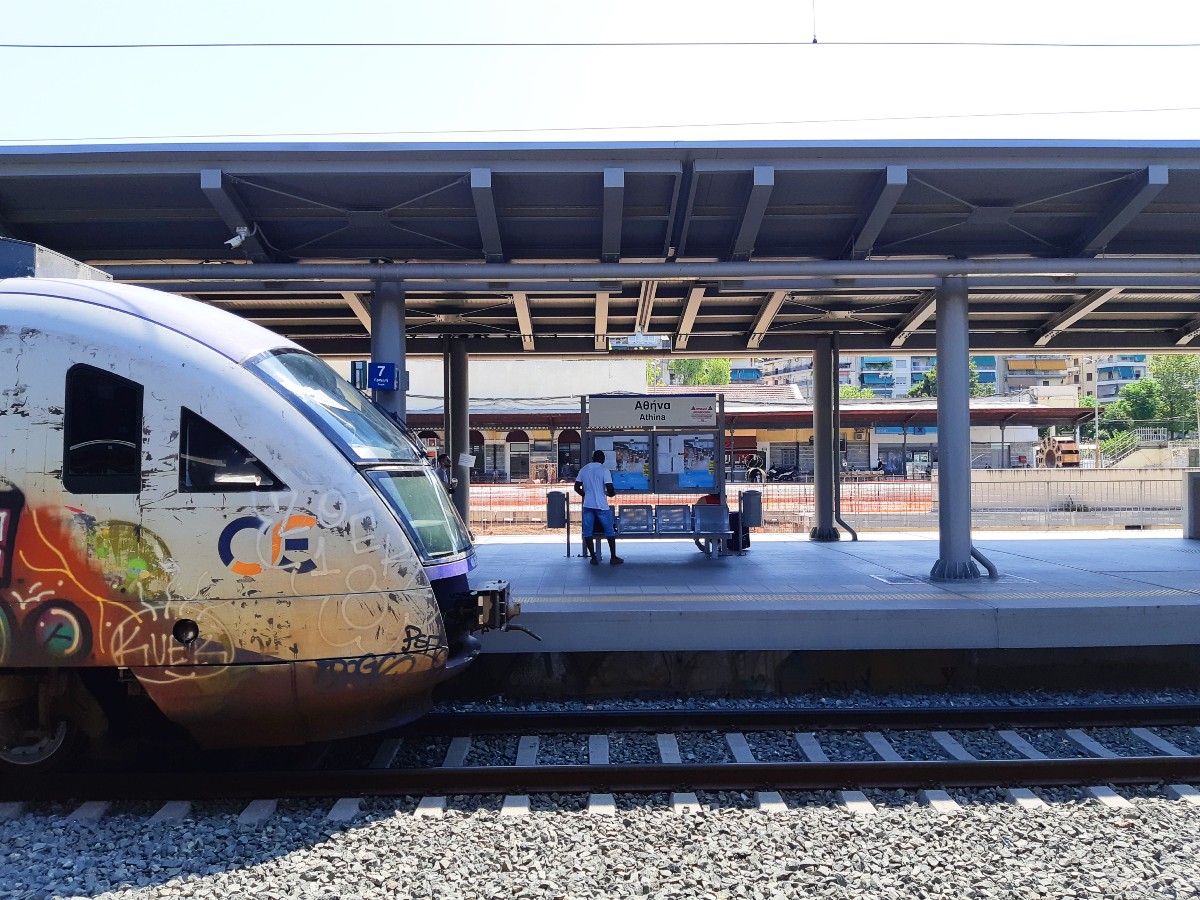 You can pay by debit / credit card or Paypal. The tickets will come to your email as a PDF, and will open automatically in the app. All you need to do is show the inspector the QR code, which they will scan.

If you prefer, you can also get paper tickets at the train stations. Allow for at least 45 minutes before the train departs, as there may be queues.

Also, though last-minute tickets might be normally available, don’t expect to always find seats on popular routes, especially on Friday and Sunday evenings.

This article offers more information about how to book your train tickets in Greece, including how to get the best prices.

As of 2022, there are two types of services connecting Athens and Thessaloniki: ICE, which runs twice a day, and IC. There are two seat classes on the trains: A and B. Class A is slightly more comfortable, but costs more.

If you choose the IC service, a one-way class B ticket from Athens to Thessaloniki (or vice versa) costs 43 euro. When you book a return ticket, you will get a 20% discount, so the Athens – Thessaloniki – Athens train ticket price will be 68.80 euro.

The ICE service is the so-called fast train Athens to Thessaloniki. These trains are newer, a few minutes faster, and slightly more expensive. 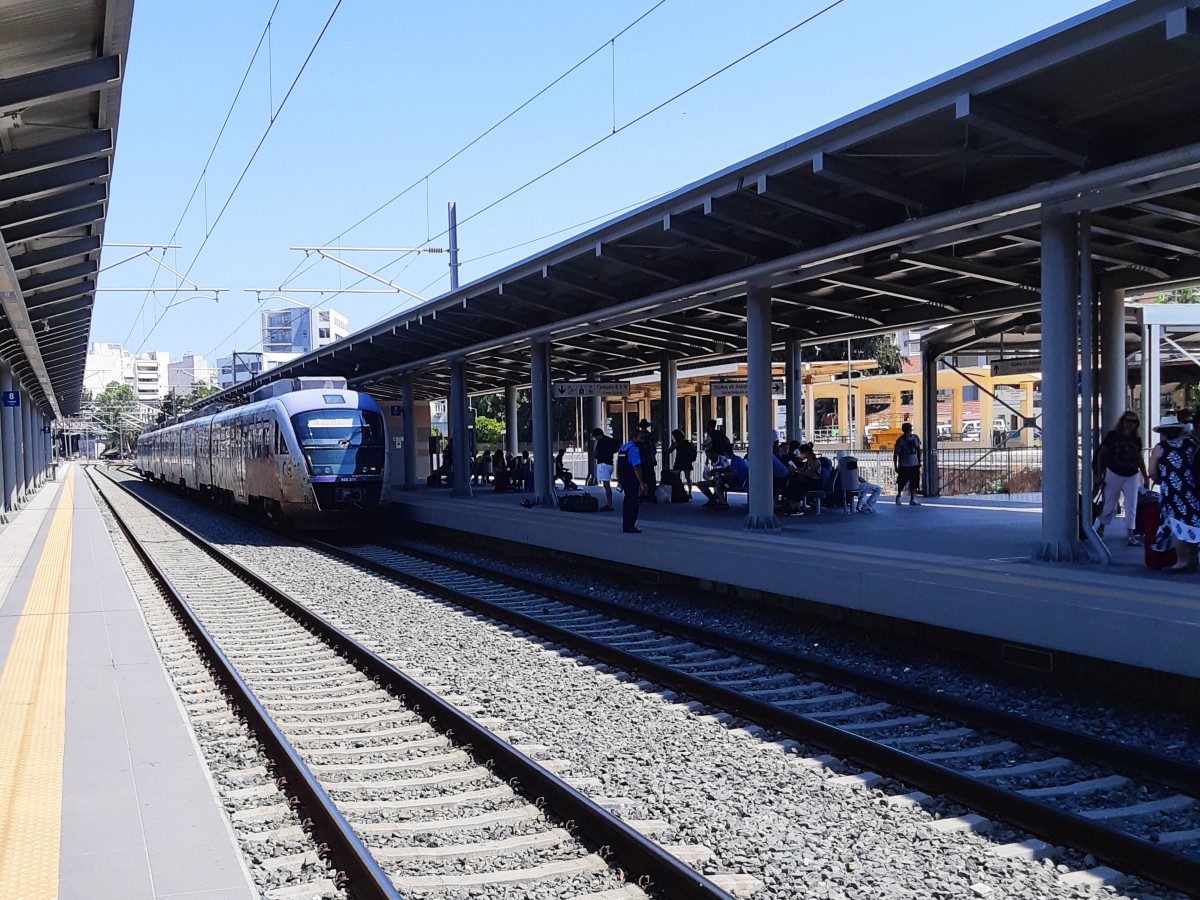 If you book your tickets a few weeks ahead of travelling, you will get a discount of a few euros. Using the app no longer gives you an extra 10% discount, like it used to in the past.

Children, students and people under 24 or over 65 years old are entitled to further discounts. Children under 4 years old travel for free. Check the website / app for the Athens train timetable and further information.

Where is the train station in Athens

The train station in Athens is right next to “Stathmos Larissis / Larissa station” metro station, on the red line. This is four stops from Syntagma metro station, in the Athens city center. 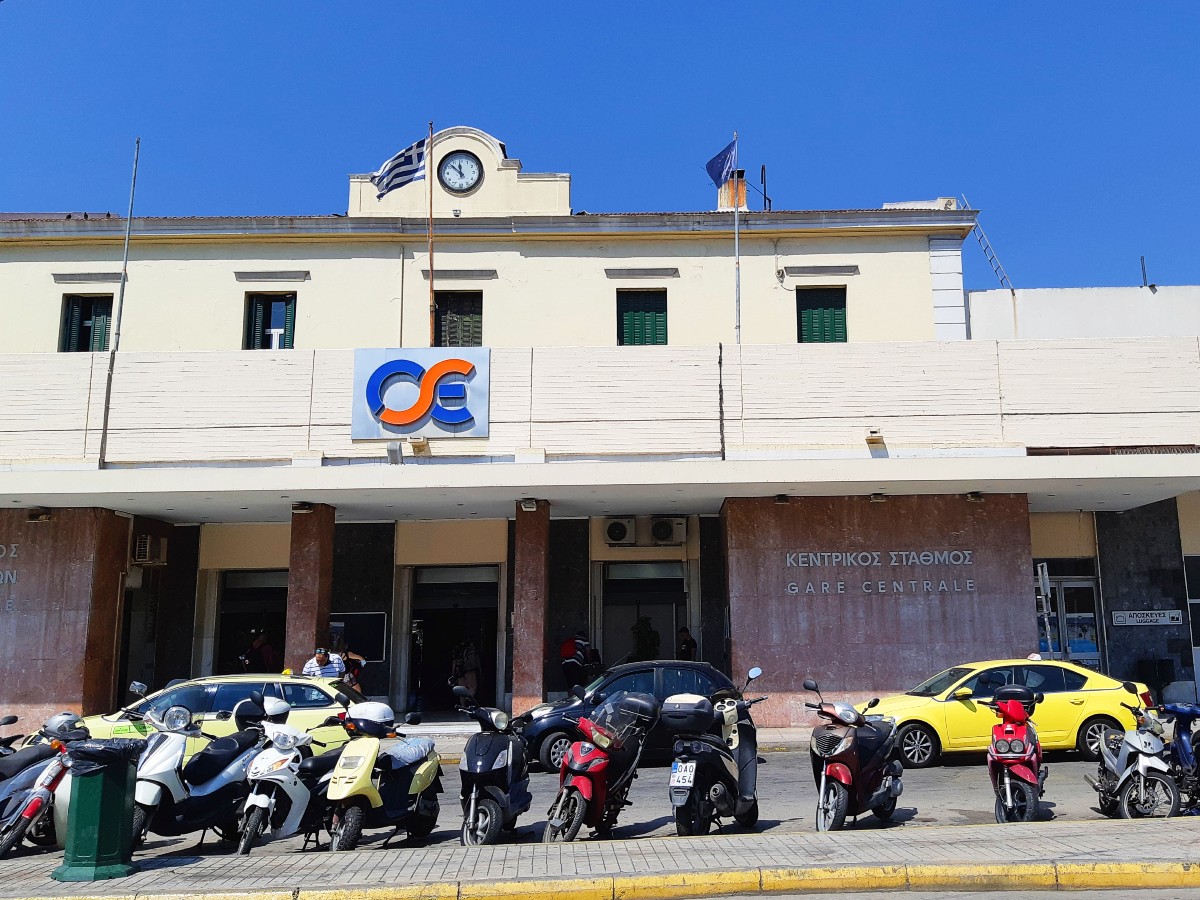 It is easy and quick to get to the train station in Athens on the Athens metro system. A one-way ticket only costs 1.20 euro.

If you have heavy luggage, note that the exit leading to the train station has no escalator or elevator. In order to avoid the staircase, you can take the elevator going up towards Diligianni exit, and then cross the street at the traffic light.

Alternatively, you can get a taxi which will drop you off right outside the railway station.

Which platform does the train to Thessaloniki depart from?

Unlike other train stations in Europe, the train station in Athens only has a handful of platforms. Still, it’s best to arrive at least 20 minutes before your train departs, so you can easily find where you need to be. 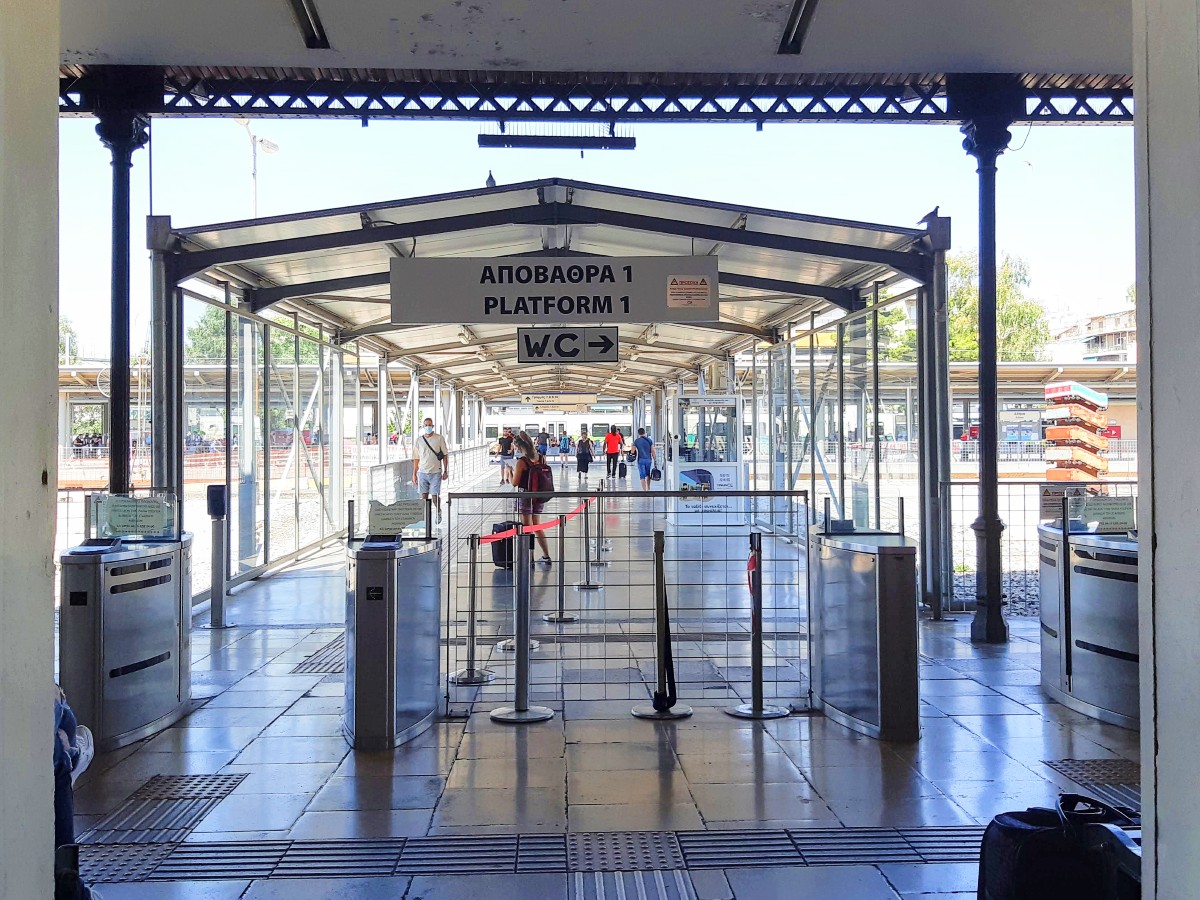 Note that there may not be any notice boards announcing where your train departs from. Doublecheck with a train employee and make sure which platform you need to go to. You might need to take some escalators down, then up.

Boarding the train in Greece

Generally speaking, the train may arrive only 10 minutes before it is scheduled to depart. This being Greece, people will rush to get on the train as quickly as possible. You will need to check what carriage your seat is in, and board the right one. 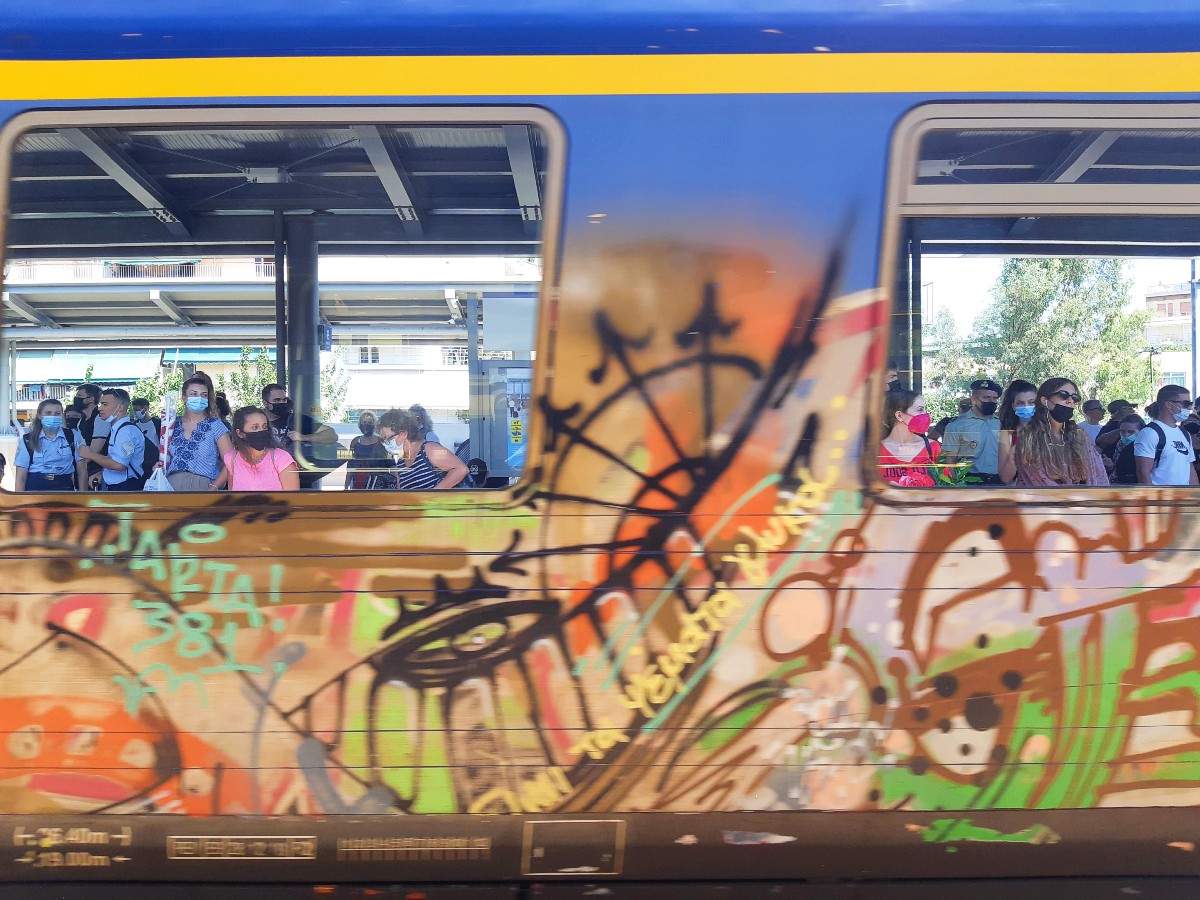 Now this is easier said than done. You will notice that there is a lot of graffiti on some of the trains, so quite often the carriage number is not immediately visible.

If you haven’t spotted any carriage numbers, you can try asking another passenger. 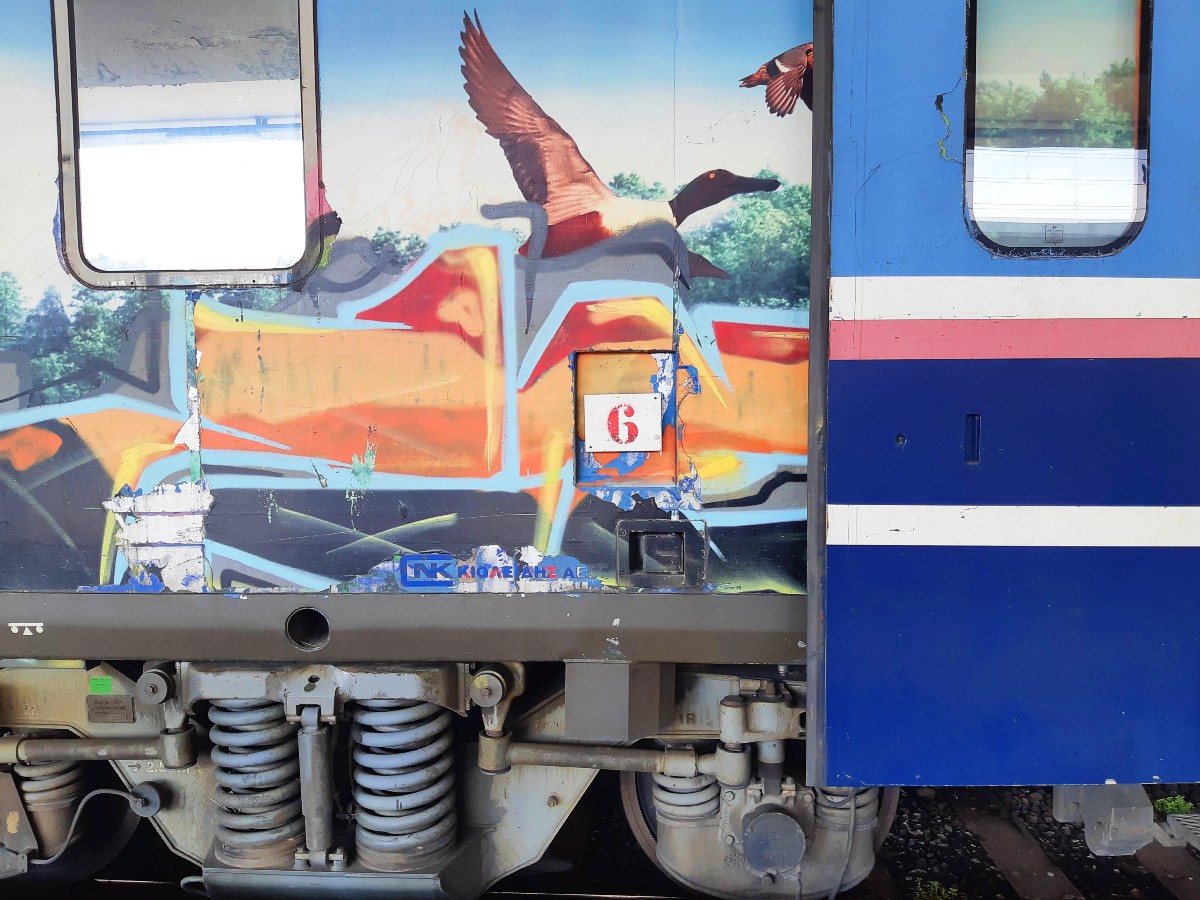 Once in your carriage, you can find your seat number and store your luggage. There are spacious overhead compartments above all seats, as well as extra areas close to the carriage doors that would fit larger suitcases. 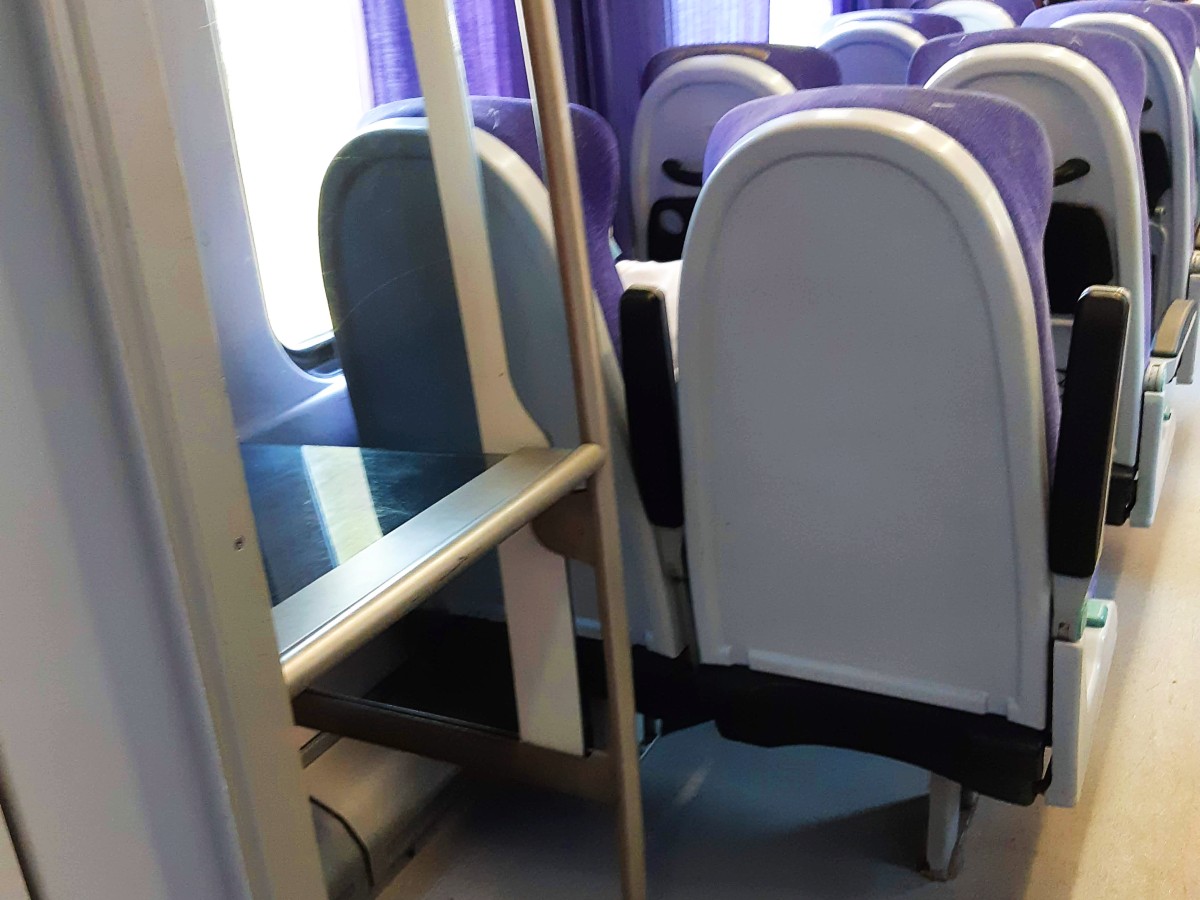 As always, keep your valuables close to you at all times.

I find the train super convenient to travel on. There are nice comfortable seats, plenty of leg space and a small table that is good enough to fit a small laptop or a book. This is a Class B seat on the IC train. 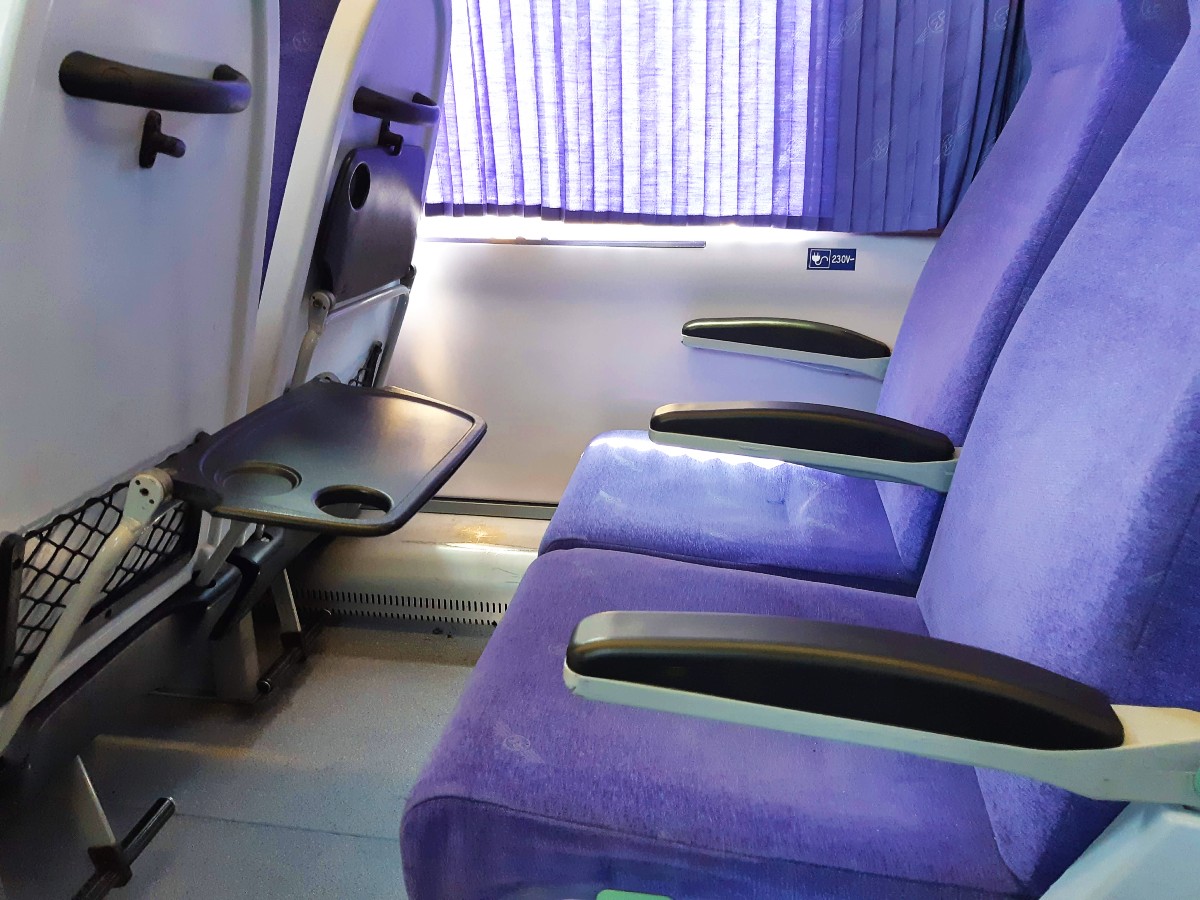 You will find two sockets next to each pair of seats, just under the curtains. You can easily charge your mobile phone, laptop, tablet or any other electronics.

I’ve mostly used the train in summer, and the air-condition runs at a perfect temperature (at least by my standards). So much better than the near-arctic temperatures in some of the Greek ferries!

Food and drink on the train

A selection of food and drink is available in a designated carriage on the train. You will find some snacks, water and other drinks, and a selection of warm dishes.

There are a few tables where you can sit, but you can also take your snacks or drinks back to your own seat. 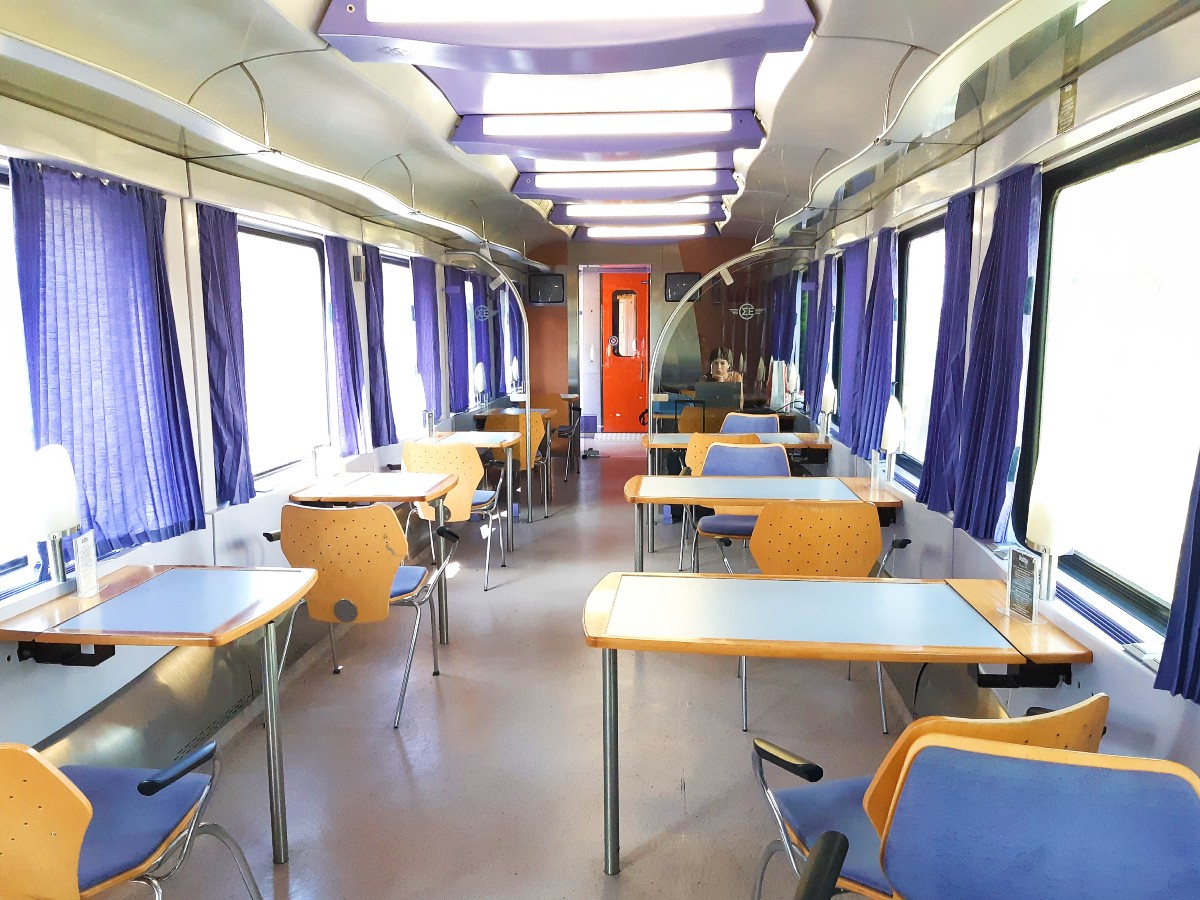 The canteen is usually around the middle of each train. If your carriage is at the one end, you will have to walk through two or three carriages to get to the canteen. Alternatively, you can wait for a little canteen trolley to pass by your seat, at some point during the journey.

If you prefer not to use the canteen, you can travel with your own food and drink. There are also several options for snacks at both Athens and Thessaloniki train stations.

Toilets on the train

Alright, this is where I’m not super impressed. While the rest of the train is fairly modern, the toilets are rather underwhelming, to put it mildly. I believe these are the exact same toilets they had back in the 80s! 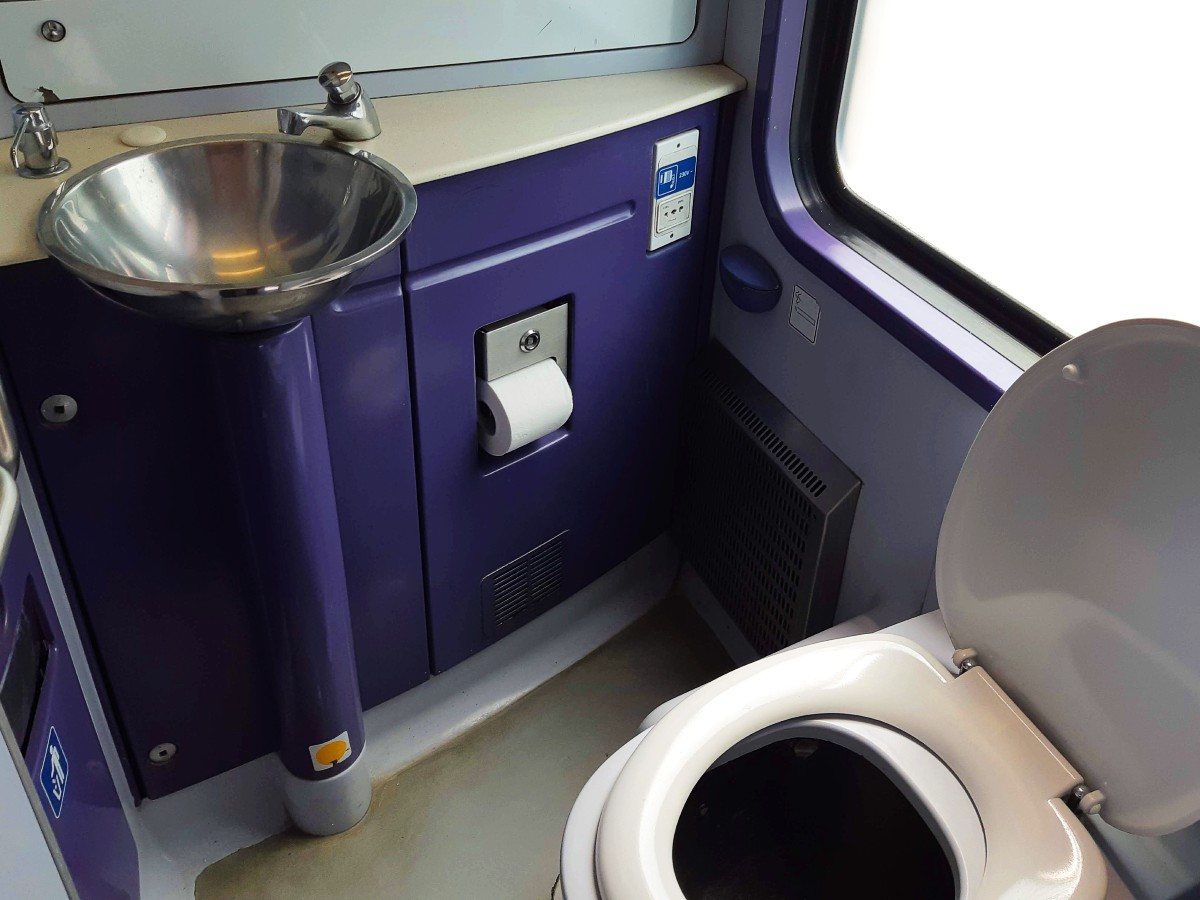 In any case they are usually clean, at least in my experience, and they do the job. I would suggest you carry your own toilet paper, as it might run out and not be replaced.

What can I do on the train

This is a question that many travellers ask, which I find rather surprising! Travel time from Athens to Thessaloniki is just over 4 hours, and a little shorter for ICE services. 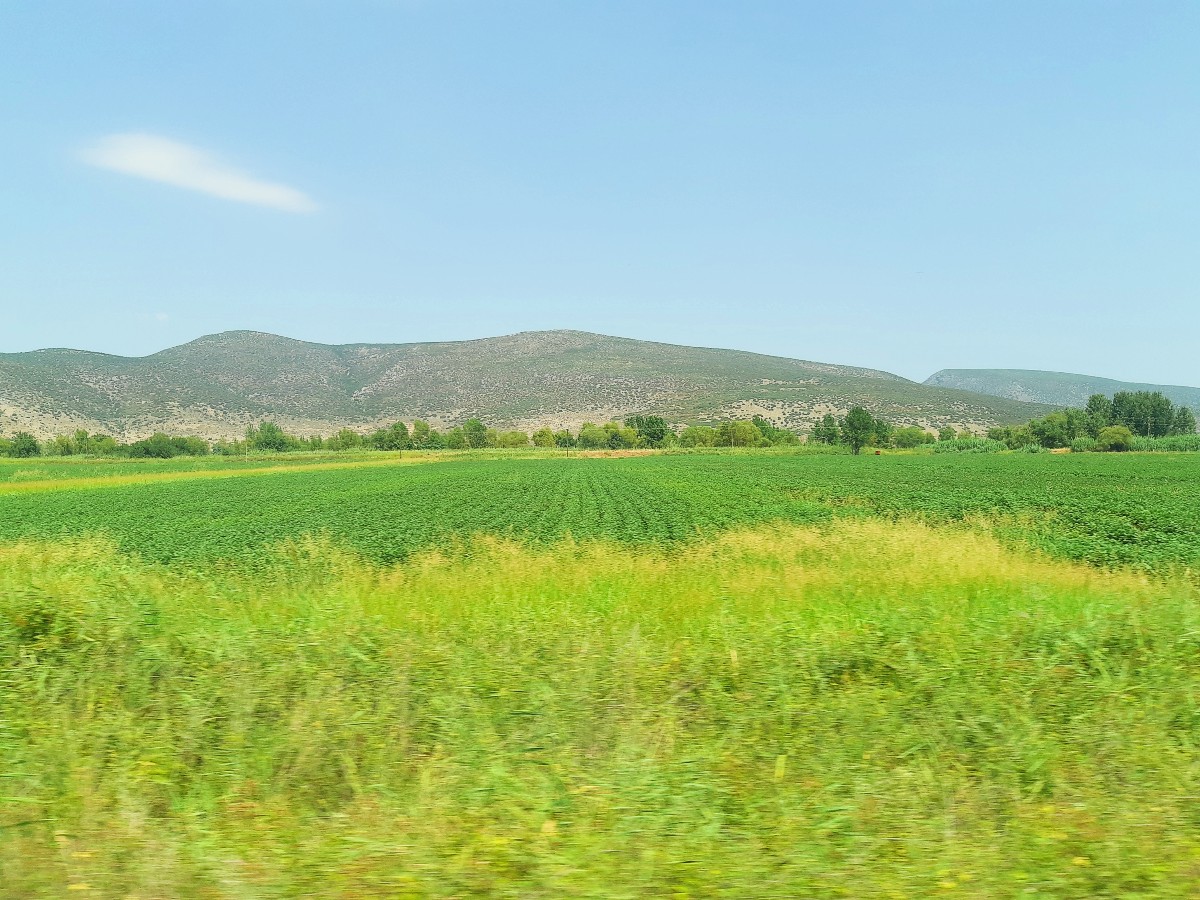 You can bring a book, watch a movie on your laptop, snooze, look out of the window, or just talk to your fellow passengers.

In addition, you can just do some last-minute research on things to do in Thessaloniki. Don’t rely too much on the internet though, as reception is quite bad for much of the route.

Where is the train station in Thessaloniki

The train station in Thessaloniki is towards the edge of downtown Thessaloniki, on Monastiriou street. It is 2.2 kms from Aristotelous Square, and 3.5 kms from Thessaloniki’s symbol, the White Tower.

Depending on where you are staying in Thessaloniki, you might even be able to walk to your hotel room after your arrival. Most people would take a taxi. 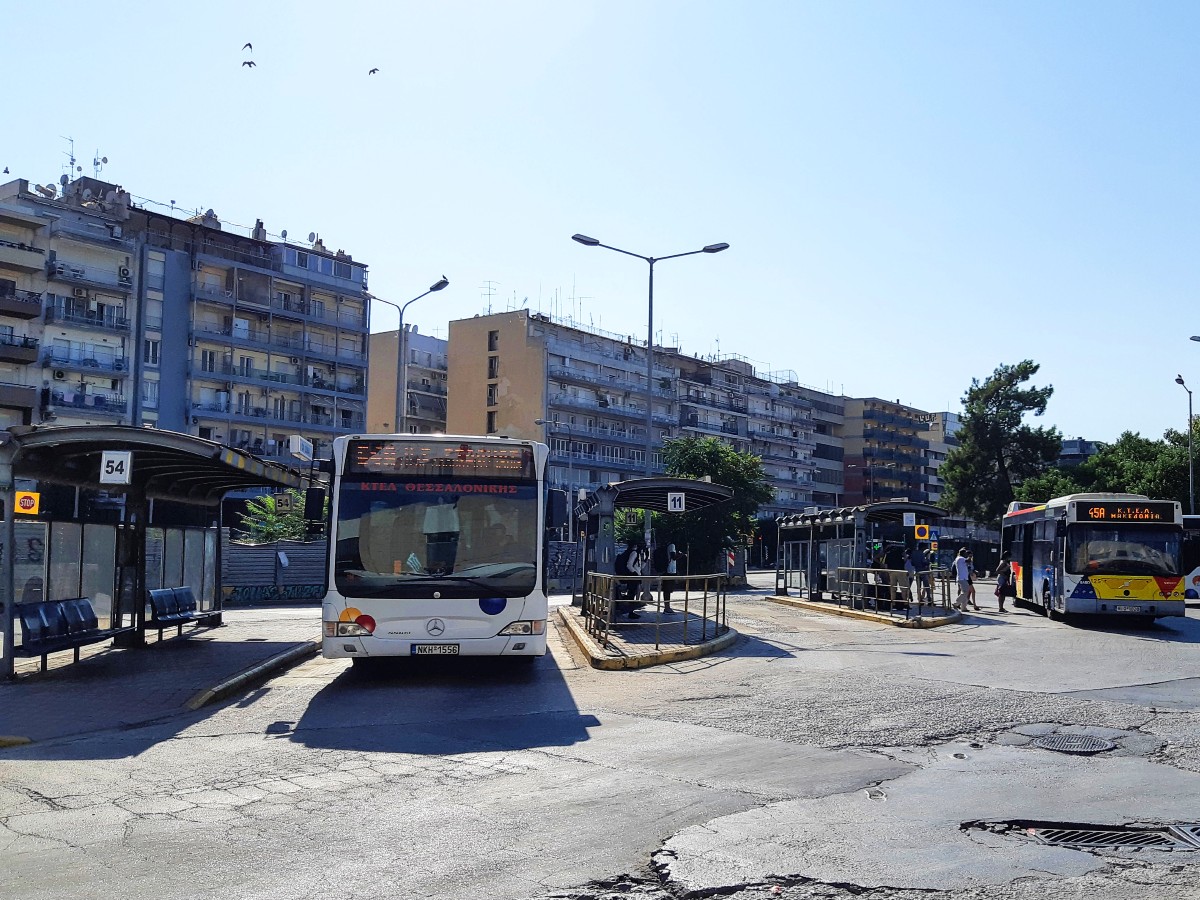 It’s also possible to hop on or one of the numerous urban buses leaving from the station. You can buy your bus ticket from the vending machine inside the bus.

Here are a few more answers to questions regarding travel from Athens to Thessaloniki:

How do I reach Thessaloniki from Athens?

There are many ways to reach Thessaloniki from Athens. You can travel by plane, train, bus, car, or private transfer.

What is the fastest way to get from Athens to Thessaloniki?

Ignoring the pre-boarding time, the fastest way to travel from Athens to Thessaloniki is by a short domestic flight which takes a little under an hour. By comparison, travelling by train takes around 4 hours.

How much is the train from Athens to Thessaloniki?

At the time of writing, a one-way train ticket from Athens to Thessaloniki starts at 43 euro, while a return ticket starts from 66.80 euro. Several discounts apply, so check if you qualify for any of them.

What is the cheapest way to get from Athens to Thessaloniki?

The cheapest way to get from Athens to Thessaloniki is the bus. At time of writing, it costs 36 euro one way / 57 euro return. Before you book, check out flight prices, as sometimes they may be similar to the bus fares.

What is the best way to get from Athens to Thessaloniki?

This is up to you. If time is important, the plane will save you a couple of hours. I personally vote for the train, as it’s more relaxed and you can see a bit of Greece while you travel.

How far is Athens from Thessaloniki?

Thessaloniki is 500 kms from Athens. Travel time if you are driving is around 5 hours, or longer if you stop on the way.

What is the Hellenic train schedule from Athens to Thessaloniki like?

There are seven daily trains from Athens to Thessaloniki. The first one departs at 7.08, and there is one every about 2 hours until 19.01.

Taking the train from Athens to Thessaloniki

I hope this article has been helpful! If you have any more questions regarding the trains in Greece, please leave a comment below and I’ll get back to you.

Here’s a guide with the best day trips from Thessaloniki.

Here are a few guides for Athens:

As for Thessaloniki, here are all the reasons why Thessaloniki is worth visiting. Plus, here’s an excellent food tour that I warmly recommend!

Hi! I’m Vanessa from Athens. I have been using the trains in Greece since the 80s, and I’ve always found them fascinating. I have some old memories of the Athina Thessaloniki train trip taking a good 12 (!) hours due to delays. I also remember travelling in the same carriage with a baby goat, though I now wonder if I’m just making this up 😊 Follow my FB page and FB group for more tips on Greek travel!