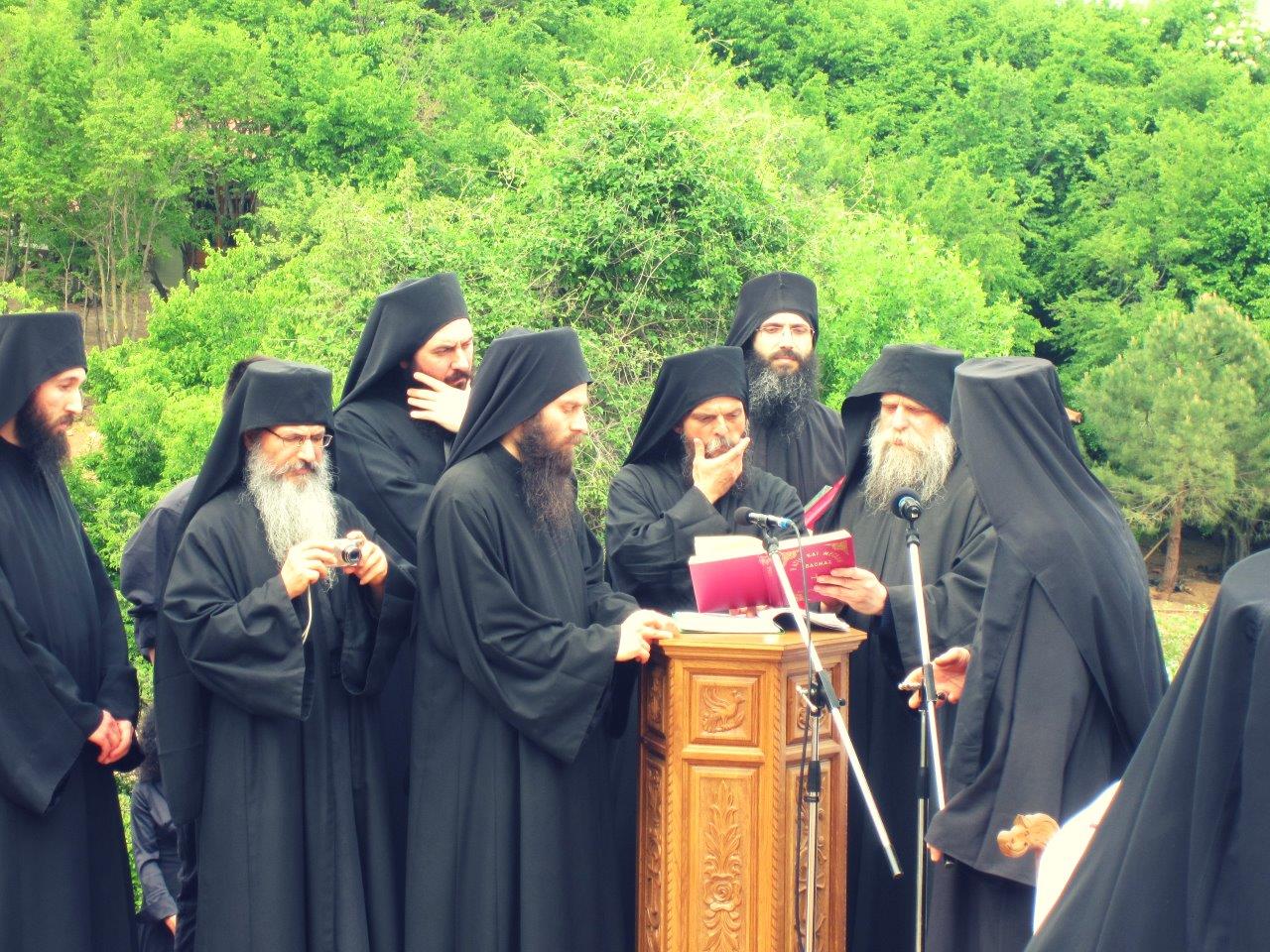 Religion in Greece is quite important, in comparison to most other European countries. It is tied to every aspect of the culture. Read on to find out more about what it means to be a Greek Orthodox Christian.

The importance of religion in Greece

In comparison to most other European countries, religion is quite important in Greece. It is tied to every aspect of the culture, and the percentage of self-identified religious people is among the highest in Europe.

The official religion in Greece is Eastern Orthodoxy, known also as Greek Orthodoxy. Reference to the Greek Orthodox religion on national Greek ID cards was mandatory until 2001. 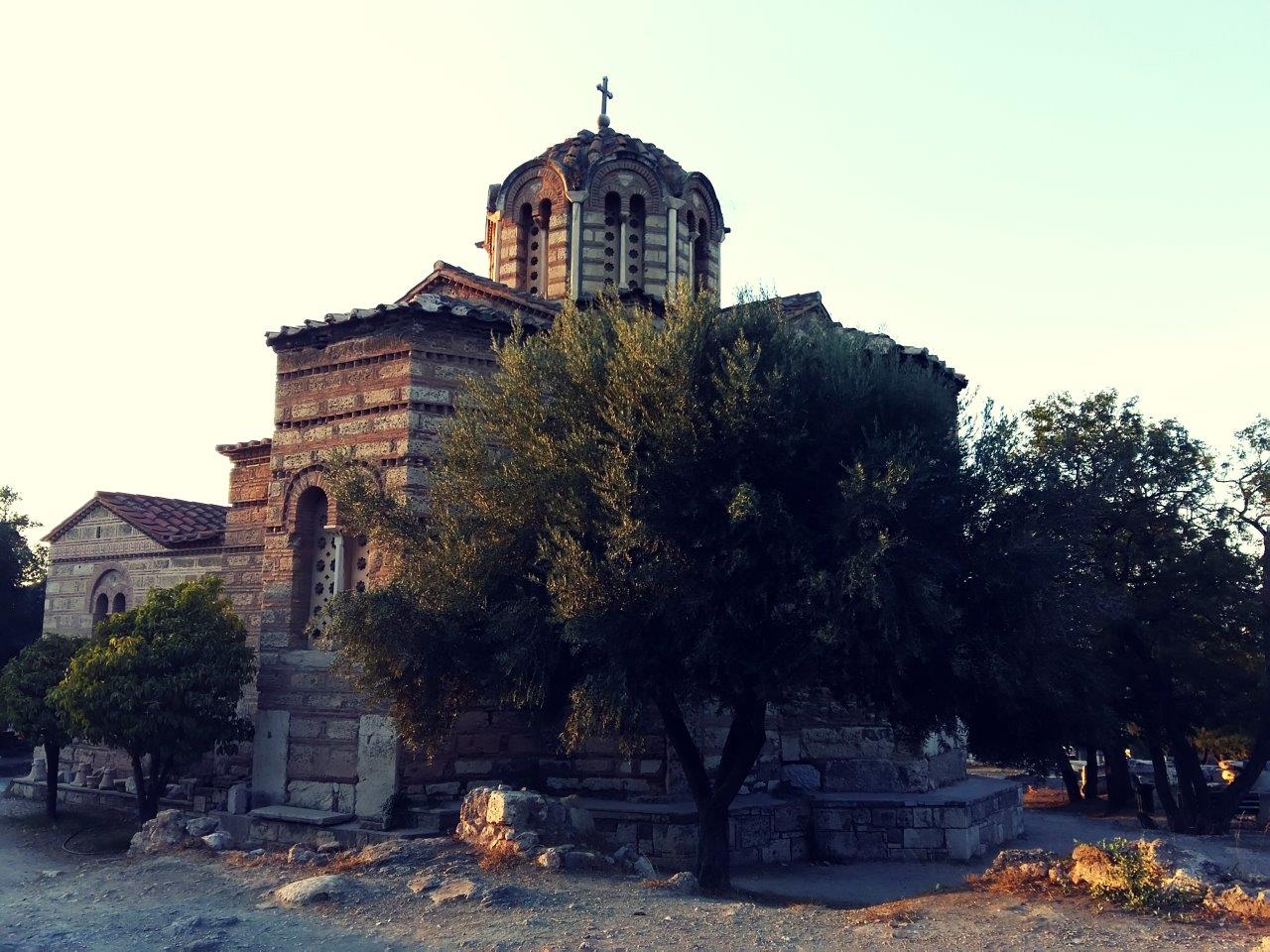 Religion in Greece – Churches around Greece

If you are driving around Greece, the number of churches that seem to be everywhere will surprise you. Wherever you are, chances are that if you look around you will be able to see at least one church.

Given our long and varied history, many of those churches are over 500 years old, not to mention the Ancient Greek temples that exist in several parts of Greece.

The church of Agia Fotini near Tripoli, uniquely combines several elements in one church! 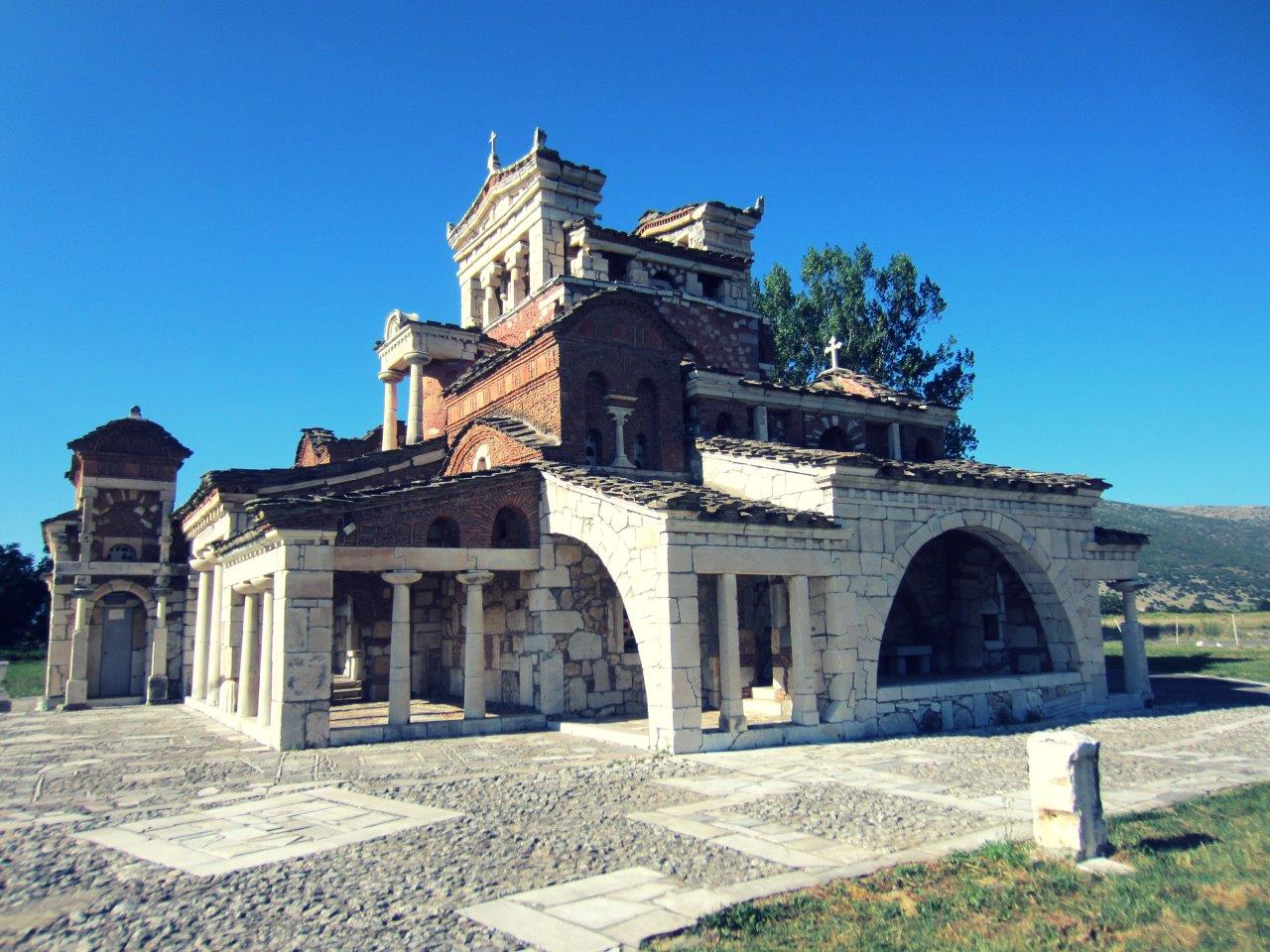 Apart from the official churches and chapels, you will also notice several tiny churches on the roadside, all around the country.

Unfortunately, many of those little shrines were built in the memory of someone who died at a car accident. Sometimes, however, they were built by those who survived an accident, thanking the saint who protected them.

Religion in Greece – How are names chosen?

During the ceremony, the baby is immersed in a large tub of water. Babies are typically 6-12 months old when they are baptised.

As you can imagine this ceremony is not all that pleasant for the baby – there is normally a lot of crying going on! 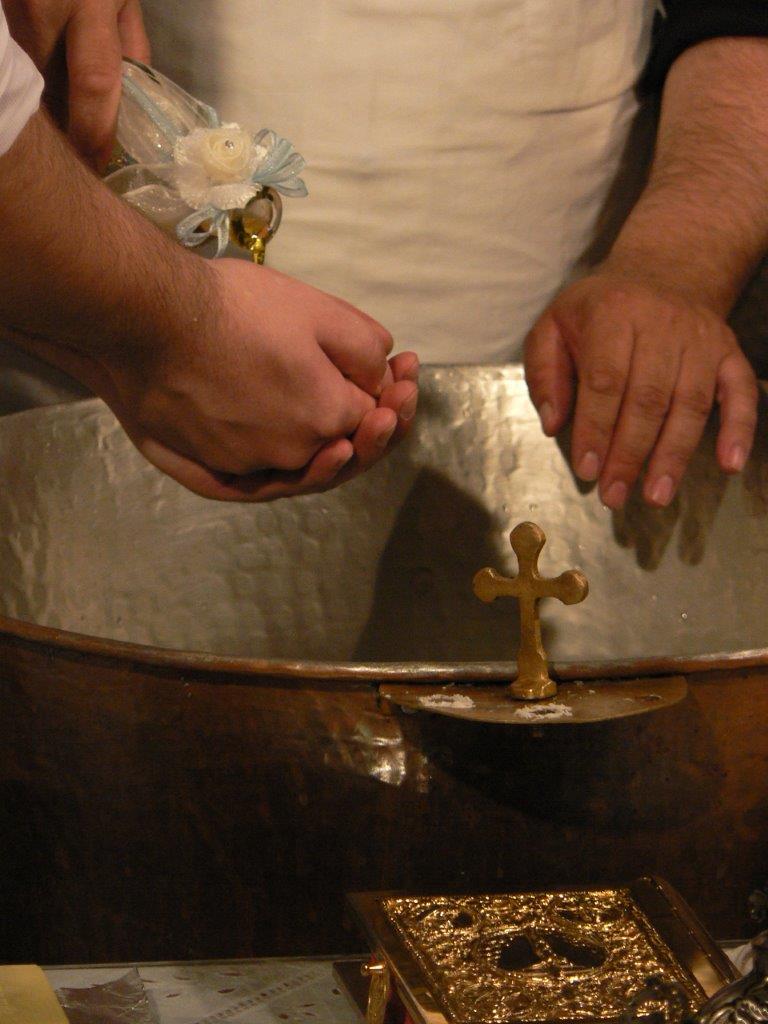 Quite often, people choose to shorten their names – so for example, Konstantinos can be called Kostas, and Panagiota can be shortened to Penny. My parents shortened my own name, Vassiliki, to Vanessa. (Apparently, I owe this to Vanessa Redgrave, who was popular at the time I was born).

These days, many couples choose to give their children a name they like rather than name them after their grandparent. Nevertheless, baptisms in church still take place for most children.

Most Greek people have a nameday. A nameday is the day when the Orthodox Saint who we were named after celebrates. Traditionally, a nameday used to be more important than a birthday. 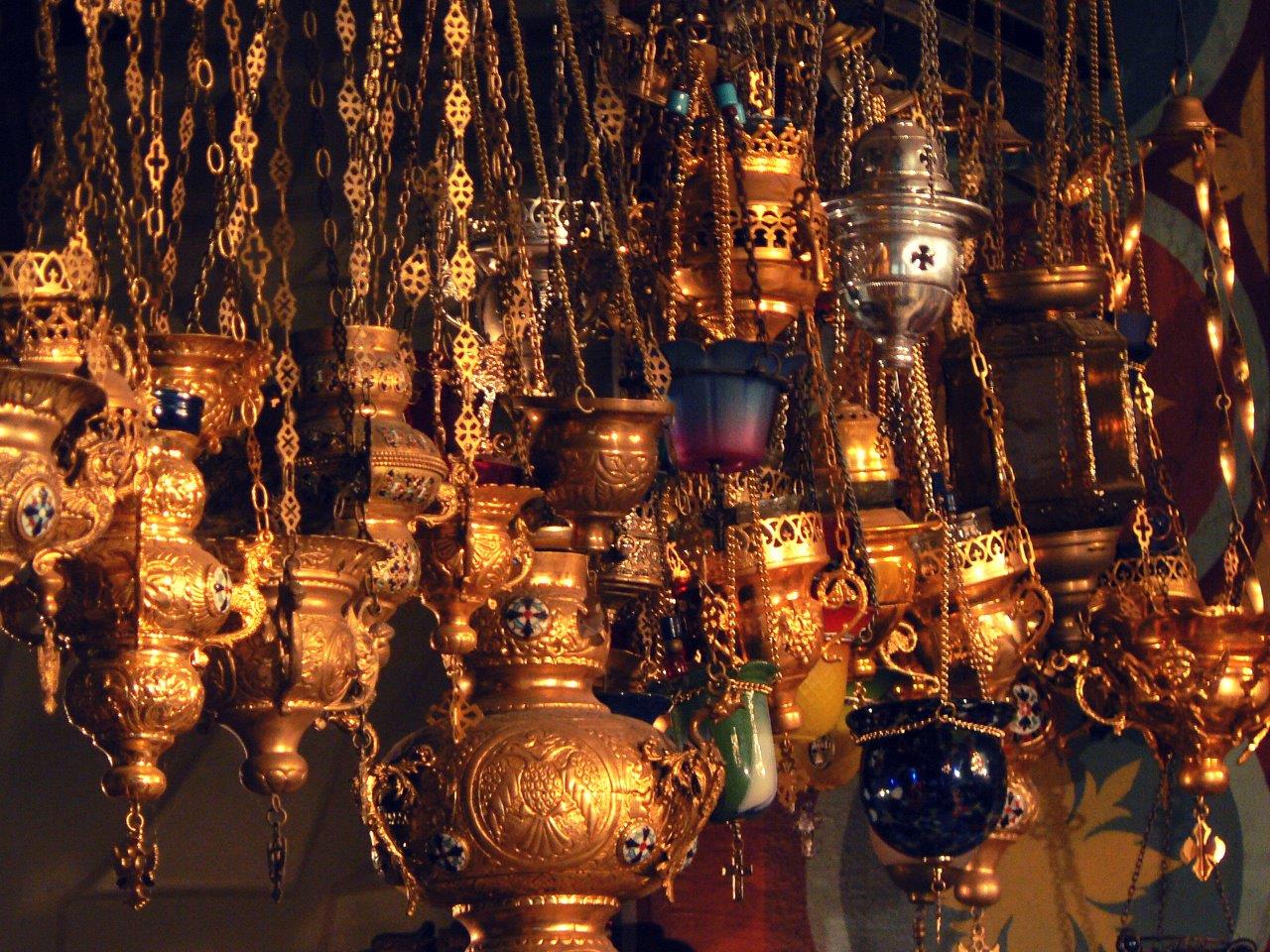 Some of the most important Greek namedays are the following:

Traditionally, people received friends and relatives at home on their nameday. No invitation was needed, and it was just assumed that people would drop by. This is becoming less common these days.

For most religions, fasting is a custom related to cleansing, and there are several fasting periods throughout a year.

The Greek Orthodox church follows a rather strict fasting regime. It consists of a specific diet on about 180 days in total throughout the year. The longest streak begins on Clean Monday and continues throughout the whole of Lent.

The fasting calls for an almost vegan diet, where confusingly seafood (but not fish) is also allowed. The fasting regime also includes abstinence from “anything pleasurable”, which makes one wonder how religious Greeks make babies. 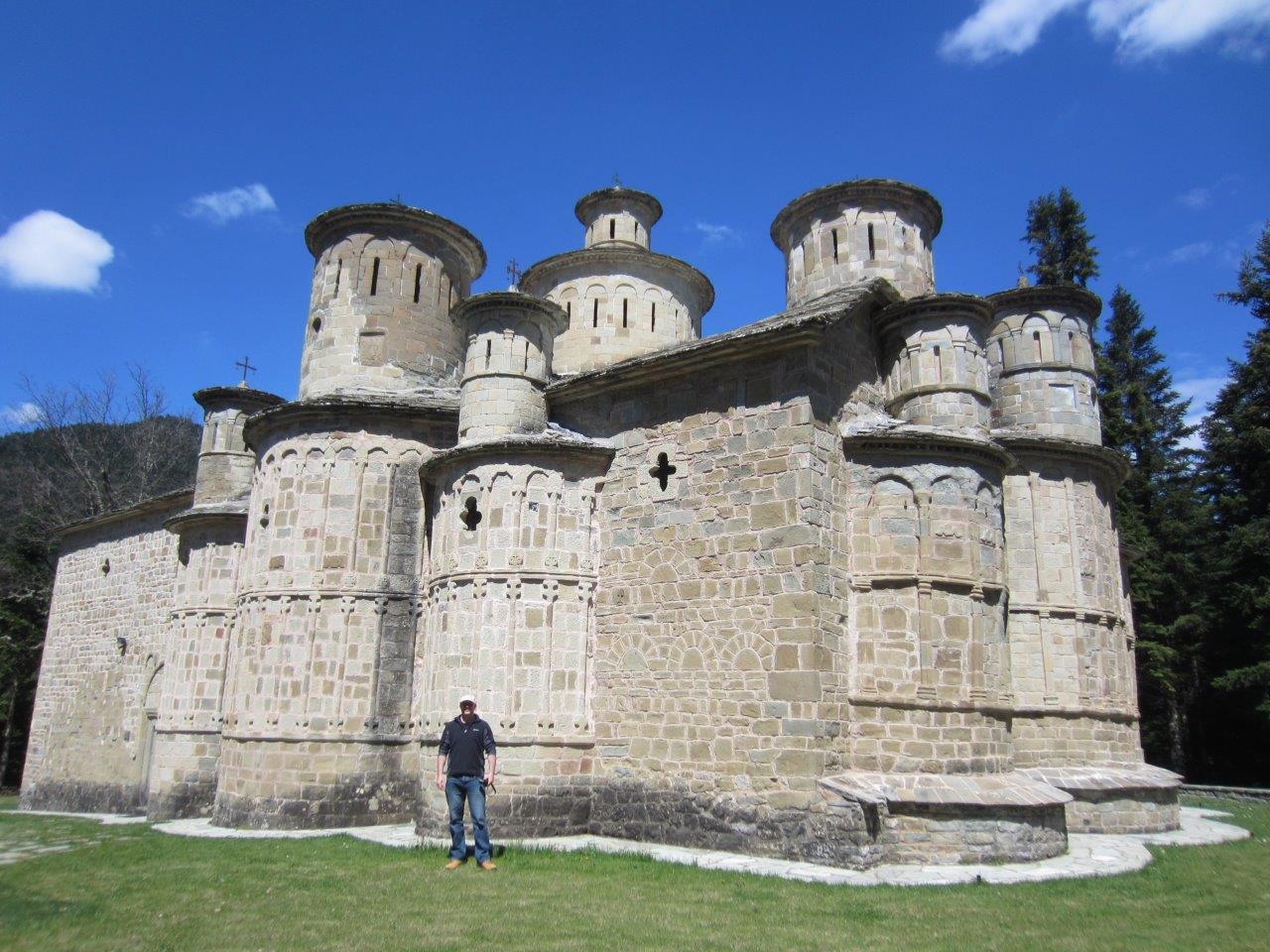 The longest periods of fasting are the weeks before Easter, before Christmas and before the Dormition of Virgin Mary on 15th August. Also, Wednesdays and Fridays are days of fasting.

A few foods like olive oil and wine have their own special place in the fasting regime, so they are not allowed on all fasting days.

Confused? You are not alone. However, there are several people in Greece who follow a strict fast throughout the whole year!

In most countries where Christianity is a major religion, Christmas is the most important religious holiday. In Greece, however, Easter is a lot bigger than Christmas.

On the week before Easter, fasting becomes extra strict, and there is a daily ceremony in churches all around the country.

One of the highlights of those ceremonies is the Perifora tou Epitaphiou, on the evening of Good Friday. This consists of a flower-adorned cubicle, the Epitaphios, representing the grave of Jesus Christ. The Epitaphios is carried around the church and the neighbourhood, and people follow in a procession. 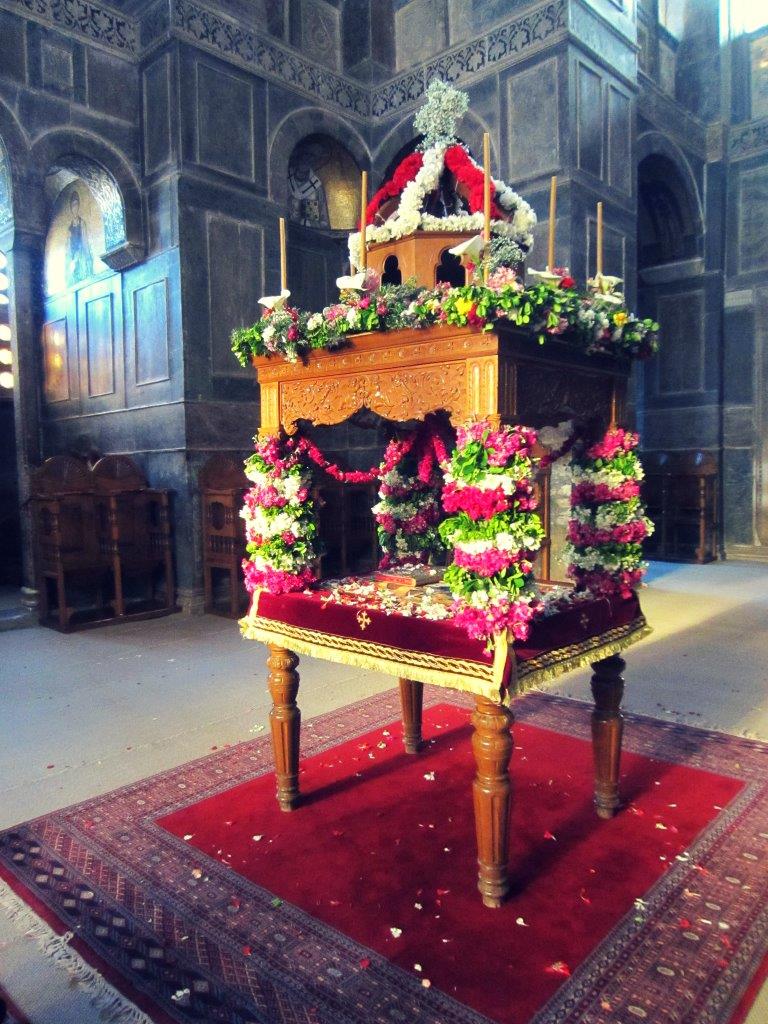 Unlike Christmas, Greek Easter is not really commercialized. There is no tree to decorate, no stocking fillers, no socks over the fireplace.

The only things bought for the Easter ceremony are candles, to be lit up in the church on Holy Saturday. These are traditionally bought by a person’s godfather or godmother.

Greek Easter traditions include LOTS of food. Tiropita, spanakopita, and various types of salads. Local meat delicacies with weird names, such as kokoretsi and gardoumpa. A tasty, hearty meat soup called magiritsa, made out of animal parts that are not even allowed in some countries. Red hard-boiled eggs, which are meant to be crushed into each other. 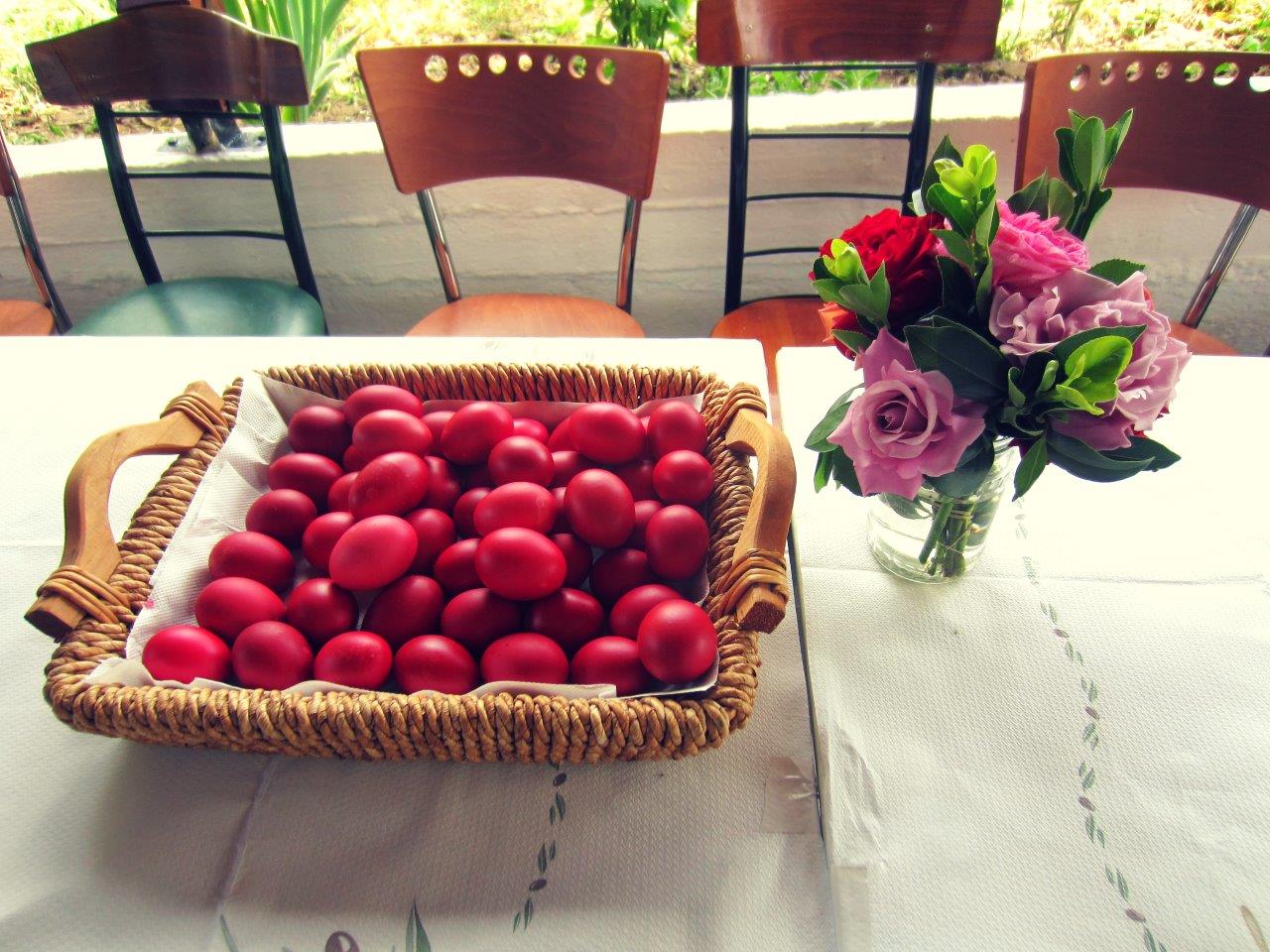 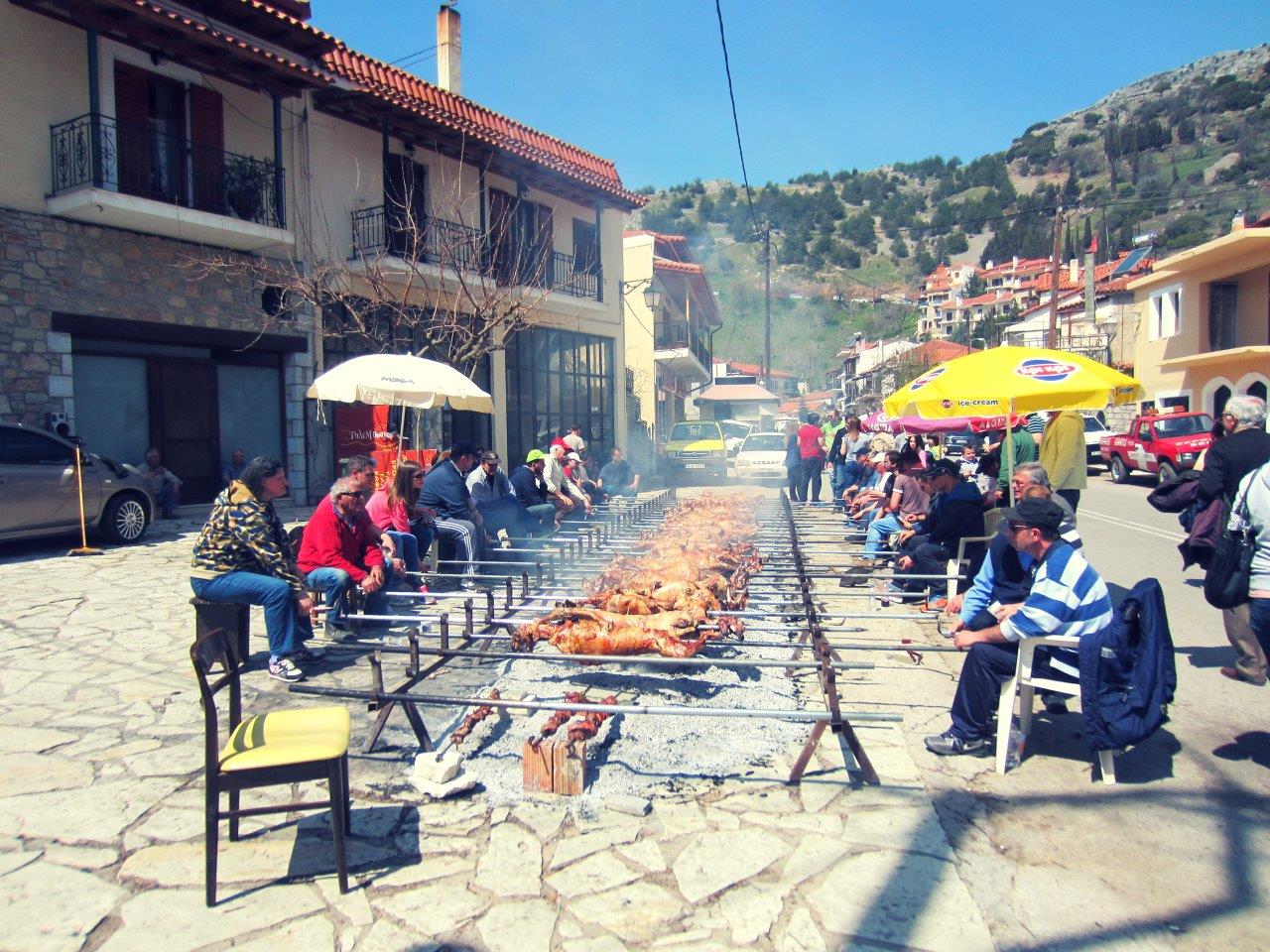 Easter is a big day and an even bigger feast, and it’s celebrated in traditional style all around Greece. In some places it is celebrated for several days. Schools remain closed throughout the Good Week and the week after Easter.

Here is some more information about what to expect if you are visiting during Greek Easter. As for Greek food, take a look here: Greek food you need to try.

Religion in Greece – Going to church

Although attending church on Sundays is not extremely important in big cities in Greece, it is quite common in rural areas and smaller towns. 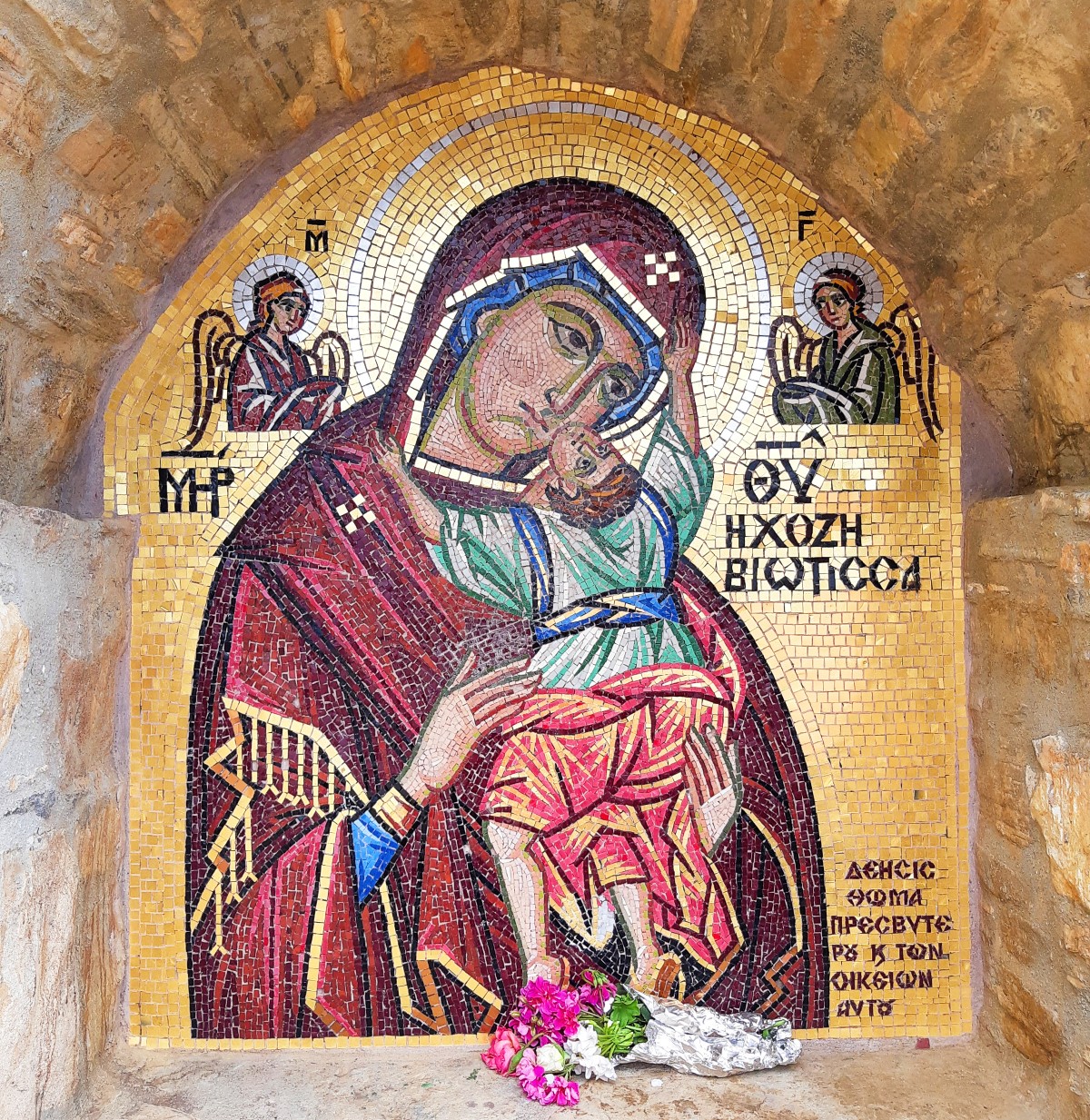 In many areas, the church is not only a place to worship God, but also a place to meet like-minded people and to socialize. In fact, many activities, like choirs or excursions, are organized by the local churches.

A panigiri is a local feast in celebration of a saint. Since there are several saints in Greece, there is an abundance  of panigiria throughout the year, everywhere in the country.

Apart from the religious element, there is live music, and lots of food and drink. If you are on a Greek island, make sure you ask around. If you are lucky, you will witness one of the best examples of religion meeting Greek culture. My favourite choice for a panigiri? Ikaria!

Religion in Greece – The evil eye

The evil eye is a common idea around the Mediterranean, and not only. It is a curse, believed to be given to a person by someone looking at them.

Although the evil eye tradition is arguably of a pagan nature, the Orthodox church accepts it nevertheless. 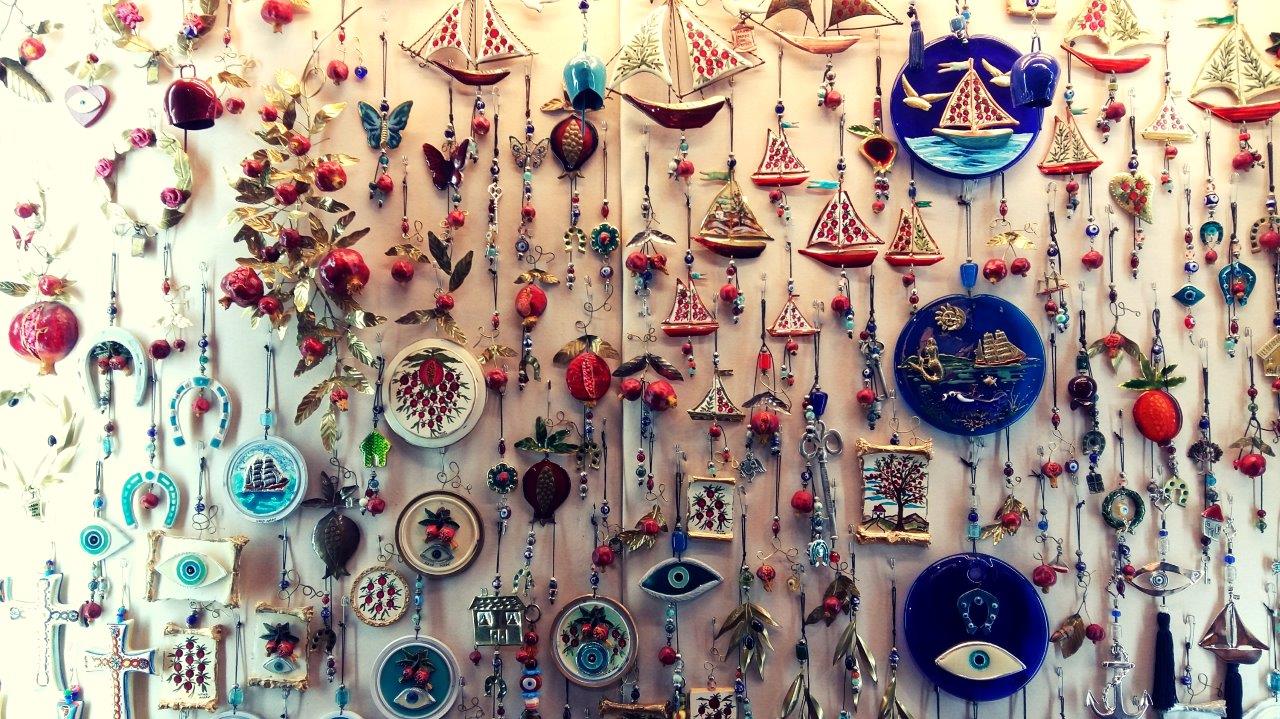 If you walk around any of the touristy areas in Greece, you are likely to come across several pieces of jewellery or decoration that will keep the evil eye away.

Here is some more information on the concept of the evil eye. The resemblance to the Eye of Horus might not be entirely a coincidence!

You can visit most of the Greek monasteries and nunneries at specified times. Just remember to be modestly dressed and behave accordingly.

Here are some questions that people often ask about religion in Greece:

What is the main religion in Greece?

How many religions are there in Greece?

Apart from Christian Orthodoxy, there are small percentages of people who follow other religions in Greece. Examples are Catholics, Protestants, Muslims, and people who follow the Greek National Religion, which is related to the 12 Olympian Gods.

Is Greece an Islamic country?

Greece is not an Islamic country. There are, however, Muslim people in Greece. The Muslim minority is about 1% of the population.

What are the Greek religious beliefs?

The main religion in Greece is Christian Orthodoxy. With that said, not everyone in Greece follows these principles. Some people identify as agnostics or atheists.

Is Christianity a Greek religion?

This question cannot be answered in a couple of lines. We’d first need to define what it means to be ‘Greek’, which is a whole different chapter.

Hi! I am Vanessa from Athens. Religion in Greece is tied to our long history, and is a fascinating subject. While you are likely to meet people who self-identify as agnostics, the truth is that religion is still tied to what we call “Greek culture”. I’d love to hear your opinion on our religious traditions, so feel free to comment below. 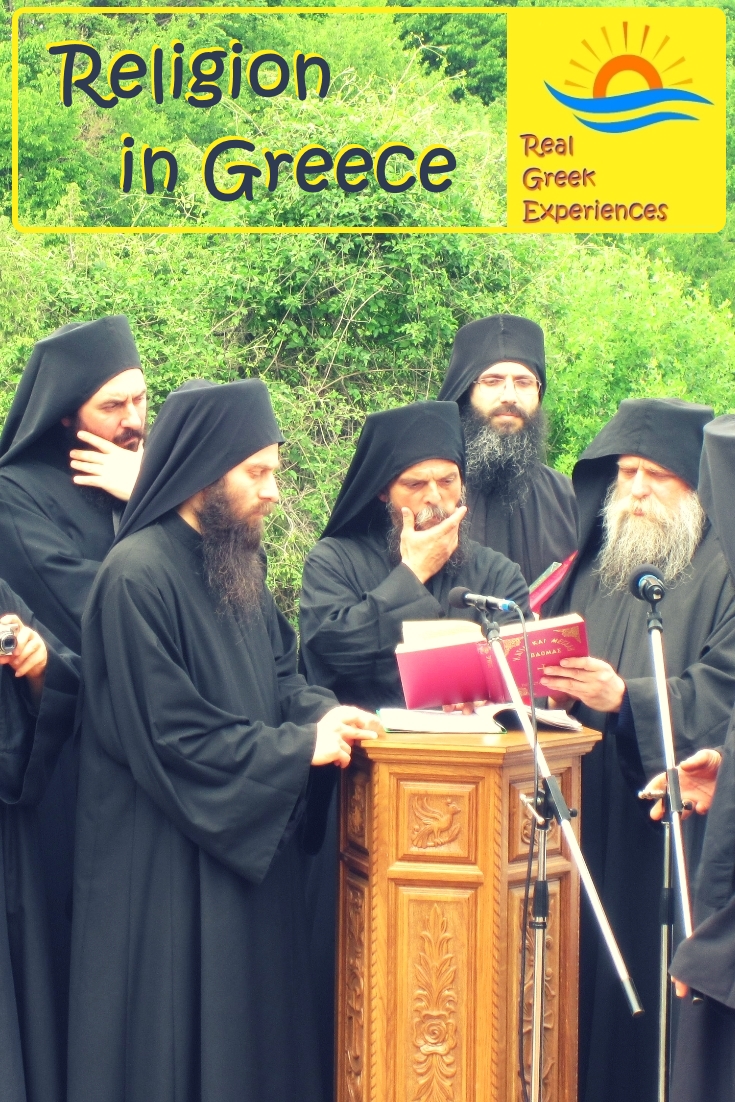 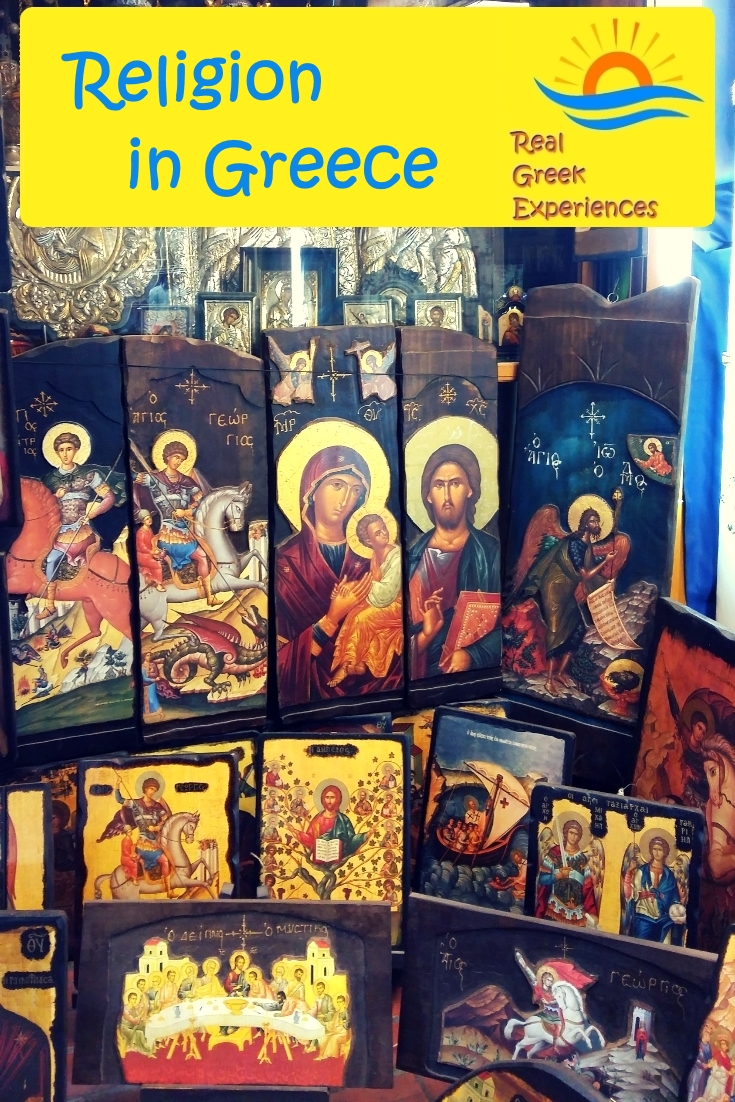