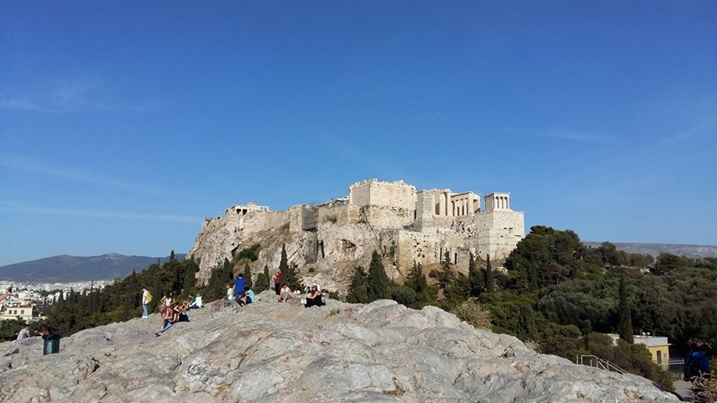 Are you looking for the best way to explore ancient Athens? This guide will help you get the most value out of the Ancient Athens combined ticket, for the Acropolis and other archaeological sites in Athens.

Ask anyone what is the number one thing to see in Athens, and they will definitely say “The Acropolis“. Without a doubt, the stunning 2,500 year-old archaeological site is a must-see when you are visiting Athens.

However, it’s not the only ancient site you can visit in our vibrant city! Ancient Athens is all around if you know where to look, and you don’t need to pay a separate entrance fee for each site. 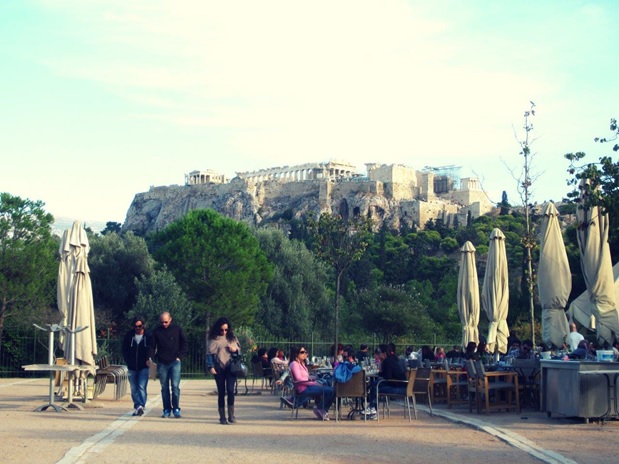 When you are in Athens, you can buy a combined ticket, valid for five days from the day of purchase. The combined ticket allows you to visit all the ticketed archaeological sites in central Athens and it costs 30 Euro. You can only visit each site once.

The Athens combined ticket for archaeological sites includes entrance to:

You can easily buy your combined ticket online in advance of your visit here: Combined ticket for the ancient sites in Athens. There’s a small handling fee.

Student and senior discounts are available for all tickets, and entrance to all the sites is free on selected dates during the year. For more information, you can visit the official website or this article on Ancient Athens for free.

If you are buying discounted tickets, remember to bring your ID or student ID on the day you visit.

There is also an official website where you can get your tickets online. However, the design is a bit dated, and sometimes the website doesn’t seem to work very well. You can try it here if you want.

You can easily visit the ancient sites yourself. However, taking a tour with a licensed guide will definitely enhance your experience and your visit to Athens. In addition, you will typically get priority tickets and won’t need to queue. 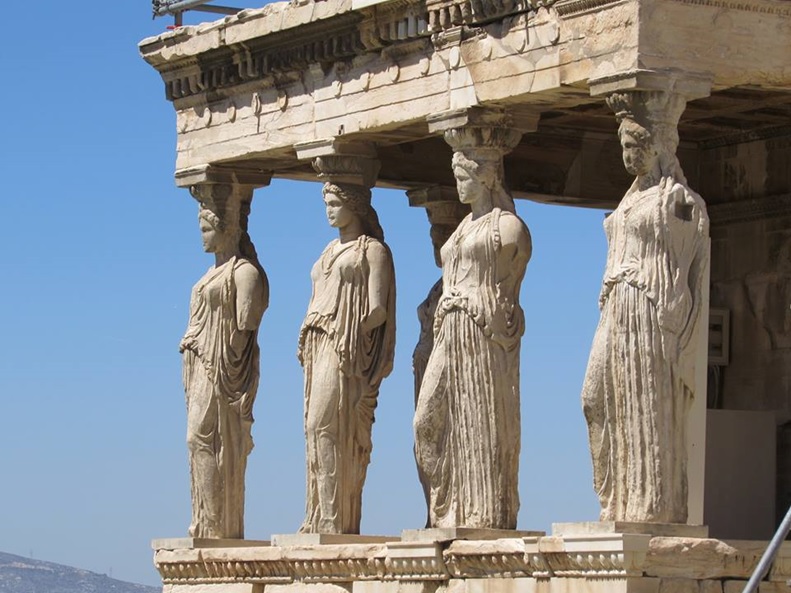 There are dozens of tours to choose from, which you can compare and book on GetYourGuide. This guided tour of the Acropolis gets some of the highest ratings, and is excellent value for money.

Or you could go for this combined tour of the Acropolis and the Acropolis Museum instead. This one will give you a better insight on life in Ancient Athens.

And now, let’s look at the seven ancient sites in Athens which you can explore with your combo ticket!

1. The Acropolis of Athens

It would be a difficult task to write anything new about this superb ancient Greek monumental complex, which was declared a UNESCO monument in 1987. The Acropolis of Athens is located on a hill of about 150 m, and it consists of fortification walls and temples.

The first wall was built during the 13th century BC, in the Mycenaean era. The complex reached its peak in the 6th and 5th centuries BC, especially at the time when Pericles was ruling Athens.

Nowadays, you can see the remains of a number of monuments. The most famous temple is the Parthenon, which was dedicated to Athena, the city’s patron goddess.

Other important temples are the Erechtheion and the temple of Athena Nike, while the Propylaia Gate is monumental.

These ancient constructions have survived earthquakes, wars, bombings, alterations and even poor restoration works. They are still standing today, reminding everyone of Greece’s unique past.

In ancient Athens, the Agora was the heart of the city-state. In fact, the Greek word “agora” means “gathering place” or “assembly”.

The Agora was the centre of political, artistic, athletic, spiritual and everyday life of Athens. Along with the Acropolis, this is where Democracy, Philosophy, Theatre and Freedom of Expression and Speech were born. 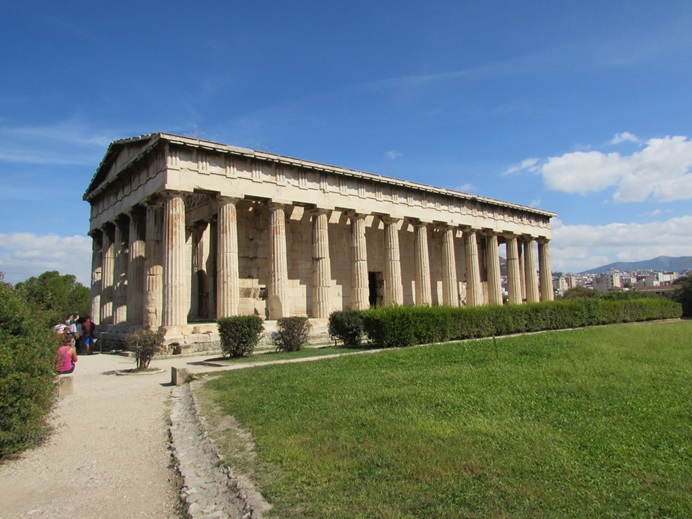 The highlights of the Agora include the Stoa of Attalos, and the temple of Hephaestus. The Stoa of Attalos, which has been rebuilt and transformed into the Museum of the Ancient Agora, was quite possibly the first Mall in history.

The temple of Hephaestus is the best preserved temple in the whole of Greece!

Apart from those, you might be surprised to see a well-preserved Byzantine church, the Church of the Holy Apostles, built in the 10th century AD.

Time required: 2 hours minimum
Single Entry Fee: 10 Euro (1/4 – 31/10) or 5 Euro (1/11 – 31/3)
Closest Metro Stations: Monastiraki and Thisseio
We recommend: Taking water (water might be available at vending machines inside, but it’s best to have some just in case)

Here is my article about the Ancient Agora in Athens.

3. Kerameikos and the Archaeological Museum of Kerameikos

The archaeological site of the Kerameikos is often overlooked by visitors, but I strongly suggest you visit. It’s one of the most important areas of ancient Athens.

The area was developed around the banks of river Eridanos, whose banks are still visible today. Named after the Greek word for pottery, the area originally served as a settlement for potters and vase painters, and was the main production centre of the famous Athenian vases.

The site was later converted into a burial ground, which eventually became ancient Athens’ most important cemetery. 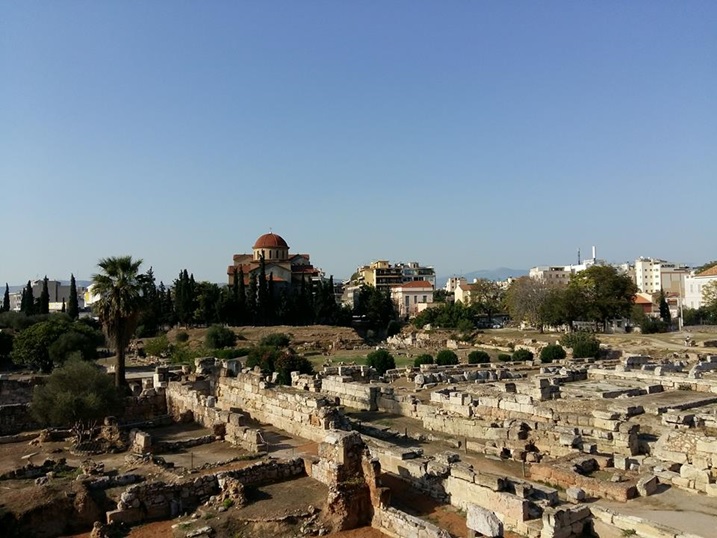 The site of Kerameikos contains a part of the Themistoclean Wall, which was built in 478 BC to protect the ancient city of Athens from the Spartans.

Parts of the Wall, together with the gate of Dipylon and the Sacred Gate are preserved today. These were the starting points of the Panathenaic procession and the procession of the Eleusinian Mysteries respectively.

Excavations in the Kerameikos area began in 1870. During the construction of Kerameikos metro station, approximately 1,000 tombs from the 4th and 5th centuries BC were discovered. Burial-related exhibits are showcased in the museum of Kerameikos.

4. The Temple of Olympian Zeus (Olympieio)

The Temple of Olympian Zeus is one of the oldest temples in Athens, and one of the largest ever built in Greece. Its construction was initiated by the tyrant Peisistratus the Young in 515 BC, but was stopped due to the fall of tyranny.

It resumed in 174 BC by Antiochus IV Epiphanes, and was eventually completed by Emperor Hadrian in AD 124/125. Over the years, a new city wall, a large Late Roman cemetery, and an extensive Byzantine settlement were developed in the area. 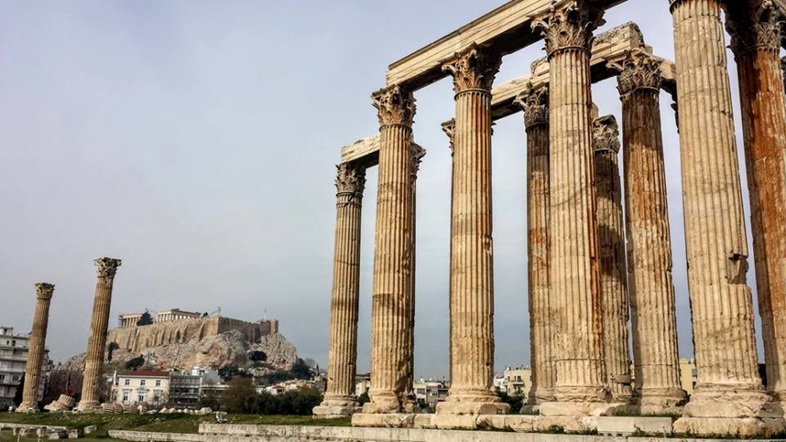 Excavations on the site began in 1883. Of the original 104 columns, only 15 remain standing today. A 16th column collapsed during an earthquake in 1852, and the pieces can still be seen on the ground.

The site is very impressive, not least for the sheer size of the columns! If you walk around, you can see Acropolis in the background.

5. The Roman Agora of Athens and the Tower of the Winds

The Roman Agora of Athens was built between 19 – 11 BC, with donations by Julius Caesar and Augustus. After the Herulae invaded Athens in AD 267, it became the centre of the city of Athens.

During the Byzantine period and the Ottoman occupation, the site of the Roman Agora was covered by newly built houses, churches, the Fethiye mosque and workshops. Excavations of the site began in the 1830s. 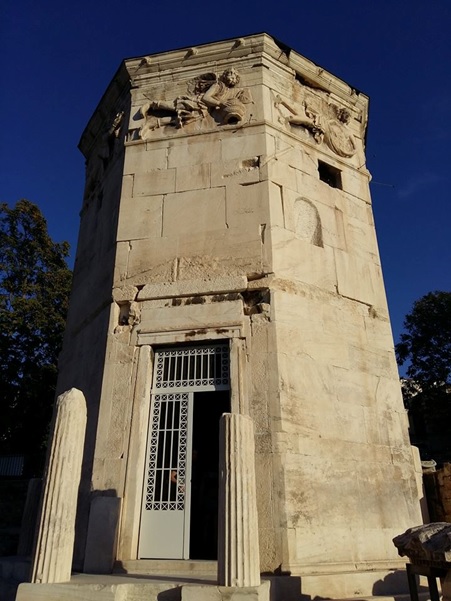 Within the Roman Agora, you can also see the Tower of the Winds, built in the 1st century BC by the astronomer Andronicos, from Kyrrhos in Macedonia.

The tower is built of white Pentelic marble and is octagonal. It was originally used to identify the direction the wind blew; there were also sundials on the external walls and a water clock in the interior.

Over the years, it was converted into a Christian church and into the tekke of the Dervishes. Excavations started in 1837 and the latest restoration work finished in 2016.

Whilst the single entrance fee probably doesn’t offer great value, you should definitely see it with the Athens combined ticket.

The Roman emperor Hadrian built this library in A.D. 132, and at the time it contained several rolls of papyrus books. Like other ancient Greek monuments, it was destroyed by the Herulae in A.D. 267.

In subsequent years, different types of Christian churches were built on top of the site. During the Ottoman occupation, the site became the seat of the Governor (Voevode). 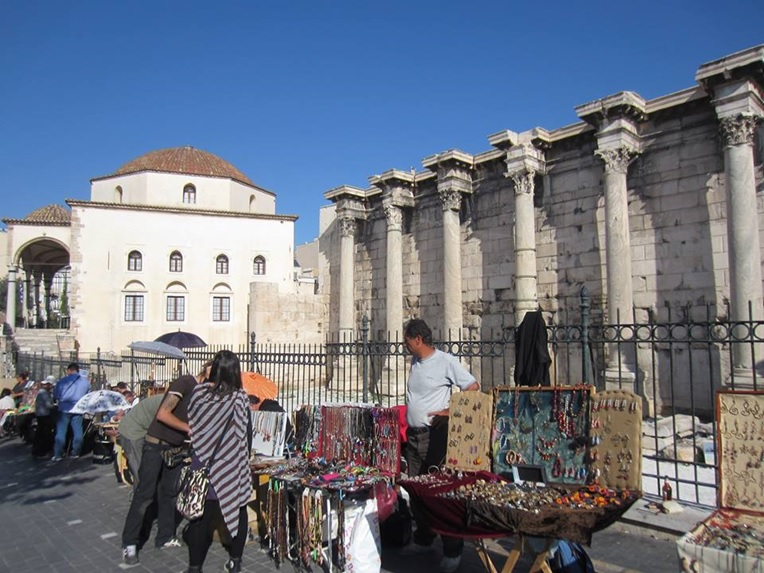 An archaeological site opened to the public in 2014, Aristotle’s Lyceum is a small park with a few ancient ruins. It’s definitely worth visiting if you have a special interest in ancient Greek philosophy. 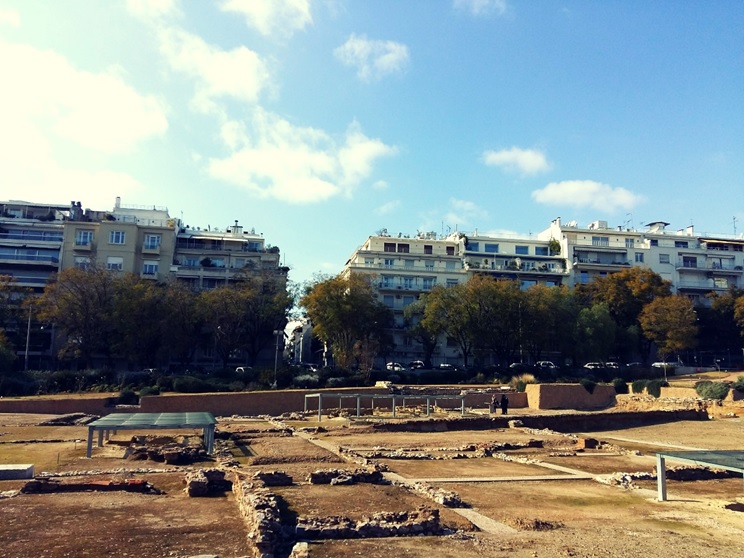 Aristotle’s Lyceum was one of the oldest gymnasia in ancient Athens. Aristotle founded his Walking School (Peripatetic School), based on the principles founded by Plato’s Academy, and taught from 335 – 323 BC.

This outdoors school taught rhetoric, philosophy and other disciplines. All Athenian men and youths were taught in the Lyceum, as part of their state military service.

These days, you can see the remains of several buildings, such as the gymnasia, a palestra, baths and a library.

You can easily combine this with a visit to the nearby historical museums. The Byzantine and Christian Museum, the Benaki Museum, and the Museum of Cycladic Art all offer a unique perspective on Greece’s long history.

FAQs about the Athens combo ticket

Here are a few questions that visitors ask:

Where can I buy Multi Site Tickets in Athens?

You can buy the multi-site combo ticket in Athens at any of the ancient sites, or you can pre-book it online.

How much does it cost to visit the Acropolis of Athens?

Entrance to the Acropolis of Athens costs 20 euro during summer, and 10 euro during winter. Discounts apply for children, students and seniors.

Where can I buy Parthenon tickets?

You can buy tickets to visit the Parthenon at the entrance of the Acropolis, or online.

Is the Acropolis free?

The Acropolis of Athens is free on 6 March, 18 April, 18 May, last weekend in September, 28 October, and the first Sunday in November – March. The Acropolis is also free for certain categories of people, like children and EU students.

What does Acropolis ticket include?

Is it worth getting the combined ticket for the ancient sites in Athens?

If you are planning to visit multiple sites in Athens, it’s worth getting the combined ticket. If you only want to visit the Acropolis, you can just buy a single entrance ticket at 20 euro (summer), or 10 euro (winter).

Those sites are not the only ones Athens has to offer! Here are a few more articles which will help you discover ancient Athens and how to get around the city:

Hi! I am Vanessa, an Athenian, and I love helping people discover more about Greece! I hope you have found this article on ancient Greek sites useful. Feel free to ask any questions right below! Also, follow my FB page for more blog posts and news about Greece.

If you want to save this article on the Ancient Athens combined ticket, pin it! 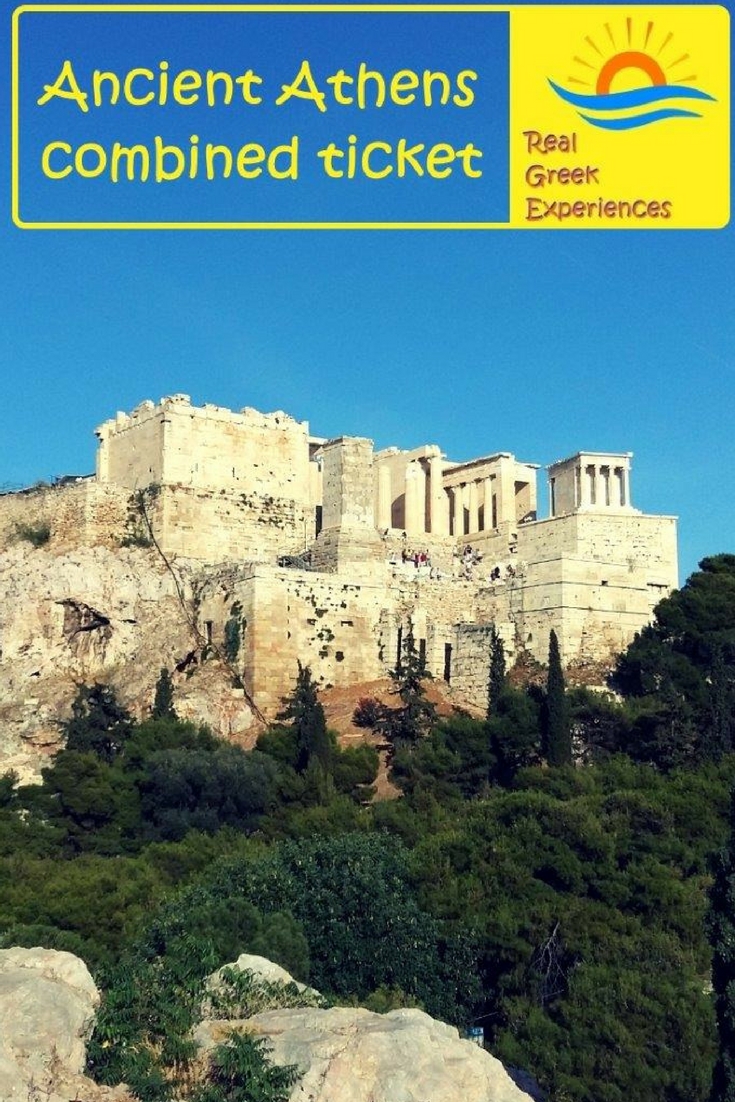