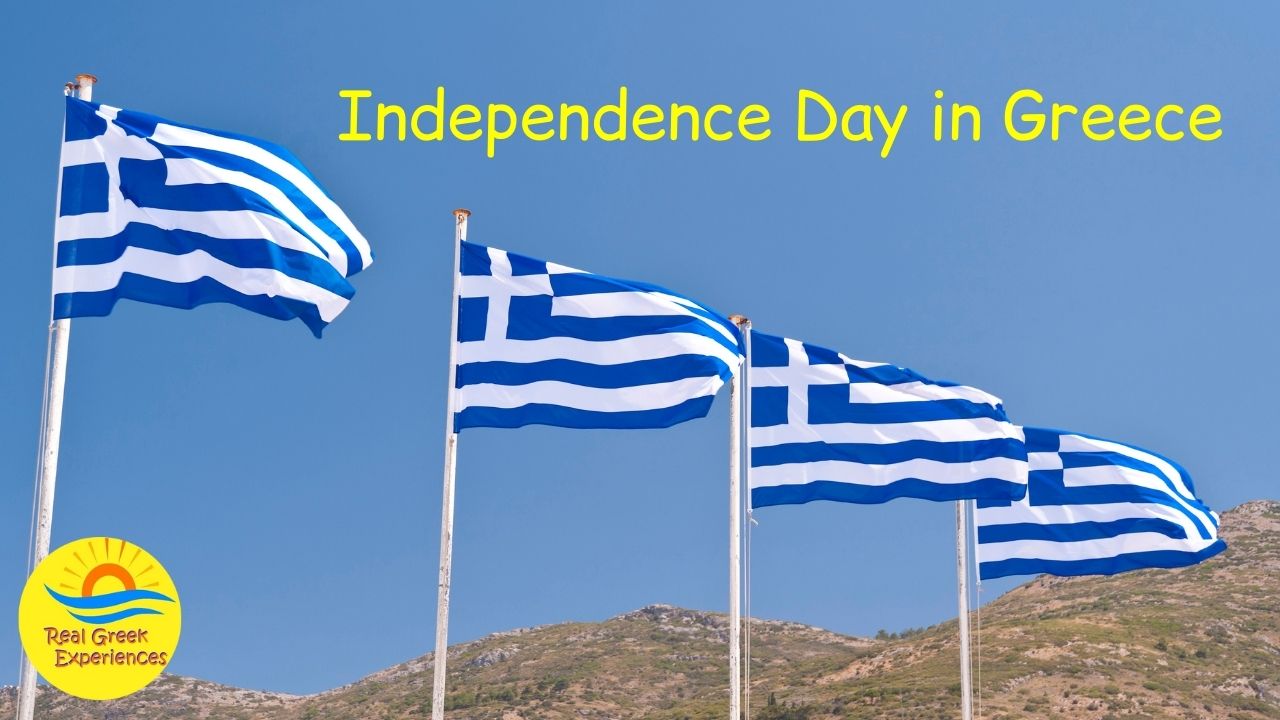 The 25th March is one of the national holidays in Greece. We celebrate the Greek War of Independence against the Ottoman Empire, which happened in 1821. The Greek Revolution eventually led to the establishment of an independent Greek state. 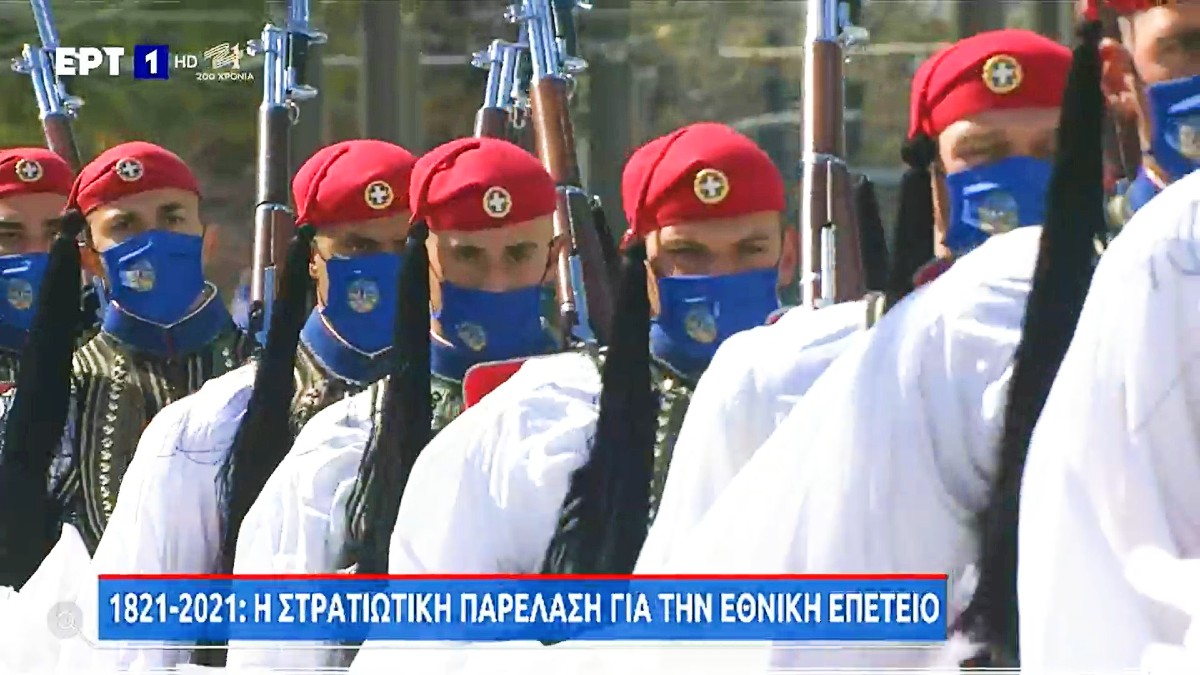 Still shot from this video

Greeks all around the world honor Greek Independence Day with school parades and military demonstrations. This includes cities that are popular among the Greek diaspora, such as New York, Chicago, Sydney and Melbourne.

Here is a little background on this important national holiday.

The Greek War of Independence against the Ottoman Empire

In the 1800s, most of the land that we know today as Greece was part of the mighty Ottoman Empire. The Ottoman Turks, who came from Anatolia, had occupied Greece in the 15th century, taking over from the Byzantine Empire.

During the four centuries of the Ottoman occupation, many attempts were made to liberate Greece, but they all fell through.

The Greek struggle against the Turkish rule

In the early 1800s, a handful of Greek revolutionaries founded a secret organization in Odessa, known as Filiki Eteria.

Their purpose was to organize the Greek people against the Ottoman Empire, and to create the first modern Greek state after liberating Greece. 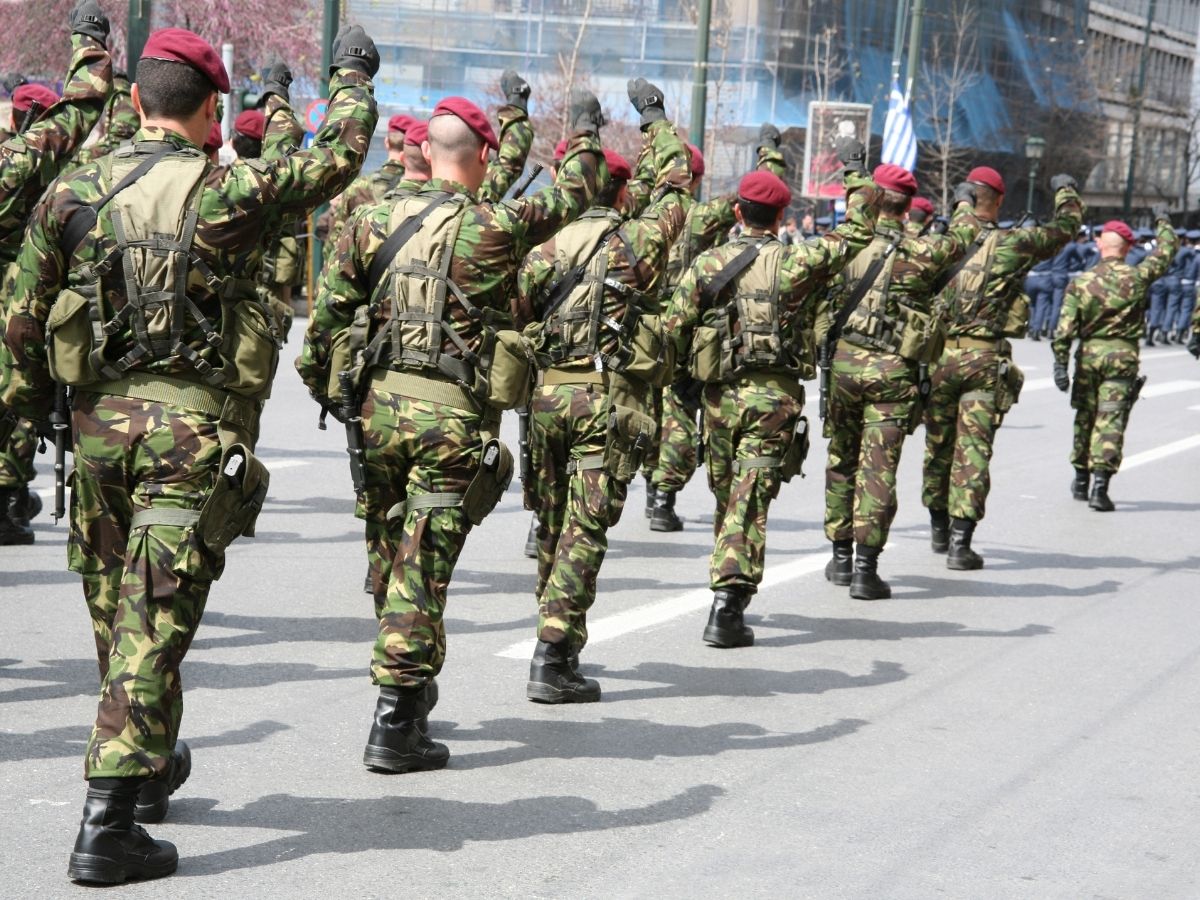 The Greek cause received a lot of support from wealthy Greeks living abroad. Certain European countries, especially Britain, France and Russia, were also in favour.

In particular, the Greek revolt elicited strong sympathy among various intellectuals of the time, who were very fond of Ancient Greece and its advanced civilization. One of them was the Philellene English poet Lord Byron, who spent several years in Greece.

In February 1821, the leader of Filiki Eteria, Alexandros Ypsilantis, started a revolt against the Ottomans in the area of the Danubian Principalities. While not successful, this revolt was followed by a series of rebellions in the area of the Peloponnese in Greece, in March 1821.

There are several versions as to when and where the Greek Revolution began. Many places in the Peloponnese, such as Areopolis in Mani, Kalamata and the Agia Lavra monastery have all been suggested as the exact spot where the Greek War began. 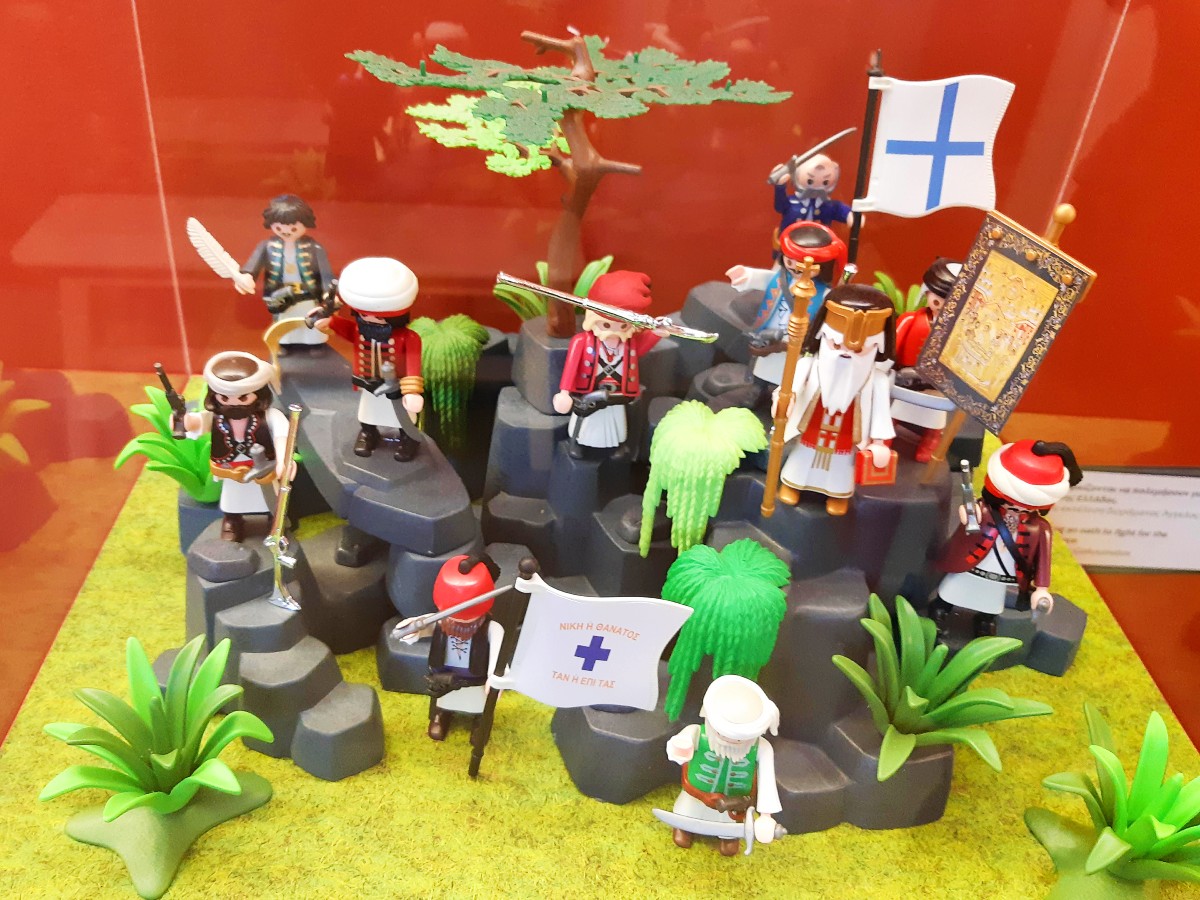 A Playmobil representation of the Greek Revolution!

The date of the official beginning of the Revolution has been set as 25 March 1821. This date is an important religious holiday in Greece, the Annunciation of the Virgin.

As many of the Greek rebels were religious, they attended church services on that day. They were hoping that the divine powers would help them in their struggle against the Ottoman rule.

In January 1822, after several battles between the Greeks and the Ottomans, the revolutionaries finally declared Greece as an independent state. In the next years, combined British, French and Russian forces were involved in the warfare. 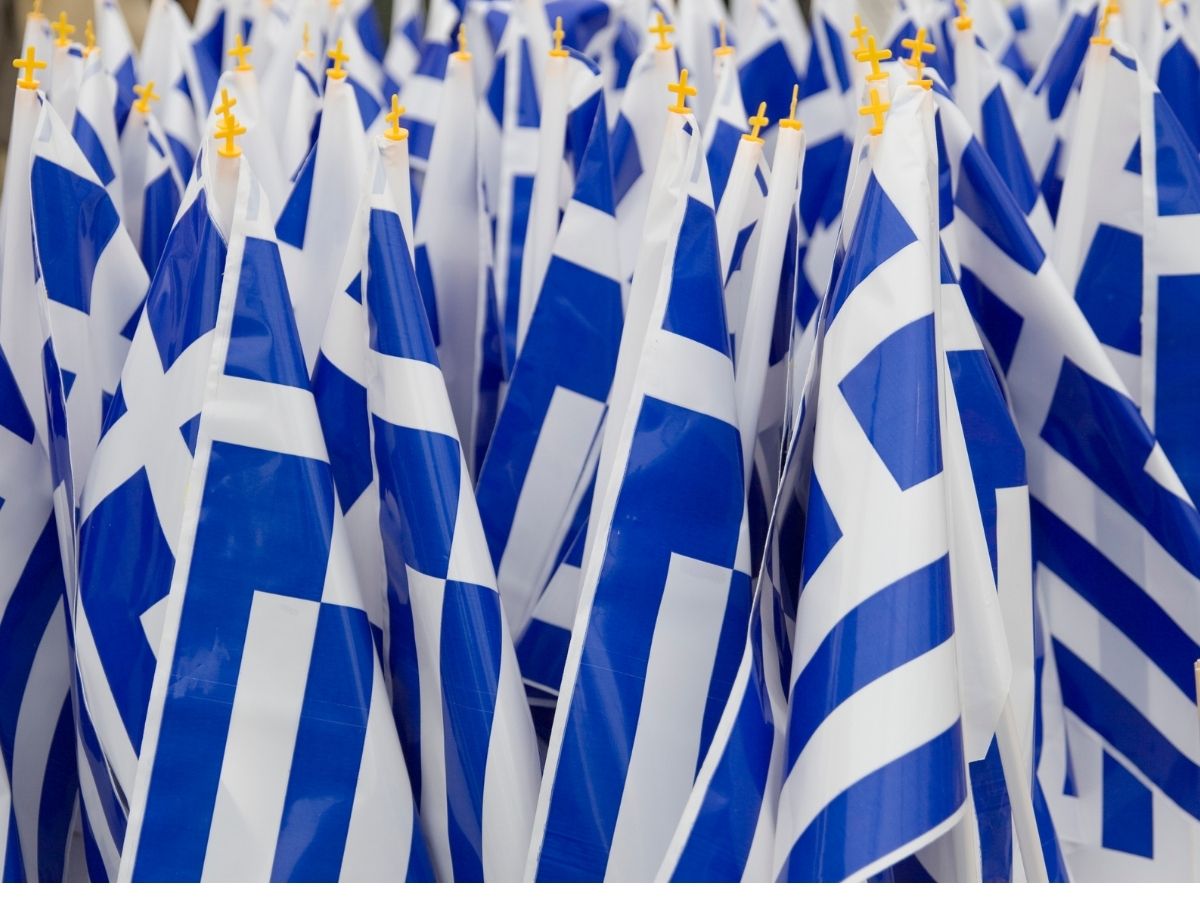 It took nine years and many battles for the Ottoman Empire to finally accept Greek autonomy in 1830, with the London Protocol.

The newly established Greek nation included the Peloponnese, Athens and Central Greece, and a few of the Aegean islands. Prince Otto of Bavaria was the first King of the Hellenic State.

Gradually, more areas were incorporated into modern Greece. As an example, the unification of Corfu and the Ionian islands was concluded in 1864. Greece’s second largest city, Thessaloniki, was unified with the rest of Greece in 1912.

The final borders of the Hellenic Republic, as we know them today, were finally recognized in 1948, with the inclusion of the Dodecanese islands. As for the blue-and-white Greek flag, this wasn’t finalized until 1978!

Greek Religion and the Annunciation Day

On the 25th of March, Orthodox Christians celebrate the Annunciation of the Virgin.

In the Greek Orthodox tradition, this was the day when the Archangel Gabriel appeared to maiden Mary. He announced to her that she would bear the son of God and divine child, Jesus Christ. 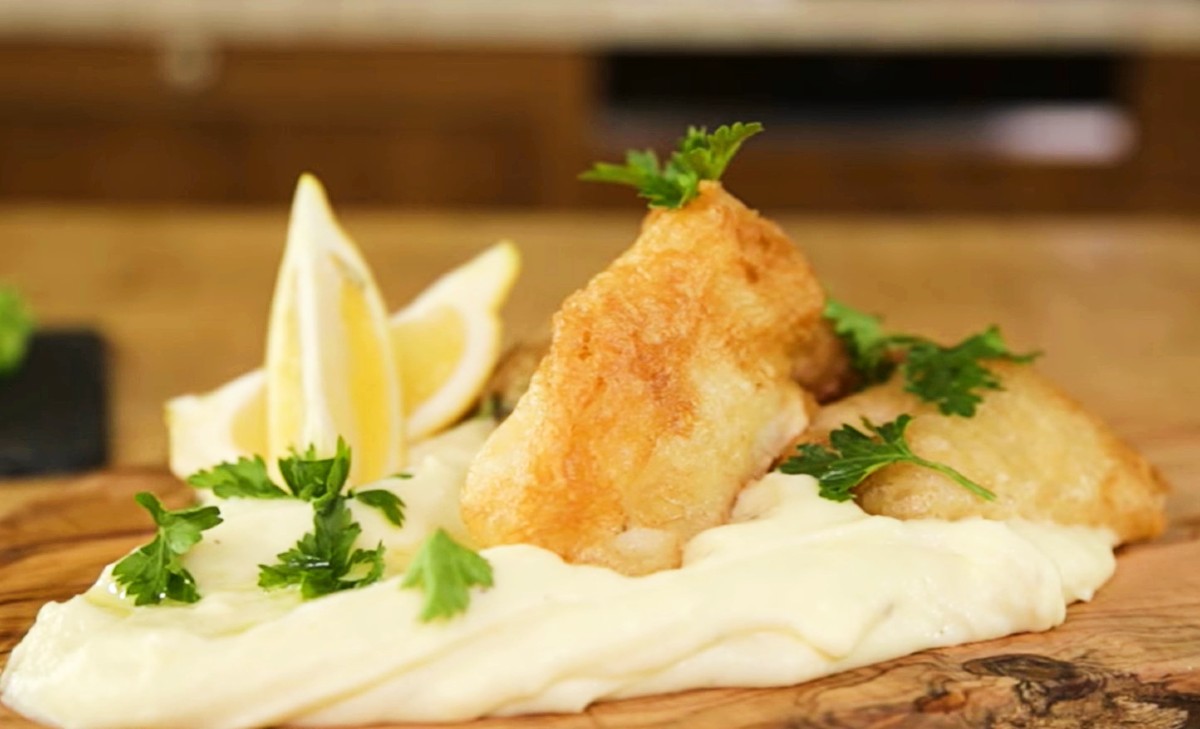 Still shot taken from this video by our renowned chef, Akis Petretzikis

On Annunciation Day, tradition calls for a special dish, deep-fried cod with a very potent garlic sauce. In Greek, we call this bakaliaros skordalia, and you can literally smell it from miles away 🙂

On the 24th March, there is a school flag parade. Schoolchildren march in traditional Greek costume or assorted clothes. As a rule, the best students of the schools carry Greek flags. 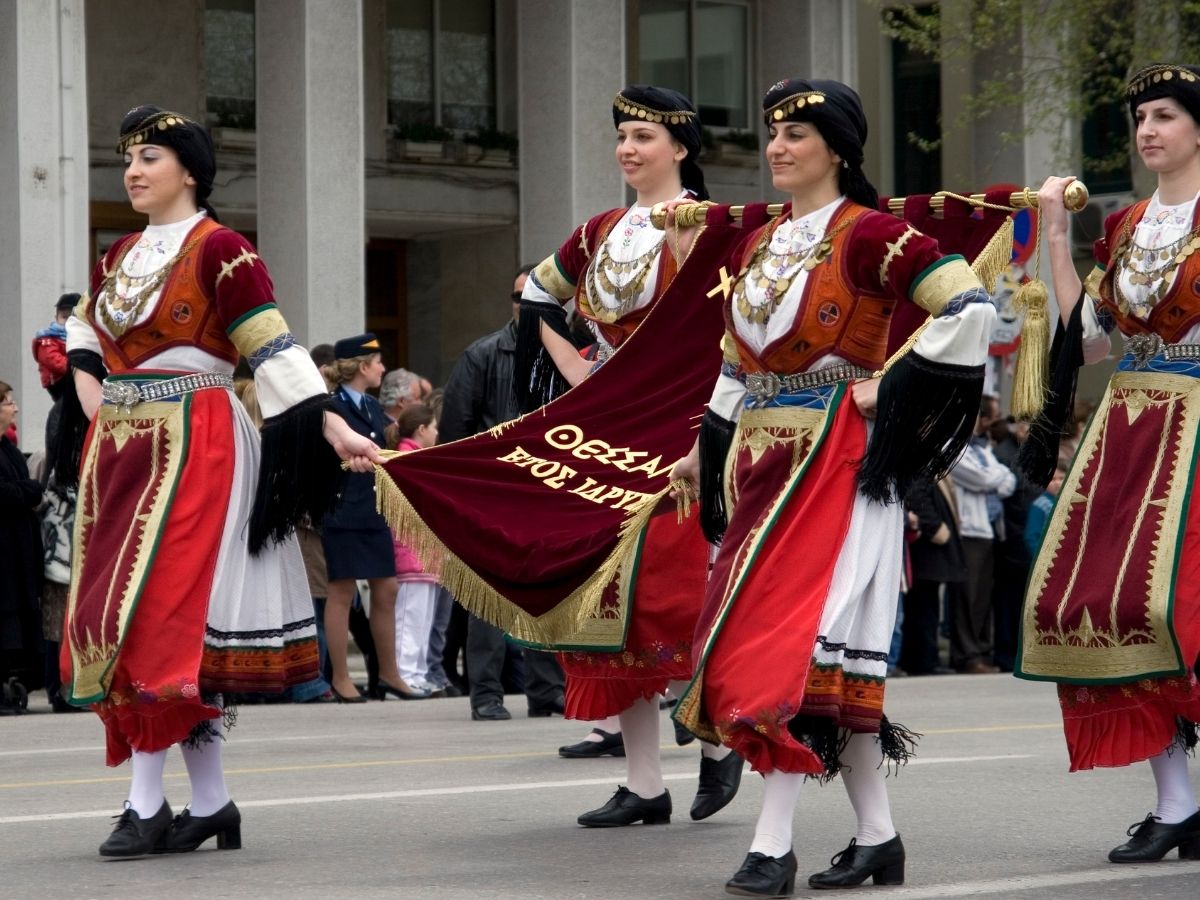 On the 25th March, Greeks celebrate with big military parades. In Athens, the parade passes in front of the House of Parliament in Syntagma Square.

You will have a chance to see the Hellenic Armed Forces, and various military vehicles. You will also see the Greek Guards, known in Greek as Evzones, dressed in traditional Greek uniforms.

Independence Day parades also take place in several countries around the world where there is strong Greek presence. Many of the people participating in the parades wear traditional Greek folk costumes.

As mentioned earlier, March 25 is one of the public holidays in Greece. Shops, ancient sites and most museums in Athens and Greece remain closed. Some tavernas and restaurants are open, but it’s best to call and ask. 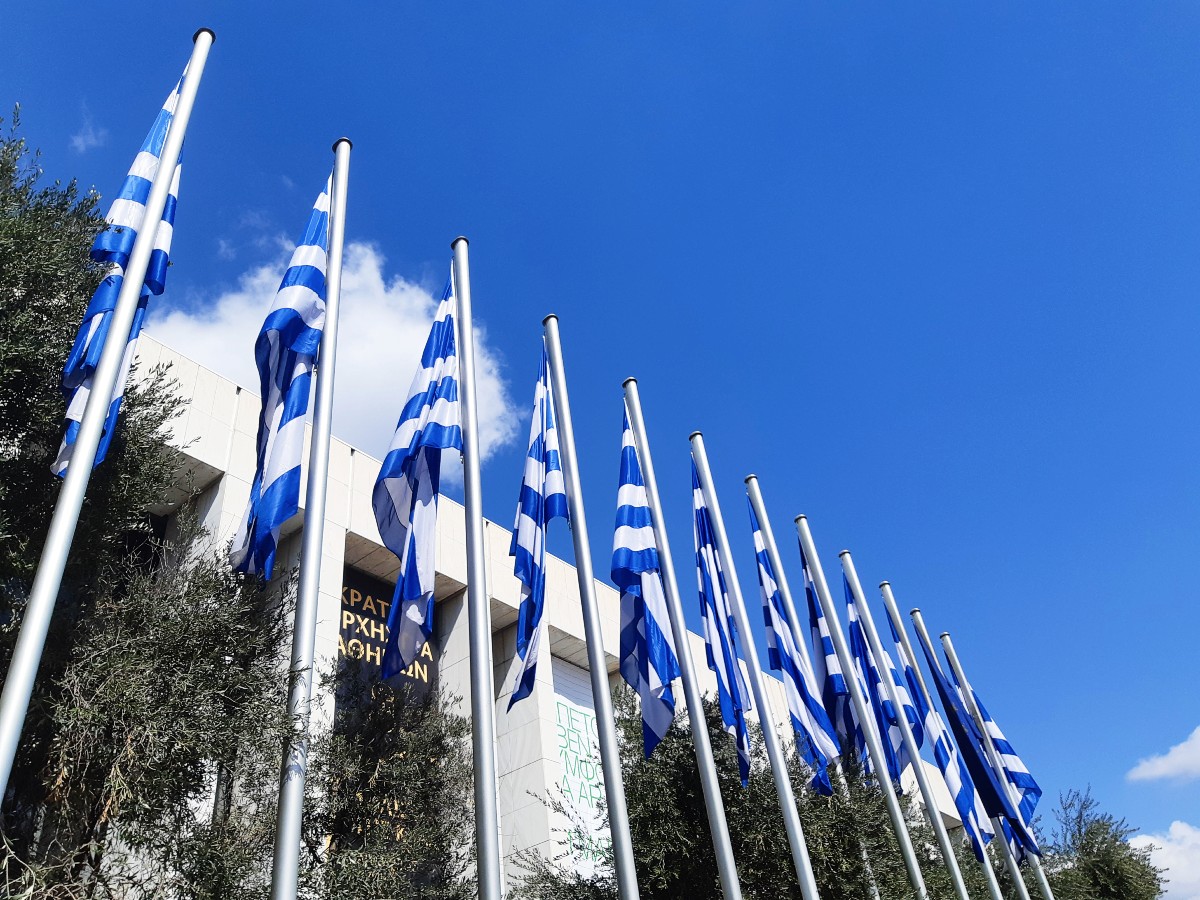 Interestingly, the Acropolis museum remains open on the day, offering free entrance. It’s a great opportunity to visit and explore the collections.

FAQ about Independence Day in Greece

Here are a few questions related to the Greek Independence Day:

How does Greece celebrate Independence Day?

Why does Greece have an Independence Day?

On Independence Day, 25th of March, Greece celebrates the Greek Revolution against the Ottoman Empire, which happened in 1821.

What do you say to Greeks on Independence Day?

On Greek Independence Day, Greeks greet each other with the phrase ‘Chronia polla’. This literally translates to ‘live many years’.

In which year did Greece declare independence?

Greece declared independence from the Ottoman Empire in January 1822, several months after the beginning of the Greek War of Independence.

Who did Greece gain independence from?

The Greeks gained independence from the Ottoman Empire, that had conquered Greece for almost 400 years.

More about Greek celebrations and culture

If you enjoyed reading this article, have a look at these other ones:

Hello! I am Vanessa from Athens, and I hope you found this quick refresher of modern Greek history interesting. If you are in Greece, how will you celebrate our national holiday? Let me know in the comments!