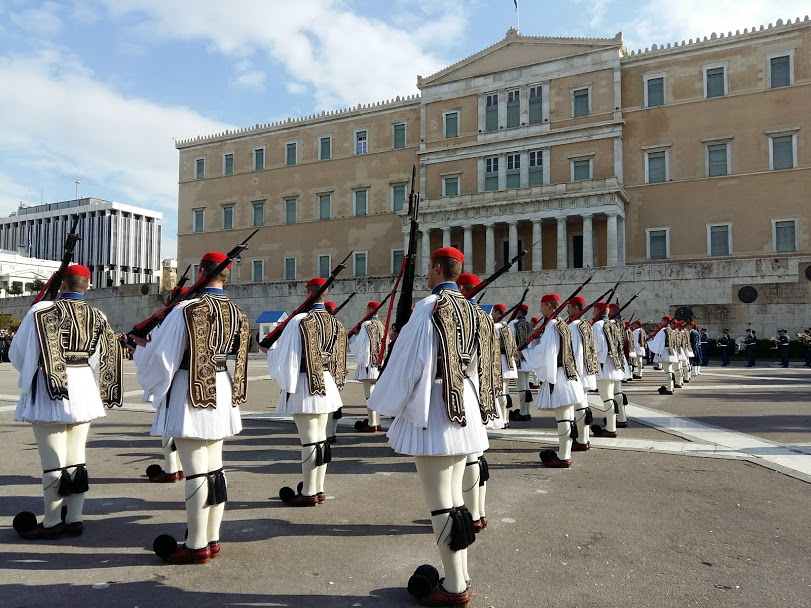 The Changing of the Guards in Athens

Watching the Changing of the Guards is one of the most popular free things to do in Athens. On a daily basis, hundreds of tourists pass by Syntagma Square to experience this hourly traditional ceremony. 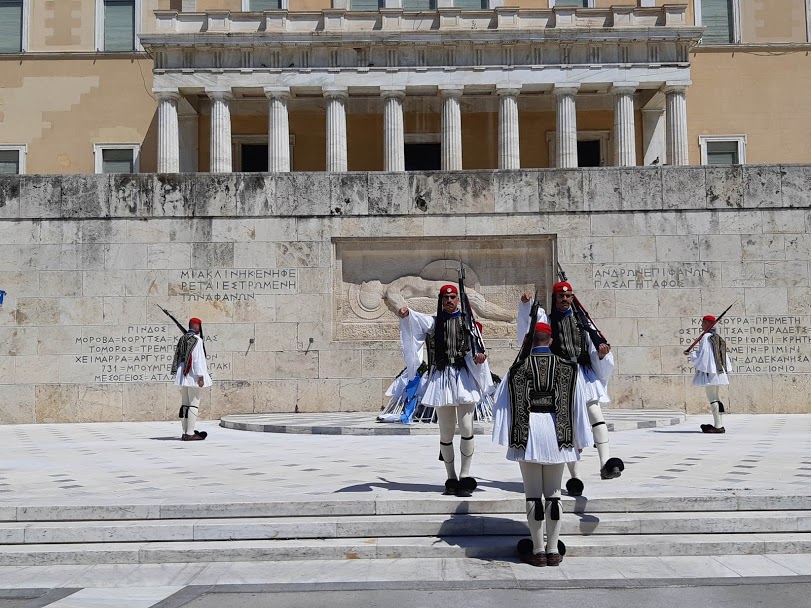 Even if you have never been to the Greek capital, you may still have seen a photo or a video of the Changing of the Guards in Athens. This activity is very popular with visitors, and there is always a crowd that comes to see the Guards.

There is something very unique about the Guards changing in Athens. For some people, it might make them think about its significance. For others, it’s just an opportunity for some quaint photos. Whatever it is to you, make sure you stop and observe it for a few minutes.

Where does the Changing of the Guards in Athens happen?

The Changing of the Guards in Athens happens right in front of the Parliament and the Tomb of the Unknown Soldier. 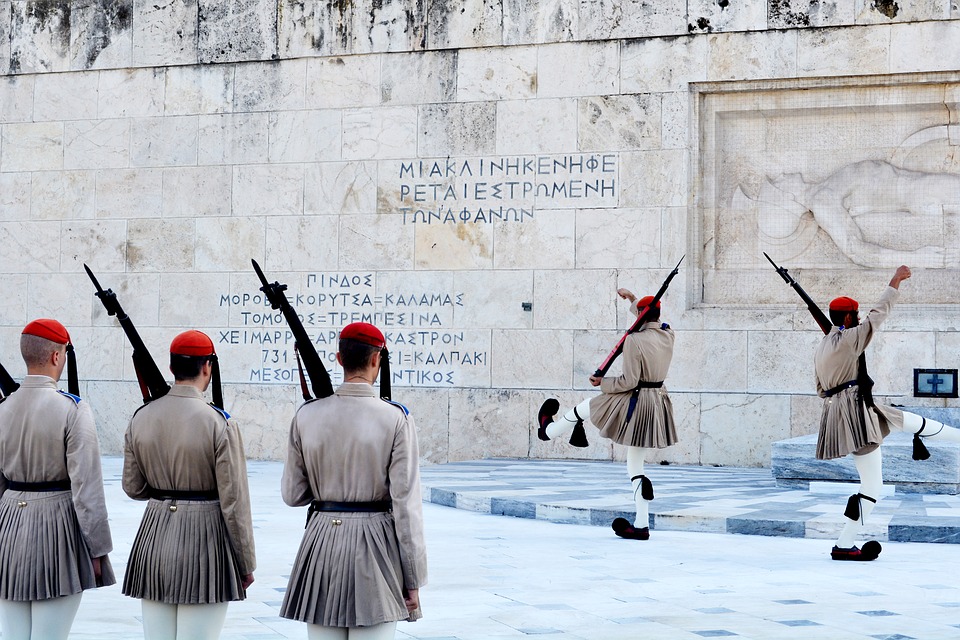 The impressive neoclassical building which is home to the Greek Parliament was built in the 1830s, to serve as the Palace of King Otto and Queen Amalia. The royal couple moved in the building in 1843.

After King Otto’s departure several other kings and queens lived in the Palace. The Greek Parliament started operating in the Palace in 1935.

The Tomb of the Unknown Soldier was constructed in 1929-1930, in memory to all the people who lost their lives fighting for Greece. The Guards, called Evzones in Greek, are guarding this special monument.

The Tomb is empty – it’s called a cenotaph – and it was made according to the Ancient Greek custom.

Changing of the Guards in Athens Times

The Changing of the Guards in Athens happens every hour, on the hour. Rain, shine or snow, the Guards will be there. They march in front of the Tomb, and change shifts in couples, using intricately choreographed moves. 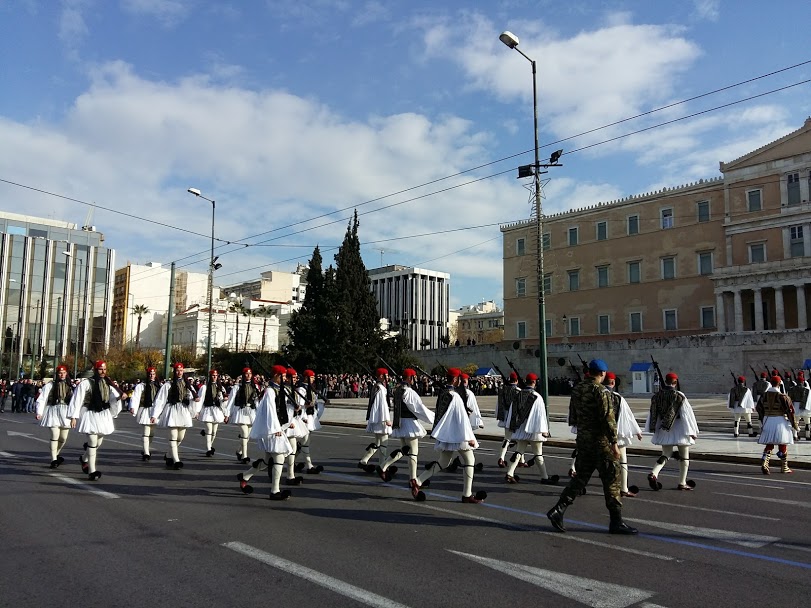 At 11am on Sundays, a much more impressive ceremony takes place, where a large group of Evzones gather in front of the Parliament.

The Sunday Changing of the Guards is planned to the last tiny detail, and it’s almost theatrical. If you are in Athens on a Sunday you should definitely come and check it out. Make sure you go early, as it’s really popular with visitors as well as locals.

Who are the Evzones? 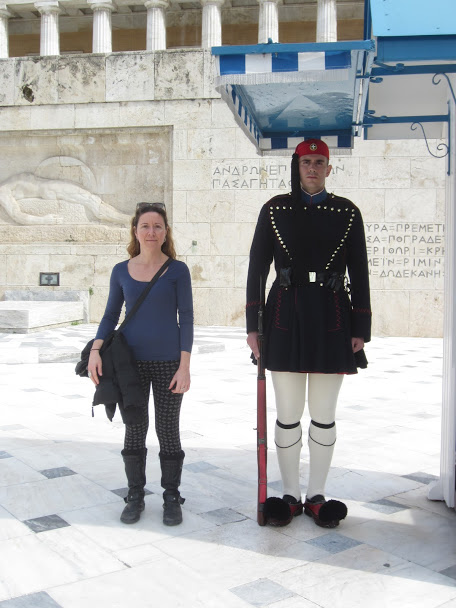 In order to become an Evzonas, a solder has to go through extremely challenging training, lasting for four weeks. Not everyone trained to be an Evzonas will eventually make it.

You will notice that the Evzones have to stay motionless, almost statue-like, for a whole hour. Dealing with stillness is a very important part of their training.

Other than the extreme summer hear and winter cold, some of the worst things for the Evzones are the insects, due to the proximity to the Botanical Gardens. It’s worth noting that each Evzonas normally has 4-6 hours of service per day!

Can I take a photo with the Evzones?

It is fine to take a photo with one of the Evzones, however please be respectful and polite. I totally get that you want a photo of yourself standing right next to this impressive Greek guy, but remember that he is there for a purpose.

Besides that, if you act with disrespect, you are facing serious consequences – the least of which is to be yelled at by the accompanying soldier. I’ve seen that happen, and it was not fun at all. 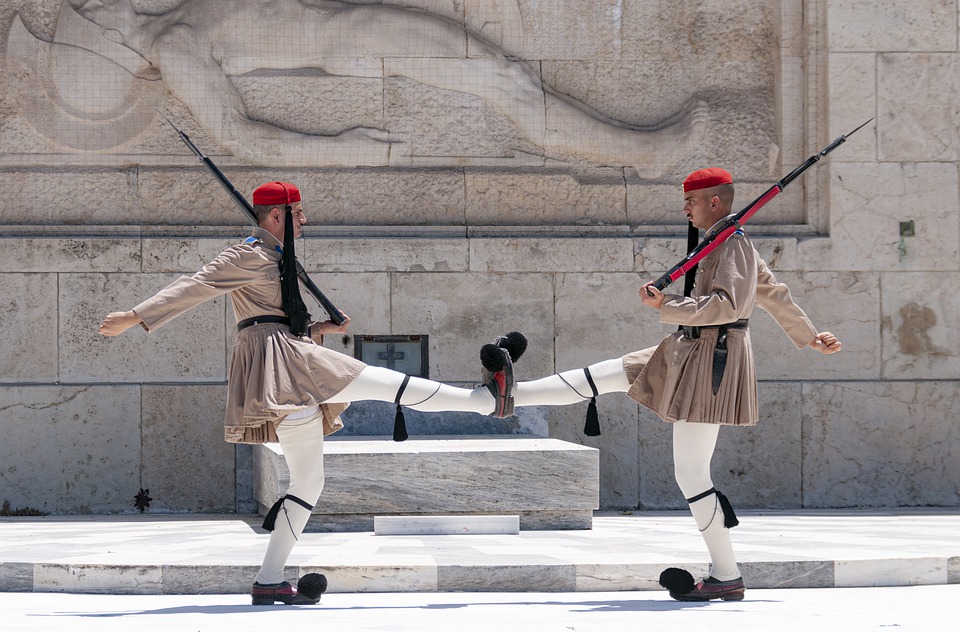 Interesting detail – the military service in Greece is mandatory, and it’s not exactly a paid service, unless you consider the basic monthly salary of 8.70 euro to be paid service. This is the standard amount that the Evzones are paid per month, though it can increase if they are married, have children etc.

At the same time, being selected to be an Evzonas of the Presidential Guard is considered an utmost privilege.Occasionally, some Guards travel abroad, to participate in ceremonial parades all around the world.

What are these uniforms the Evzones are wearing?

The uniforms worn by the Evzones are based on traditional 19th century uniforms, which were used during the Greek War of Independence in 1821. They are all handmade by specialists.

There are a few different types of uniforms, depending on the time of the year, and the ceremony that the Evzones are participating in. Each uniform consists of several parts. 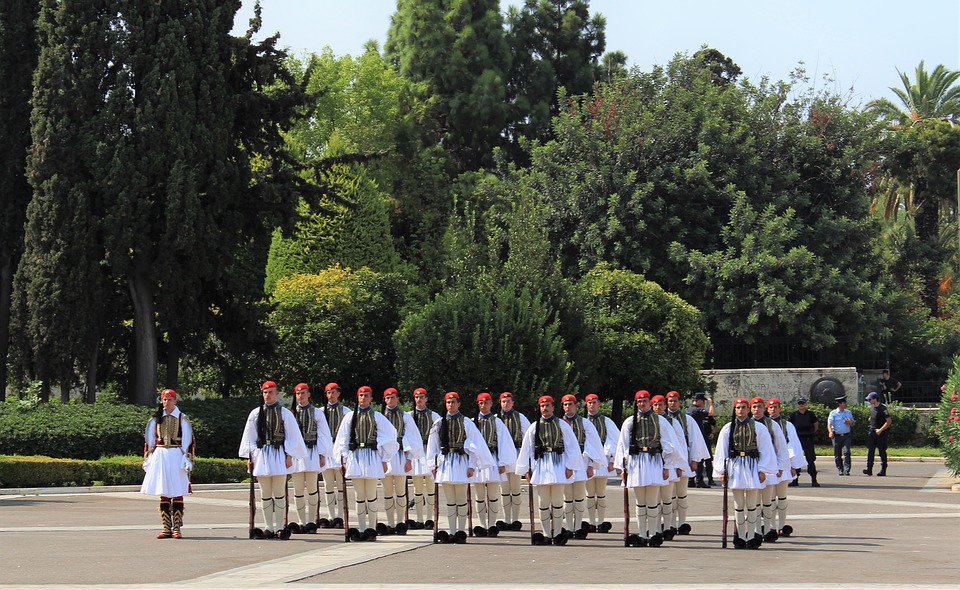 There is a green / khaki summer outfit, a blue winter outfit, and a white Sunday / ceremonial outfit, which is the most elaborate.

If you observe the Sunday ceremony, take a look at the plaited skirt, called foustanella. Each skirt is made of 30 metres of fabric, and has 400 plaits, symbolizing 400 years of Ottoman occupation. Notice also the woolen sleeveless jacket, which is a traditional 1867 design.

The Evzones also wear these uniforms in the annual military parade for Greece Independence Day, on 25 March.

Last but not least – no, the Evzones are not wearing tights. They are actually long socks, and are very important in winter, though they can be a pain in summer.

If you can read Greek, or if you just want to see what the Evzones uniforms look like, have a look at this excellent article in Greek, written by an Evzonas.

(EDIT > Thanks to the original author, Nikos G, who pointed out that there is no such thing as an x-Evzonas! Once an Evzonas, always an Evzonas!)

And how about those shoes with the pom-poms?

The shoes worn by the Evzones are very special. Like the rest of the uniform, they are handmade by specialists. 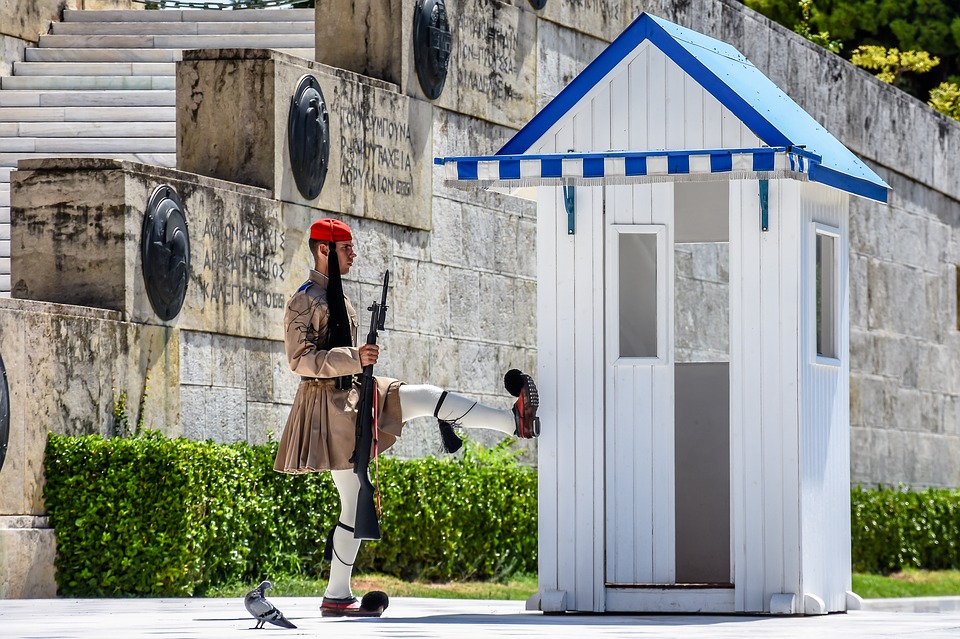 The shoes are called tsarouhia and they weigh 3 kilos each, as there are over 60 nails on each one! When you watch the Evzones do their special march, keep that weight in mind.

Traditionally, the tassel (pom pom) on the shoe could hide a weapon, such as a short blade. This could prove useful in battle.

And as for the strange march? There are several stories about why the Evzones have to lift their leg high in the air, and then hit the shoe on the ground.

As Nikos G told me, once the shoe hits the ground it makes a loud noise. There is a symbolism here: Our ancestors, who are buried in the ground, can hear that noise, and acknowledge the fact that their descendants are still around.

There’s also an other version, where King Otto asked the Guards of the time to make the loud noise. Apparently, this noise reminded him of the horses that he had when he was still living in Germany, before he became King of Greece.

Frequently asked questions about the Changing of the Guards in Athens

When it comes to the Evzones in Athens, most visitors wonder about the following:

What time do the guards change in Athens?

The guards in Athens Greece change every hour, on the hour, 24 hours a day, 356 days a year. There is also a bigger, ceremonial parade at 11 am on Sundays.

Who are the Evzones in Athens Greece?

The Evzones in Athens Greece are specially selected Greek men who are serving in the military. In order to be selected as a Guard, a soldier has to be between 1.88 m and 2.05 m tall.

Why do Greek soldiers have pom poms on their shoes?

The Guards wear a special type of shoe, called tsarouhi, which is decorated with a pom pom / tassel. Traditionally, this tassel was used as a hiding place for a short blade, which was useful in battle.

The characteristic Evzones march involves lifting the leg high up in the air. When the shoe hits the ground, it makes a loud noise. This noise is meant to be heard by our dead ancestors, and assure them that Greeks are still alive and strong.

Where is Syntagma Square in Athens?

Syntagma Square is considered to be the central point in Athens. It is right in front of the Old Parliament building, close to the National Gardens. Both the blue and red metro lines pass by Syntagma Square.

The Changing of the Guards in Athens

I hope that this article has made you appreciate the Changing of the Guards and their hard training! If you have any questions about their life, the uniforms or anything else about the Evzones, feel free to ask in the comments, and I’ll get back to you.

Hi! I am Vanessa, and I am an Athenian. I find the whole background info on the Changing of the Guards in Athens quite fascinating! For more articles on Greek culture and tips on travelling to Greece, please follow my FB page and FB group. 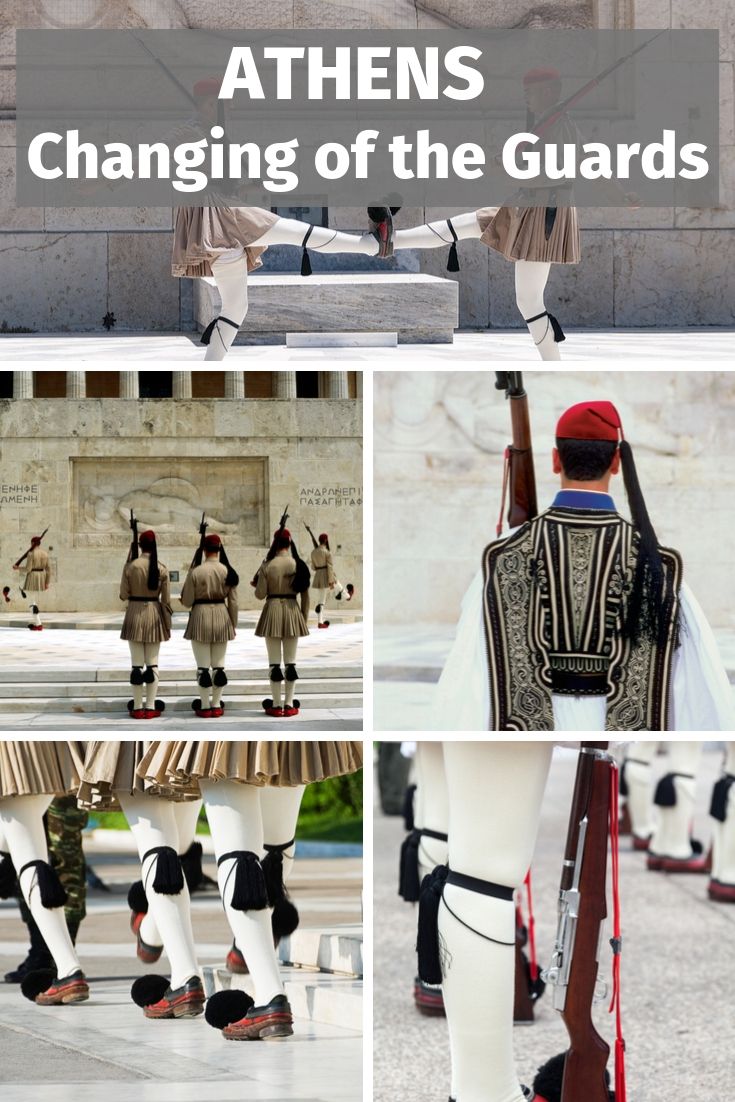 4 thoughts on “The Ceremonial Changing Of The Guards In Athens”