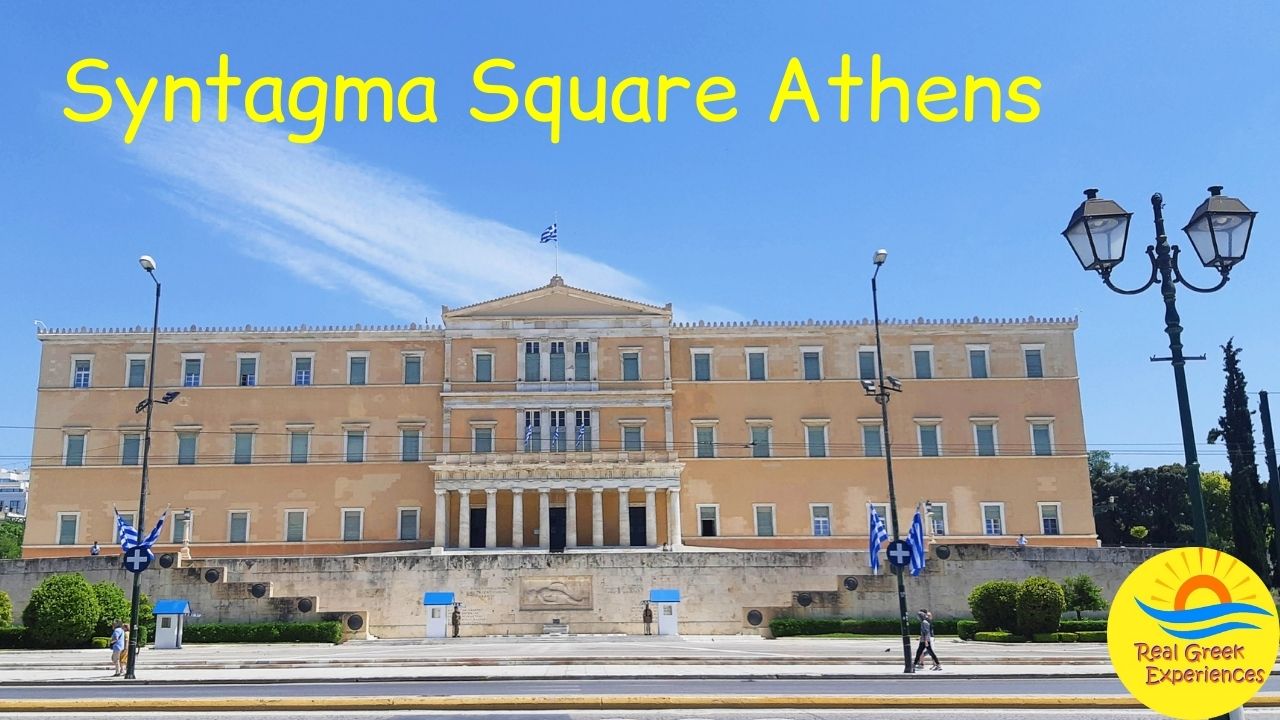 Syntagma Square is the most central area in Athens Greece. Here is everything you need to know about Syntagma Square, including its recent history and all its main attractions.

Where is Syntagma Square Athens

Ask any Athenian, and they will tell you that Syntagma Square is the very heart of Athens. The distance to every town in Greece is measured in terms of how far it is from Syntagma Square. 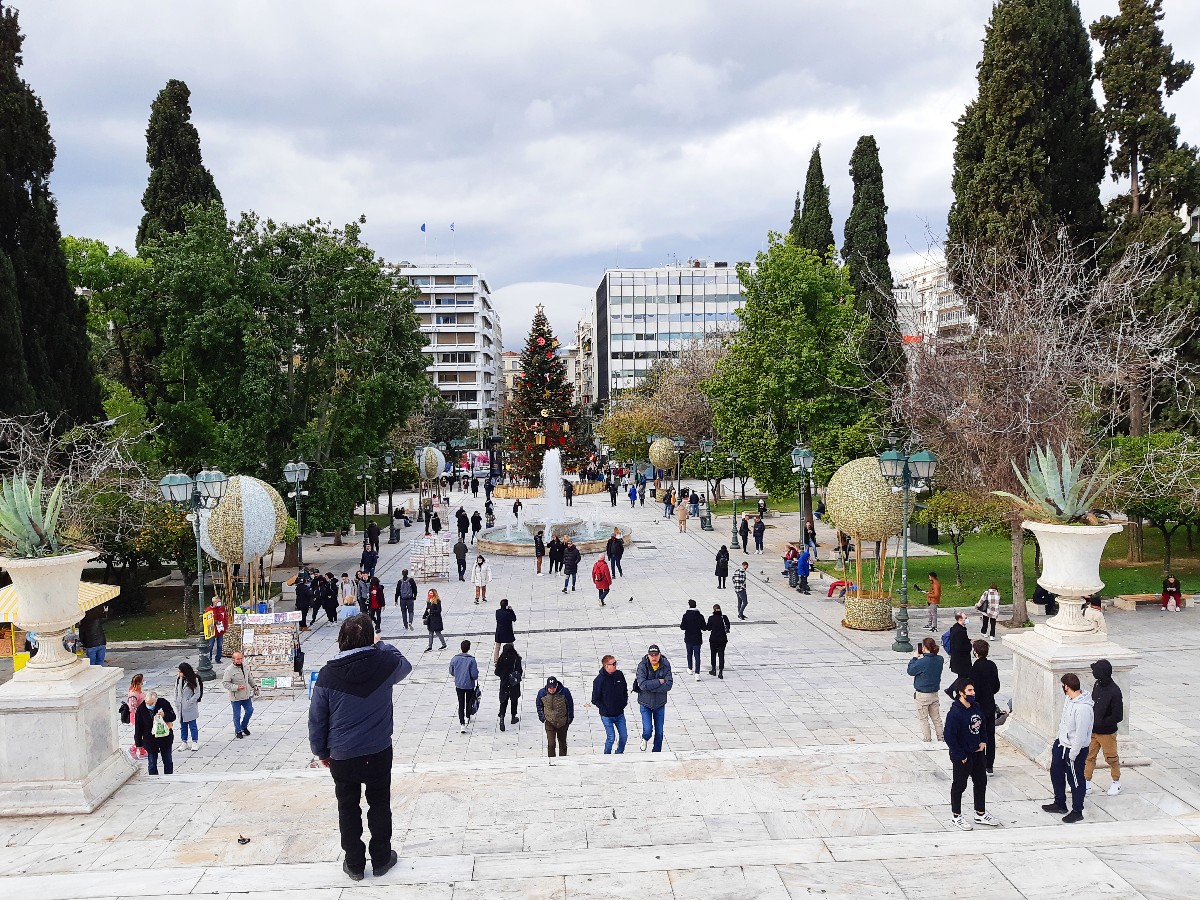 Syntagma is the most visited square in the Greek capital. It is walking distance from several attractions, such as the Acropolis of Athens, the Ancient Agora, Anafiotika and the temple of Olympian Zeus.

Around the square, you will find a few iconic landmarks, like the Greek Parliament building and the National Garden. There are also a few luxury hotels, shops, restaurants and cafes.

So, what makes Syntagma Square so important? Let’s find out!

A few years after the Greek Revolution in 1821, the modern Greek state was born. Its first capital was Nafplio, a picturesque town in the Peloponnese. At the time, Athens had no more than 5,000-10,000 people. 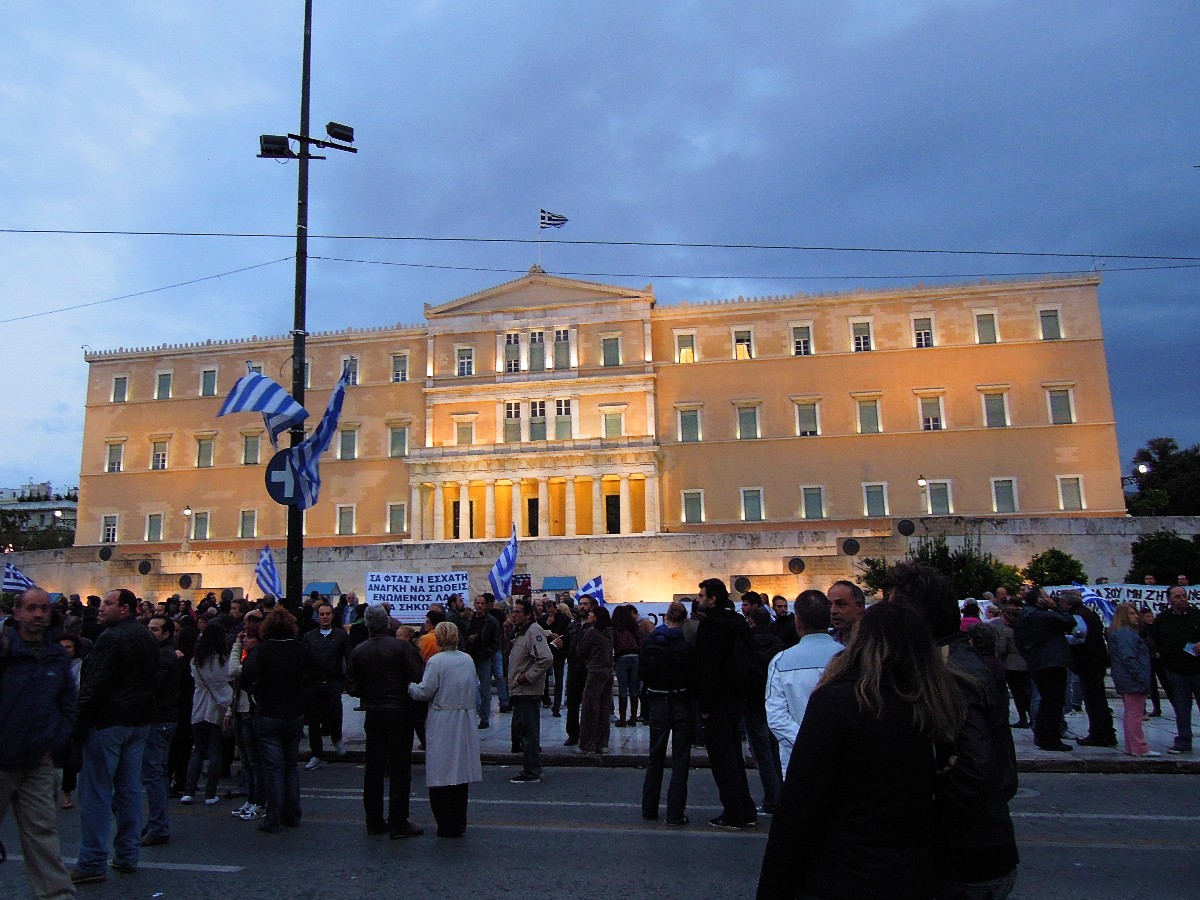 In 1832, the 17-year-old Prince Otto of Bavaria was chosen to be the King of Greece. As he was still a minor, three Bavarian officials were appointed to rule in his place.

During this period, which was termed “Bavarocracy“, the officials were unpopular, as they didn’t take into account the people’s needs. Even when Otto came of age, things didn’t seem to change, and no constitution was granted to the Greek people.

In 1835, King Otto commissioned the Bavarian architect Friedrich von Gaertner to design the Royal Palace in Athens. The beautiful neoclassical building was completed in 1843. 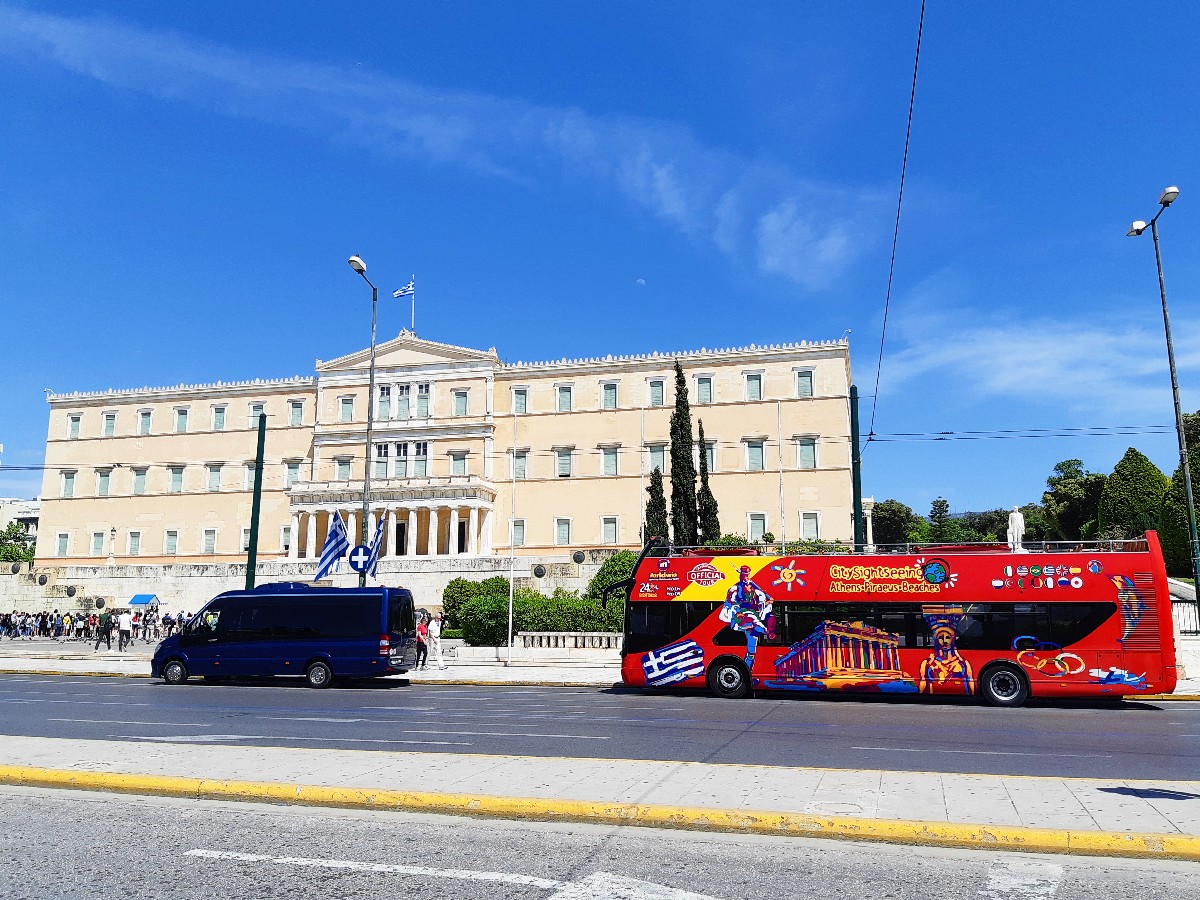 The areas of Omonia square, Kerameikos, and even Acropolis were all considered as a location for the new palace. In the end, the area that we now know as Syntagma was selected.

Apparently, the climate was slightly cooler than the other areas, which was a bonus for the Bavarian King. Also, there was a large open space in front of the Royal Palace. From then on, the area was aptly named “Palace Square”.

In 1836, King Otto married Amalia of Oldenburg. As the Palace was under construction, they lived in a smaller neoclassical building, which is currently home to the Athens City Museum. 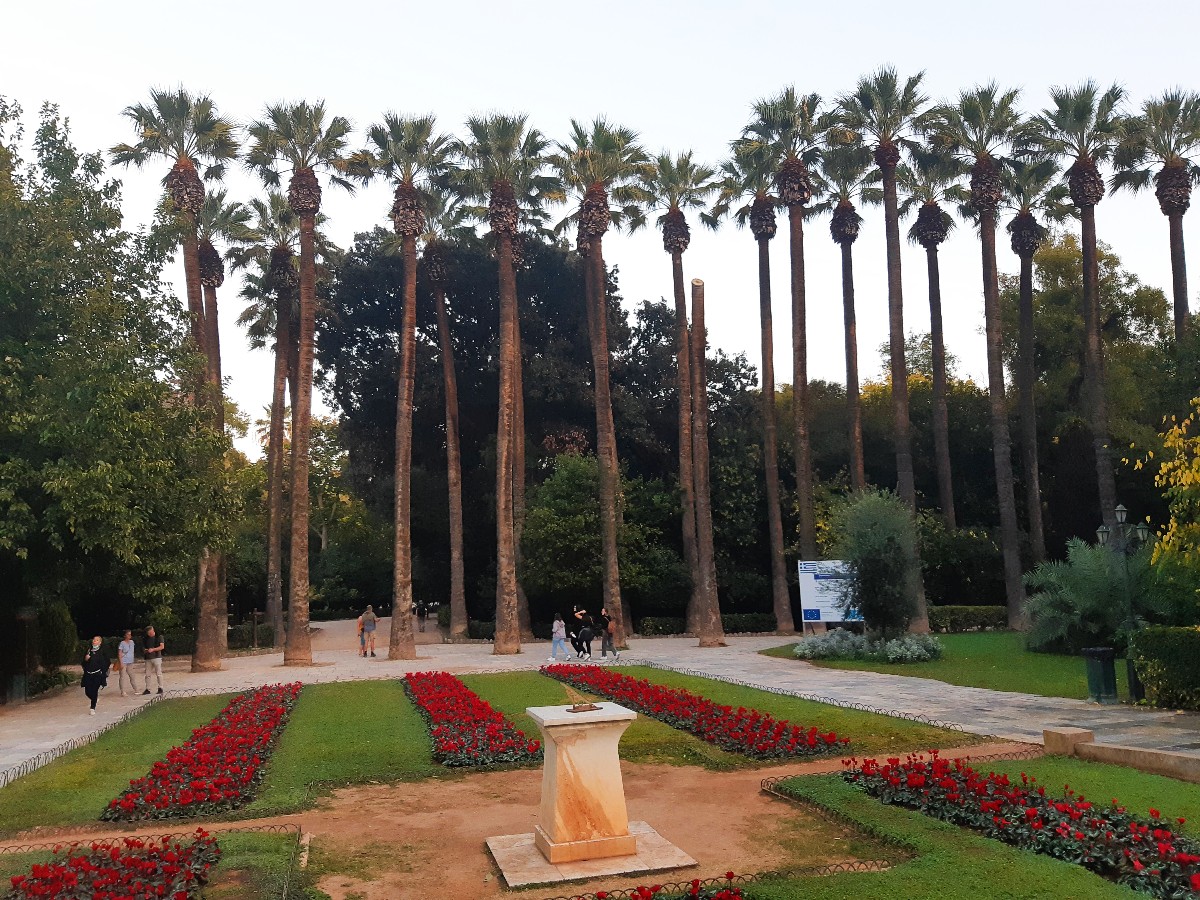 Soon after, Queen Amalia started designing a large garden next to the grounds of the Palace. These are the National Gardens, a popular park and meeting point for Athenians. She personally overviewed the progress, and even planted some of the trees herself.

During those times, the Greek people remained unhappy with Otto’s and Amalia’s rule. They viewed Otto as a foreign King who didn’t follow the Greek Orthodox tradition, refused to grant a constitution and, most importantly, had driven the country into a huge debt.

Otto and Amalia moved to the Palace in July 1843. During the night of the 3rd September 1843, a demonstration started right in front of the Palace. 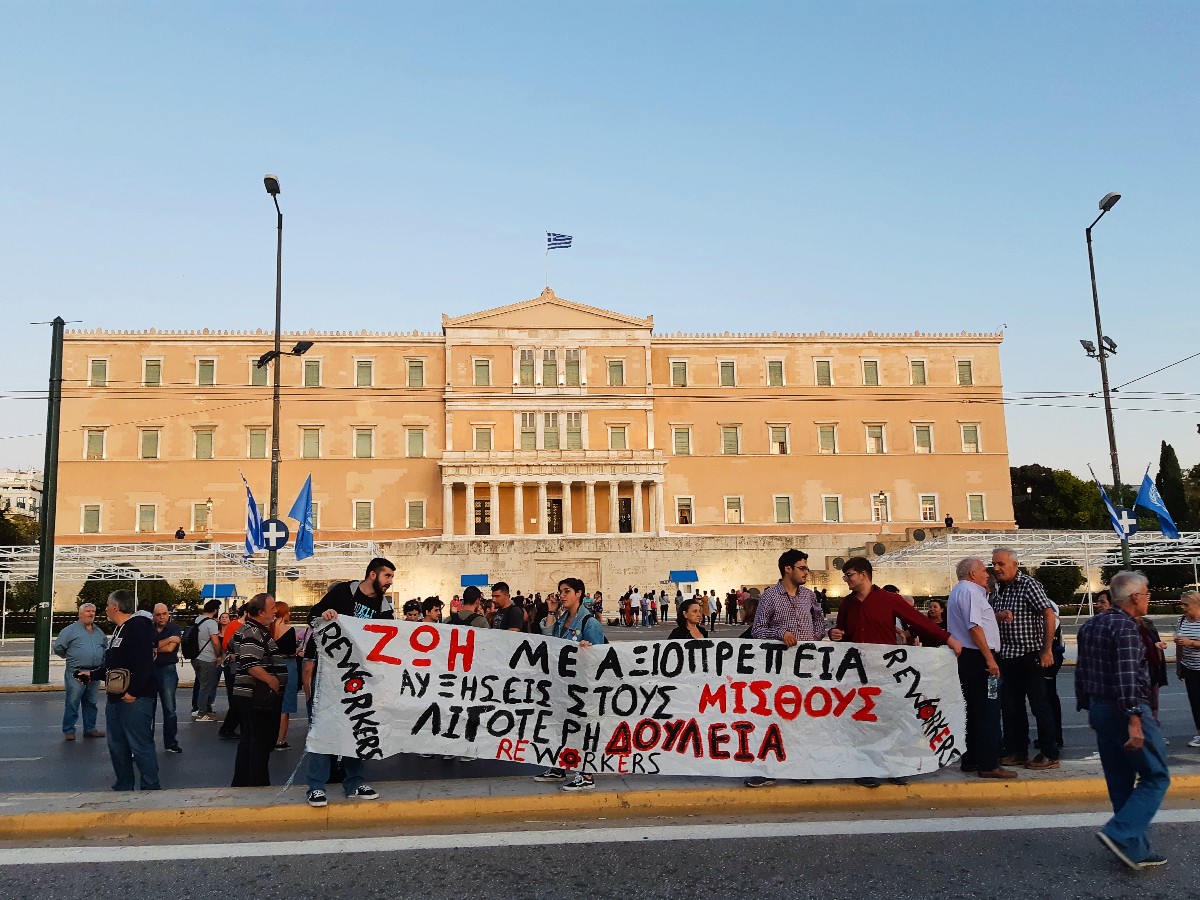 Veterans of the Greek Independence War, Greek soldiers and members of the public gathered right on the large square. They demanded that Otto give them a Constitution, or Syntagma in Greek.

Since the day of this important historical event, Palace Square was renamed to Syntagma Square.

The uprising was successful. In 1844, King Otto put into effect an overall liberal constitution, where all men would be able to vote. Women, however, had to wait until 1952!

Regardless of the fact that there was now a constitution, King Otto remained an oppressive monarch. In the next couple of decades, his tactics led to more tension.

Another uprising happened on 10th October 1862. Subsequently, Otto and Amalia were exiled from Greece, and King George came into power.

In 1929, the Royal Palace became home to the Hellenic Parliament. Since then, it has been hosting Parliamentary sessions. 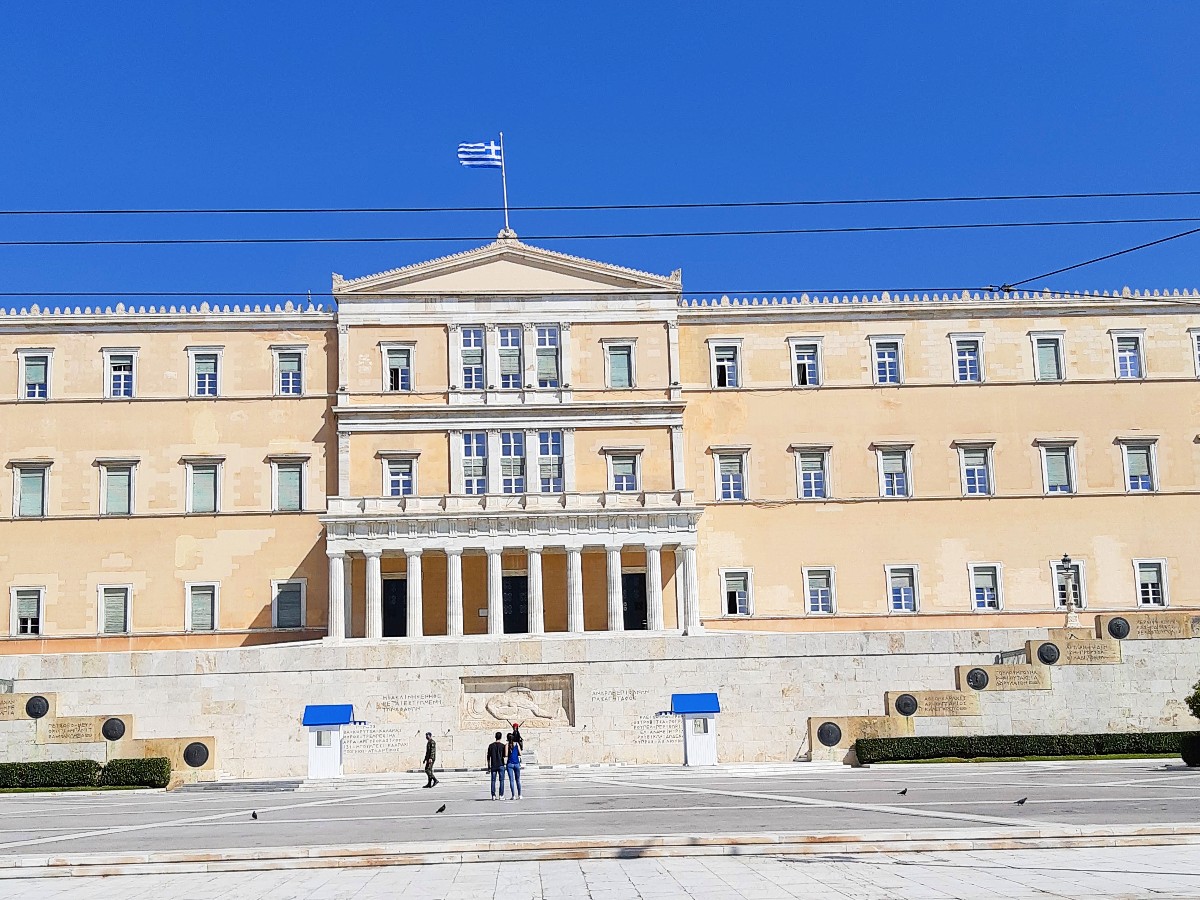 The Greek Parliament Building one of the most spectacular buildings in Athens. You probably don’t know this, but you can visit on a free guided tour! You just need to reserve in advance. For more information, check the official Hellenic Parliament website.

The Changing of the Guards on Syntagma Square

In 1929-2930, the Tomb of the Unknown Soldier was constructed right in front of the Parliament building. This Tomb is a tribute to all the soldiers who have fought dying for Greece. It’s an empty tomb, called a cenotaph. 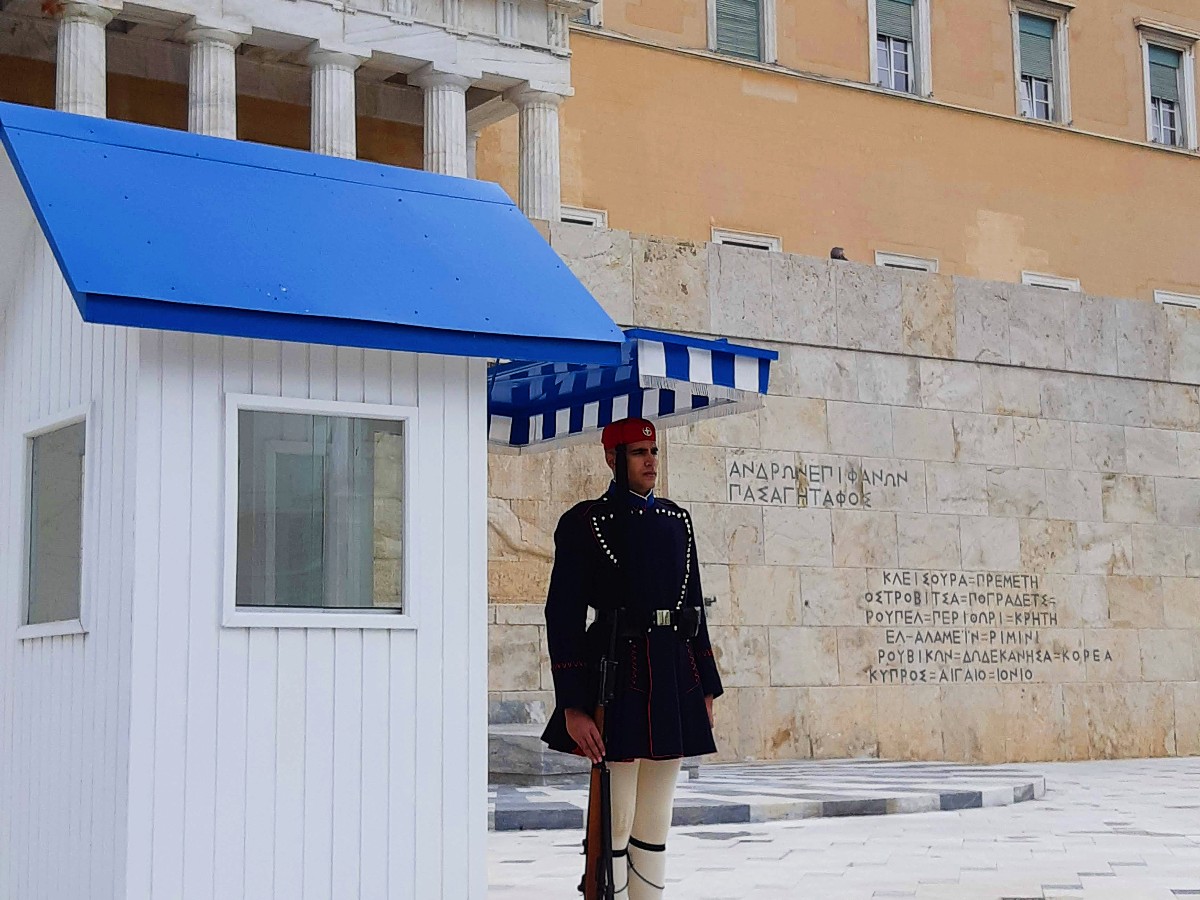 Every day, the Changing of the Guard ceremony takes place here. The members of the Presidential Guard are called Evzones and they are dressed in elaborate uniforms. They change shifts every hour, on the hour.

At 11 am on Sundays, there is a ceremonial changing of the Guards. This is a large procession on Amalias Avenue, just in front of the Parliament. 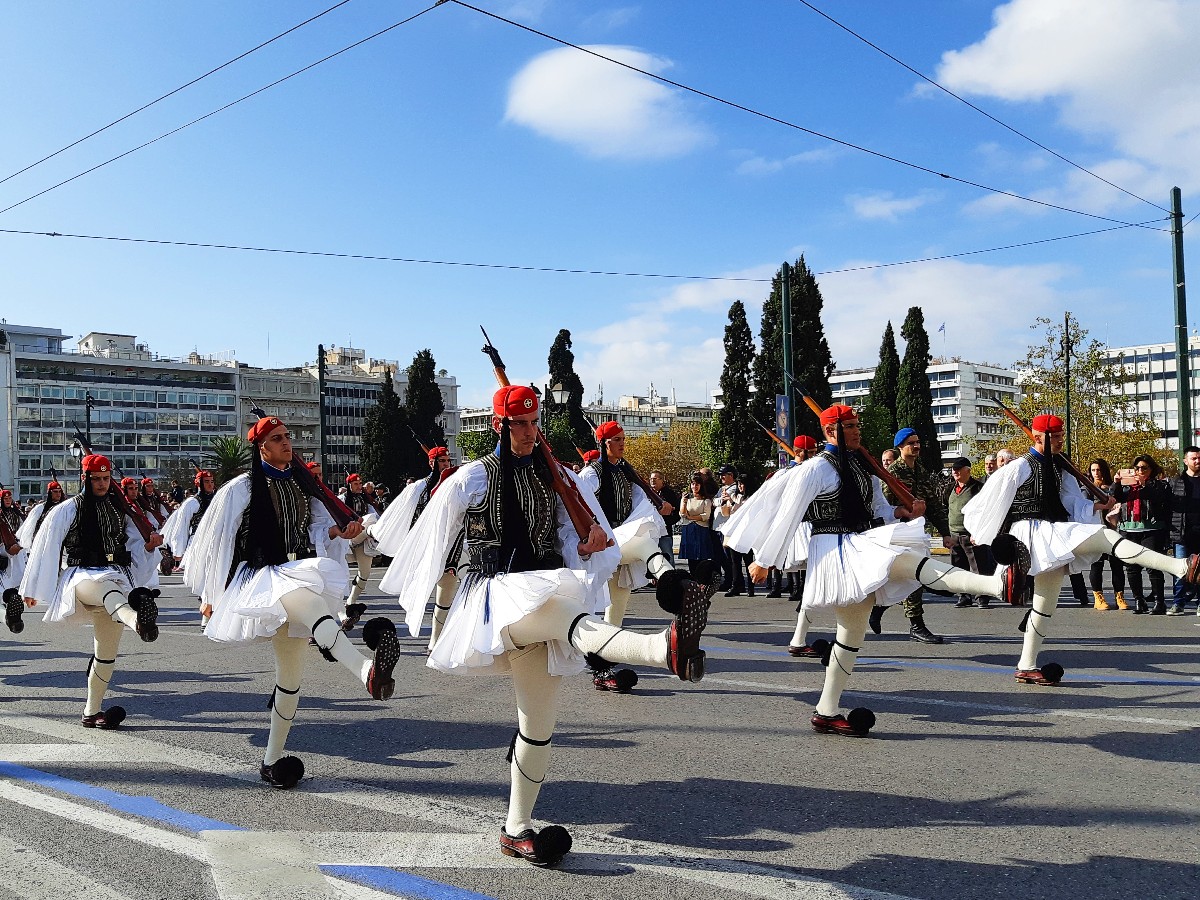 Here is some more information on this fascinating tradition: Changing of the Guards in Athens.

In 2000, Syntagma Metro Station opened to the public. It’s one of the busiest metro stations in the city, where the blue and red metro line meet. Several thousands of people stop here every day. 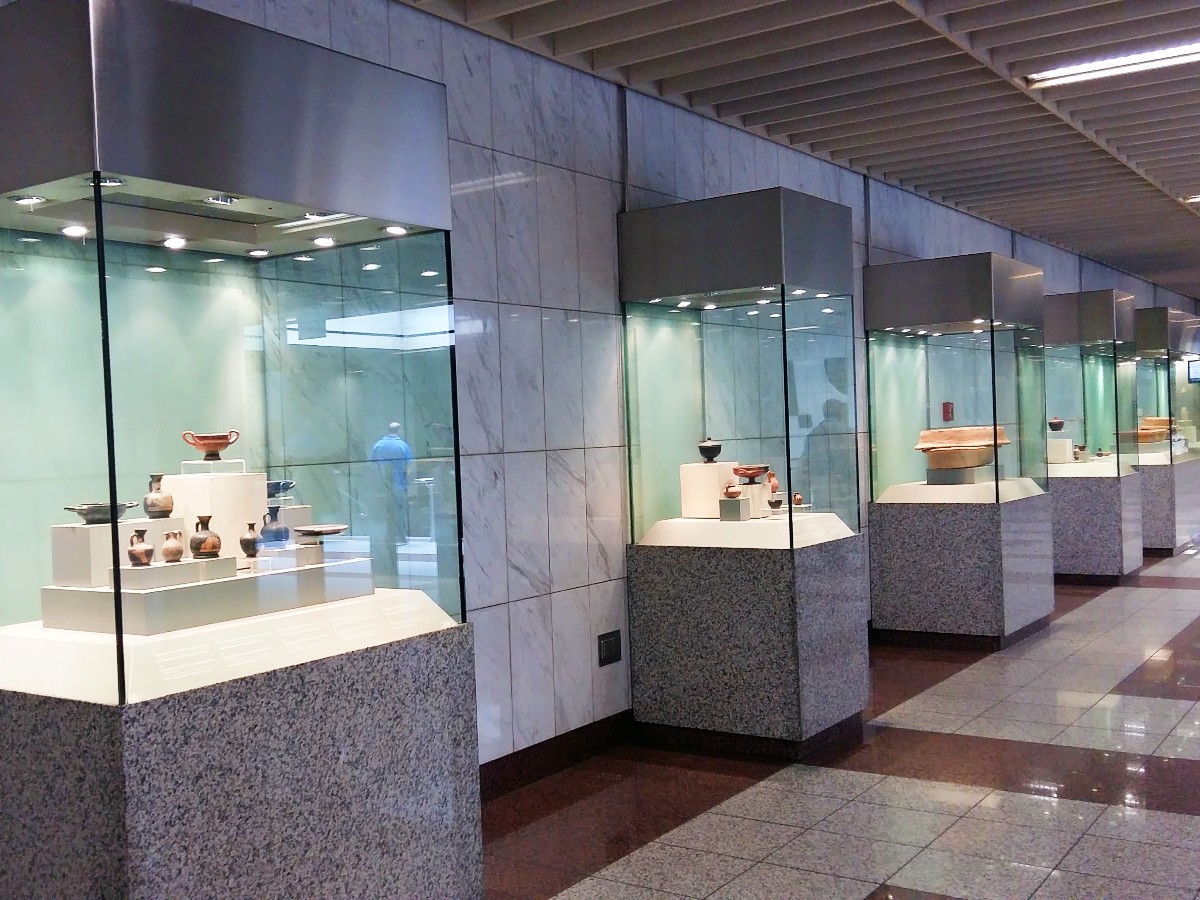 Inside the metro station, you will find an exhibition of objects that were discovered in the construction site. They are representative of Ancient Athens and Ancient Greece.

Here’s some more information on how to use the Athens metro system to get around the city.

As it’s right in the center and is so easily accessible, Syntagma Square is an easy meeting point. Thousands of Athenians pass by on a daily basis.

In 2011, Syntagma Square hosted the anti-austerity movement of Aganaktismenoi, similar to the Spanish Indignados. For several months, people who had been affected by the crisis were gathering here as a means of protest against the Greek politics. 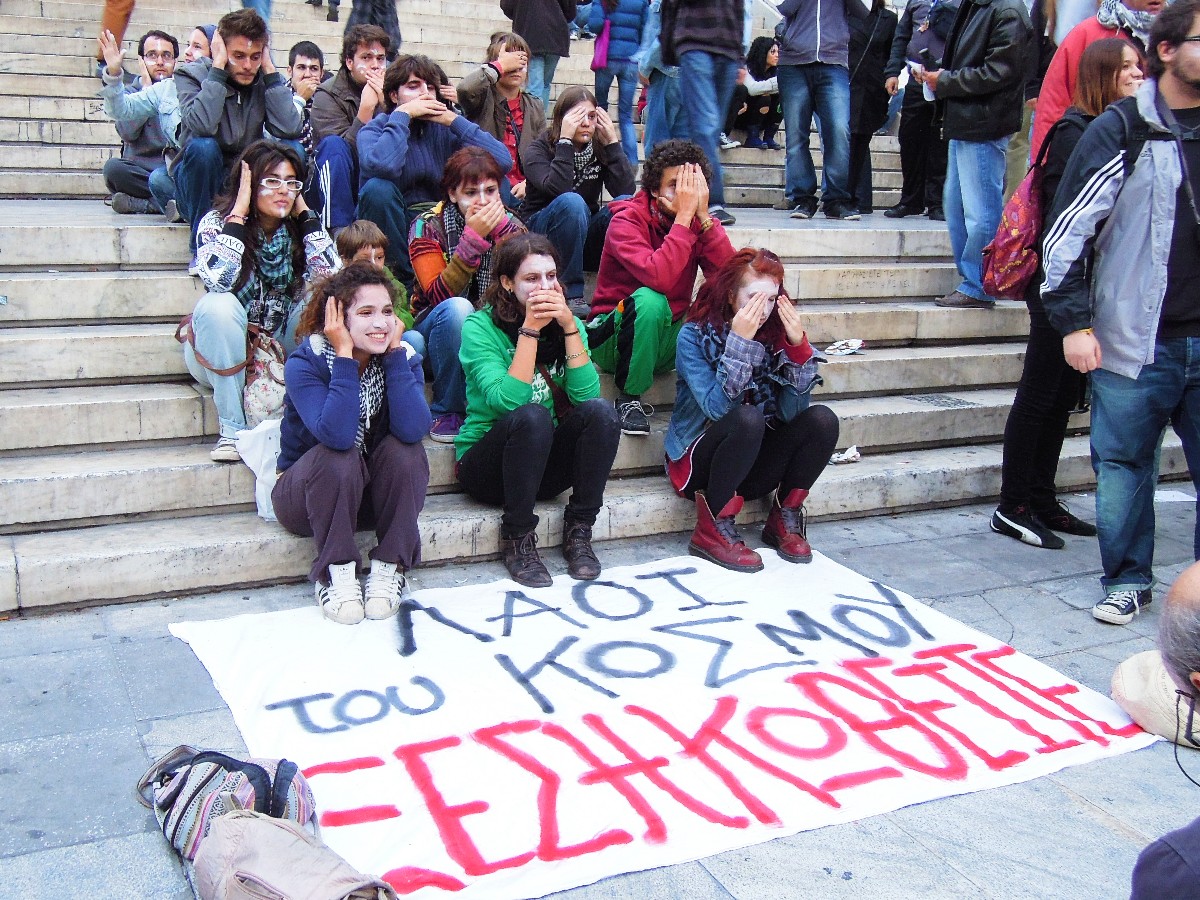 Syntagma is also a popular spot for rallies, demonstrations and events. As a result, it’s closed to the traffic every now and then, with no previous notice. This is another reason why I tend to discourage tourists from driving in central Athens!

During Christmas, a big Christmas tree brightens up Syntagma Square. Often, there are free gigs and performances to celebrate New Year’s Eve.

Like other areas in central Athens, Syntagma Square is currently being refurbished. I’m curious to see what happens when the works are over!

Right on Syntagma Square, you will see one of the most emblematic hotels in Greece, Hotel Grande Bretagne. Its rooftop bar is a fantastic place for beautiful views of Athens. 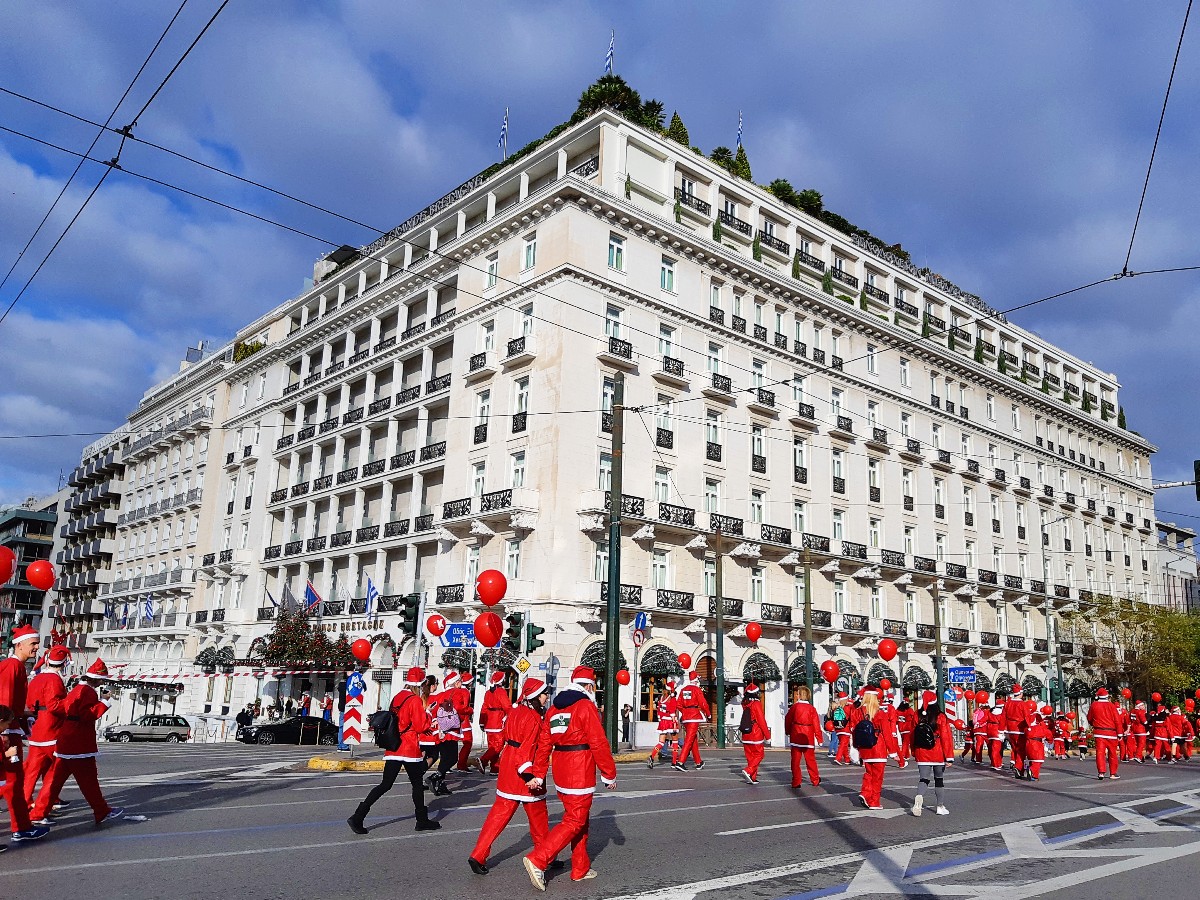 Next to the Grande Bretagne, there are two more upscale establishmens, King George and NJV Plaza. If you are looking for a luxury hotel in the heart of the city, you can’t go wrong with either of them!

On the other side of the square, there are a couple of ministries and other public buildings, that are nowhere near as elegant 🙂

Right on Syntagma Square, on Karageorgi Servias Street, you will see a large, central building, called Public bookstore. It’s a popular book and technology store, spread out on several floors. 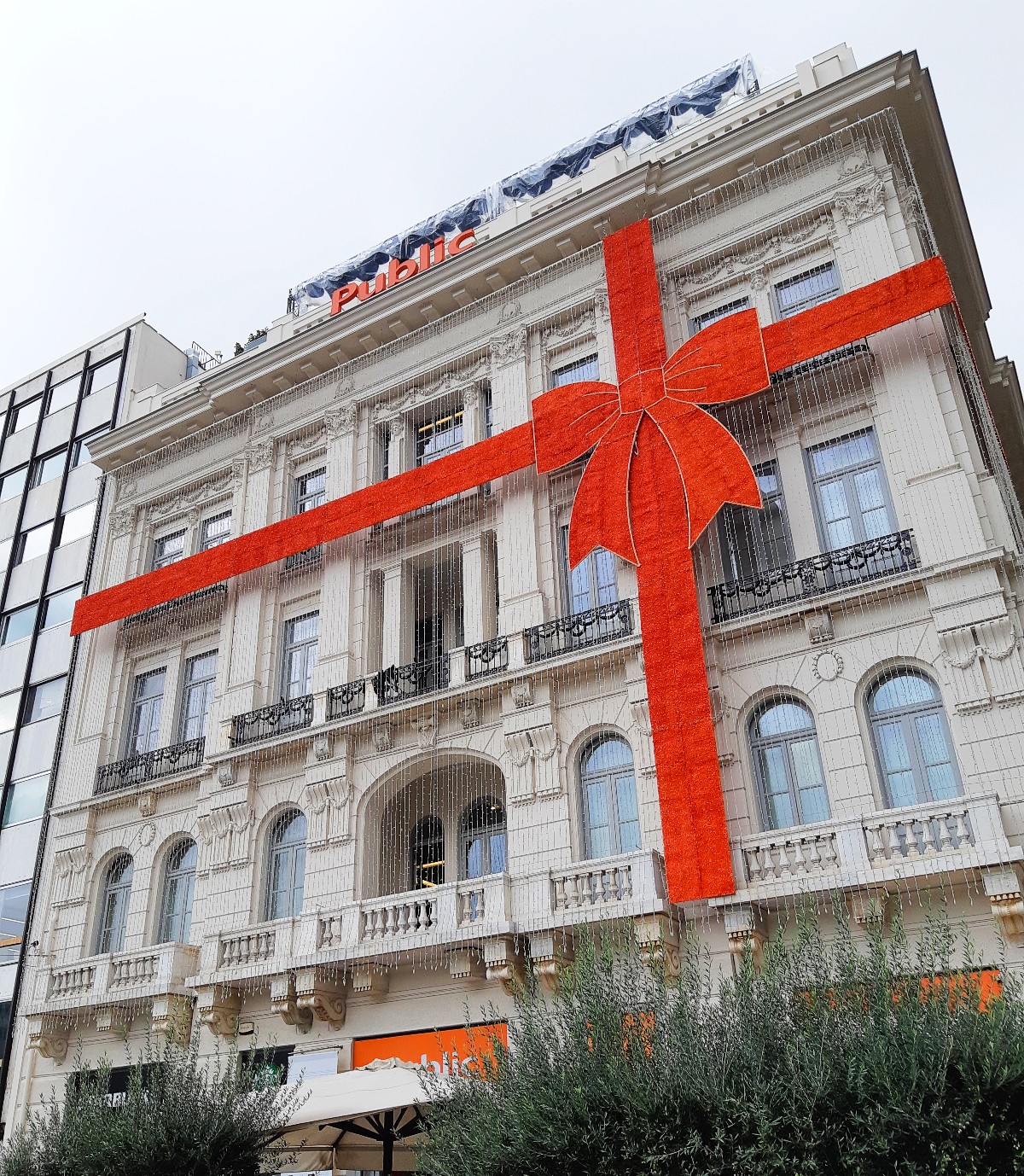 Beginning just across the square, you will see a pedestrian street called Ermou Street. This is one of the main shopping streets in central Athens, with several popular retail stores. The side streets are full of shops selling all sorts of stuff.

Ermou Street passes by Monastiraki Square, close to Plaka, the Roman Agora and Psiri neighborhood. It then continues all the way to Kerameikos.

You will find dozens of cafes, restaurants and bars located close to Syntagma Square. Many of them are on Mitropoleos Street, and the various nearby alleys.

Voulis street and Nikis street are also good places to go for a meal or drink. If you are into wine, check out the nice wine bars in the area, like Oinoscent, Wine Story and Kiki de Grece.

Syntagma Square is one of the main stops for the hop-on / hop-off bus in Athens. These buses offer free wifi and commentaries in several languages, so you can learn more about the areas you are visiting. 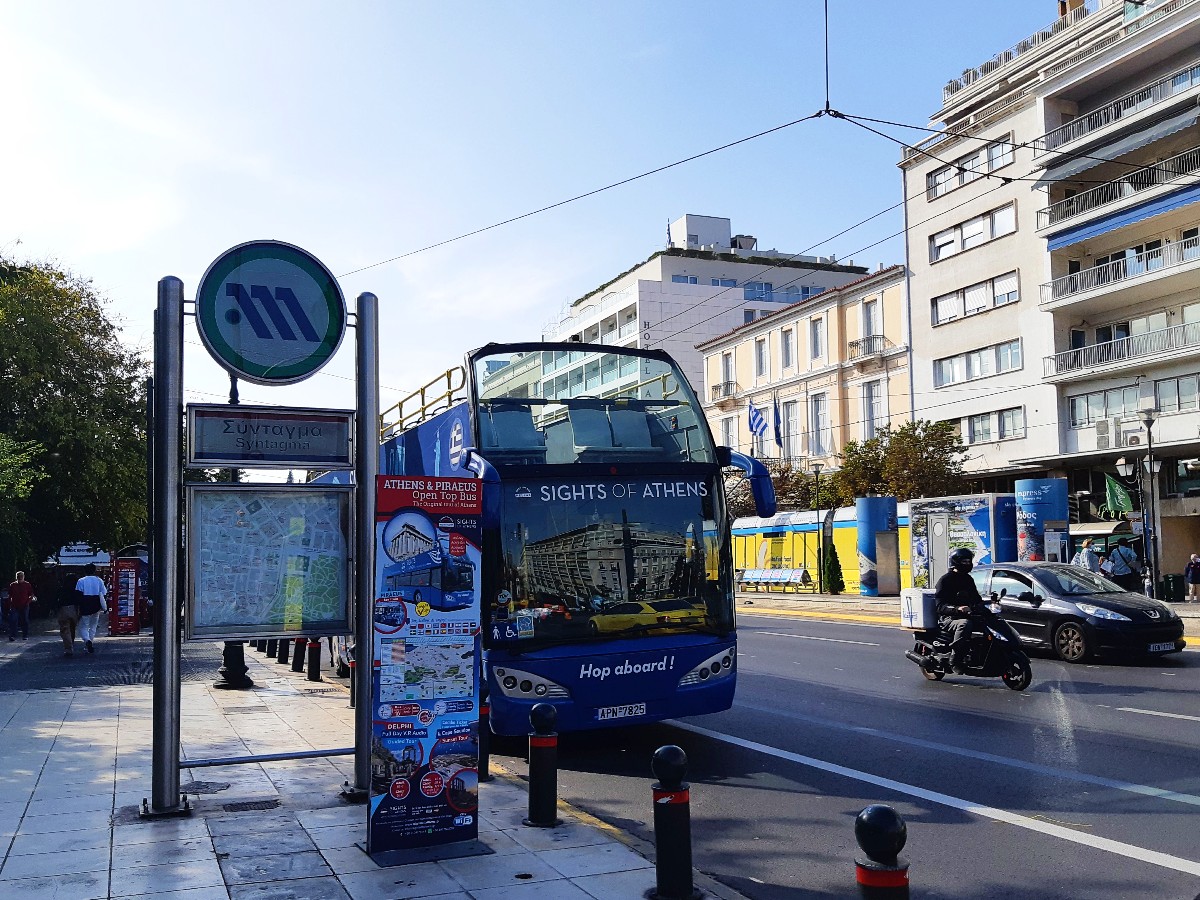 This is a fun and affordable way to see the city and some of the suburbs, plus you get a couple of free walking tours during the high season.

Here are some answers to some frequently asked questions:

Where is the Syntagma Square?

Syntagma Square is right in the center of Athens, close to the Acropolis, Plaka and Monastiraki.

Why is the Syntagma Square important?

Syntagma Square is the most important square of Athens. It is a popular meeting place, close to some of the main shopping streets in the center, and also a common place for demonstrations and gatherings.

How far is Athens Airport from Syntagma Square?

The Athens airport is 32 km (20 miles) from Syntagma Square. The metro usually takes about 40 minutes, whereas a taxi ride can take anywhere from 30 – 60 minutes.

How much is a taxi from Syntagma Square to Piraeus?

A taxi from Syntagma Square to Piraeus port should cost around 12-14 euro. The exact cost would depend on traffic and time of the day.

How far is it to walk to the Acropolis from Syntagma Square?

The Acropolis is about 1.3 kms (0.8 miles) from Syntagma Square. You can walk through Plaka, which is the oldest neighborhood in Athens.

Hi! I’m Vanessa from Athens. If you have any questions about Syntagma Square – or any place in Athens – leave a comment down below! Follow my FB page for more articles and news about Greece 🙂