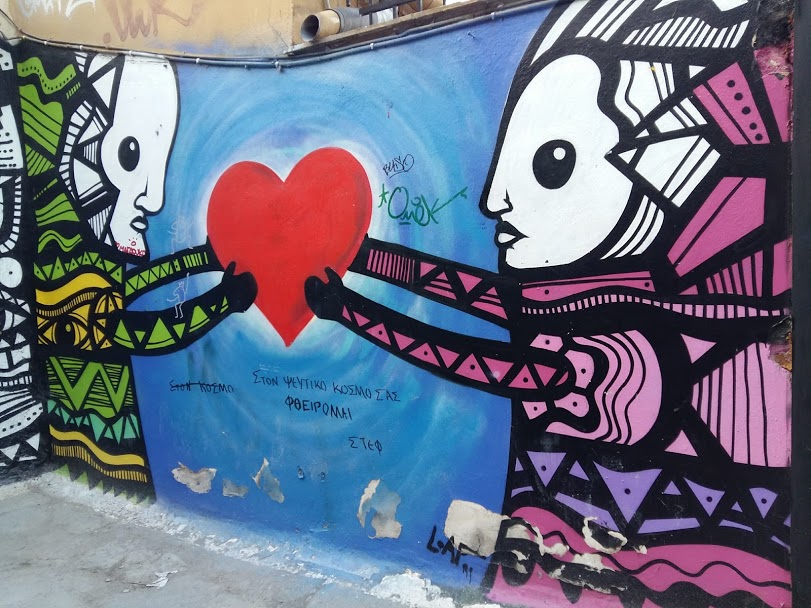 A local’s guide to Anafiotika in Athens Greece. Discover a hidden island neighborhood under the Acropolis you never knew existed!

What is Anafiotika in Athens

Anafiotika is a tiny neighborhood in Athens, squeezed between the Acropolis Hill and Plaka. Its architecture resembles the Cycladic islands, with the narrow streets and white-washed houses with colorful shutters. 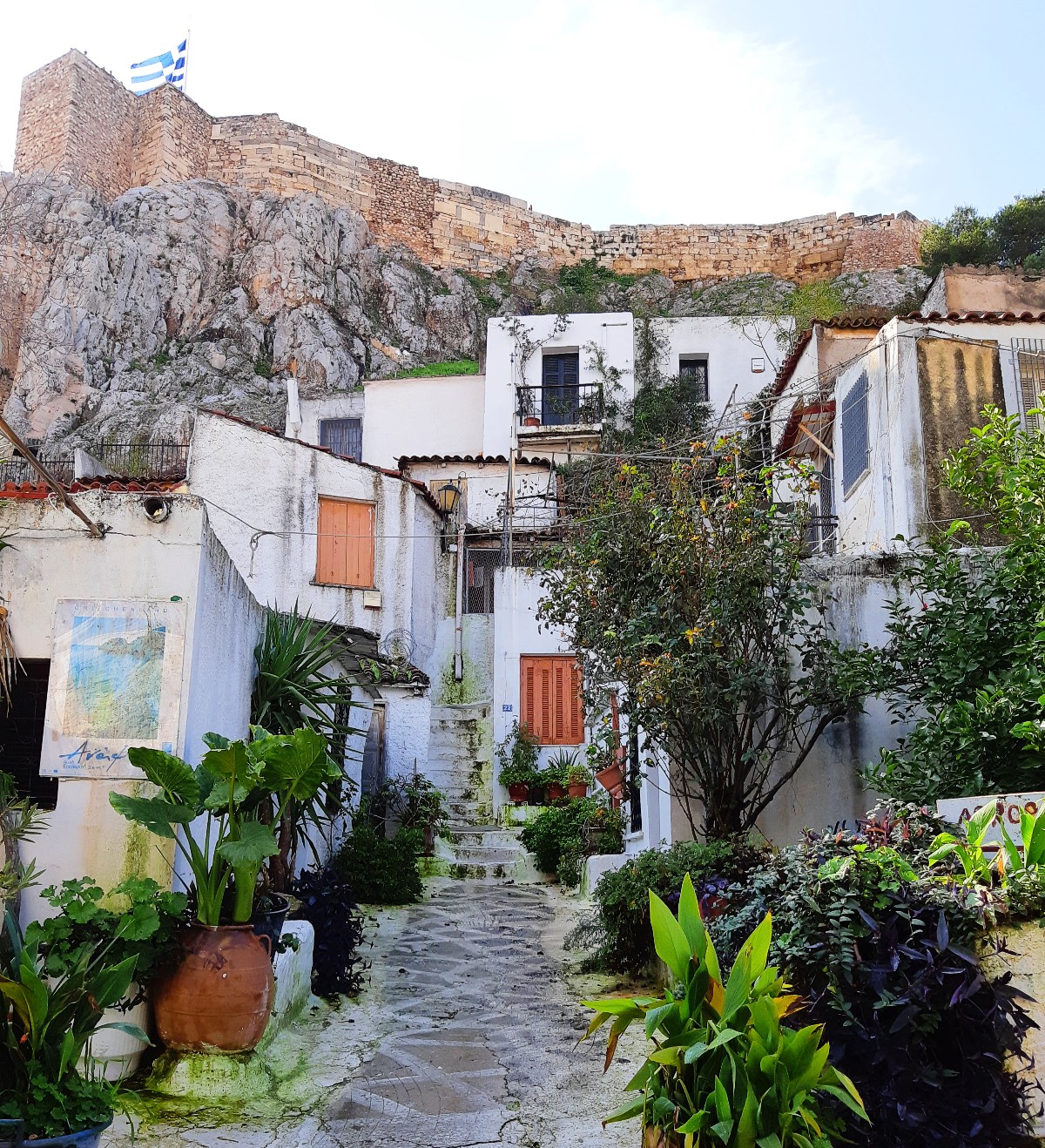 The small neighborhood consists of 45 small, cubic houses, perched just below the north slope of the Acropolis. There are also a few quaint churches, bougainvillea trees, and hundreds of steps.

Most of the Anafiotika houses are under 40 sq. metres, and are inhabited. Many of the residents are retired, and have been living there since they were born.

What to do in Anafiotika Plaka

The small neighborhood is a unique attraction in the bustling metropolis. Stroll around the narrow passageways and take in the house details and the wonderful views of Athens and Lycabettus Hill.

As you are exploring, you will see some street art, which is so typical of the Greek capital. You will also come across staircases which look like a dead end. Try them – they might lead you somewhere new! 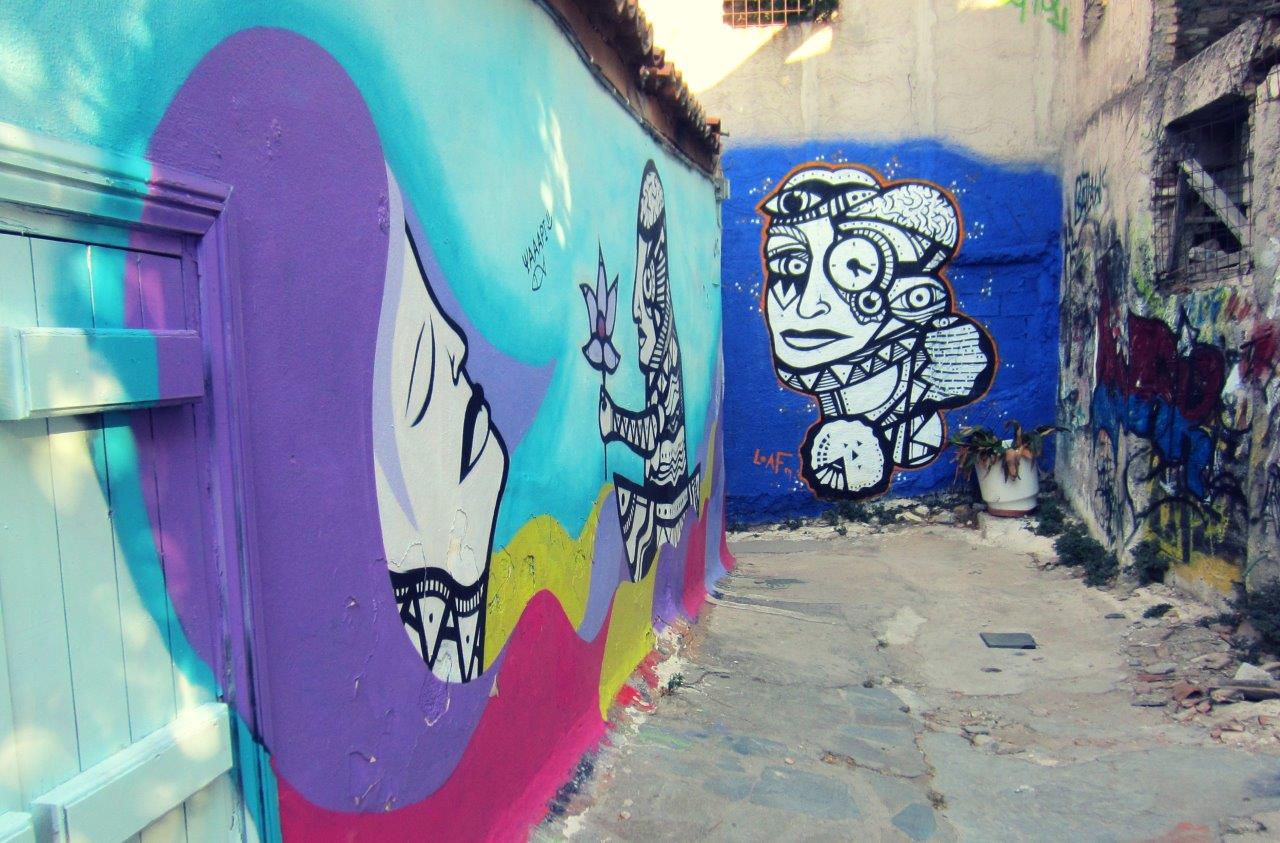 As you are walking around, please remember that people live here and respect their privacy. This is one of the most photographed neighborhoods in Athens, and it can be exhausting for the residents.

How to get to Anafiotika on the Acropolis Hill

My favourite route to get to Anafiotika begins right under the Acropolis rock. Walk up Thrasillou street, which is located opposite the Acropolis Museum, and continue straight to Stratonos street.

On your left hand side, you will see a set of steps and a discreet marble plaque, with a writing in Greek. This is a tribute to a 17-year-old Greek guy, Konstantinos Koukidis. 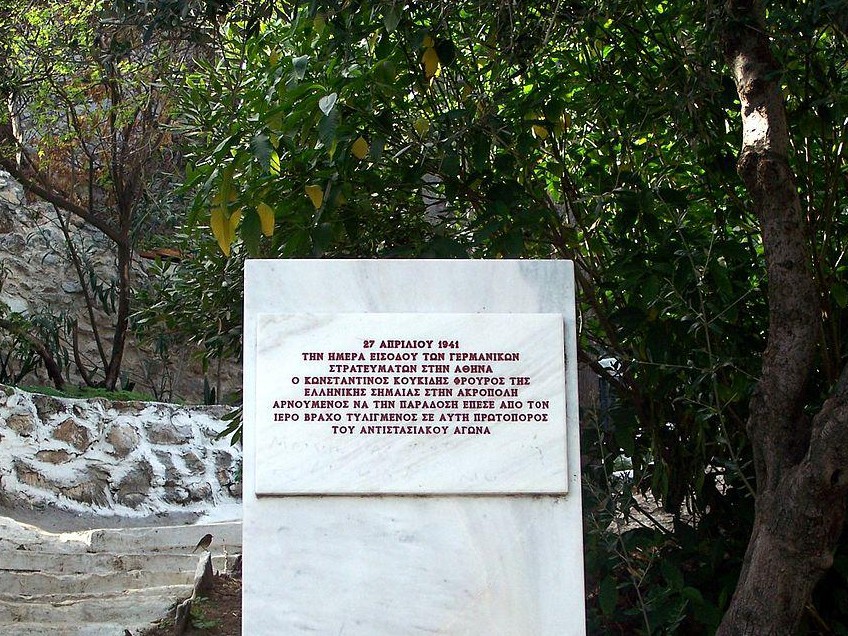 On 27 April 1941, after the Germans invaded Athens, they replaced the Greek flag, which was up on the Acropolis, with a Swastika flag. Koukidis, not wanting to let the invaders humiliate the Greek symbol, wrapped it around his body and jumped off the rock at that exact spot.

Climb the steps next to the plaque, and you will find yourself right on a Greek island! Note that the steps are uneven and may be slippery.

Once you’ve visited Anafiotika, wander down to busy Plaka neighborhood. Here, you can check out the souvenir shops, and enjoy a coffee or meal. Or you can head to one of the rooftop cafes on the bustling Monastiraki square.

I’m sure you are now wondering why the Anafiotika houses look like the blue and white Cycladic houses 🙂 Read on to find out!

In ancient times, the Delphi Oracle had prohibited people from building houses in the area under the Acropolis rock. However, some houses existed since the 5th century BC. They were occupied by refugees, who resettled here after the Peloponnesian War. 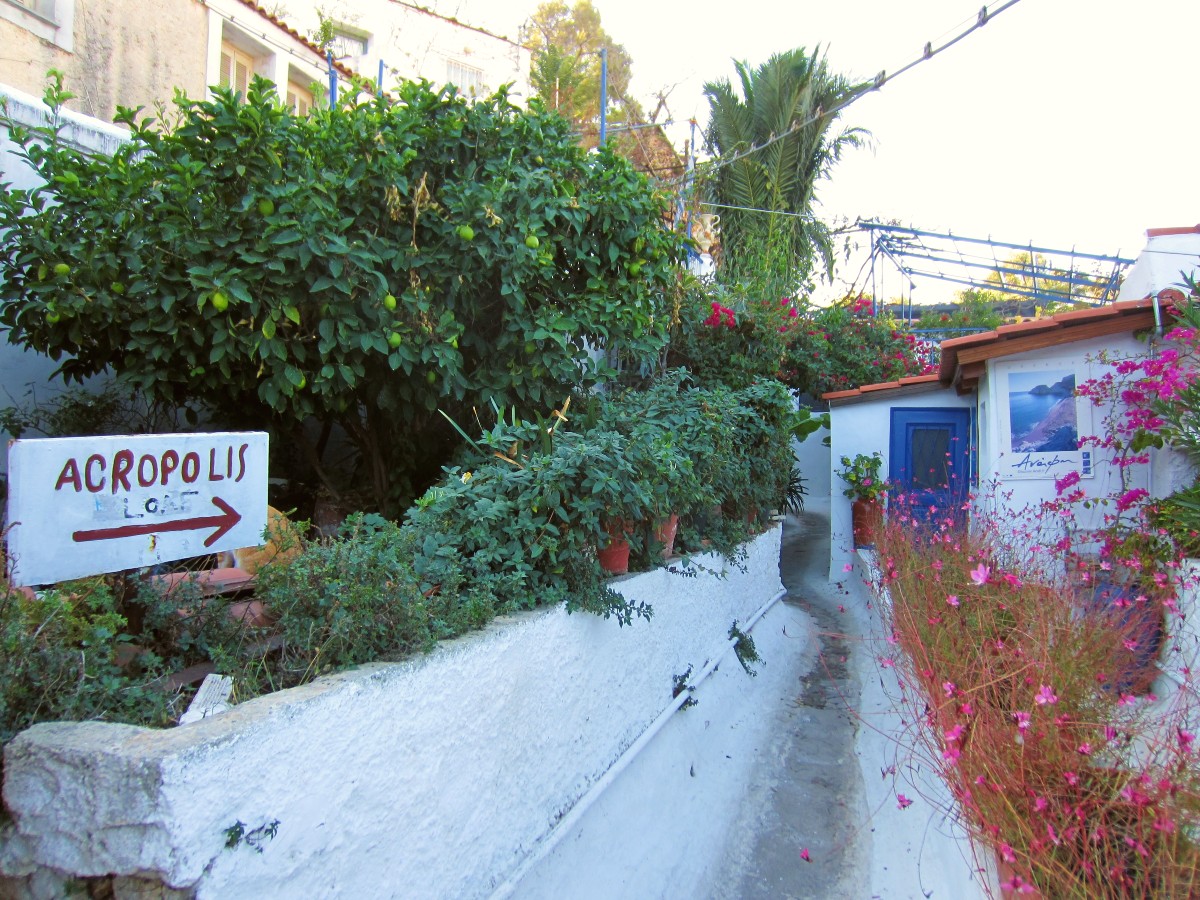 There is little information about the area during the Roman Era or Middle Ages. Two small churches, Agios Georgios tou Vrachou (St George of the Rock) and Agios Symeon, were built in the 18th century.

In 1821, after the Independence War against the Ottoman Empire, Greece was liberated. Athens became the capital of the newly founded Greek state in 1834, and the Bavarian Prince Otto was appointed King.

Hans Christian Andersen, the famous Danish author, painted a picture of Athens in the early 1840s. He mentioned a handful of slaves from Africa, who lived in small clay houses in the area. You can find out more in his book “A poet’s bazaar”.

At that time, King Otto encouraged workers from the Cyclades islands to come and live in Athens. The islanders were famous for their construction skills, and they would help rebuild King Otto’s palace and the new capital of Greece.

The Cyclades are one of the many island groups in Greece. Some of the best known Cycladic islands are Santorini, Mykonos, Paros, Naxos, Milos and Tinos. Many of the skilled workers came from the small Cycladic island of Anafi, and were called “Anafiotes”. 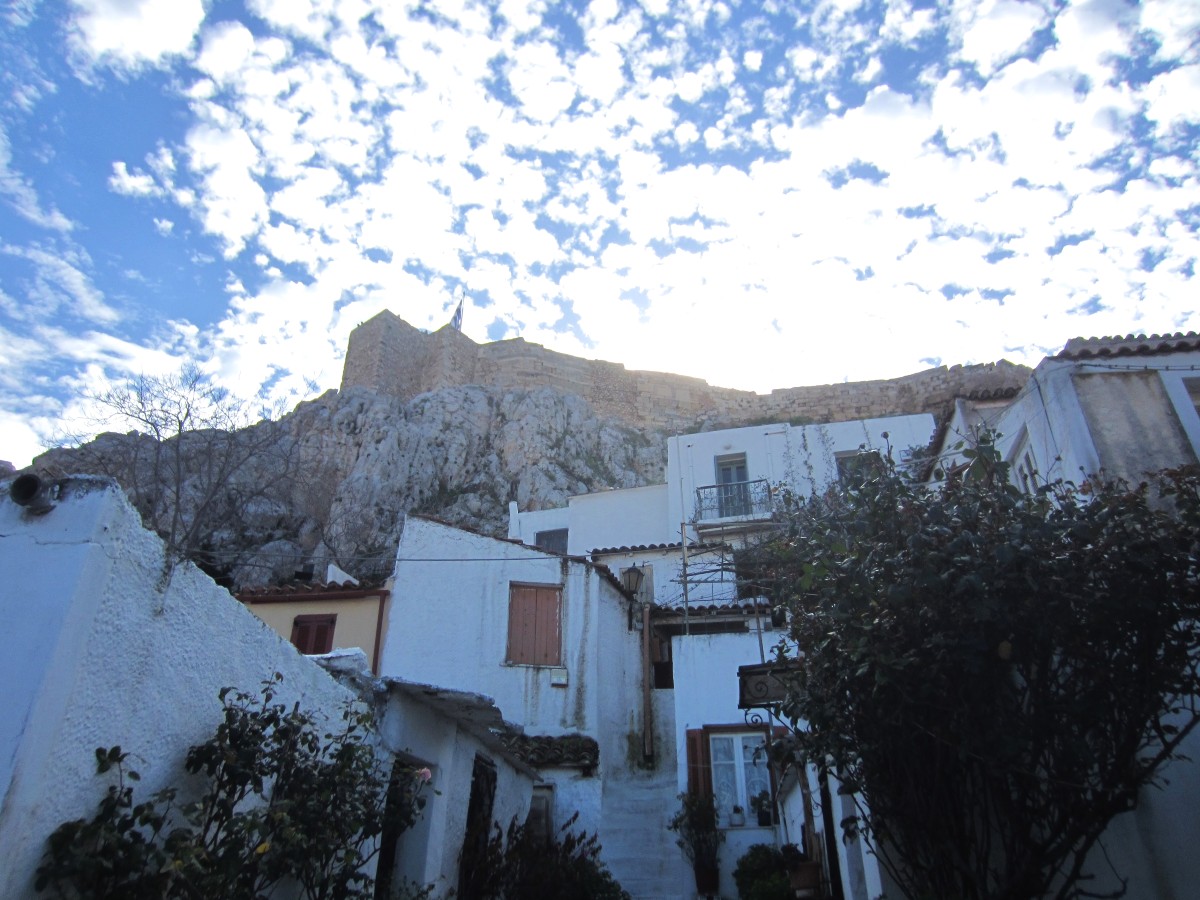 The newcomers decided to build their own houses on the rocky terrain located at the foot of the Acropolis. The slope looked similar to Anafi island, which is rocky and arid, and reminded them of their homeland.

At the time, an Ottoman law was in place, stating that any building constructed from sunset to sunrise would belong to the builder. Taking advantage of this decree, the Anafiotes worked on their new homes during the night and built the neoclassical houses in Athens during the day.

Allegedly, King Otto had given them permission to build their own houses, though no written documents exist. In any case, the authorities did not interfere with the construction of the Little Anafi houses. Skilled workers were necessary for Athens, even if they built their own houses illegally. 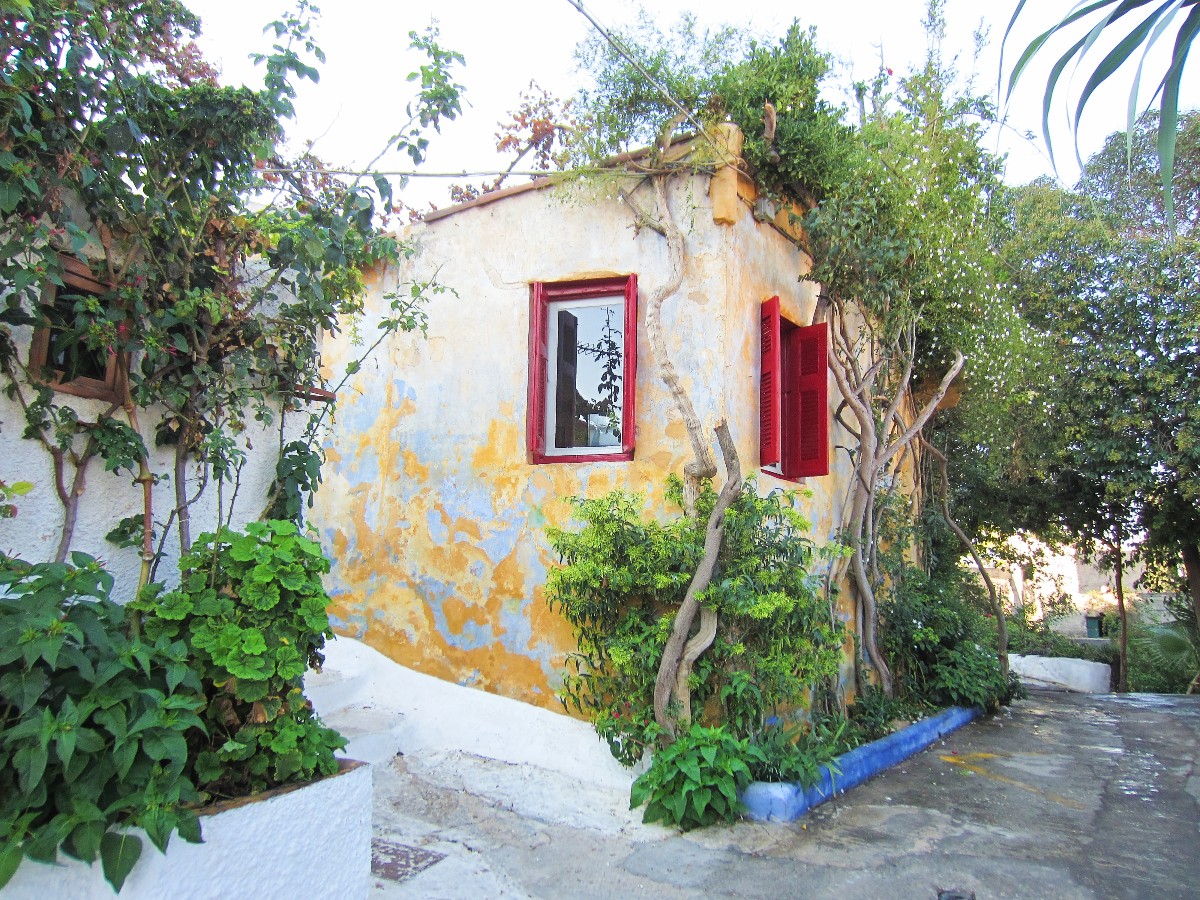 The Anafiotes built their island village around the two small 18th-century churches, Saint George and Saint Symeon, which they restored. The churches are still there today, and masses happen on special days of the year.

Living in the narrow streets of Anafiotika Athens

As all the newcomers were construction workers, there was professional and social cohesion in the small settlement. The residents spent most of their time on their porches and yards, rather than inside their homes. 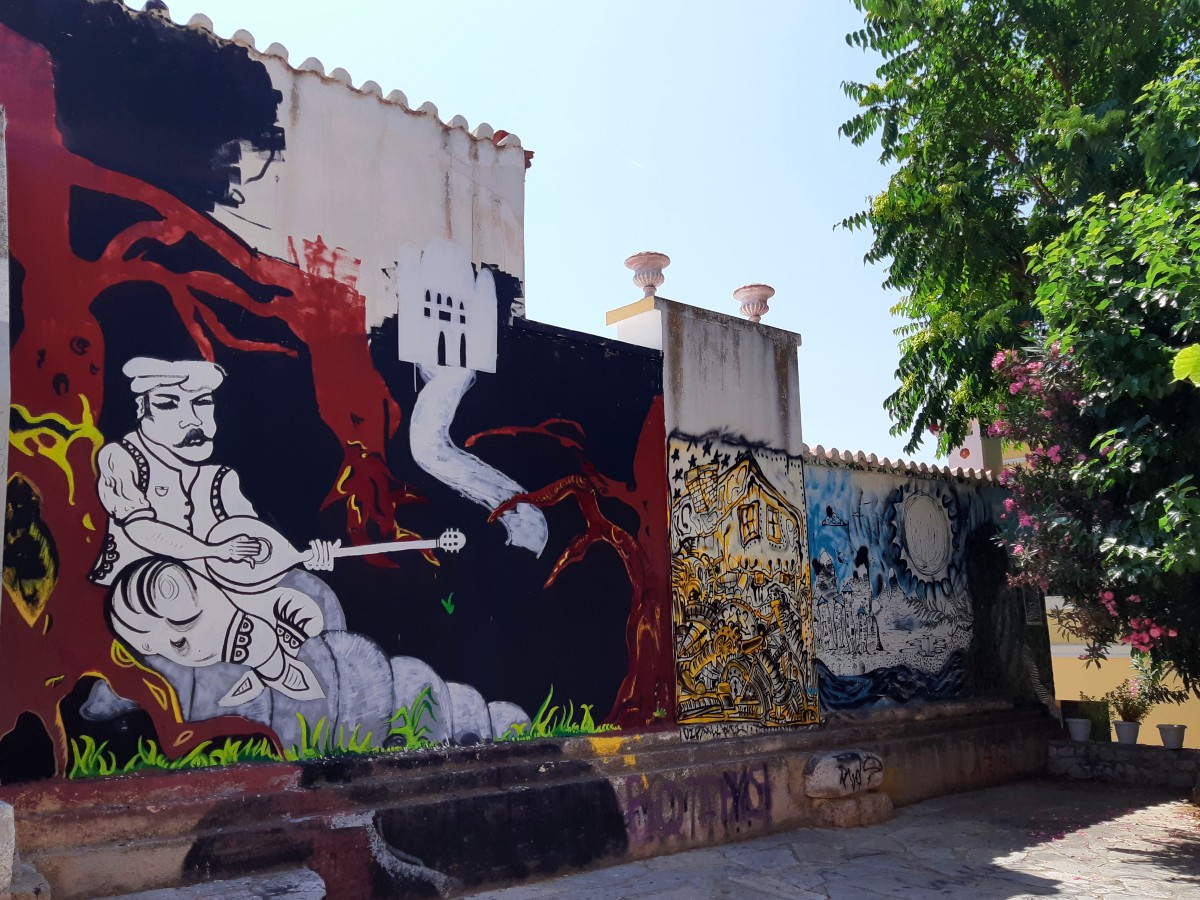 Women spent time together, looking after the children and doing household chores. Men went home from work in the evenings and discussed politics while smoking their cigarettes.

Everyone living in Anafiotika knew exactly what was happening in their compact neighborhood. This is something you can still see in Greece today, especially if you visit some of the quieter Greek islands.

Who do the Anafiotika houses belong to?

It seems that no written planning permission ever existed for these small houses. They never officially belonged to anyone, and were never exactly legal.

In fact, even today, there is very little paperwork associated with them. 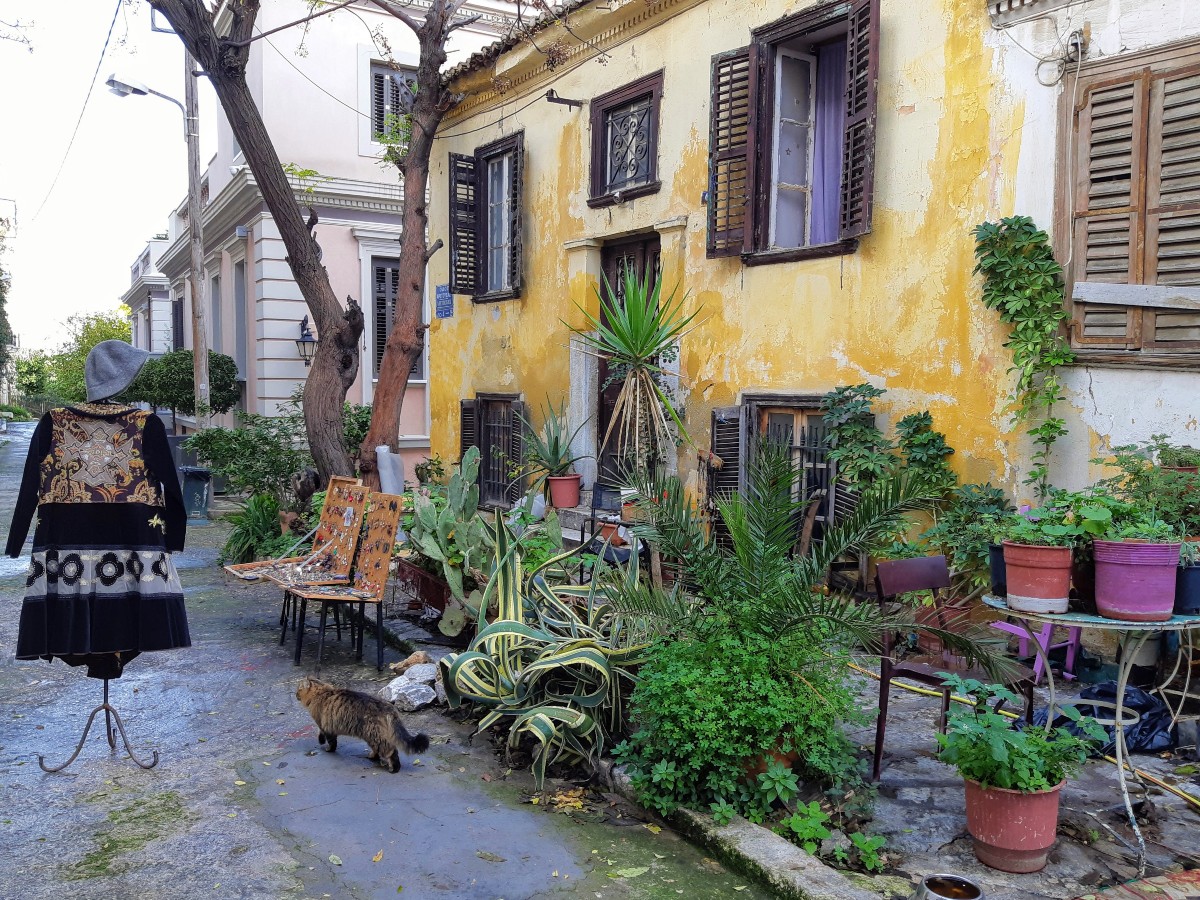 In the decades that followed, the residents faced the reactions of groups of scholars and academics. Archaeologists kept discovering ancient Greek ruins during archaeological excavations, and they were re-evaluating contemporary buildings.

As a result, the construction of the Anafiotika settlement was considered desecration of the sacred archaeological site of the Acropolis.

In 1872 a decree was issued, describing Anafiotika as an illegal settlement, and its inhabitants as trespassers. However, given the social and financial difficulties of the times, no measures were taken, and the neighbourhood lived on. 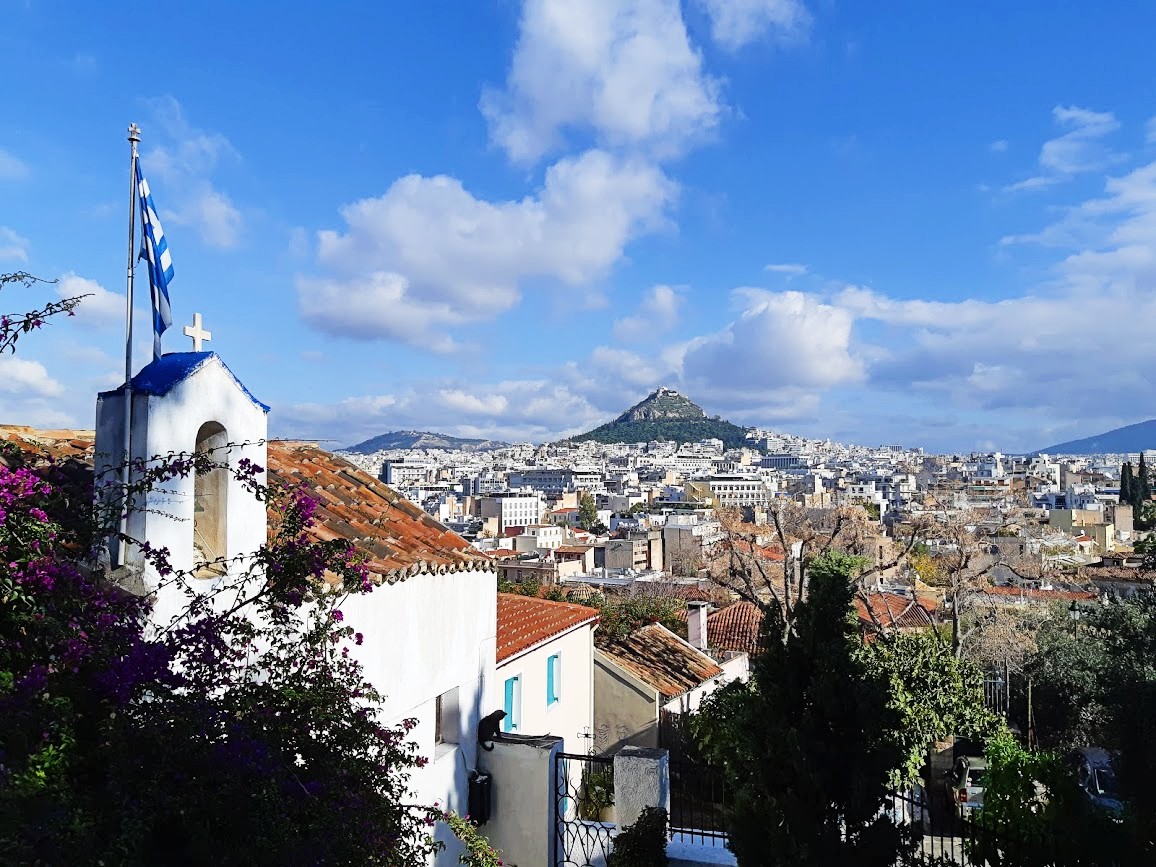 Not much changed in the next decades. In 1922, after the population exchange between Greece and Turkey, many refugees came to Athens from Asia Minor. Some of them settled next to the Anafiotika area.

Some of the Anafiotika houses were demolished!

A decade later, in the 1930s, the American School of Classical Studies bought some of the Anafiotika houses. In an attempt to unearth ancient ruins, they demolished a few of them, as had happened during the excavations of the Ancient Agora.

At the time, some of the archaeologists working in excavations stayed in the iconic houses. Must have been a unique place to stay! 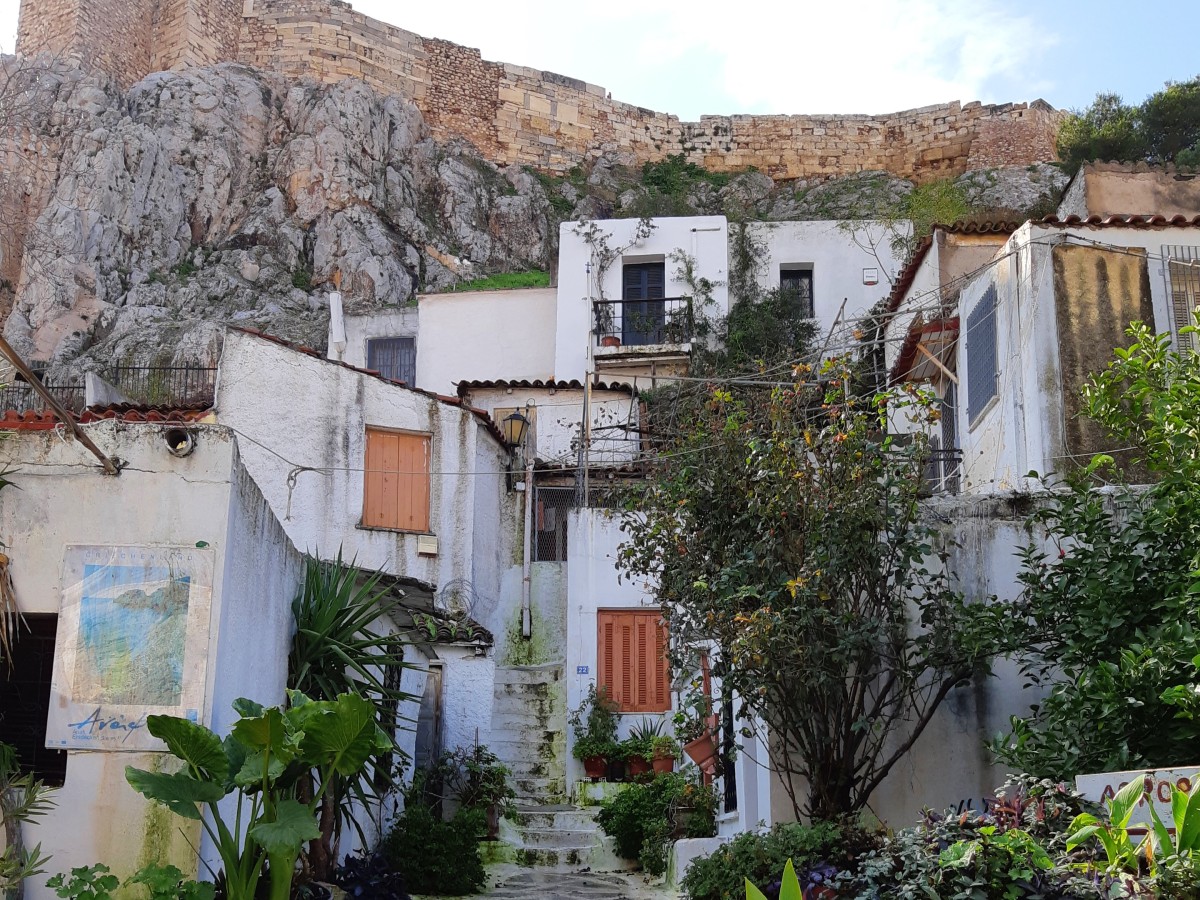 In the late 1960s, the Ephorate of the Acropolis brought up the Anafiotika houses ownership issue. The authorities decided to expropriate an area of ​​around 2,500 sq. meters, in order to restore the ancient promenade around the Acropolis.

Unsurprisingly, there was a lot of reaction. Several groups of people, including architects, civil engineers and the residents, were against the decision.

One of their arguments was that the Anafiotika settlement was already over 100 years old, so it had historical value in itself. Additionally, an expropriation would mean that residents would be made homeless.

Eventually, the parties involved reached a compromise, and agreed to only demolish 7 houses, located very close to the Acropolis. Part of the area was reconstructed in 1979, allowing the restoration of the ancient promenade.

If you walk on the Acropolis promenade today, you can still see ruins of these houses .

Living conditions have improved considerably since the 1980s. Still, the only way to come here is on foot, through the tiny, steep staircases.

The residents care a lot about their neighbourhood. You will notice that the houses are whitewashed, and there are plants everywhere. There are also many lazy Greek cats! 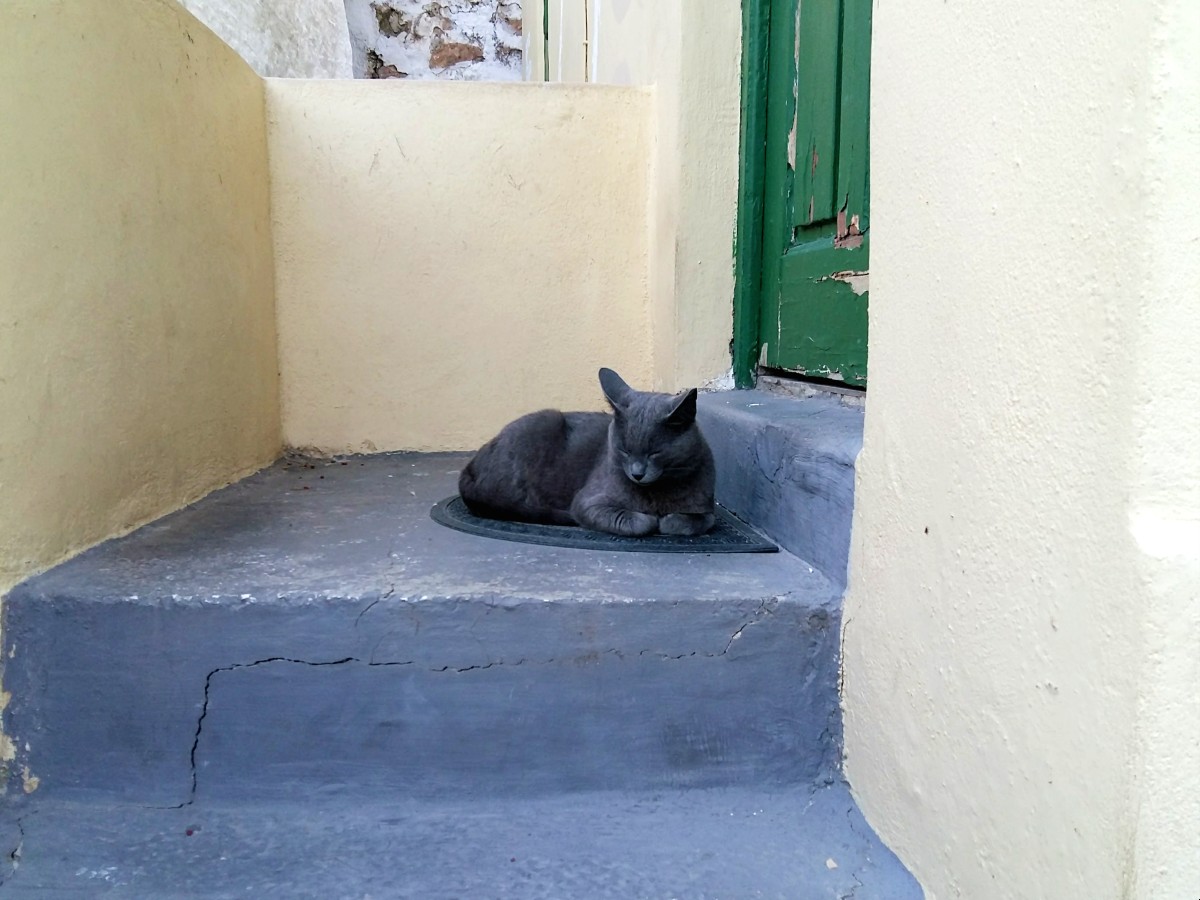 Since there are no official papers, the iconic houses cannot legally be passed on to third parties. As a result, a few of them are abandoned. It’s unclear what their future will be…

Here are some questions that many tourists come up with:

Where is Anafiotika meighborhood in Athens?

Anafiotika is a small neighborhood nestled beneath the north slope of the Acropolis in central Athens. The original houses date from the 1840s.

How do you get to Anafiotika?

The only way to get to this quaint area is on foot. There are many steps if you want to go all the way to the top, but it’s totally worth it when you are visiting Athens!

What is so special about Anafiotika Athens?

The Anafiotika houses were modeled after the houses on Anafi island and other Cycladic islands. The neighbourhood looks like a Greek village, and is a tranquil oasis right in the middle of the bustling capital.

Where does the name Anafiotika come from?

The original settlers in the area came from the small Cycladic island of Anafi, hence the name.

Are there any Byzantine churches in Anafiotika?

There are two churches in Anafiotika, which were built during the Ottoman Era: Saint George, and Saint Symeon. 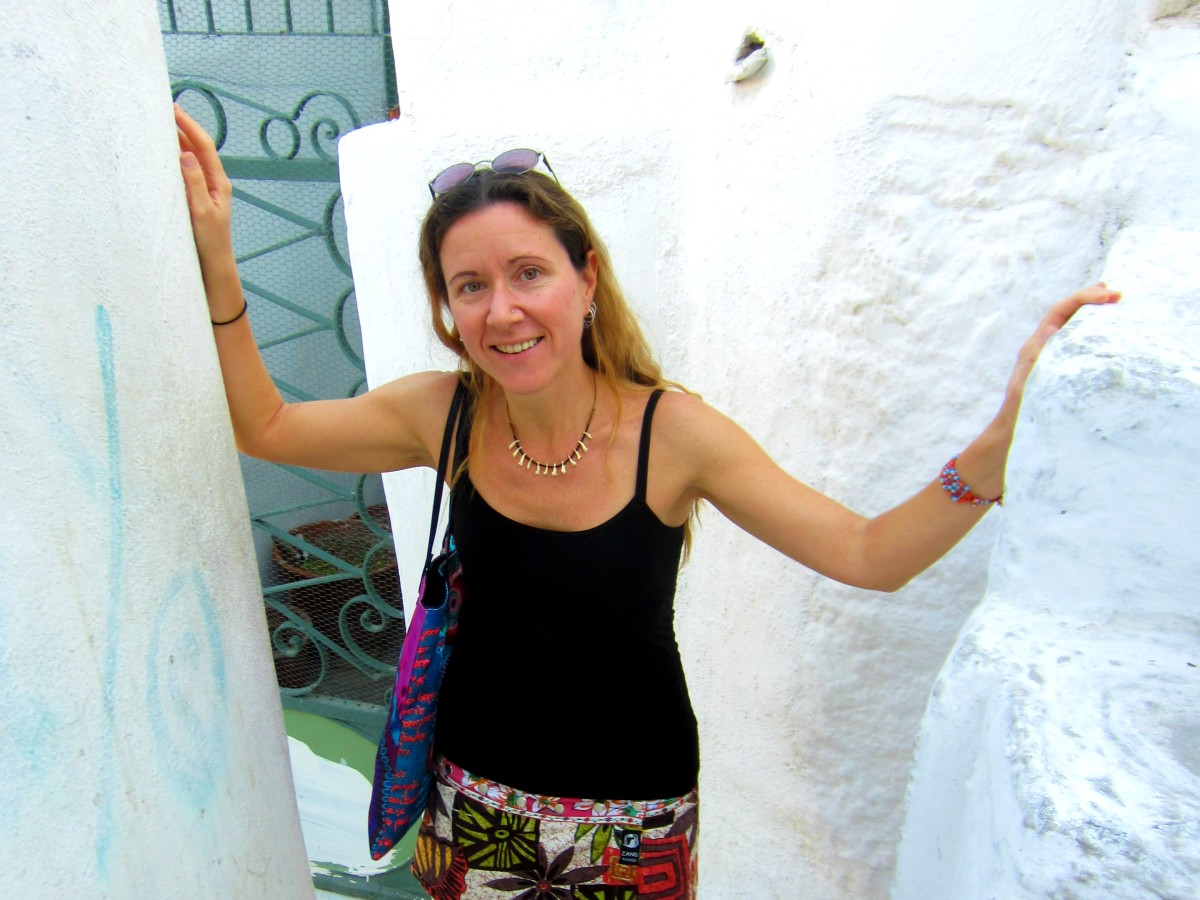 I hope that you’ve enjoyed reading a few things about the Anafiotika neighborhood in Athens. If you have been there, please leave a comment below and let me know what you thought!

Hi! My name is Vanessa, and I love helping people discover more about Greece. I was born in Athens and love my vibrant city, with all its bustling neighbourhoods. The iconic little area of Anafiotika is particularly charming. When you visit Athens, make sure you check it out! 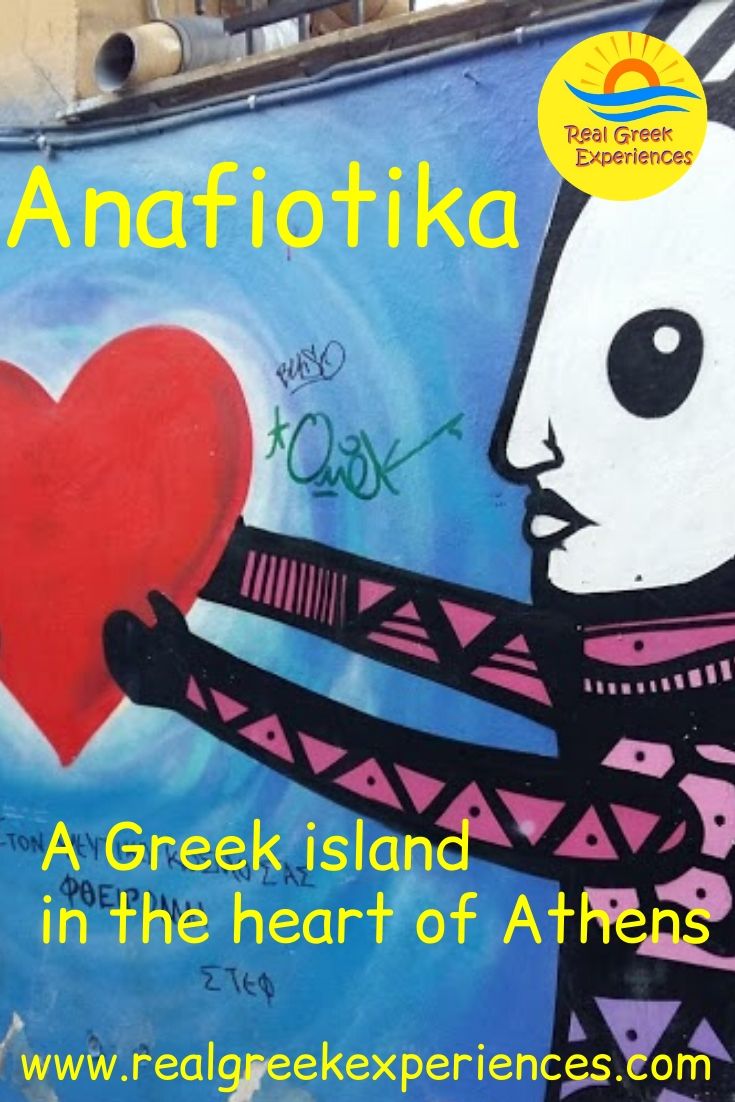