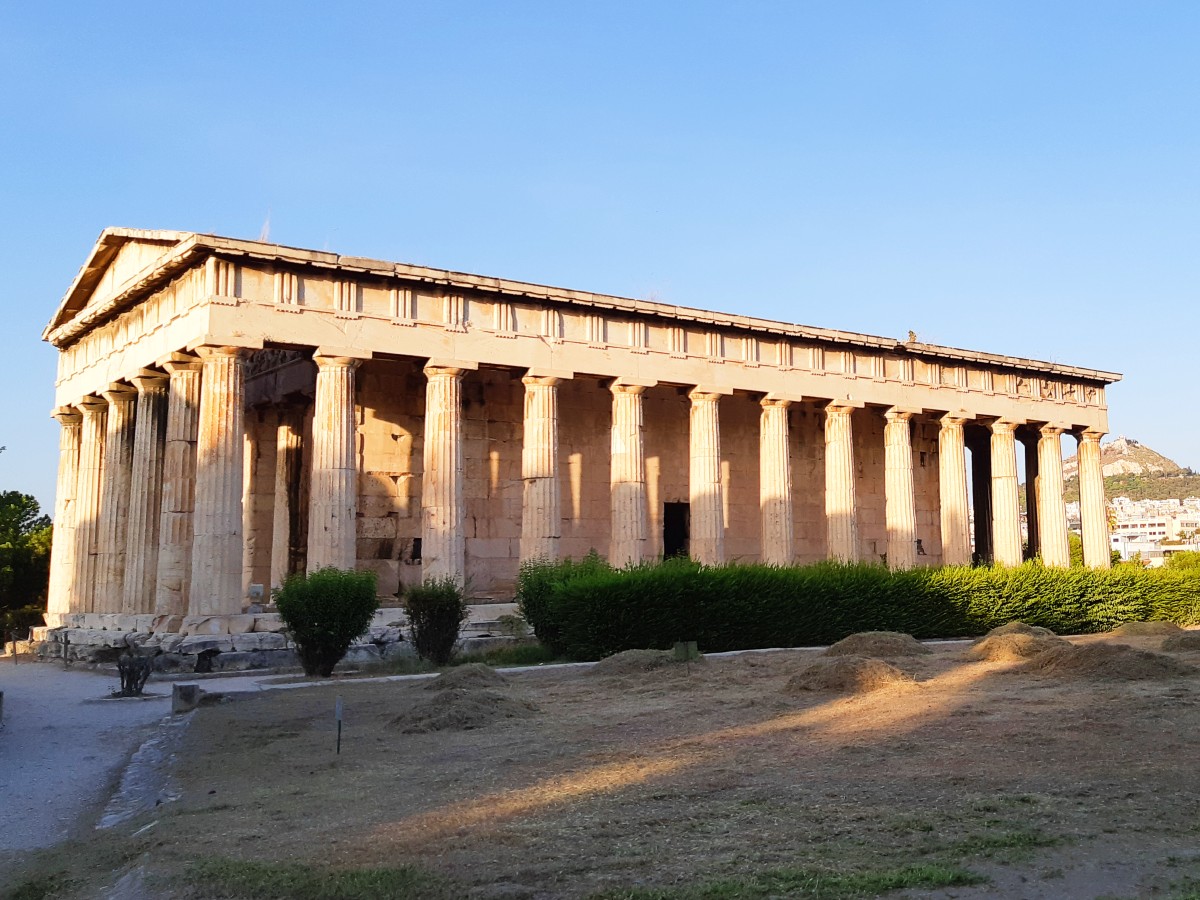 The Ancient Agora of Athens was one of ancient Greece’s most significant public spaces. Today, it’s a popular tourist attraction. Here is everything you need to know before your visit!

Origins of the Athenian Agora

The site of the Ancient Agora is as old as the city of Athens itself. It was originally used as a residential area and cemetery. In the early 6th century BC, it became a public space, and was used for gatherings and assemblies.

The site reached its peak during the times of classical Athens. Numerous public buildings and civic offices were constructed. These included the magnificent temple of Hephaestus and other temples dedicated to the twelve gods of Olympus. 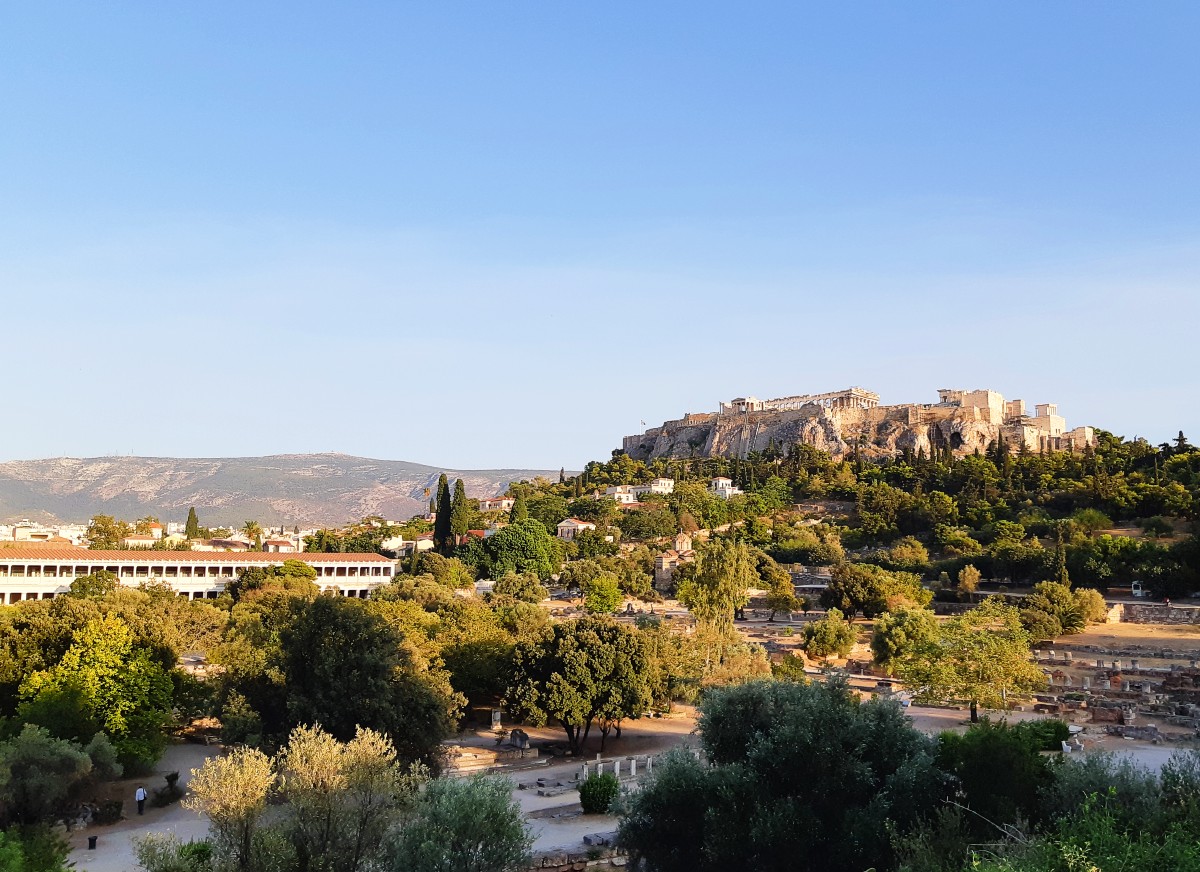 During those times, the Agora became the social, administrative, political and cultural center of Athens. It was also the marketplace, where all commercial activity was held, somehow similar to the modern Varvakios food market.

The Agora developed further during the Hellenistic period and Roman times. The magnificent Stoa of Attalos, an equivalent to a modern shopping mall, was built during that era. Today, it hosts the superb museum of the Agora. 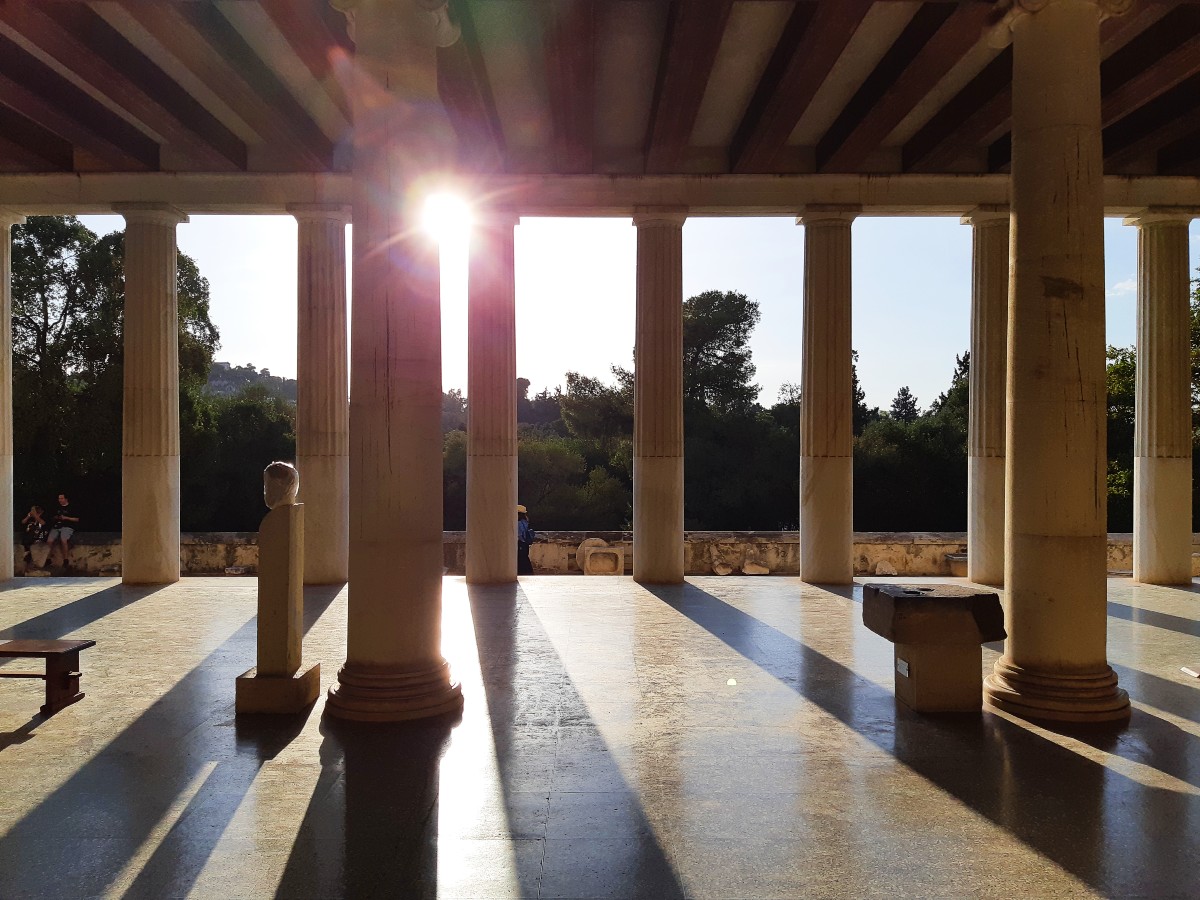 Like all sites in Athens, the Agora was partly destroyed by the invasion of the Heruli, a North European tribe, in 267 AD, and was largely abandoned.

The Ancient Agora during the Byzantine period

After a brief period of reconstruction, the Agora was affected by the Slavic invasion in 580 – 590 AD. It was completely destroyed, and gradually abandoned once again.

During the Byzantine times, new construction took place on the site. The church of Holy Apostles, known in Greek as Agioi Apostoloi, was erected in the late 10th century AD. In the next few centuries, the site was deserted again. 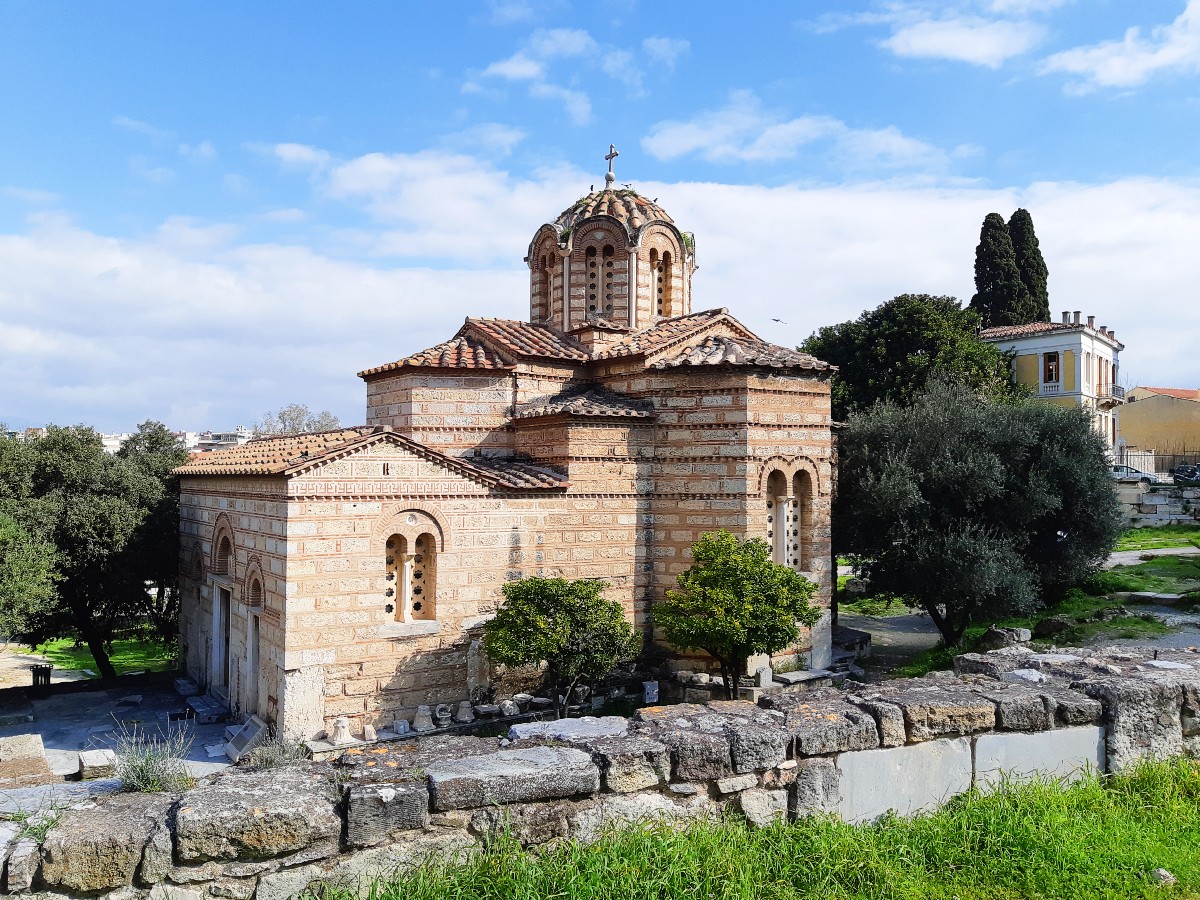 Throughout the times of the Ottoman Empire, the city of Athens fell into decline. The abandoned site was covered by debris, and was further destroyed during the Greek Revolution in the 1820s.

Excavations in the Athens Ancient Agora

After the modern Greek state was founded, Athens became its capital. People came to live here, and new buildings and private houses were constructed in and around the area of the Agora. This is when the quaint neighbourhood of Anafiotika was built.

As interest in Ancient Greece was steadily increasing, excavating the archaeological site of the Athenian Agora became a priority.

The first excavations were undertaken by the Greek Archaeological Society, and were supported briefly by the German Archaeological Institute, in the late 19th century.

During that time, construction of the Athens-Piraeus railway revealed significant remains of ancient structures. This is the green line of the Athens metro system, which passes just outside the Agora. 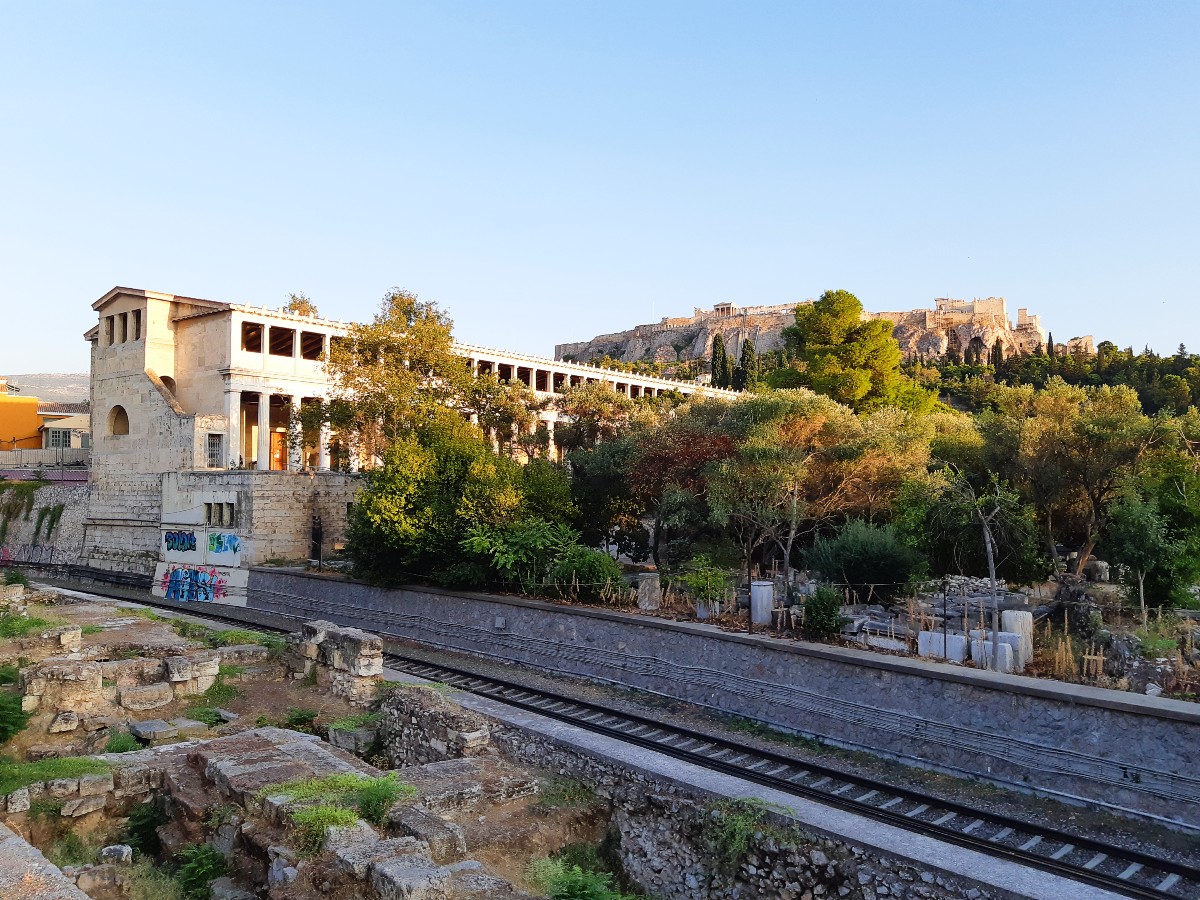 In 1931, the American School of Classical Studies in Athens took over the excavation works. Around 400 modern buildings, covering a total surface of 12 hectares, were demolished in order to reveal the whole Agora area.

Since then, the American School has been conducting further excavation and research in this amazing ancient site in the heart of Athens.

And now, let’s explore what there is to see in the Ancient Agora and the museum in the Stoa of Attalos.

The Museum of the Athens Ancient Agora

Unless you are taking a guided tour, it is probably best to start your visit at the recently refurbished museum. You will get a great overview of life in Athens during the classical times. 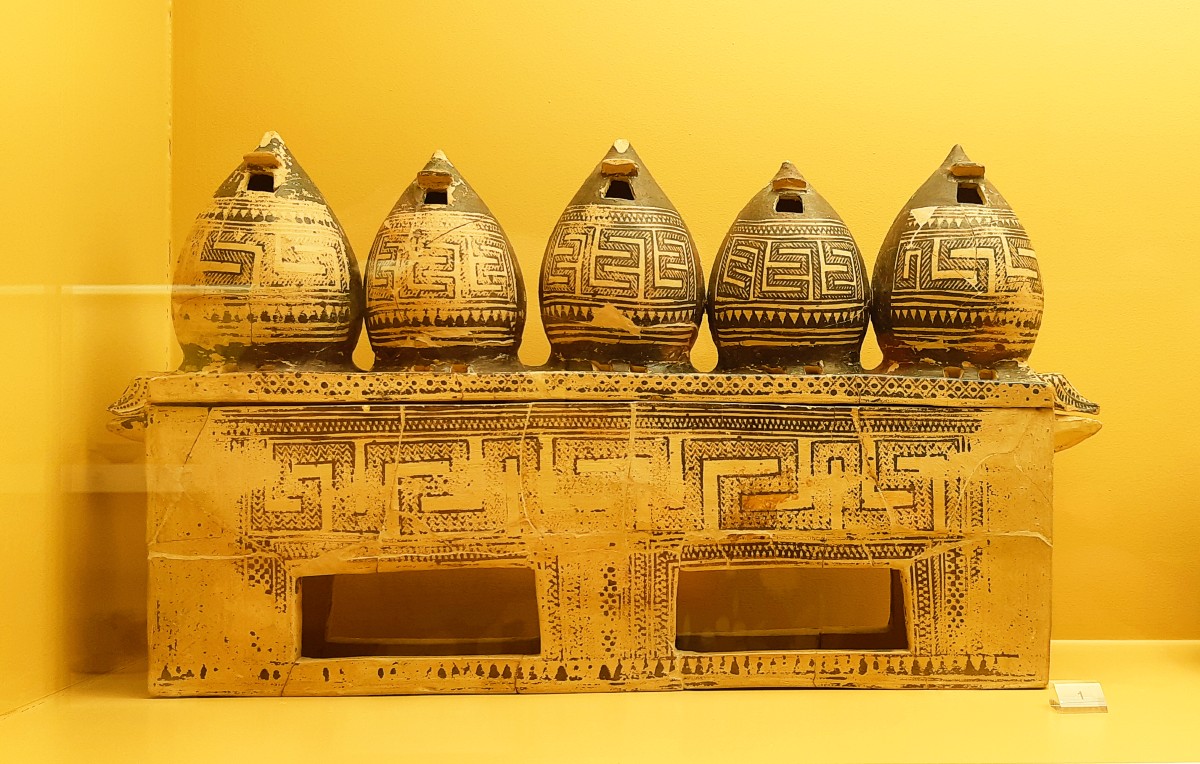 The museum of the Athens Ancient Agora is located inside the Stoa of Attalos, which was restored by the American School of Classical Studies in 1953 – 1956.

As you enter the site, you will walk along the Panathenaic Way. This road was used in the great procession of the Panathenaic festival, an important celebration to worship Goddess Athena.

The Stoa is located to your left, at the east side of the Agora. Inside the impressive building, you will see everyday objects used by ancient Athenians, such as jars, vases, and other types of household items.

There is also a large selection of potsherds used for voting, called ostraka. Some of the eponymous heroes of Athens were ostracized, i.e. exiled by popular vote.

One of the most impressive objects in the museum is a massive shield, displayed next to some marble statues. A soldier’s equipment weighed a whopping 30 kilos in total! 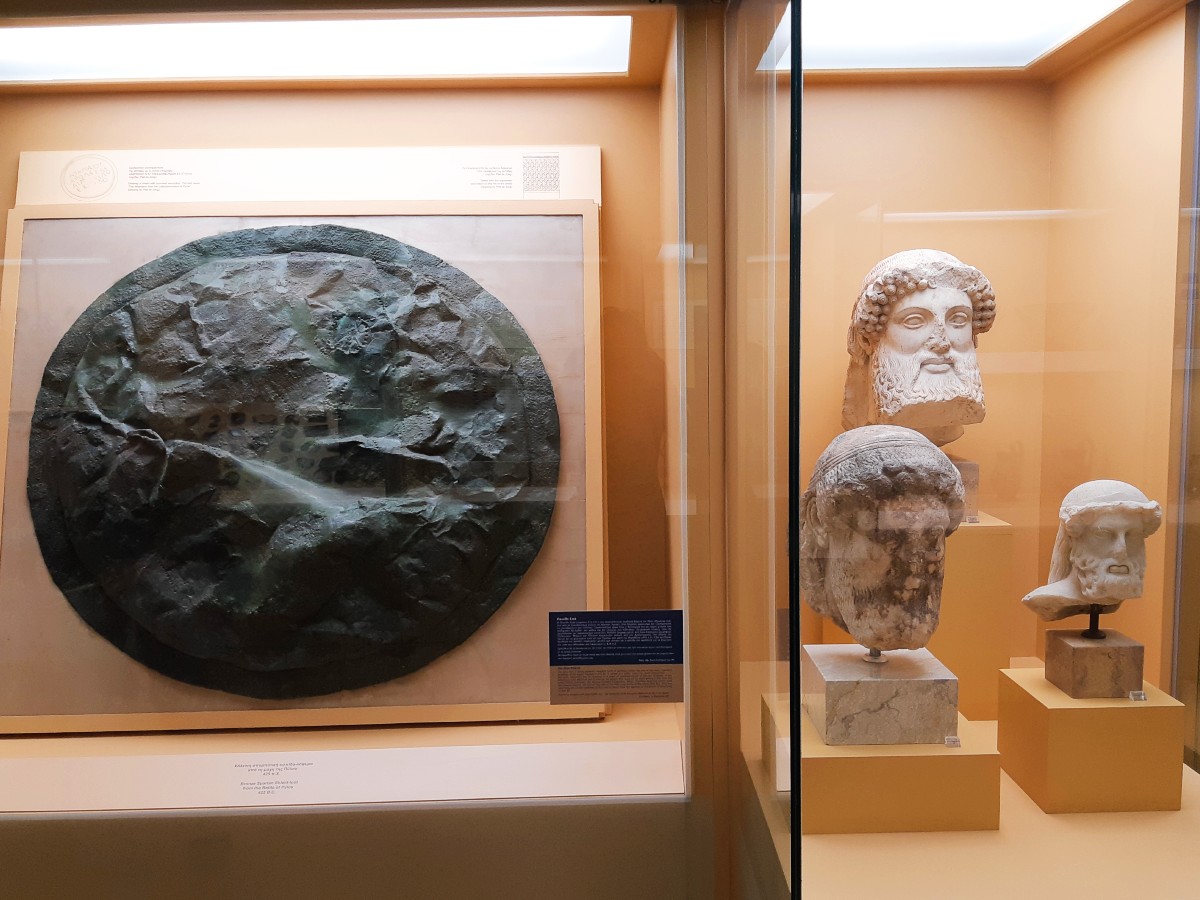 Along these items, you will see many posters and banners with lots of information about the Agora, the Athenian government and life in Ancient Athens.

Exploring the site of the Ancient Agora

The archaeological site of the Agora is one of my favourite sites in Athens, not just because of its historical significance, but also because of its natural beauty.

After you’ve visited the Stoa of Attalos, walk to the byzantine church of the Holy Apostles, to the south end of the Agora. The inside of the church has been restored and you can see some lovely Byzantine art. 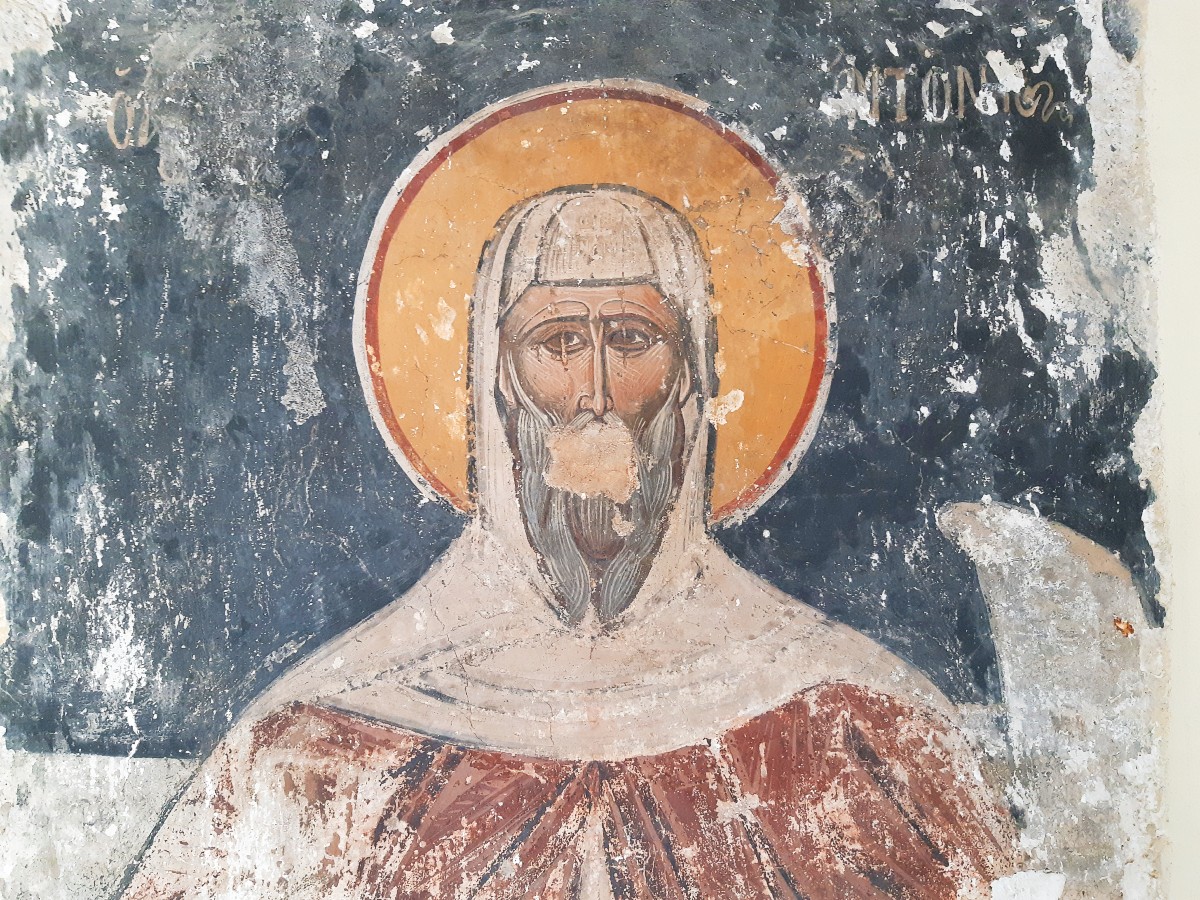 Leaving the church behind, you can walk around the ancient site and explore.

Due to the numerous attacks and periods of abandonment, many of the once majestic buildings, temples and statues are in ruins. Still, the excavated findings suggest that the marble workers working in Athens were highly skilled.

Maps of the Ancient Agora

All around the site, you will find several maps of the Agora. You can get an idea of what the site looked like at the times of classical Athens, and the centuries that followed. 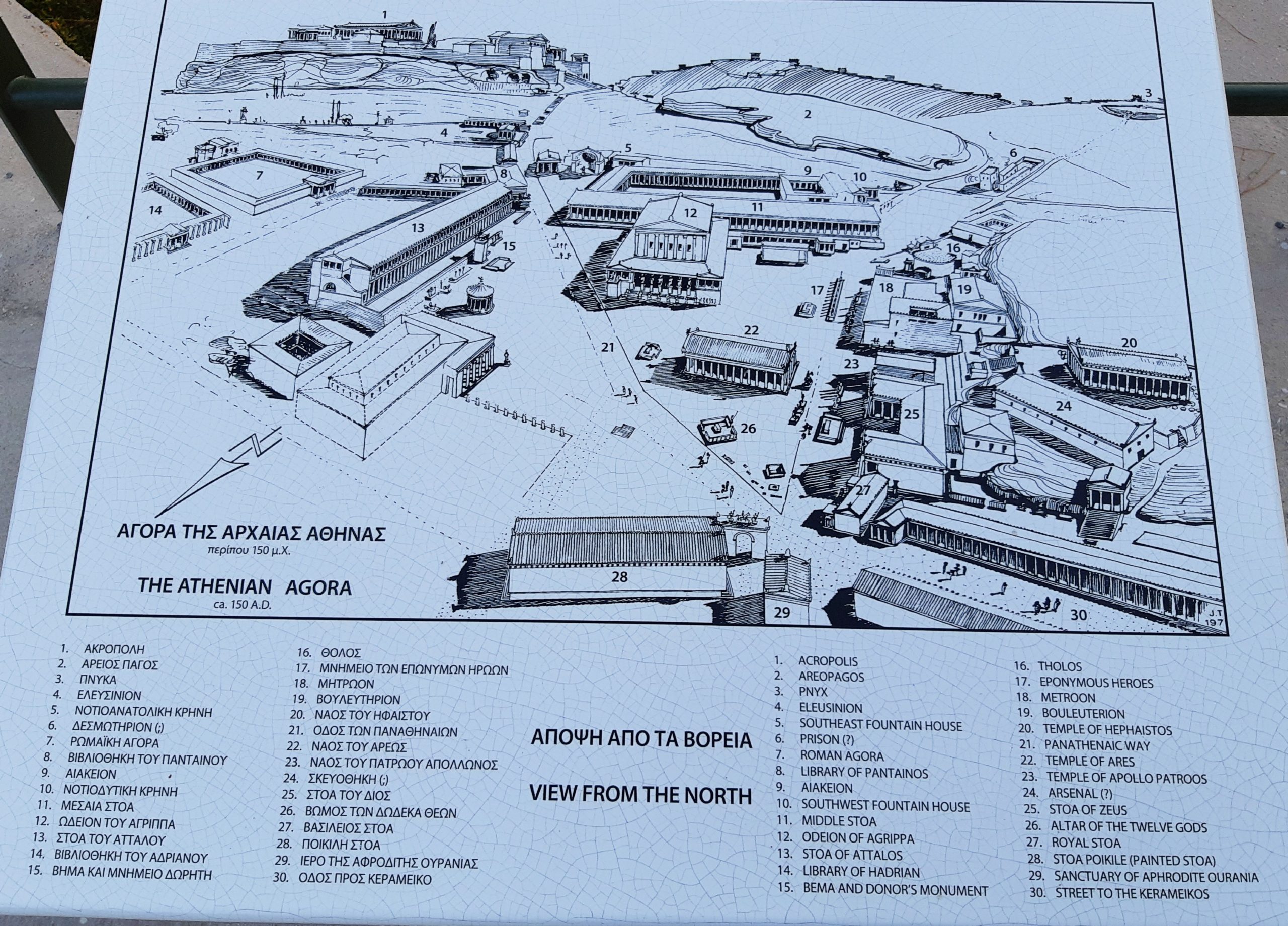 Some of the most important buildings were the Tholos and the New Bouleuterion, which served as law courts, the Royal Stoa, which was the seat of the Archon Basileus, and the Middle Stoa, which was used for commercial purposes.

Among the ruins, you can see the remains of several temples and altars. This includes the small Temple of Zeus Phratrios and Athena Phratria, the Temple of Apollo Patroos, the altar of Zeus Agoraios and a temple of Ares.

The most imposing construction in the Athenian Agora is the majestic temple of Hephaestus.

The Temple of Hephaestus

The Temple of Hephaestus, or Hephaestion, was built in the late 5th century BC. It is located on the north-west side of the Agora, close to a mount called Market Hill. 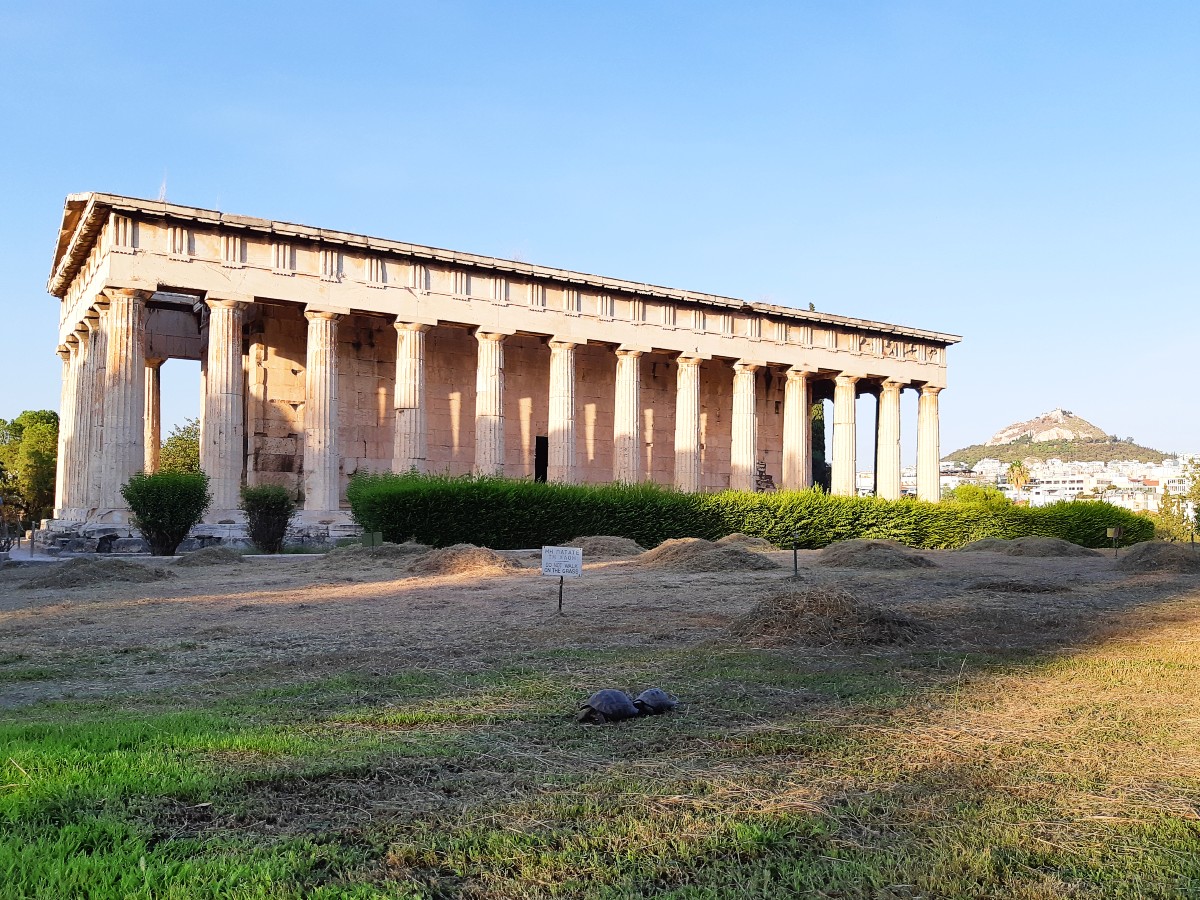 The temple is made out of marble and measures 13.7 x 31.8 metres. In ancient times, it was home to bronze statues of Hephaestus, the god of metalworking, and Athena Hergane, the patron of craft and weaving, who was also worshiped there.

As some of the temple’s metopes depicted the labours of Theseus, it was originally mistaken for a temple dedicated to the popular hero. This may explain the name of the area, Thisseion. 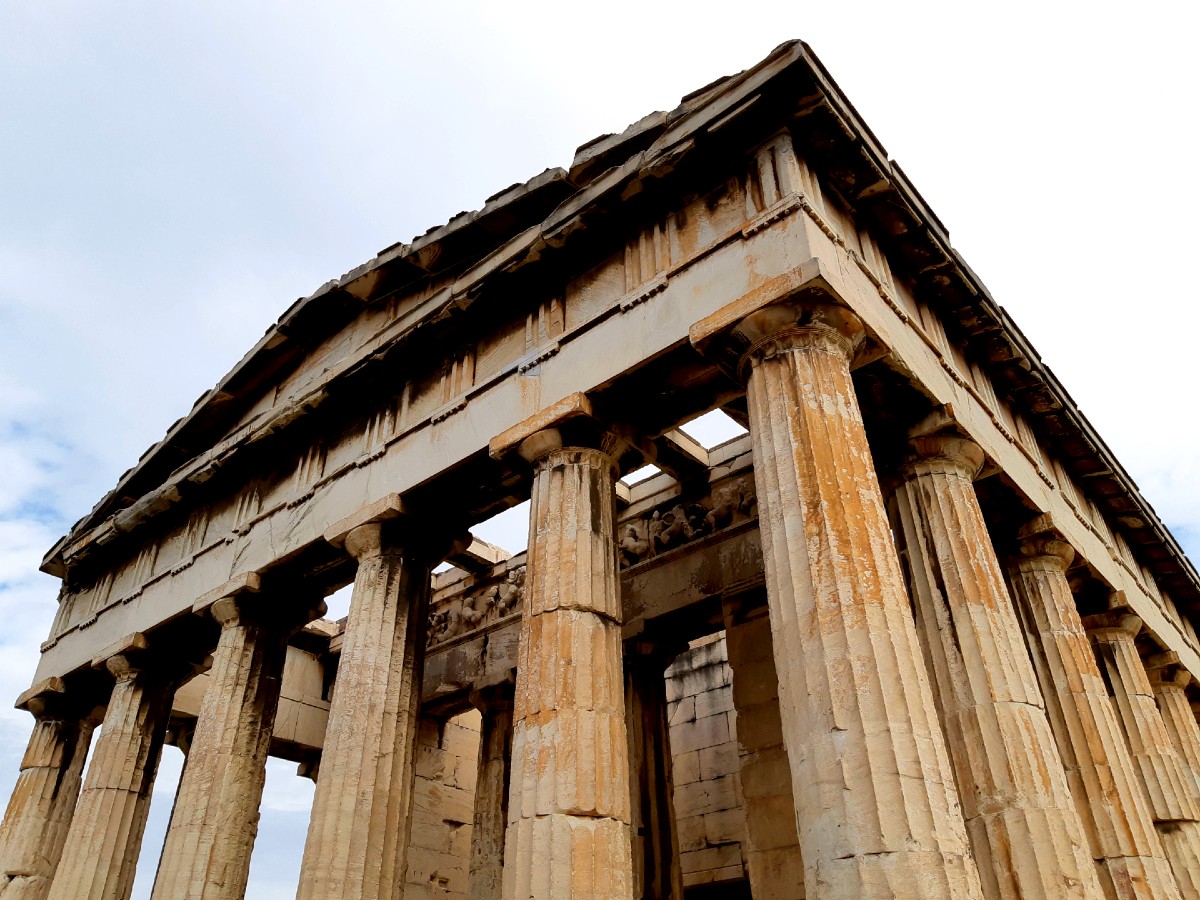 At some point in time, a Greek Orthodox church was built inside the temple of Hephaestus. Its name was Saint George Akamates.

While the exact date of its construction is not known, we know that the last liturgy took place in 1833, in celebration of King Otto’s arrival to Greece. 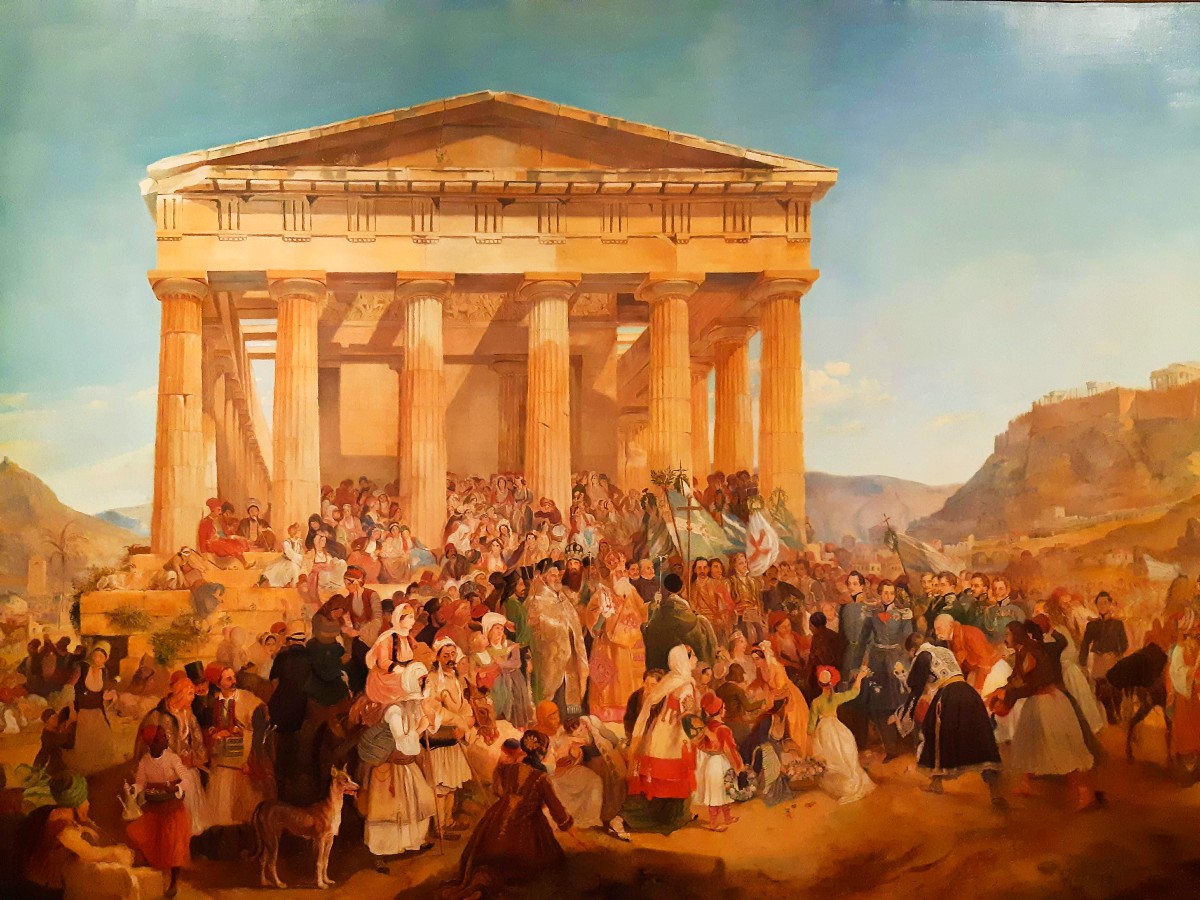 Restoration works were carried out in the 1970s, including extensive repair of the roof. The Hephaestion is the best preserved temple in Greece, and the only construction in the Agora which has remained largely intact.

The Ancient Agora is located close to Monastiraki and Thisseio metro stations, a 15 minute walk from the Acropolis. The entrance is on Adrianou street. 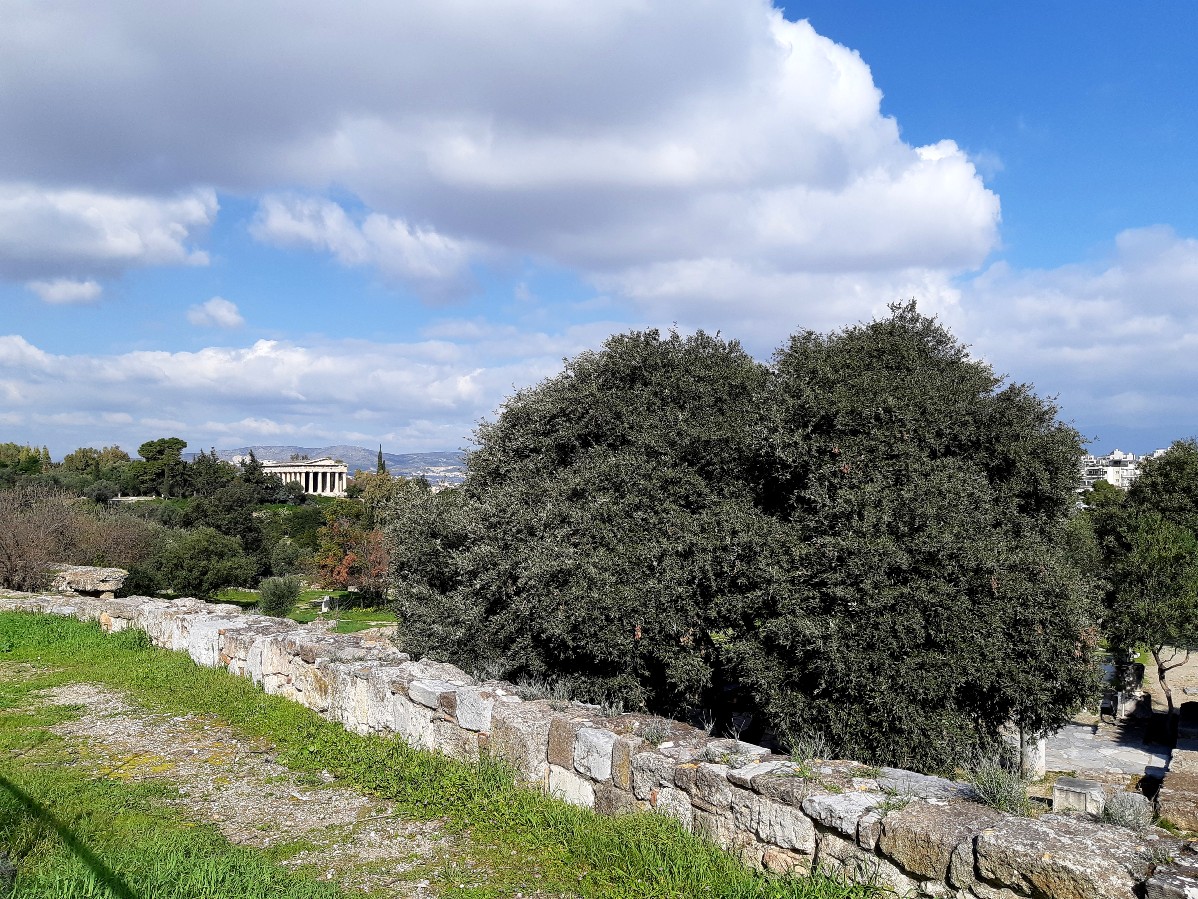 A single ticket to the Ancient Agora and the Museum costs 10 euro (April – October) or 5 euro (November – March). Opening hours vary by season, so check the official website for updated information.

A better option if you are planning to visit several ancient sites in Athens is the combined ticket, which costs 30 euro. Visitors can explore the Agora, the Acropolis and five more archaeological sites in Athens.

You can buy your ticket from the ticket office on the site, or online.

On certain days, entrance to the Athenian Agora is free: 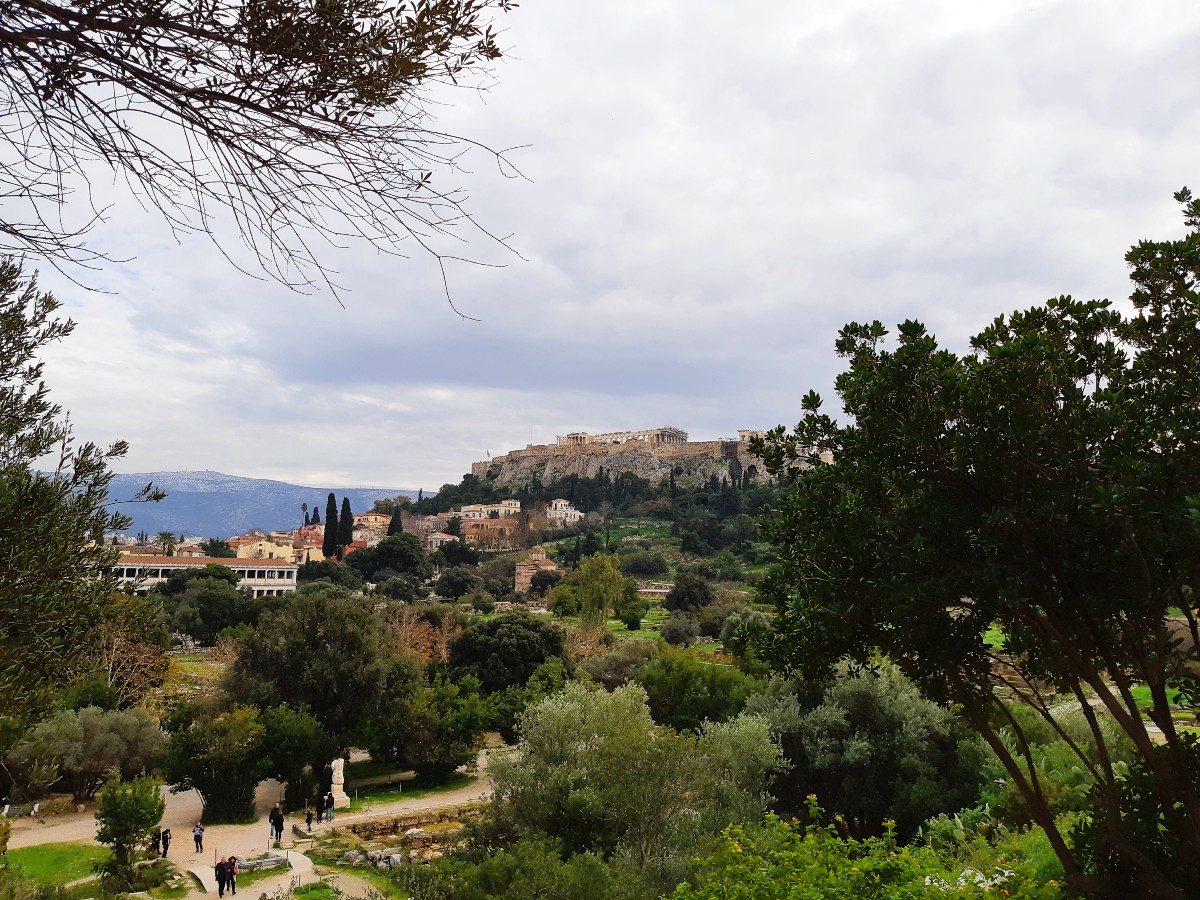 Tips for visiting the Ancient Agora

As the Agora is quite big, allow at least two hours to stroll around the whole area and explore the fascinating museum.

To fully appreciate the history of the magnificent site, you can also get a guided tour of the Athens Ancient Agora.

Don’t forget to bring some water, a hat and perhaps some sunblock. Here are a few more tips on how to stay cool in the summer in Athens.

The word “agora” (αγορά) has multiple meanings in ancient Greek. It usually indicates an assembly / congregation, a site of public life and gatherings, and a market place. But it also refers to the act of speech and the gift of eloquence. 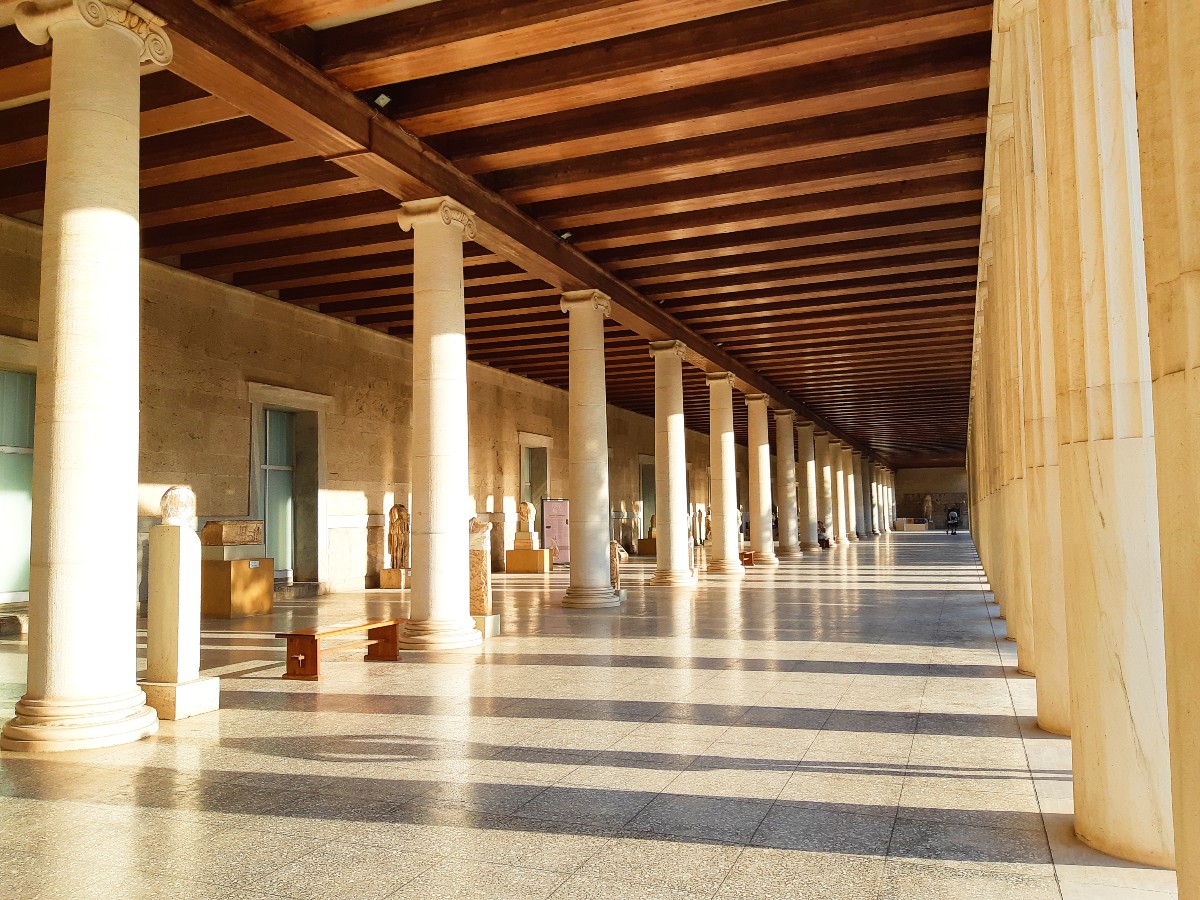 All major Ancient Greek cities had an agora, which was the commercial, political and social activity hub, where gatherings and assemblies were held.

In modern Greek, we still use the word “agora”, but only to indicate a marketplace or a purchase. The rather old-fashioned verb “agorevo” is used to indicate a somewhat theatrical speech.

Looking for another interesting Ancient Greek site to visit? I recommend going to the Temple of Poseidon at Sounion for sunset! It’s a great half day trip from Athens.

Frequently asked questions about the Ancient Agora in Athens

What was the Agora used for in ancient Athens?

The Agora was a large area in Ancient Athens where all commercial and social activities happened. It was a gathering place for people to discuss everything – philosophy, politics and social or legal issues.

What was the Athenian Agora and why was it important for the ancient Athenians?

The Athenian Agora was one of the most important areas of the ancient city. It was the place where everyone congregated to socialize and discuss, and where the Athenian democracy first developed.

Where is the entrance to the Ancient Agora Athens?

The entrance to the Agora is on Adrianou street, close to Thisseio and Monastiraki metro stations.

How much does it cost to visit the Ancient Agora of Athens?

It costs 10 euro to visit the Ancient Agora from April to October, whereas entrance is reduced to 5 euro during the off-season months. The Agora is included in the combined ticket for all ancient sites in Athens, and is free on certain days throughout the year.

What is the difference between the Acropolis and the Agora?

The Agora was the heart and soul of Ancient Athens. This is where all social, commercial and political activity took place. The Acropolis was the highest point of the city, where numerous superb temples were built, most notably the Parthenon. Today, the two sites are a 15-minute walk away from each other.

If you liked this article, you will probably enjoy these other ones:

Hi! I’m Vanessa, an Athenian, and I love exploring my city. I think that the Ancient Agora is one of the most interesting attractions to visit in Athens today. If you have visited, let me know what you thought down in the comments section!