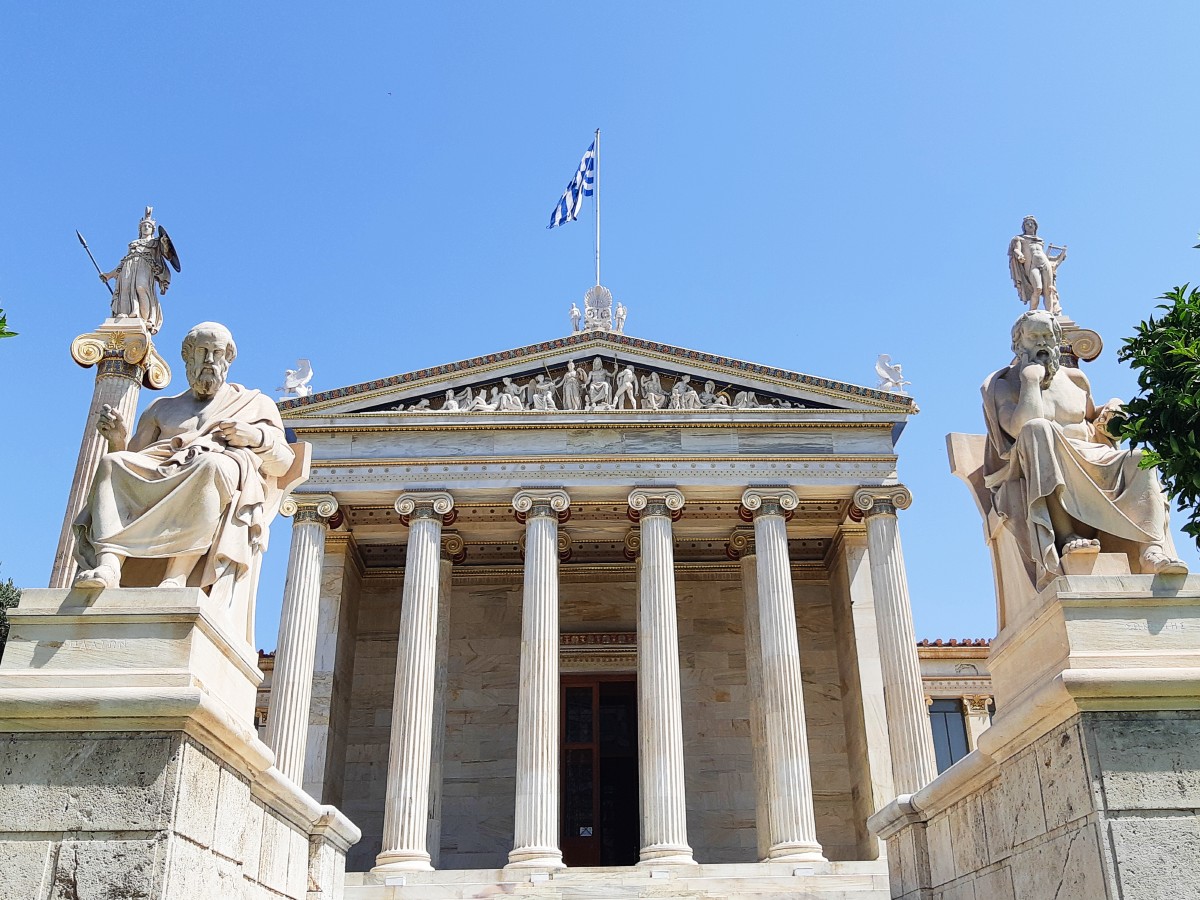 The most well known Ancient Greek philosophers like Socrates, Plato, and Aristotle, helped shape life in Ancient Greece and influenced western philosophy. Here’s a guide to the 12 most influential philosophers from Greece.

People who travel to Greece are often overwhelmed by our ancient monuments. Sites like the Acropolis of Athens, Ancient Epidaurus or Ancient Olympia are tied to Greece’s long and rich history. 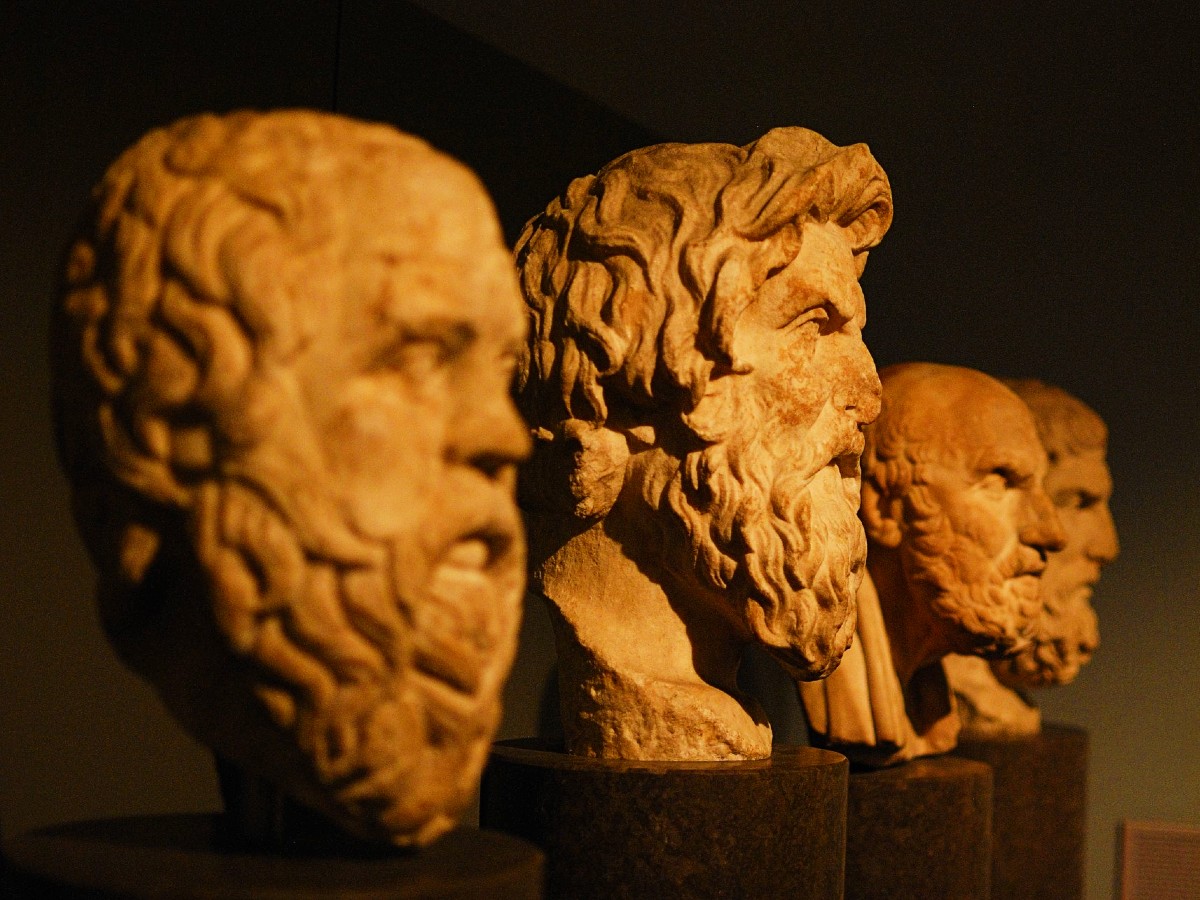 The Greek word philosophia literally means the love for knowledge and wisdom. A philosopher is someone who reflects and forms theories related to fields like logic, ethics, ideologies and human nature.

Here are 12 Ancient Greek philosophers who helped shape the main virtues and ethics in Ancient Greece. Many of their philosophical ideas have remained popular over the centuries and inspired modern day philosophers.

Thales of Miletus came from Ionia, in Asia Minor. He is generally recognized as the first ancient Greek philosopher.

Thales was a mathematician, physician, engineer and astronomer, and is known as the Father of Science. He developed several theories using observation, scientific knowledge and logic, steering clear from mythology.

He aimed to find explanations for natural phenomena, which had previously been attributed to the 12 Olympian gods. At the same time, he did not reject gods, and believed they were present in everything.

Thales was primarily interested in how the world had been created. In his view, all of nature originated from one single substance: water.

He was one of the most influential pre-Socratic philosophers, and inspired most of the people who succeeded him.

Pythagoras came from Samos island. He founded the movement of Pythagoreanism, a school of thought which advocated a communal, frugal lifestyle, in accordance with nature.

Pythagoras believed in metempsychosis. According to him, a soul was immortal, and moved into another body after death.

Aside from his engagement in philosophy, Pythagoras is well known for his contributions in mathematics and science. The Pythagorean theorem is still one of the most widely used theorems in geometry. 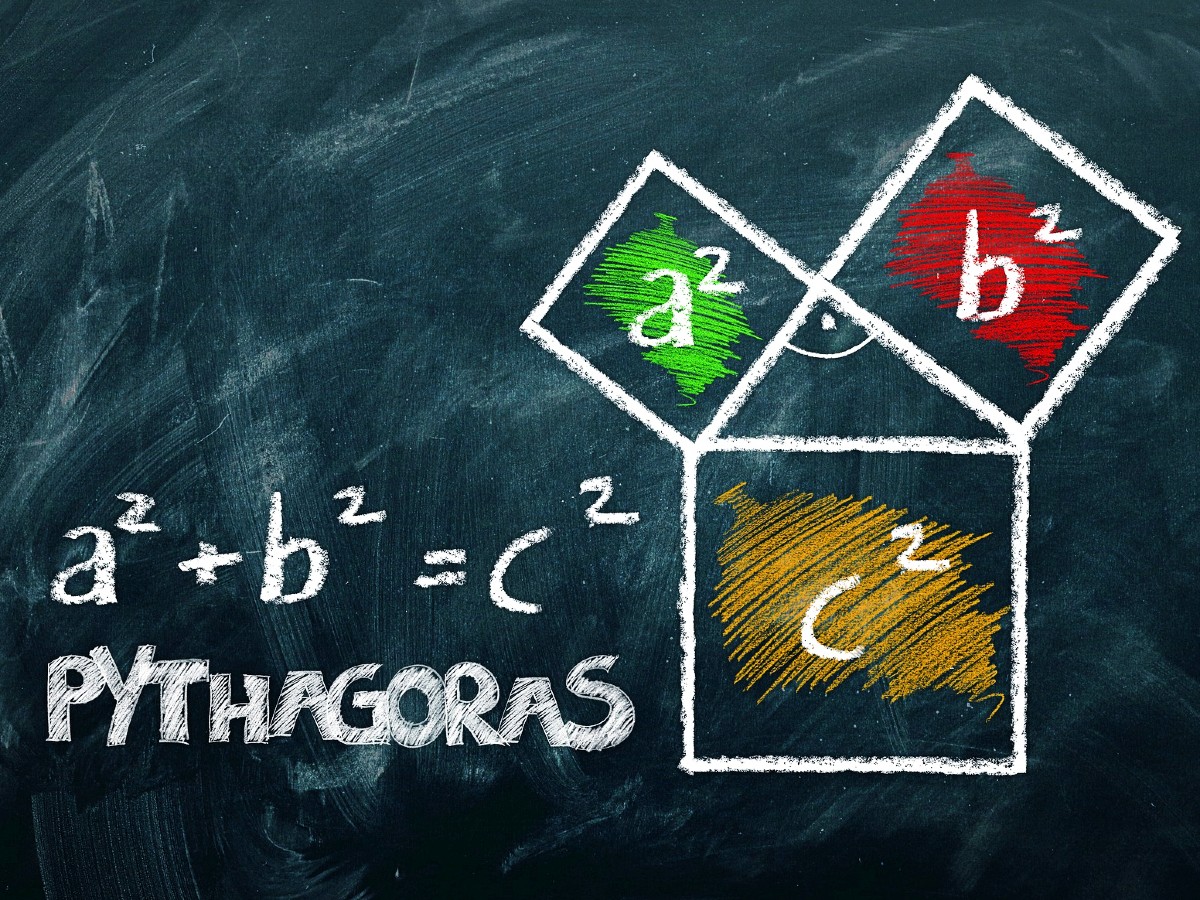 Pythagoras is often credited as the first scientist who suggested that the Earth is round. His teachings influenced later Greek philosophers and scientists of the 15th – 16th century AD, like Johannes Kepler and Isaac Newton.

The Greek philosopher Parmenides was born in Elea, south Italy. He was the founder of the Eleatic School, and is thought as the father of metaphysics.

Parmenides was one of the first Greek philosophers to use logic in his approach. He believed that real existence could be perceived only through logic and not through the senses. His main principle was that “everything is one”.

Many of his ideas were abstract and theoretical. Later philosophers often tried to simplify his philosophical propositions.

Anaxagoras was born in Clazomenae, Asia Minor, and moved to Athens when he was 20 years old. He was an astronomer and philosopher.

Among others, Anaxagoras aimed to discover the natural causes of eclipses, and described the sun as a huge rock of fire, bigger in size than the Peloponnese.

He argued that nothing can perish, but the material world is shaped of ingredients that are constantly evolving and changing form. Therefore, everything has a portion of everything.

Because of his novel ideas and his rejection of Greek mythology, Anaxagoras was sentenced to death by the court of Athens. He subsequently left the city, and spent his last years in exile.

Empedocles was born in Akragas, a Greek city in Sicily, to a noble family. During his tours around Sicily and the Peloponnese, he was regarded as an almost supernatural teacher and healer. 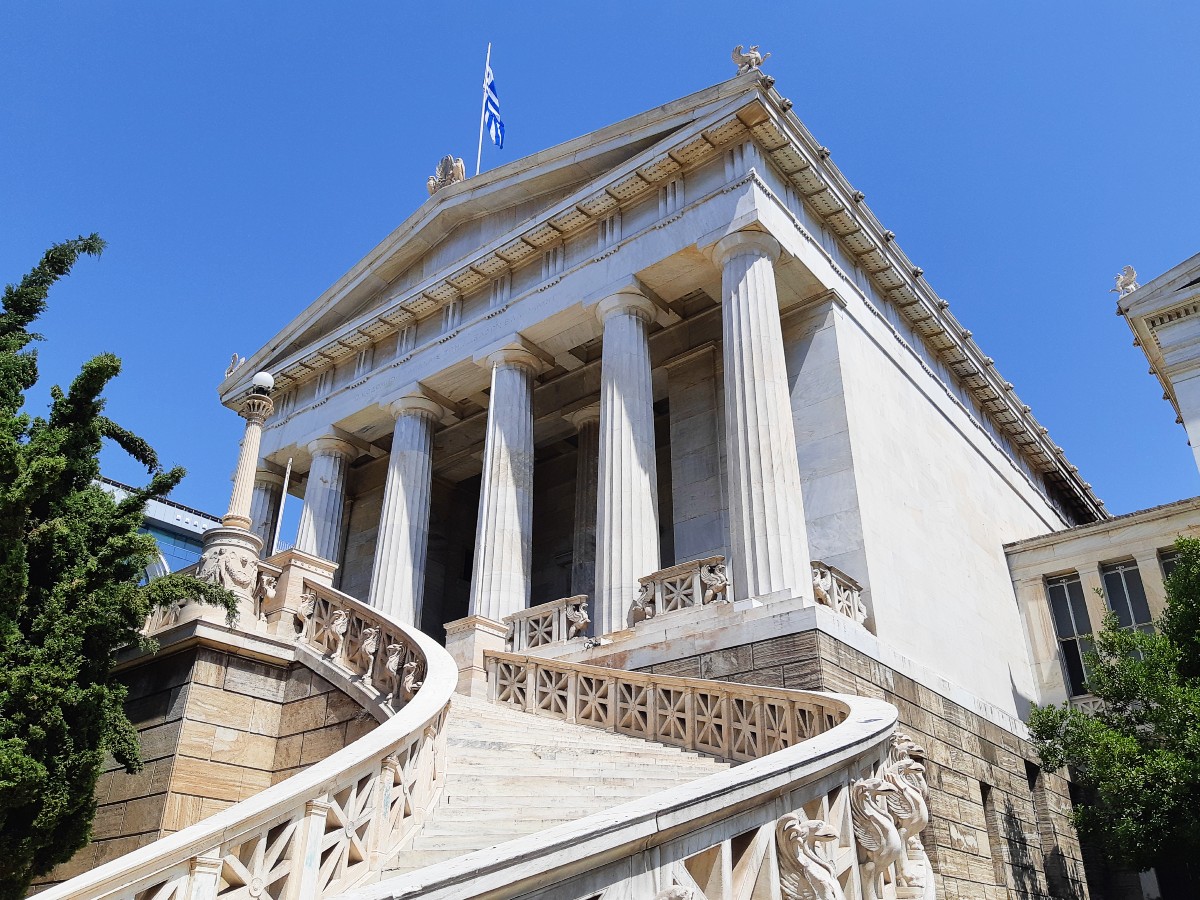 Contrary to Anaxagoras, Empedocles believed that matter is composed by the four classical elements: air, earth, water and fire.

Every change among those elements was connected with a force moving towards Love or Strife, two opposite virtues that need to be in balance for the world to thrive.

Following the Pythagoreans, Empedocles spoke against meat eating and animal sacrifices. He also believed that soul and perception are related more with the heart, rather than with the brain.

Zeno was born in Elea, South Italy, and was a follower of Parmenides.

He expanded on his teacher’s philosophical ideas, and researched space, time and the concept of infinity. Among others, he advocated that motion was nothing but an illusion.

Zeno became known for the way he pushed people to perceive reality. He is famous for his paradoxes, which challenge common perception and common sense. An example of a popular paradox is the race between Achilles and the turtle.

Socrates of Athens is the best known Greek philosopher, and one of the founders of western philosophy. He was so influential, that all philosophers who lived before him are known as “pre Socratic philosophers”.

Originally the son of a wealthy stonemason, Socrates was first interested in philosophy during his teenage years. Unlike his predecessors, he was more interested in examining man and society, rather than the material world and the cosmos. 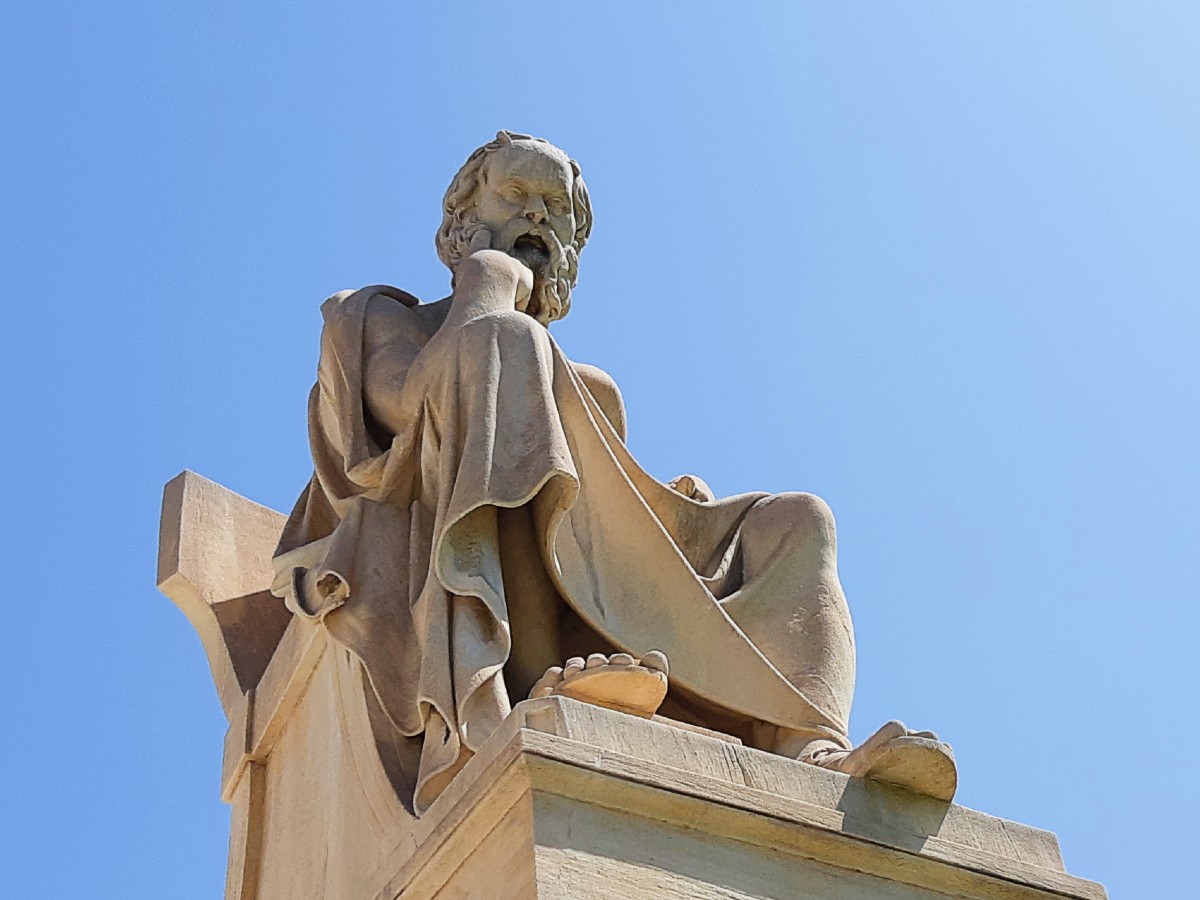 The great Greek philosopher of the 5th century BCE developed his own methods and way of thinking. His established the Socratic method (maieutiki, from the Greek word for midwifery) which was based on the following principle:

A dialogue between two or more people is meant to stimulate critical thinking and help each person discover their own beliefs and find their own solutions to several issues.

Despite his contribution to philosophy (or because of that), Socrates was eventually accused of atheism and corrupting the youth and sentenced to death. He refused to escape the city, and famously drank a cup of hemlock poison (conium) in 399 BCE.

Socrates famously wrote no texts. He is known through the accounts of his students, most notably Plato’s Dialogues.

Democritus was born in Abdera to a wealthy family. Even though he was contemporary to Socrates, he is classified among the pre Socratic ancient Greek philosophers. 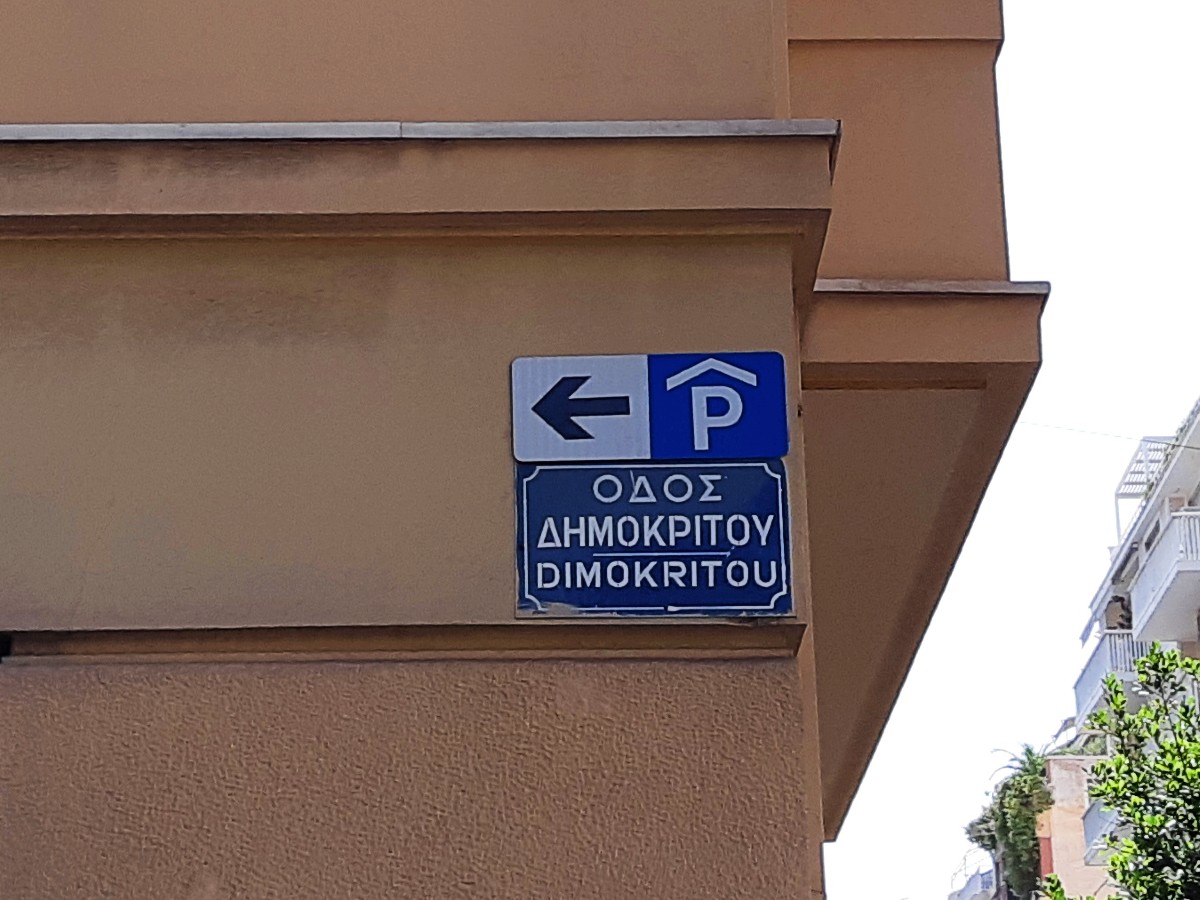 He was interested in every single field of human knowledge of the time, apart from religion and politics. Among others, he studied mathematics, meteorology, music, cosmology, linguistics and history. Sadly, much of his written work has been lost.

His main life goal is happiness, which includes peace of mind and stability. He advocates that material goods or money are not conducive to happiness.

What makes a man happy is rational thinking and education. At the same time, a man needs to find happiness in what he has.

Plato is another famous Greek philosopher born in Athens. He is the best known student of Socrates, and was in turn a teacher of Aristotle.

Plato founded a school of thought called Platonist, and the first institution for higher education, called the Academy. He is one of the very few ancient Greek philosophers whose written work has survived almost in its entirety. 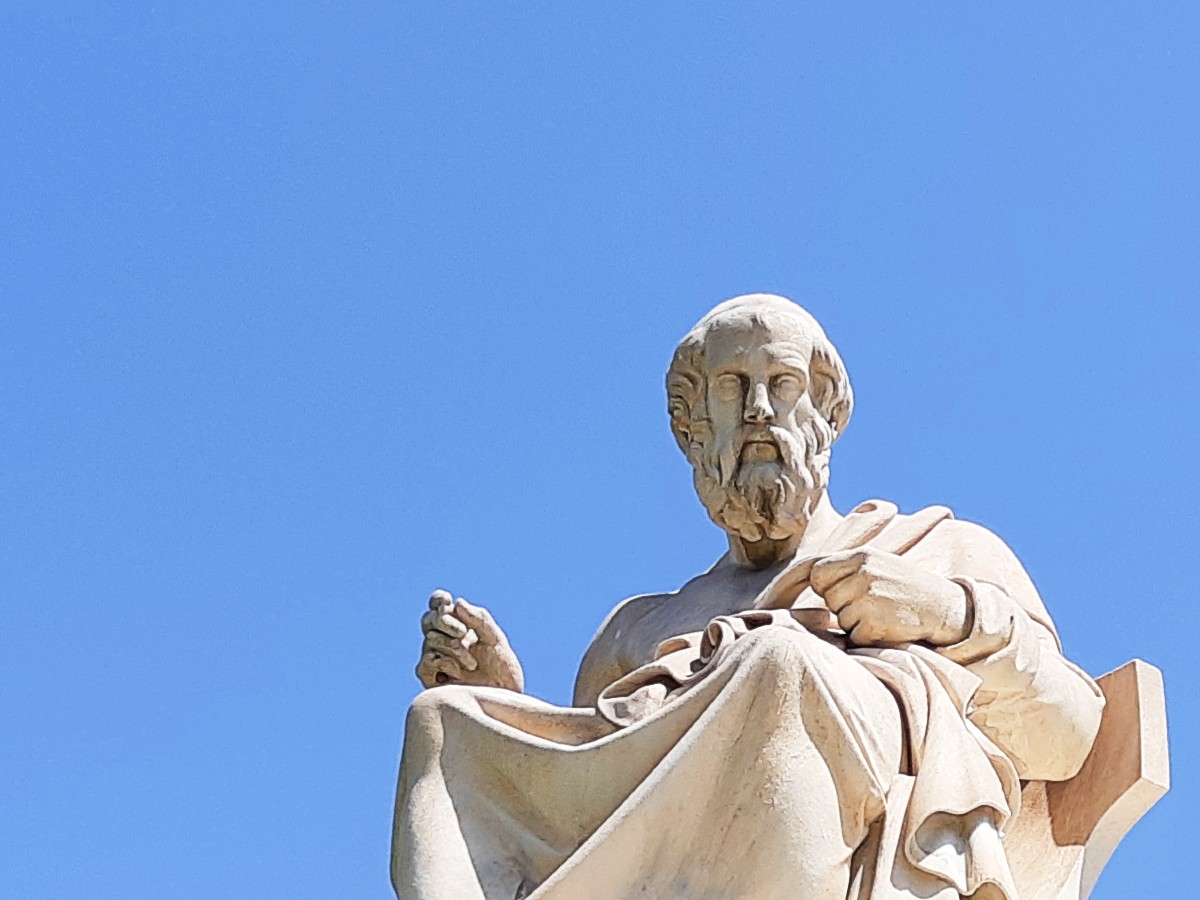 One of Plato’s best known political philosophy works is “the Republic”. It discusses justice, aiming to answer the question of what constitutes a just man and a just city-state. It considers the concepts of good and evil, in relation to the body and the soul.

Plato has also contributed to philosophy through the theory of Forms, where he proclaims that absolute, non-physical ideas are more real than the natural world.

Born in Stagira, Northern Greece, Aristotle moved to Athens in his late teens, and became a student in Plato’s Academy. He was a tutor of Alexander the Great, the king of Macedon.

Aristotle founded his own school, the Lyceum, which we can still visit today, with the combined ticket for all the sites in Ancient Athens. He also launched the Peripatetic School of Philosophy. 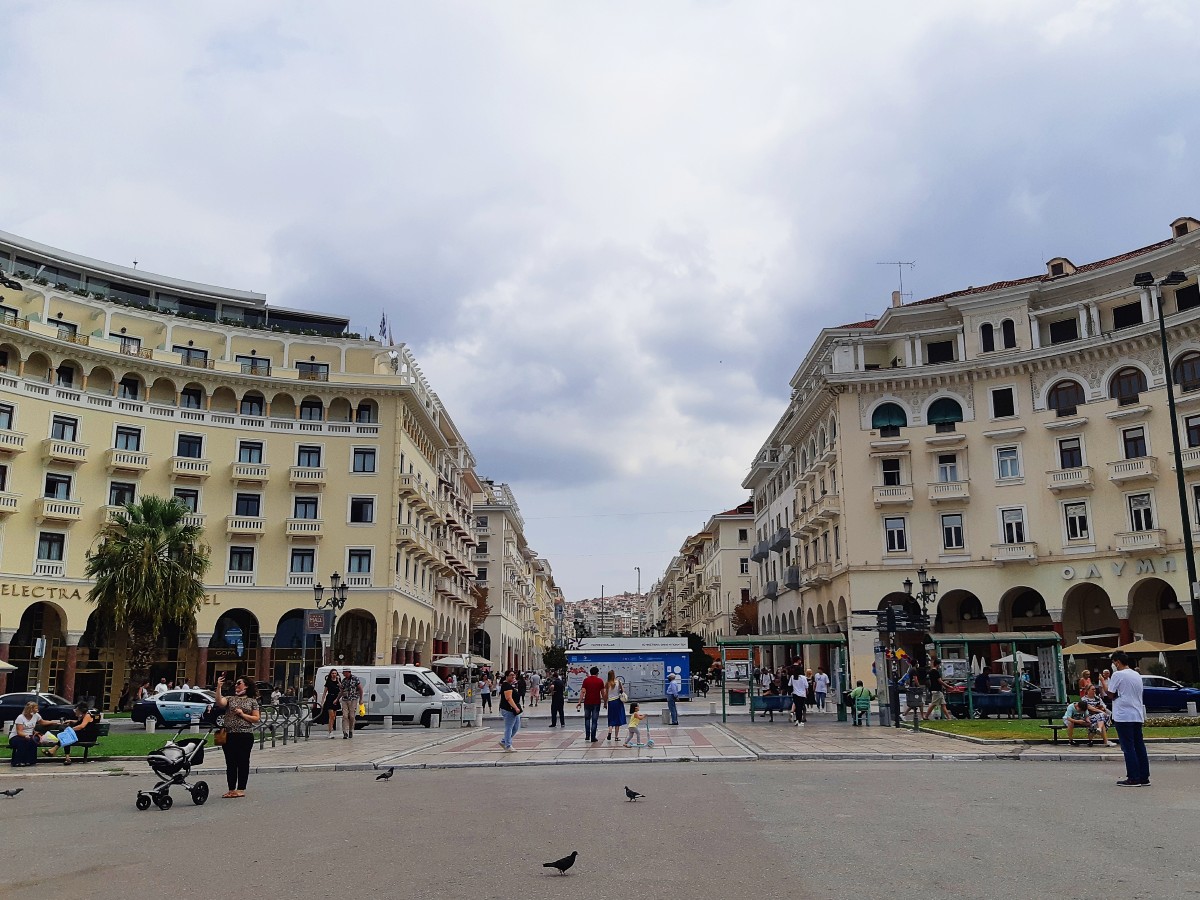 Like Democritus, Aristotle was a polymath. He was interested in numerous seemingly unrelated topics, from physics and biology to theatre, music and politics.

Aristotle researched and studied the numerous philosophies that had been established before his time, and synthesized them into more complex ideas.

He further differentiated the four elements into hot and cold / wet and dry, and suggested that they are inseparable from those qualities.

Aristotle wrote several works on these subjects. His work inspired later philosophers, and has had a profound influence on western philosophy.

Epicurus is one of the best known ancient Greek philosophers, owing partly to the fact that his ideas have often been misinterpreted.

Epicureanism advocates for a pleasant and tranquil life. His most important virtues are peace of mind (ataraxia), freedom and the absence of pain and fear. Self-sufficiency and friends are important for life to be pleasant.

According to Epicurus’ system of thought, pleasure is morally legitimate and we must pursue it, to ultimately achieve ataraxia. In this light, even pain can be a positive thing, if it leads to peace of mind.

Some of his best known principles are the following:

Diogenes, best known as Diogenes the Cynic, was born in Sinope, on the Black Sea. In the mid-4th century BC, he was exiled from his hometown and moved to Athens.

He followed a very simple lifestyle, wearing rugs and begging often. His house was a big ceramic jar, but he allegedly dined and spent the night wherever he happened to be. In modern terms, he would be called a vagabond, a citizen of the world. 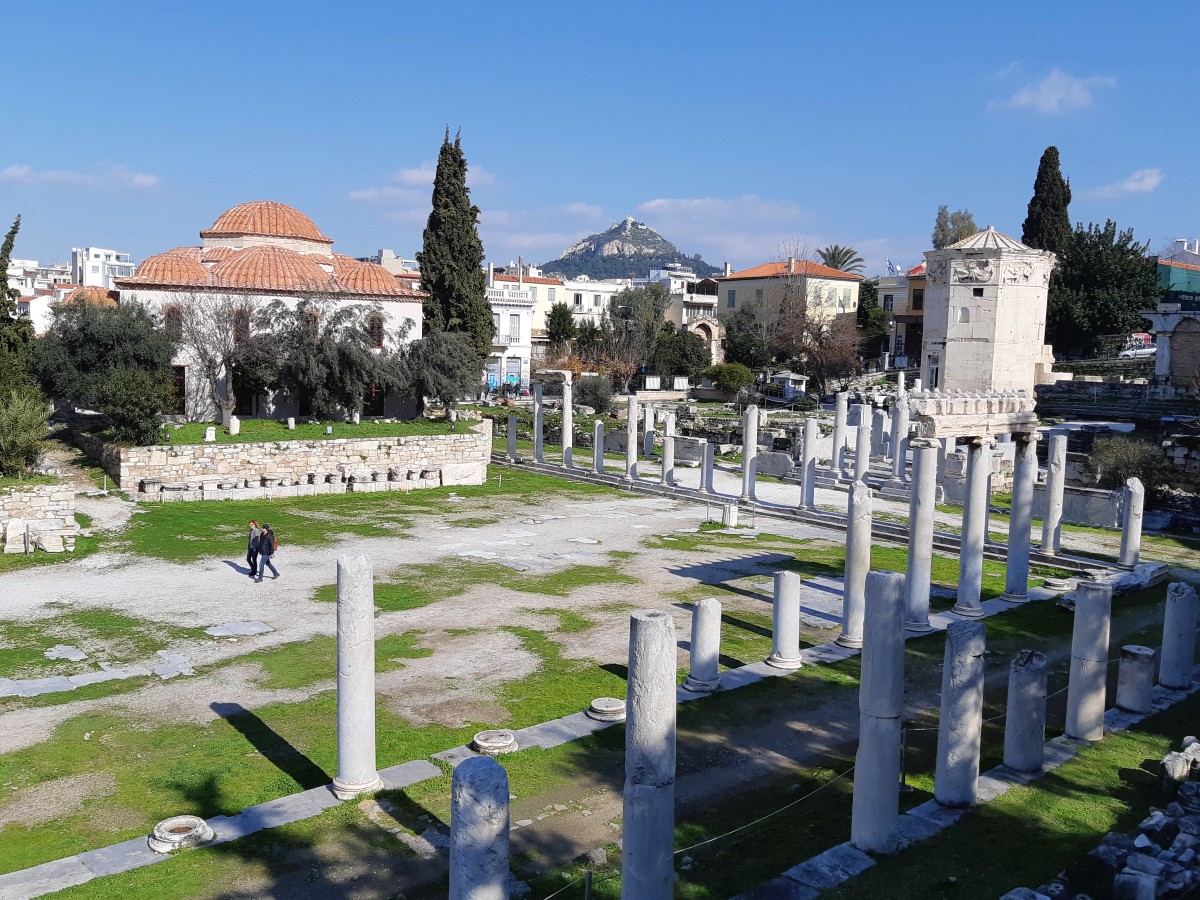 Diogenes criticized the city’s social and cultural conventions, which he thought were corrupt. He believed that human corruption could disappear if man returned to natural life and self-sufficiency.

Alexander the Great met Diogenes in Corinth, in 336 BCE, and asked the philosopher if he could do something for him. Allegedly, Diogenes replied that he would like Alexander to stand out of his sun.

According to another story, the king of Macedon said that “if I were not Alexander, I would have liked to be Diogenes”.

The Ancient Greek philosophers in the modern world

The philosophers mentioned above, along with many others, set the foundations for critical thought and analyzed complex topics. It is no exaggeration to say that they helped shape the western thought of the 19th and 20th century, and by extension the modern world.

Today, you will see streets and squares named after them, everywhere you go in Greece. Statues of Socrates and Plato have been placed in front of the Academy building in central Athens.

Here are a few more questions that people ask about famous philosophers from Ancient Greece:

What did philosophers do in ancient Greece?

The word philosopher comes from the Greek words for love and wisdom. Most of the Greek philosophers were scientists, and were typically interested in several topics. They attempted to explain the world around them using reason and logic.

Who are the 3 most important Greek philosophers?

The most famous philosophers of Ancient Greece are Socrates, Plato, and Aristotle.

Who was the oldest Greek philosopher?

Thales of Miletus, who was born in 624/623 BCE, is generally recognized as the earliest Greek philosopher. He is also known as the father of science.

Who is the father of philosophy?

Socrates of Athens is considered to be the Father of Western Philosophy.

How did Greek philosophy influence the world?

Greek philosophy helped shape a number of topics. Some examples are metaphysics, ontology, logic, reason, politics, ethics, biology, rhetoric and epistemology. The ancient philosophers started a specific way of thinking, which evolved over the centuries and influenced western civilization.

If you want to discover more about Greek philosophy, check out the Myths and Philosophers private walking tour in Athens!

Here are a few more articles about Athens and Ancient Greece:

Hi! I am Vanessa from Athens, and I love helping people discover more about Greece. Ancient Greek philosophy is a huge subject, and I hope this article has inspired you to look into it further. Follow my FB page and FB group for more Greece-related info!

1 thought on “12 Famous Greek Philosophers Who Changed The World”