How to get from Athens airport to the city center

Once you’ve landed at Athens airport in Greece, there are several ways to get to the city. There are taxis, pre-booked taxis, the Athens metro, the suburban railway and of course, the airport buses. The publicly run airport bus is the cheapest way to get from Athens airport to Athens city center, and also other parts of the city.

This guide will show you the different airport bus services, how to take them, where they go and more. Note that it is still mandatory to wear a face mask on the buses in Athens, so make sure you’ve got one with you.

There are five Athens airport buses to the city, connecting the airport to different areas of Athens. Here’s a list:

The first four buses are run by the company that also operates all urban buses in Athens. The bus stop is right outside the airport – just follow the signs.

The Athens airport bus ticket to any destination costs 5.5 euro. You can buy your ticket from the kiosk just next to the bus, using cash or credit card. You will then need to validate your ticket when you get on the bus. Just scan it on the blue card reader, and a message will come up saying “Successful”. 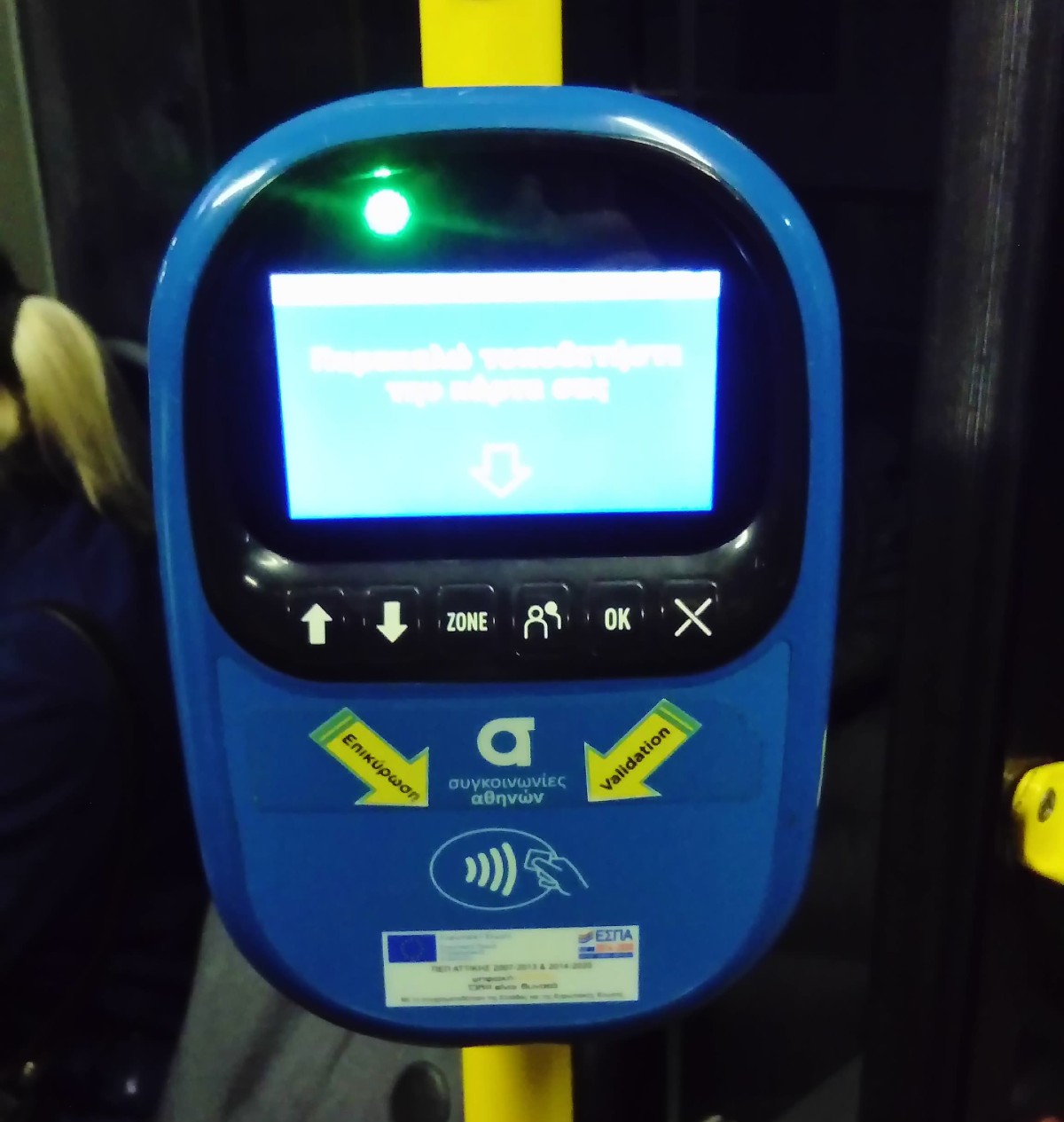 Tip – if you are planning to withdraw euros when you land, try to withdraw at least one 20 euro note. The employees will generally not be too happy to break a 50 euro note. Actually, this is common everywhere in Greece.

On the bus, there are monitors showing all the next stops. If you want to get off the bus before the last stop, it’s best to double check on Google Maps, or ask a fellow passenger. If you miss your stop, the next alighting point will generally be a kilometre or two away!

For all other information and the official timetables of all Athens airport buses, have a look here.

This is probably the most popular Athens airport express bus. It runs every 15 or 20 minutes, depending on the time of day. It’s a 24/7 bus, so if you are landing after midnight you can easily use bus X95 to get to central Athens. The Athens airport to Athens route would normally take about an hour, but traffic and the occasional storm might cause delays.

The X95 bus will drop you just off Syntagma square, on Othonos street. This is only a short walk from Plaka and a ten minute walk from the Acropolis area, where many visitors choose to stay.

If you have heavy luggage, it’s best to use the Athens airport metro and get off at Acropolis metro station instead. Walking on the cobbled streets with suitcases isn’t too much fun! A few times a year, there is a train strike in Greece. This will affect the part of the metro and suburban railway route that gets to the airport. However, the urban part of the route will not be affected.

On those days, you can take the X95 bus, and connect with the metro at Syntagma square. Other metro stations where you could connect to the metro are Nomismatokopeio and Ethniki Amyna.

As you would expect, the Athens airport bus X95 also runs in the opposite direction, leaving from the city center and going to the airport.

On it’s return journey the bus to the airport from central Athens departs from Othonos street in Syntagma Square, just in front of Eurobank. The bus stop is marked as “Aphetēria” on Google Maps. There will typically be plenty of yellow taxis there as well. You can get your ticket at the kiosk, and pay with cash or card. If you are getting on the bus at a later stop, you can only pay the driver with cash. It’s best to have exactly 5.5 euro if you can. In my experience, airport buses run on time, however I have heard people report that they had delays. This could be the case if the bus is delayed on its way from the airport. Allow plenty of time to get to the airport, especially if it’s rush hour.

If you want to get straight from the airport to Piraeus port, you will need to get the X96 bus. The Athens airport bus to Piraeus departs twice an hour, and it can take a fairly long time to get to the port, depending on traffic and time of the day.

I’ve heard of people who got to the port in just over an hour, but it’s rather rare. In some cases it could take you a couple of hours to get to Piraeus.

In fact, the Athens bus X96 makes several stops along the way to Piraeus. If you are in a hurry it’s best to take a taxi, the blue metro line or the suburban railway.

Once you are on the Athens airport Piraeus bus and have validated your ticket, make sure you’ve got an eye on your valuables. This bus gets fairly busy, and tourists are always an easy target.

You can also get to Piraeus on the blue metro line, or the suburban railway.

The X93 Athens airport shuttle will take you to the two intercity bus stations in Athens. Here is where you’ll need to go if you want to travel to other towns in Greece. The intercity buses are owned by private companies called KTEL. At the moment, Athens has two intercity bus stations, Liossion and Kifissou. There is a plan for them to be merged and moved to another part of the city, easily accessible by metro, but don’t hold your breath.

The two stations are marked on Google Maps as follows:

The X93 bus only makes a few stops before it gets to Liossion station. It then continues to Kifissou station, where it terminates.

If you are going to Liossion station, pay attention to the monitors, and don’t hesitate to ask the driver or another passenger where to get off.

People who have decided to spend a few days by the Athens Riviera can take bus X97. This bus connects the airport with the coastal areas of Vouliagmeni, Voula and Glyfada, terminating at Elliniko. It should take you about an hour to reach your hotel from the airport.

KTEL bus from the airport to Rafina port

The Athens airport to Rafina bus is an orange bus run by a KTEL company. It departs from just opposite the airport Sofitel hotel, between exits 2 and 3. Tickets cost 4 euro.

As you will notice, this bus isn’t so frequent, so you could consider getting a taxi to Rafina instead.

You may not have heard of Rafina port before, but ferries depart on a daily basis for several islands. These include two of my favourites, Andros and Tinos, and also Mykonos. Rafina is a much friendlier port than Piraeus, and it’s a lot closer to the airport. So if your plan is to head straight to the islands, check out if there’s a ferry departing from Rafina to your island of choice.

Here are some questions that people have asked in the past about getting to the airport in Athens:

How do I get to Athens airport?

You can get to the Athens airport by bus, metro, suburban railway and taxi.

Does the Athens metro go to the airport?

Yes, the blue Athens metro line goes all the way to the airport. There are two trains per hour to the airport, while all other trains terminate at a station at the outskirts of Athens, called Doukissis Plakentias.

How much is the metro from Athens airport?

A single metro ticket to / from the Athens airport costs 9 euro. A return ticket, valid for 30 days from the time of first validation, costs 16 euro. There is also the so-called tourist ticket which costs 20 euro, and allows a return trip from the airport plus unlimited transport in central Athens for 72 hours.

How much is a taxi from Athens airport to Athens?

Set prices for taxis are 38 euro from 5 am to midnight and 54 euro from midnight to 5 am.

Is it better to take the bus, or the metro to the airport in Athens?

Both the bus and metro are inexpensive and efficient. If there is traffic, the bus can get delayed, while the metro generally runs on time. A single ticket for the bus costs 5.5 euro, while the metro costs 9 euro.

You might also find these other travel guides and Athens sightseeing itineraries useful:

Hi! I am Vanessa from Athens, and I love helping people discover Greece. I hope this article on the Athens airport buses was useful. I If you have any further questions, let me know in the comments! Feel free to like my FB page for notifications on new blogposts and other news about Greece.

8 thoughts on “How to take the Athens airport bus”