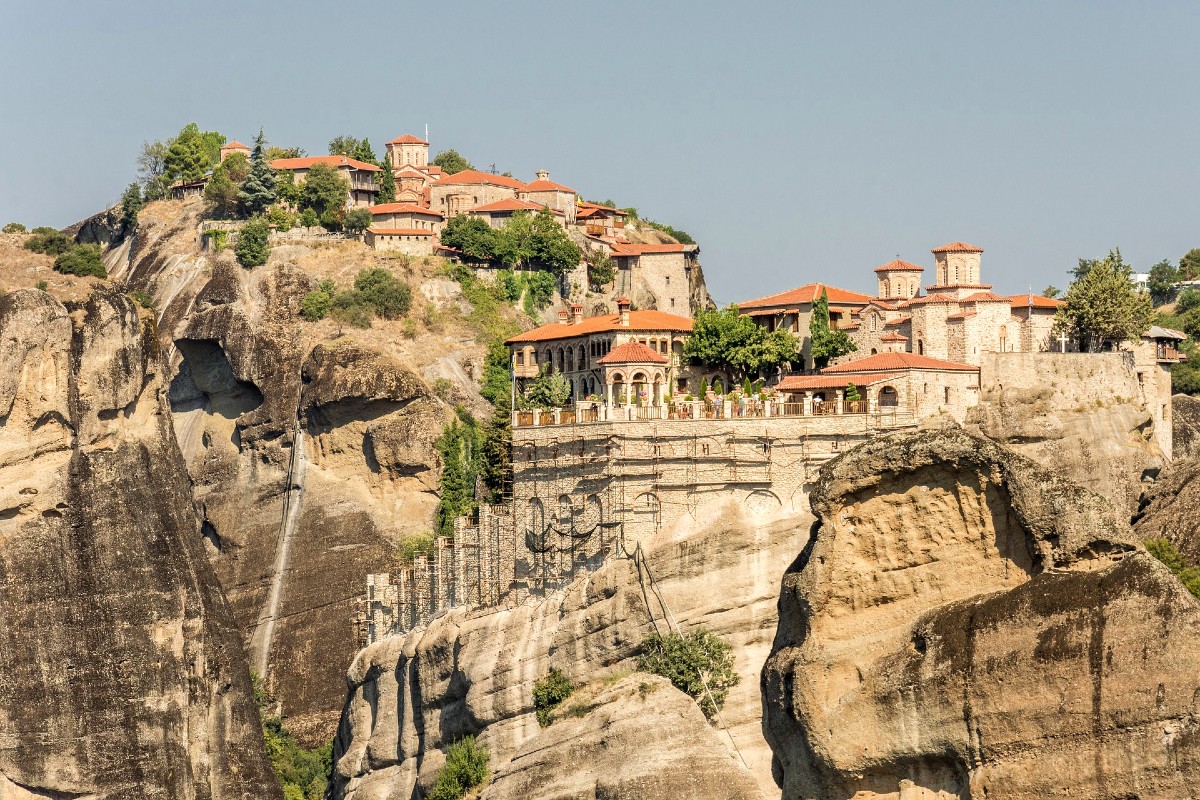 Meteora is a unique area in Greece, and quite possibly the world. The wider area is full of impressive, massive rock formations. These rocks were formed millions of years ago. Over time, they were further shaped by the wind, rain and other natural phenomena. 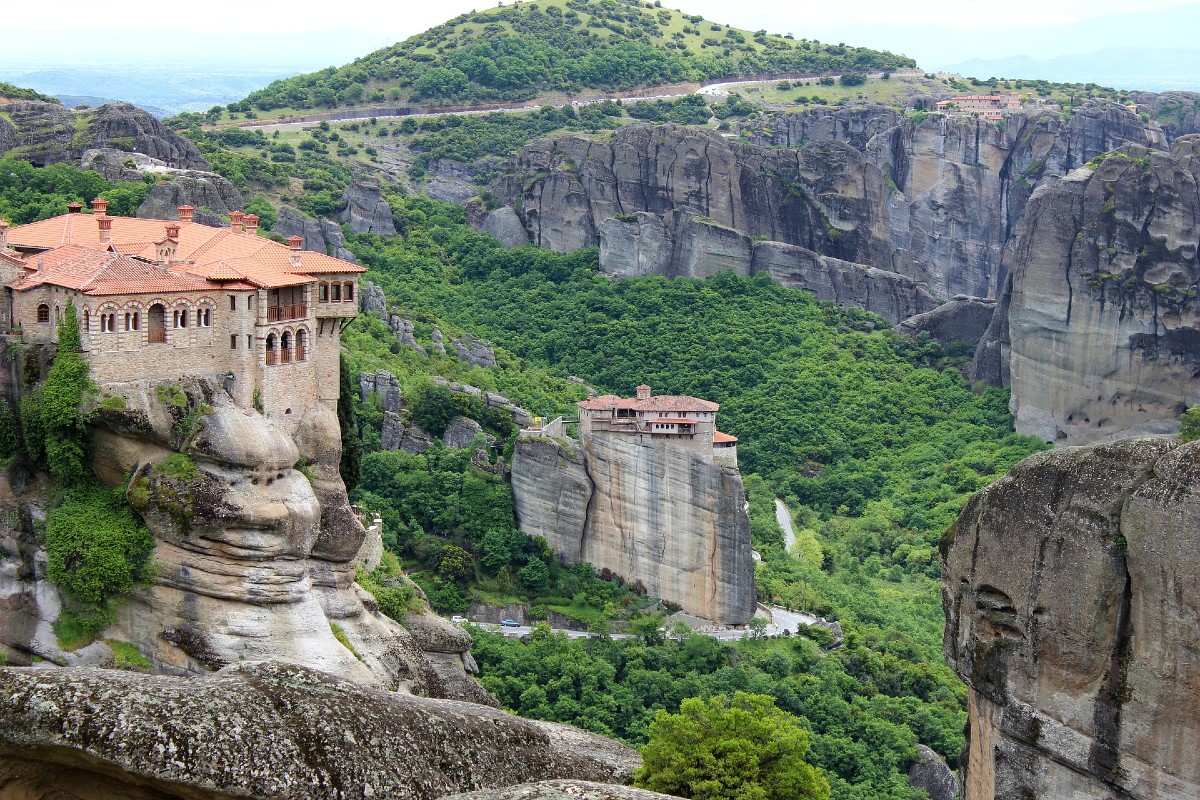 So what, you may say. There are many stunning rock formations all around the world.

That is true, but what makes Meteora so special is that, upon the weathered rocks, you can see several Orthodox monasteries. The monasteries look like they are suspended in the air, which is where their Greek name comes from.

Tip – there is at least one film that features Meteora. Find out which one in this article on movies about Greece.

It is likely that the first monks moved to Meteora in the 11th / 12th century. The biggest monastery is the monastery of Great Meteoron, which was established in 1356. In Greek, it is known as Moni Megalou Meteorou. 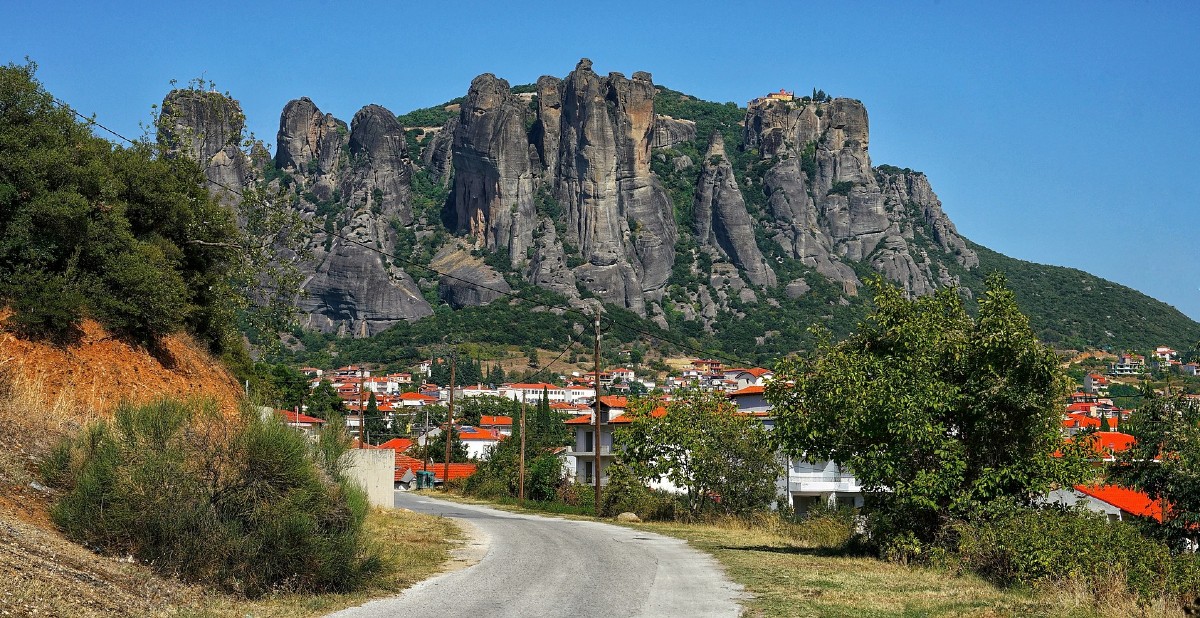 According to some sources, at least 30 monasteries were built all around Meteora over the centuries. Six of them, including the Great Meteoron, are still functioning today. All the others have closed down, and you can see some of the remains.

I find it very hard to imagine how the monks constructed the monasteries up on the massive rocks. For most people, living there would be impossible, which is what made the monks move there in the first place.

When the monasteries were built, the only way to access them was by ladders, ropes and hanging baskets. People who were interested in becoming monks had to be really determined. After all, their goal was to get away from the people and bring themselves closer to God. 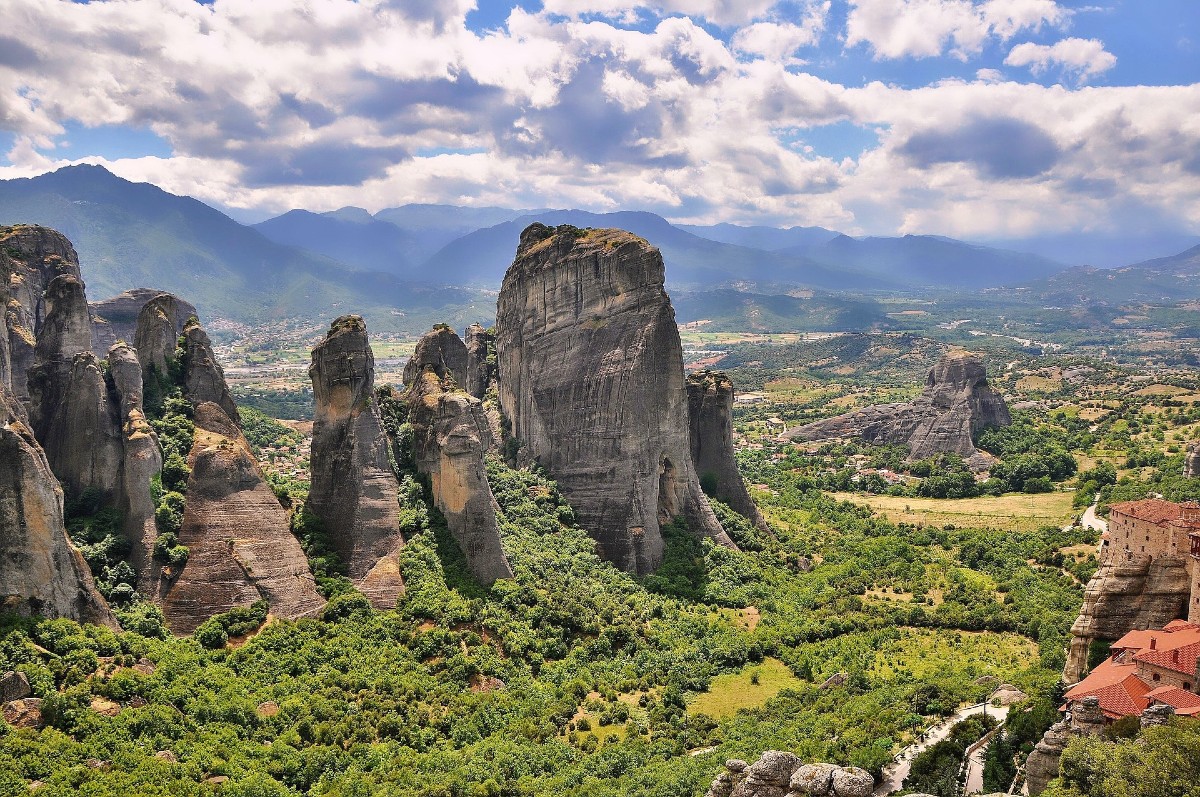 Once you’ve seen the monasteries with your own eyes, take a minute to visualize how difficult getting to a monastery must have been once. Can you imagine climbing up rope ladders and literally hanging out in the air?

It wasn’t until the 19th century that stairs were carved into the rocks, making access easier for everyone. If you are visiting Meteora monasteries today, you will need to climb up these steps – but trust us, it’s totally worth it. That said, the traditional basket method still exists!

Where is Meteora in Greece?

Meteora is in the Thessaly area of Greece, to the north of the country. The closest town to Meteora is Kalambaka, a 10-minute drive from the monasteries. 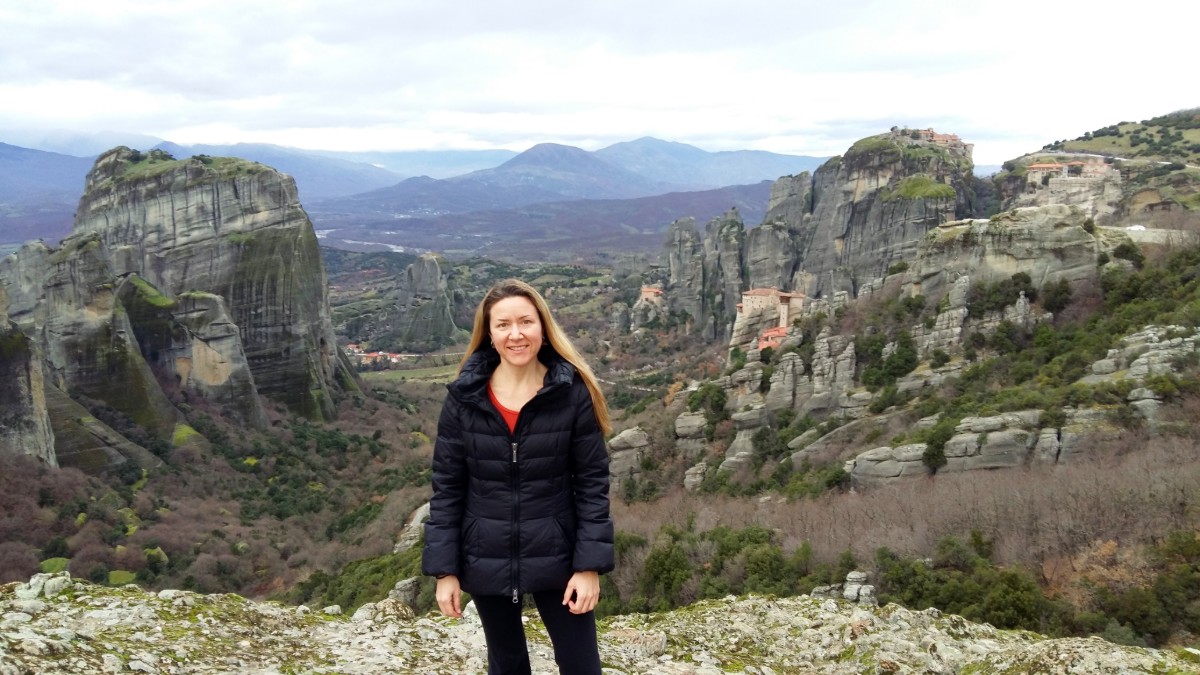 Kalambaka is 353 kms from Athens, 234 kms from Thessaloniki and 231 kms from Delphi. Understandably, visitors wonder if travelling to Meteora is worth the time. My answer – it definitely does!

In Kalambaka, you will find plenty of budget and upmarket accommodation options, restaurants and everything a visitor would need. In fact, the number of good tavernas is surprisingly high.

Meteora guide – Getting to Meteora from Athens

There are also several other trains, but you’d need to change trains at Paleofarsalos station. You can book your tickets either online, or at the station. Here is everything you need to know to book your train tickets in Greece. 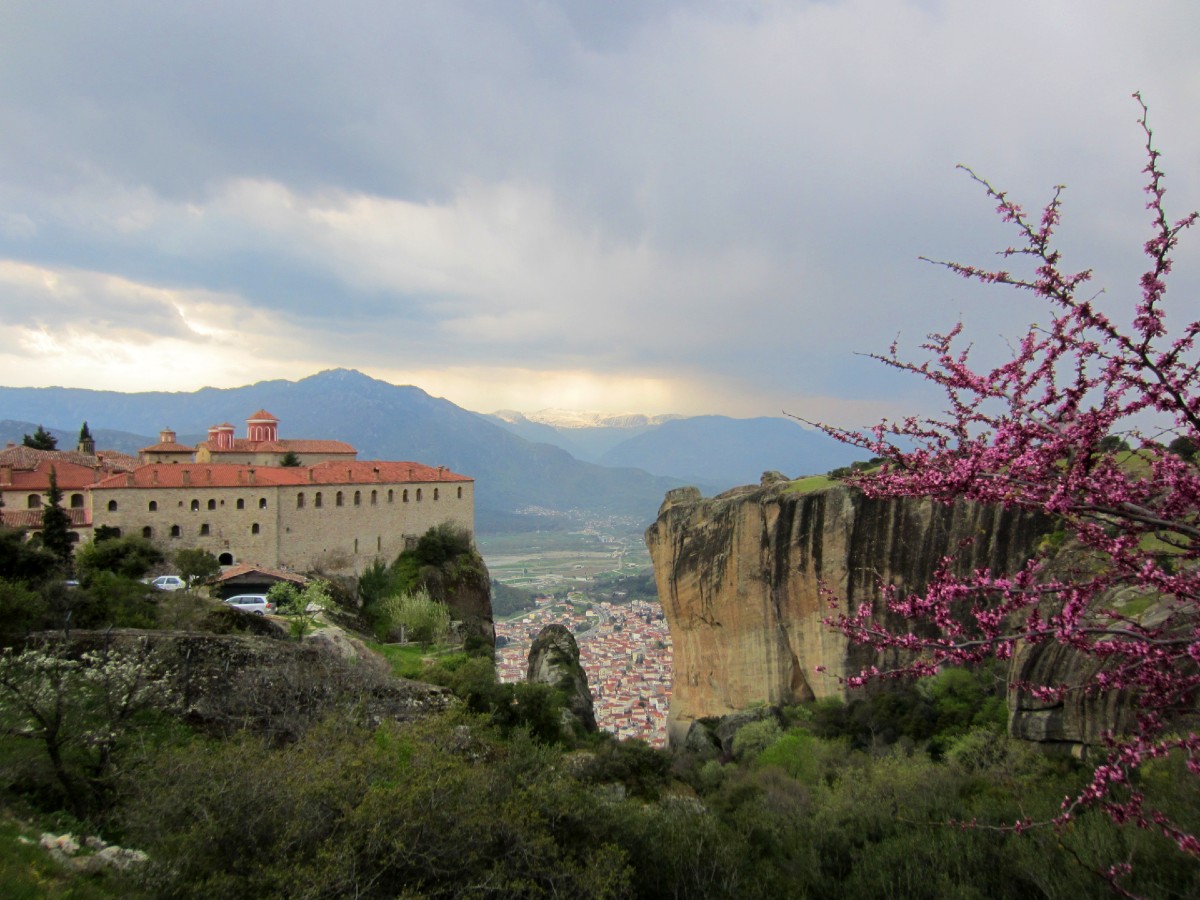 Many people ask if it’s possible to go on a day trip from Athens to Meteora. While technically it is possible, I strongly suggest that you allow at least a night in Kalambaka and absorb the unique ambiance and views.

If you take the train, you will have just under 6 hours to explore Meteora. Is it enough? Nowhere near. Is it worth it? If you are not planning to return to Greece anytime soon, Ι totally suggest that you visit Meteora.

If you are happy to drive in Greece, you could also consider renting a car from Athens. Then you can also drive around the monasteries. Check out DiscoverCars to get a quote and book a vehicle.

Getting around the Meteora Monasteries

The six functioning Meteora monasteries are quite close to each other. If you wanted to visit all the monasteries though, you would probably need some form of transportation, especially if you are pushed for time. 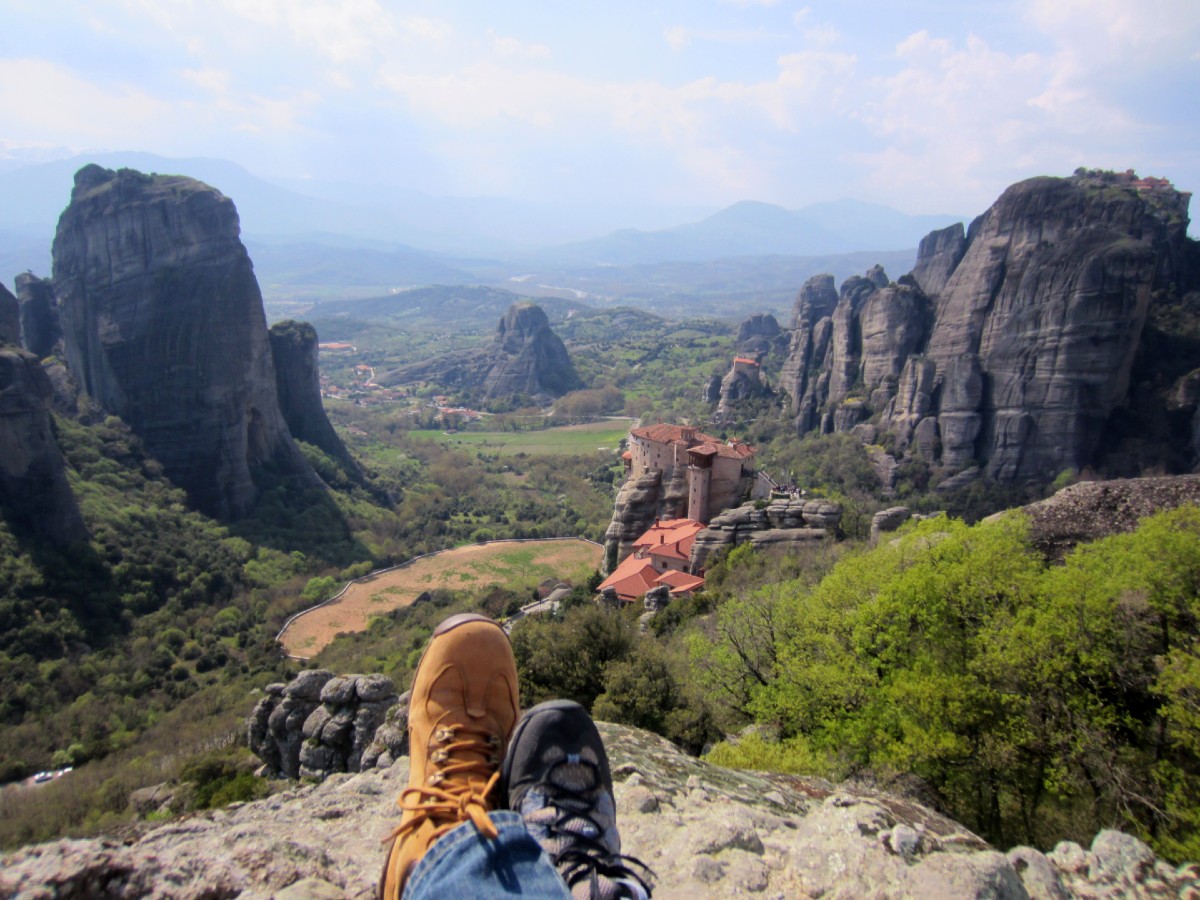 There are a few different ways to visit the monasteries from Kalambaka. If you came by train and are staying overnight, you can use the local bus. 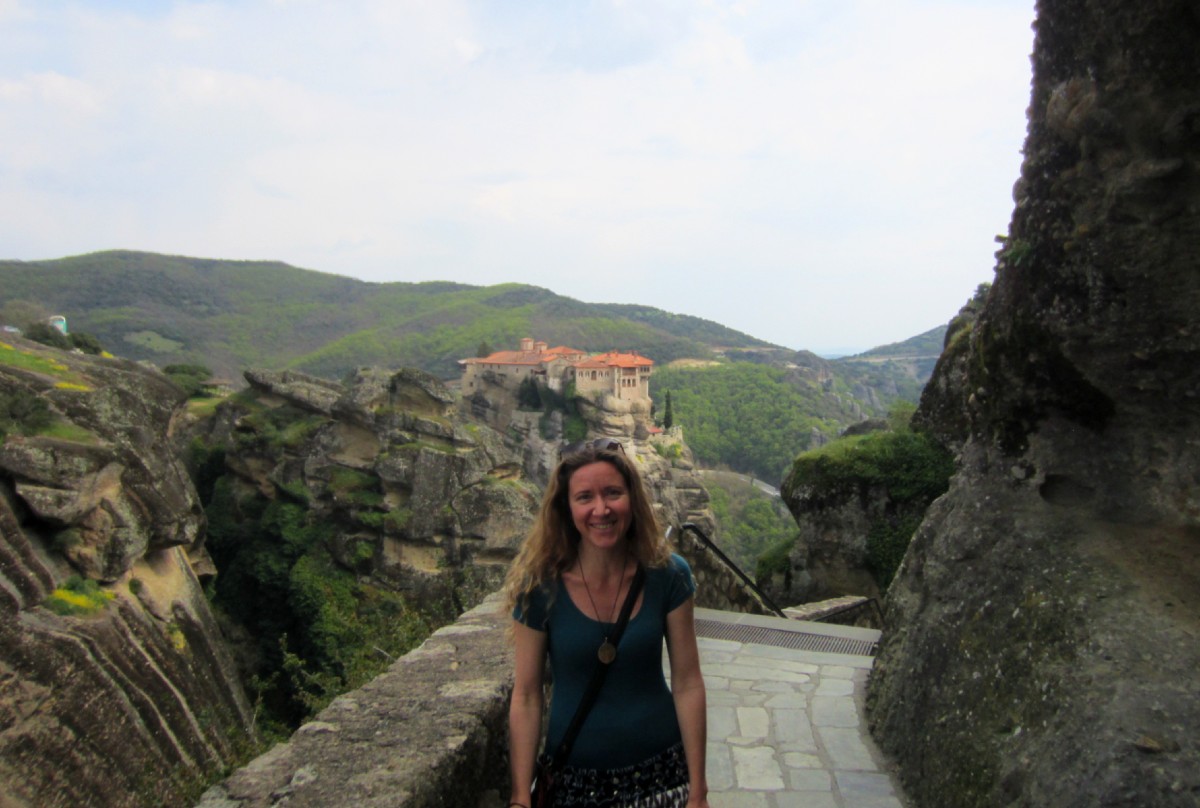 The bus takes 20-30 minutes to get from the town to the monasteries and vice versa, and tickets cost 1,80 euro. Updated bus timetables can be found here, or you can also ask your hotel.

An alternative way to see the area if you like the outdoors, is to hike. The area has some fantastic paths, and you will get to see the monasteries from some unusual spots.

You can probably hike on your own, but there are numerous guided hikes of the area as well. The total length of the hiking paths is about 40 kms, so if you like hiking make sure you spend more than 2 nights in Meteora. 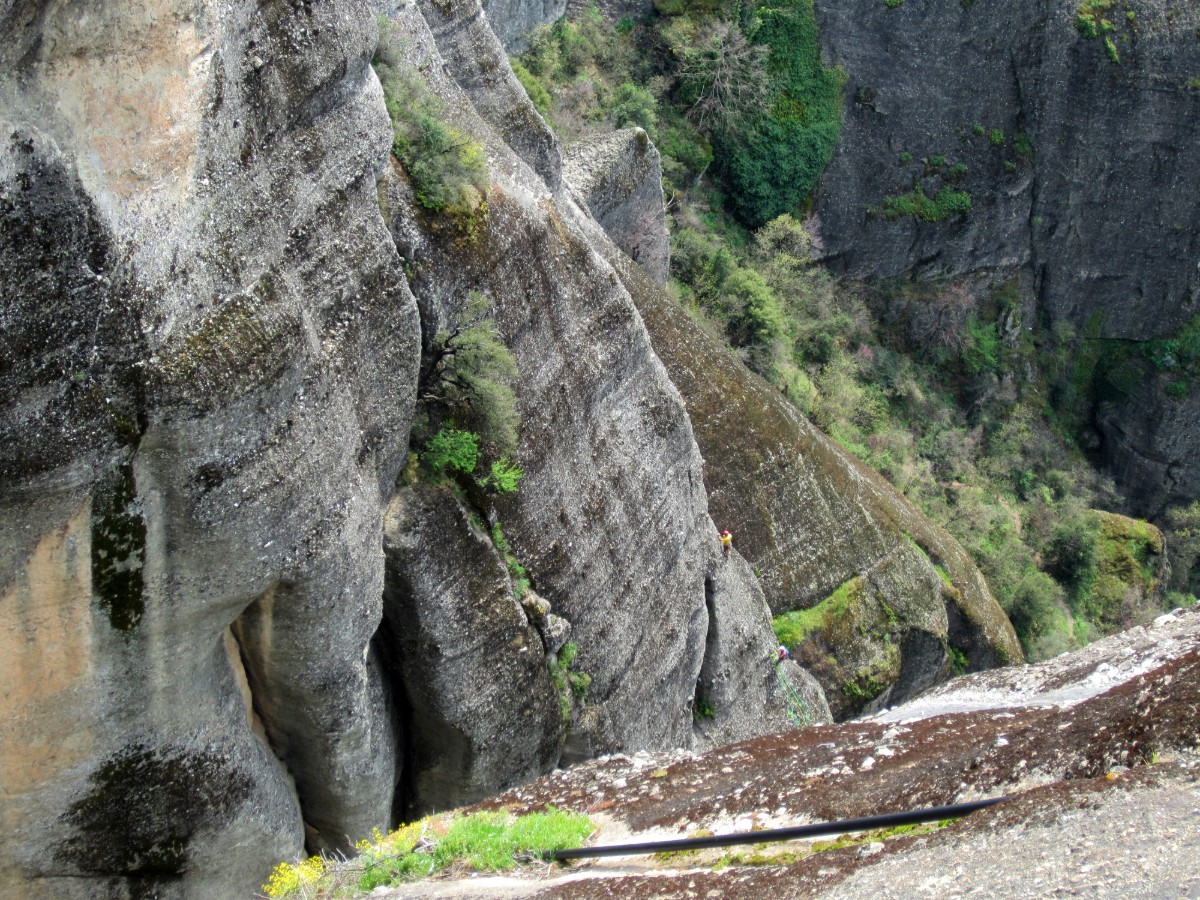 If you are not spending the night in Kalambaka, I recommend taking a guided tour of the Meteora monasteries in a van. The expert guides will take you around the monasteries and the best viewing points, and you won’t waste any of your precious time.

Today, there are six functioning monasteries in Meteora, and you can visit all of them. Each one has its own character, and if you have time and energy you could consider visiting them all. If you have mobility issues, do take into account the steps you will need to climb! 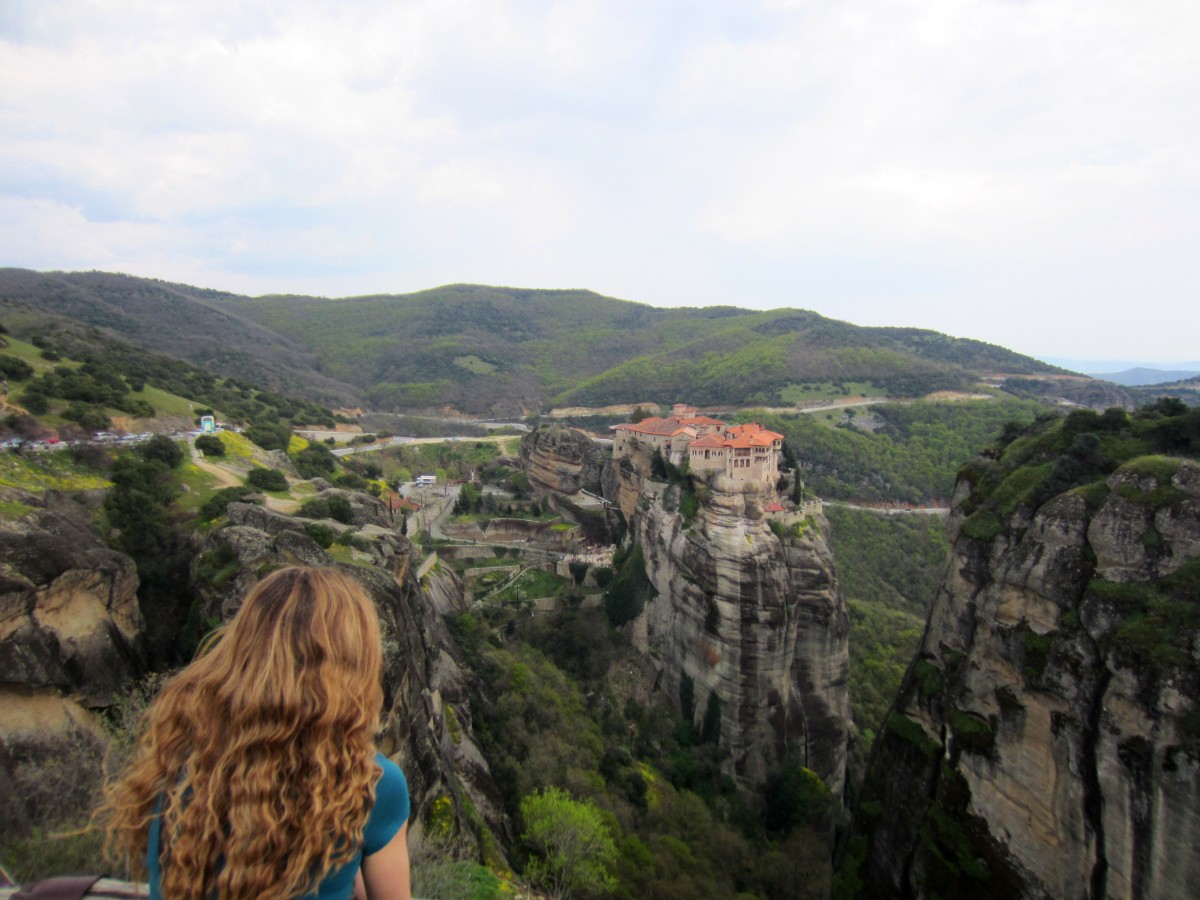 The biggest monastery is the Great Meteoron monastery. If you only have time for one monastery, make it this one, and allow a couple of hours to enjoy the monastery and the views. Take into account that there are a lot of stairs to get up there!

If you are interested in Orthodox art, definitely visit Varlaam monastery and Roussanou convent, where you will see some superb frescoes.

For people who are not sure if they can manage the stairs, the most easily accessible monastery is St Stephen’s nunnery, with beautiful views over Thessaly.

If you are feeling energetic though, climb all the way up to Holy Trinity / Agia Triada monastery, which is less visited and, in my experience, more quiet. 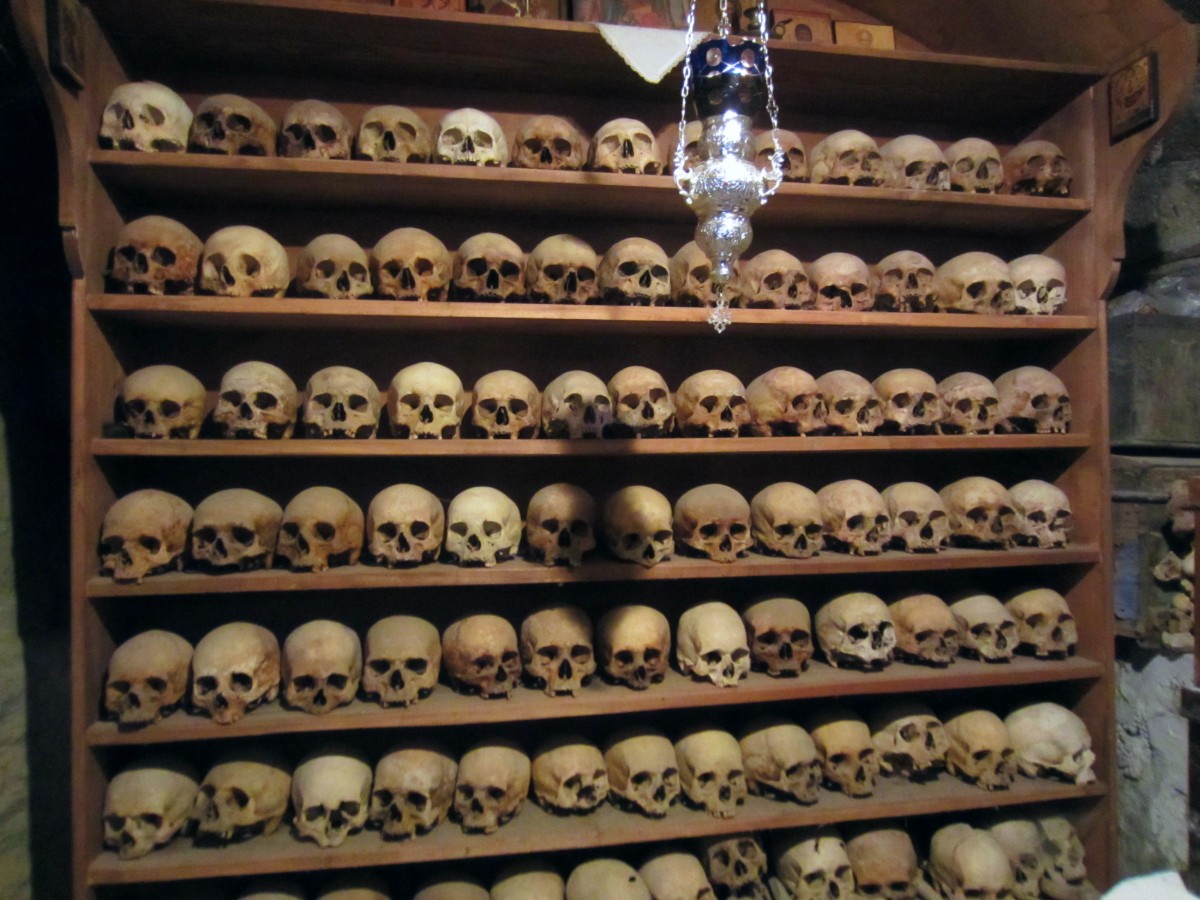 Finally, closer to Kalambaka, you will find Saint Nicholas Anapafsas monastery. This is a very narrow monastery, as it was built on a rather small rock surface. As a result, it’s split on several floors.

While the monasteries themselves are fascinating, take some time to admire the incredible landscapes and views. On a quiet day, when few other tourists are around, you will understand what made the monks want to live here!

Each one of the six monasteries is closed on one day a week in summer, and one or more in winter. Also, opening hours vary between the monasteries, and they are shorter in winter. Before you visit, make sure you check out the updated information, especially if you are interested in visiting a specific monastery. 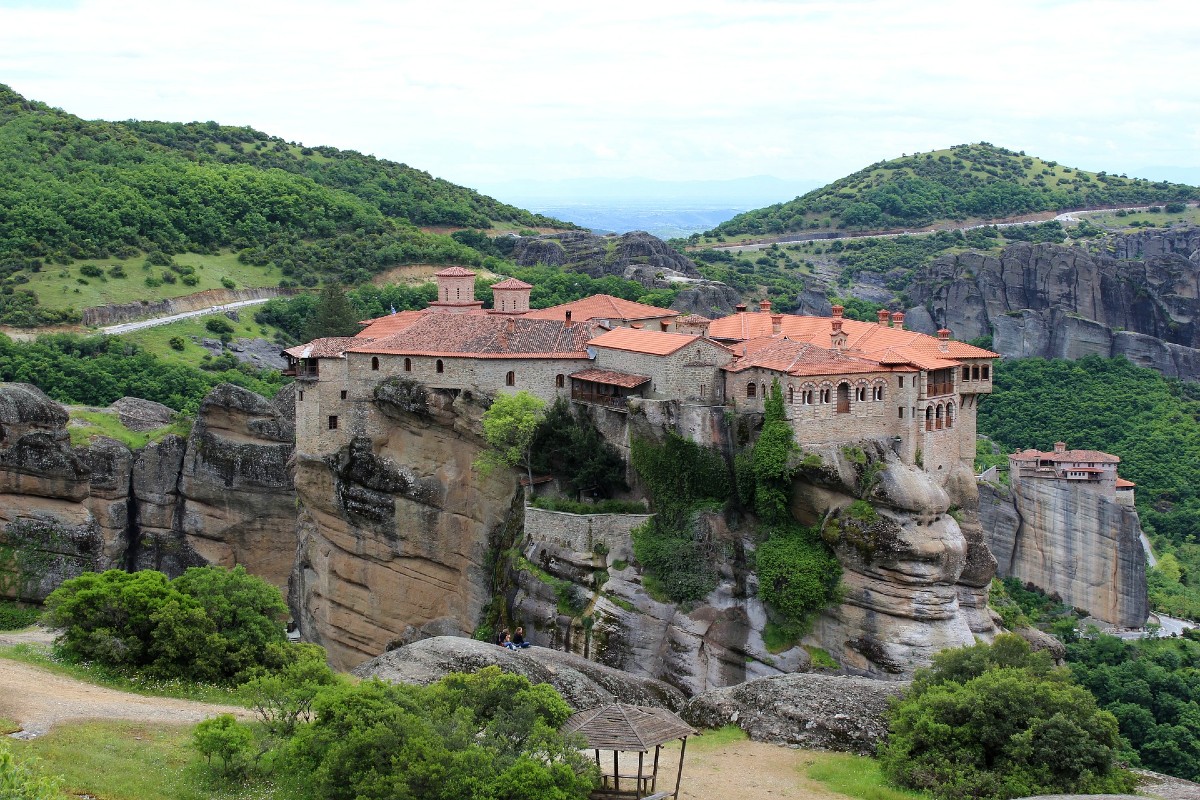 Please make sure you dress respectfully, and cover your knees and shoulders. Men should wear over-the-knee trousers, otherwise they will be refused entry. As for women, long skirts and shawls are available to borrow from each of the monasteries.

Meteora in Greece – A special place

I hope that I have convinced you that Meteora is a must-see destination in Greece. Even if you only have a week in Greece, try to allocate a night here. I promise that you will love it!

Hi! I am Vanessa from Athens, and I love helping people discover more about my country. I consider Meteora to be one of the most magical places in Greece. The monasteries, the landscapes, the setting, everything about them is just incredible! For more Greece-related news, follow my FB page and join my FB group. 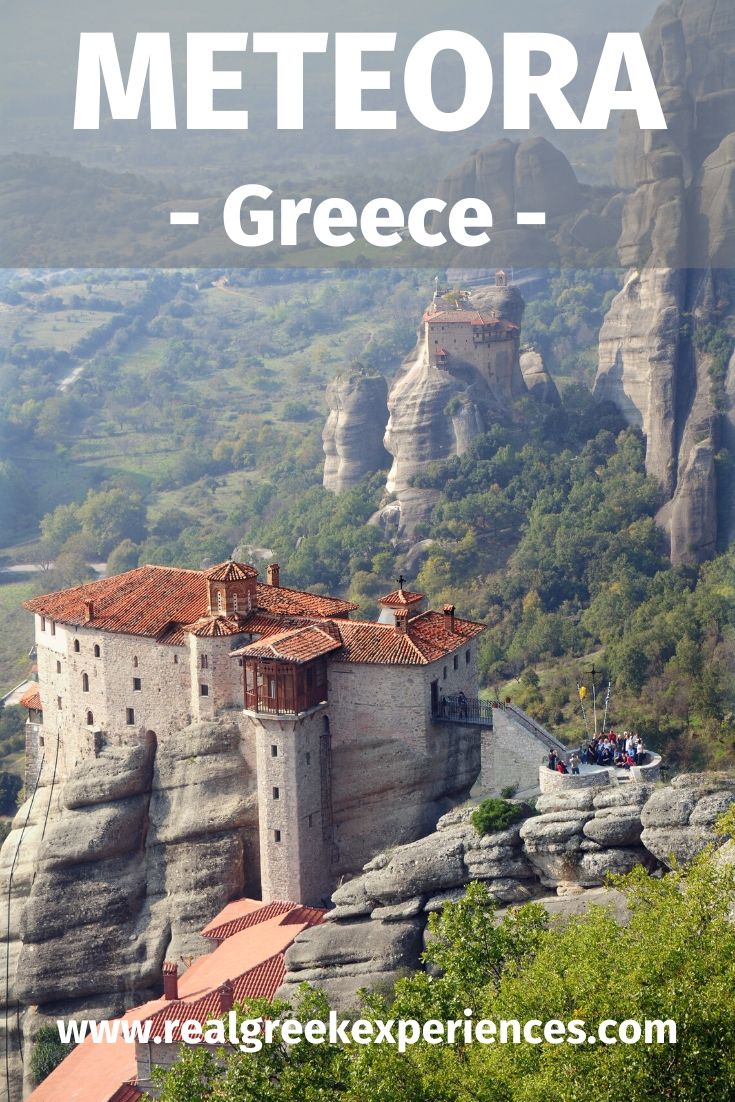