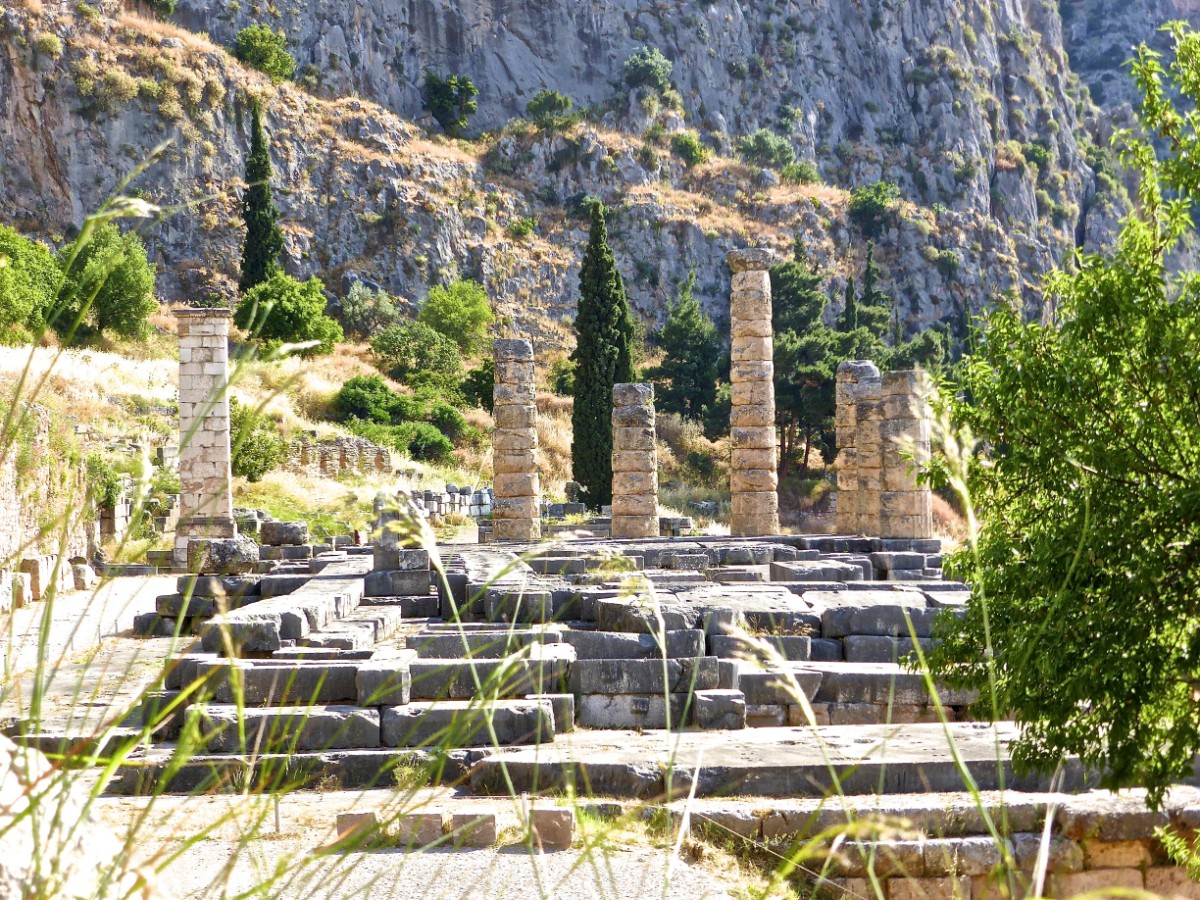 The archaeological site of Delphi in Greece was one of the most important places of the ancient world. Here’s everything you need to know about the magnificent UNESCO site, the fantastic Delphi museum and the mysterious Delphic oracle.

Few places in Greece are as special as the archaeological site of Delphi. The UNESCO cultural heritage site was once considered the centre of the Greek world.

Delphi is located on the Mount Parnassos, in the Regional Unit of Fokida, Central Greece. Sitting at an altitude of 550 metres, the site has a great view over the surrounding area. 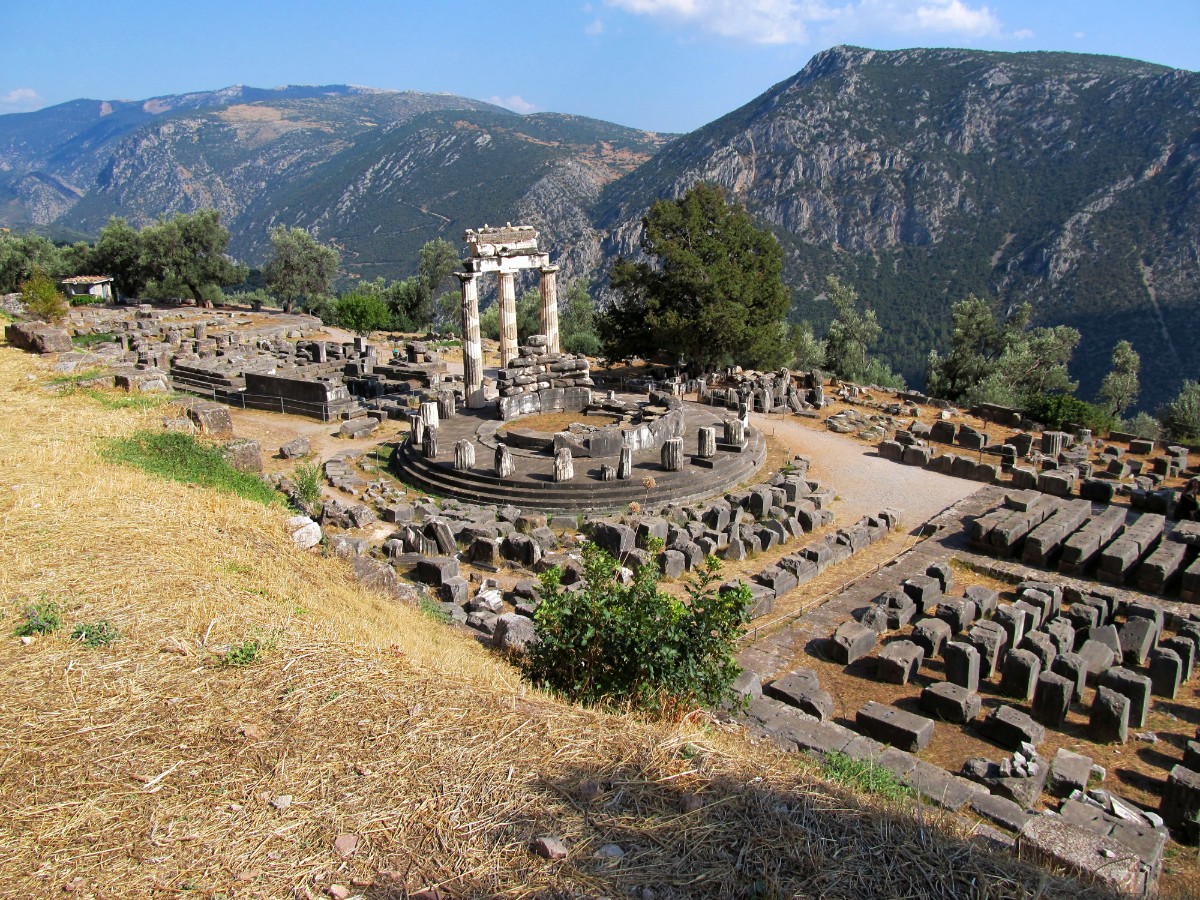 The magnificent natural setting, superb archaeological museum and proximity to Athens, make Delphi one of the most visited archaeological sites in Greece.

Given its incredible natural beauty, it’s not surprising that a few directors have chosen to include Ancient Delphi in their movies about Greece.

Let’s travel back to the ancient times, to see why Delphi was so important to the entire ancient civilization of Greece.

Delphi in the Ancient World

The site of Delphi was Ancient Greece’s most sacred place. It was considered to be the navel (omfalós) of the earth, the center of the then known world.

According to legend, Zeus, the king of the 12 Olympian gods, released two eagles, and let them fly free. One of the eagles left from the Far East, and the other from the Far West. 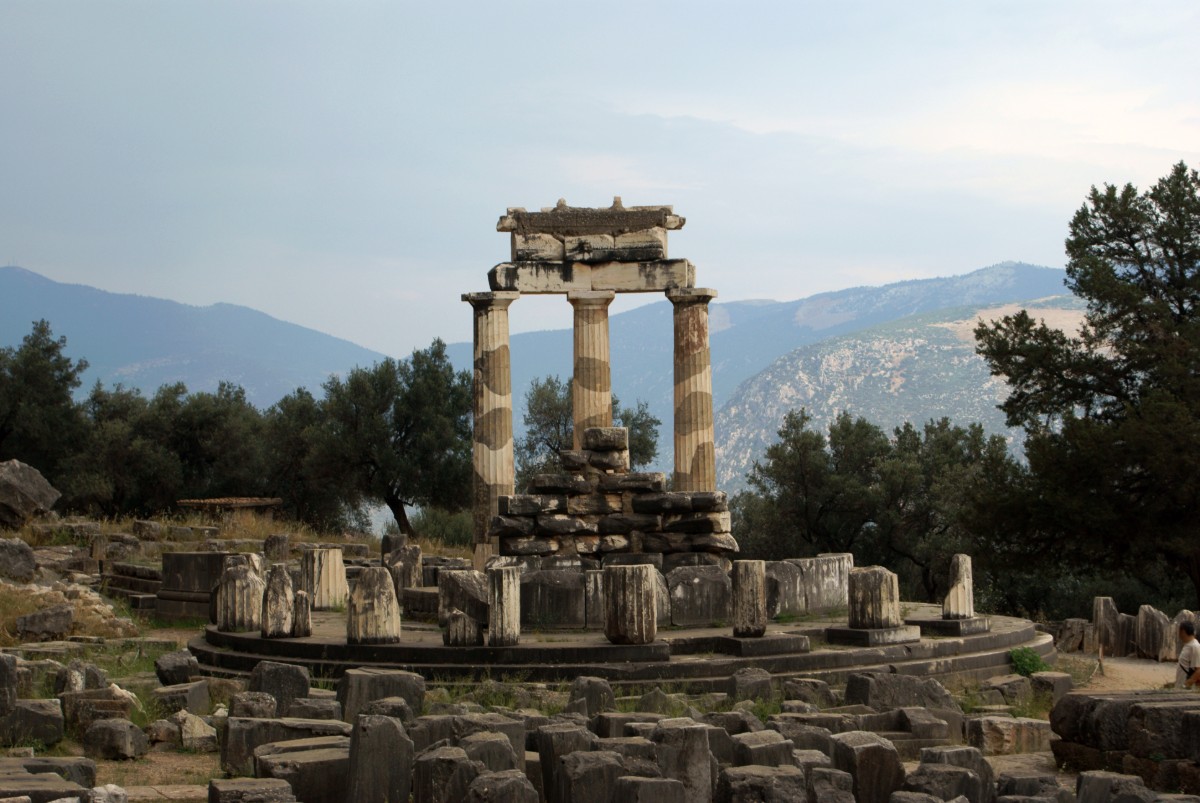 After flying for a long time, the two eagles met over Delphi. The site was then proclaimed the most important place in the ancient world.

The oldest findings from the wider area of Delphi date from the Neolithic Era, around 4,000 BC. Many of them were discovered in the nearby Corycian Cave, known in Greek as the Korykeion Antron.

This is a cave on Mount Parnassus where ancient rituals took place. It was likely a place of worship for the God Panas as well as the Corycian Nymphs.

Archaeologists have excavated numerous artefacts, indicating the presence of a settlement and cemetery from the Mycenaean period.

The majority of the artefacts found around the ancient site date from the 8th century BC onwards. This is when the cults of certain ancient gods, including Apollo and Athena, were established in the area.

Apollo and the Site of Delphi in Ancient Greece

The first temple built in Delphi was the sanctuary of the ancient Goddess Earth. It was guarded by Mother Earth’s son, a fierce, monstrous snake called Python. 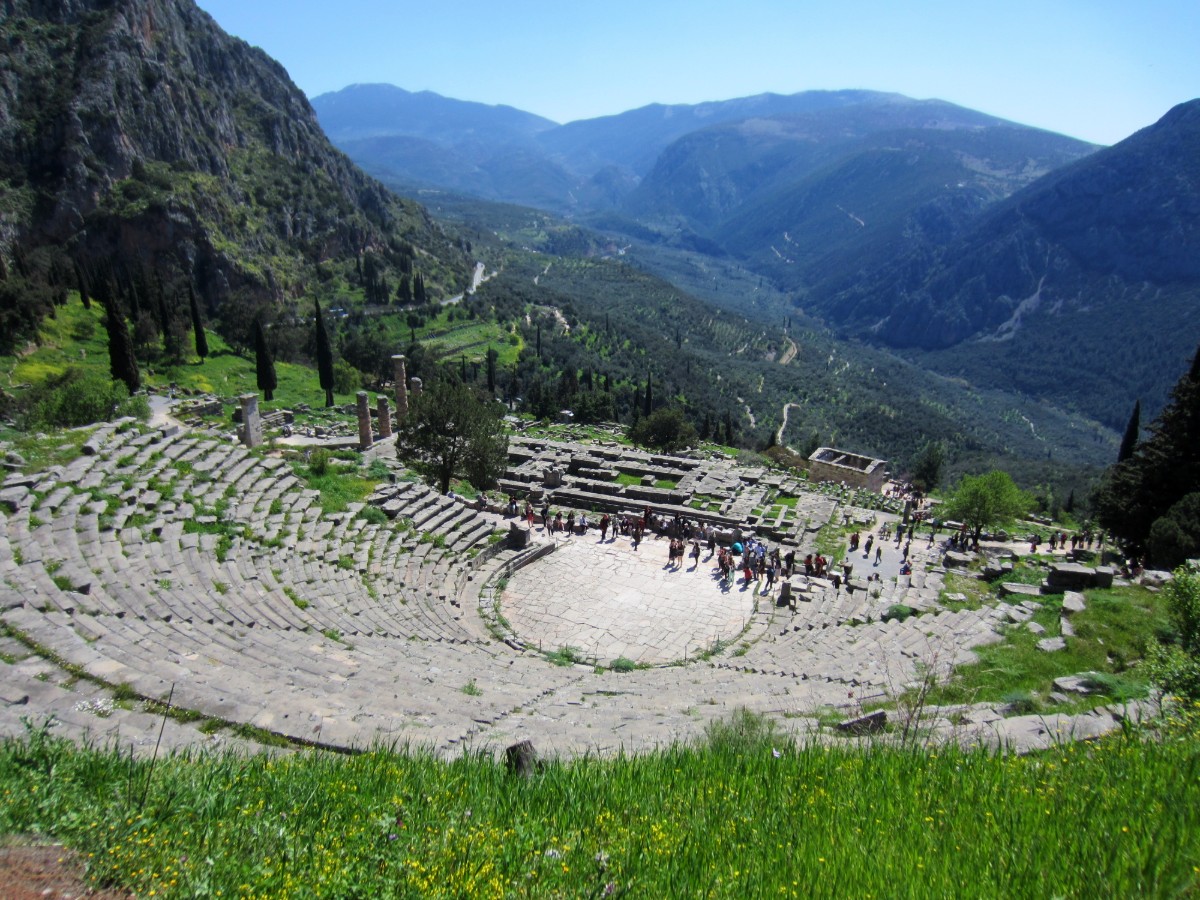 God Apollo was the son of Zeus, and one of the twelve Olympian Gods. He was the god of Light, Grace, Music and Arts, and is usually depicted as a fair, handsome young man.

One day, God Apollo left Olympus aiming to destroy Python and conquer this beautiful, sacred land. In a symbolic gesture of eliminating all ancient, primitive instincts, he killed the gruesome serpent.

After killing Python, Apollo was self-exiled, in order to purify himself of the murder.

The temple of Apollo in Delphi

When his self-exile period was over, Apollo disguised himself as a dolphin, and returned to Delphi. On his way, he met a ship led by Cretan sailors, who followed along.

Upon arrival at Kirrha port, close to Delphi, the sailors built a temple to honour Apollo and became his priests. Apollo was pronounced protector of Delphi, and Zeus cast a massive stone right on the spot where Python was killed. 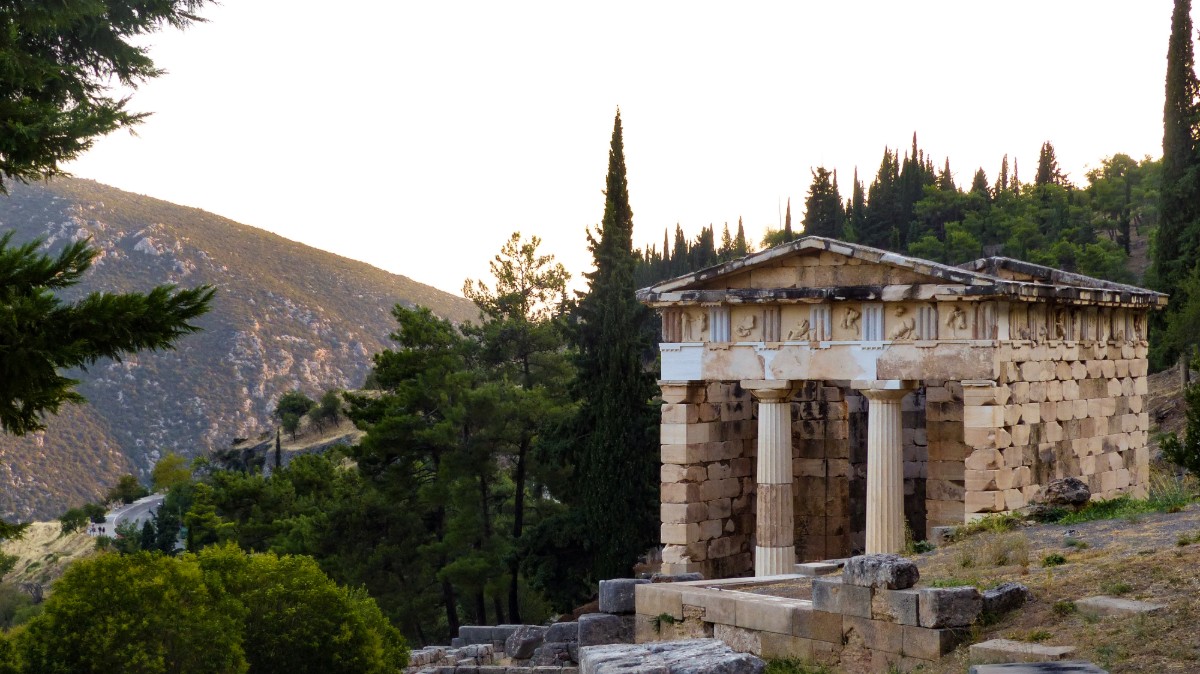 Apollo’s cult became prominent in the 8th – 7th century BC. This was the time when Apollo’s Sanctuary in Delphi was founded, and when the Oracle first appeared.

Later on, Delphi became the most important religious centre and a symbol of unity in Ancient Greece.

During winter months, Apollo left Delphi and emigrated to North Europe. According to legend, he spent that time with the mythical tribe of the Hyperboreans.

Apollo was a popular god all around Ancient Greece. Temples of Apollo exist in many more regions, such as Ancient Delos and Ancient Epidaurus.

The Oracles in the ancient classical world

Oracles were very popular in Ancient Greece. They were high priests and priestesses with special powers. Their mission was to relay the messages of the gods to the mortals. 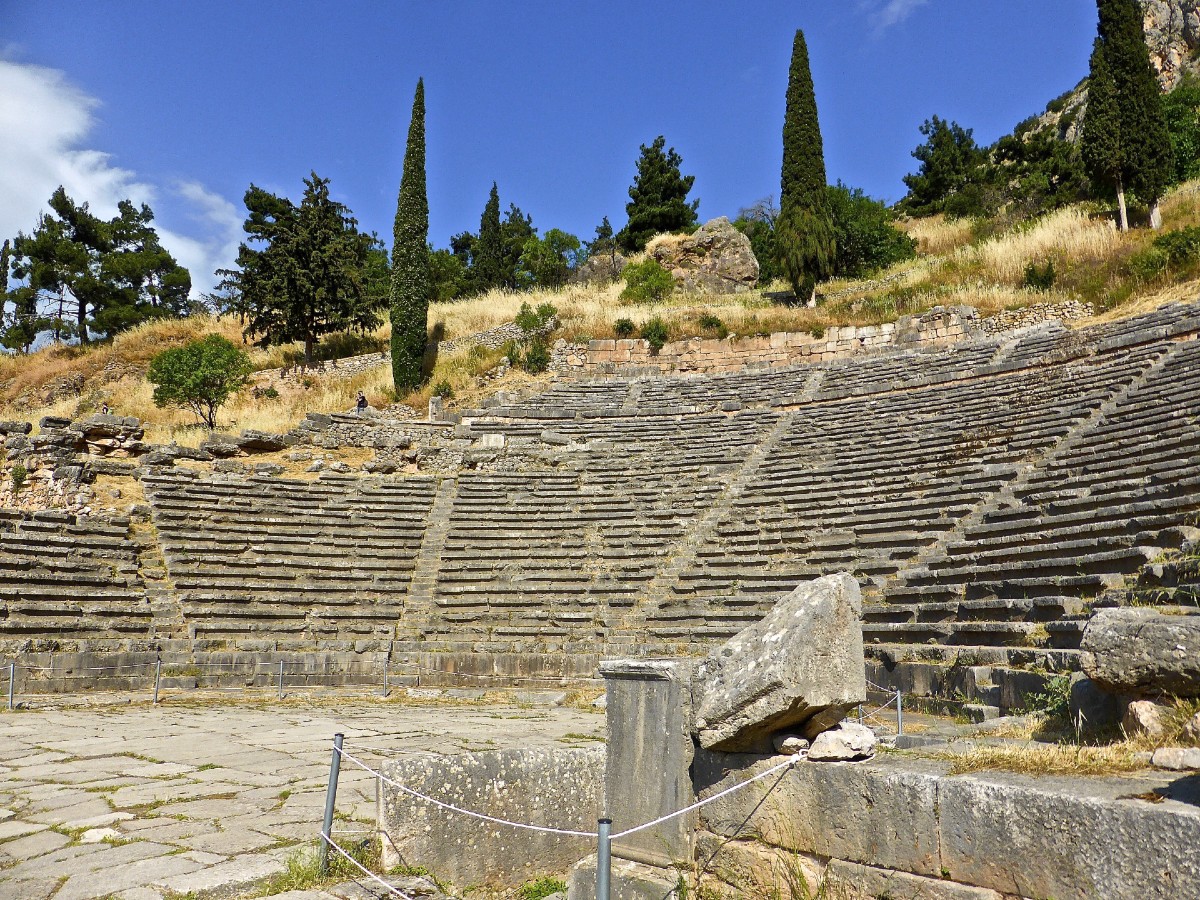 Usually, the oracles conveyed the messages in a mysterious, ambivalent manner, which was open to interpretation.

The Delphic Oracle was always a woman, known as Pythia. People consulted her before important decisions regarding marriage, war, or settling new colonies.

Pythia, the most famous oracle

Pythia was the most reliable Oracle in Ancient Greece. People visited from all the Greek cities and Greek colonies around the world, to consult the high priestess.

The Oracle had to follow a certain ritual before giving a prophecy. She first took a bath, drank water from the nearby sacred spring of Kastalia, and chewed on bay leaves.

She then sat on a tripod in the adyton, an off-limits room inside the temple of Apollo. This is where she inhaled an ecstasy-inducing smoke, which was likely produced by burning certain hallucinogenic plants along with methane.

Pythia delivered her prophecies while she was in a state of euphoria, or ecstasy. The priests would then interpret her dubious and ambiguous messages. 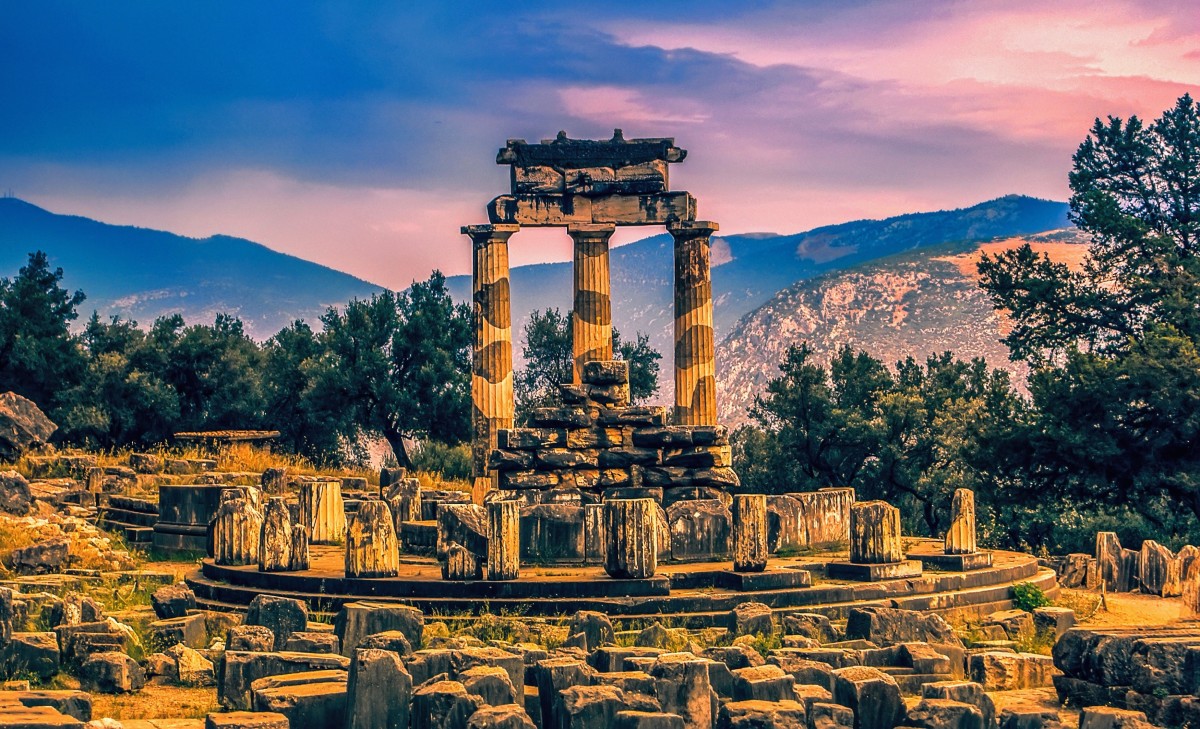 Given Apollo’s absence in winter, Pythia was only available in spring, summer and autumn. She delivered her prophecies just on one day per month.

The importance of the Oracle among Ancient Greeks

The importance of the Oracle in Delphi reached its peak between the 6th and 4th centuries BC.

Pythia’s powers diminished during the Roman period, after the 3rd century BC. However, the rituals continued for several centuries.

During the 4th century AD, the Byzantine emperor Theodosius terminated the Oracle. Like many other ancient sites in Greece, the great pan hellenic sanctuary fell into disuse.

Games and festivals in Ancient Delphi

Apart from being home to the Ancient Sanctuary of Apollo and the Oracle, Delphi served numerous other purposes.

Although the site was primarily dedicated to Apollo, other gods were also worshipped in the area. These include Apollo’s sister Artemis, Athena, Zeus, Poseidon, Hermes and Dionysus.

Several cultural events and athletic games took place in this beautiful area of Greece. The most famous festival was the Pythian Games, celebrating the death of Python. 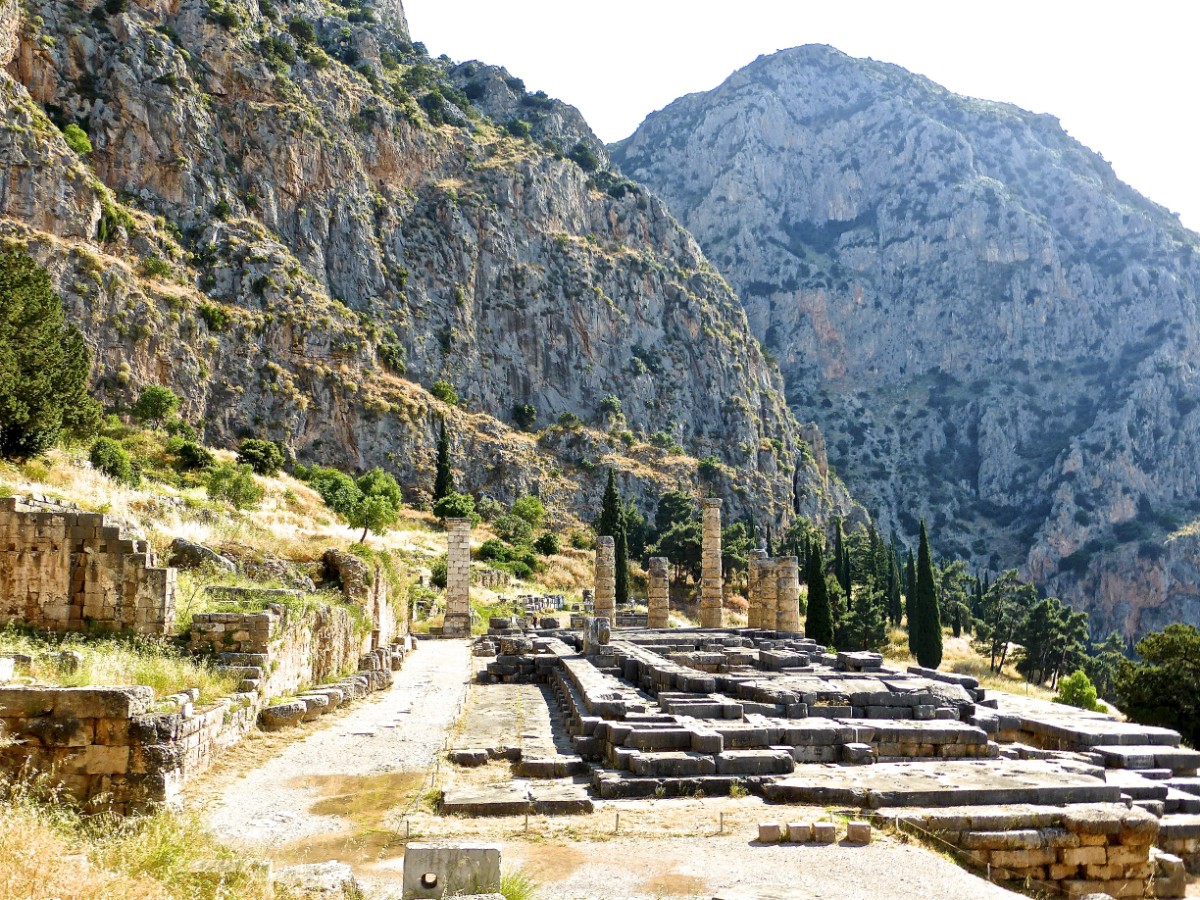 The Pythian Games included several athletic competitions, as well as musical and theatrical events, to honour Apollo. They were organized every four years, and were second in importance only to the Olympic Games.

Pausanias, the great geographer, visited Delphi in the 2nd century AD and described the site in great detail.

The Archaeological Site of Delphi today

Excavations in the area of Delphi began in the 19th century. They were initially undertaken by German archaeologists, and later by the French school in Athens.

The statues, inscriptions and other artifacts which have been discovered, offer great insights on life in Ancient Greece. 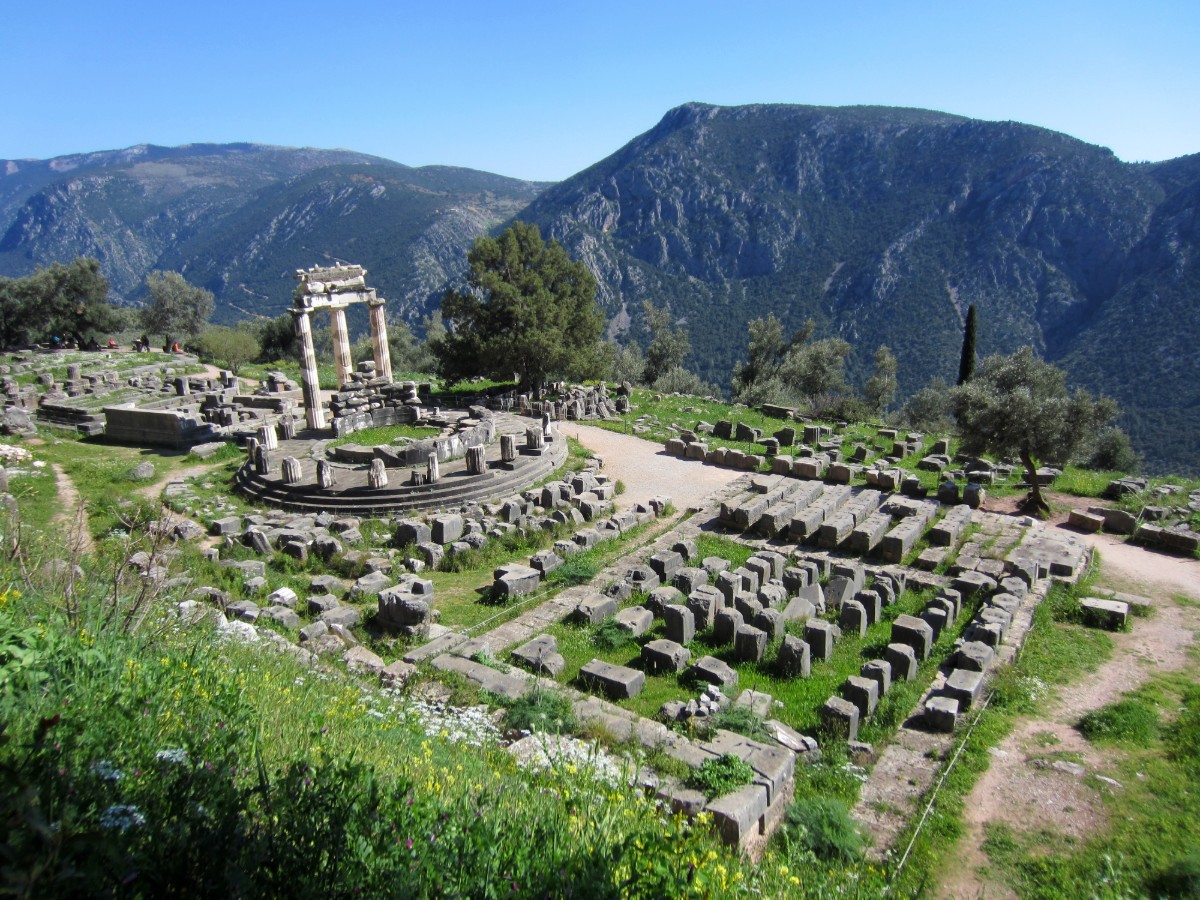 Today, visitors can see the remains of temples and most prominent edifices, many of which have been partially restored. They can also visit the superb archaeological museum, where hundreds of artifacts are exhibited.

Main buildings in the site of Delphi

Visitors will follow the Sacred Way, a winding path leading to the temple of Apollo. After its construction, the temple was rebuilt and restructured numerous times. The version we see today dates from 330 BC.

The Delphic maxims, that sum up physical and moral values of the times, were inscribed on the temple’s walls.

Another important building is the Athenian Treasury. It was built after the battle of Marathon, as a place to store ornate treasuries and other precious objects retrieved after the battle.

(Note: Here is some more info about the battle and the Athens Classic Marathon).

The iconic theatre of Delphi hosted the drama and music competitions of the Pythian Games. Like other ancient theatres in Greece, it was also used for public gatherings.

Scattered around the site, you can also see remains of the original settlement, altars and cemeteries of the religious center of Delphi.

One of my favourite spots is the Delphi stadium, on the top of the hill. Climbing up might be a bit of a challenge, especially on a hot summer day, but the views of the surrounding mountains from up the top are really worth it. 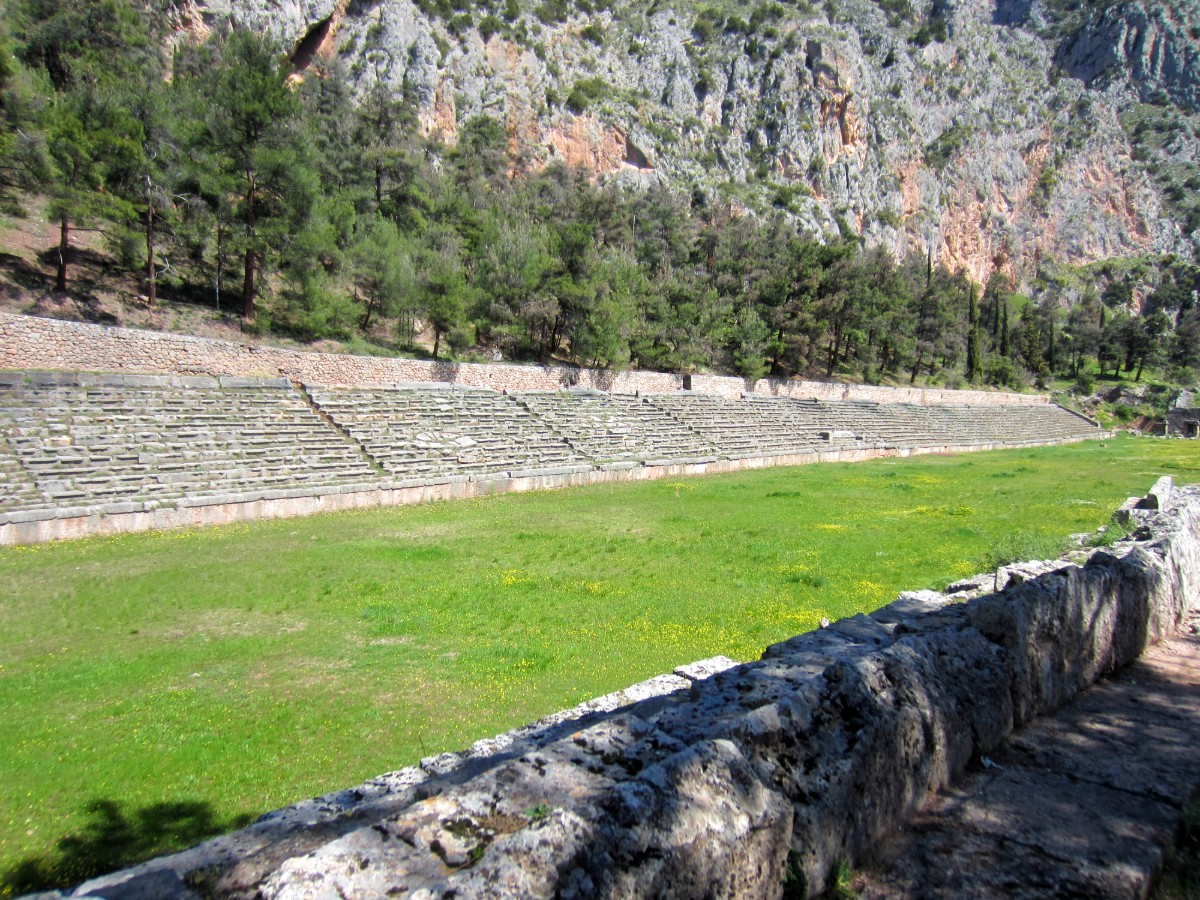 Across the street from the main site, you can visit the Athena Pronaia sanctuary. Not everyone makes it here, and it’s a shame, as it’s really impressive!

More information about the individual monuments is available on the official website of the archaeological site of Delphi.

The archaeological museum of Delphi is one of the most important museums in Greece, and has recently been refurbished to high standards.

Visitors will see sculptures, statues and other artifacts, showcasing life in the wider area of Delphi since Apollo’s cult was established. 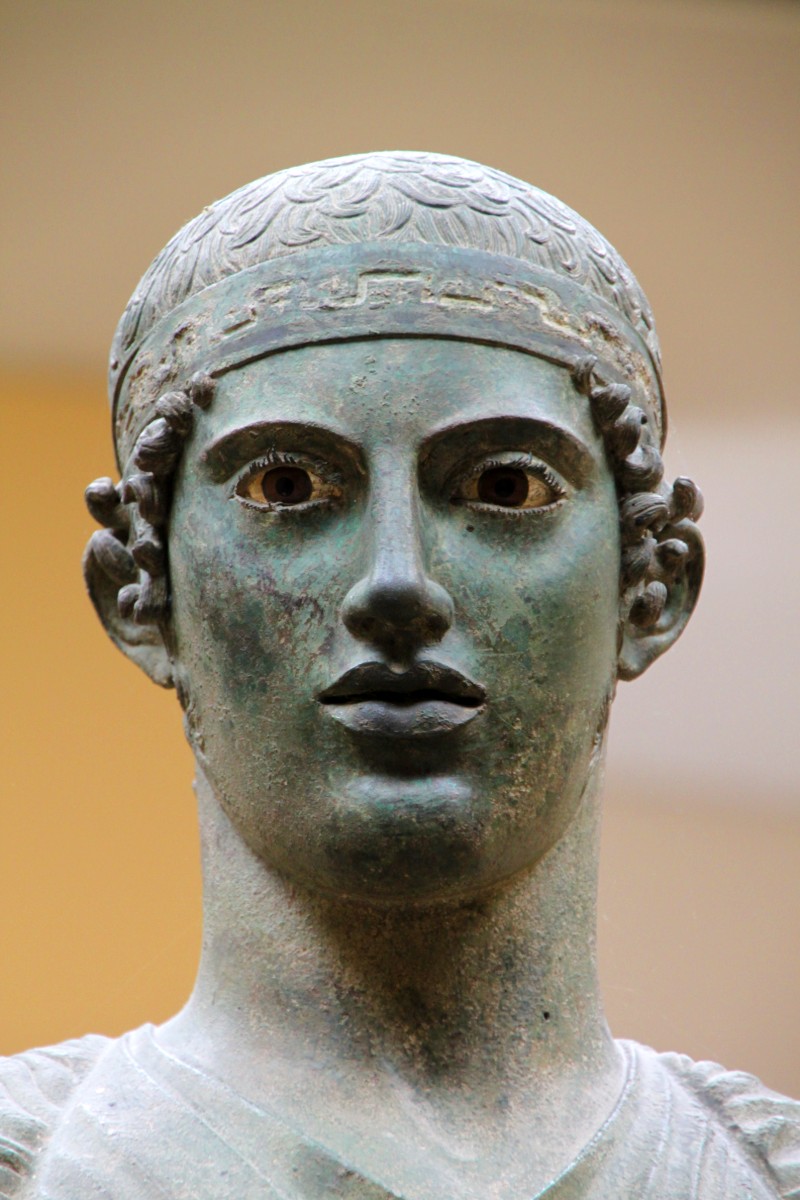 Among its most famous exhibits is the Charioteer of Delphi, one of the finest bronze statues ever made in Greece. You can also see a fantastic collection of gold and ivory statues and other objects.

The archaeological site of Delphi is around 190 kms (118 miles) from the Greek capital. This makes it the perfect day trip from Athens.

It is easy to get to Delphi independently by rental car. You can check prices and book your holiday vehicle at DiscoverCars.

You can also take the public KTEL bus. There are several buses a day, and if you are going for a day trip you should try to catch the first bus of the day. It will take you around 3 hours to get to Delphi from Athens.

If you are have enough time, you can also stay overnight in the small village of Arachova. It is much more picturesque than Delphi itself.

Allow about 4 hours to see the whole site and the museum, including the temple of Athena Pronaia across the road.

If you are visiting in summer, bring with you a large bottle of water, a hat, sunglasses and sunscreen. Avoid the hottest hours of the day if you can. Here are some more tips on how to stay cool in summer.

People who prefer to have a guided tour of the archaeological site and the museum, can also join an organized tour to Delphi.

There are numerous companies offering this tour, often combining it with an onward trip to the magnificent Meteora monasteries.

In fact, even if you go independently, you could consider taking a guided tour, or even an audio tour of this incredible site.

During the year, there are a few free entrance days, which you can benefit from: 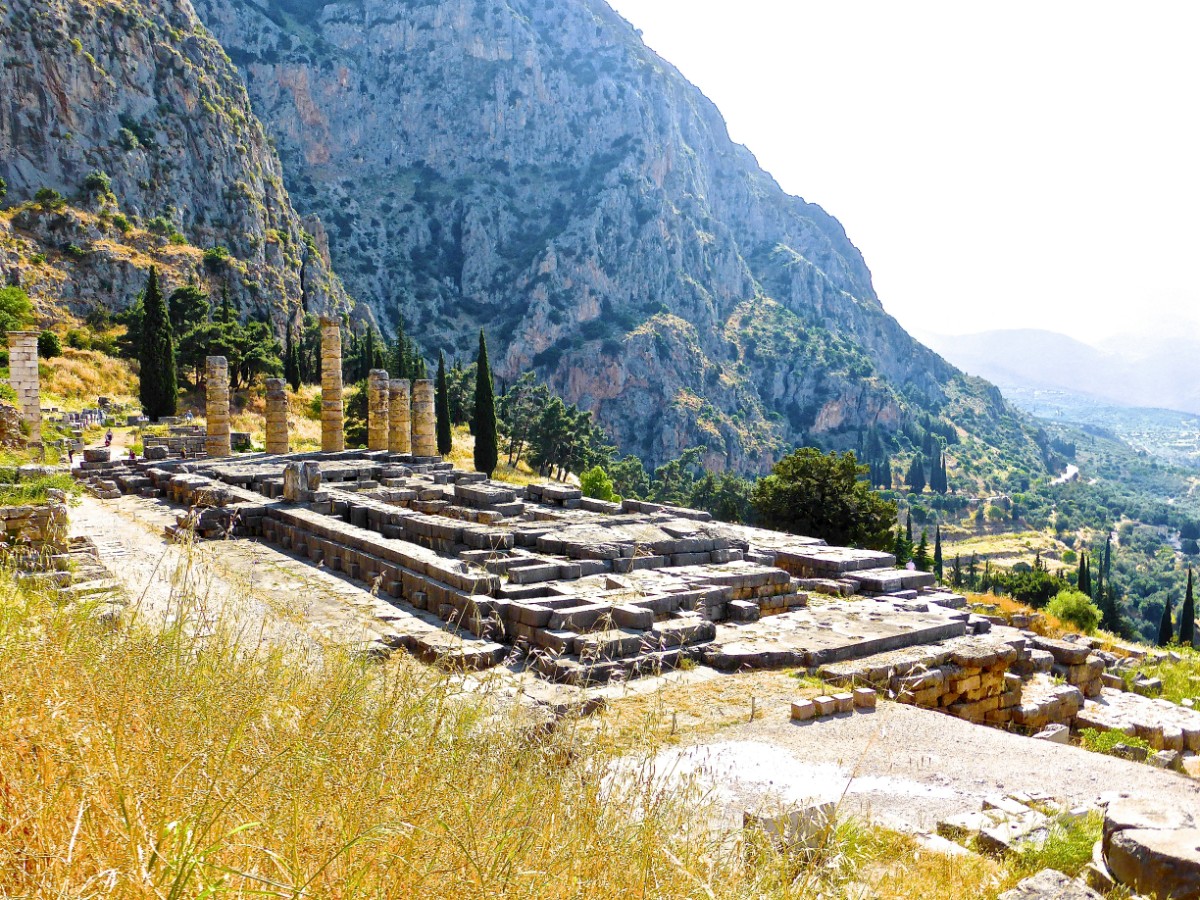 Where is the site of Delphi?

The archaeological site of Delphi is located in the regional unit of Fokida in Central Greece, about 3 hours away from Athens.

What is the most sacred site of Delphi?

The focal point in Delphi was the grand temple of Apollo, dedicated to the God of light. Here is where the Delphic Oracle, Pythia, delivered her prophecies.

What is the Delphi famous for?

Delphi was the center of the ancient Greek world. The site was home to the Delphic oracle, Pythia, a high priestess of Apollo who was famous for her ambiguous prophecies. She was the most powerful oracle in ancient Greece.

Does the Oracle of Delphi still exist?

No, the Oracle of Delphi was terminated in the 4th century AD. However, when you visit today you will instantly notice the special energy of the area!

Is Delphi worth visiting?

Absolutely. Delphi is among the most important ancient sites in Greece, and its location is just stunning. You can easily visit Delphi, either on your own or with a tour, on a day trip from Athens.

I hope you have enjoyed this article about Ancient Delphi! You might also be interested in these other articles about Greece:

Hi! I’m Vanessa from Athens, and I like helping visitors find out more about my country. I’ve been fortunate to have visited Delphi in Greece several times, and absolutely love the setting and ambiance of the area. Feel free to like my FB page for more Greece-related info and news.