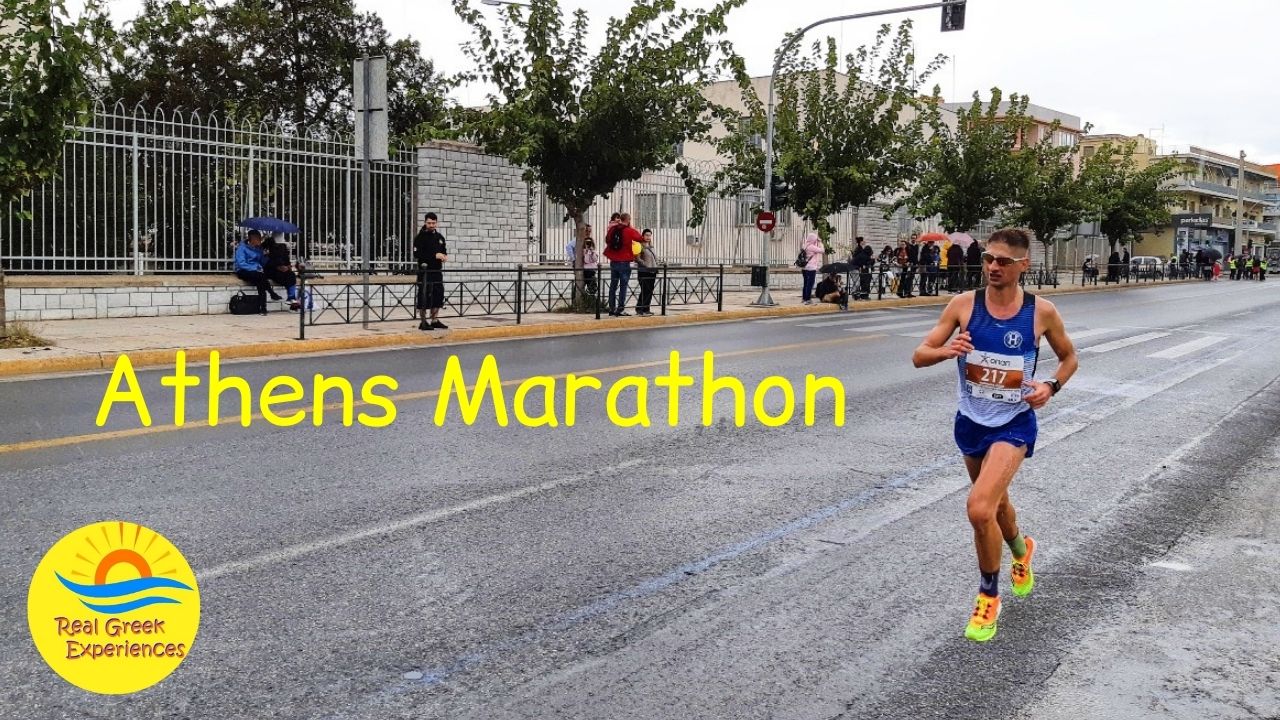 The Athens Original Marathon is unlike any other competitive race in the world. This November (Sunday 13th), thousands of athletes follow the route from Marathon town all the way into central Athens. Here is what to expect if you are in Athens Greece.

On Sunday 13th November 2022, the Classic Athens Marathon will take place in Athens, the Greek capital. It is a popular event, attracting thousands of participants and spectators.

The route begins at the small town of Marathon, which is how the iconic race gained its name. The finishing point is inside the Panathenaic Stadium, in Athens city centre. The length of the route is exactly 42.195 kilometres, or 26.2 miles.

The Athens Marathon began in the 5th century BC

So what’s the story behind the Authentic Athens Marathon? Let’s go back to the times of Ancient Athens and find out.

In the early 5th century BC, a few years before the Golden Age of Pericles, the Persian Empire attacked the Greek city-states. These wars, known as the Greco-Persian Wars, began during the reign of King Darius I. 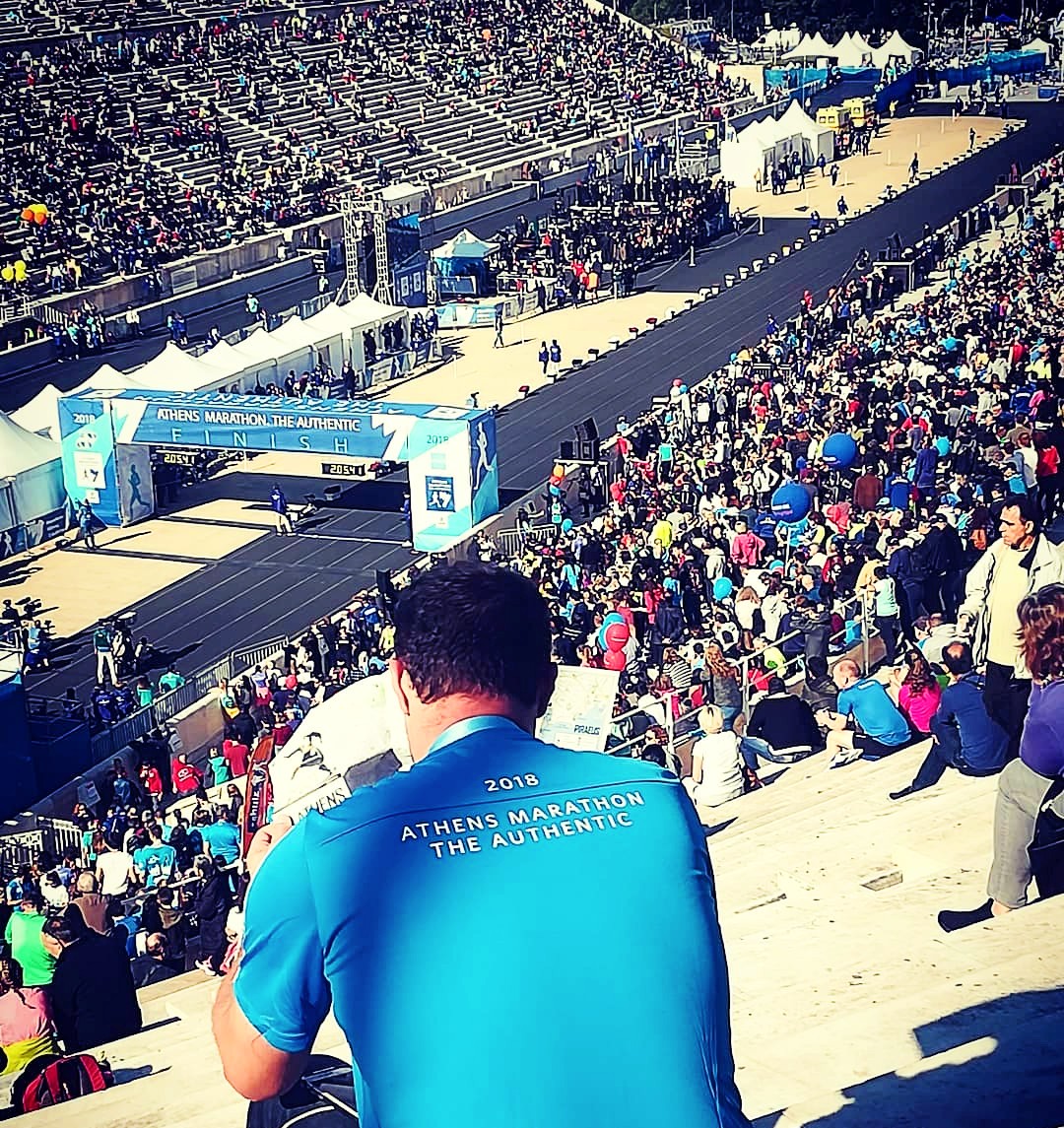 Regardless, the Greek forces managed to beat the invading army. According to Herodotus, the great historian, the Athenians only lost 192 men, while the casualties for Persians rose to 6,400.

As soon as the Greek states won the Marathon battle, a Greek messenger, Pheidippides, set off to carry the victorious news to the ancient city of Athens. According to legend, he exclaimed the historical phrase “We won” (nenikikamen) before passing. 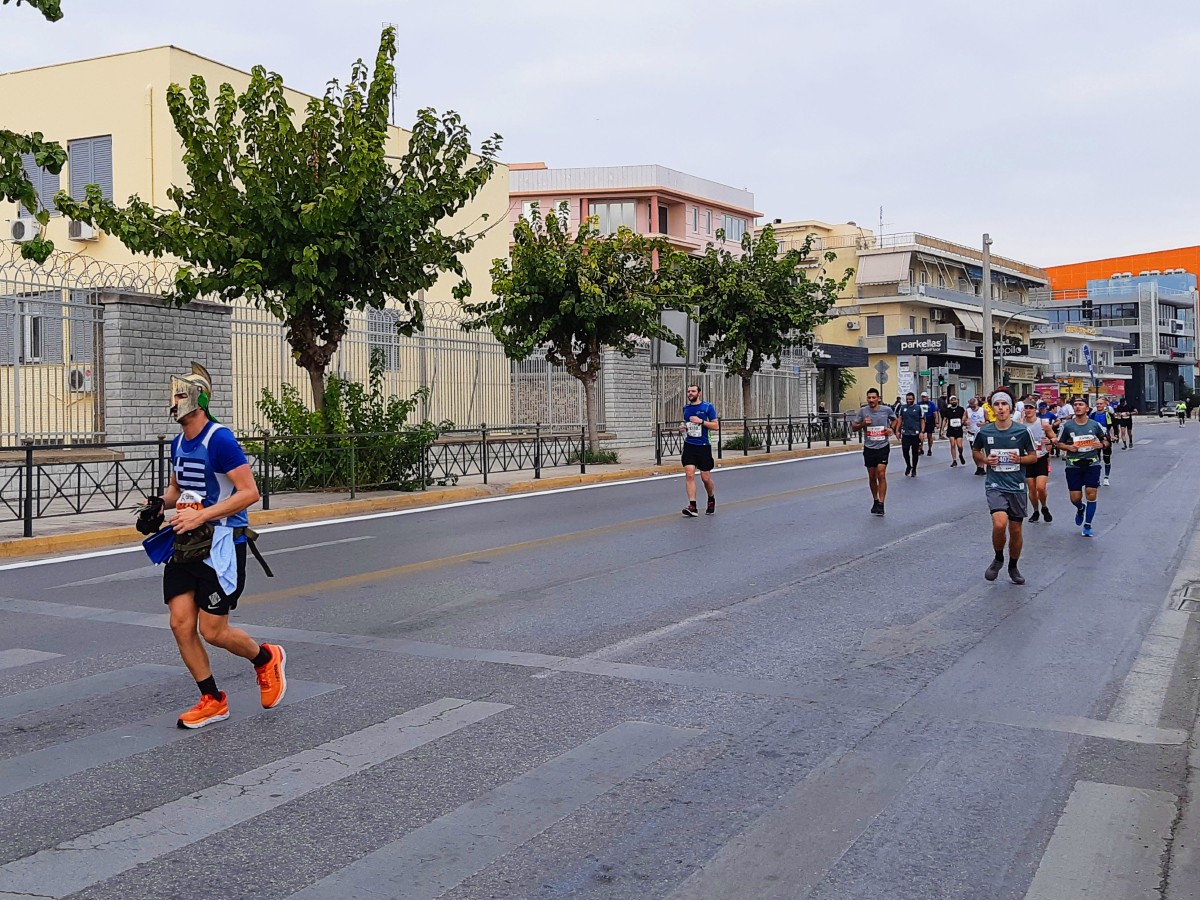 There are a few different stories about Pheidippides. In fact, Herodotus claims that Pheidippides had ran from Athens to Sparta. Allegedly, he covered 219 kilometres, in just one day, in an attempt to summon the Spartan army against the Persians.

According to the Greek writer Plutarch, the messenger who ran from Marathon to Athens was not Pheidippides, but a person by the name of either Thersippus or Eukles. A century later, writer Lucian mentioned a herald named Philippides.

It is unlikely that we will ever know exactly what happened 2,500 years ago. But what is certain is that, when running the Original Marathon Course, athletes follow the route of ancient heroes who helped shape the iconic Greek civilization.

Route of the Athens Classic Marathon

Here is an outline of the route of the Athens Authentic Marathon: 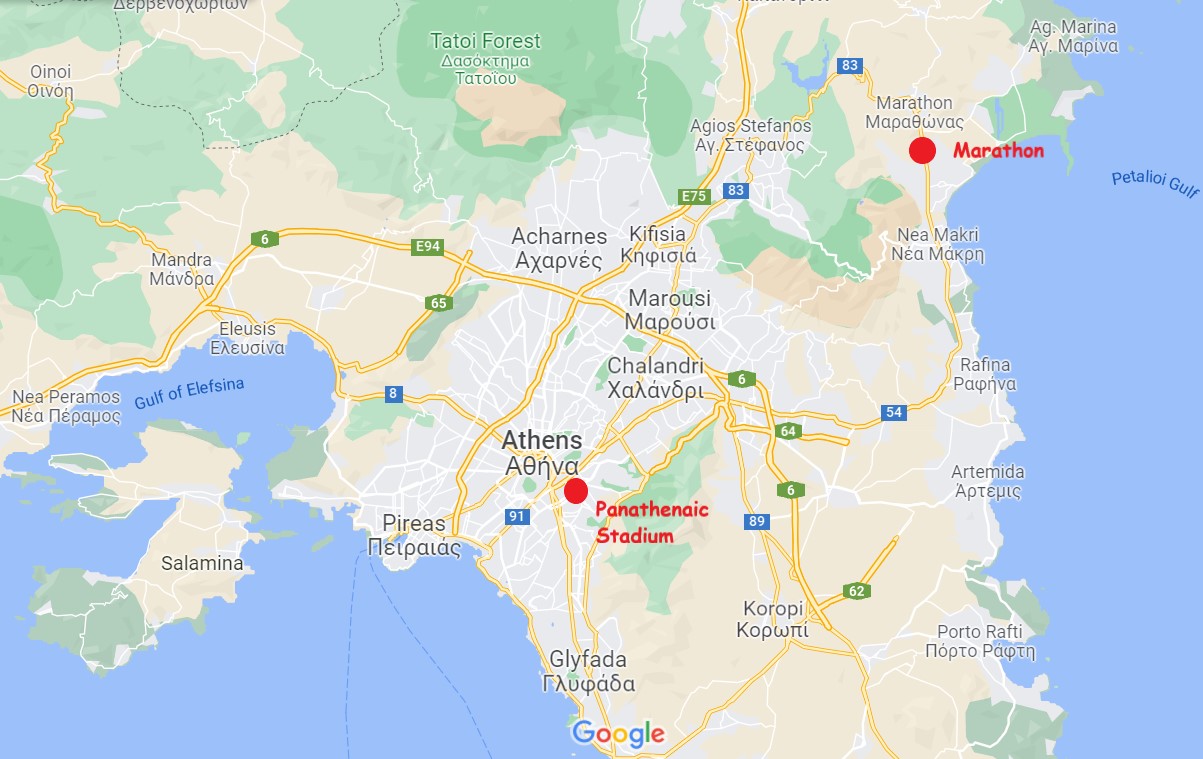 While these are all asphalt roads, the Athens Classic Marathon is considered to be a difficult major Marathon Race. At the beginning, there is a steep rise, and then the road goes lightly downhill.

Perhaps the toughest uphill climb is close to Katechaki metro station, not too far from the city center and the finish line.

This explains why the best time ever recorded during an official Marathon in Athens is considerably higher than the world record. More info, right below.

World records for the Marathon Race

The Athens Marathon began during the first modern Olympic Games, which were held in Athens in 1896.

According to the official race results, it took 2:58:50 for the Greek Marathon winner, Spyros Louis, to run from Marathon town to the Panathinaikon Stadium. People carried the Greek athlete on their hands, to celebrate his victory. 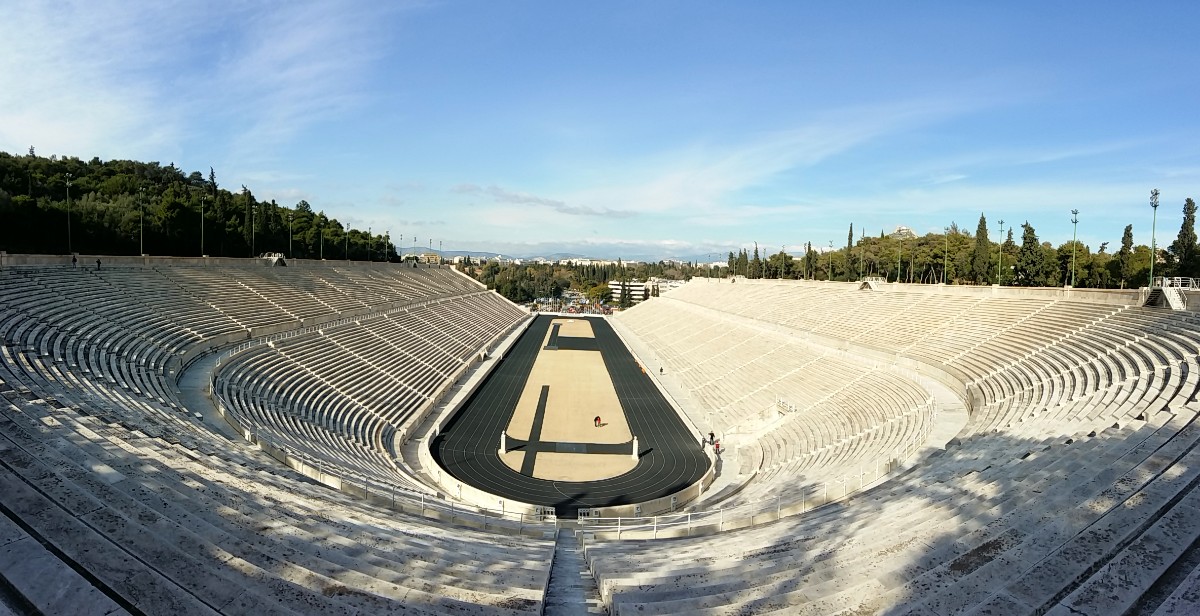 The Kenyan athlete who holds the world record, Eliud Kipchoge, has also ran the route in just under 2 hours, but that is not considered an official world record. You can read more about him here.

(I find it absolutely insane that someone can run an average of 20+ kilometres / hour and keep the pace up for a couple of hours!)

And since we are talking about records, the oldest Marathon runner who participated in the 2021 Athens Marathon is Mr Stelios Prassas, at age 90!!! You can watch a fantastic, inspirational interview in this short video, showing what human will can accomplish.

How can I participate in the Athens Marathon?

The Athens Marathon always takes place on the second weekend in November. Registrations generally close about three weeks before the Marathon weekend, but the races are often fully booked long before that. 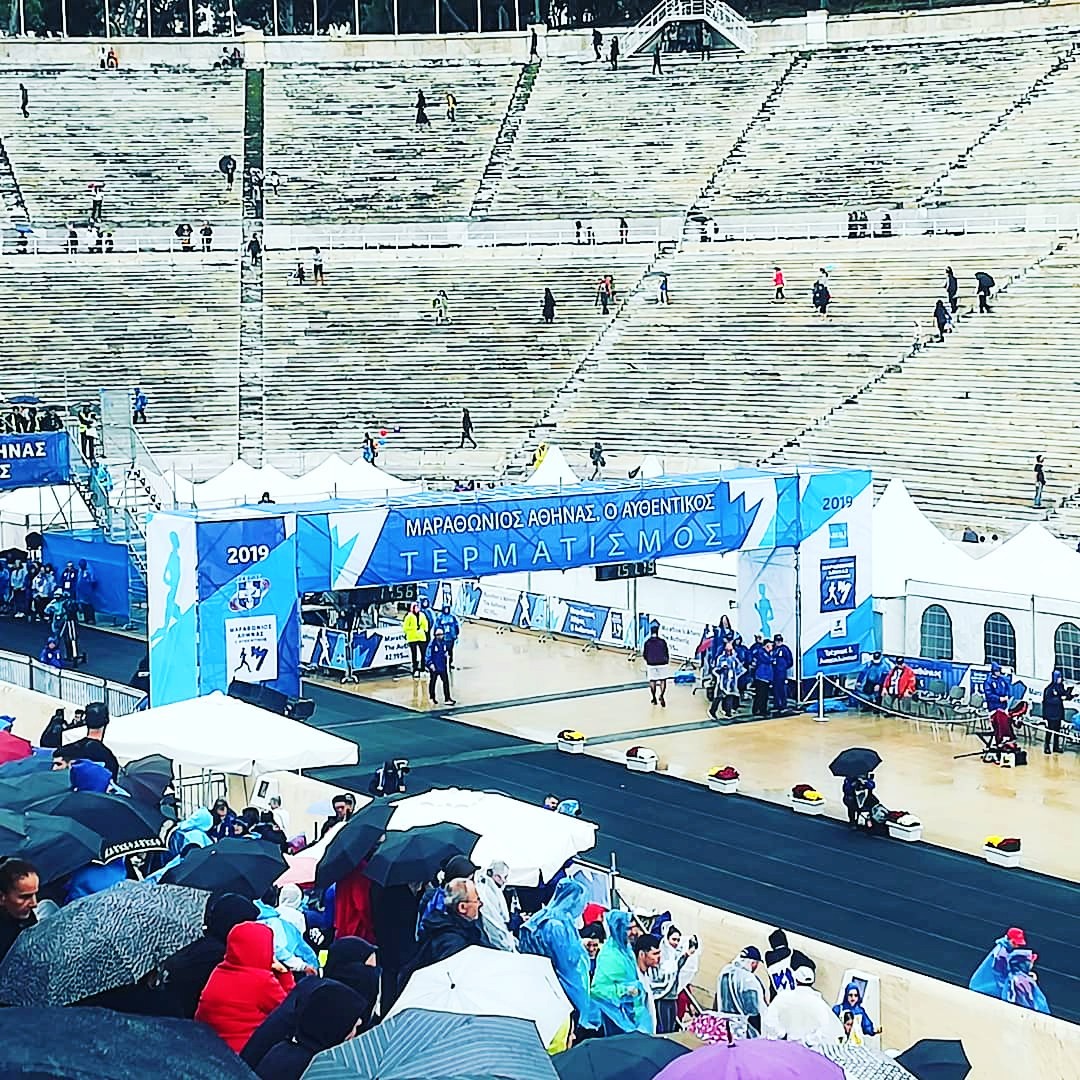 There are three races where you can participate: 5 kilometres, 10 kilometres and the full Marathon race at 42.195 kilometres. The Authentic Marathon course is also available as a Power Walking race.

In 2022, the 10 km race will take place on Saturday, 12 November. The 5 km race and the Classic Athens Marathon will happen on Sunday, 13 November.

These guys running the 2021 full Marathon chained to each other seemed to have lots of fun, even though Averel was missing. 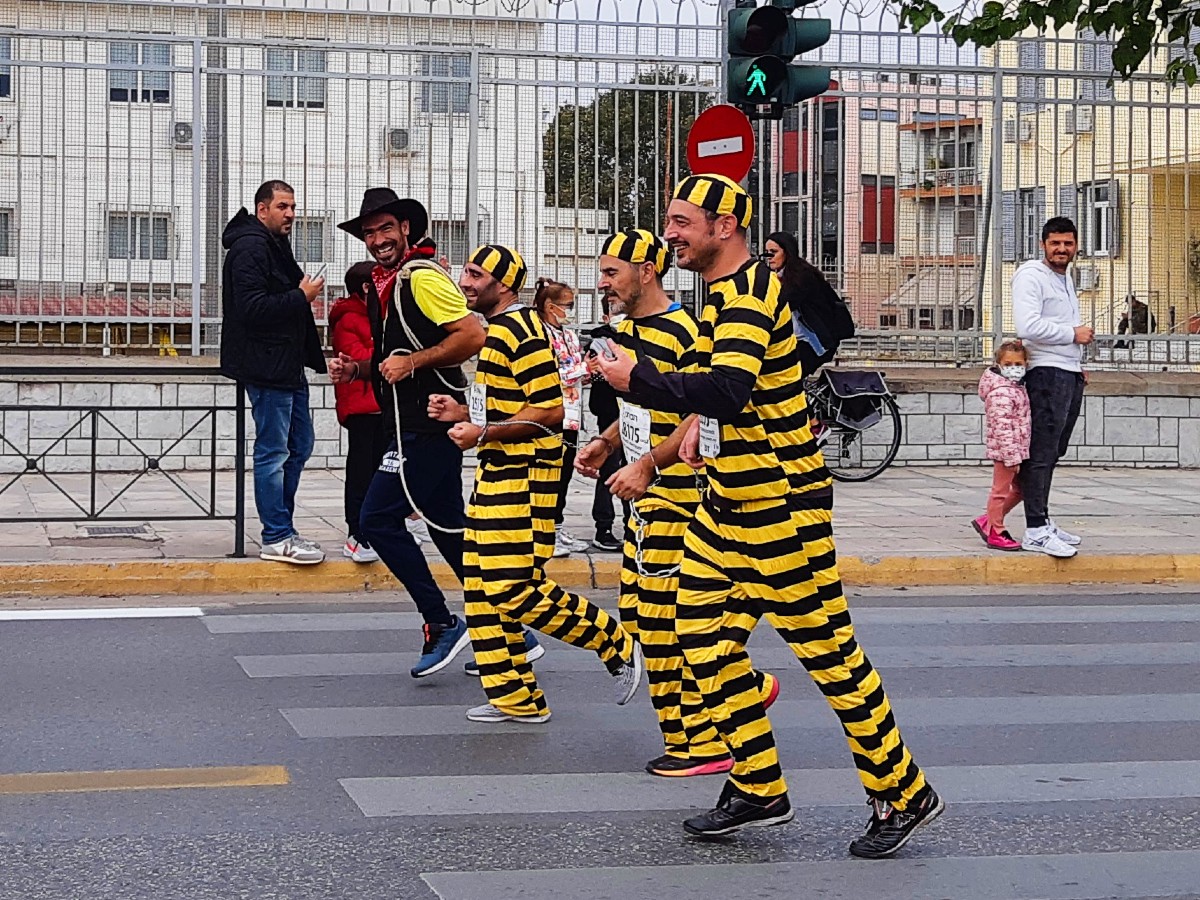 You can find all relevant information and register at the official Athens Marathon registration centre: Athens Authentic Marathon.

Anyone who wants to run a half Marathon race, can check out this other major race, which happens every year on the third Sunday of March.

There are two races. One of which is a half Marathon race (21,097.5 kms) and the other one is 5 km. The route goes around central Athens, and it’s not as a tough course as the Authentic Marathon.

Weather in Athens in November

The weather in Athens in early November can generally be sunny, pleasant, and ideal to run a Marathon. However, sometimes it might also be cool and rainy, like in 2019. So you won’t know until you are actually here. 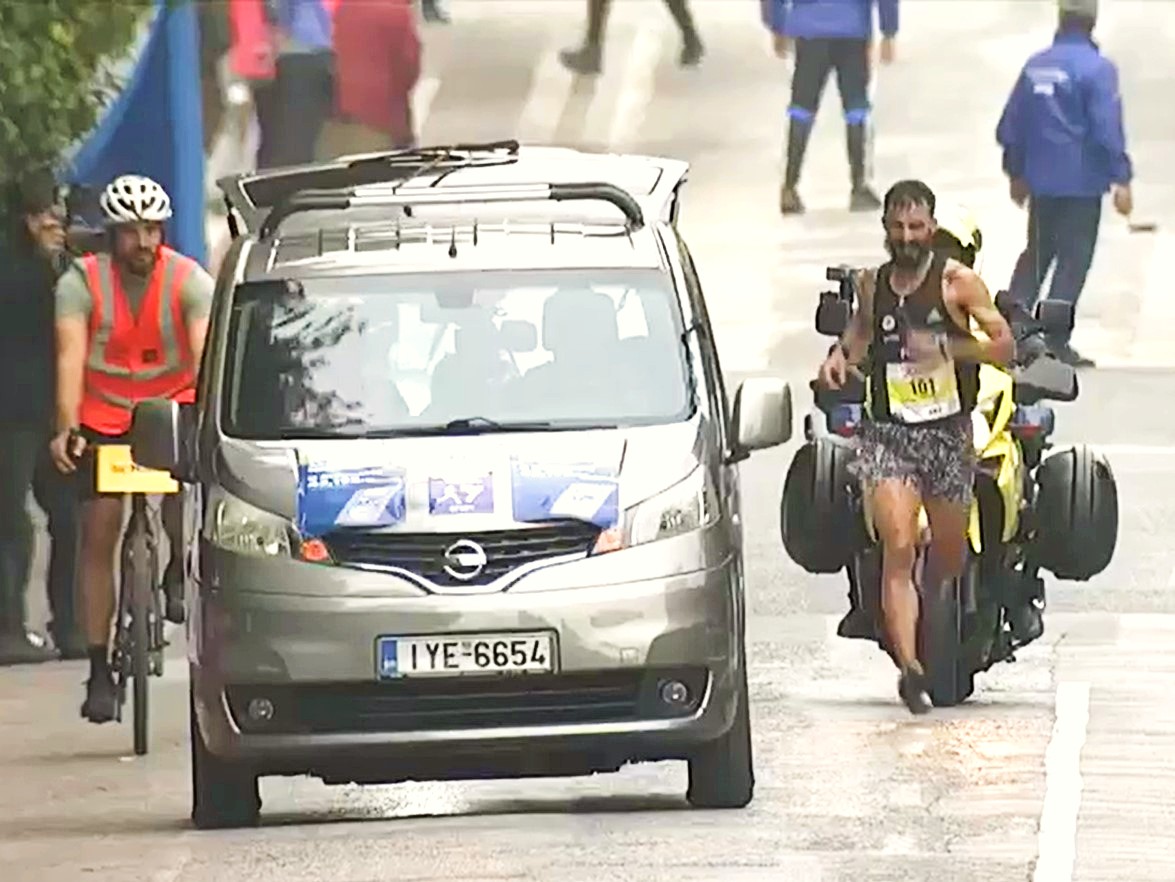 If you are travelling from abroad for the Marathon, keep your eye on the forecast, and keep you fingers crossed for no rain!

For more information on the weather, have a look at this article about Athens in November. Also, check out this guide which will help you decide what to pack for Greece.

If you are visiting Athens, or have recently moved here, you should be aware of the traffic restrictions on the race date.

If you stand anywhere along these main roads, you can watch the runners compete. It’s also a rare occasion to see those streets without any traffic. 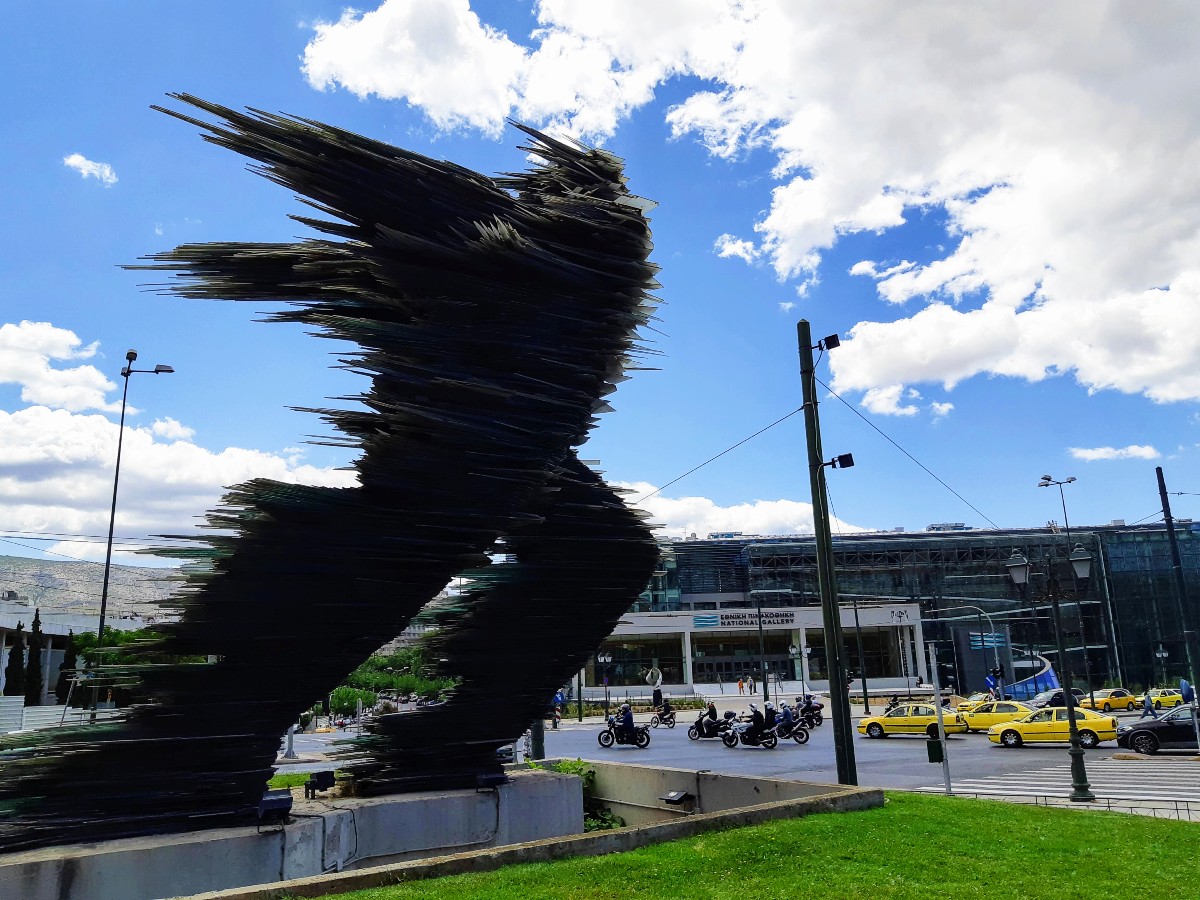 Athletes run past “the runner” statue, located just outside the National Gallery

The race begins at Marathon at 9 am. The first athlete usually reaches Ethiki Amyna metro station around 10.30 am, and gets to the finishing point a little after 11 am.

The Marathon is not just a sporting event – it’s a rare occasion to see our city car-free, and to watch runners of all ages participate in this major race. Why not go out there to support them, and enjoy the festive atmosphere! 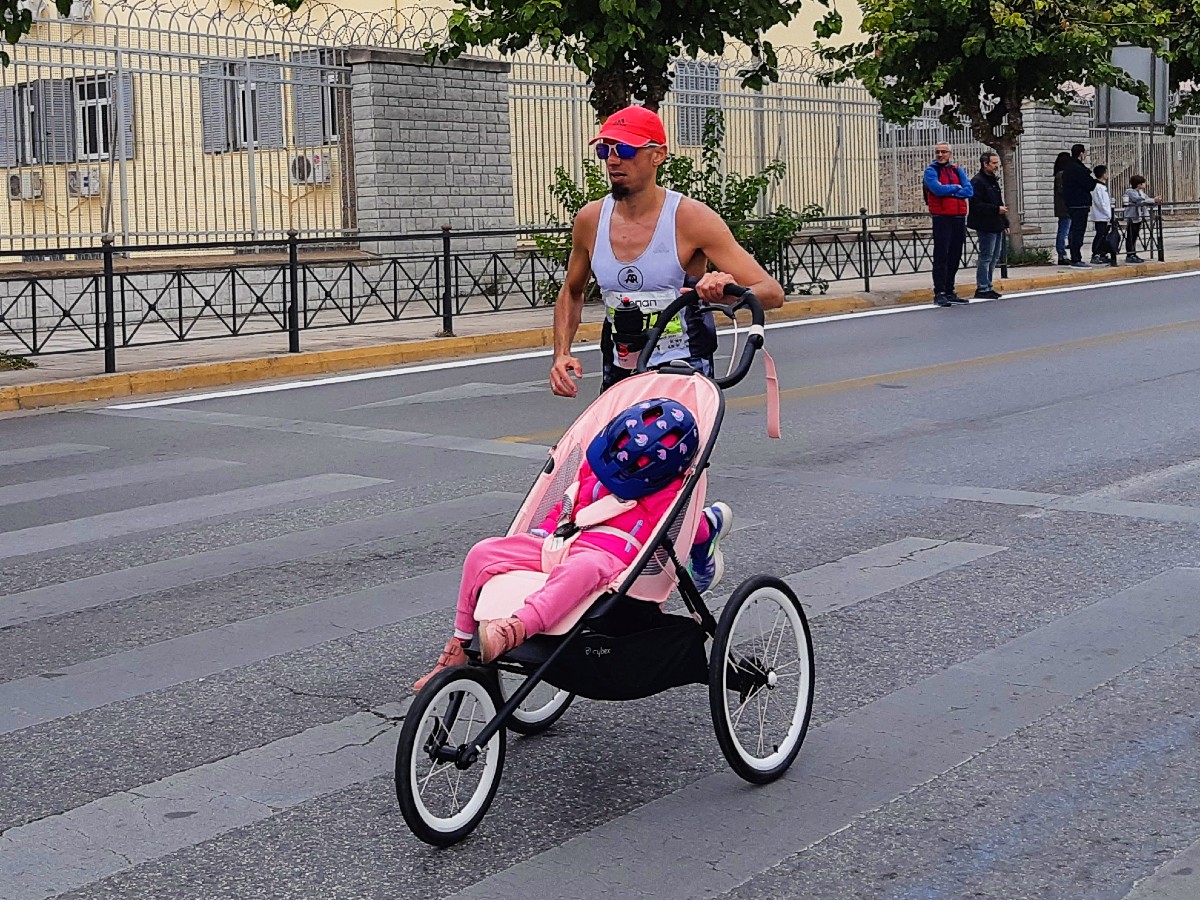 Here are the usual traffic restrictions (link in Greek). Note: If you happen to be travelling to / from the airport on that day, it’s best to use the Athens airport metro.

Now, for anyone who wants to run the Authentic Route on any other day, I don’t think I have great news – the road is generally quite busy with traffic.

If you really want to do it, it’s best to do it very early on a Sunday morning. Even so, it can be a challenge, as you won’t find pavements everywhere. The bottomline? Run at your own risk!

Can anyone run the Athens Marathon?

The Athens Marathon is open to everyone, as long as they are over 18 years of age. No qualification is needed in order to participate.

Does the Athens Marathon sell out?

Yes, it’s possible that all races in the Athens Authentic Marathon sell out. If you want to participate, it’s best to register early, to avoid disappointment!

Where does the Athens Classic Marathon start and finish?

The Athens Classic Marathon begins in Marathon town, at a distance of 42.195 km from central Athens, and ends at the Panathenaic Stadium.

What is the average Marathon time?

Based on previous races, the average Marathon time is around 4.5 hours for men, and 5 hours for women.

What is the world record for the Marathon race?

The world record for the Marathon race is held by the Kenyan runner Eliud Kipchoge, and is 2:01:09.

I hope you have enjoyed this article on the Athens Authentic Marathon! Here are a few more guides you will like if you are in Athens:

Hi! I’m Vanessa from Athens, and I love providing information about my city. I’ve always admired Marathon runners, and their extreme willpower. If you have ever ran a Marathon, whether in Athens or elsewhere, I’d love to hear from you! Feel free to leave a comment right below.