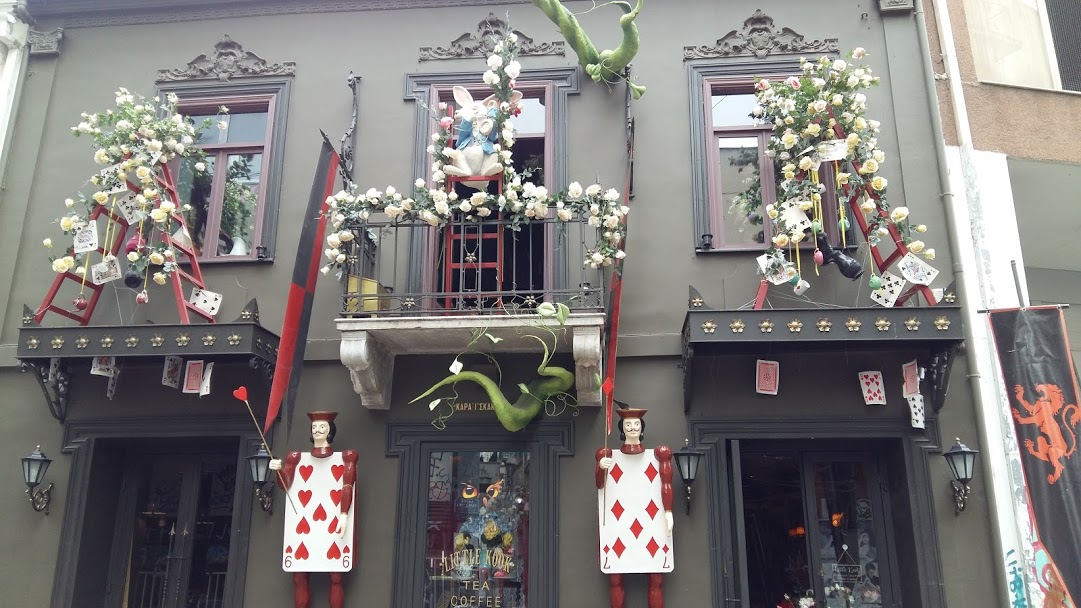 Are you travelling to Athens with children, or looking for a unique place to have a coffee and a cake? Little Kook Athens is a place that will bring back childhood memories and transfer you to dreamland.

Tucked away in one of the tiny streets in Psyrri area, you will find Little Kook café. It only opened a few years ago, in 2015, and it is one of the most photographed coffee places in Athens.

With often changing themes, according to the season such as Christmas and Halloween, it has become one of the more modern attractions in Athens. 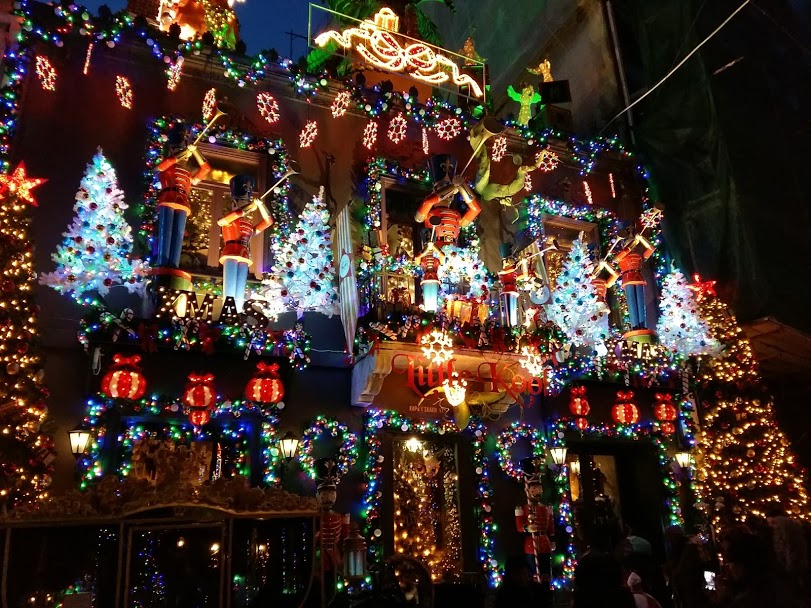 The decoration has drawn inspiration from the stories Alice in Wonderland, Mary Poppins, Cinderella, Halloween creatures, and several other fictional (?) characters. 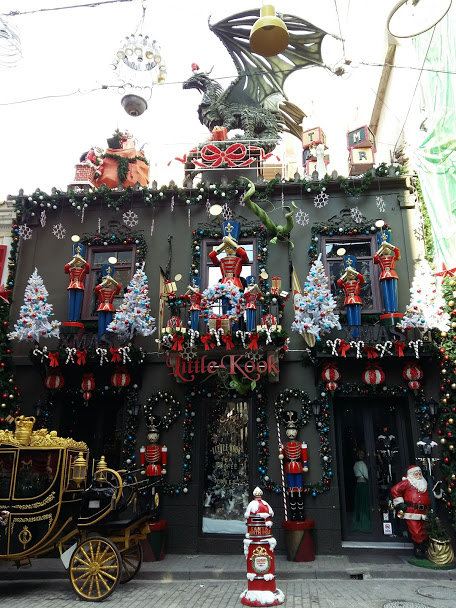 There are also seasonal Valentine’s and Christmas trinkets.

No matter what the season, the large dark dragon on the roof of Little Kook has always been there. While it’s more relevant during Halloween, it has somehow been combined with creatures from the fairy world, like Cinderella and Alice. 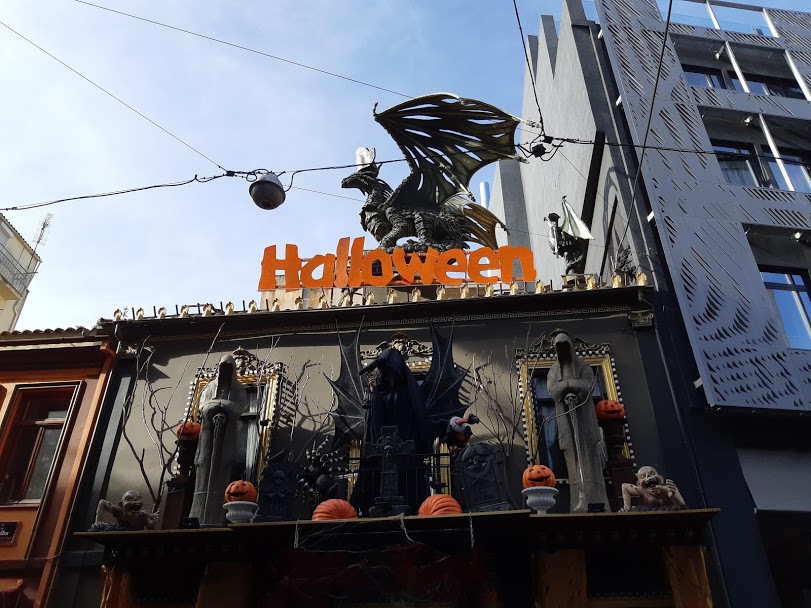 The waiting staff of the Little Kook in Athens also dress accordingly, with colourful themed outfits. They look like they’ve jumped out of a fairytale book – perhaps they have!

Even if you don’t want to sit for a coffee at Little Kook Athens, it’s worth passing by to check the decoration on Karaiskaki and Pittaki streets. There is always something different going on, normally involving umbrella or light installations. 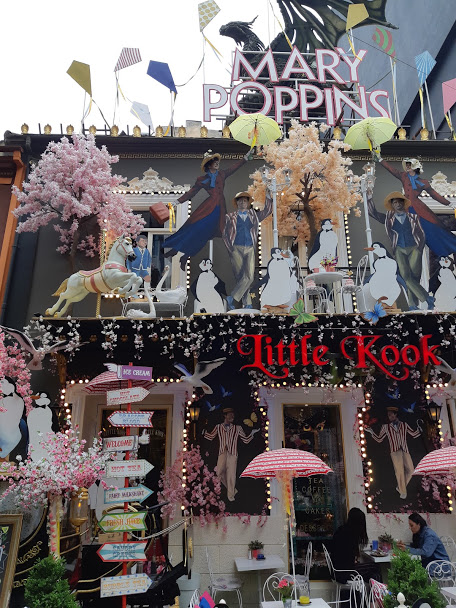 In fact, Pittaki street was already quite colourful before the Little Kook opened, due to a local initiative supported by the Municipality of Athens.

A group of lights, offered by local shops and residents, had been installed in November 2012 with the aid of private funding.

Pittaki was unofficially renamed “the street of lights”, as it was a brightly lit alleyway in the middle of an otherwise dark area.

The lights were turned on every evening, and the street became famous among Athenians, not least because it symbolized a light during the dark times of the Greek crisis.

This video shows part of the process, and what the street used to look like long before Little Kook Athens opened.

Unfortunately, the lights were uninstalled in 2018 for safety reasons, due to lack of further funding. The Little Kook took over with umbrellas and other decorations, and the street is still bright and colourful.

The Little Kook has a quite long menu. They serve coffee, several types of tea, warm chocolate, refreshments, wine, beers and other drinks.

However, the highlights are the enormous cakes, cupcakes, crepes and other desserts. Expect names like “Dragon’s breath” or similar.

Well, we may have just made that up, as who would like to have a taste of Dragon’s breath? 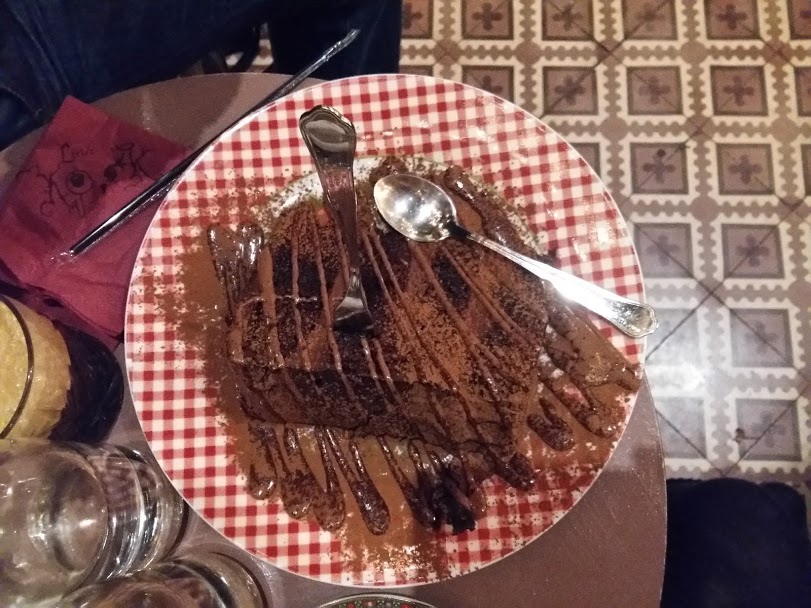 If you have children, you have a great excuse to sit here and enjoy a glass of wine or slice of cake. If you don’t have children, you can always make up an excuse. You are doing research for your friends who have kids, and they are travelling to Greece soon. These “friends” can be imaginary though!

At the same time, here’s our honest opinion in terms of the actual desserts. We weren’t too impressed when we visited.

We found the desserts too sugary for our taste – yes, there is such a thing as too sugary desserts!  It wouldn’t be a place that we’d go often. That said, we would go back at some point to see the ever-changing décor. 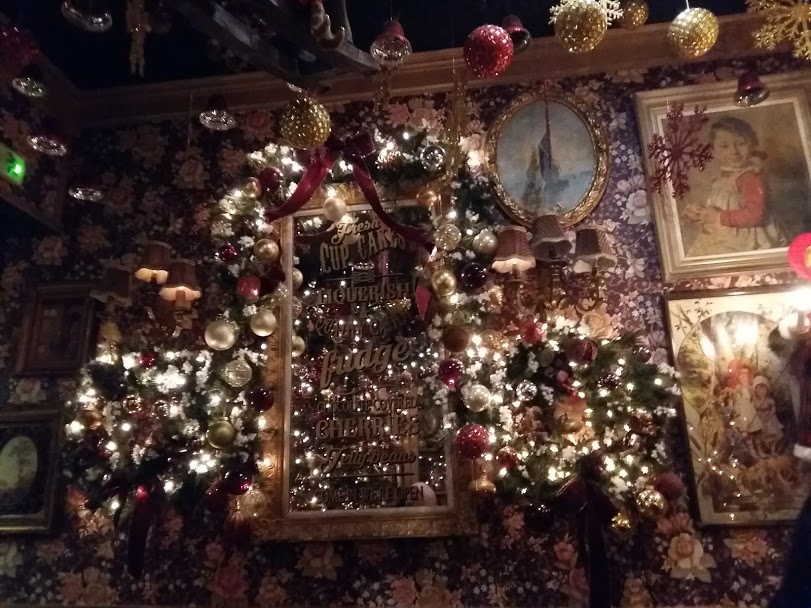 In fact, if we were looking for great desserts in Psyrri area but no fancy decoration, we would choose Serbetospito tis Nancys nearby.

If you go, ask to meet Nancy, who’s been in the dessert-making business forever, and is as passionate as it gets!

Where is Little Kook in Athens?

You can find Little Kook café on Karaiskaki 17 in Psyrri area, very close to Monastiraki metro. Follow their Facebook page for any updates. 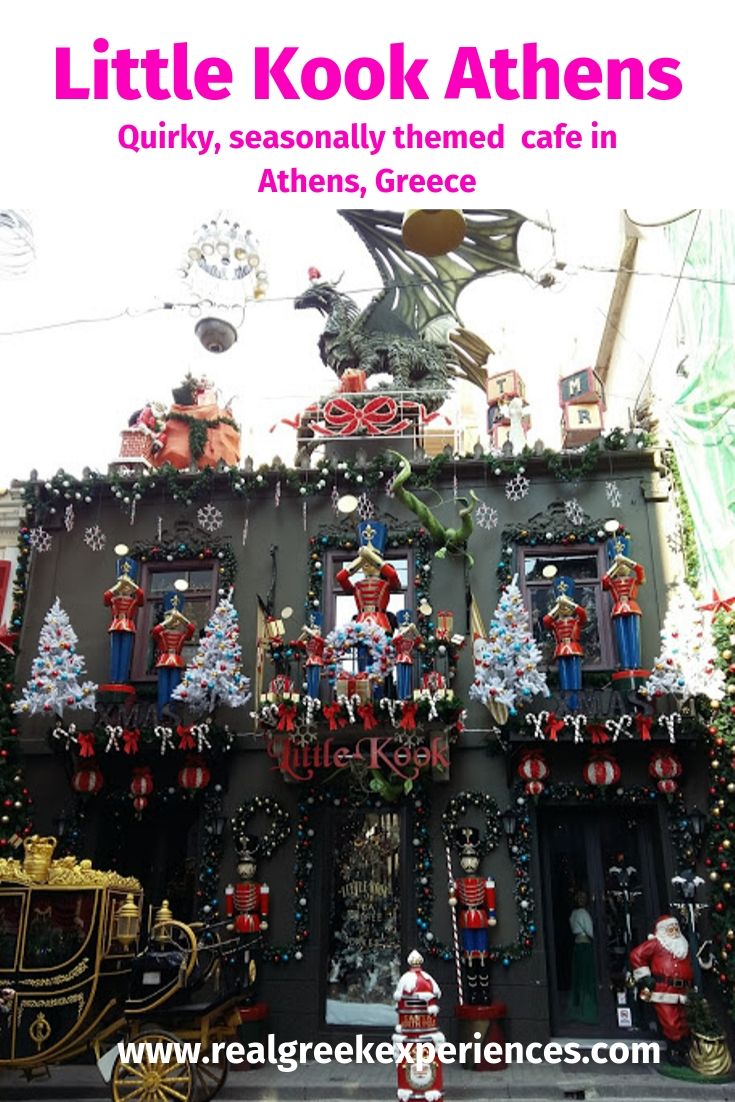