Discover why Milos is becoming a must-visit destination in the Cyclades as we share our top reasons to visit Milos island in Greece.

The Greek island of Milos is one of the Cyclades chain of islands. Connected to Athens by both ferry and air, it’s easy to get to Milos as an international traveler.

Whilst it may be most well-known as the island where the Venus de Milo was discovered, it’s gaining recognition for its fantastic landscapes and beaches.

Milos is a rising star when it comes to island destinations in Greece, and we’ve taken a holiday in Milos a couple of times in the last few years. Based on our experiences, here are some top reasons to visit Milos island in Greece.

Why Visit Milos Island in Greece?

Greece has over 200 inhabited islands. Some of them, like Santorini, Mykonos, Rhodes and Crete, have been famous for several decades. Others have been under the radar until fairly recently. 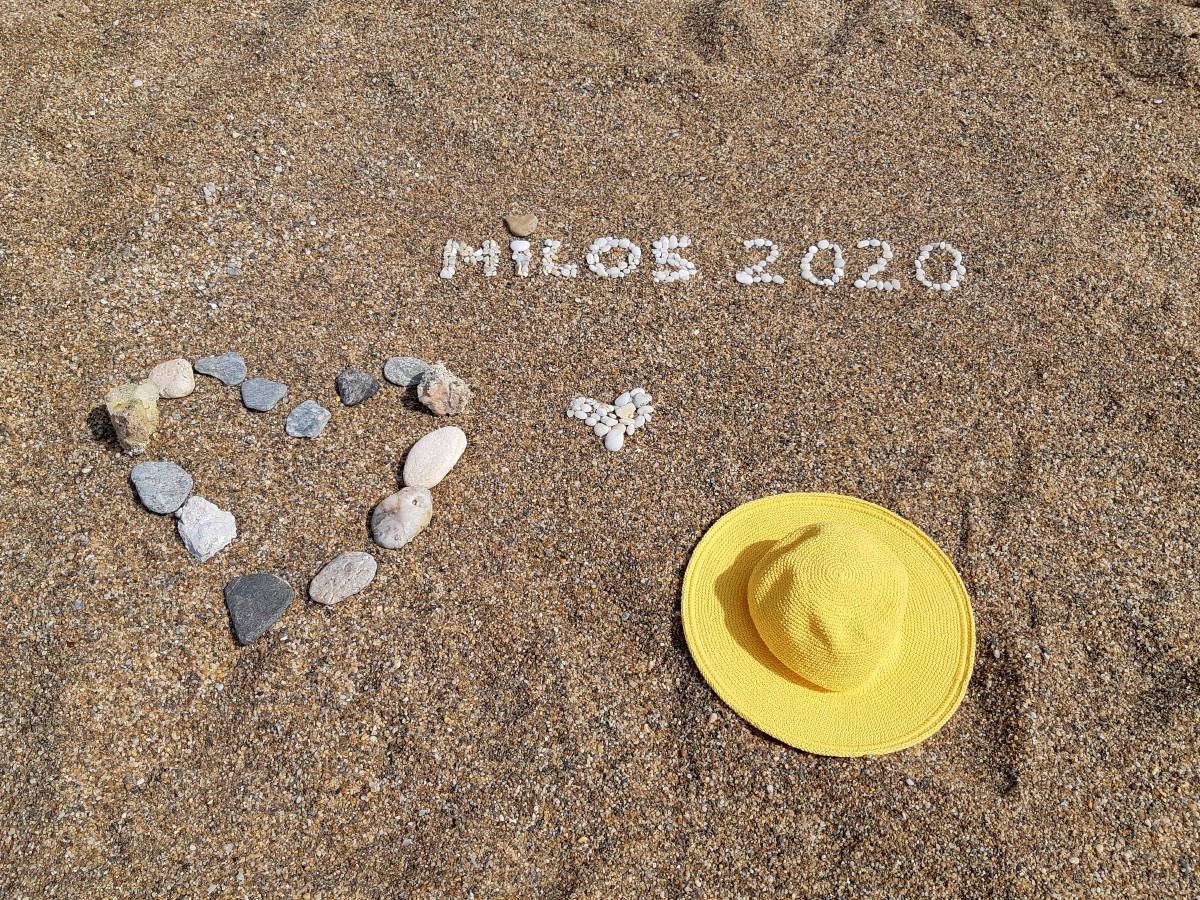 Milos falls in the second category. With tourism steadily rising over the last decade, it’s one of the relatively popular Greek islands to visit these days. However, it has still kept a wild, authentic side, that is more difficult to find in some other Greek destinations.

Here’s some of the top Milos attractions and highlights waiting to be experienced.

Τhe unique beaches in Milos, like Sarakiniko and Kleftiko

Milos is a volcanic island, and the local minerals and rocks come in all different colours. As a result, the beaches in Milos are very diverse and overall stunning. 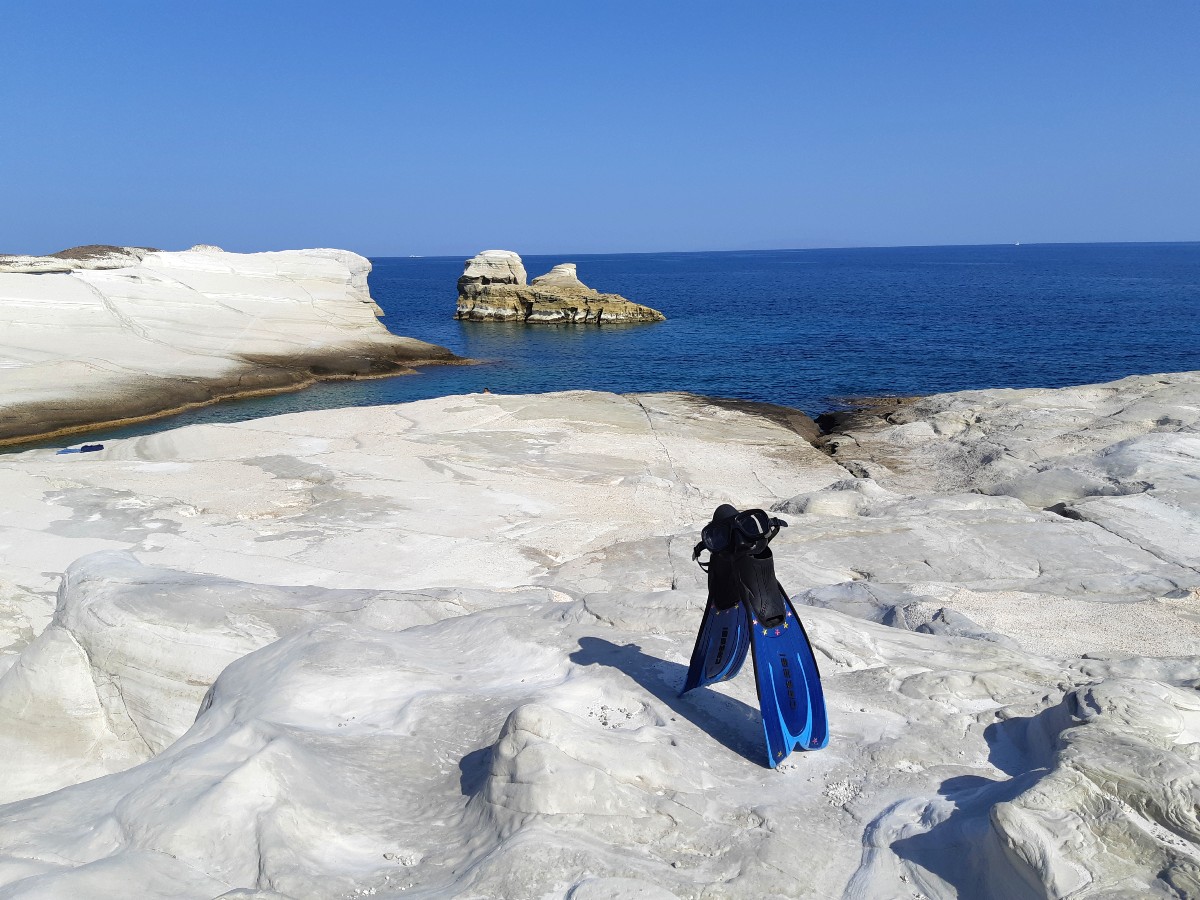 The white lunar landscape that you will have probably seen in photos is the popular Sarakiniko beach. Walk on the spectacular rock formations and go for a swim in the deep blue sea!

Also, check out Mandrakia, which looks similar but is not too popular yet. 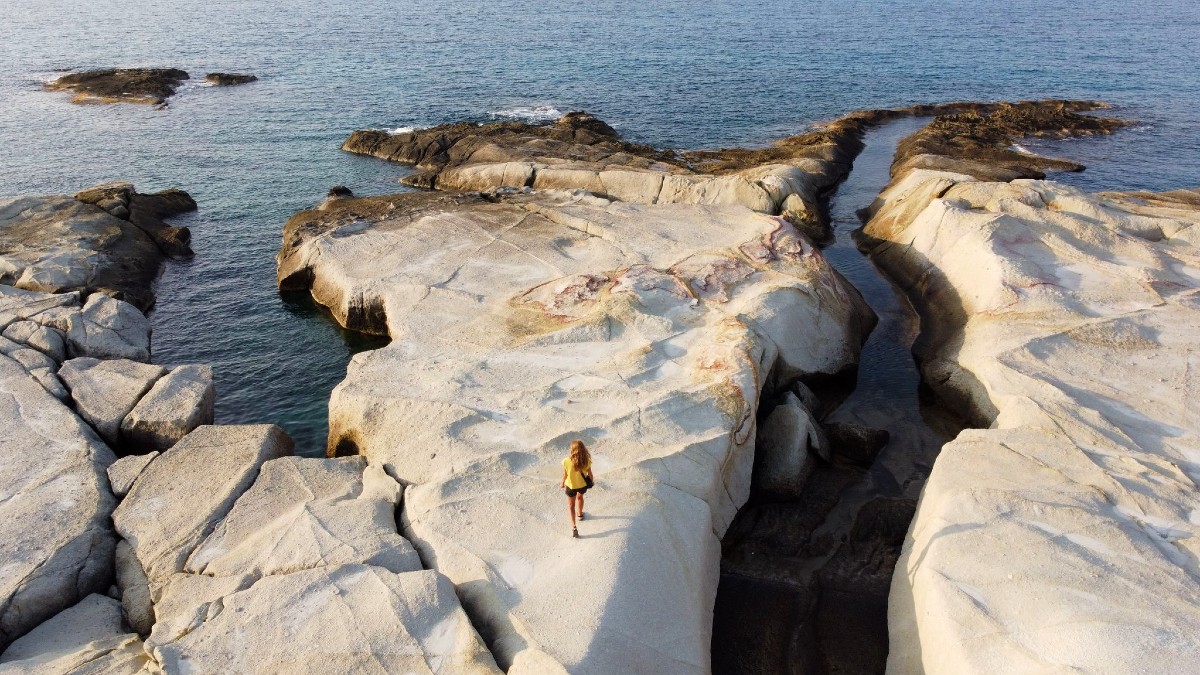 One of the most popular activities in Milos is a boat trip to the famous Kleftiko beach, with the tall, rugged rocks coming out of the sea. The boat will take you through and under the rocks, and you can snorkel in the sea caves! We loved the tour with Chrysovalandou boat.

Alternatively, it is also possible to hike to Kleftiko beach. Just bring your hiking shoes. 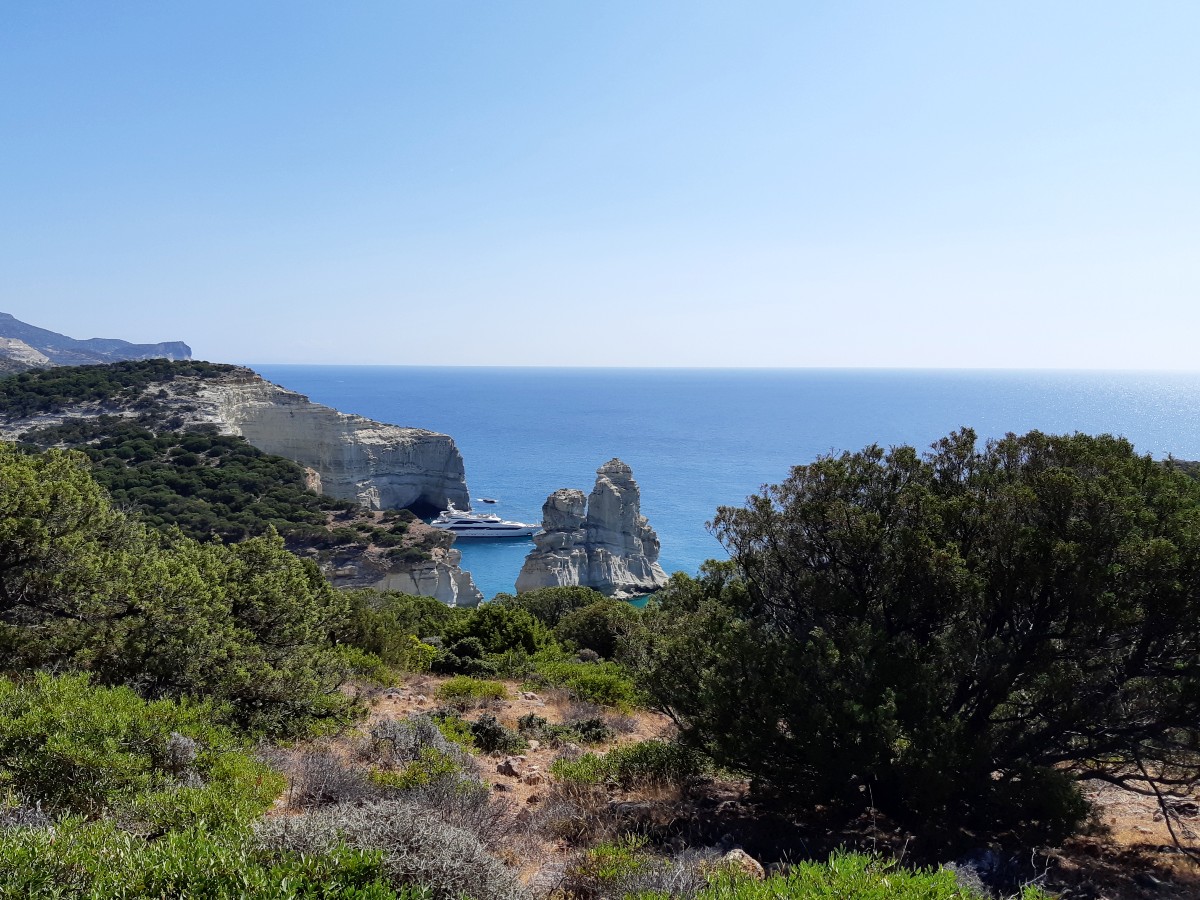 Milos also has you covered in terms of relaxing, sandy beaches. Head to Achivadolimni, Agia Kyriaki, Paliochori or Provatas, and enjoy the calm, shallow waters.

Finally, there are plenty of beaches in Milos where you can have more privacy. For example, follow the dirt roads to Kastanas, Triades or Ammoudaraki. You may even end up being on your own! 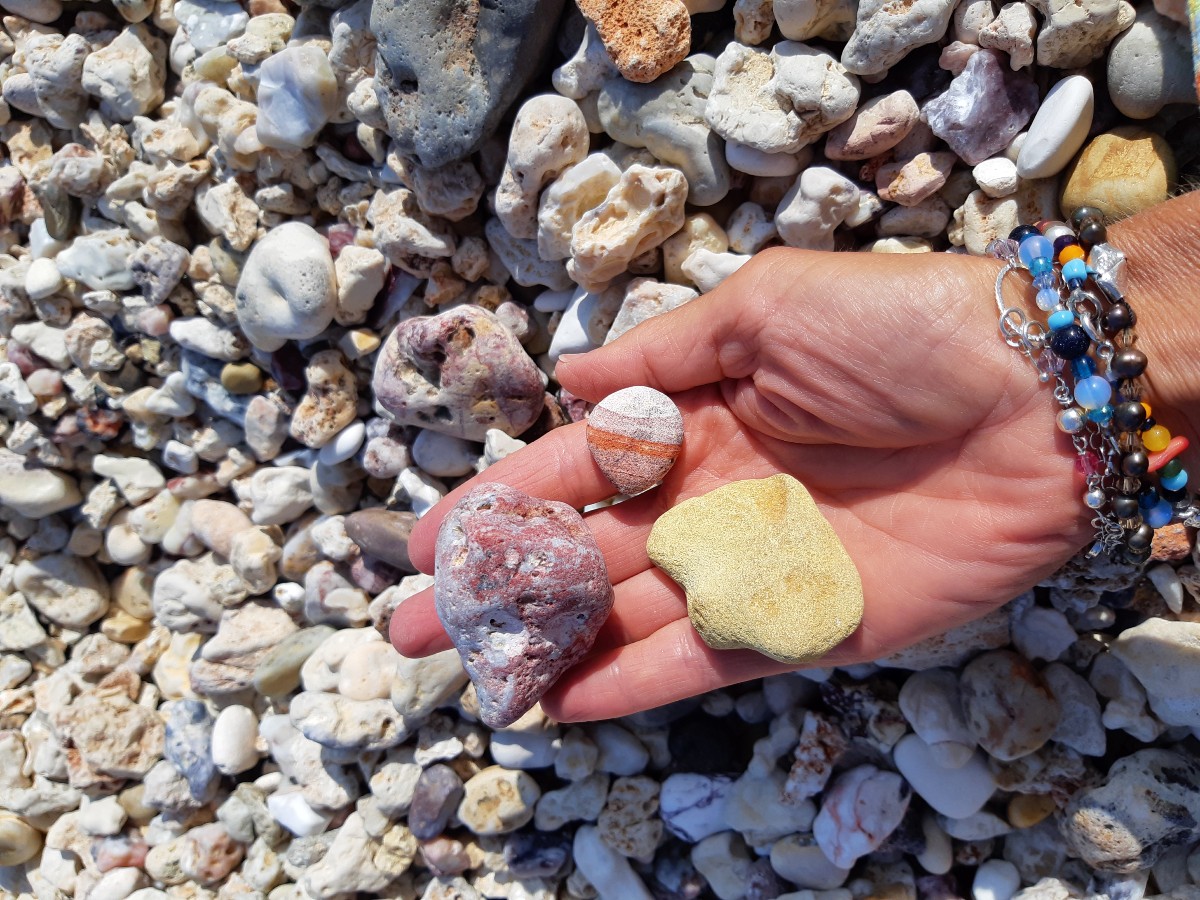 Overall, the beaches in Milos are quite diverse, and it’s hard to pick one over another. You can easily spend a week there and never see them all! Here is our full guide of beaches in Milos.

Just a note – like most of the Cyclades, Milos can be affected by the winds, especially during the meltemi season. Before you set off to a beach, check the weather prediction, or even better ask a local. The best beach in Milos is the one with the least wind on the day – trust me on that!

The landscapes and geology of Milos

Milos was created due to volcanic activity. There are two volcanos on the island, and the last eruption was around 90,000 years ago. 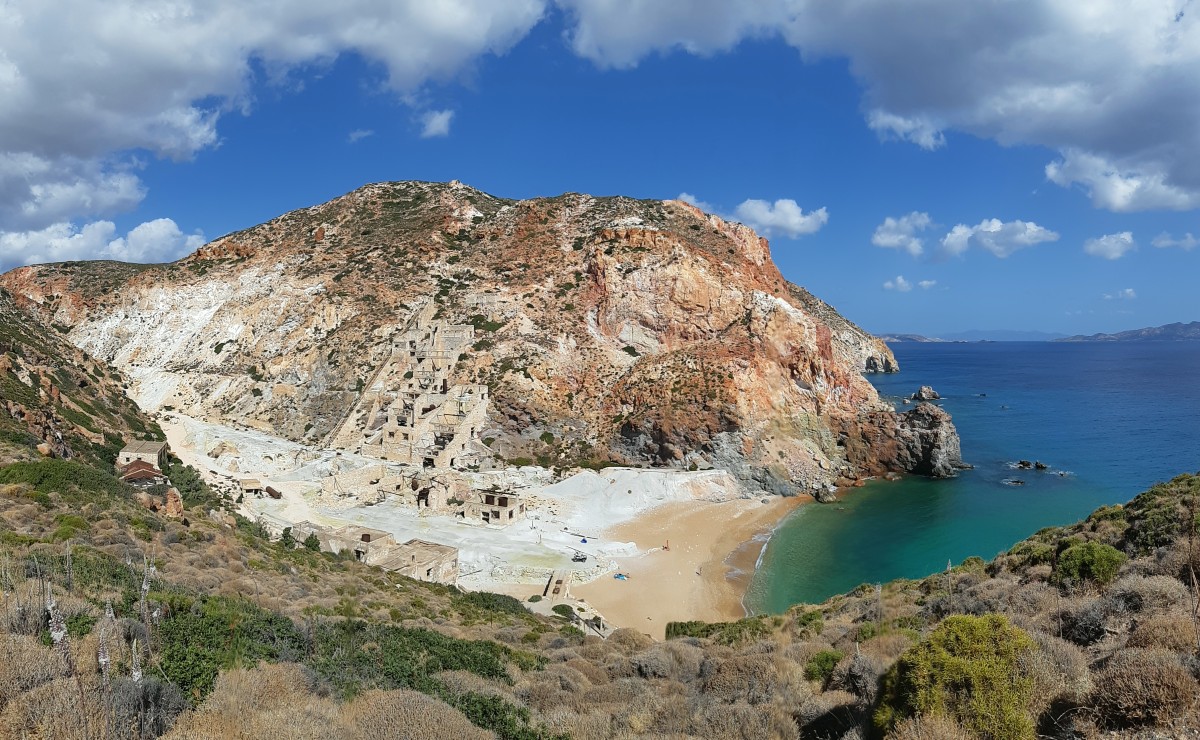 The volcanic rocks cover the largest area of Milos. In fact, wherever you look, you will see multi-coloured rocks! Materials like bentonite, perlite, pozzolana, sulphur and kaolin all exist on the island.

Even if you aren’t an expert in geology, you will definitely be fascinated by the colours. Some of the beaches in Milos, like Sarakiniko and Mandrakia, are surrounded by white rocks. 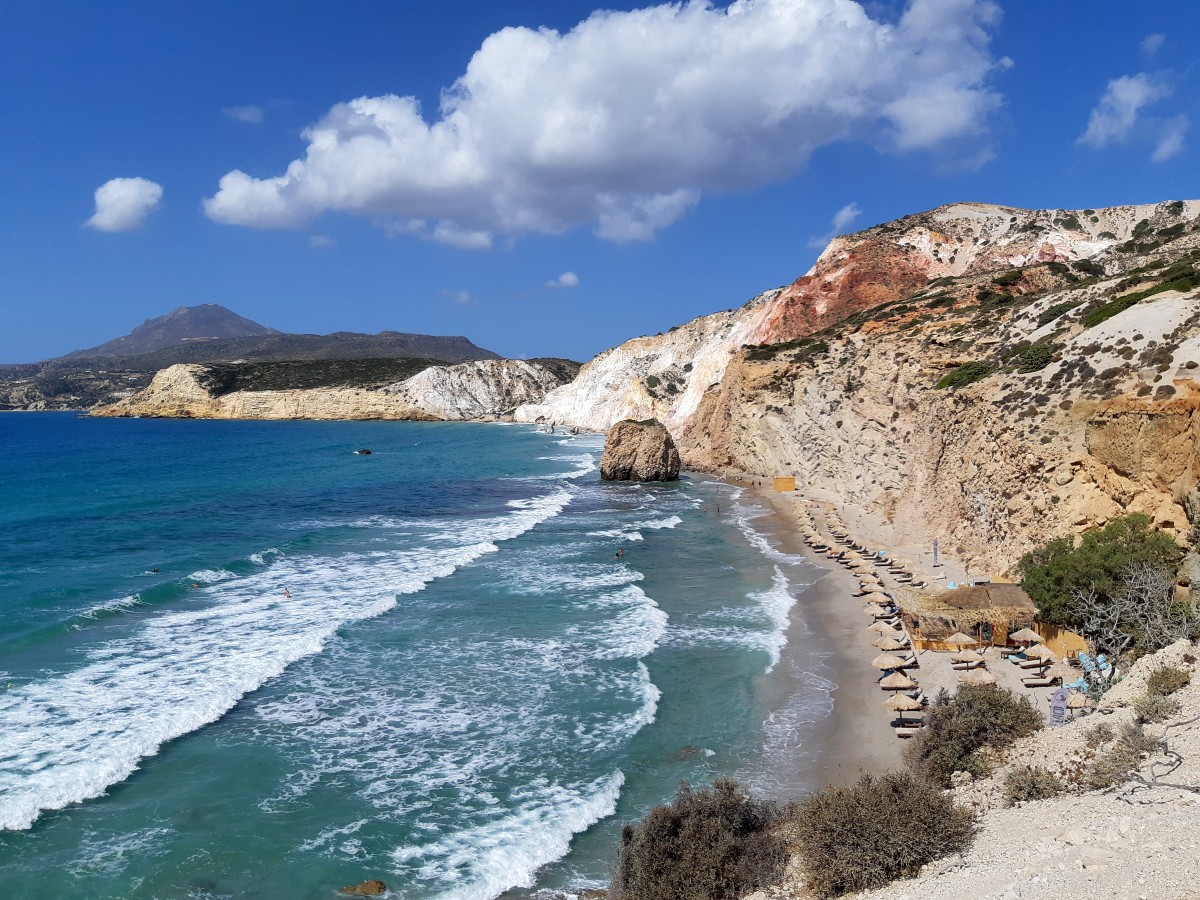 And there is also the famous Thiorichia beach, which was home to sulphur mines, and can best be described as yellow.

If you drive around Milos, you will immediately notice the mining areas all around the island, where access is not allowed. Many of these materials are still being extracted, and you are bound to meet the large mining trucks during your trip.

In addition to exploring Milos, I totally recommend visiting the Milos Mining museum in Adamas. It will help you identify all those colourful minerals, while offering an insight to life in Milos over the centuries.

You can also get in touch with Miloterranean, who offer their unique perspective on the island. 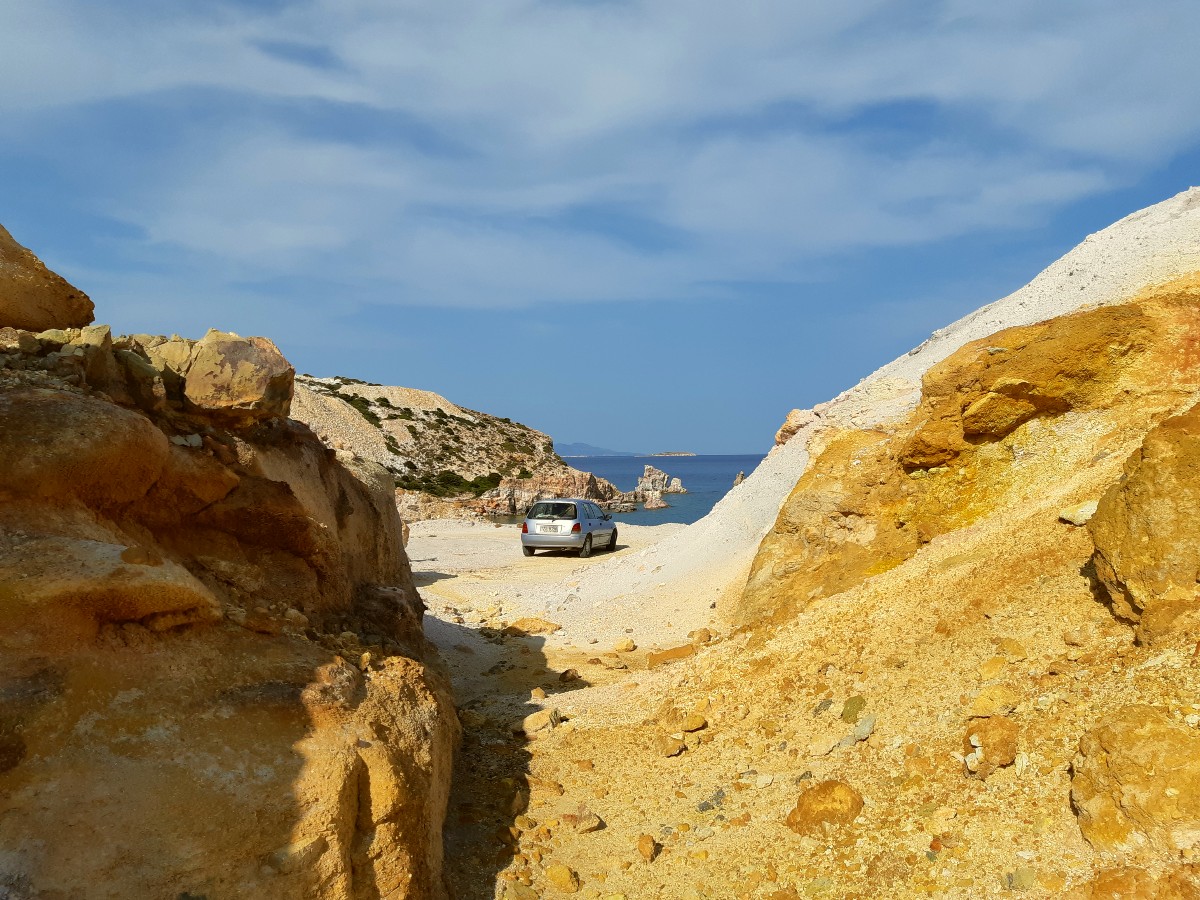 In order to explore Milos, make sure you rent an appropriate vehicle. Milos has a very extensive dirt road network, and a normal car isn’t suitable for most of them. Our car was slightly damaged on one particularly tricky dirt road – thankfully nothing that couldn’t be repaired!

The fishing villages and syrmata houses in Milos

Apart from the otherworldly landscapes, some of the most photographed locations in Milos are its fishing villages all along the coast. You will immediately notice the fishermen’s houses with their colourful doors. 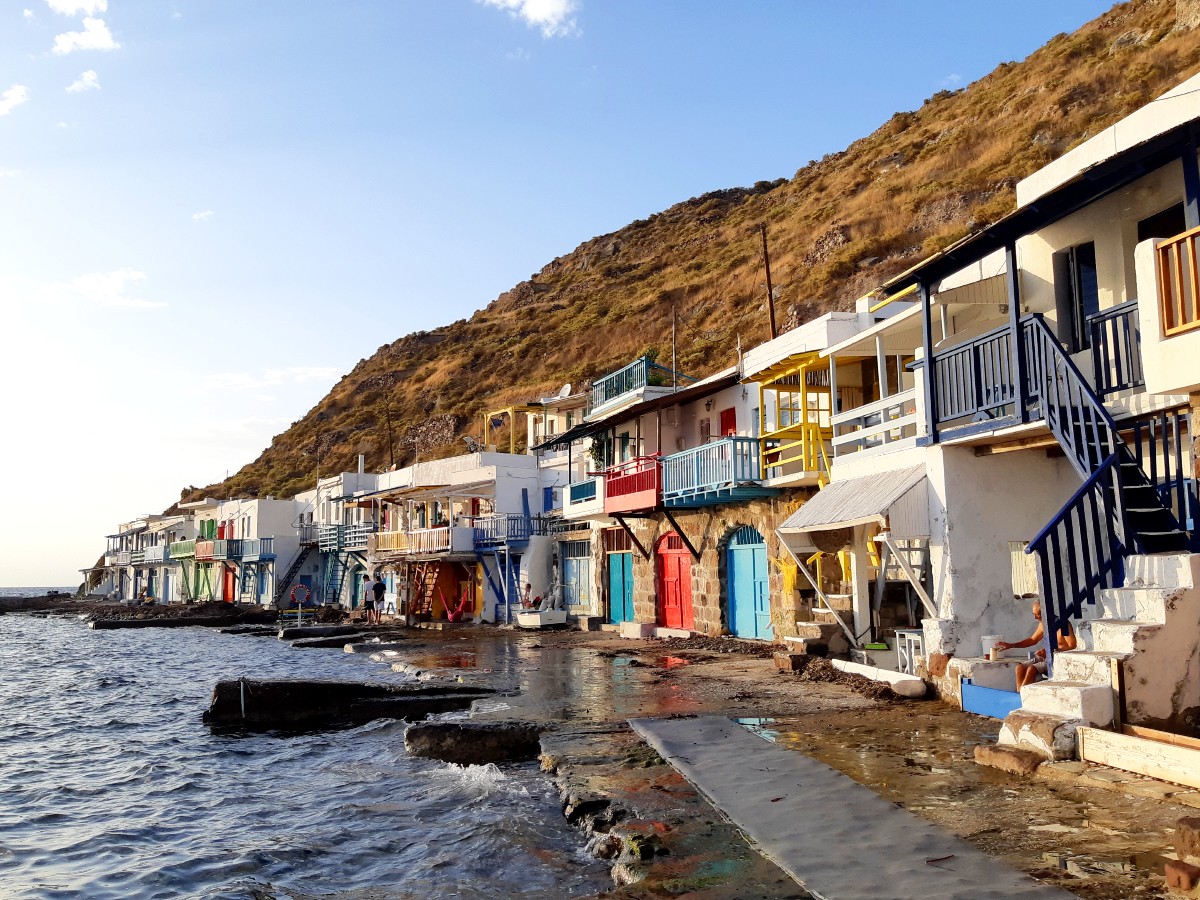 These houses, called syrmata, originally consisted of two floors. The family lived on the upper floor, and the boats were stored down below, at sea level.

These days, some of the syrmata have been transformed into rooms to let, but locals still live in others.
The most popular fishing village in Milos, especially during sunset, is Klima. I also liked the small settlements of Firopotamos and Agios Konstantinos, on the north coast. 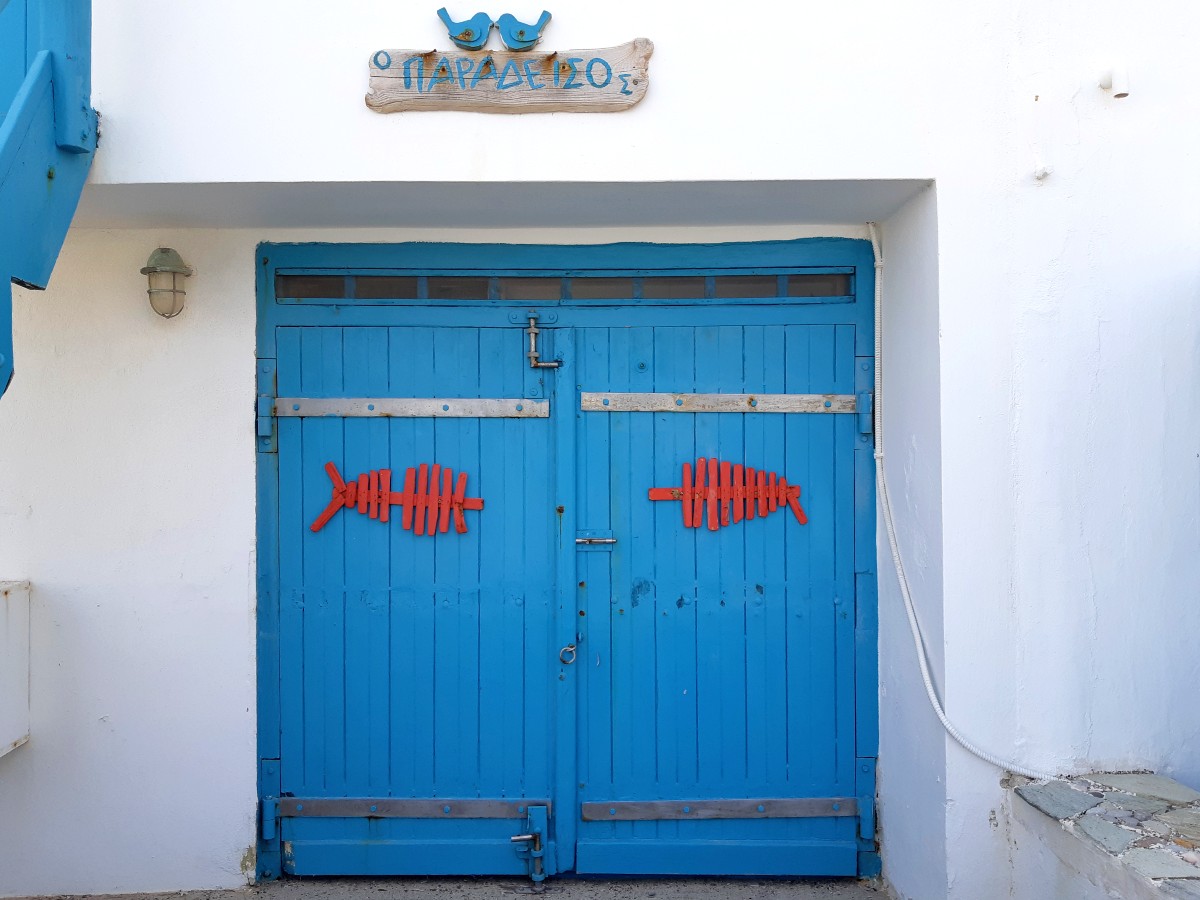 Tip – if you decide to stay in one of the sirmata, bring shoes that you don’t mind getting wet, as your doorstep will literally be in the sea!

If you are also going to the nearby island of Kimolos, you will see more of the quaint houses!

Enjoy the sunsets in Milos

Think “sunset in Greece” and you will most likely think of Santorini. In my personal opinion, Milos ranks very highly as a sunset island!

One of my favourite places to watch the sunset from was the top of the hill in Plaka, the main town of Milos. The route to the top is clearly marked as “Kastro”, meaning “castle”. Even though the Venetians conquered Milos during the 13th century though, don’t expect to see a proper medieval castle.

On the way to the top, you will pass by a few of the famous white-washed churches with blue domes. 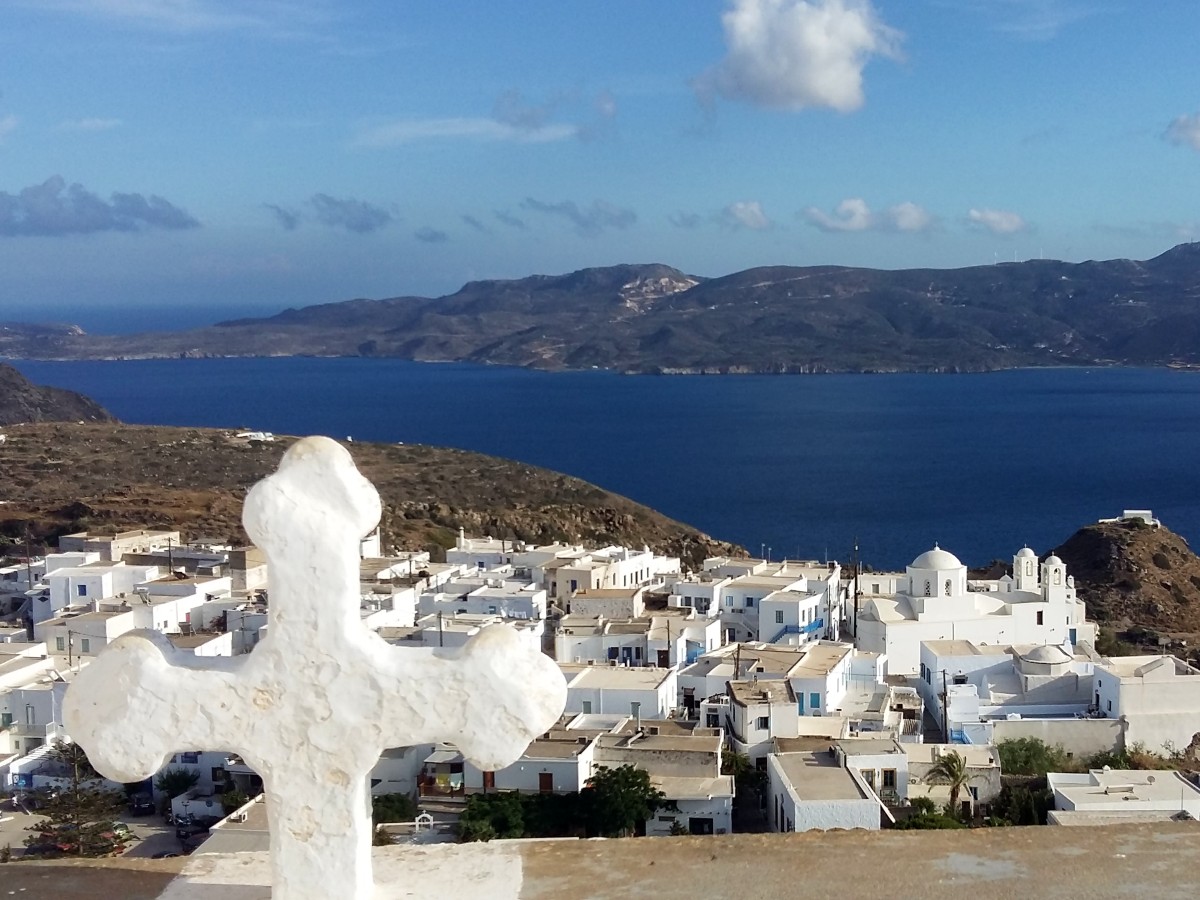 Eventually you will reach the top, where you will find the 200-year-old Panagia Korfiatissa church, dedicated to Virgin Mary. If it’s open, definitely check the interior, where you can see several religious artefacts from the past 500 years.

Tip – allow plenty of time to walk up, as you will want to enjoy all the beautiful views. An hour should be sufficient for most people, but don’t underestimate the time you’ll need to take photos! Also, make sure your battery is properly charged before you head out to see the sunset… 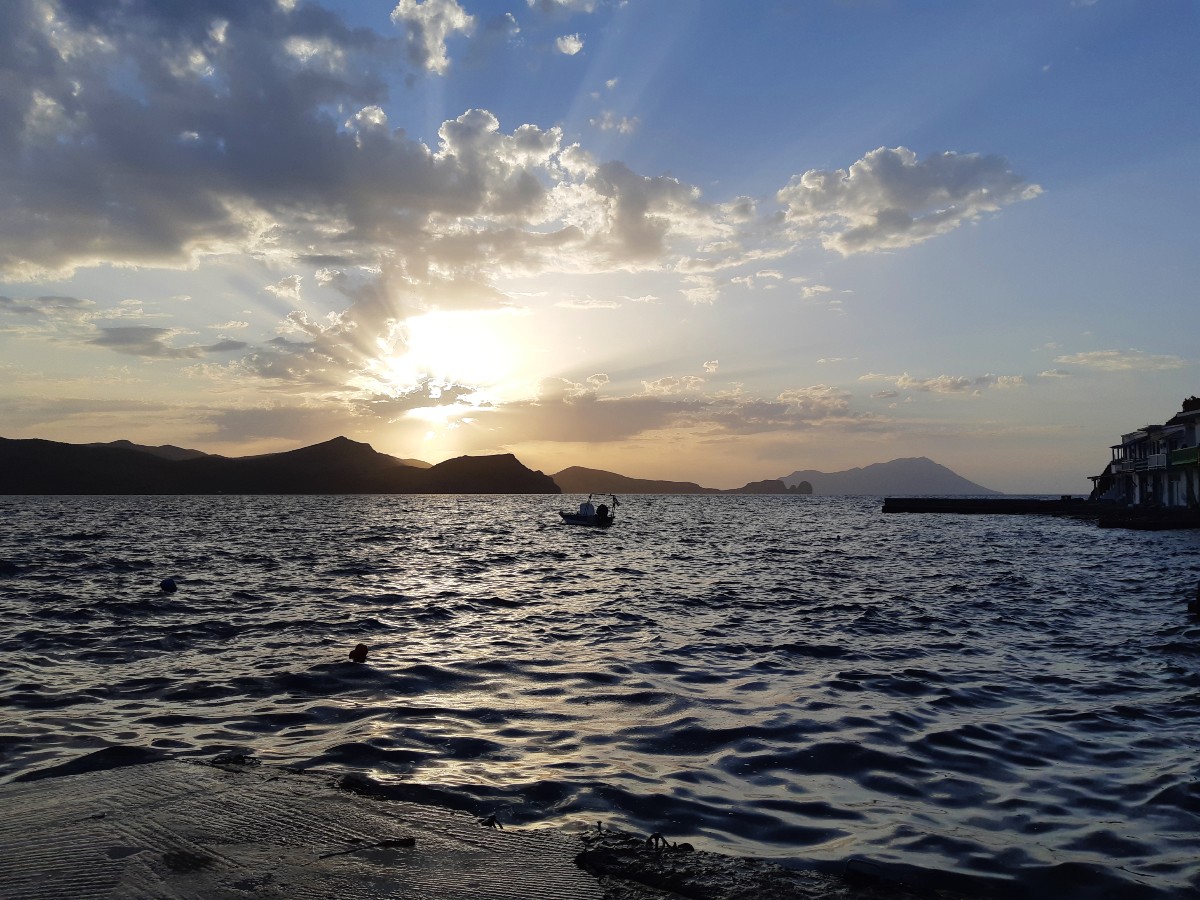 Other great sunset spots are the fishing village of Klima, as well as Papikinou beach, just opposite the popular taverna “O Chamos”. More on this later.

The Catacombs of Milos

Did you know that Milos is home to some of the very few known catacombs throughout the whole of Greece? They may not be as extensive or famous as the catacombs in Rome, but they are very important nevertheless. 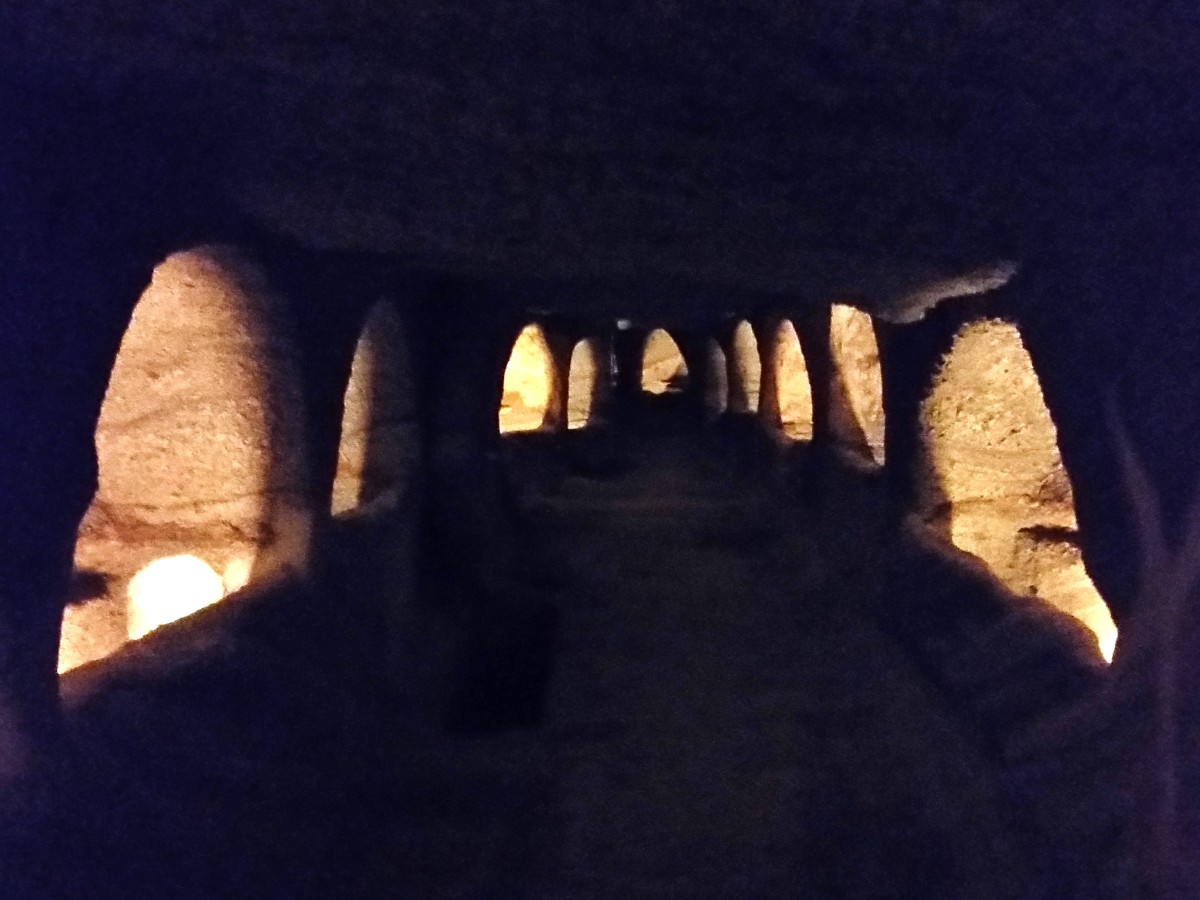 The catacombs in Milos served as the first proto-christian cemetery, during the period 1st-6th century AD. It is estimated that around 8,000 people in total were buried in the catacombs, at a time when Christianity was not the mainstream religion. The site was abandoned after the big earthquakes that took place in the 6th century.

This unique archaeological site was discovered in 1844, by which time it had already been looted. The area was researched properly several decades later.

Several artefacts have been excavated in about 200 metres of corridors, such as glass vessels, pendants and other burial objects. The findings have helped archaeologists understand the burial practices and rituals of the times, and also other aspects of people’s lives, such as diet.

The catacombs in Milos are located near the village of Tripiti, not too far from Klima. There are walking paths that connect these areas. They can be visited on a short, guided tour with a guard.

The only other place in Greece where you can see catacombs is in Thessaloniki, underneath the church of Agios Dimitrios.

The Ancient Theatre in Milos

A short walk from the Catacombs, you will also find the Ancient theatre in Milos. This amphitheatre was probably built during the Hellenistic period, but the excavated remains date from the Roman era. 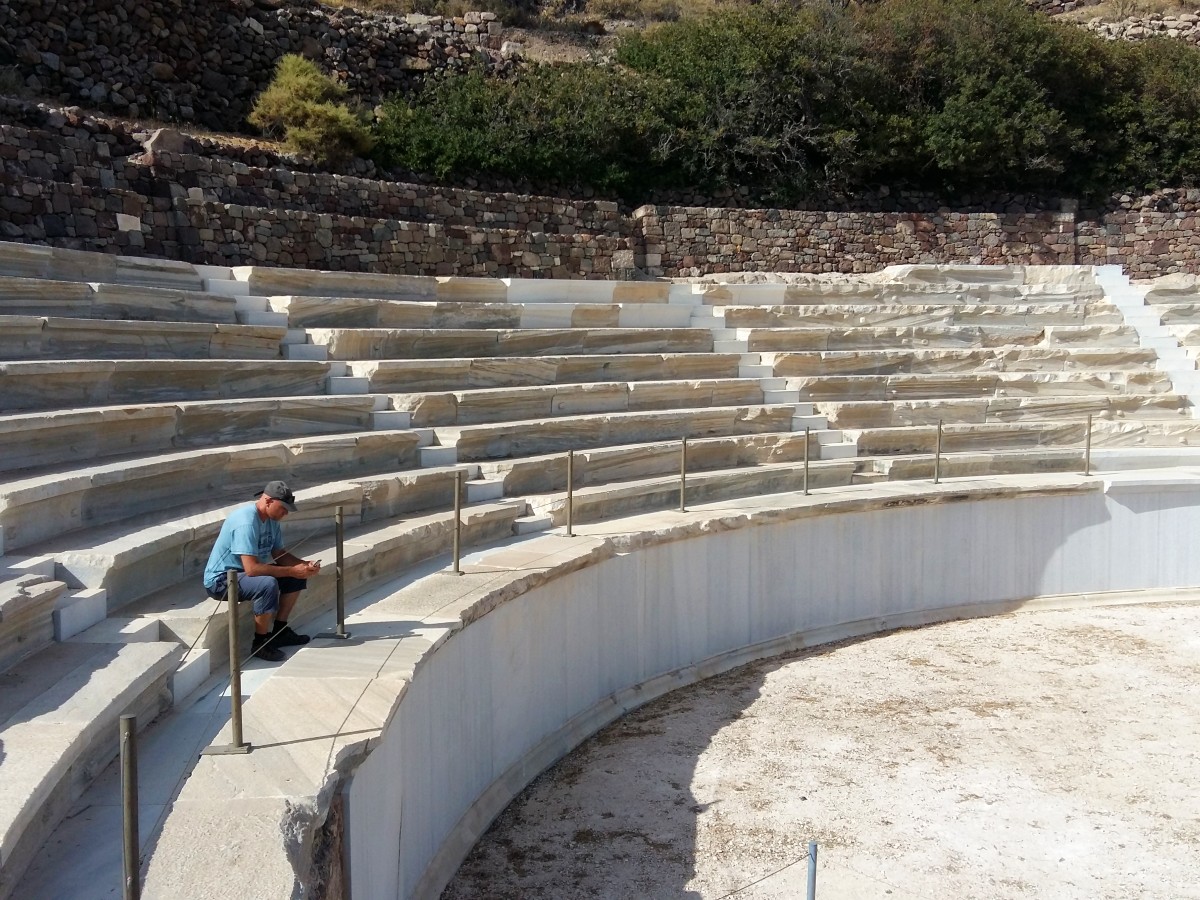 It is estimated that the theatre could originally accommodate an audience of up to 7,000 people. These days, it is open to visit at all times, and occasionally hosts events and performances.

Its current capacity is much smaller, as it can host about 700 people. Ask around if there are any events at the time of your visit.

The statue of Venus of Milos

When it comes to ancient Greek statues, few are as iconic as the Aphrodite of Milos statue. Best known as Venus of Milos, it is a truly incredible work of art, exalting female beauty. Photos don’t really do it justice though! 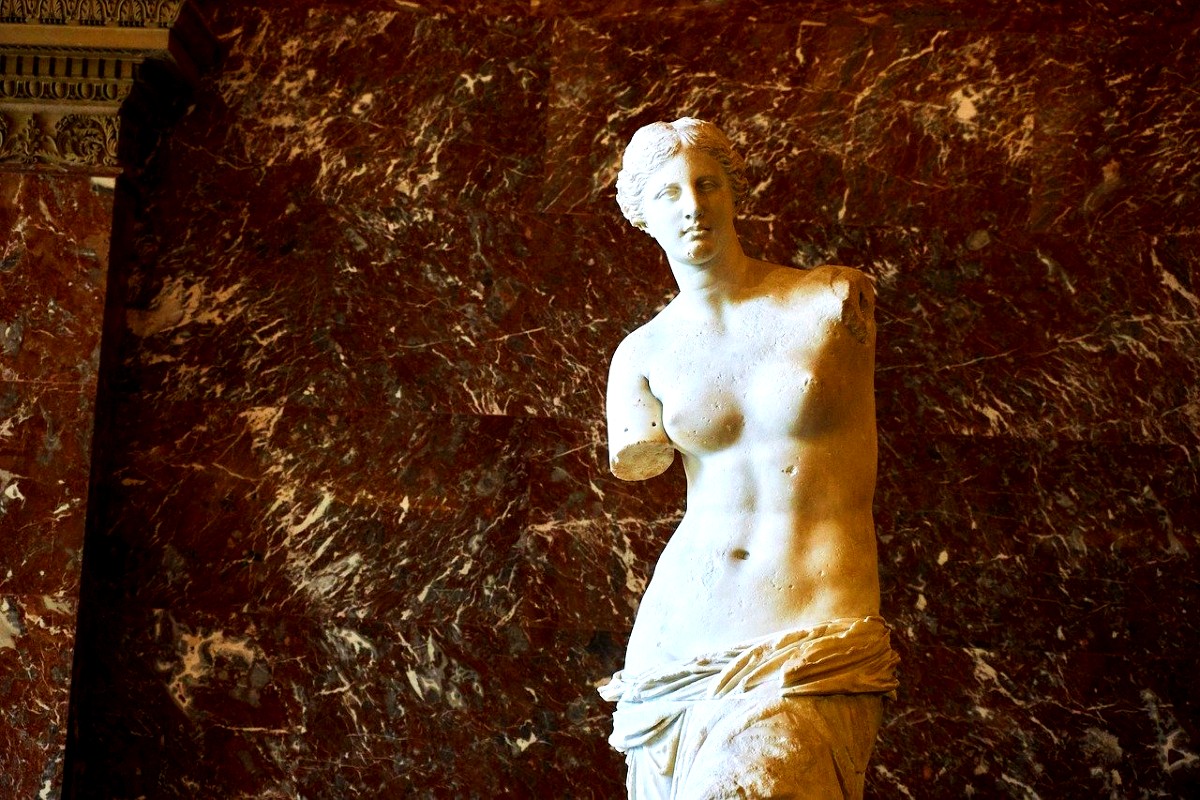 The original statue can be found in the Louvre, in Paris. It is made out of marble from Paros island, and is just over 2 metres tall. There seems to be a debate over the exact time when it was constructed, or who the sculptor was. It is estimated that it was created during the Hellenistic period, possibly around 150-100 BC.

The statue was discovered in pieces in a field in Milos, in 1820. At the time, Greece was still part of the Ottoman Empire, and it wasn’t unusual for Greek antiquities to be retrieved and exported abroad.

Venus of Milos was originally a gift to King Louis XVIII, who later donated it to the Louvre. The exact details of how the statue made it to France seem to be unclear, as there are several theories and speculations. It is likely that French, Ottoman and possibly Greek people were involved in the process.

In later years, the Louvre offered a replica, which can be seen today in the Archaeological Museum in Milos. Even though it’s only a modern plaster cast, I found it really impressive. 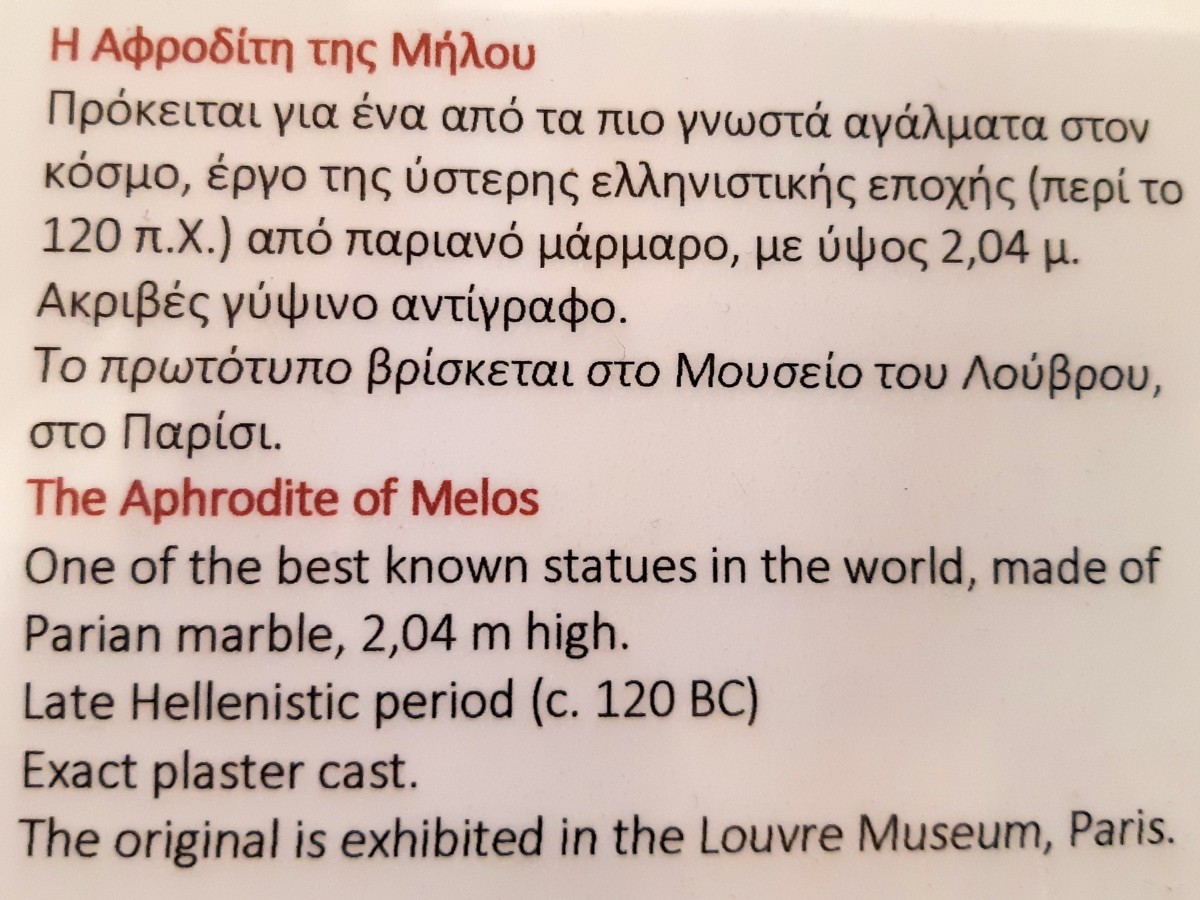 Today, there is a sign at the location where the statue was found. You can easily walk there from either the Catacombs or the Ancient Theatre.

When it comes to Greek food, I am rather biased – I like it a lot! Food in Greece varies a lot between areas, and the Cyclades are home to some pretty unique flavours. 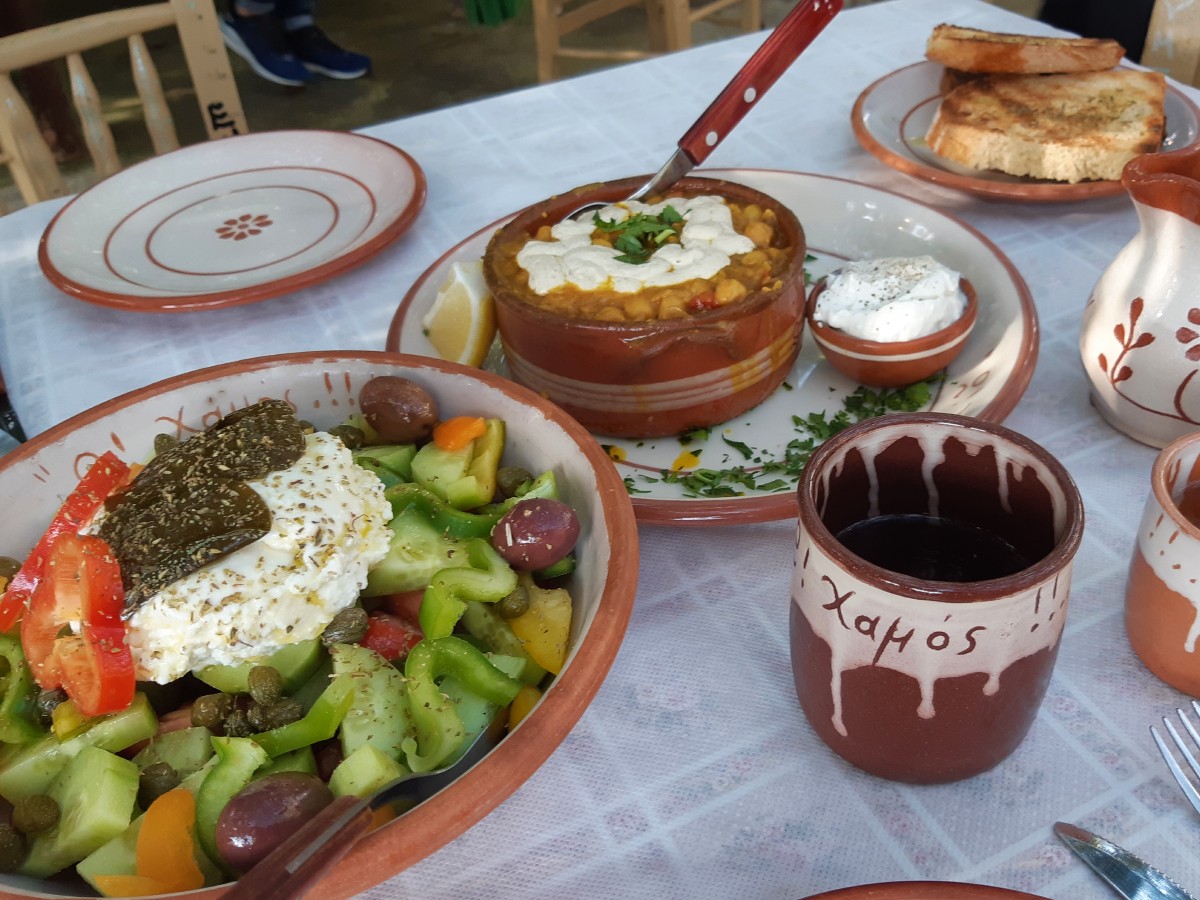 In my experience, Milos is one of the best Cycladic islands when it comes to Greek food. We have eaten in over ten restaurants in two trips, and they were all way above average!

If I could single out three restaurants, I would mention “O Hamos” near Adamas, “Medusa” in Mandrakia, and “Bakaliko tou Galani” in Triovasalos. I would return to either of these in a heartbeat!

I actually liked the food in Milos so much, that I wrote a dedicated article about where to eat in Milos!

In terms of local dishes, my favourite one was pitarakia, a type of local pie. I didn’t care much about the karpouzopita (watermelon pie), but you should try it if you get the chance. Milos is also famous for its amazing local cheeses, goat meat, aromatic honey and capers.

I could mention several more reasons to visit Milos, but these should be enough to get you started. If you are planning to go to Milos and have further questions, don’t hesitate to ask in the comments section!