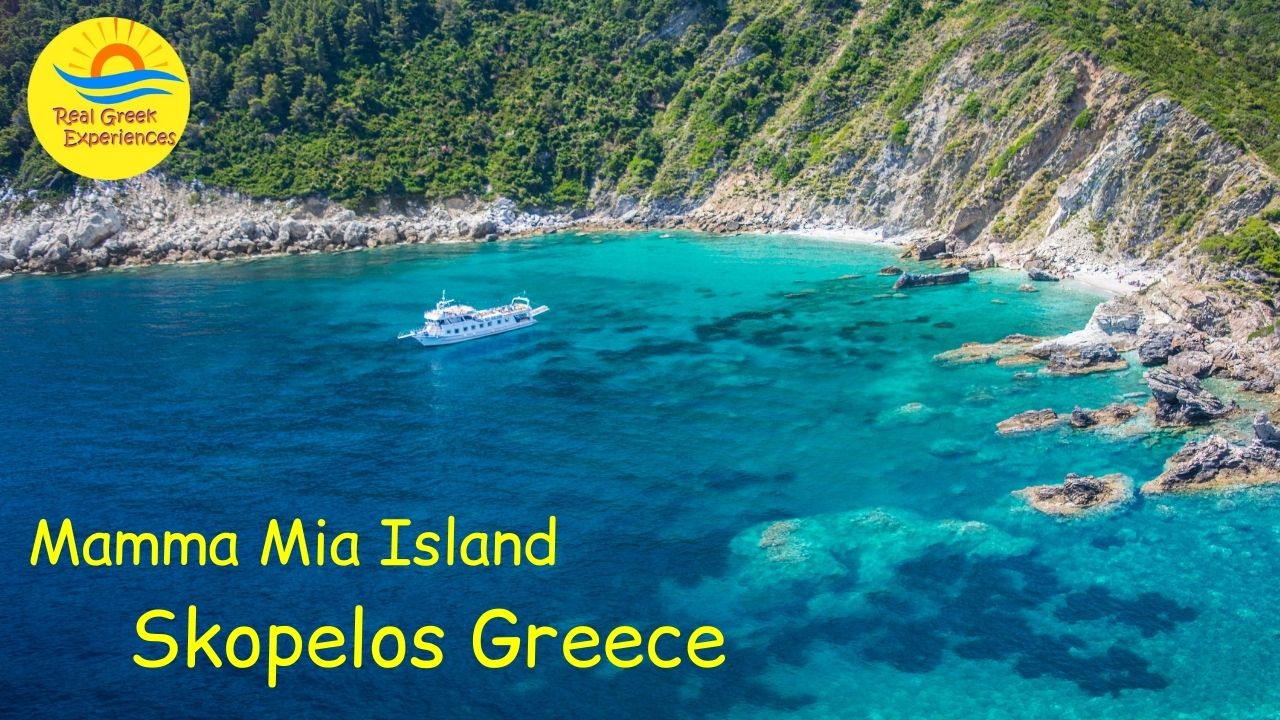 Mamma Mia, the famous Hollywood movie, was filmed in Greece. Most of the filming took place on the Greek islands of Skopelos and Skiathos. Read on for some interesting trivia!

Mamma Mia and the fictional Greek island of Kalokairi

Mamma Mia is a famous 2008 Hollywood musical, based on songs by the popular Swedish group ABBA. The movie is set on a small Greek island called Kalokairi.

While the island itself is fictional, the green landscapes, olive groves and crystal-clear waters presented in the movie are 100% real! 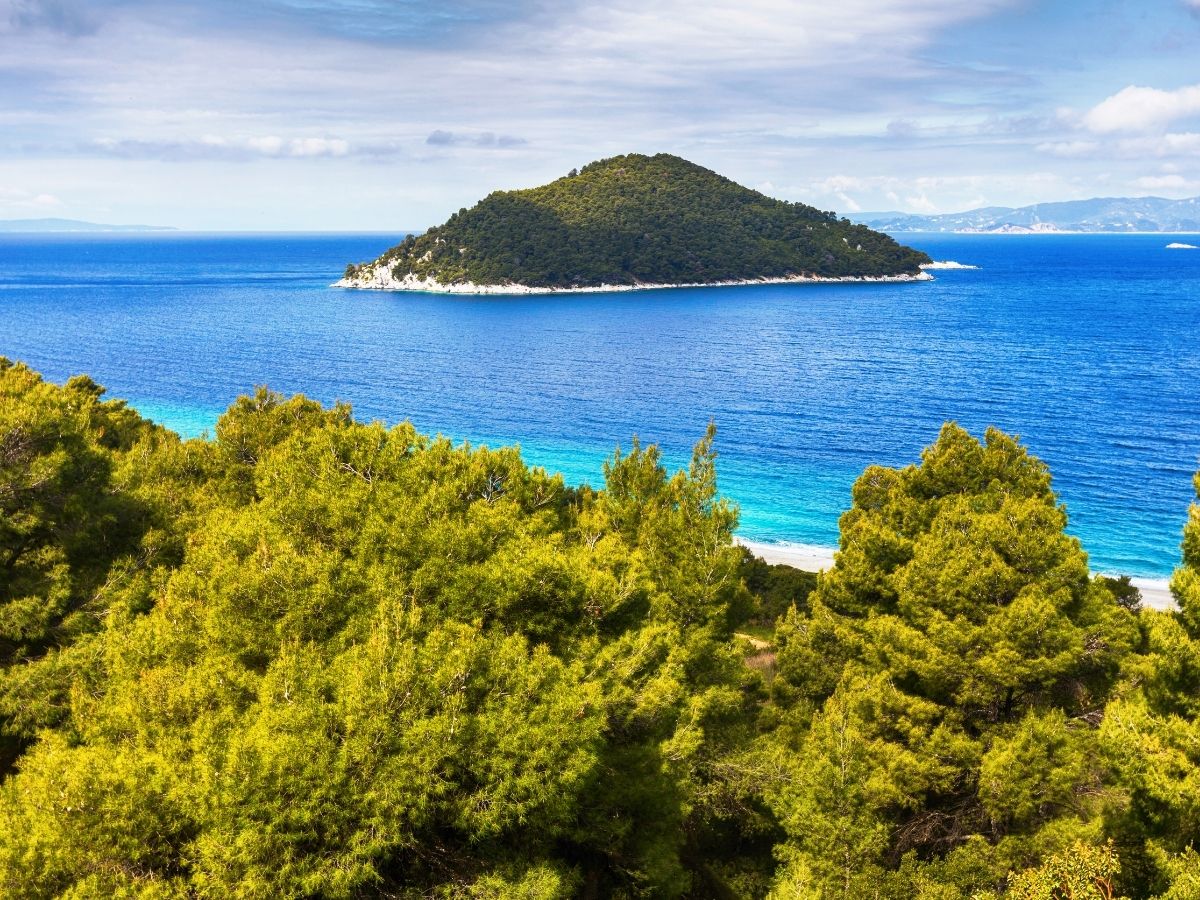 So, where was Mamma Mia filmed? Most of the actual filming took place at one of the Sporades islands, Skopelos. Other filming spots in Greece include places on the nearby Skiathos island, and the Pelion peninsula on the Greek mainland.

The scenes shot on Skopelos and Skiathos instantly put the two beautiful Greek islands on the map. Many people come to Greece because they want to visit the picturesque places where the original “Mamma Mia the Movie” was made.

What is the movie Mamma Mia about?

Mamma Mia describes the story of a young bride to be, Sophie. Sophie grew up with her single mother, Donna, who runs a small hotel, called Villa Donna. She has never met her father, and her mother hasn’t told her much about him.

Going through her mother’s diary, Sophie finds out that Donna had romantic relationships with three different men a few months before she was born. 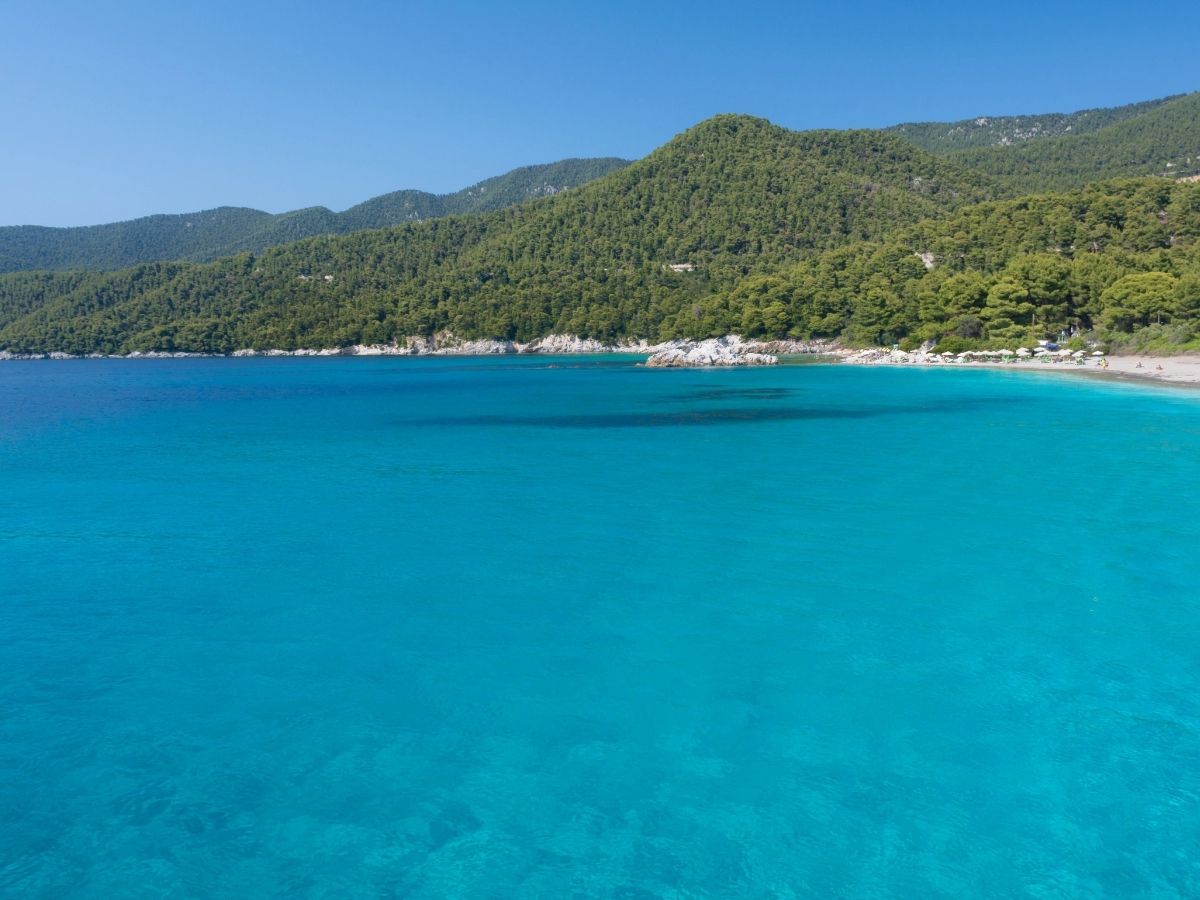 Being uncertain about who her real father is, Sophie invites all three of them to her upcoming wedding. During the opening scene, we learn that their names are Sam Carmichael, Bill Anderson, and Harry Bright.

They all arrive, thinking that the wedding invitations came from Sophie’s mother. When Donna meets the three men, she is shocked, and asks them to leave the island.

So, how will the wedding take place, and who will give Sophie away? I won’t reveal any more of the plot – you can watch the movie and find out!

The movie is based on famous ABBA songs.

Where was Mama Mia filmed – All locations in Greece

Most of the Mamma Mia film locations where the outdoor scenes were filmed were on Skopelos island. Additional shots were taken on Skiathos island, and at Damouchari beach in the Pelion peninsula, close to Volos.

Other film locations include London city and Pinewood Studios, in the UK.

The film’s main location site was Kastani beach, on the south west coast of Skopelos. Kastani is a beautiful sandy beach with wonderful sunset views. A jetty and beach bar were built as a setting for the movie, and were taken apart later. 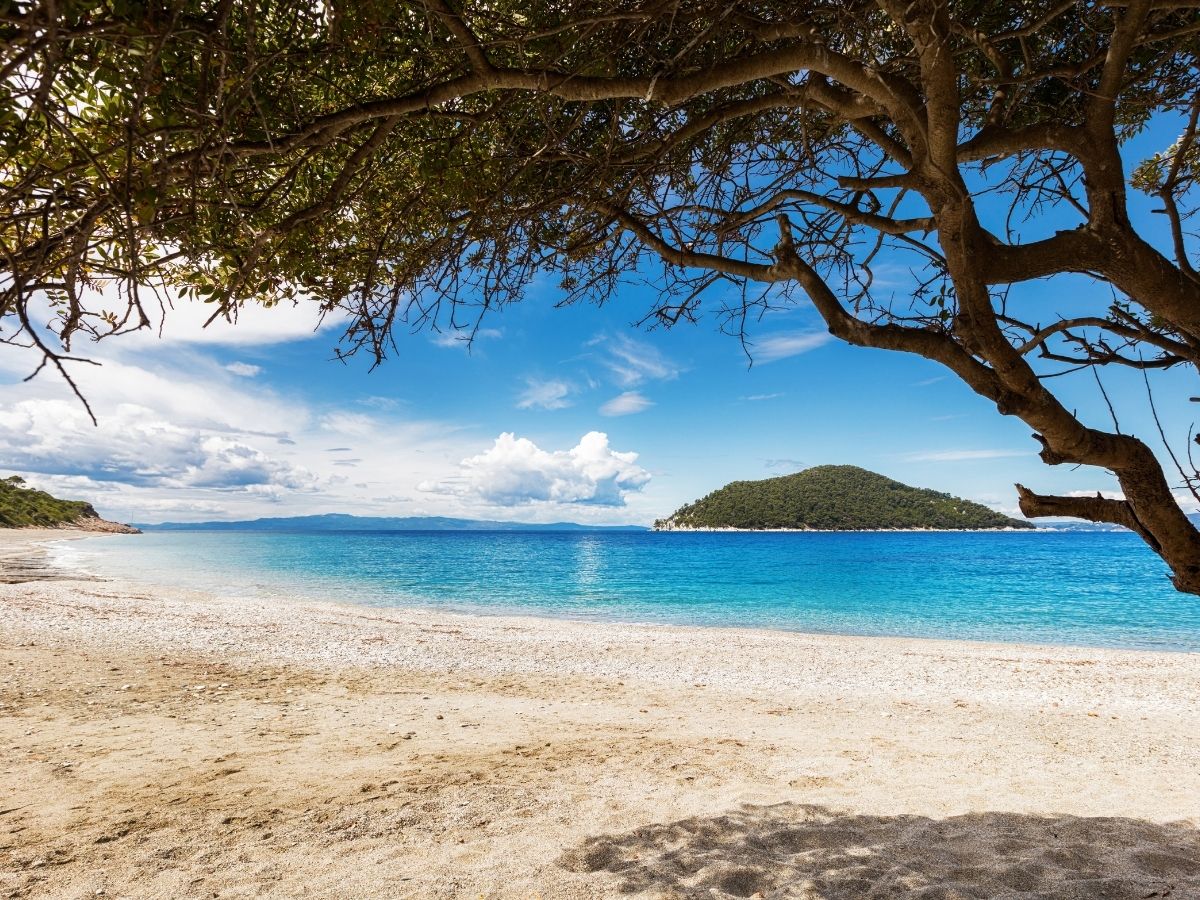 The location of the fictitious Villa Donna hotel was on a steep cliff above Glysteri Beach, on the island’s east coast. This was also the area where the cliff jumping scene, including Sophie and her three dads, was made. However, the scenes inside the hotel were shot in the studio.

Sophie’s wedding scene took place at the small Agios Ioannis chapel, on the north-east coast of Skopelos. This iconic little church is one of the most recognizable filming locations, and has become a popular tourist attraction.

This Mamma Mia island tour takes you to all filming locations in Skopelos. It includes free time to go to the beach and a Greek tavern!

The old port in Skiathos served as a filming location for the movie. This is where Sam and Harry arrive in Greece, and where Bill Anderson’s yacht remains moored for a while.

Scenes shot at the Pelion peninsula

Another location for Mamma Mia was Pelion, a rocky peninsula on mainland Greece, close to Volos town. Damouchari village and the Blue Beach, on the east coast, was the main shooting area in Pelion. 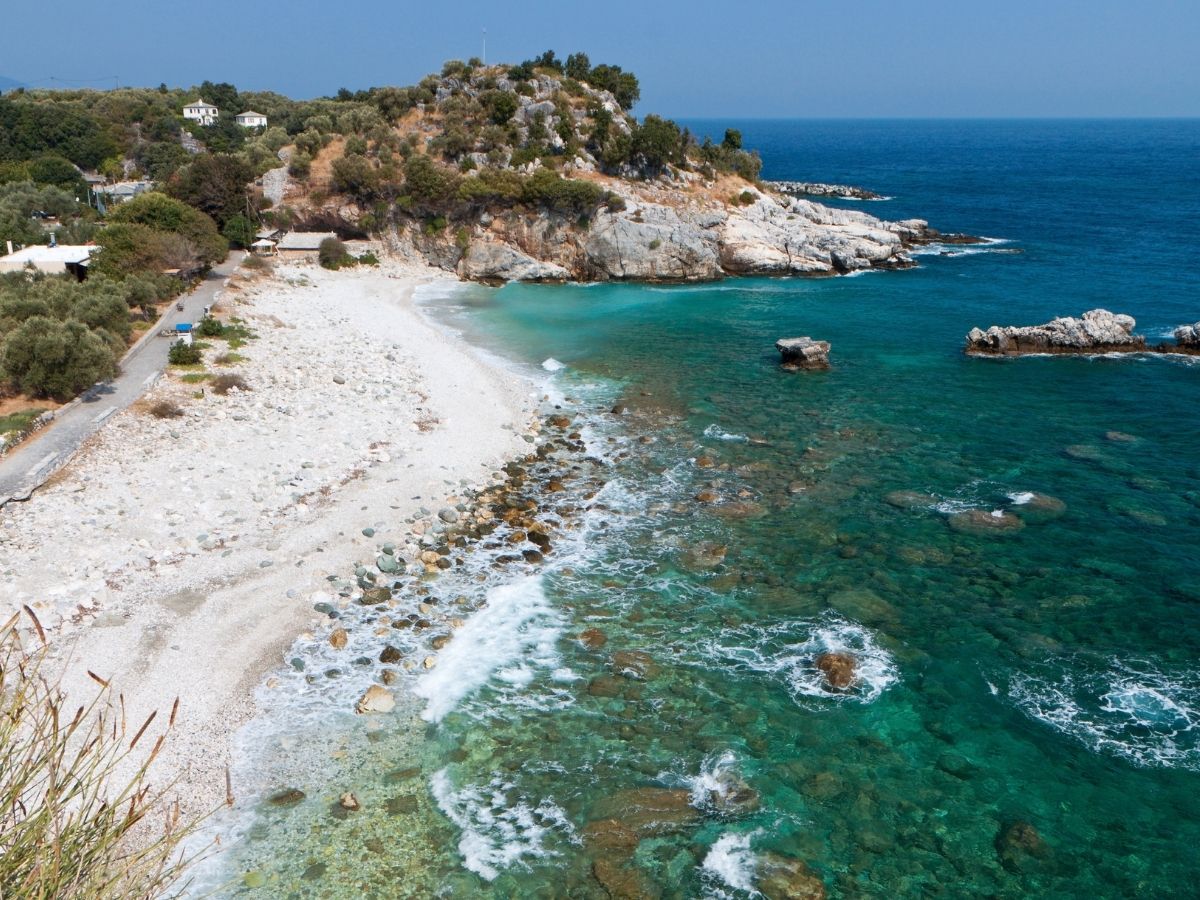 Some background on “Mamma Mia” the movie

The original Mamma Mia film is based on a theatrical / musical performance which premiered in 1999 in London. Featuring classic ABBA songs, such as “Dancing Queen”, it had tremendous success in the UK, as a Broadway musical and worldwide.

The writer, Catherine Johnson, was nominated for the 2002 Tony Award for the Author of Musical.

Among others, the Mamma Mia cast includes Meryl Streep, Pierce Brosnan, Amanda Seyfried, Christine Baranski, Julie Walters and Colin Firth. All the actors did their own singing in the movie, some more successfully than others 🙂

According to various reports, some of the cast and filming crew stayed at two hotels in Skiathos, the Skiathos Palace Hotel and the Skiathos Princess Hotel. Others stayed at villas and rooms around both Skopelos and Skiathos. 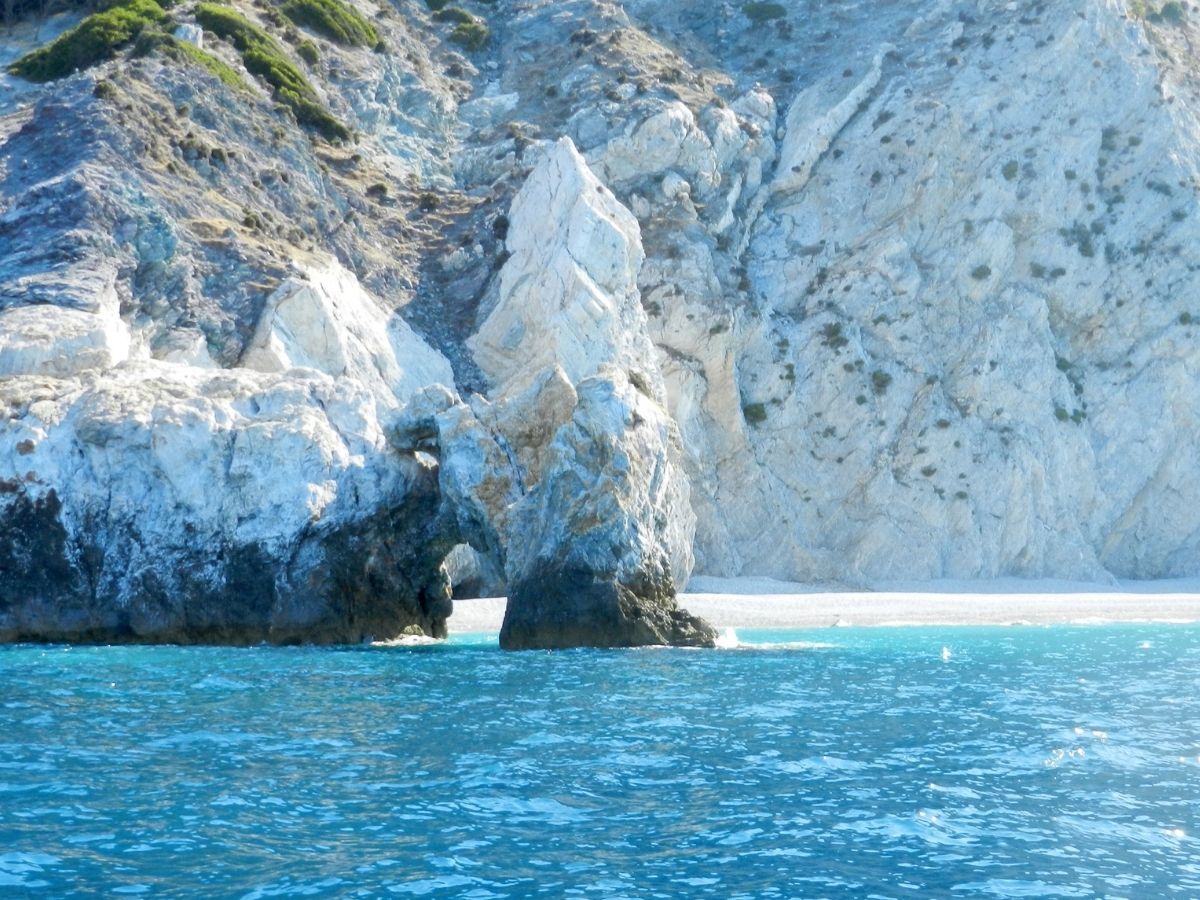 In 2018, a sequel, “Mamma Mia! Here we go again” was filmed. Featuring Lily Jones, Andy Garcia and Cher, this movie explore Donna’s past and her relationships with the three fathers. This movie was filmed in Vis, the furthest inhabited island off mainland Croatia.

How to get to Skiathos and Skopelos

If you’ve seen Mamma Mia movie, you were definitely impressed by the amazing nature and gorgeous beaches! So, how can you get to Skiathos and Skopelos? 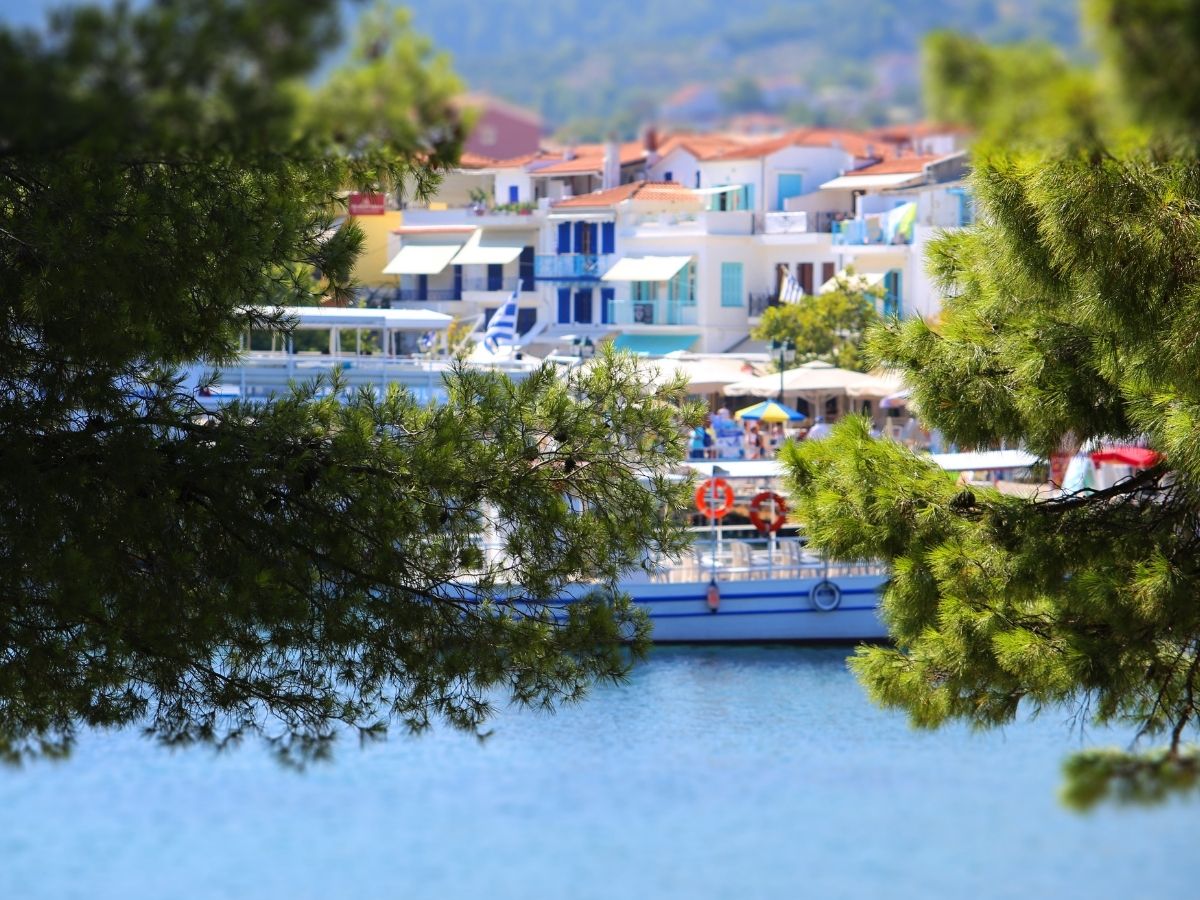 These two islands are located in the Northwest Aegean Sea, in the Sporades group of islands. Skiathos has an international airport and a ferry port, while Skopelos only has a ferry port.

During spring, summer and autumn, there are direct flights to Skiathos from several airports in Europe. In addition, there are domestic flights from Athens, the Greek capital, year-round. This is the fastest and overall best way to get to Skiathos. 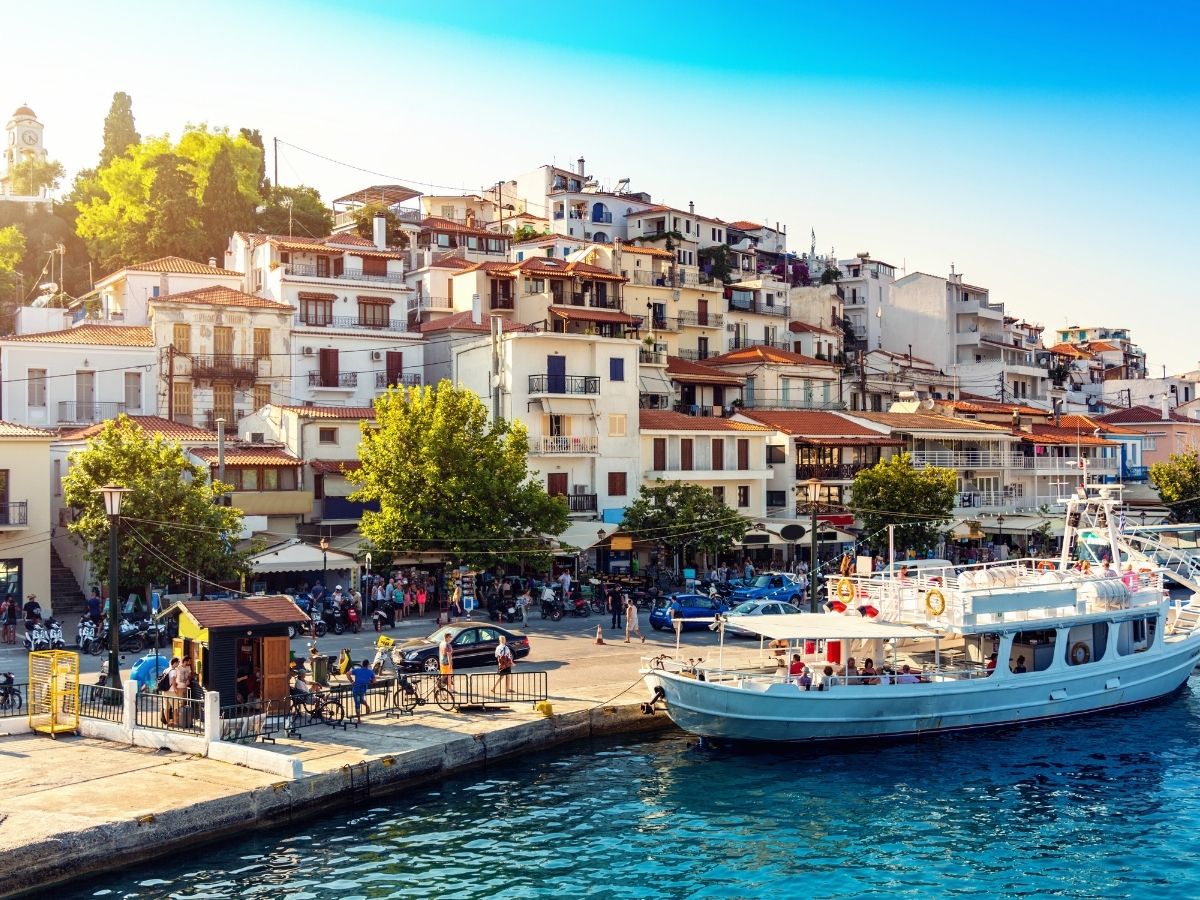 Ferries to Skiathos also depart from the smaller port of Agios Konstantinos, on mainland Greece, and Mantoudi, in Evia island.

The best way to get to Skopelos is to take a quick ferry trip from Skiathos island.

Skopelos has three ports: Glossa port on the west coast, about 20 kms from Skopelos Town, Agnontas, a small port closer to the south coast of Skopelos, and Skopelos port. 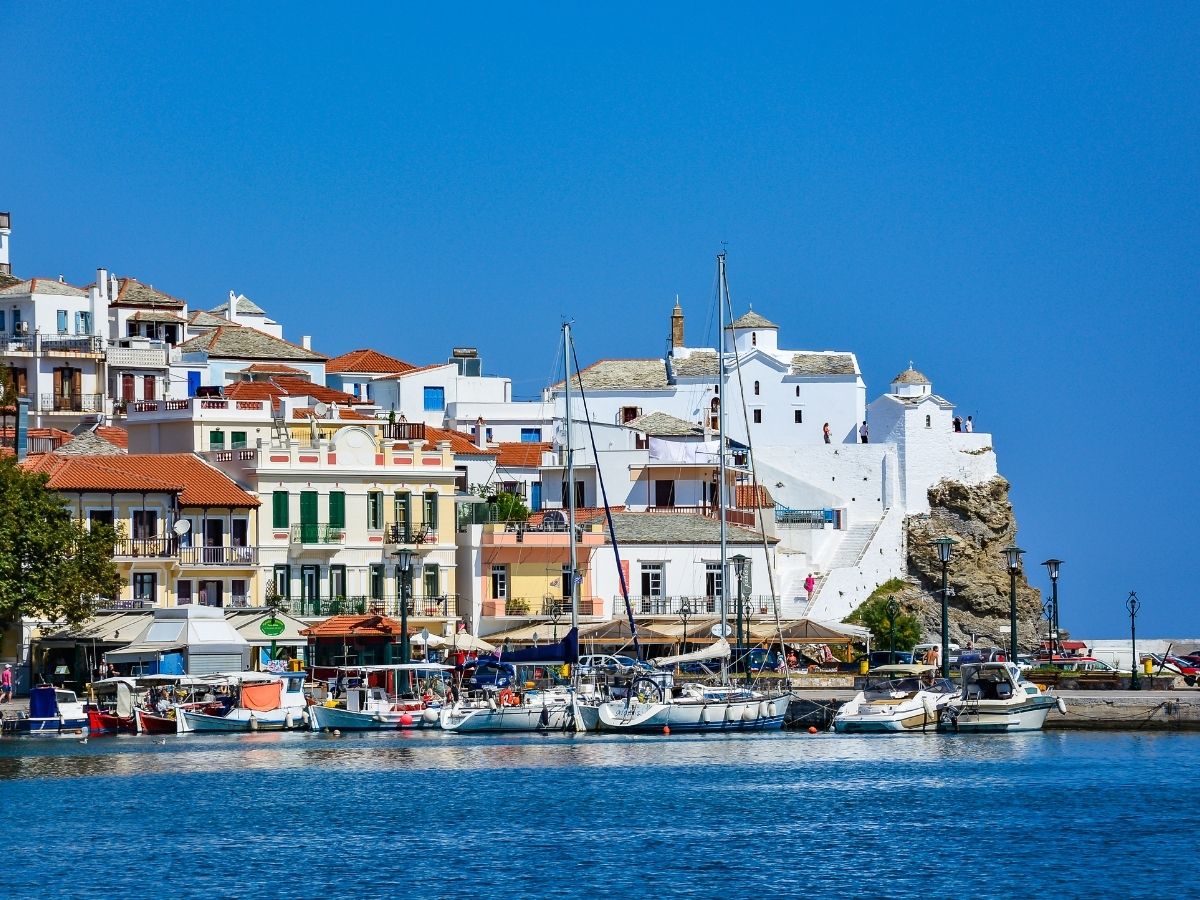 Getting to Glossa from Skiathos port is quicker, but if you are staying in Skopelos town it might be best to take the direct ferry.

If you are already travelling around mainland Greece, you can access Skopelos by sea. Ferries depart from the ports of Volos, Agios Konstantinos and Mantoudi in Evia island.

You can check all ferry routes and book your ferry tickets at Ferryscanner. 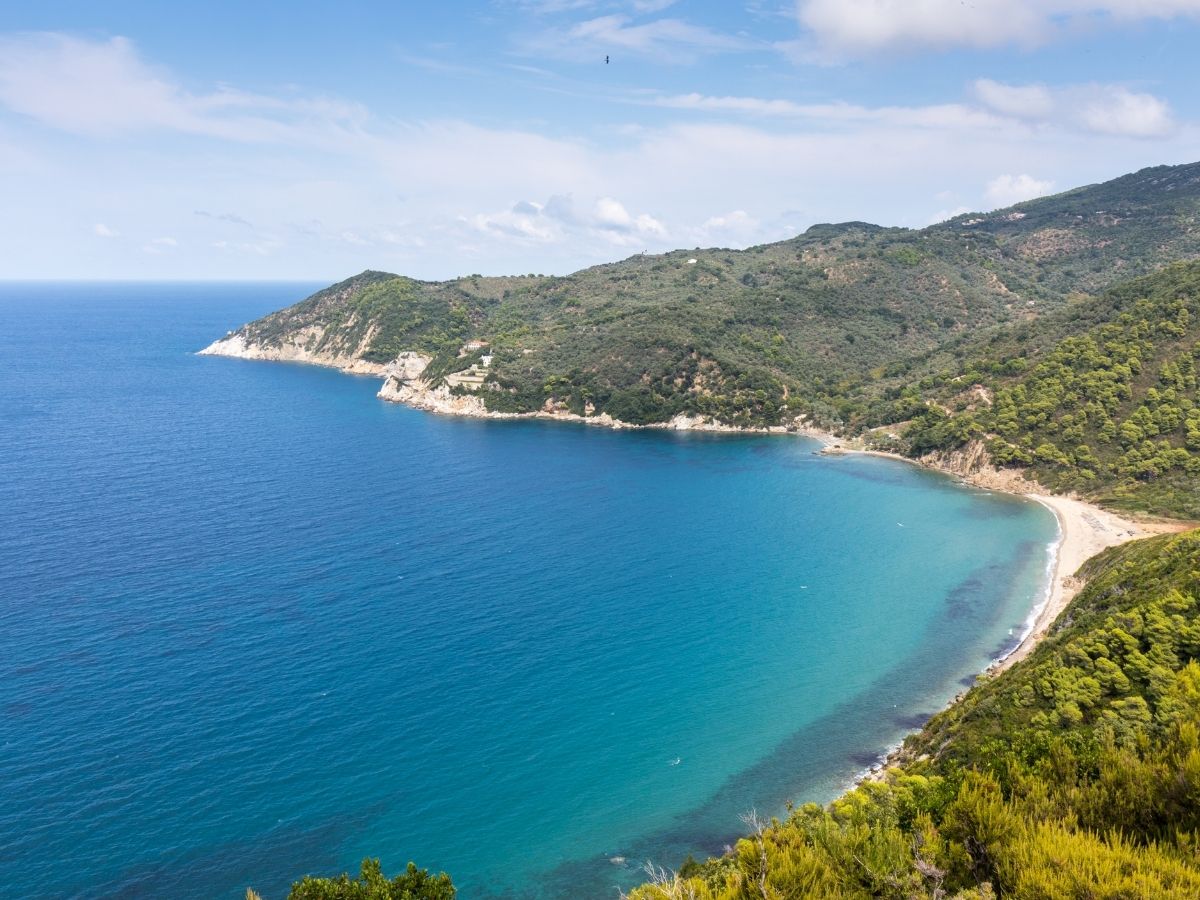 Here are a few questions that people ask often:

Is the island in Mamma Mia real?

The Mamma Mia film takes place in the fictional island of Kalokairi in Greece. In reality, Mamma Mia filming locations are the Greek islands of Skopelos and Skiathos, as well as the Pelion peninsula on the Greek mainland.

Can you visit where Mamma Mia was filmed?

You can easily visit the places where Mamma Mia was filmed. Skiathos, one of the two islands, has an international airport and there are direct connections to and from several European countries. From Skiathos, it’s only a quick ferry crossing to Skopelos.

Can you stay in the Mamma Mia hotel?

The iconic hotel in Skopelos where Mamma Mia was filmed, Donna’s Greek villa, was only a movie set. However, there are plenty of other hotels to stay on Skopelos.

Where was the 2nd Mamma Mia filmed?

The 2nd Mamma Mia movie was filmed on the Croatian island of Vis. This movie goes deeper into the life of Sophie’s mother.

Is there a Mamma Mia 3 coming?

There are rumours that a third sequel is around the corner, but nothing has been confirmed at the time of writing. Watch this space!

If you enjoyed reading this article about Mamma Mia island, and where to find the shooting locations, save it on Pinterest! 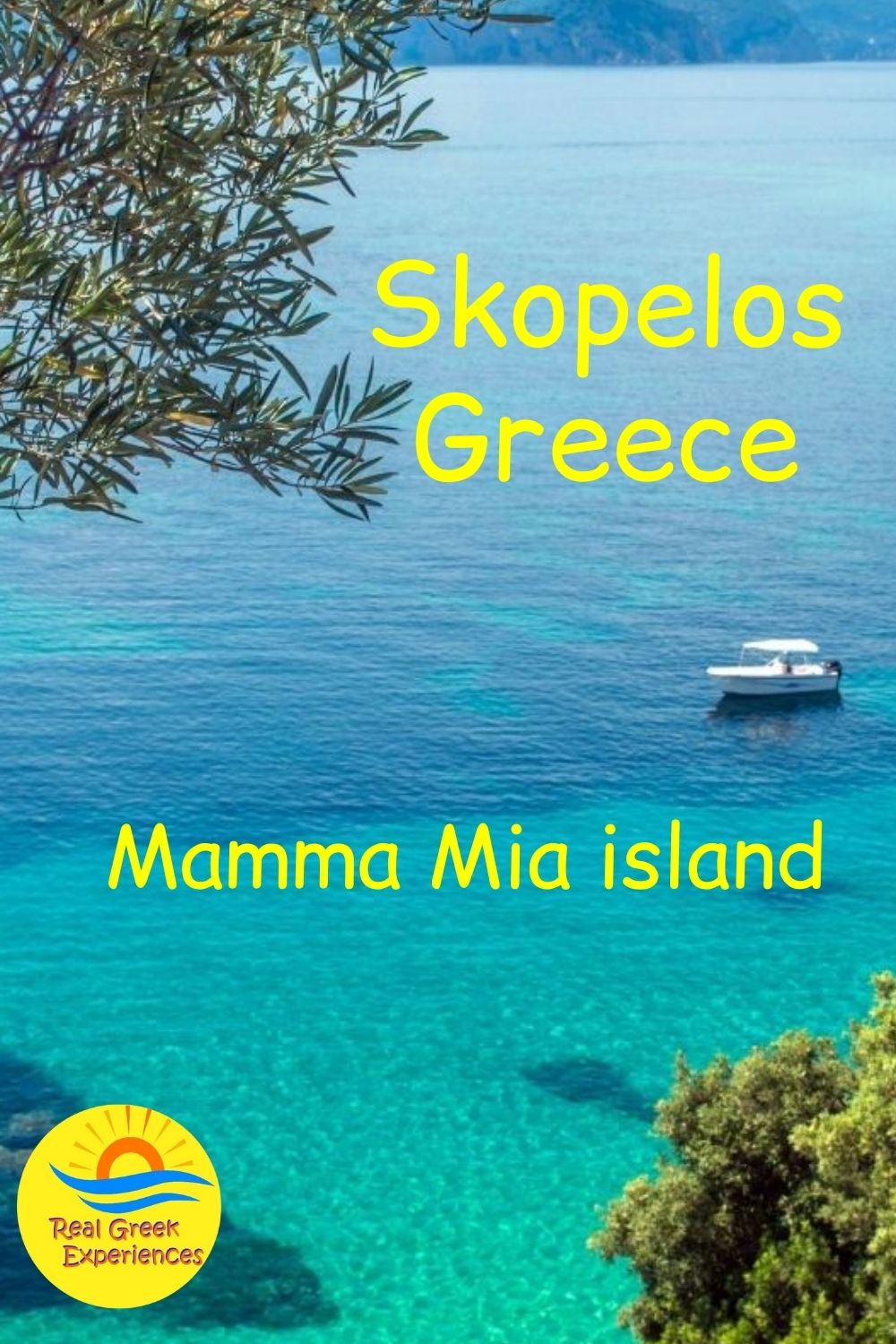 If you liked the Mamma Mia movie, you might be interested in these other movies about Greece:

Hi! I’m Vanessa from Athens. I had great fun watching Mamma Mia, and was extremely impressed with Meryl Streep’s performance and singing – she is just amazing! At the time of writing, the movie is available on Netflix, so if you haven’t seen it check it out. I’m sure that, even if you aren’t that keen on musicals, you’ll love the incredible landscapes and pristine beaches in Skopelos and Skiathos!