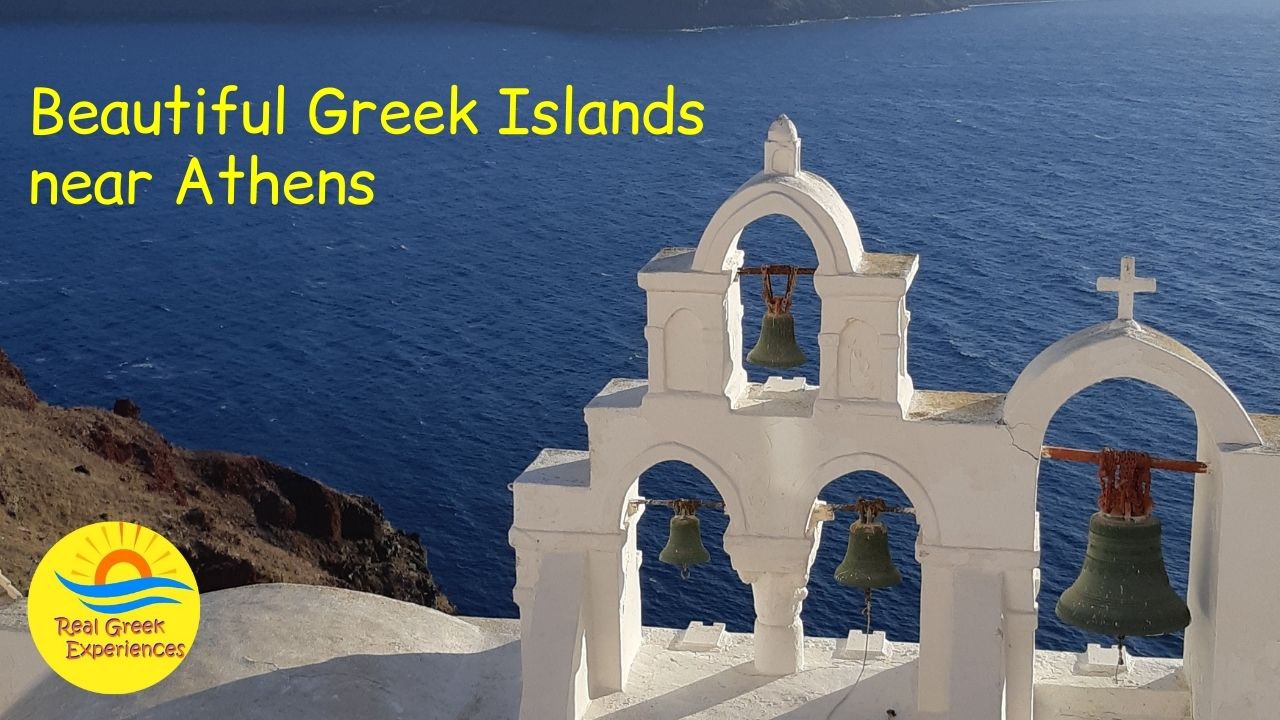 There are many beautiful Greek islands near Athens that you can easily visit on a day trip or a longer vacation. This guide lists some of the best island destinations close to Athens, and explains what to do and how to get there.

Some Greek islands are very close to Athens, the Greek capital. You can get there in about an hour or two on the ferry from one of the ports in Athens.

You can book your ferry tickets online on Ferryscanner, a search engine where you can easily compare routes, timetables and prices.

Other islands are further out, but are easily accessible on a quick domestic flight from the Athens airport. This includes the two most cosmopolitan islands, Santorini and Mykonos, but also Milos, Crete, Rhodes, Skiathos and a few more. 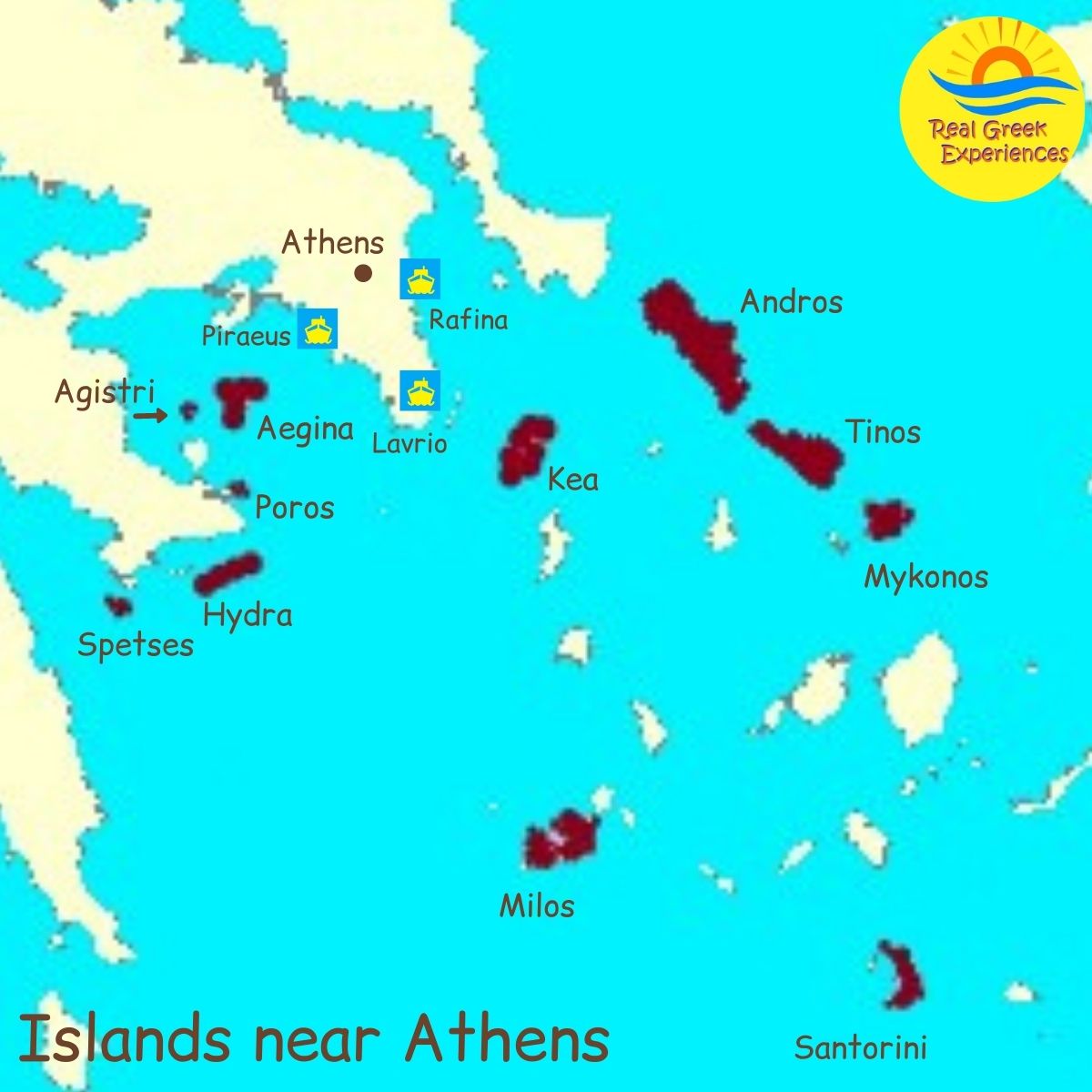 A few of these islands close to Athens are suitable to visit on a day trip. Most of them deserve more time, as there is lots to see and do. Here is some more information.

Aegina is the island closest to Athens. The sea dolphin from Piraeus port only takes 40 minutes to get to Aegina.

The island offers a good mix of history and nature. It’s a popular weekend destination with Athenians, and many of them own summer houses there. 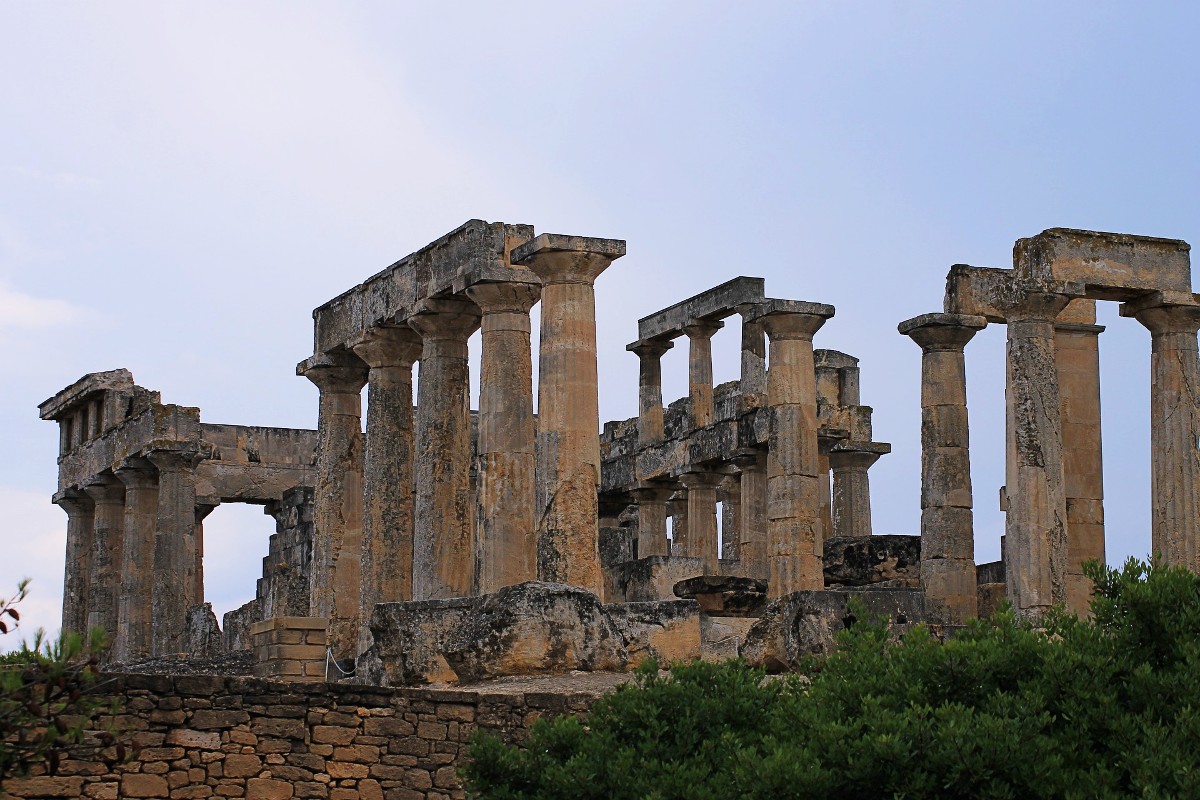 Some of the highlights in Aegina include:

Most of the beaches in Aegina, like Agia Marina or Klima, have tourist facilities. Still, you can also find a few secluded coves and natural beaches, like Kolona beach.

Overall, Aegina is an ideal destination for a day trip, but there’s enough to keep you occupied for a few days.

Agistri is a tiny island a short ferry ride from Aegina. Sea dolphins from the port of Piraeus take about an hour to get to Agistri.

Despite its proximity to Athens, Agistri is more relaxed than many other Greek islands. It’s a great destination if you’re looking for peace and quiet, combined with some of the best beaches in the Saronic Gulf. 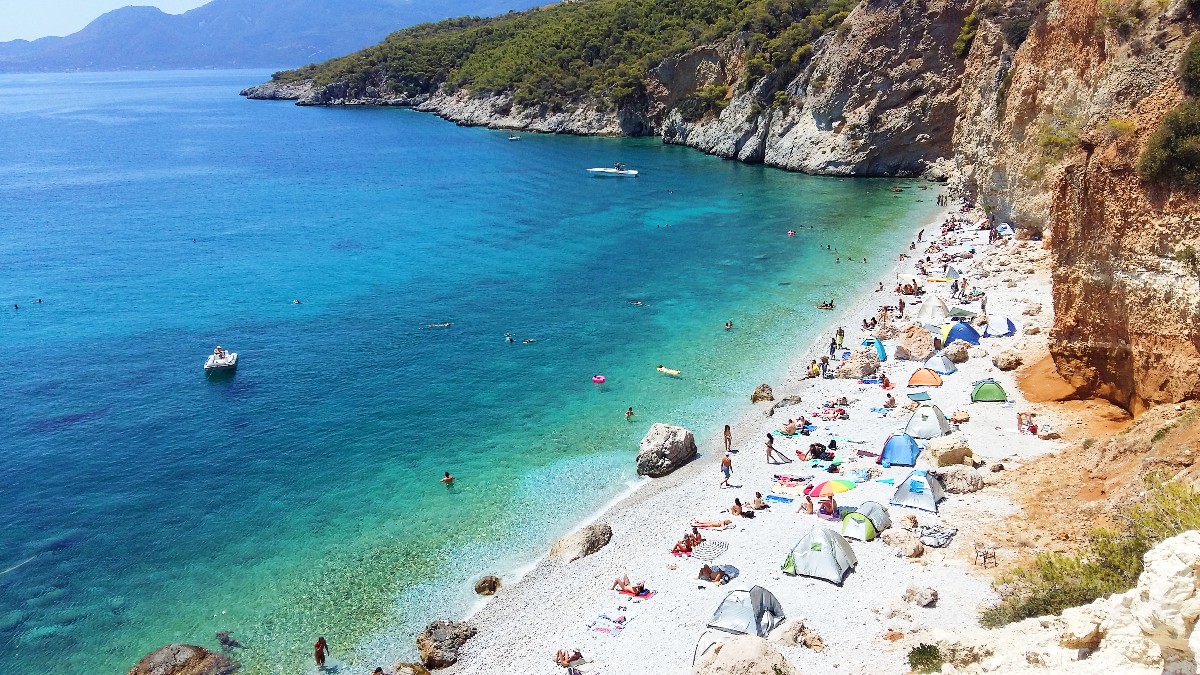 Here is a selection of the best things to do in Agistri:

Among the islands close to Athens, Agistri is probably the best if you want to escape the city life and spend time in nature. It’s suitable for a day trip, though people who like sandy beaches can easily spend a few days here.

There are also day trips to Aegina, Agistri and the uninhabited Moni island.

Poros, another Saronic island, is located just off the coast of the Peloponnese. It is 1 hour and 15 minutes away from Piraeus port on the flying dolphin.

Along with the nearby islands of Aegina and Hydra, Poros is often included in island hopping day trips from Athens. This is an alternative way to travel if you don’t want to rely on Greek ferries. 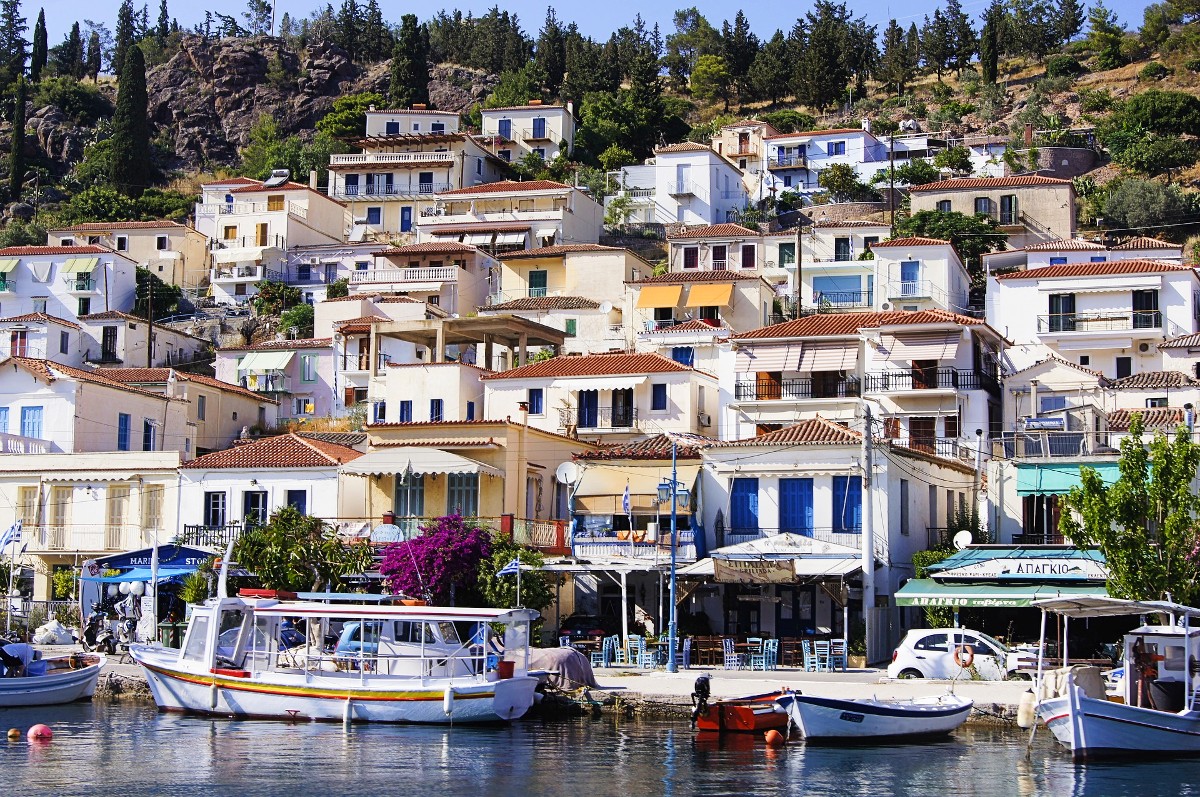 Here are a few of the best things to do in Poros:

Poros is one of the greenest Saronic islands and many of the beaches have natural shade. Visitors who like nature can explore the island on foot or by bicycle, and swim in the crystal clear waters.

Hydra is one of the most cosmopolitan Greek islands. At only an hour and a half on the flying dolphin from Piraeus, it’s a popular weekend destination for Athenians.

Known for its rich history and traditional architecture, Hydra is also an ideal destination for people who want to relax. The lack of motor vehicles on the island will make you think you’ve travelled back in time. 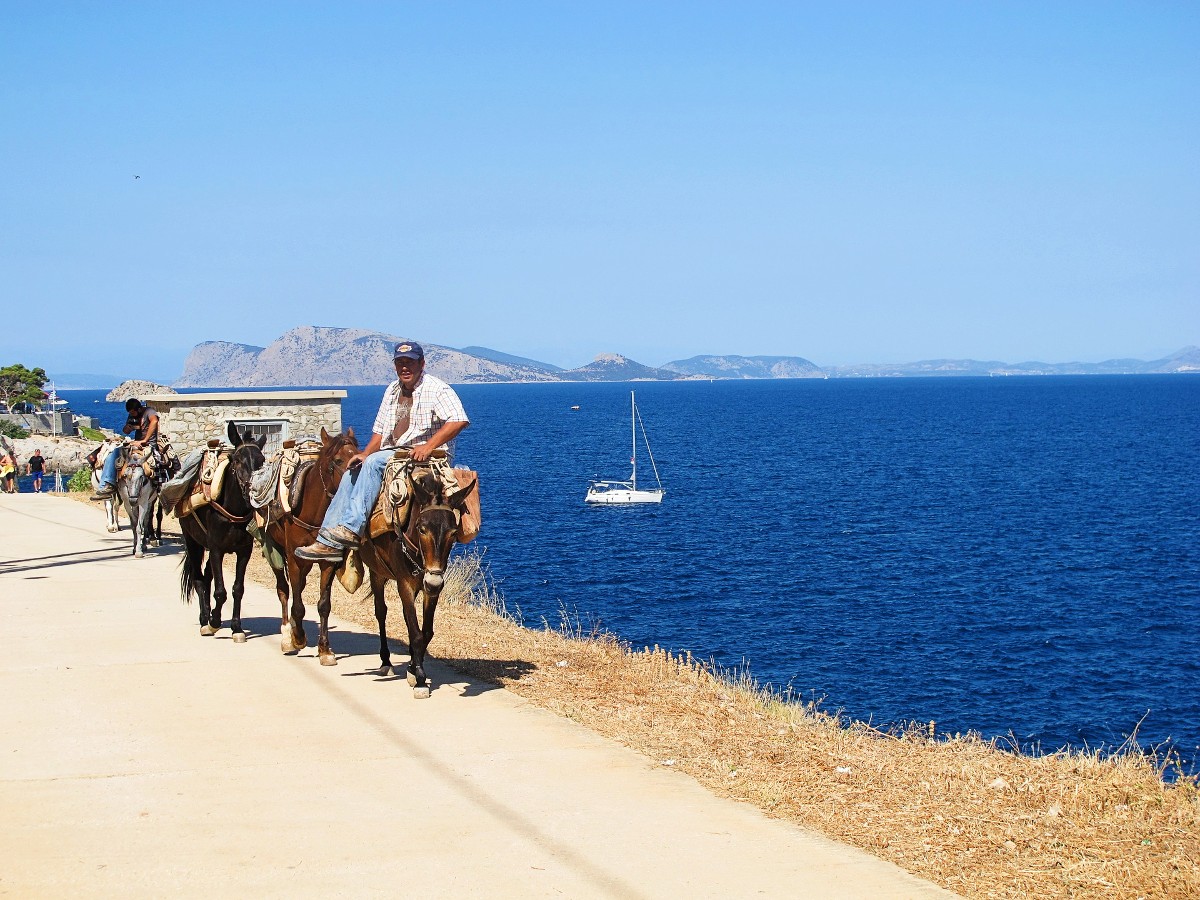 Here are some of the highlights of Hydra:

Spetses is another one of the Saronic islands. It’s the furthest one from Piraeus port, as it takes 2 hours and 15 minutes to get there on the sea dolphin.

The island is famous for its rich naval history, related to the Greek Independence Day, and it cosmopolitan culture. Ιt’s a popular island near Athens, not least due to its developed tourist infrastructure and the lack of motor vehicles. 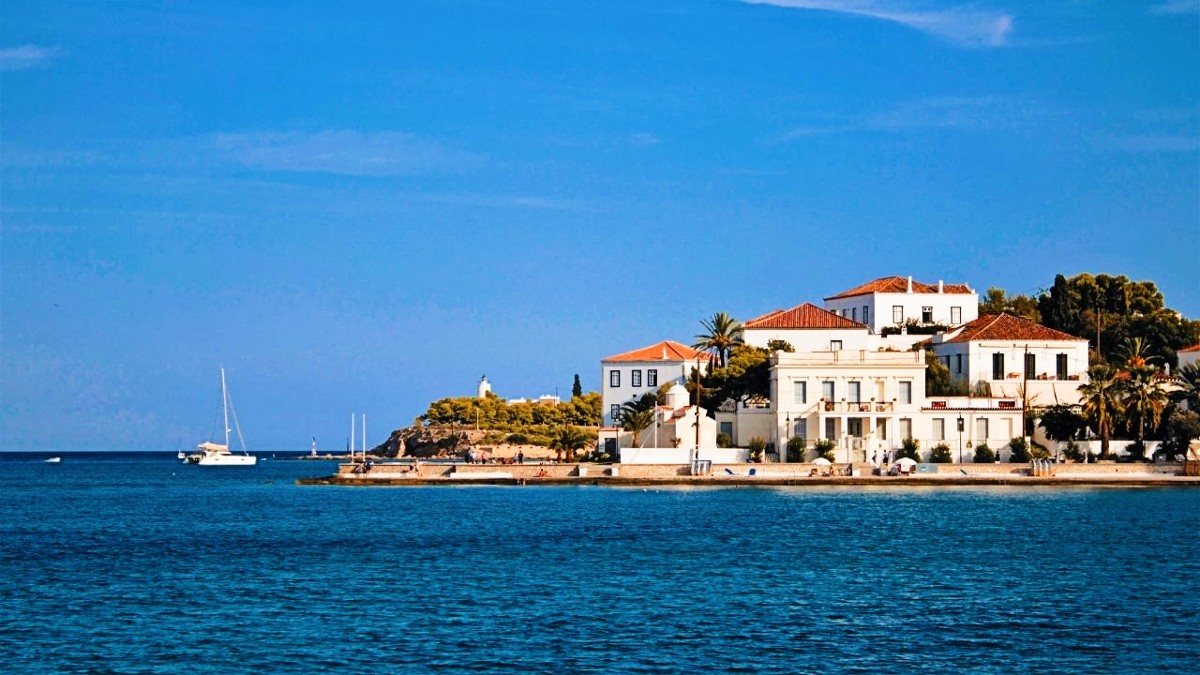 Here are the best things to do in Spetses:

Andros is the closest island to Athens from Rafina port, which is located an hour out of the city center. Fast ferries from Rafina to Andros take one hour, while conventional ferries take two hours.

Andros is the second largest island in the Cyclades, after Naxos. It’s a wild, mountainous island with over 170 beautiful beaches, lovely small villages and many things to do. 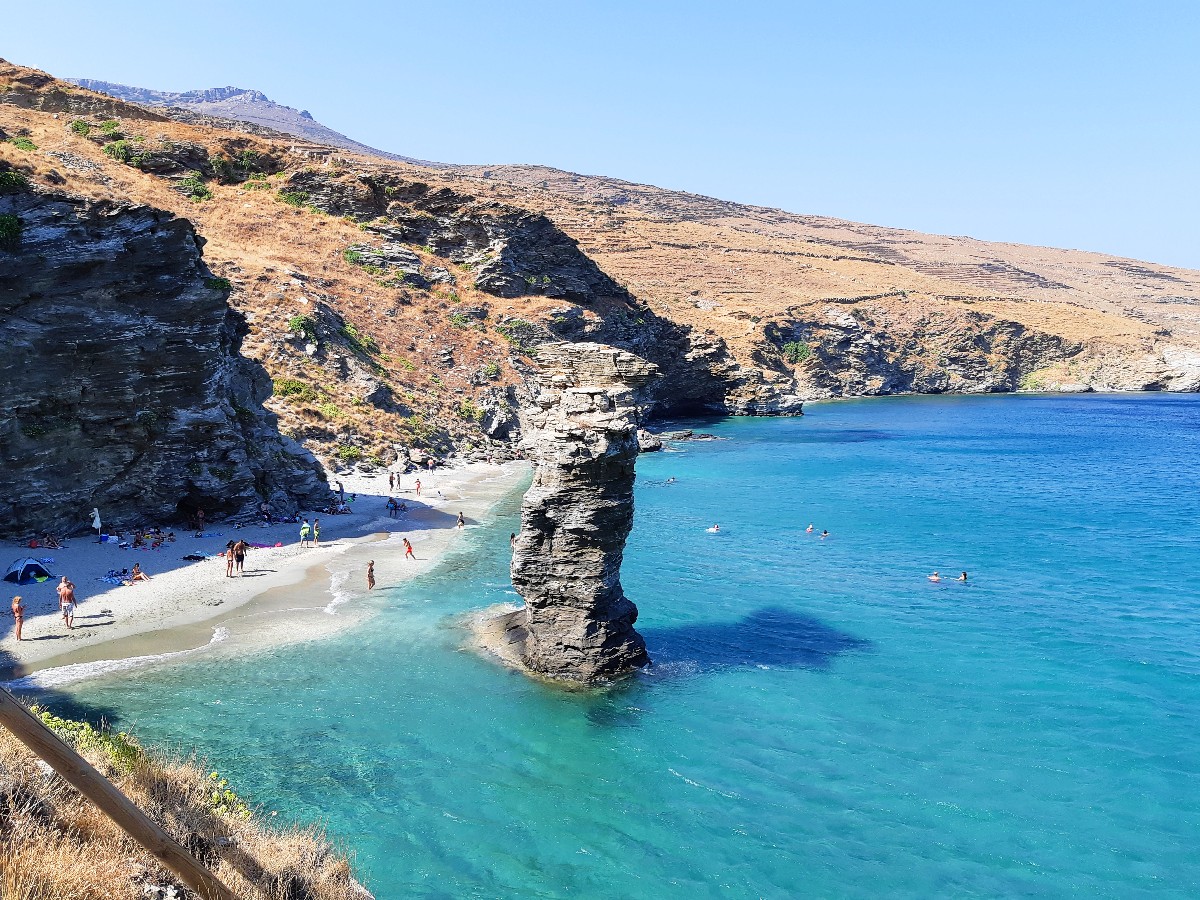 Here are a few of the highlights in Andros:

You can easily spend a week in Andros, and not run out of things to do. For more information, check this article on the best things to do in Andros Greece.

Also, check out our book on Andros and Tinos in Greece!

Tinos is another beautiful island in the Cyclades. It only takes a couple of hours to get there on the ferry from the port of Rafina, which is an hour out of central Athens.

Tinos is best known as a religious destination, and an island with dozens of quaint traditional villages. Add to this several stunning beaches, a unique marble crafting heritage and local culinary traditions, and Tinos can easily become your next favourite Greek island. 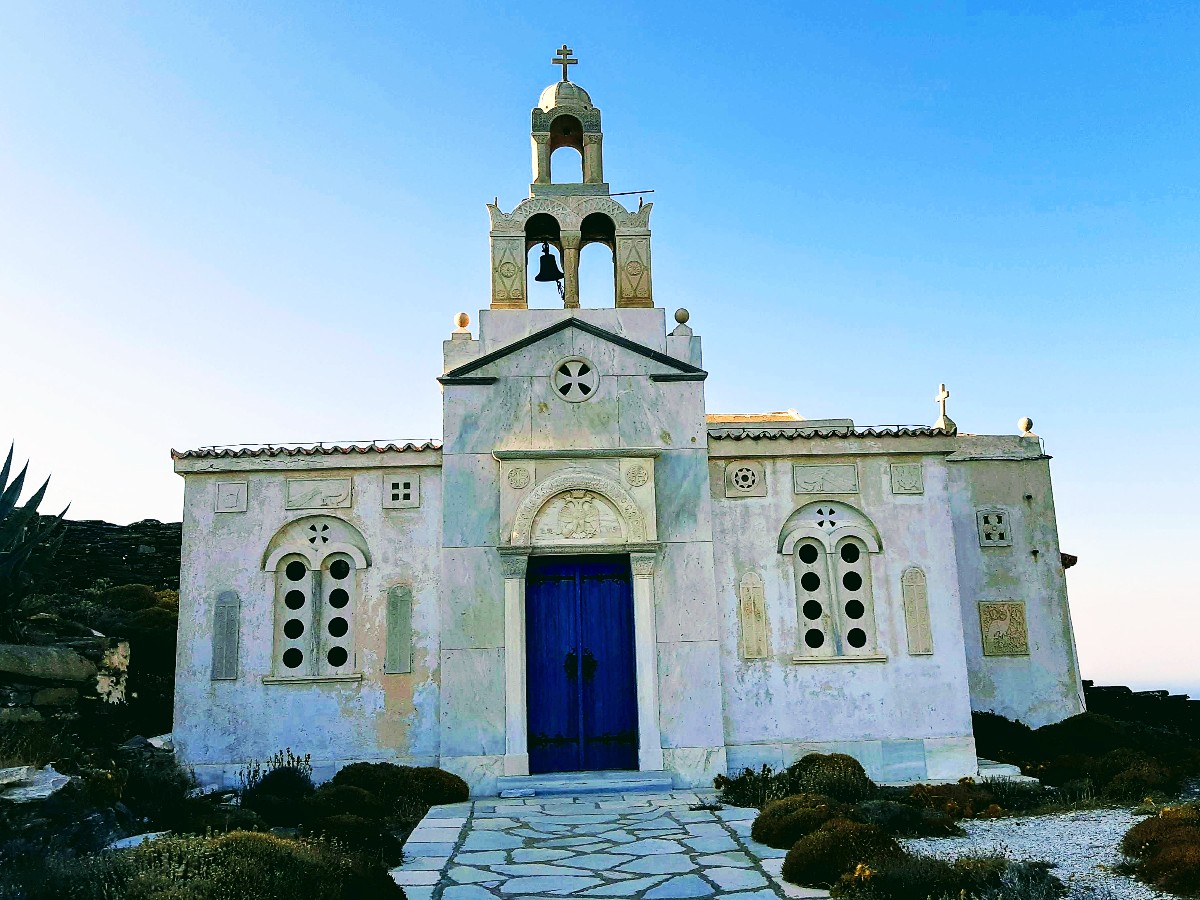 Here are a few of the best things to do in Tinos:

Overall, Tinos is a wonderful place to explore and absorb the local culture. Here is more information on what to do in Tinos Greece.

Note: Andros, Tinos and Mykonos are on the same ferry line, so you can easily combine them on an island hopping trip.

Kea, also known as Tzia, is the closest Cycladic island to Athens. The ferry from Lavrio port, which is located close to Cape Sounion, only takes one hour to get to Kea.

Kea doesn’t look like most of the other Cycladic islands. Instead of the iconic white-washed houses and blue-domed churches, you will see buildings made of stone, painted in earthy colours. 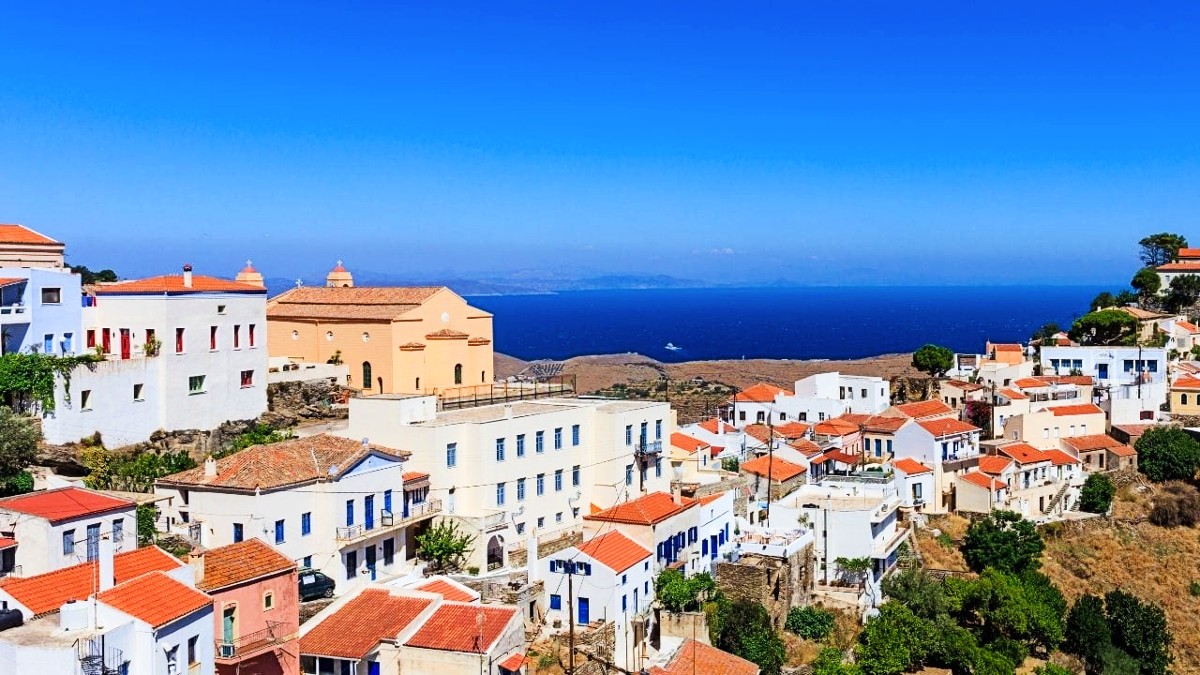 Here are a few of the highlights of Kea:

Despite the fact that Kea is so close to Athens, it has kept its traditional character. This makes it an interesting place to visit, either for a day trip or for longer.

If you are familiar with the geography of Greece, you may be surprised to find Milos in the list of islands near Athens. Yet, the beautiful island is only a short 40-minute flight from the Athens airport. 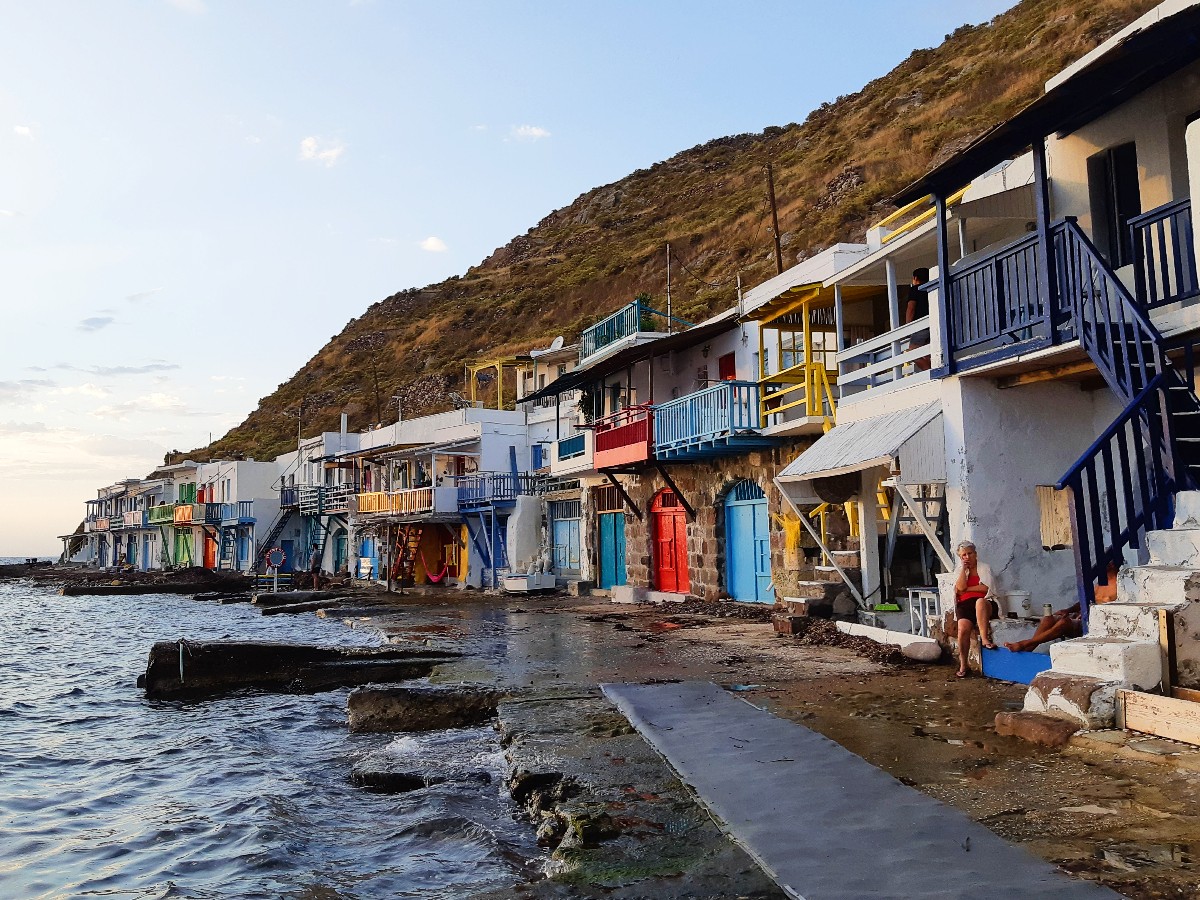 Milos offers a great mix of activities. Here are the best things to do in Milos:

For more information about Milos, you can check out our book on Milos and Kimolos, available on Amazon.

Santorini is one of the most iconic Greek islands, and one of the most popular tourist destinations year round. Located in the Cyclades, it’s only a short 45-50 minute flight from the Athens airport. 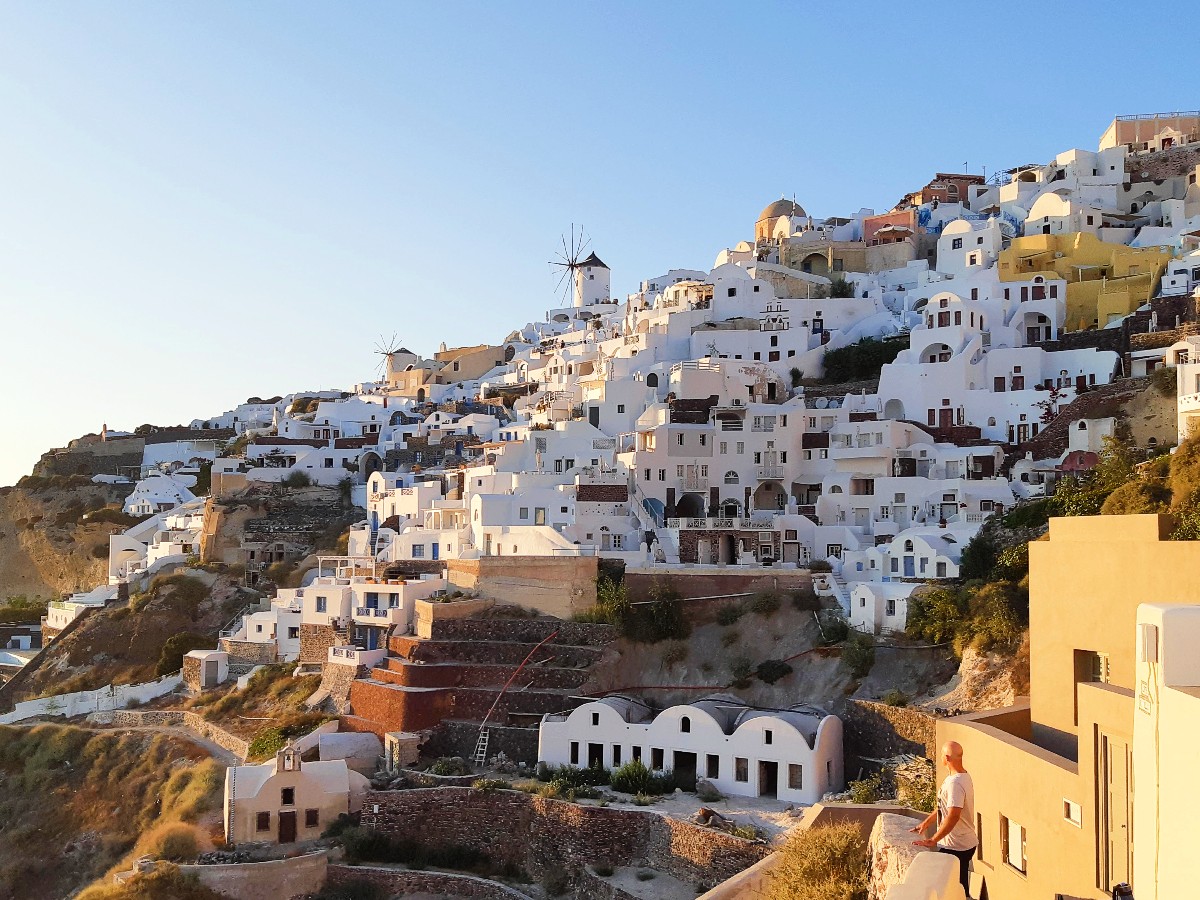 Santorini offers a mix of activities, from beaches and relaxed nightlife to history and culture. Here are just a few of the best things to do in Santorini:

For more tips on Santorini, have a look at these other articles:

Mykonos is one of the most popular islands in Greece, and for good reason. It’s well known for its wild nightlife, stunning sandy beaches and sprawling capital town.

There are several ways to get to Mykonos from Athens. These include a 50-minute flight from the Athens airport, and a 2.5-hour fast ferry from the port at Rafina. 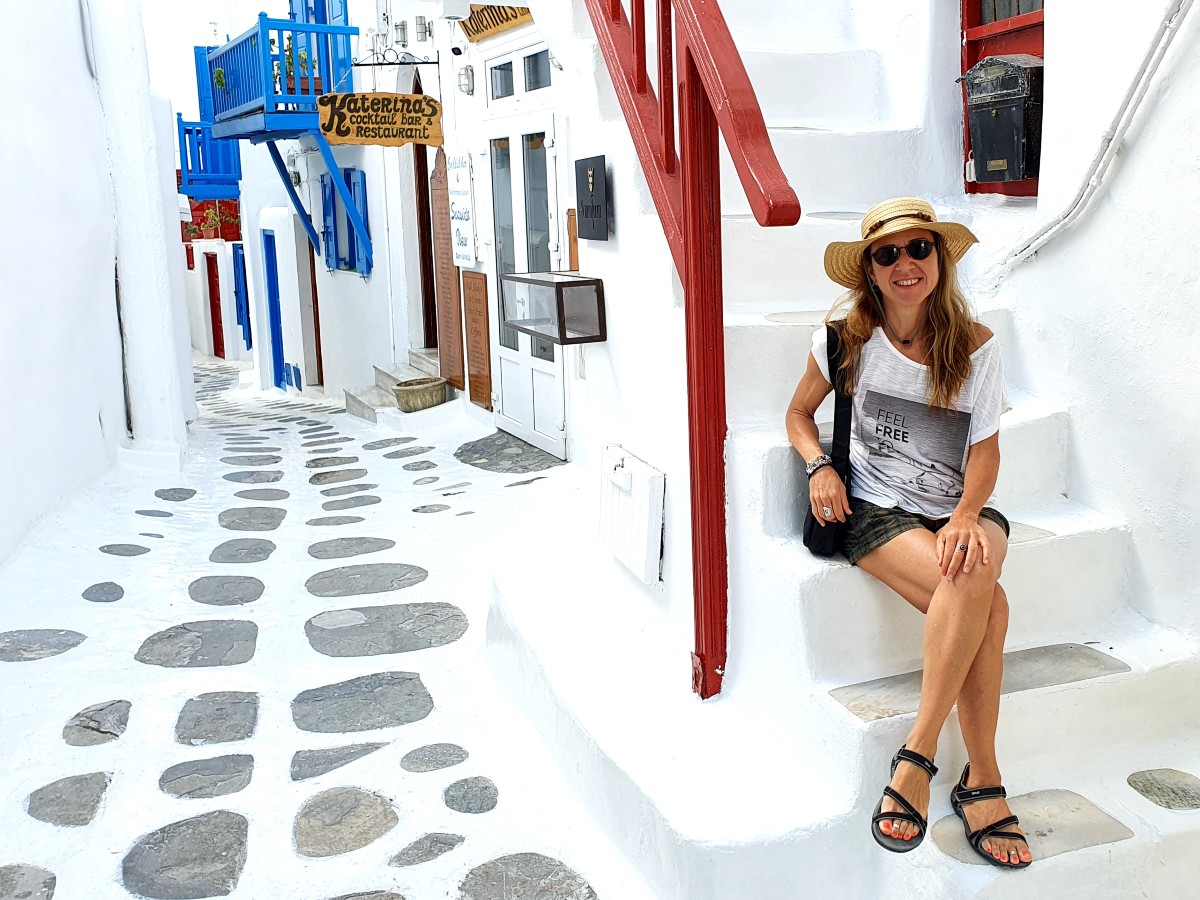 Here are the best things to do in Mykonos:

For more information on Mykonos and Delos, check out these articles:

How to get to the ports in Athens

As mentioned earlier, Athens has three main ferry ports: Piraeus, Rafina and Lavrion. Here is a map showing the ports in Athens in relation to the airport and the city center. 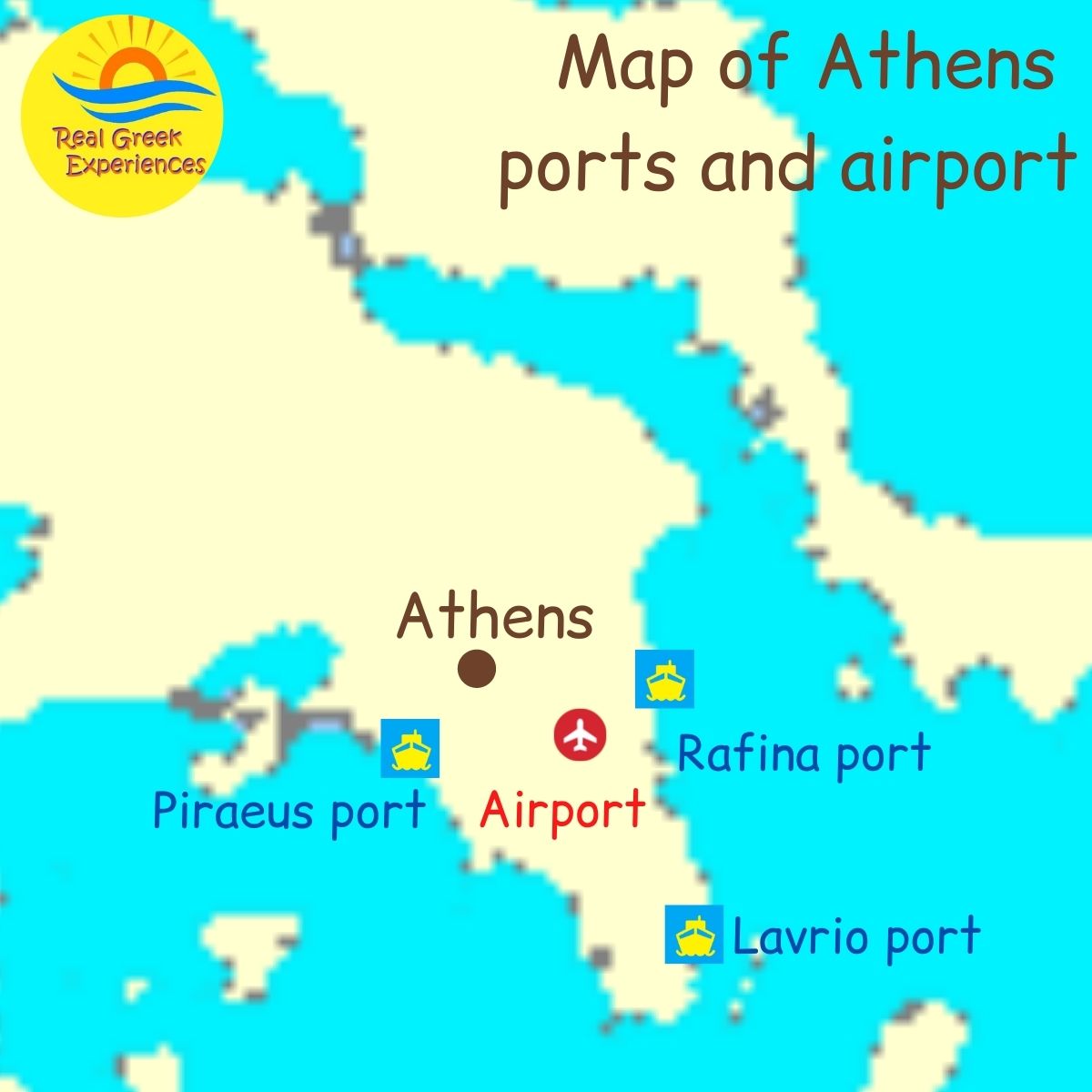 Piraeus port is the main port in Athens. It is located about 10 kms south-west from Syntagma Square in central Athens.

Piraeus is a big, chaotic port with several gates. You will need to check which gate your ferry is departing from, so you can make it there on time. 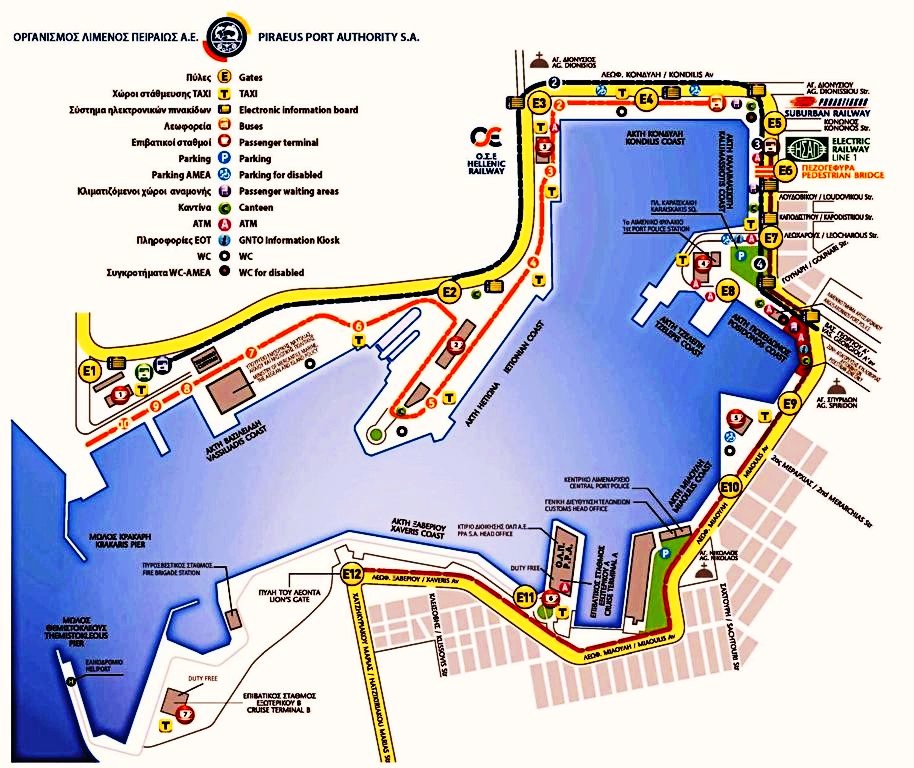 The easiest ways to get to Piraeus is on the Athens metro, or on a pre-booked taxi. The taxi will drop you off near your departure gate, so it’s much better if you are carrying lots luggage.

The metro from Monastiraki station takes about 25 minutes to get to Piraeus metro station. Depending on which gate you are departing from, allow at least an hour to get your ferry.

Rafina is the second largest port in Athens. It is located about 32 kms from the centre of the city. It’s a small port, that is a lot more user friendly than the bustling Piraeus. 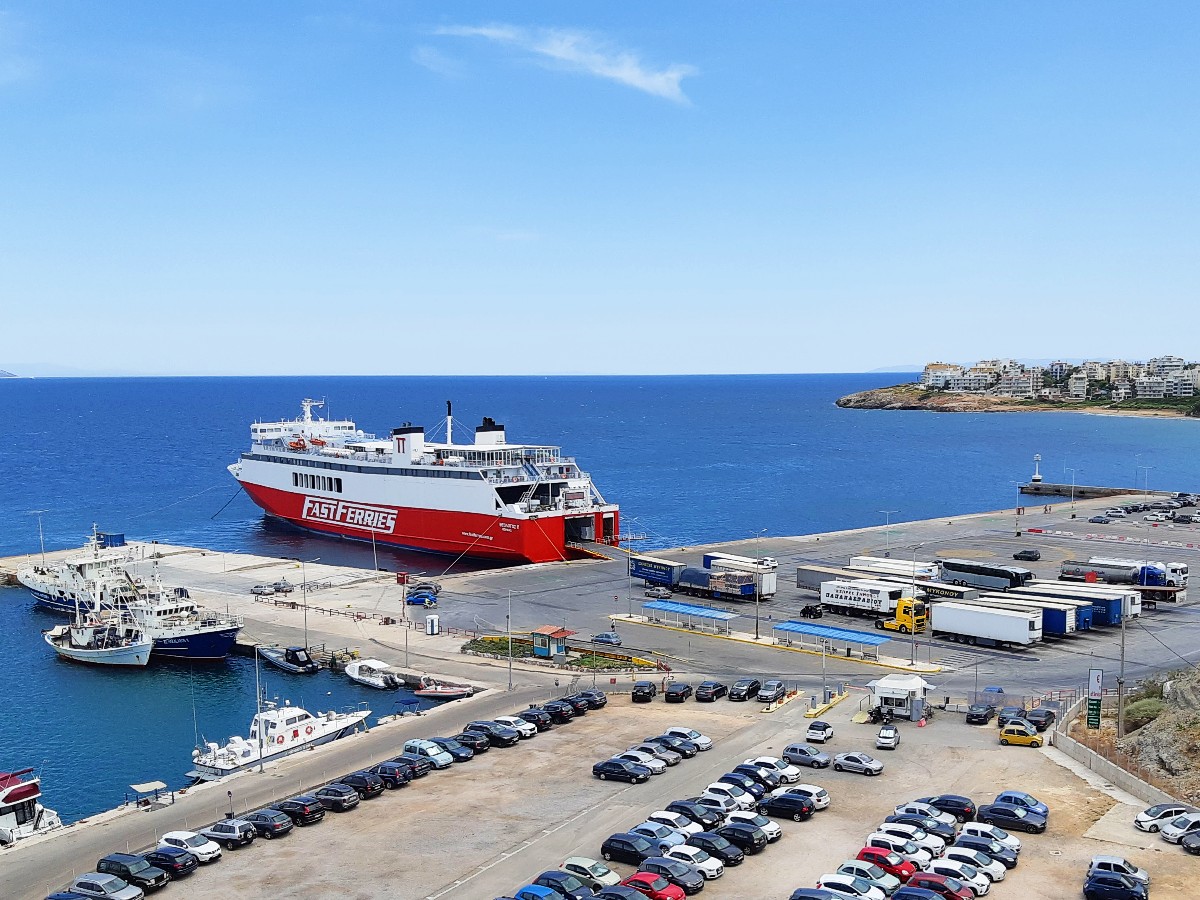 To get to Rafina, you will need to take a KTEL bus from Nomismatokopio metro station, on the blue line. Alternatively you can pre-book a taxi. This should take an hour or a little longer from central Athens, and would cost about 30-40 euro.

If you are catching a ferry right after you’ve landed at the Athens airport, you’ll be pleased to know that Rafina is much closer than Piraeus. A taxi from the airport would take around 20 minutes.

Lavrio port is located about 60 kms south of Athens. It’s the most remote port in Athens, and getting there from the city centre can take you well over an hour, depending on traffic.

You can get to Lavrio on a KTEL bus, which departs from Nomismatokopio metro station, on the blue line. The easiest way is to book a taxi, which would usually cost about 50-60 euro.

Allow at least an hour to get to Lavrio on a taxi, or longer if you are going by bus. 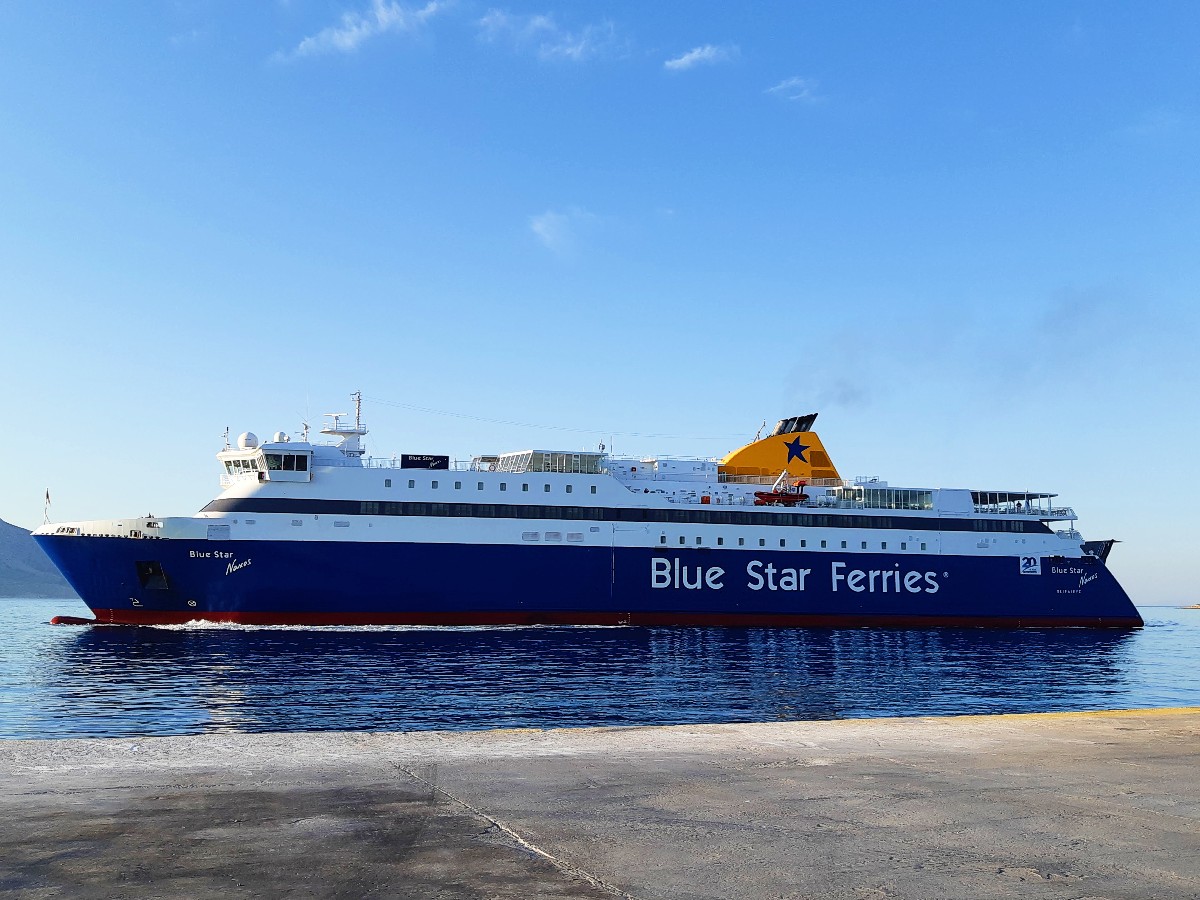 What islands are nearest to Athens?

The islands that are geographically closest to Athens are the Saronic islands, especially Aegina and Agistri.

Which is the best island near Athens?

Some of the best islands near Athens include Aegina, Hydra, Spetses, Andros, Tinos and Santorini. It depends what you are looking for!

What islands are a day trip from Athens?

The best islands for a day trip from Athens are the Saronic islands, Aegina, Agistri, Poros, Hydra and Spetses, and the Cycladic island of Kea or Tzia.

Which Greek island is easiest to get to?

Many islands in Greece are easy to get to. Santorini, Mykonos, Crete, Rhodes, Kos and Zakynthos are among the easiest islands to get to. There are international flights from several European airports, and domestic flights from the airport in Athens.

What is the best time to visit Greek islands?

The weather in Greece is warmer between Greek Easter, which is in April or May, and late October. July and August are the warmest months, but also the most crowded and expensive. Overall, if you are interested in spending time on the beach but don’t want the crowds, the best months to visit the Greek islands are June and September.

How many Greek islands are there?

Greece has 119 inhabited islands, which are located east, south and west of mainland Greece. Here is an introduction to the different Greek island groups. 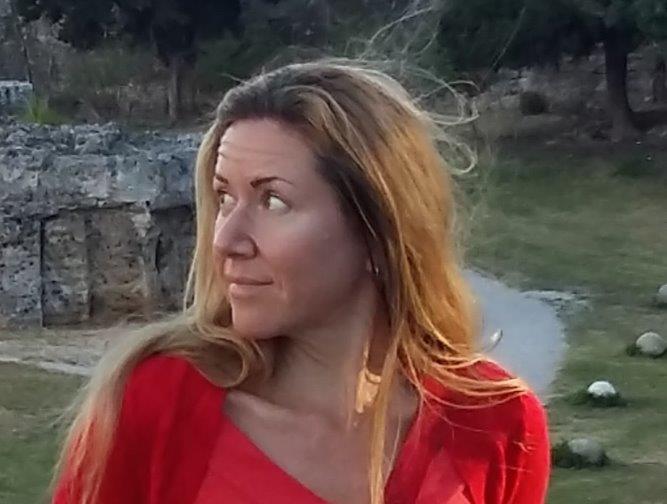 Hi! I’m Vanessa from Athens and I love travelling around the Greek islands. If you only have a few days in Greece, these islands close to Athens are great destinations to visit. For more information and news about Greece, follow my FB page and FB group.