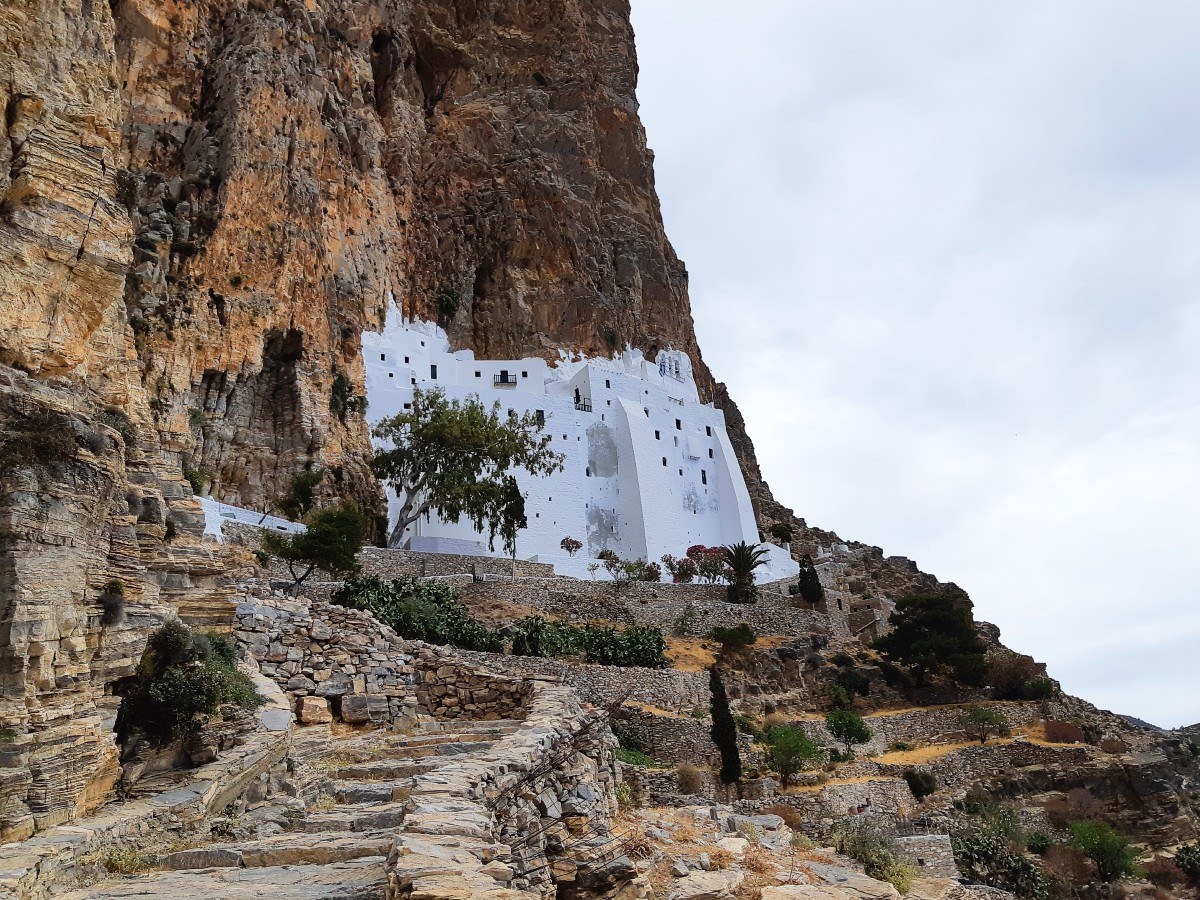 Here’s how to get to Amorgos island in Greece. Includes flight information and ferry routes from the port of Piraeus near Athens and other islands in the Cyclades.

Where is Amorgos island?

Amorgos is one of the Cyclades group of islands, which are located in the Aegean Sea, to the east of mainland Greece. It is geographically close to the better known Santorini and Naxos. 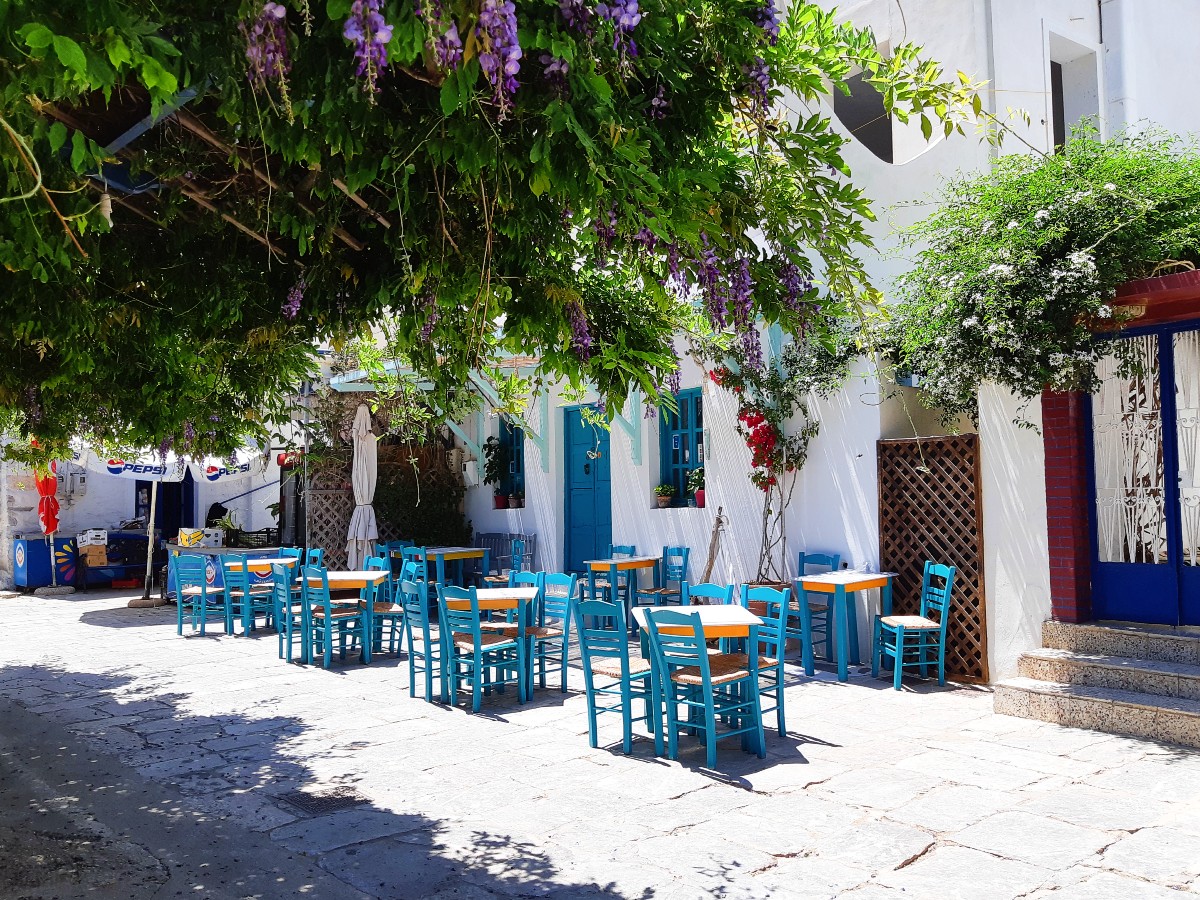 Amorgos largely became famous because of a French movie which was partially filmed here, called “The big blue”. The film put Amorgos on the map as a dream destination, especially for French and Italian tourists. Here are a few more movies about Greece.

Visitors looking for relaxed, laid-back holidays will love Amorgos island. You will find rugged landscapes, quiet hiking paths, a few wild beaches, and some of the best diving in Greece.

There are three main towns on the island – the picturesque capital, Chora, the port of Katapola and the port of Aegiali. In addition, there is a handful of little villages, where you can enjoy the traditional Cycladic architecture with the white-washed houses.

Reaching Amorgos can be challenging if you don’t know how. This is why I’ve put together this guide on how to get to Amorgos island in Greece!

How to get to Amorgos by ferry

There is no airport on the island. Unless you are on your own sailing boat, this means that you will need to take a ferry to Amorgos. 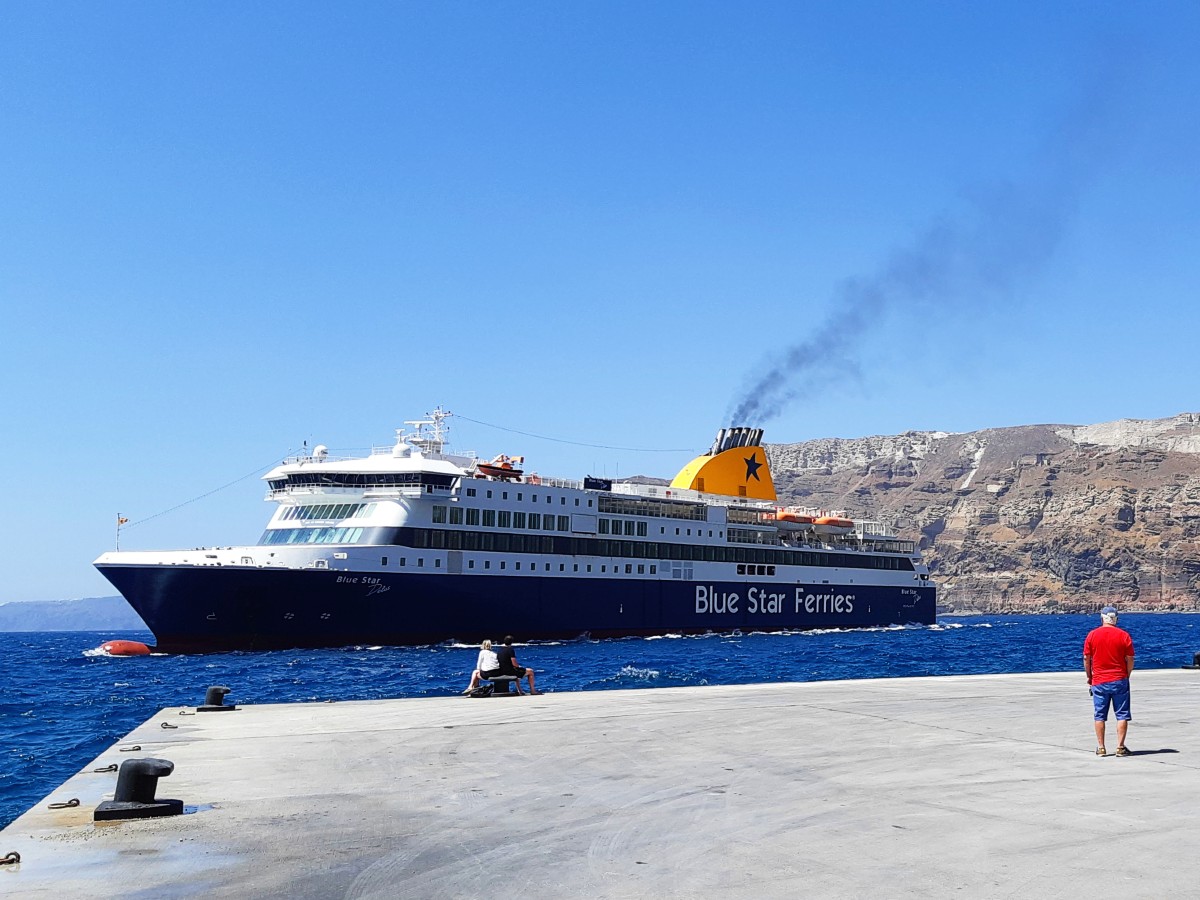 Most Greek islands only have one major port, but Amorgos has two: the port of Aegiali, and the port of Katapola. You will have to be careful when booking your ferry tickets, as the two ports are about a half-hour drive from each other.

Ferries to Amorgos depart from the main Athens port, Piraeus, on a daily basis. On the way, they first stop at several other ports.

I use Ferryscanner to compare routes and book my tickets to the various Greek island destinations. If you use this link to book your tickets, I will get a small commission which helps me run this website!

Ferries from the port of Piraeus in Athens to Amorgos

Ferries running the Piraeus – Amorgos route are operated by two of the most famous ferry companies in Greece, Blue Star Ferries and SeaJets.

The ferries from Piraeus to Amorgos take several hours. Bring a book, a movie, or something else to pass your time, or just spend an hour or two looking at the blue sea.

In addition, my suggestion for ferry travel in Greece is to bring a few warm clothes. The air-condition on board can get incredibly chilly!

Tip: If you are staying in downtown Athens, allow for plenty of time to get to Piraeus port, either by metro or taxi. It’s best to get to your ferry at least a half-hour before departure, and make yourself comfortable.

Piraeus to Amorgos on the Blue Star Ferries

The Blue Star Ferries are large ferries that carry passengers and vehicles. They have a range of amenities on board, like snack bars, restaurants and showers. 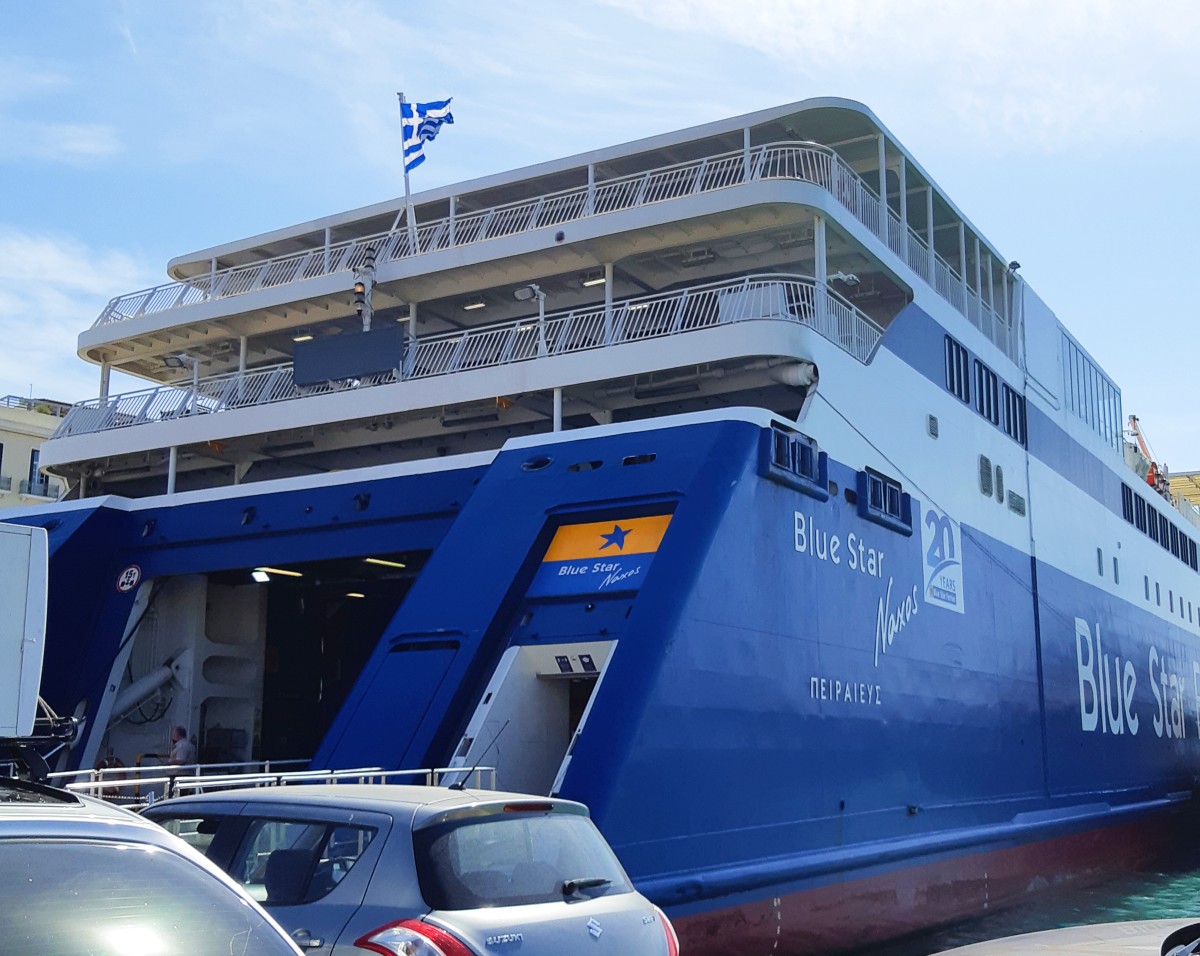 There are several ticket options, from a simple deck ticket to a cabin. Prices start from about 34 euro and vary a lot, depending on the type of ticket.

There are Blue Star routes to both Aegiali and Katapola Amorgos, typically on alternate days. The ferry will first stop at Paros, Naxos and perhaps some other ports.

The duration of the trip from Piraeus to Amorgos on a Blue Star ferry is typically around 8 – 10 hours. This depends on the number of ports of call, and any delays.

The Blue Star Ferries run year round, though there may be fewer routes in the shoulder season and winter. Departure times also vary by time of year. If you are travelling outside peak season, you will probably arrive at Amorgos in the early morning hours.

I prefer to travel with the Blue Star Ferries whenever I can, as their ferries are large, comfortable, and they set the mood for island exploration!

Taking the SeaJets high speed ferry from Piraeus to Amorgos

SeaJets is a company operating many different types of ferries. They are well known for their high speed vessels which only run during summer. 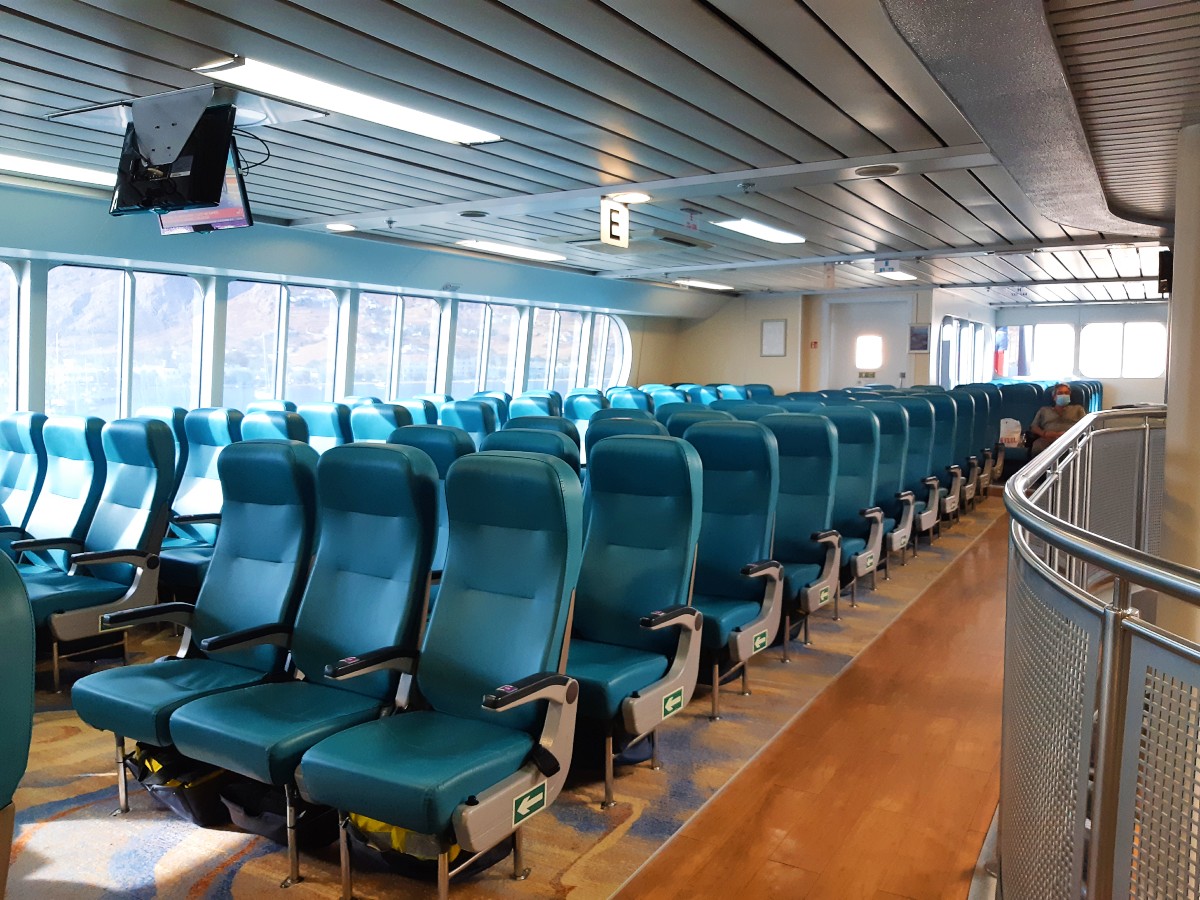 Some SeaJets are large and can carry both passengers and vehicles. Others are much smaller and are passenger-only ferries.

The trip from Piraeus to Amorgos on the SeaJet is typically around 6 – 6.5 hours. On the way, the ferry might stop at Sifnos, Milos, Folegandros and Santorini, but this depends on the season and year.

While the SeaJet takes a shorter time, I would strongly suggest you check the specifications of the specific ferry before you book. Smaller high speed ferries, especially those that don’t carry vehicles, can be a challenge to travel on when it’s windy.

And yes, it can get windy in the Aegean Sea, even in summer! Here is some information on the meltemi winds.

At the time of writing, SeaJets only arrive in Katapola port in Amorgos. Passenger tickets from Piraeus start from about 70 euro.

Best way to get to Amorgos from abroad

Understandably, the long ferry ride from Piraeus would discourage many people from visiting. However, there are other ways to get to Amorgos, without including Athens in your trip. 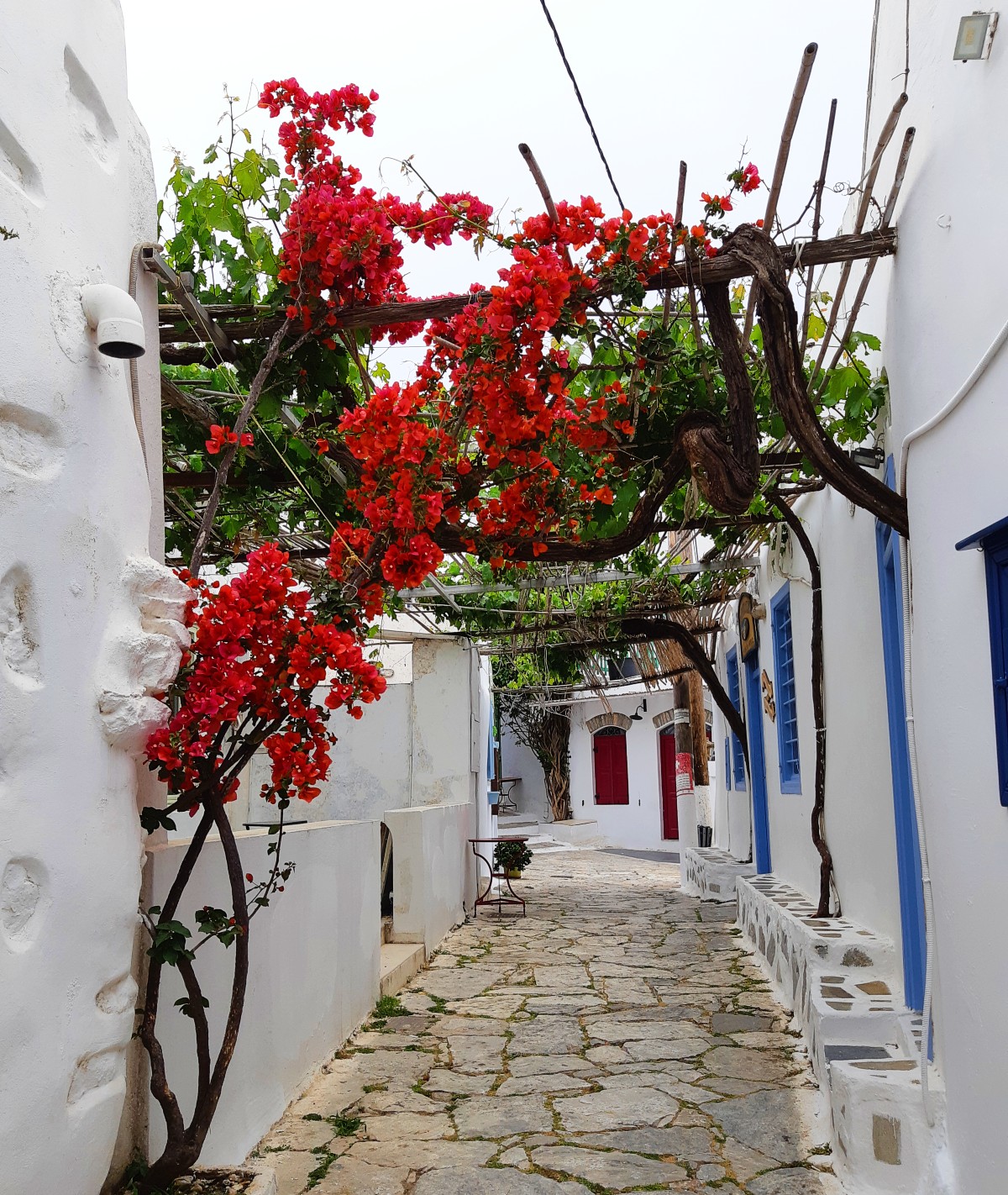 The best idea is to search for flights to another island in the Cyclades. From there, you can take a short ferry trip to Amorgos. This would minimize travel time and give you more vacation days.

There are currently three Cyclades islands with international airports, which are well connected with Amorgos: Santorini, Mykonos and Paros. During summer, dozens of flights arrive from many European countries.

Santorini is only 1 hour and 15 minutes away from Amorgos, on the high speed ferry. Similarly, the trip between Mykonos and Amorgos is just over a couple of hours.

Finally, there are ferries from Paros reaching both Katapola and Aegiali ports. This route takes between 3 and 4 hours.

Another option is to connect at the Athens airport, hopping on a quick onward flight to Milos, Naxos or Syros, which all have small, domestic airports. From there, you can take the ferry trip to Amorgos.

Amorgos is a fantastic destination to include in a Greek island-hopping itinerary. Apart from the islands mentioned above, it is also connected to a few more of the Cyclades, like Sifnos, Serifos, Ios and Folegandros. 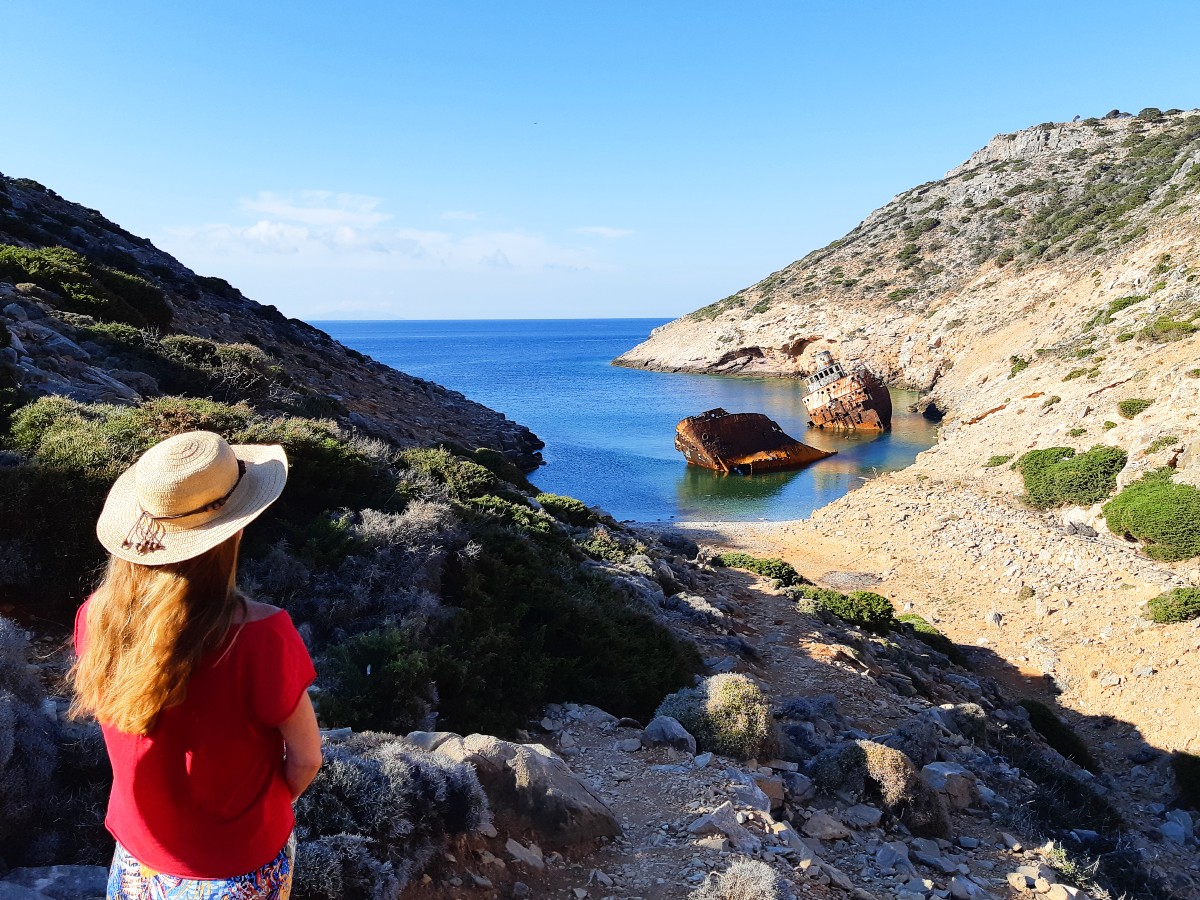 In addition, there are daily connections with the Small Cyclades, namely , Iraklia, Schinoussa and Koufonisia. These tiny islets have very few permanent residents. They are all ideal if you are just looking to swim, relax and get away from it all.

Finally, there are less frequent connections between Amorgos and some of the Dodecanese islands, like Astypalea, Patmos, Leros and Kos. If you wanted to explore more than one island groups in Greece, here’s your chance!

The only drawback? These ferries will most likely run at inconvenient times of the night, though departure times vary. The duration of most of these trips will be at least 4 – 5 hours.

Naxos, Amorgos and the Small Cyclades

The legendary “Express Skopelitis” boat runs the route between Amorgos, Naxos and the Small Cyclades on a daily basis. It reaches both Katapola and Aegiali Amorgos, before it sets off for its itinerary around the small archipelago. 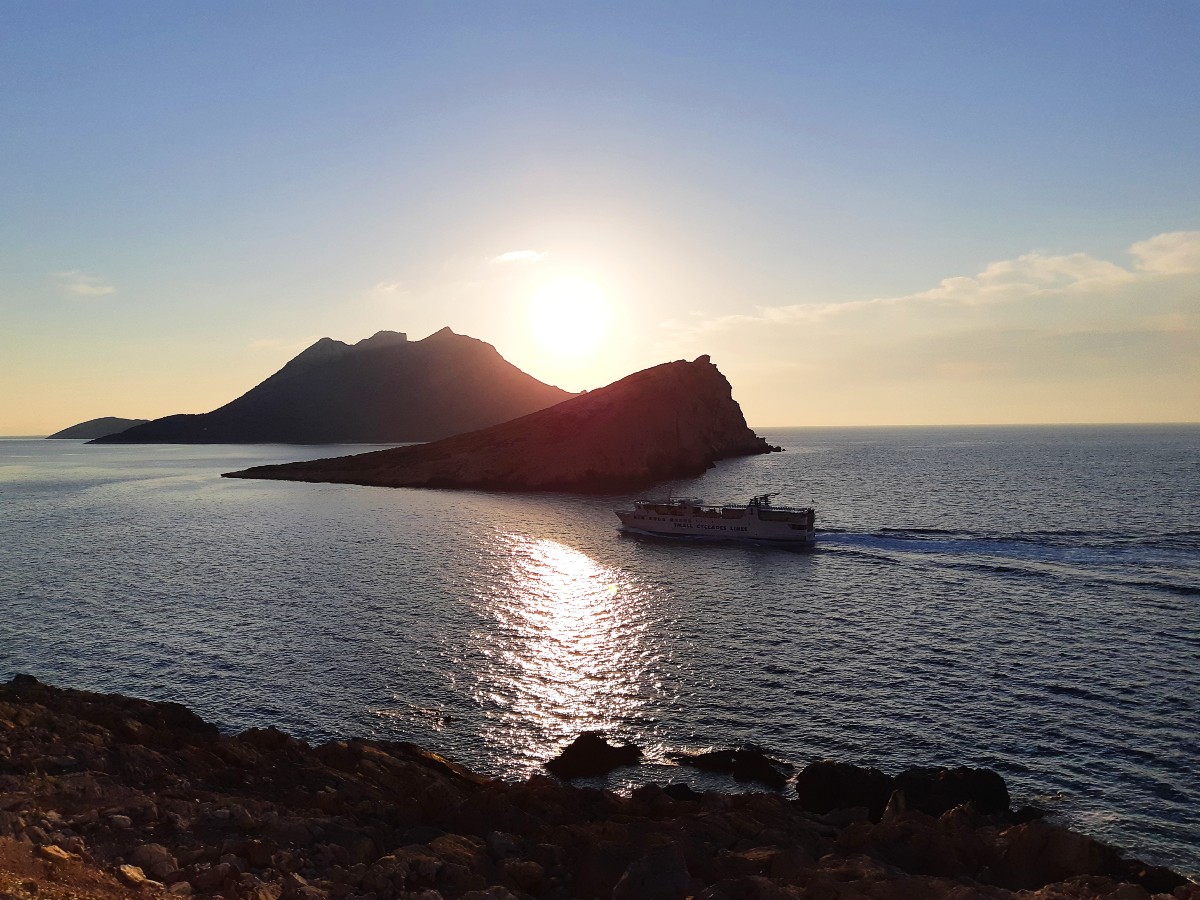 Don’t let the name fool you – the Express Skopelitis is a really slow ferry. Yet, it provides an invaluable year round service to the permanent residents of these remote islands. I support it whenever I can!

On some years, Skopelitis offers Sunday services to Santorini and Ios. It won’t be the fastest option, but it will definitely be the cheapest!

Which of the two ports in Amorgos is better, Aegiali or Katapola?

As mentioned above, Amorgos is one of the few Cyclades with two ferry ports. Generally speaking, there are more routes running to / from Katapola compared to Aegiali. 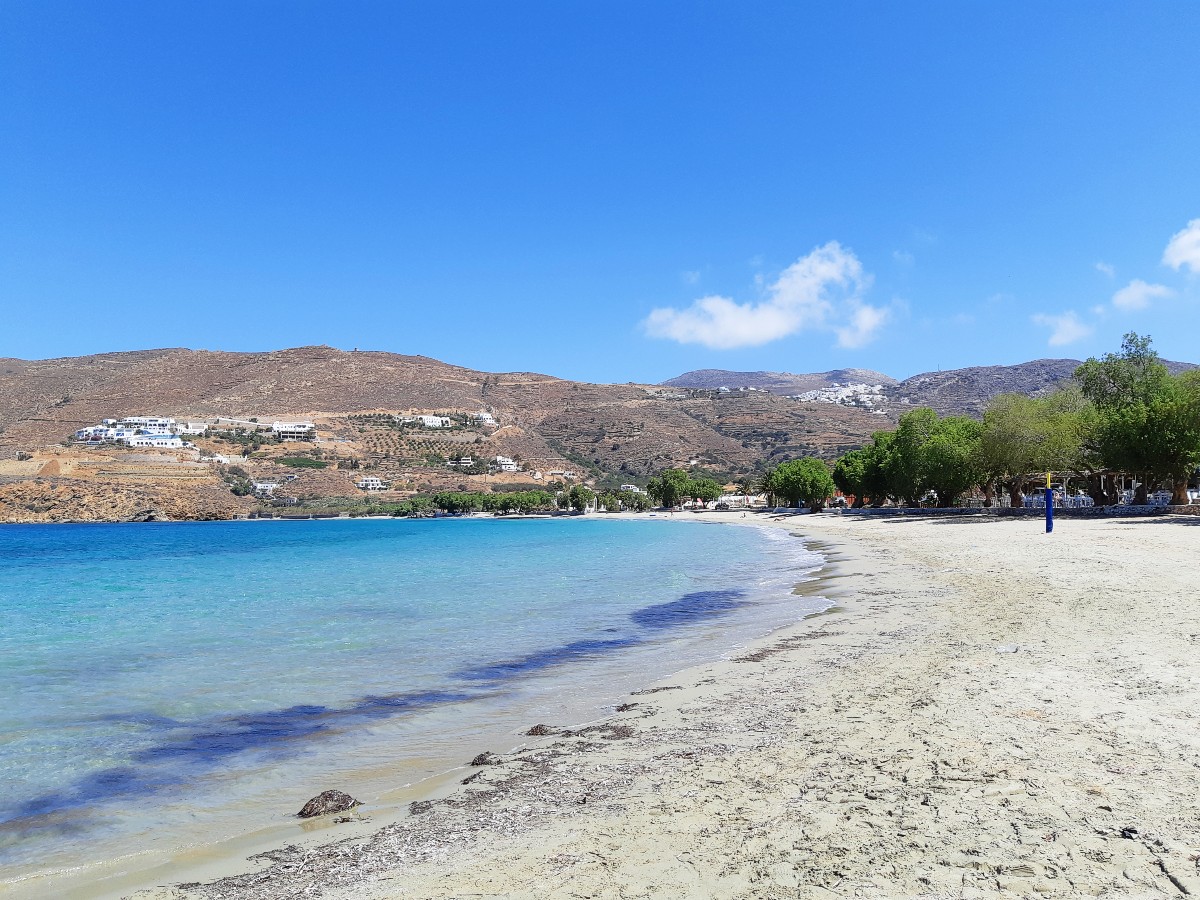 Katapola Amorgos is the most spread out of the 2 ports. You will find many hotels and rooms to let, as well as cafes, restaurants and shops. There is also a town beach, but it’s not so great.

Aegiali, to the north of the island, is smaller than Katapola. It’s a resort village, with a long sandy beach, ideal for children. There are a few rooms to let, tavernas, and some of the island’s legendary beach bars.

When I visited Amorgos, I enjoyed staying in Aegiali. People who are not planning to rent a car will probably be better of in Katapola, which is also closer to Chora, the main town.

Should I rent a car in Amorgos?

Regardless of where you decide to stay, I would personally recommend renting a car, quad or motorbike in Amorgos. Then you can be independent and see the whole of the island, including the little villages and more remote beaches. 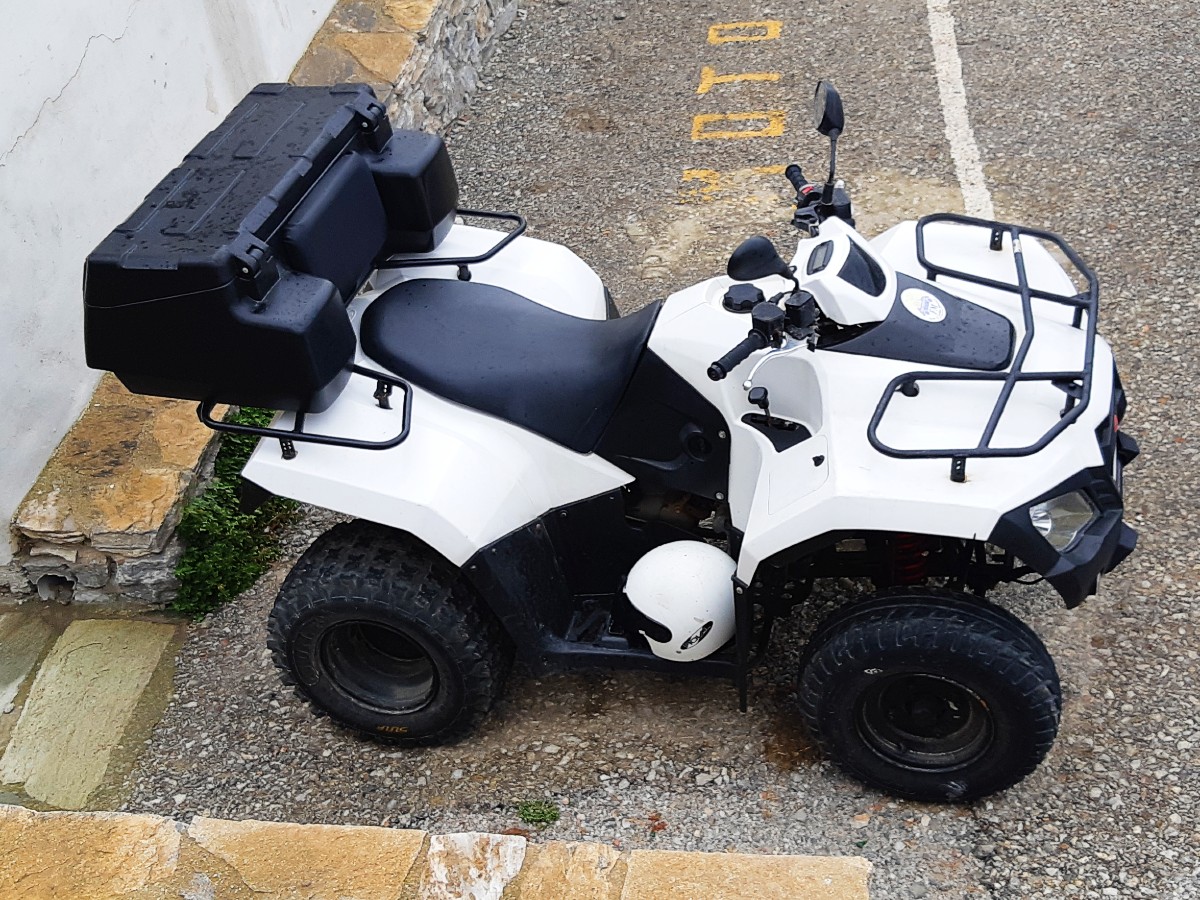 There are car rental agencies in both ports as well as in Chora. Prices depend on the season and the duration of the rental period.

If you’d rather not drive, you could check out the rather infrequent bus services. You can find bus timetables here, though they are not always up-to-date. Alternatively, you can get a taxi.

Finally, Amorgos has several hiking paths, many of which lead to some wild beaches. If you visit during the peak season, you might find that it’s too warm to hike, in which case you can take the small boats that take you around the island. 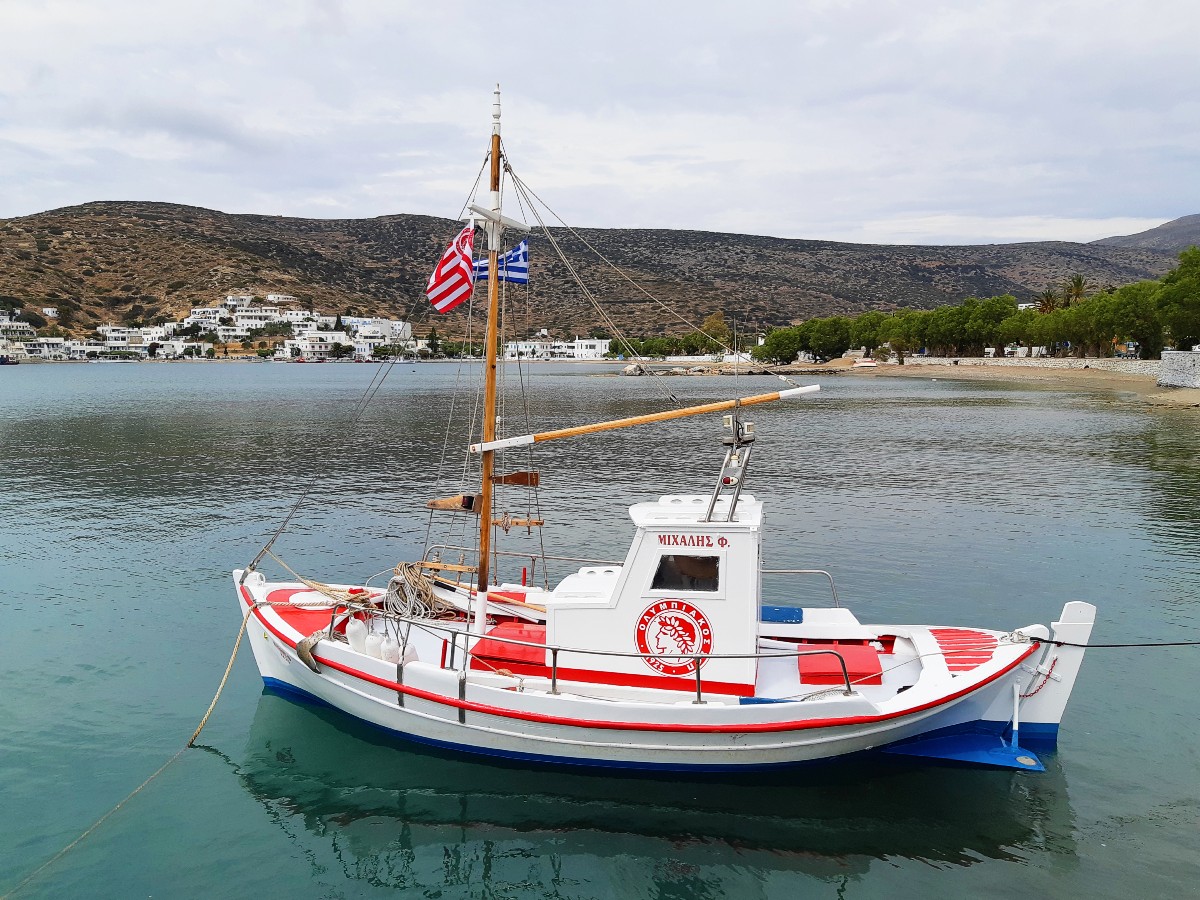 Here are a couple of example itineraries, for people who want to include Amorgos in an island-hopping trip. These are only indicative, as there are many other island destinations to visit! 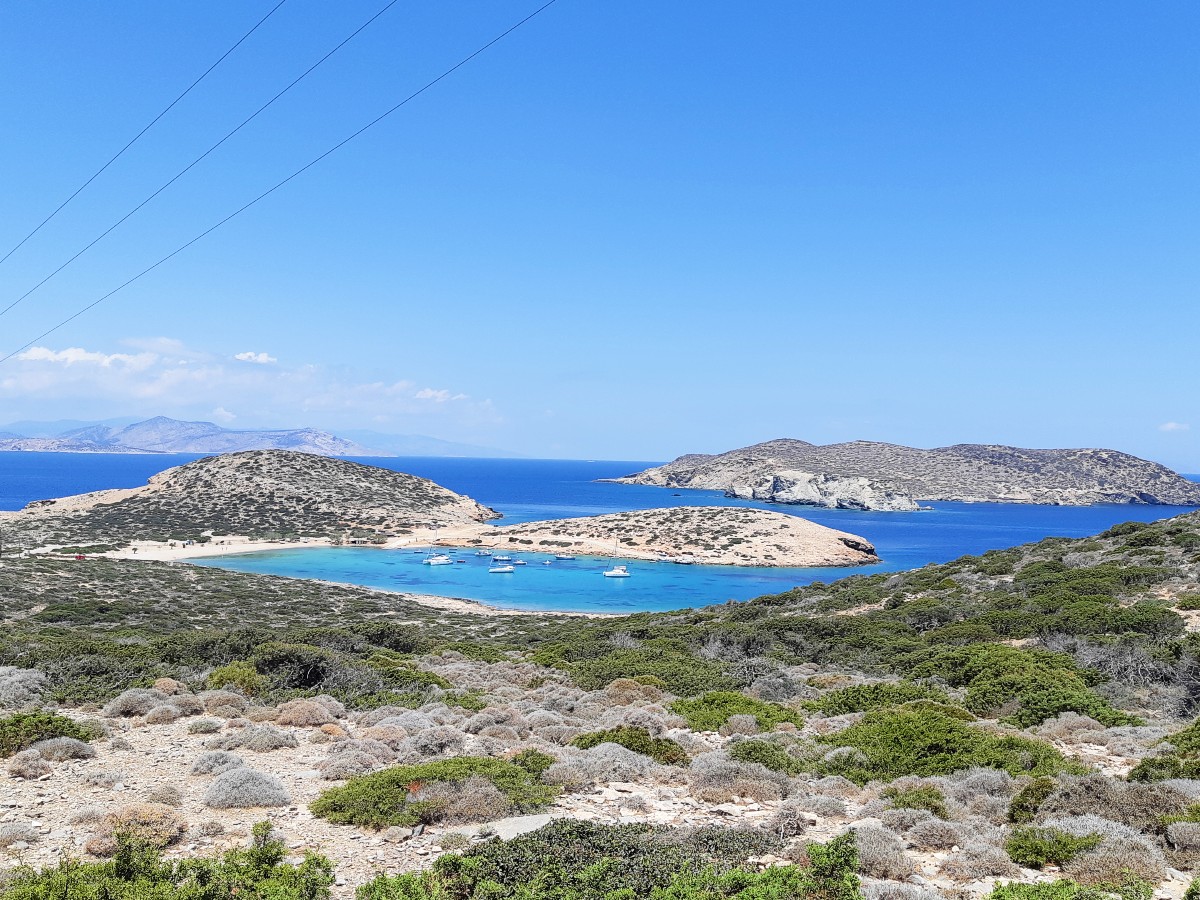 You can check ferry routes and book your tickets at Ferryscanner.

How to get to Amorgos

I hope this article on Amorgos, how to get there, ferry tickets and island hopping has been helpful. If you have any questions, please feel free to ask in the comments! 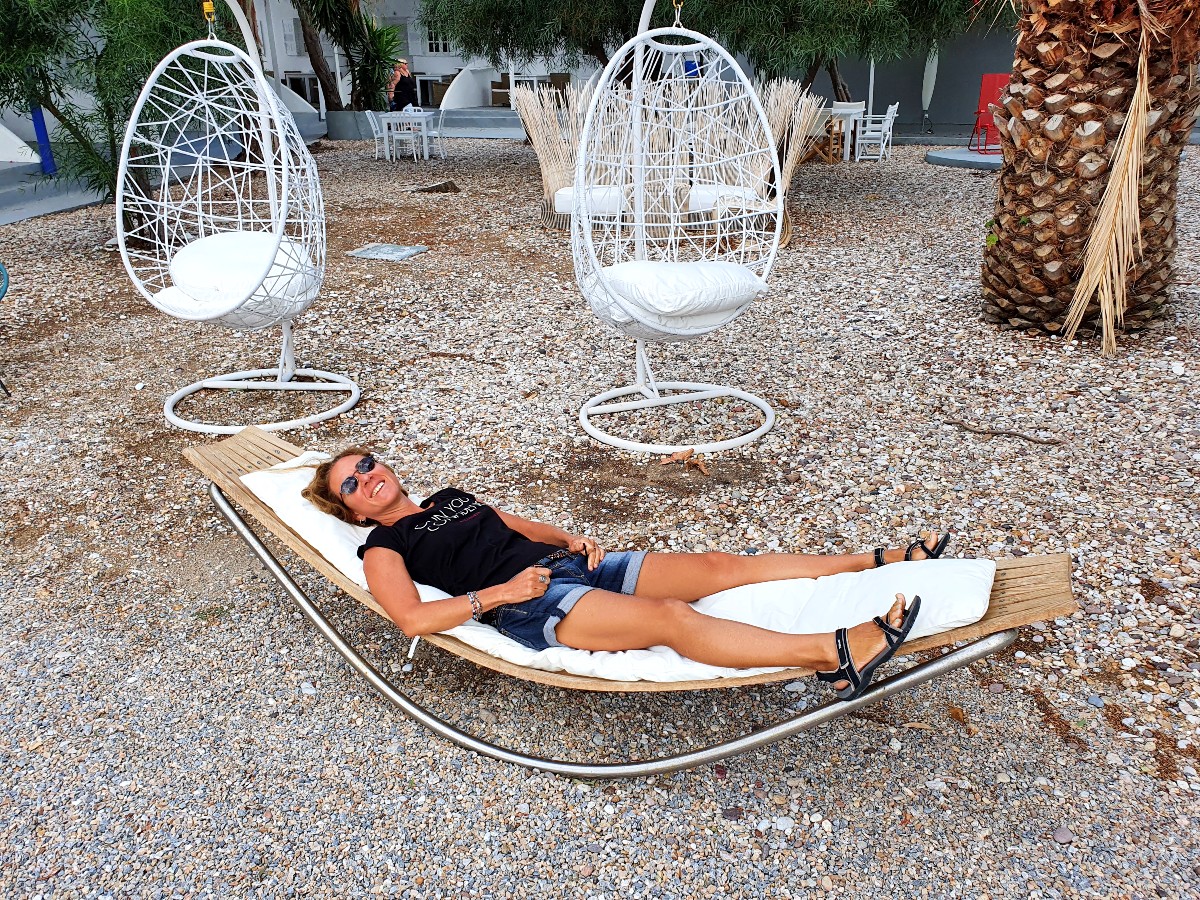 Hi! I am Vanessa, a travel writer from Athens. I love summer on the Greek islands, and I’ve taken literally hundreds of ferries in my life! I hope this article has helped any of you planning to visit Amorgos! For any questions, get in touch on the Real Greek Experiences FB page and FB group.